A week comes and goes, but just like the sun rising in the morning and setting in the evening, #halfwatchtuesday comes around again!! I, for one, enjoyed Omair and his pressing insight into the online exclusive. I’m sure the whole of Edinburgh is aware when he misses out on that said exclusive piece. Following on from this, I thought I might approach a topic that has equally reared its ugly head, particularly from my own personal experience. This idea centers not so much on the concept of suffering from ‘watch fatigue’, but certainly one of being ‘horologically uninspired’. As is so evident by the title, eloquently exclaimed by a certain Natalie Imbruglia.

(Editors Note: how uninspiring an Ozzy referencing another Ozzy lol, at least she can sing, Nic we have the video in our vault, Nic, Lycra, Elvis wig…..not pretty.)

So, what do I mean by ‘horologically uninspired?’ Well, if you’re reading this article, then I would be relatively safe in assuming that you have an interest in watches. If that assumption is correct, then I would also be safe in assuming that one has an interest in not only looking at watches, whether pressed up against the glass window of your local AD or on platforms such as Instagram but also taking photographs of one’s own pieces. It is more the latter that I’ve personally been affected with.

So how does this happen, one may ask? Well, I wholeheartedly feel that this is something that can happen to anyone. From the relative watch novice to the Instagram giant with 000’s of followers, the almost automaticity of taking and perfecting photos can take its toll. Now I’m not saying folk don’t enjoy taking watch photos. On the contrary, it’s the enjoyment of taking and thus the interaction as a result of taking said photos that help to keep that inspiration alive. What I’m saying is that, particularly in my case, the almost repetitiveness can sometimes be inhibiting to inspiration. Further to this, is when it perhaps becomes mundane, lethargic, a chore almost to even contemplate taking the time to take, edit and post a photo that is the true inspiration killer. It’s almost like taking and posting a photo for the utter sake of it, which I feel in any shape or form, is a real shame.

It’s funny that in my own experience, this was exactly the case. I felt that my followers were perhaps tired of seeing photos of the same watches on the same skinny wrist on the same feed all the time. Now, as much as no one would ever say this to me, even if by some small chance this were the case, it’s difficult to shake this concept of never-ending repetitiveness with regards to watch photography. And this is even with having a full-time job as far away as possible from all things horology related. I have got a number of mates within the watch industry itself (far too many to mention but you all know who you are) and I can’t imagine keeping inspired enough to maintaining this crazy hobby of ours when you see the industry from the other side of the fence. From having to achieve and maintain targets and selling pieces you may not have a lot of interest in to having to deal with slightly unsavory people and even having to wear watches only of a specific brand, it must be so hard to then come home and again have to deal with watches outside of work. To you guys and girls, I genuinely salute you.

I guess this is where starting #halfwatchtuesday helped to break down these barriers to inspiration. By not taking oneself overly seriously, taking photos became fun again. It didn’t even really matter about overly editing or ensuring the whole face was showing or ensuring glare was minimized. Heck, these things were almost encouraged. My creative juices were free to flow once again, in the Nile-like expanse of watch photography. It became almost interesting again. No, it did become interesting again. I guess #halfwatchtuesday became just the catalyst I needed to overcome my stagnancy.

Now, I’m sure everyone will have their own reasons if and when this happens. And that’s totally ok. All of us need downtime from all this never-ending social media influx in our lives. Essentially what I am saying though is that these periods of un-inspiration happen to all of us, to the very best of us. Sometimes these breaks are warranted, needed, even encouraged. There are more important things in life than watches after all. All I’m saying is that if and when this happens, that when you do come back (and you will) you will be welcomed back with opened arms. I promise you, it’ll be as if you never left at all….

So, the real bit of the article that anyone really only cares out, the weekly top pictures!! Once again, it’s not just been the standard but the creativity in some of the pictures has been outstanding, which always makes picking the top pictures that much harder. Nevertheless, we have managed to pick some, so here they are! 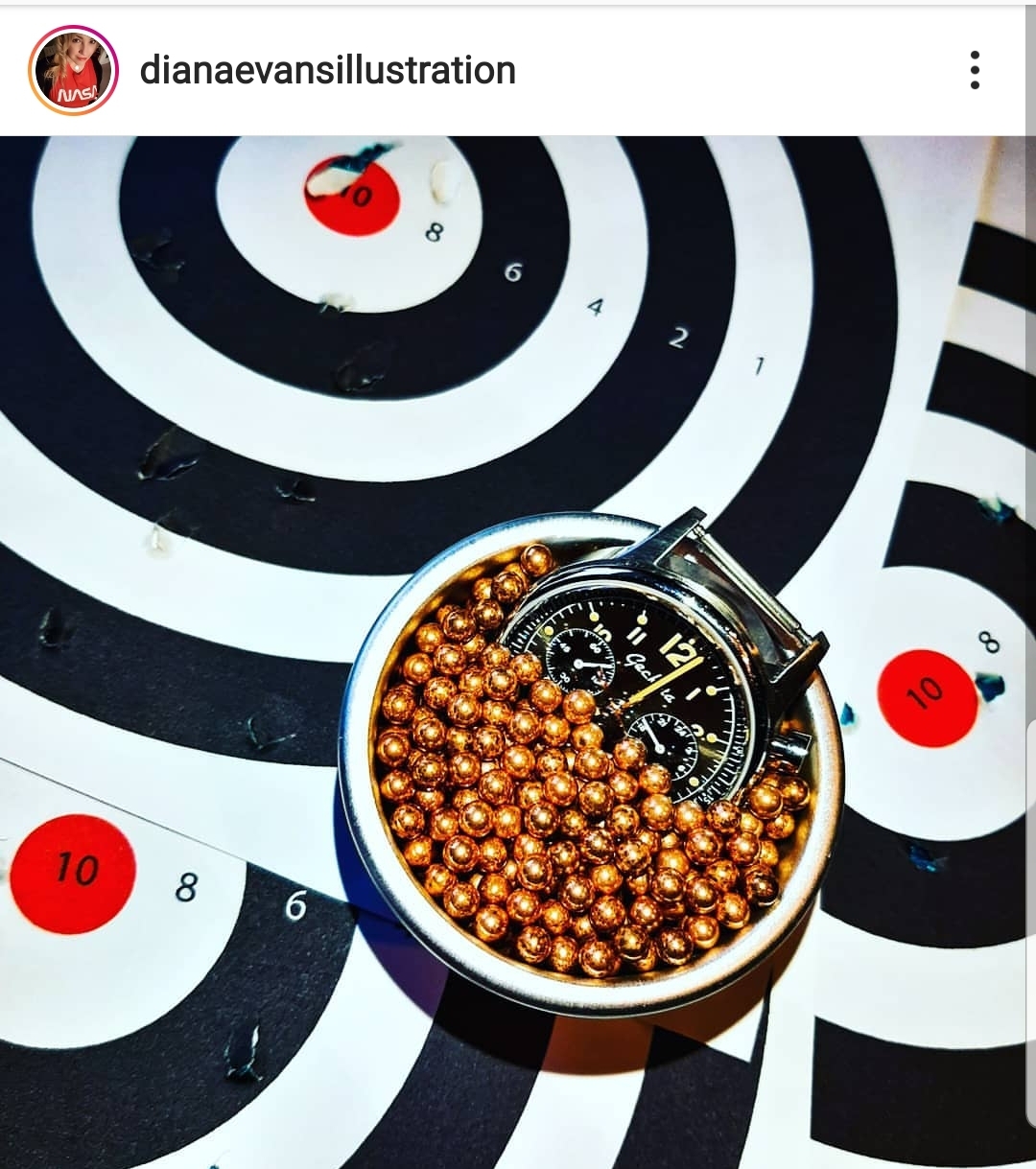 So to start us off this week is perhaps one of the most creatively talented Instagrammers I know of ! Not only have we raved in the past about @dianaevansillustration and this week, we’re going to do it again! Getting in some target practice before the day activities with her Geckota and by the look of it is a pretty accurate shot! Wonderful shot! 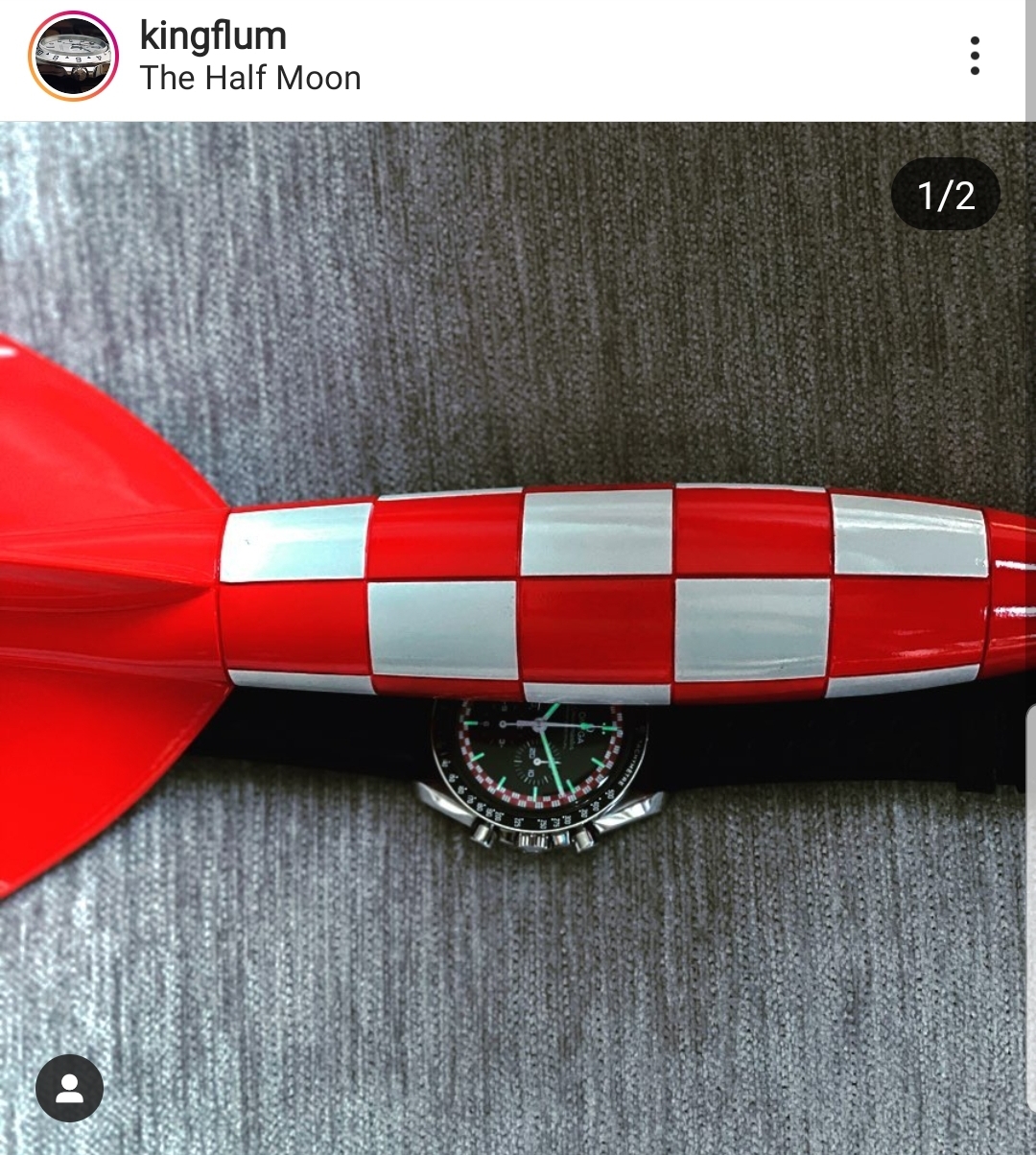 Now, although I’ve never had the pleasure of meeting @kingflum seems to be the type of guy who knows what he’s packing. And by packing, I mean horologically speaking of course. This concept gets literally blown into space when, on #halfwatchtuesday, he lands his giant rocket for us all to witness, no less on his Tintin Speedmaster for good measure! Loving the shot buddy, very quirky. 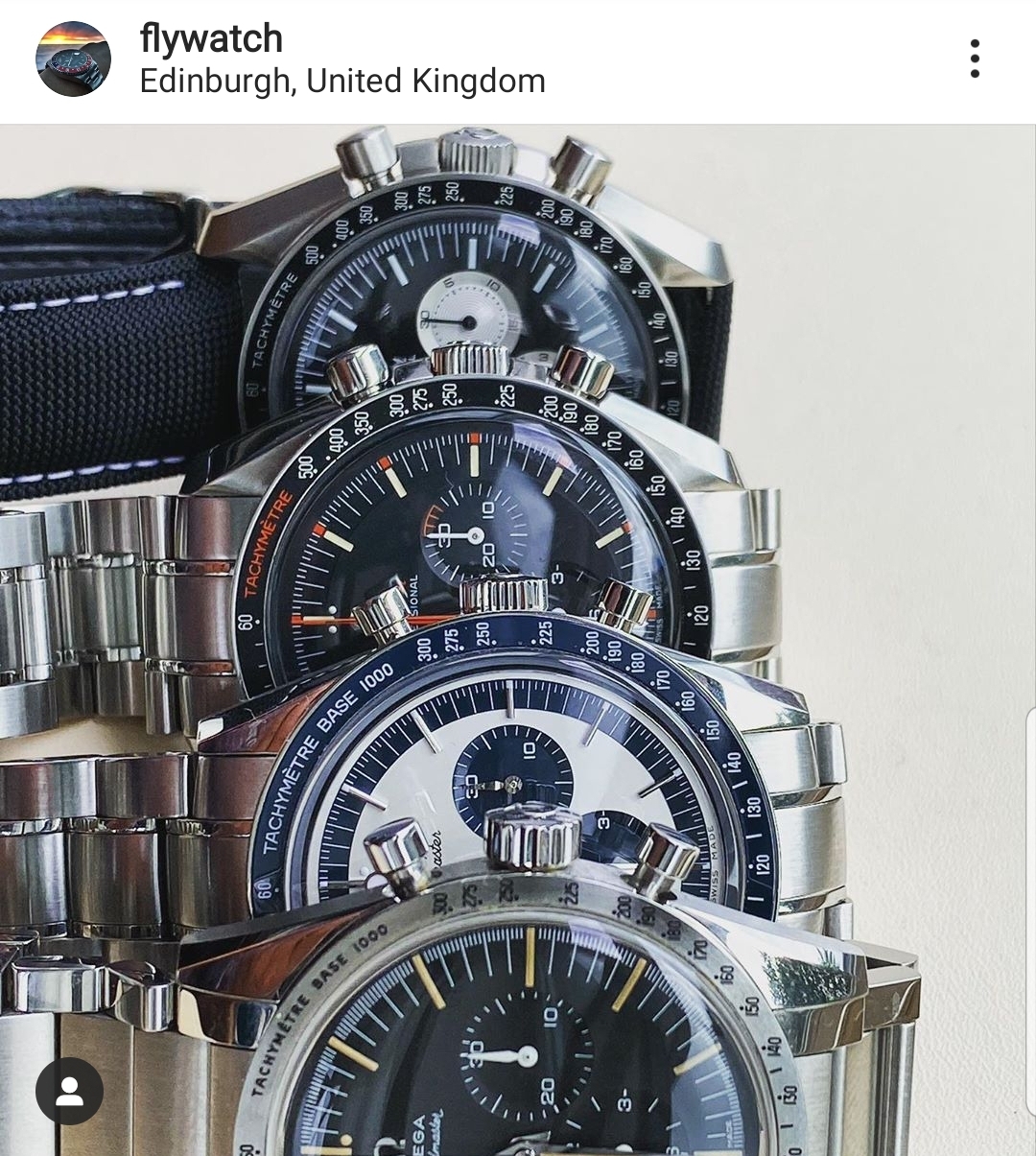 We also appreciate @flywatch for taking time out of their busy aviation style lives to post, quite literally, the most ridiculous lineup of half watch Speedmasters I think I’ve seen. All sorts of awesomeness in one picture just had to be included into our top picks for the week! Brilliant capture guys! 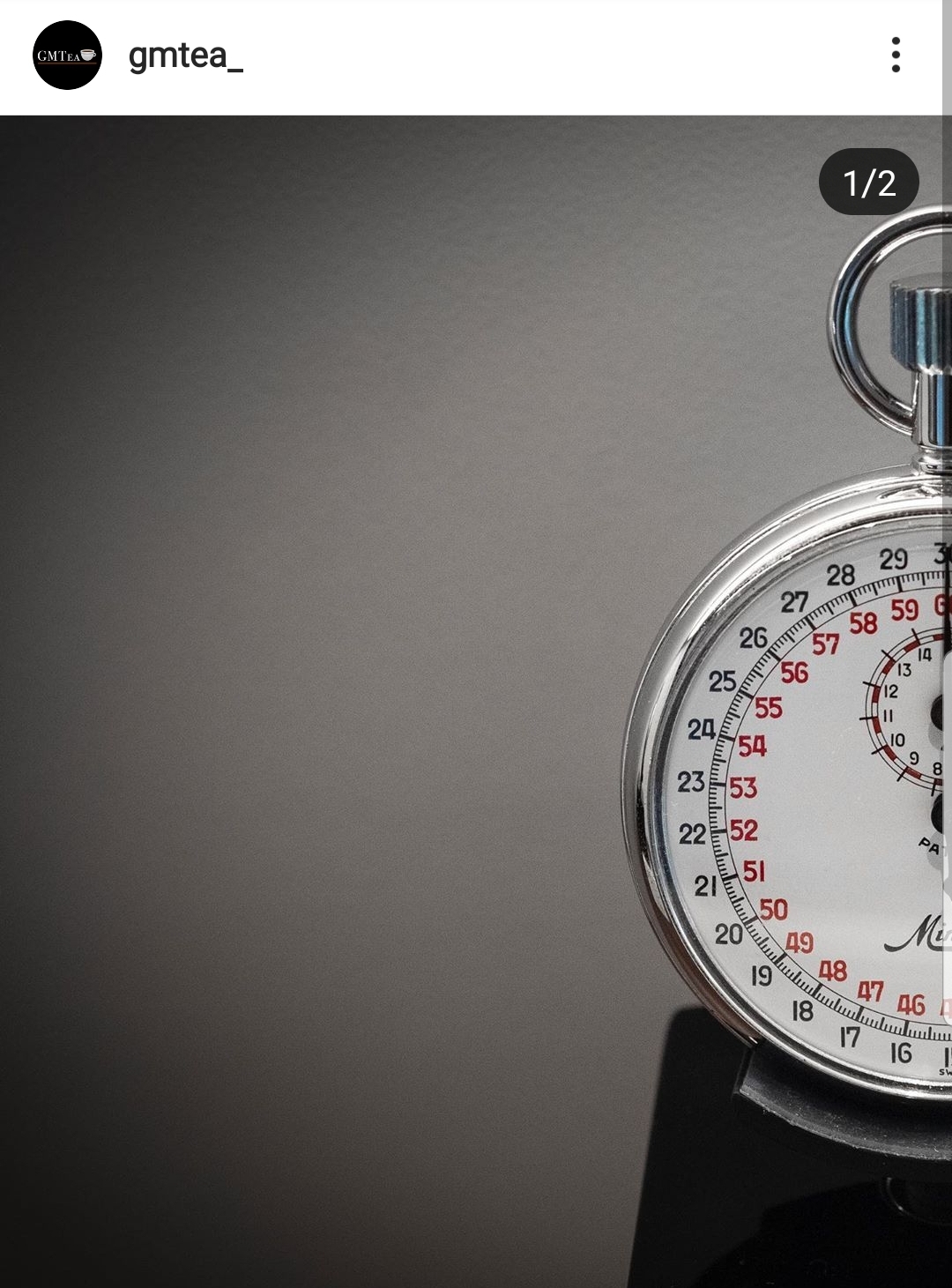 Now here at #halfwatchtuesday, we’ve missed @gmtea_ (if one has read the above article, you’ll know why). So, upon viewing his submission of, quite frankly, one of the most gorgeous pocket watches that I’ve seen we jumped for joy! Stunning shot buddy and welcome back. 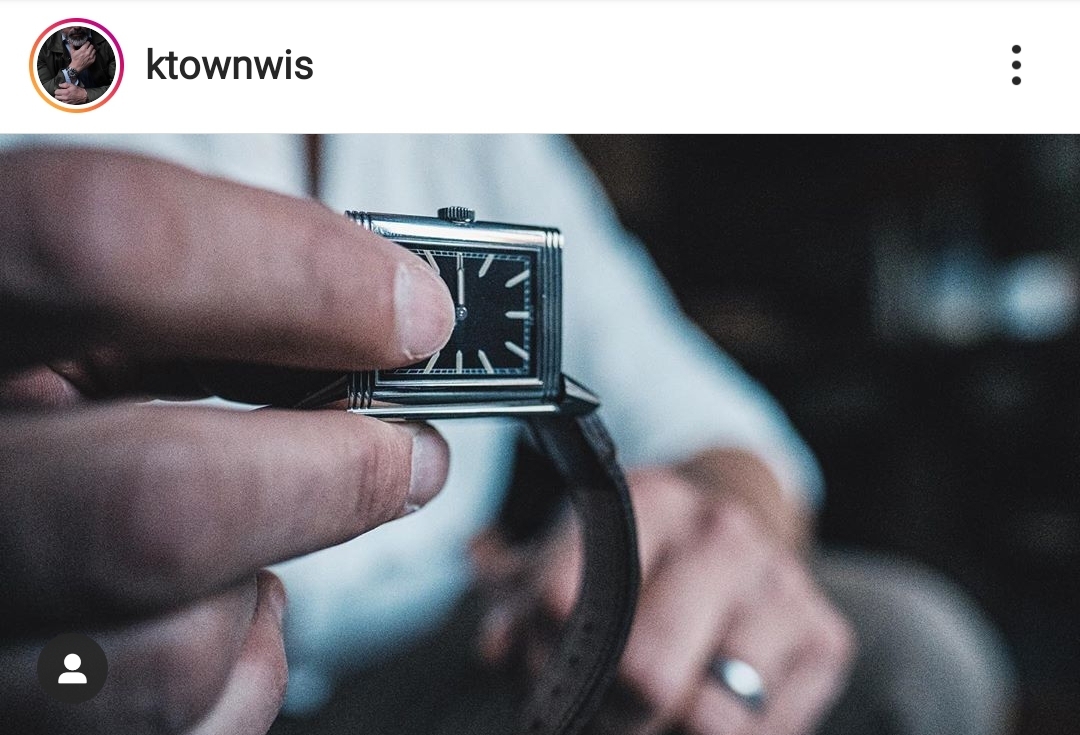 @ktownwis then brings the heat with an utterly phenomenal shot of his Reverso. The depth perception, the lighting, especially the orientation of the watch just scream originality. Really amazing capture buddy! 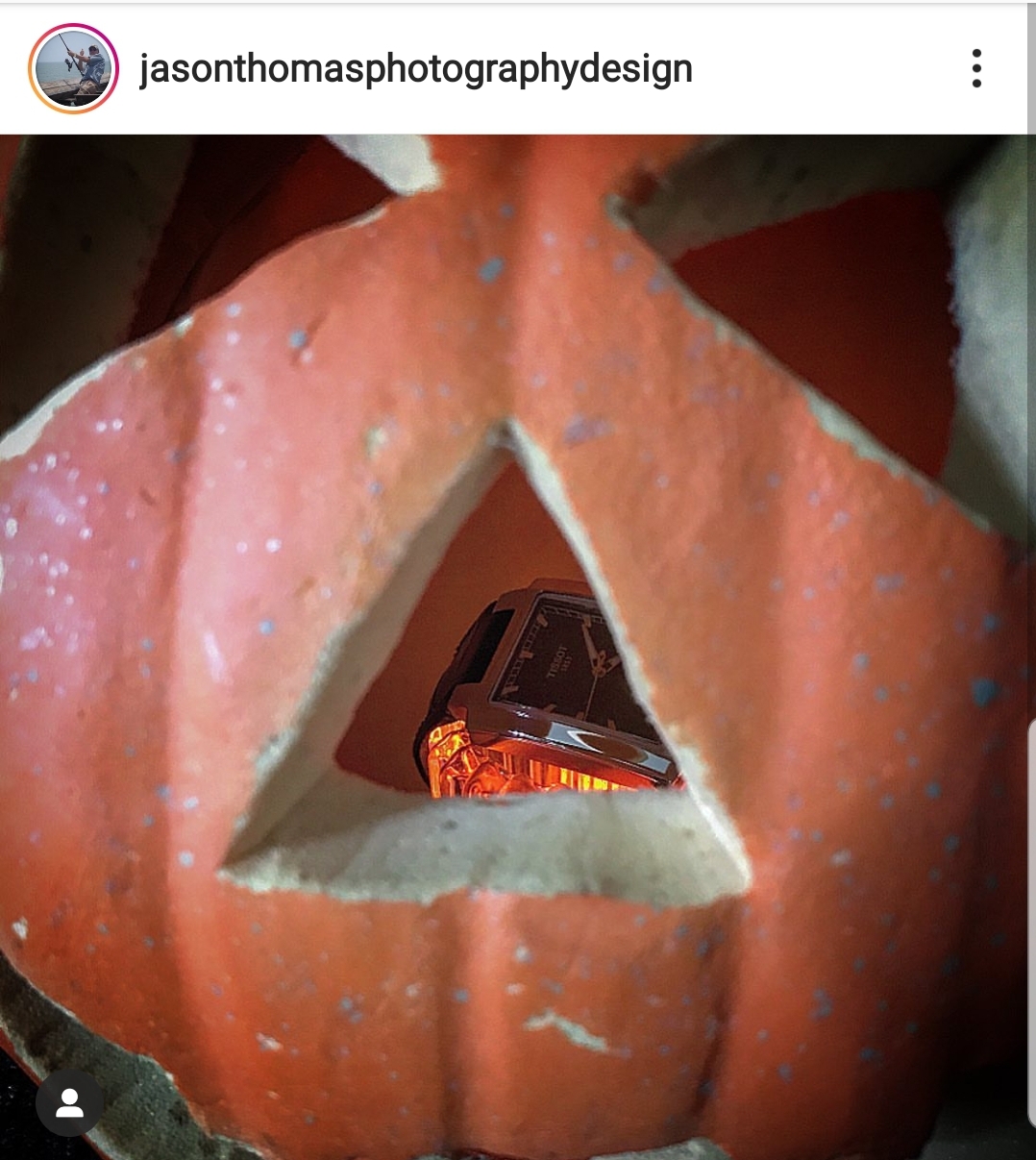 I, for one, love hiding watches within props for a #halfwatchtuesday submission. So upon seeing @jasonthomasphotographydesign and his viewing of his Tissot through a cut out window within a pumpkin speaks to me on so many levels.  Love the creativity here buddy and I hope that pumpkin will be reused for any Halloween festivities! 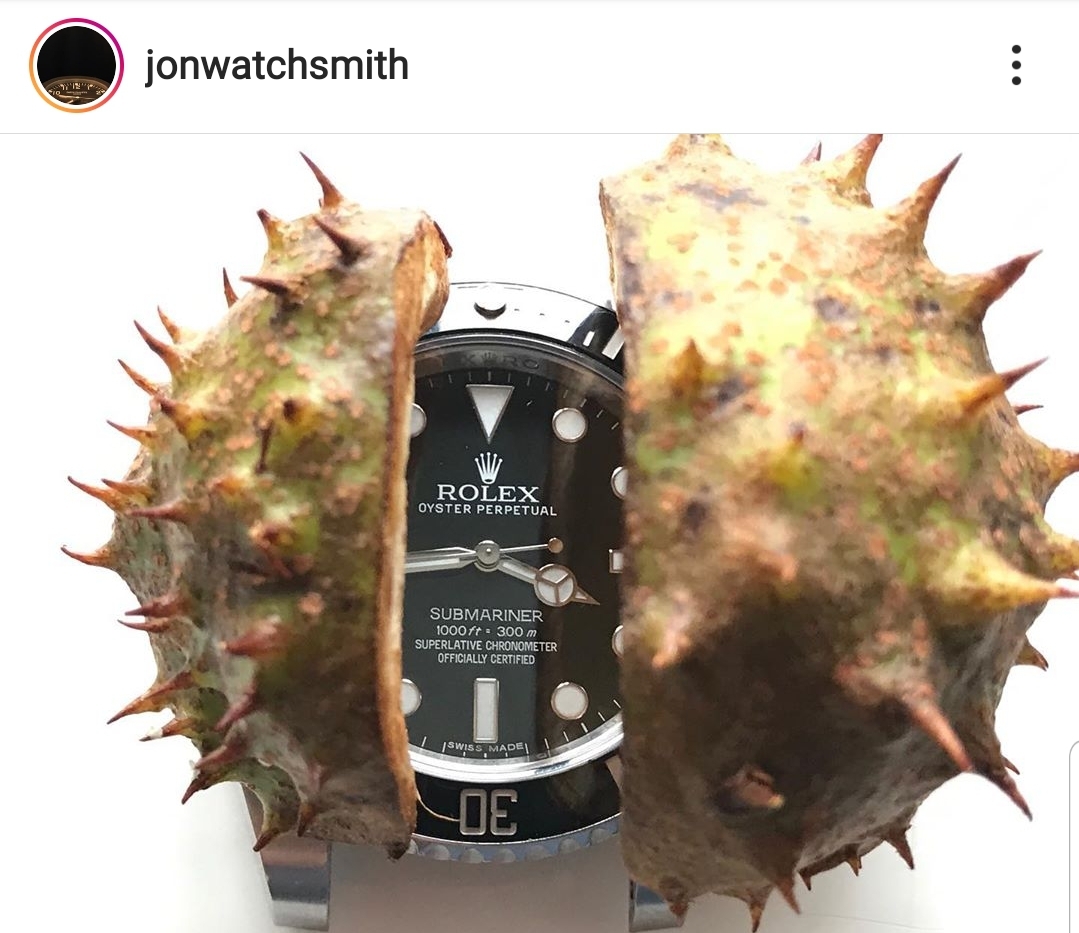 Following on with a the hiding of watches within props comes @jonwatchsmith delicately placing his Submariner within the husk of every Scottish child’s dream, a conker. Now, obviously the conker doesn’t have quite the hardness and staying power of its distant cousin from Down Under, the honkeynut, but that’s a argument for another time. Really sweet shot Jon, the contrast of the husk really makes it stand out, love it! 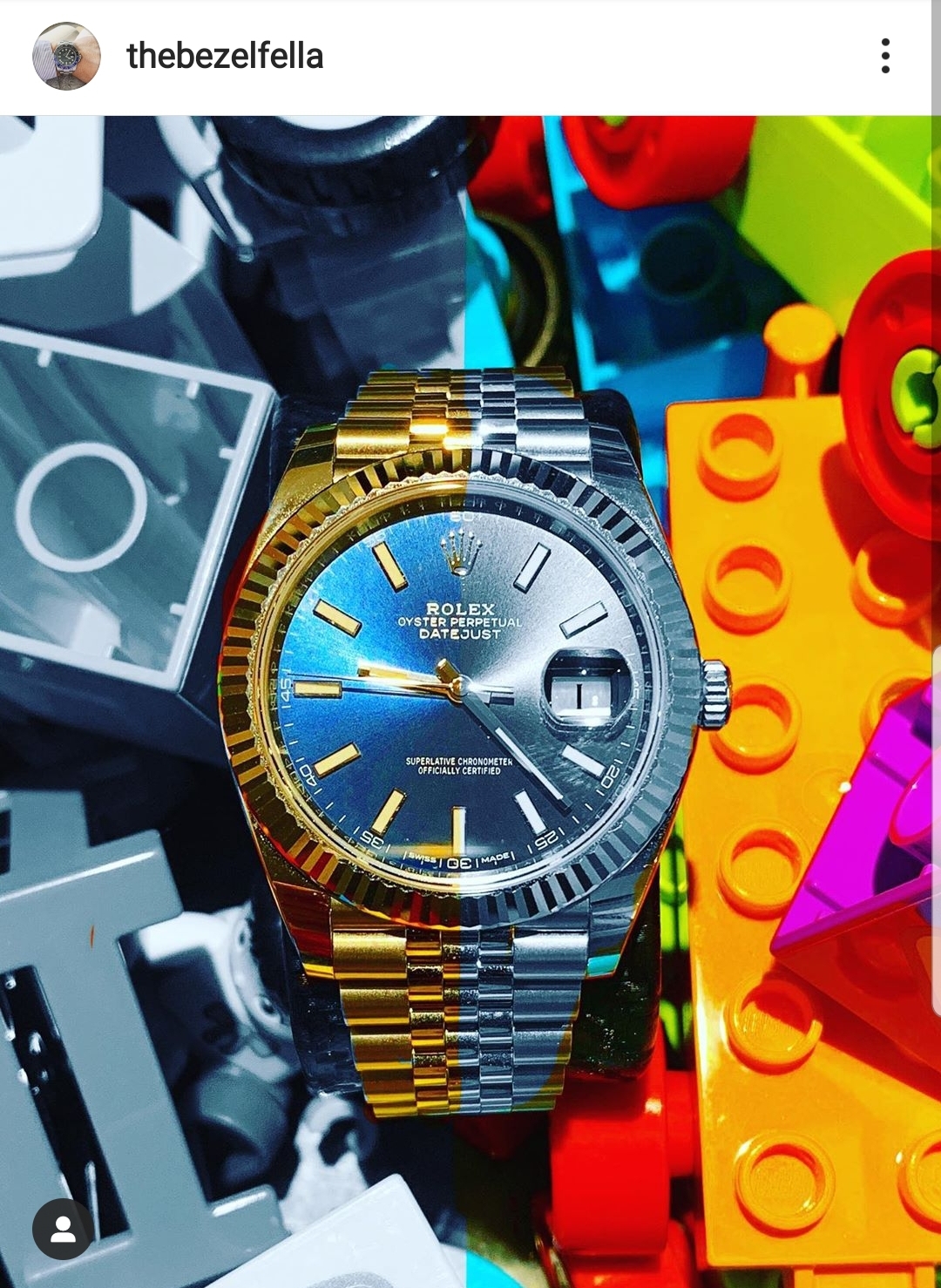 Obviously this Lego vs. Lego’s idea is still fresh in the mind of some of our followers and @thebezelfella upholds that to his full advantage with a gorgeous Datejust shot with all sorts of opposite contrast and colour effects going on. Very imaginatively done chief! 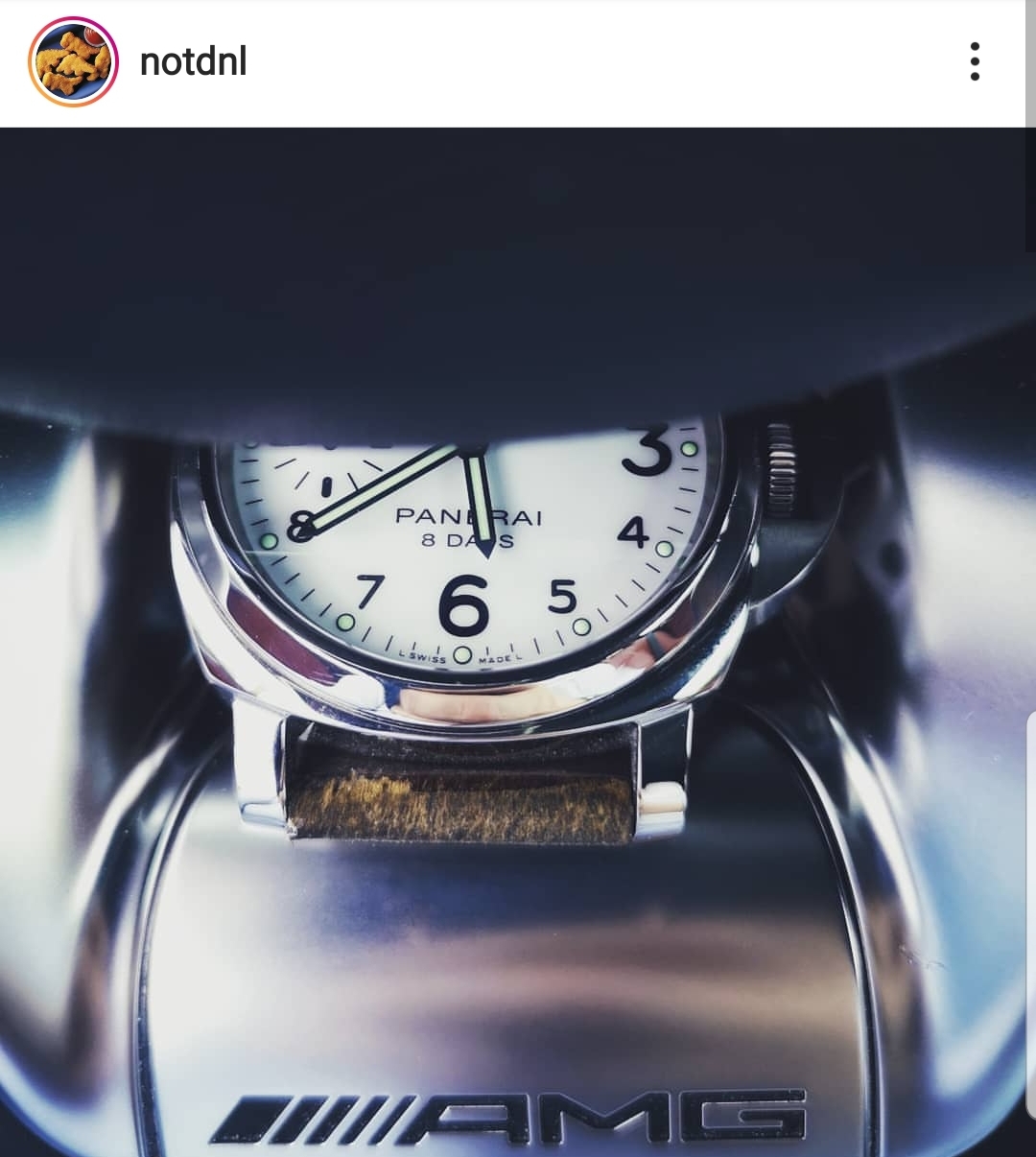 A couple of shoutouts right at the end to finish things off nicely.

First off to @verumwatches, a American microbrand soon to hit a kickstarter launch with their first model, the Mile Zero. Looks pretty sweet on paper, 40mm case, 20mm lug, 300m resistance, helium escape valve, looks to be a couple of both dial and strap options. Definitely worth a look for the future and we here at #halfwatchtuesday wish you every success for your upcoming campaign. 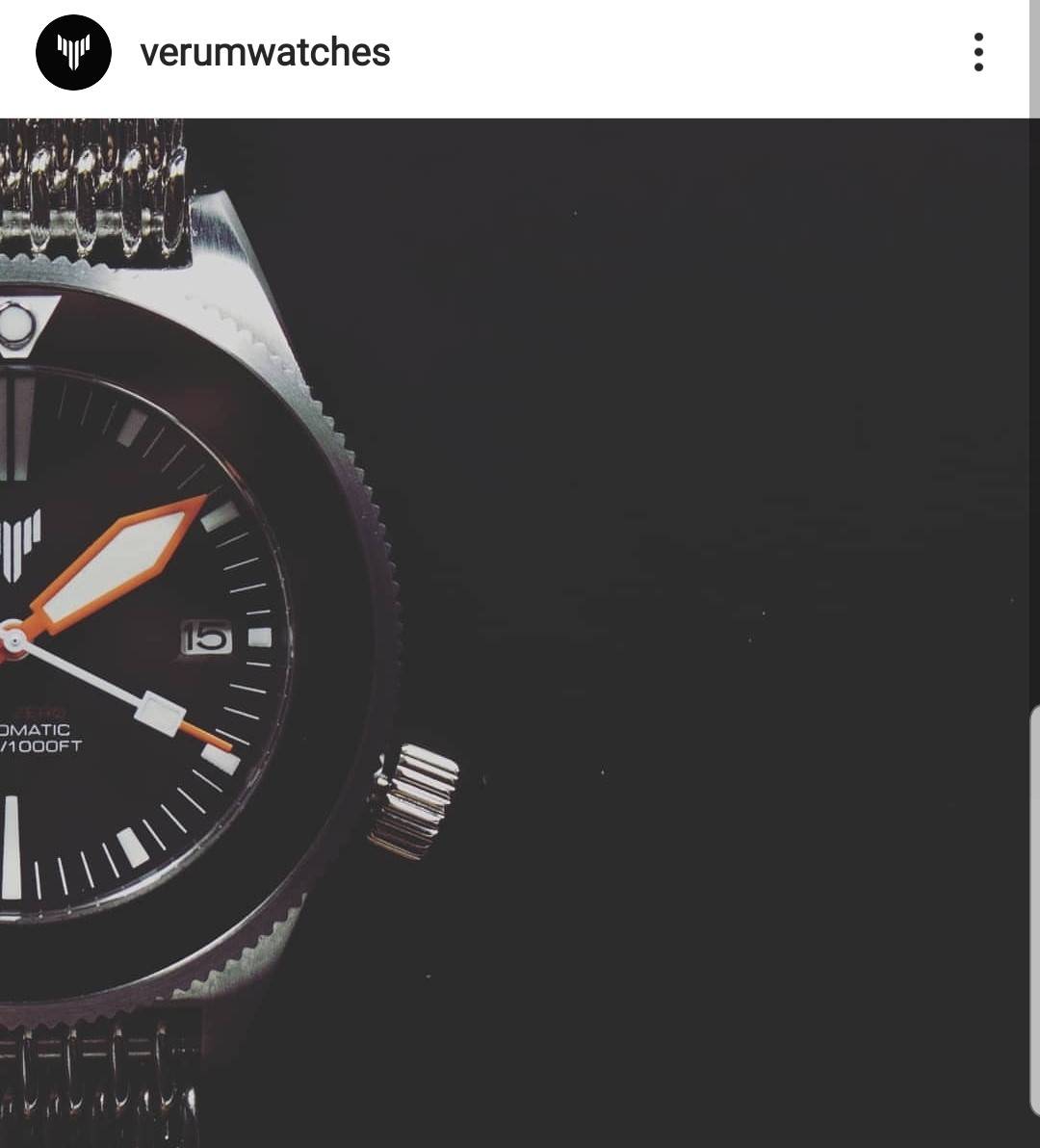 Finally to @centricinstruments who, to my knowledge has one of the few solar quartz microbrand watches out there in the watch universe (I’m waiting on @aggressivetiminghabits proving me wrong here). Looks like it has a very military style appeal to it, particularly the Mark II. They’ve a couple of pre-order options available to ship in the coming months, the Pilot Chronograph with the Ivory dial is definately a looker, would certainly think about checking them out. 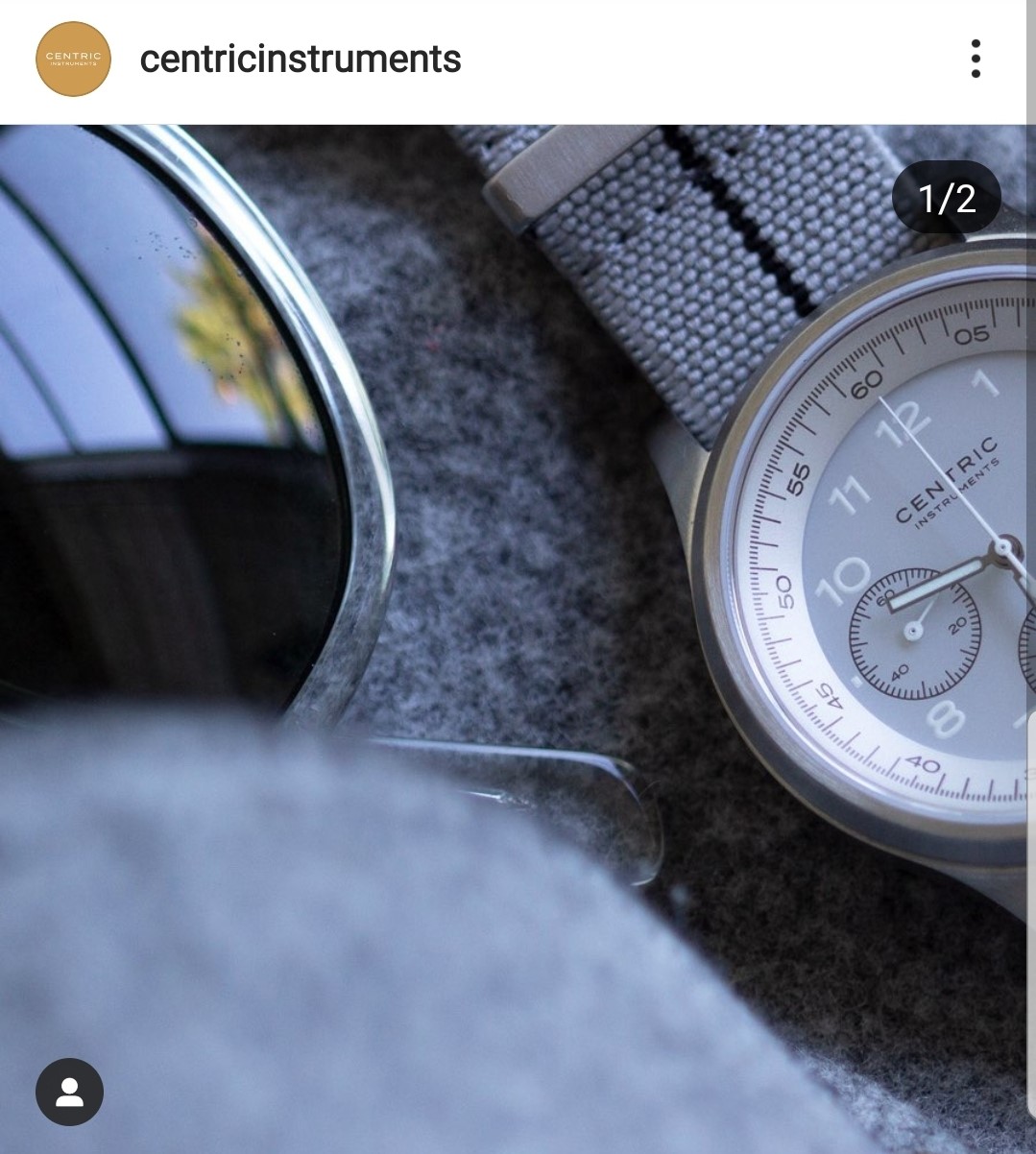 Well, that comes to the end of our journey for another week. Thanks again to everyone who submitted this week and for all of you who continue to support us. We are very much looking forward to seeing what you guys hold in store for us next week!

Until then, yours in horology