Only recently the watch community was given a very loud wakeup call on the matter of due diligence. In case you’ve been sleeping under a rock I’m referring to the “Horology House fake Daytona, my parent’s house is on fire Ponzi scheme” scandal. I won’t go into any detail as there is both an article and a podcast episode on this website that explain the matter eloquently, fairly and with no undue drama. Please catch them both: they represent top class watch journalism. My opinion in a nutshell is: even if there are a few rotten apples in the basket that doesn’t mean the whole lot has to be chucked away. Please allow me to share a story with a happy ending: a tale of friendship, trust and of course, watches! 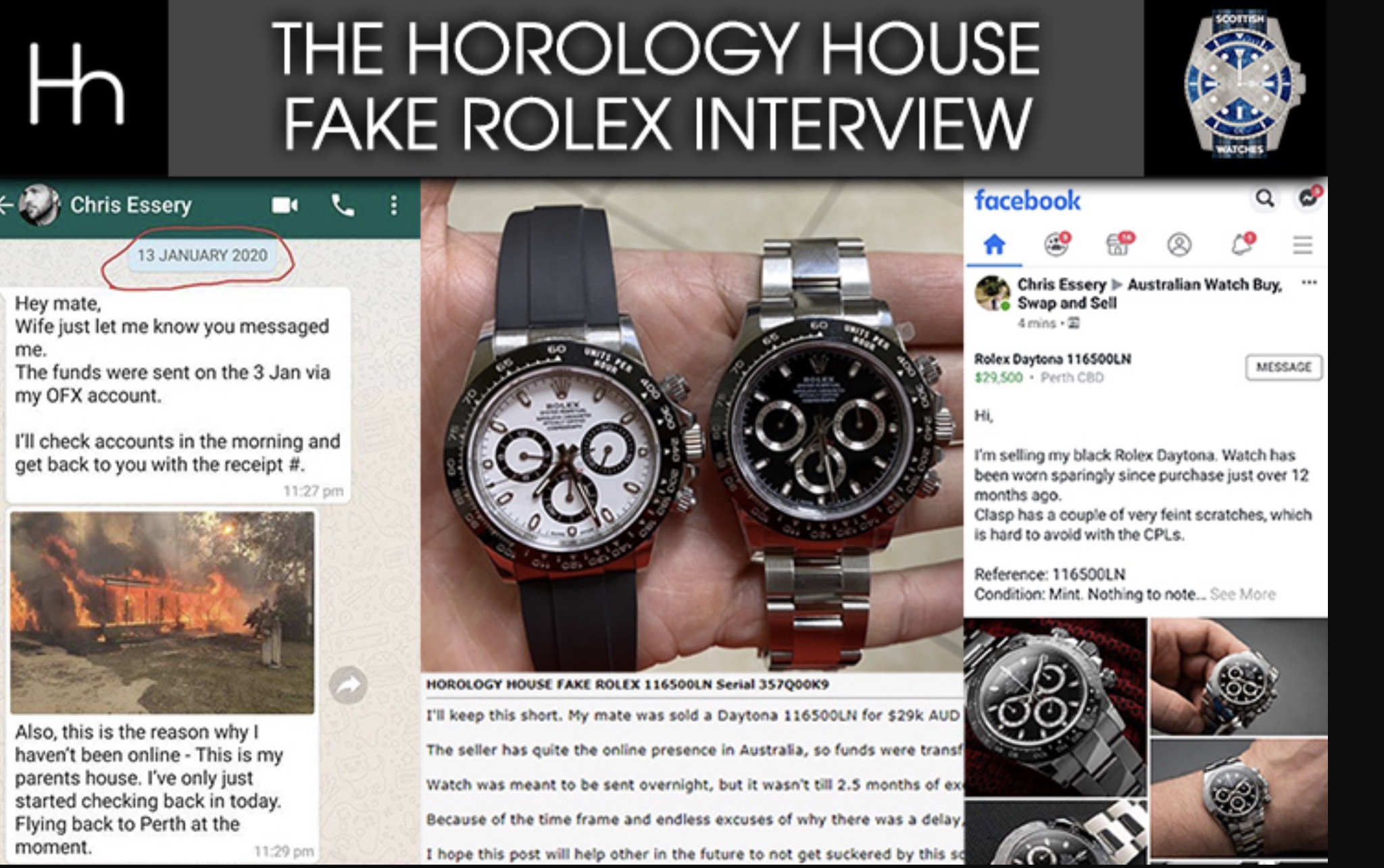 As I’ve often said, despite being a lifelong watch enthusiast, I’ve only been actively pursuing my watch hobby since last summer. What started off as a fling has grown into a passion that takes up a sizable part of my free time.

Initially, I was inspired by the usual suspects: the many YouTube watch channels. I started off like most peeps with TGV, but I slowly began broadening my horizons with Teddy B., Federico, Armand, Long Island Watch, Just One More Watch and Bark & Jack to name but a few. My initial thought was: “Great stuff! I can do that!”; and hence I began my quest to become a relevant voice in the social network of watch enthusiasts. 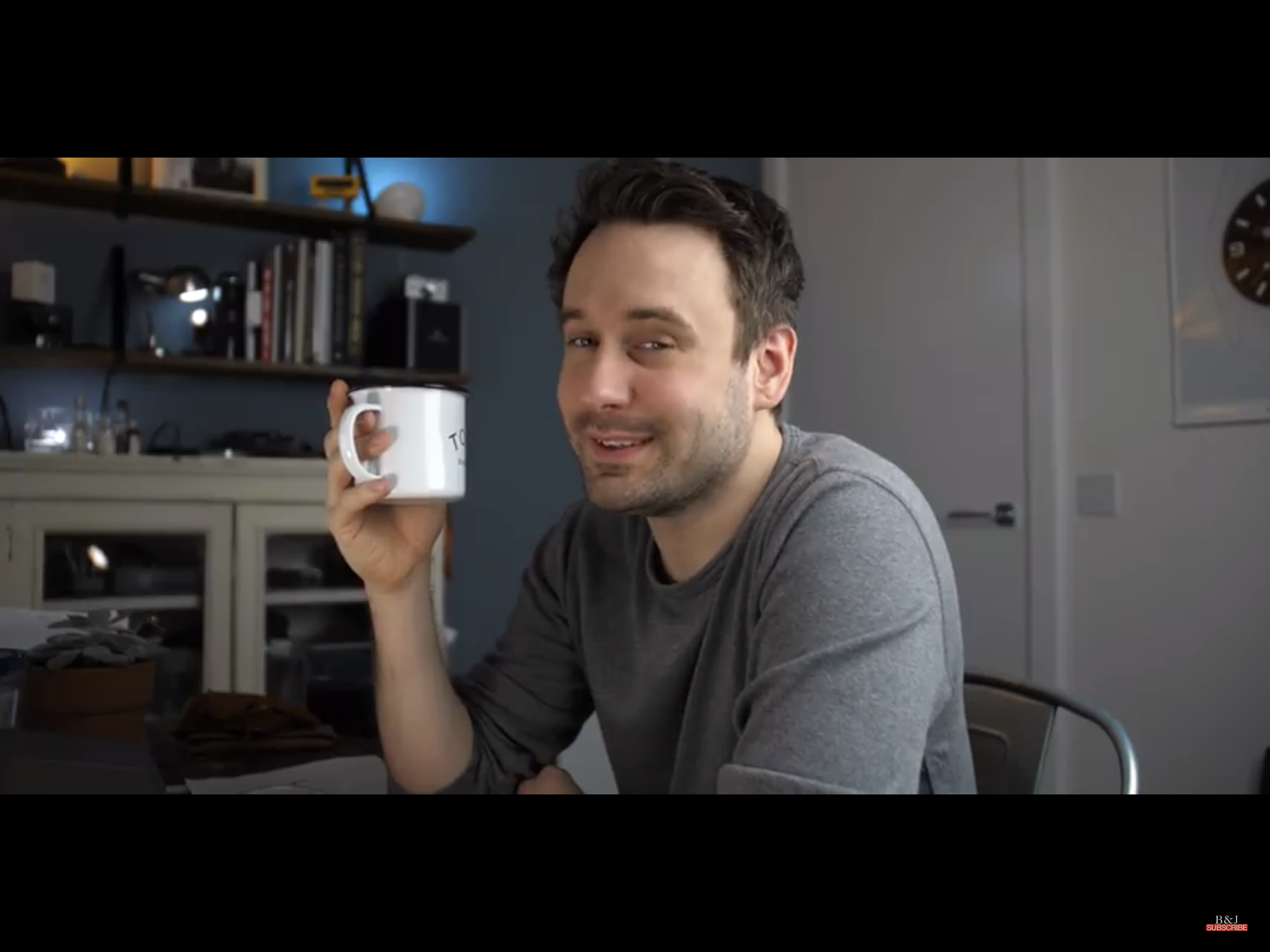 What I needed now was a starter piece, an interesting watch that would attract some attention without breaking the bank: the Unimatic U1-SP was the choice. I had never heard of the Unimatic micro-brand before. I casually came across their lineup during a visit to my favourite watch dealer in Milan, Grimoldi, right next to the Duomo cathedral. While I was impressed by the fresh minimalist design and top-notch build quality, I didn’t pull the trigger at the time.

Jump ahead a few weeks and during my daily watch blog scanning routine I came across a news article on ABTW announcing that Unimatic was about to release a 50-piece, limited edition, NASA inspired version of their U1 model to be launched day and time of the 50th anniversary of the Apollo 11 moon landing. Being an incurable aerospace nerd I made it my mission to become one of the 50 future owners of this moon junkie piece of horology. Or, more precisely, I couldn’t make heads or tails of the Omega Speedmaster lineup at the time! The Unimatic was a much simpler, much cheaper choice. 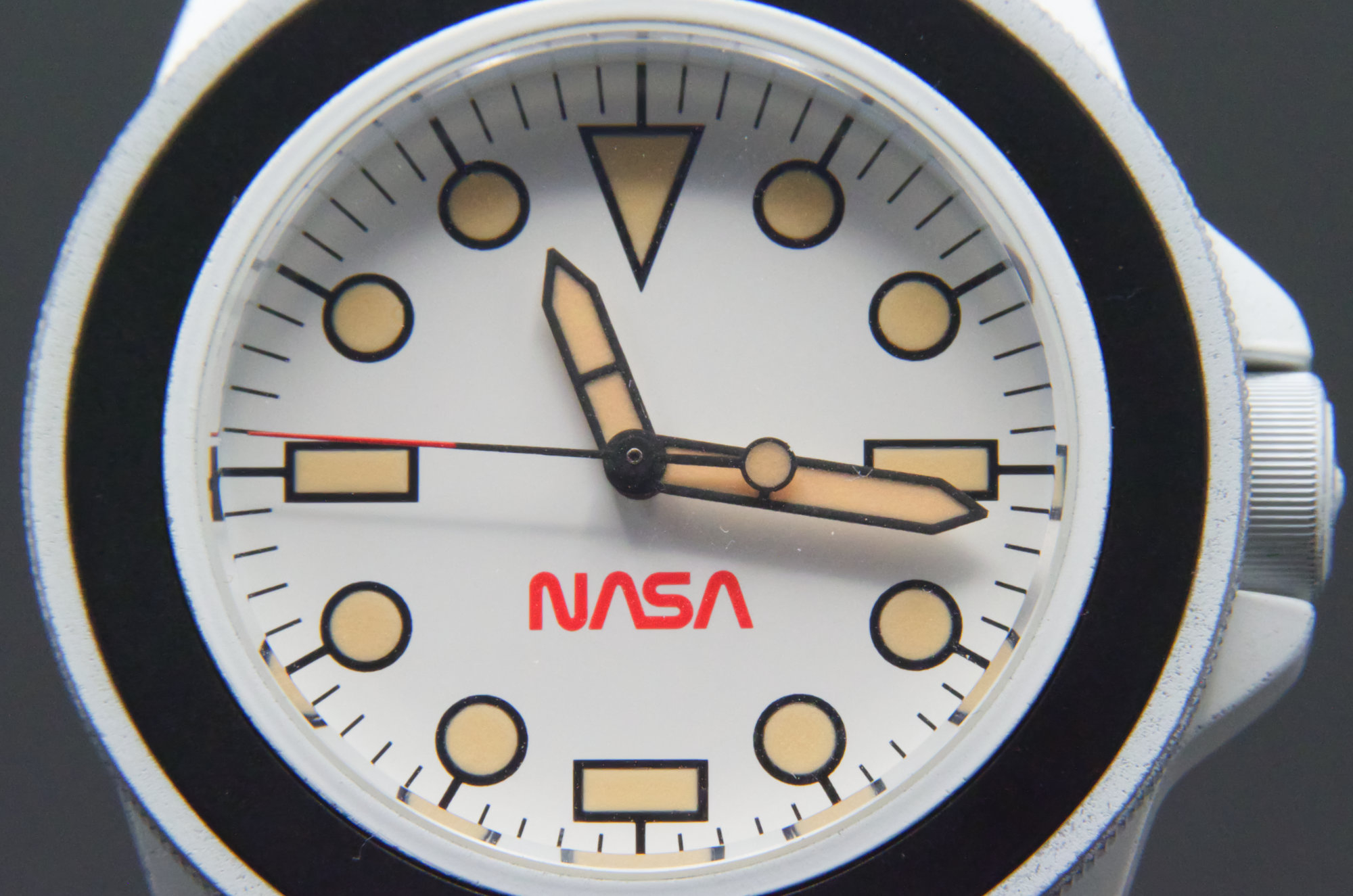 When the launch day arrived  I wore out the refresh key on my keyboard waiting for sales to begin on the Unimatic store page. In the end, I managed to check out and buy one. By the time I had received my confirmation e-mail less than a minute later, the watch had already sold out. That’s faster than a Hodinkee limited edition or the Timex-Q! I was ecstatic.

My first impulse was to go public with my newly acquired treasure, so I posted a shot on my recently created Instagram watch account. I only had a handful of followers (about 200) at the time so I wasn’t expecting a barrage of likes and comments. Oddly enough the post began to gain a modicum of interest compared to my previous efforts. 128 likes and 9 comments! “Wow” I thought, “somebody actually gives a shit!”. 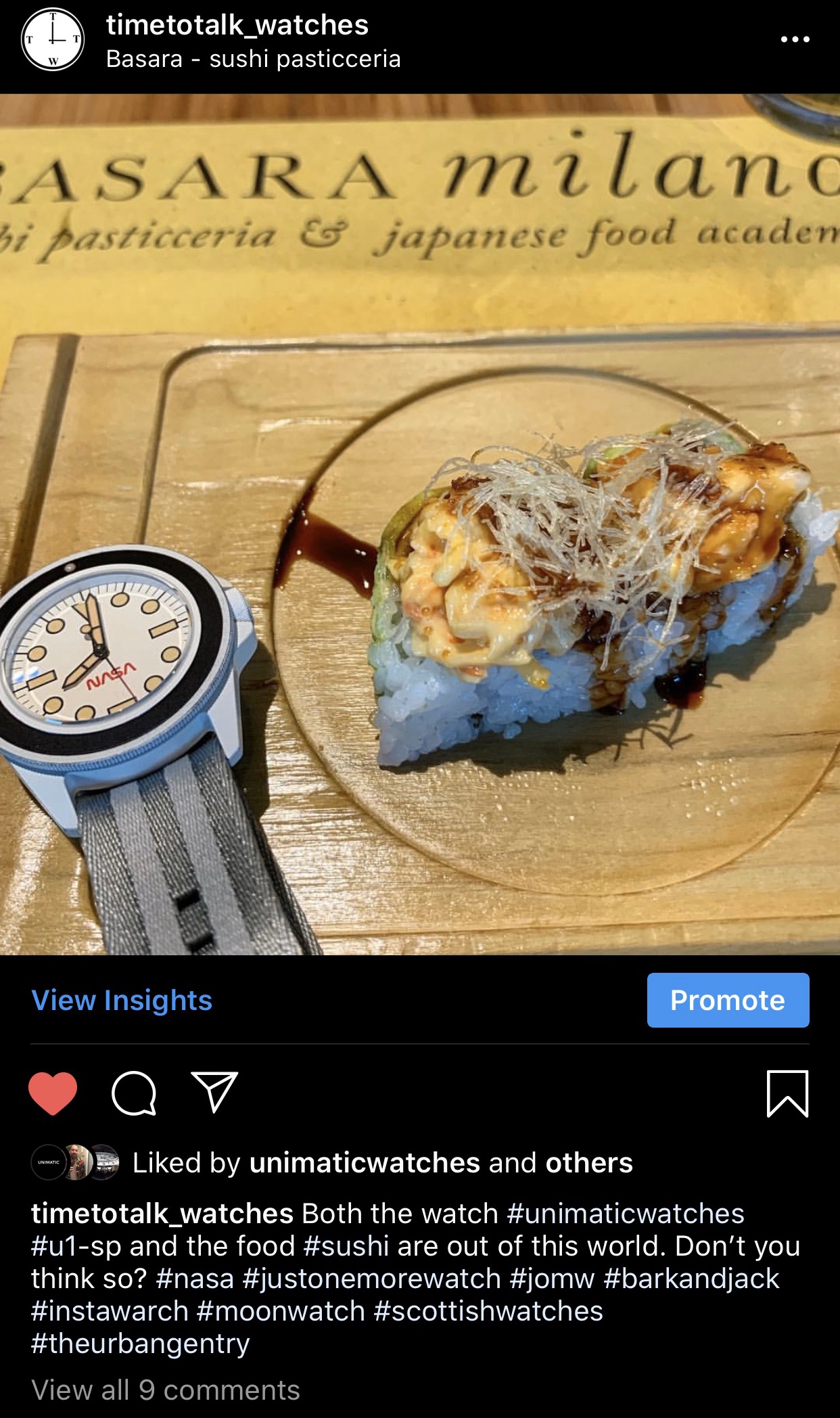 One of these comments was from a young bloke from London by the name of Faheem (@kingflum). He was trying to track down as many as possible of the 50 owners of the same watch (he has since managed to find a couple of dozen). He seemed like a nice guy so we began chatting about watches and stuff via DM: this was the spark that would eventually lead me to become acquainted with Dave Sharp (@floatlite), join RedBar London and come to know of the existence of the Scottish Watches podcast.

As luck would have it I would be spending my summer holidays in London. During my stay in the city there was a scheduled RedBar meeting which I had the pleasure of attending. Faheem and I met there for the first time, both of us sporting our “cheapish and rare moon watch”. Dave turned up a little later but had forgotten to bring his piece (he is also one of “the 50”). It was sad because we had planned to take the wristshot of the year: three U1-SP’s in the same picture.  In the end we had to make do with this post. 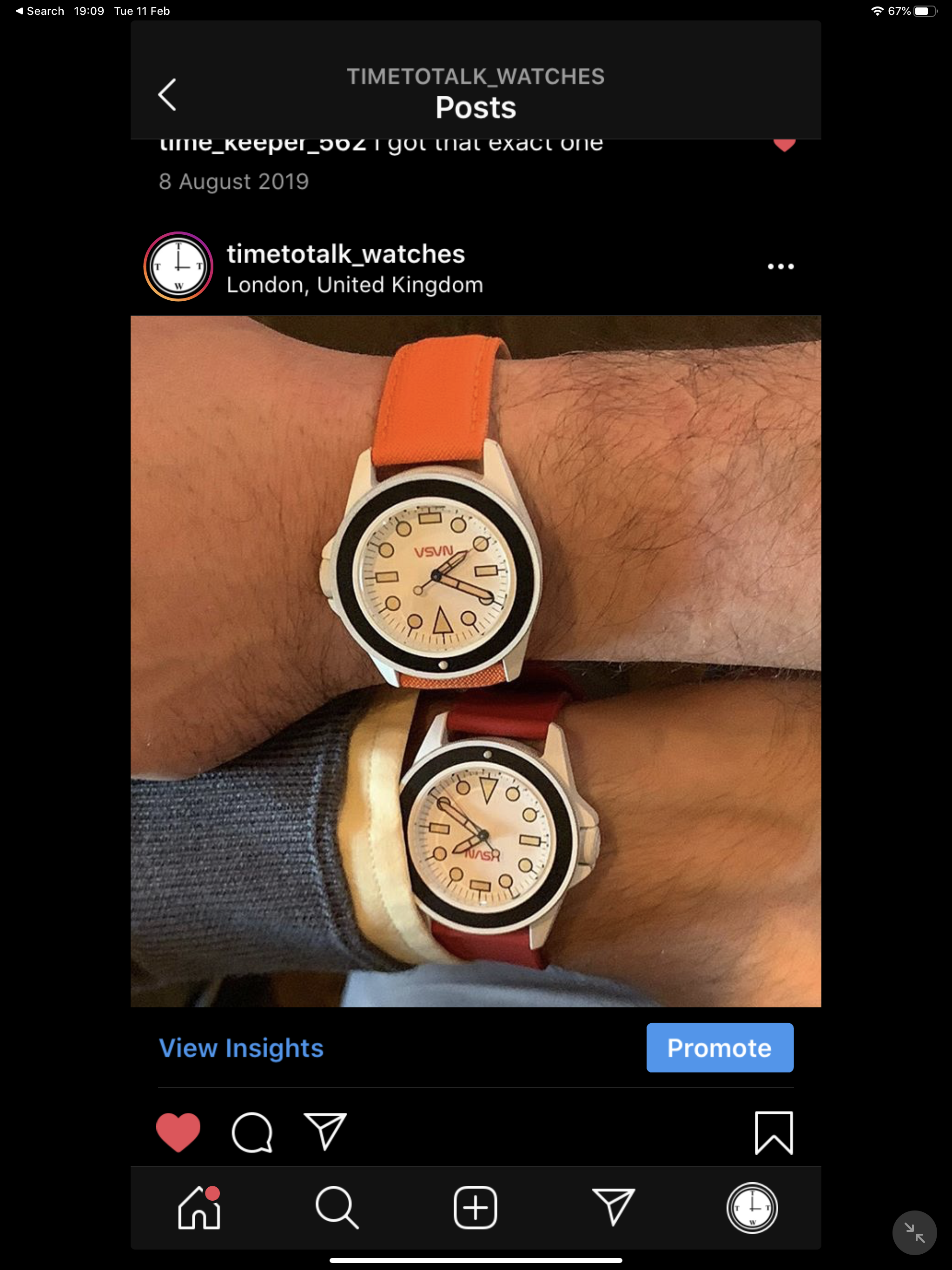 The meet went along smoothly and was great fun. I had never been to an event like that, no snobbery, no elitism, just a bunch of watch nerds exchanging ideas and trying on each other’s timepiece. We got a lot of questions on our Unimatics and happy to let anyone who asked try it on. Never was there a moment where I feared someone would run away with “my precioussssss”.  Mainly because there were watches present at the meet worth 20 times the price of the humble Unimatic.

And so it began: Faheem told me that the guys at Scottish Watches were always on the lookout for good articles. I had never heard one of their podcasts (or any podcast for that matter) and, driven by curiosity, I  gave them a listen. I have been hooked ever since. The thing I liked the most about the podcast was that Rikki and Rick never took themselves too seriously and that they routinely took the piss out of each other, and many upstanding figures of the watch community (but always with taste…sort of!). So, being the joker that I am,  I decided to take my turn in pulling their leg: I sent Rick an audio message pointing out the pronunciation of the brand name Sinn: and so the “Zinnnn” meme was born. 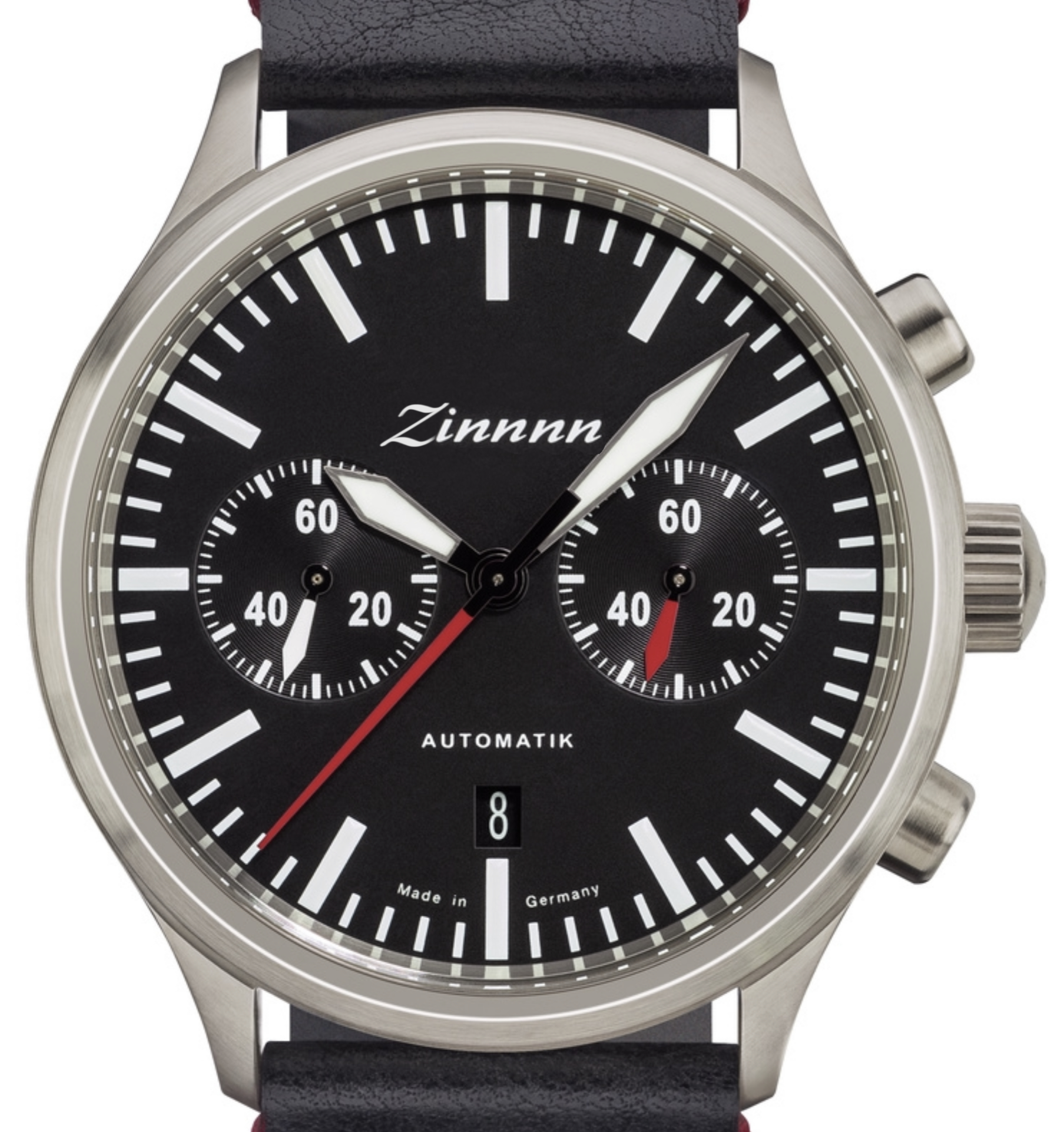 One thing led to another: Rick was kind enough to publish one of my reviews, and, before I could say “Zinnnn” again I was welcomed into the Scottish Watches fold as a regular contributor. The rest, as they say, is history! It’s great fun writing and chatting about the world of watches in the whatsapp writers group. It’s a pleasure that I look forward to every day. The last time I was in the U.K. I even made a day trip to Glasgow by train just to meet Rikki and to see Dave again. At the end of the day, I was totally knackered but it was totally worth it.

The morale of the story is, scammers aside, the watchfam is still a great community to be a part of. My voyage through this world has been an engaging mix of great people, great watches and above all sincere friendship. I often go to London and, even if time is short, I always find a moment to grab a bite to eat or have a drink together with Faheem and/or Dave.  I’ll be going back to London in two weeks’ time and I can’t wait to see my new found watch-nerd friends again, and, who knows,  maybe meet a few new ones.