One of the best things about this hobby that we all love is the people. In the short two years since I began falling down this rabbit hole of watch collecting, I have had the privilege to come to know some really amazing people.

I believe that many of you would also have had similar experiences and there is a lot of trust that is fostered in the community. Just look at the hundreds of thousands worth of watches that are brought to Red Bar events and similar get-togethers around the world. 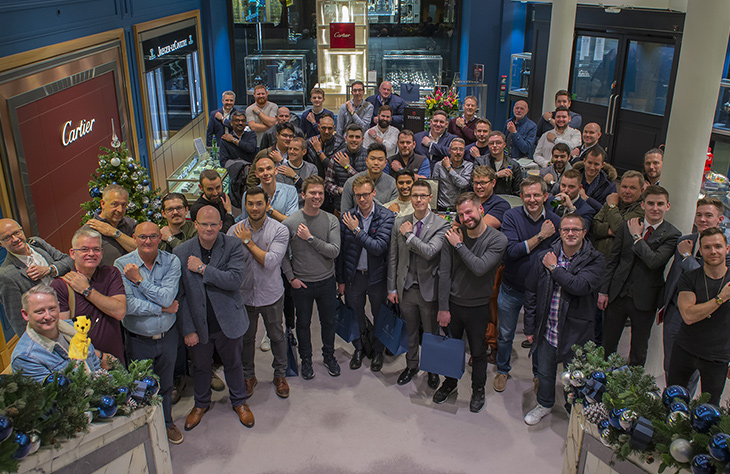 It is therefore gravely disappointing to hear of instances where this trust is broken. One such case came to light at the start of the month, involving Chris from Horology House.

For those who are not aware, Chris Essery sold a Daytona to a buyer that turned out to be a fake after initially giving him a run around for a month on the shipping of the watch. According to the WhatsApp thread that the buyer posted on The Rolex Forum, Chris appears to have lied on multiple occasions about even shipping the watch, used the tragic bushfires in Australia as an excuse for delays and after being questioned on the authenticity of the watch, was not upfront in his processing of a refund.

Since that post was made, there have also been claims by other former customers that they were similarly given the run around in their watch purchases, and in one instance, had to wait 6 months for a refund. A picture that Chris sent as part of his claim that his parents’ house had burned down also turned out to be merely a screengrab from a news article online. 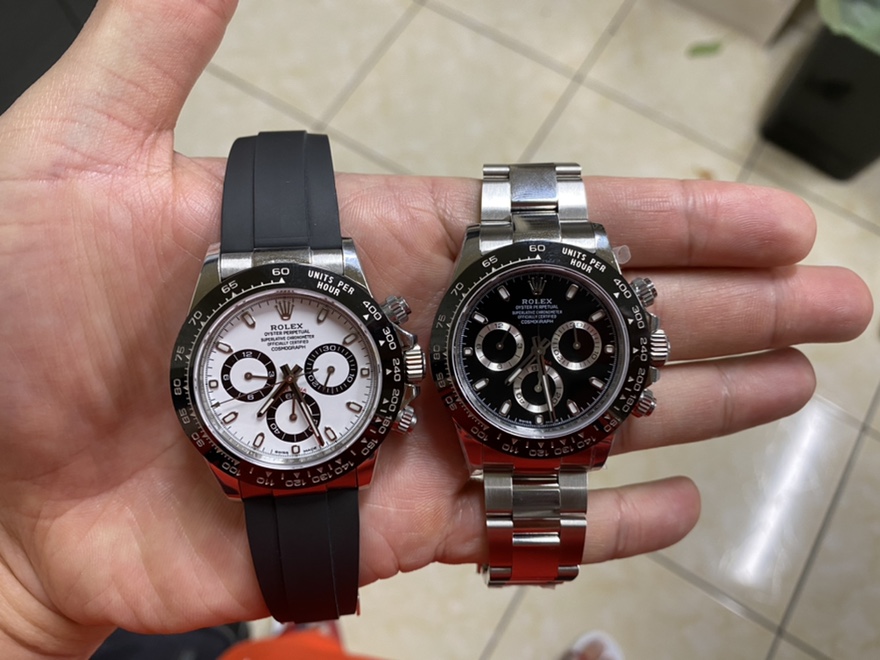 What was more concerning was the fact that the buyer was sent a fake Rolex Daytona after wiring AUD 29,000 to Chris. Based on the comparison pictures that the buyer posted, the fake seems to be extremely close and the differences noticeable only if you were looking for them. I surmise that had he not been already sceptical because of the delays and excuses he had been given, he might never have bothered verifying the authenticity.

After all, this was Chris from Horology House who made his name on YouTube by having extremely high-quality macro shots and even once posted a real versus fake Submariner comparison video (his channel has since been taken down). Surely, he could be trusted to know if he was dealing with a fake Rolex and would not pass that on to a buyer? 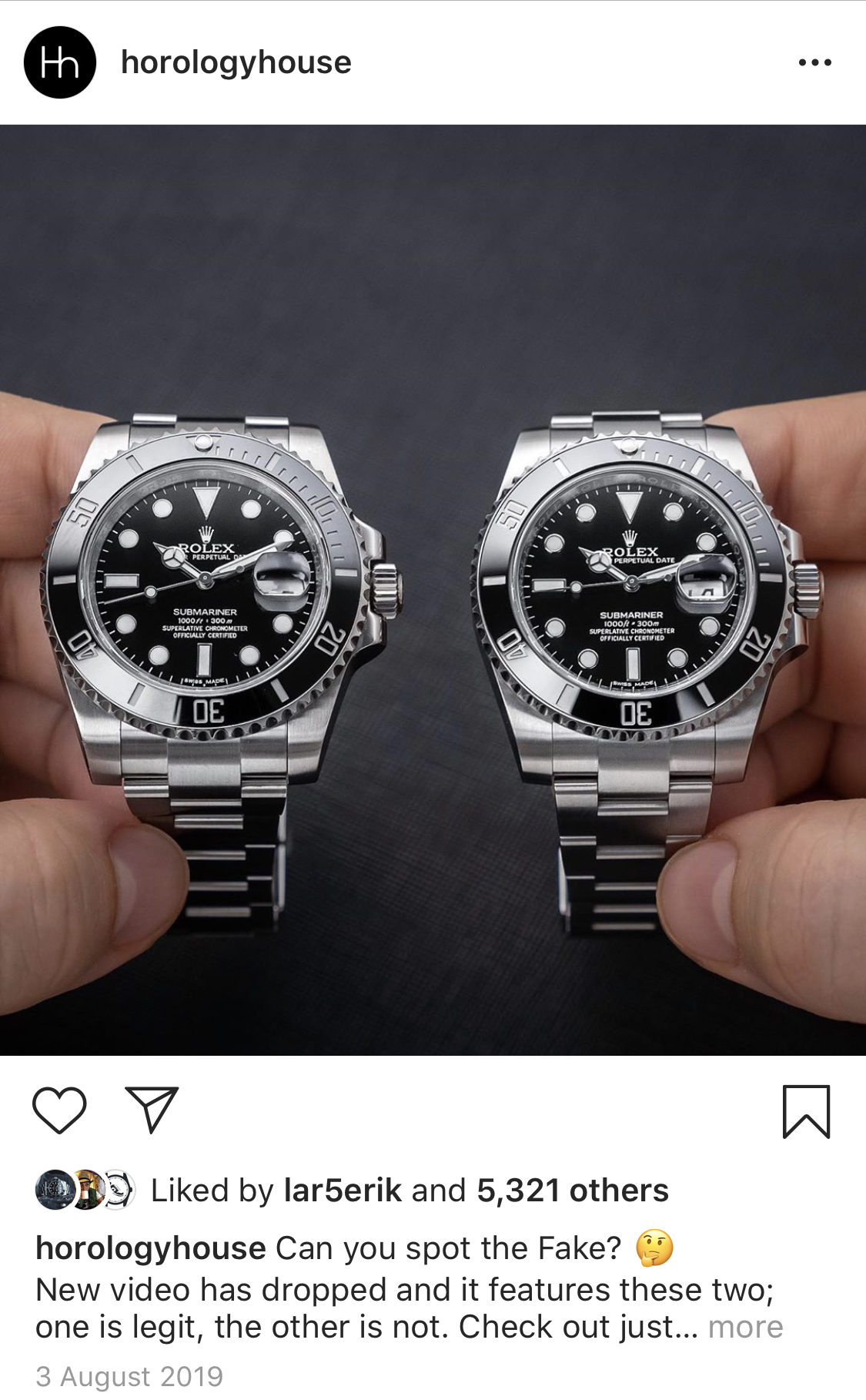 Chris has since responded on Instagram (now made private), claiming that he had been unaware of the fact that the watch had been a fake among other things. As with everything, there are two sides to a story, though Chris has not really given much of his side besides his brief apology on Instagram. It is unclear at this stage if he ever will, but in the coming days, and weeks, it is likely that we will all find out how deep this goes. 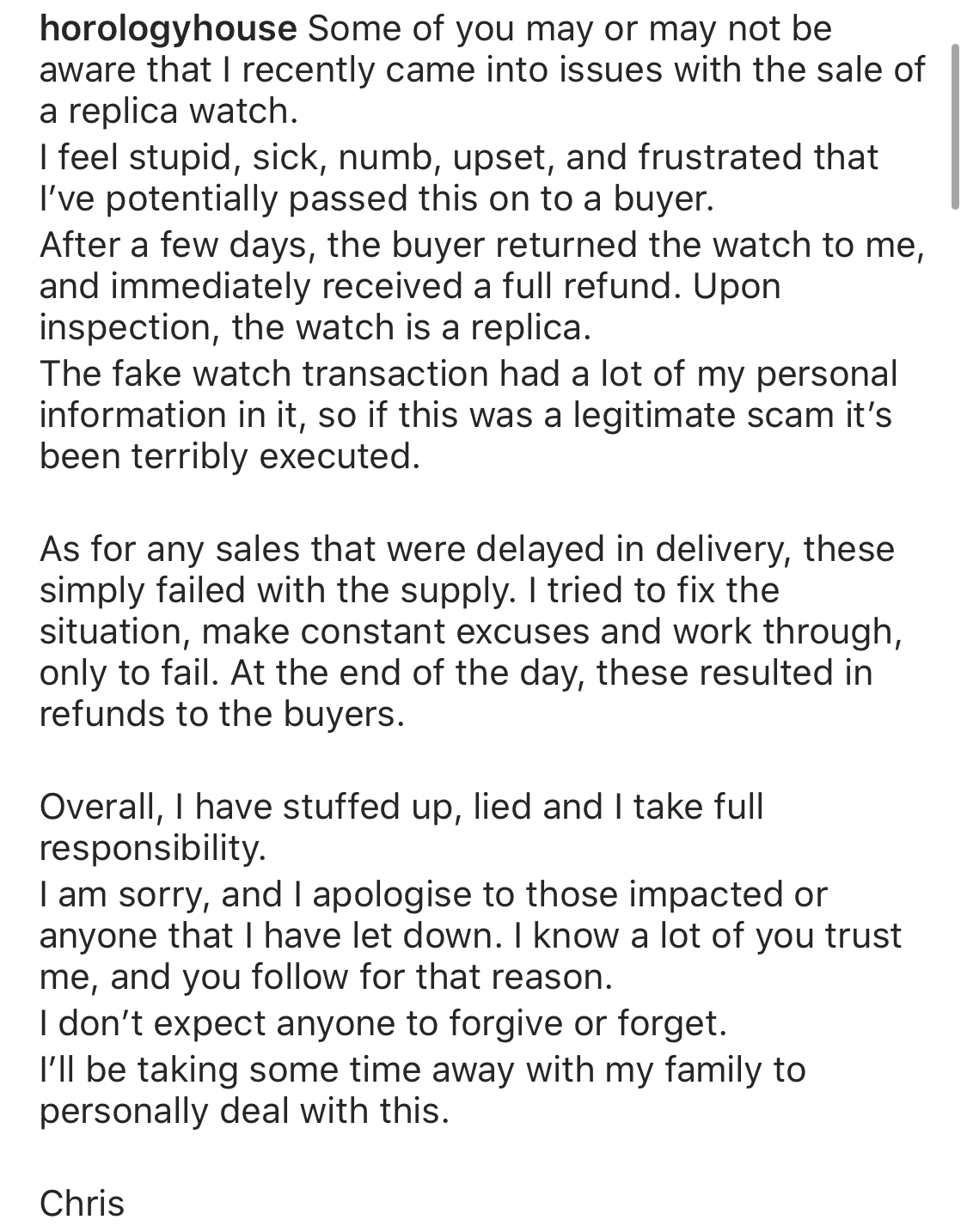 One thing is clear though, there is a dark side to the watch industry the involves fake watches, and the unscrupulous people selling them. The Federation of the Swiss Watch Industry (“FH”) estimates that the annual volume of counterfeit watch sales are double that of genuine watch sales at 40 million to 23 million.

More critically, the quality of fakes was exponentially increasing. As recently as 2013, Ariel Adams (from aBlogtoWatch) stated in an article for Forbes that “merely looking at the movement inside of it (the watch) would inform me in an instant that it was a fake”. That may no longer be the case especially if you are not as experienced as Ariel Adams is. Fake watches are no longer the poor quality watches that we presume them to be.

Joe Thompson (from Hodinkee) reported in an article for Watchtime magazine of a fake Hublot Big Bang that comprised of high precision tourbillon movement replicas. Watchfinder posted a thorough comparison video between a real and fake Daytona and the closeness is outstanding. It is something that one who is not highly experienced would likely be able to differentiate especially when handling it in isolation of the real deal. It is scary to think of how many watch buyers new to the hobby could fall for if they are not careful. 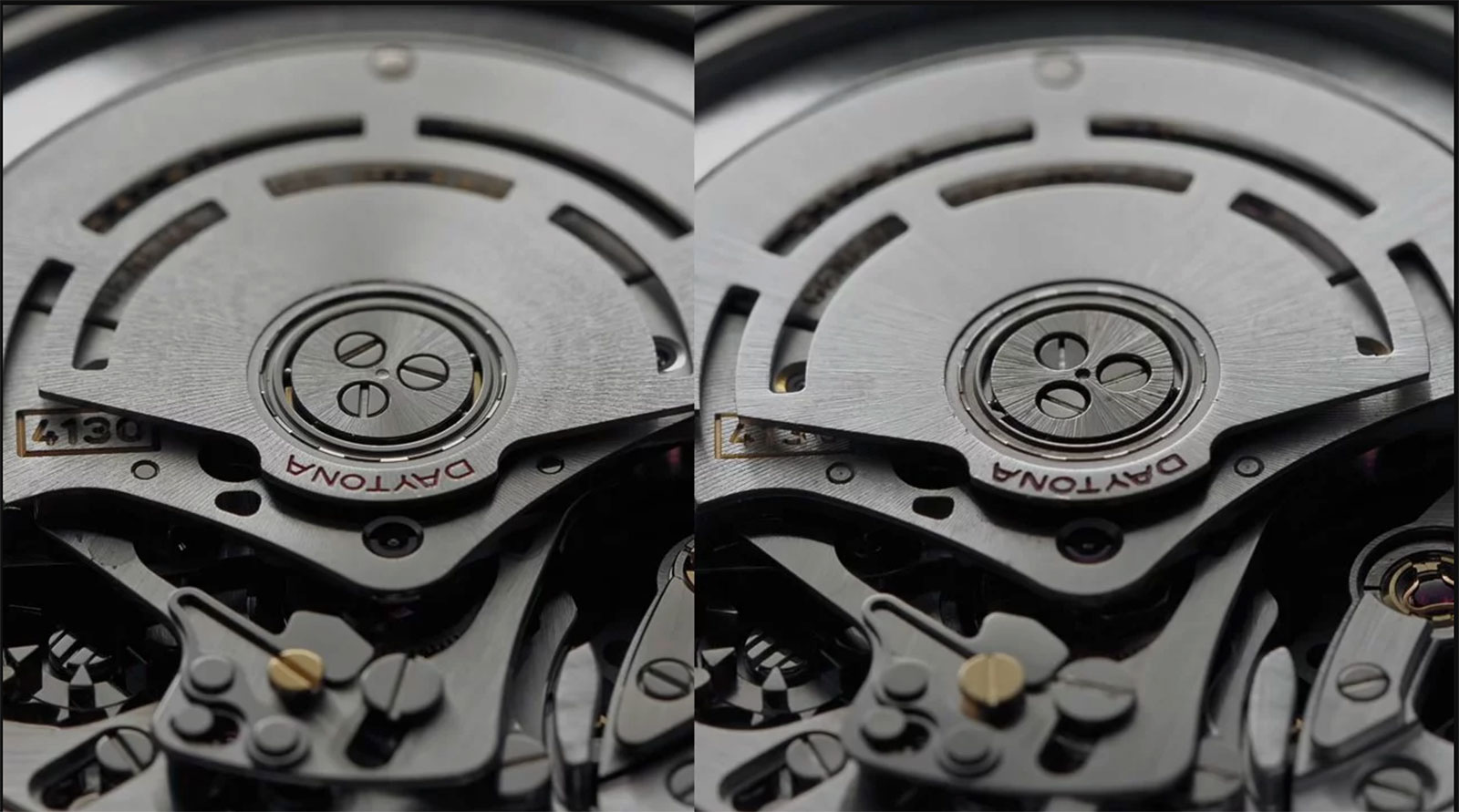 All of these factors certainly make a case for brands to step in as well with certified pre-owned programs. It is after all also beneficial to them given the huge size of the pre-owned market. Richemont Group had this in mind when it acquired Watchfinder, the biggest retailer of pre-owned watches in Europe. Omega has made some steps in its authorizing of a vintage watch seller in London. The Peak Magazine also reported on brands like Audemars Piguet and MB&F developing plans to start their own pre-owned trade services.

This would certainly help in a bid to minimize the risk that consumers have to face in purchasing pre-owned watches. However, these are only baby steps and the watch industry has a long way to go in terms of weeding out the illicit players who prey on the unsuspecting. Watch brands tend to keep their efforts to combat counterfeit watches under the radar, but in this day and age where the world is far more connected than ever before, perhaps it is time to step up with a louder more active voice that will both benefit their reputations and hopefully, the consumers themselves.

Of course, any efforts will also inevitably affect the prices of watches in the pre-owned market, but that is a topic for a whole other article. 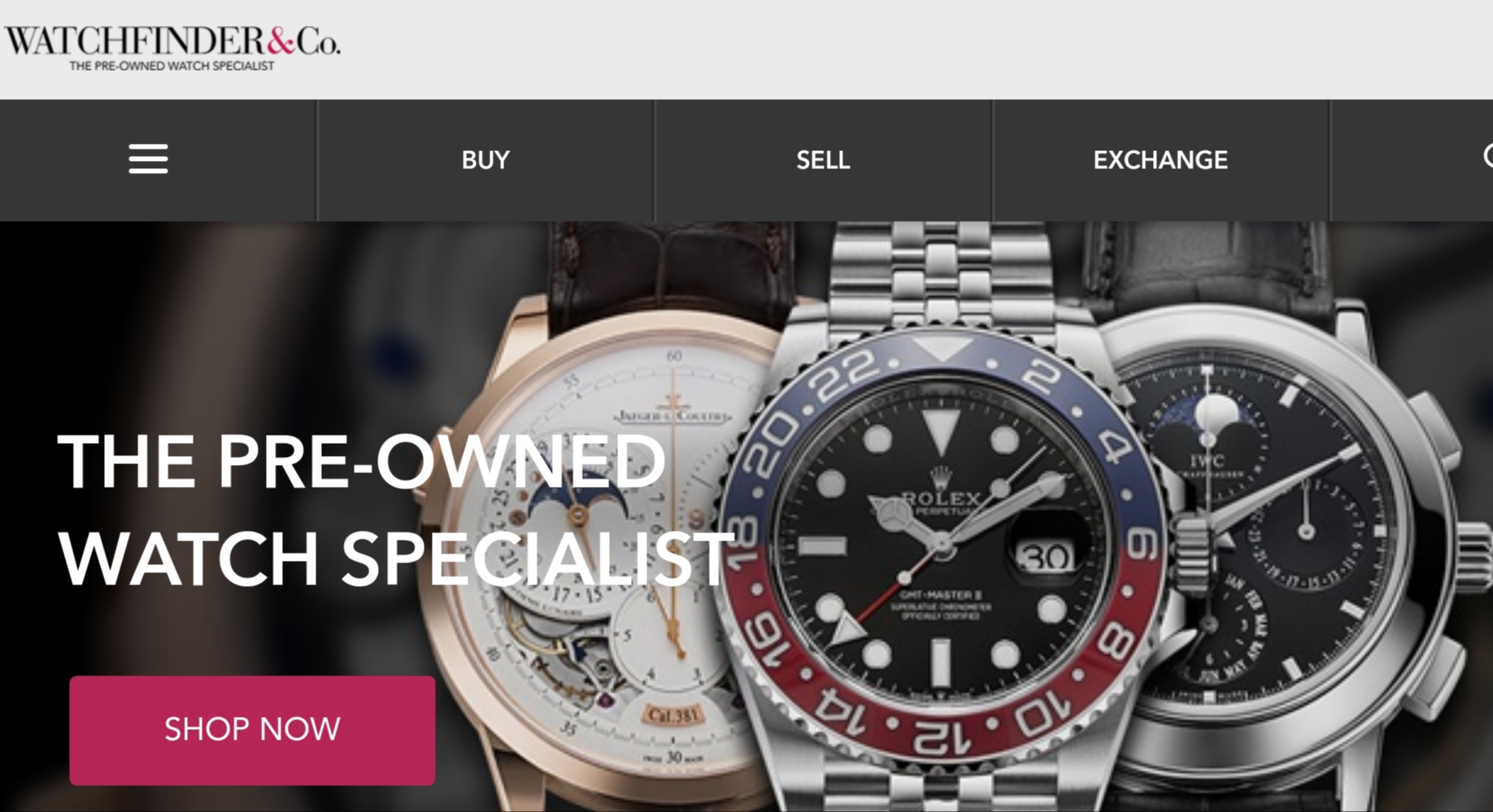 Regardless of how watch brands attempt to combat counterfeit watches, there will always (at least for the foreseeable future) be a market for direct watch sales between consumers. With that comes the inevitable risk of being cheated. If nothing else, this whole incident is a grim reminder that one can never be too safe or certain when dealing with others especially if it involves parting with hard-earned money.

Every successful scam in history is premised on trust, and it is sometimes very tempting to just trust blindly. However, that is a sure way to lose thousands of dollars regardless of whether you are new to the hobby or a seasoned collector. As such, I have summarized three important points to always remember if you do choose to buy from the grey market:

Ultimately, such instances always leave a bad taste in the mouth and have the potential to turn people off this hobby. However, with greater awareness, and a collective watchfulness on our own as well as our fellow enthusiasts, we can hopefully minimize such occurrences and get back to our enjoyment of watches.

The full message thread of how this story broke can be found here : https://www.rolexforums.com/showthread.php?t=722353