Update: There has been a further addendum added to this article as another reader has found yet another video that has had its content lifted, read to the end.

We do not normally do full article “bumps” we just let the chat continue in the comments section, however, some of the comments on our original article deserved some further analysis and comment.

So to quickly recap, our original story was a brief “expose” and a bit of a dig at a recent Watchbox video which featured “employee of the month” TGV doing a Patek worldtime review, in which rather than using all original content he in fact lifted an image from Glasgow watch maker anOrdain, without permission or indeed credit.

It was all a bit of a gas as anOrdain were not terribly bothered about their, great work, being used for a Patek video and we enjoyed poking Tristano about “copyright” issues for which it has been suggested in the past, pre-Watchbox takeover that he has had an issue with…

..and there it rested, we get on with our podcasts, the latest edition touches on the issue again and then blam, we look at a post on the original article who has stuck TGV commentary from the video into google and up has popped large amounts of the script as written and published by a watch journalist from another website, again appearing in the video uncredited.

Our commenter, By Golly, references said article by Johnathon Ho from Deployant.com.

Now perhaps permission has been sought and given in a form which requires no credit, in which case we look forward to hearing from Watchbox to confirm this, but until we get this we will run with the the “a leopard never changes its spots” conjecture.

You can explore the full extent of the use of someone else’s original work by comparing the full audio to this article from Deployant.com here.

For a quick guide start the video at 2minsand 38secs and compare to the screenshot of the article below. 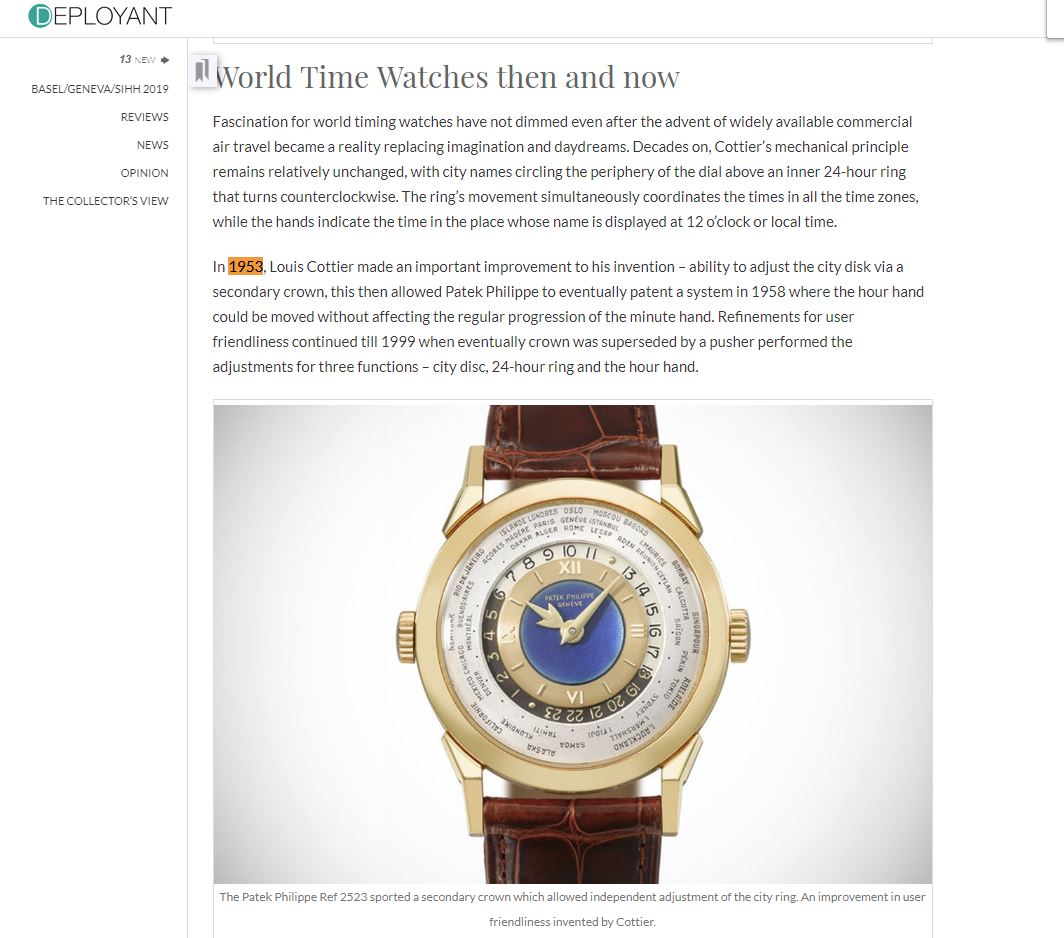 Now this is much more serious, copying the written word from another watch journalist is very much worth calling out again, and as I understand it others have now noted that further scripts used by TGV are also lifted from other non-attributed sources.

Now when this was some photos being lifted by a one-man band running a YouTube channel that was one thing, but this is now an employee of a multi-million pound AD and Pre-owned watch retailer being let loose on all of the WatchBox tech and stock and continuing to operate using other people intellectual property.

So our message is please stop it, credit and pay for (where necessary) the work you are using and passing off as your own, and be sure and send that Patek and or provide a big juicy feature on anOrdain as penance for the work copied from them, as for what the aforementioned journalist may require we will leave that for now.

Since first publishing this article TGV has retroactively went in and edited the YouTube video description to say “thanks” to the author of the article – but by using Google’s Cache we can turn the time back 24 hours and see what the video description looked like then compared to now. 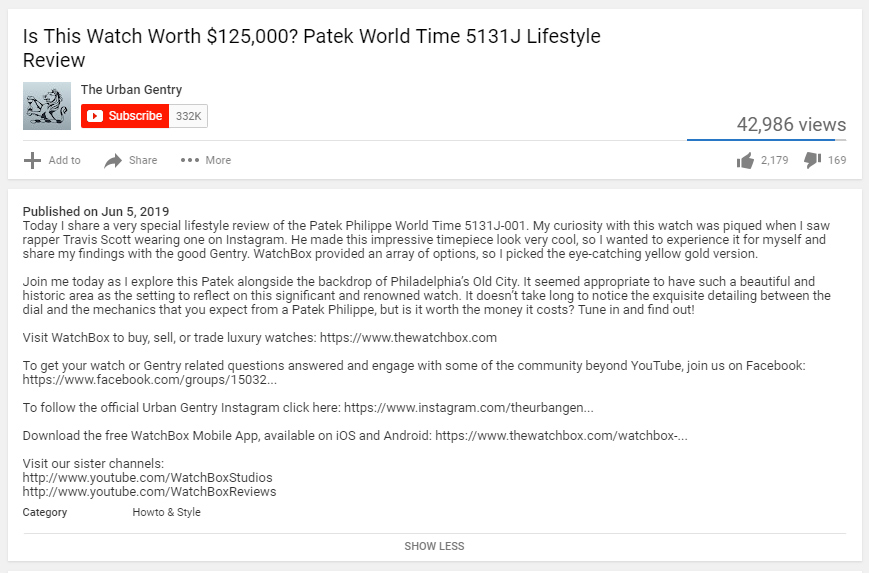 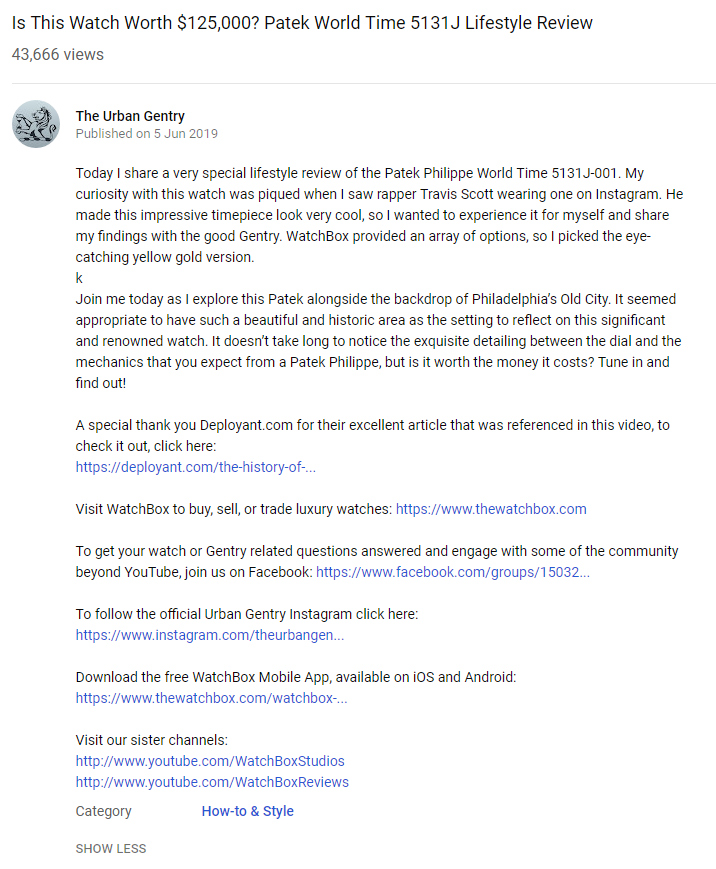 Link to Google Cache (though this will update as time goes on) : http://webcache.googleusercontent.com/search?q=cache:http://www.youtube.com/watch?v=_6-OSDX8M2E

Another of our eagle eyed visitors alerted us to even more TGVness in the comments, this time in relation to his “My Rolex Grail Watch Disaster: Day-Date 18038 First Impressions” video launched on June 1st 2019 :

In this video (around the 8 mins 30 seconds mark) he reads almost verbatim the article published at https://www.petitegeneve.com/en/news/2018-08-02-rolex-day-date-history

And as commenter “Christopher” notes, if you Google for TGV’s spoken words on this video such as “a watch that has retained its inimitable elegance and ability to make a striking statement ever since” it brings you straight back to the Petite Geneve article.

So that’s two for two, and as of the 15th of June, TGV has not edited the YouTube video description on this one to retroactively give heartfelt thanks to the source he has ripped off. 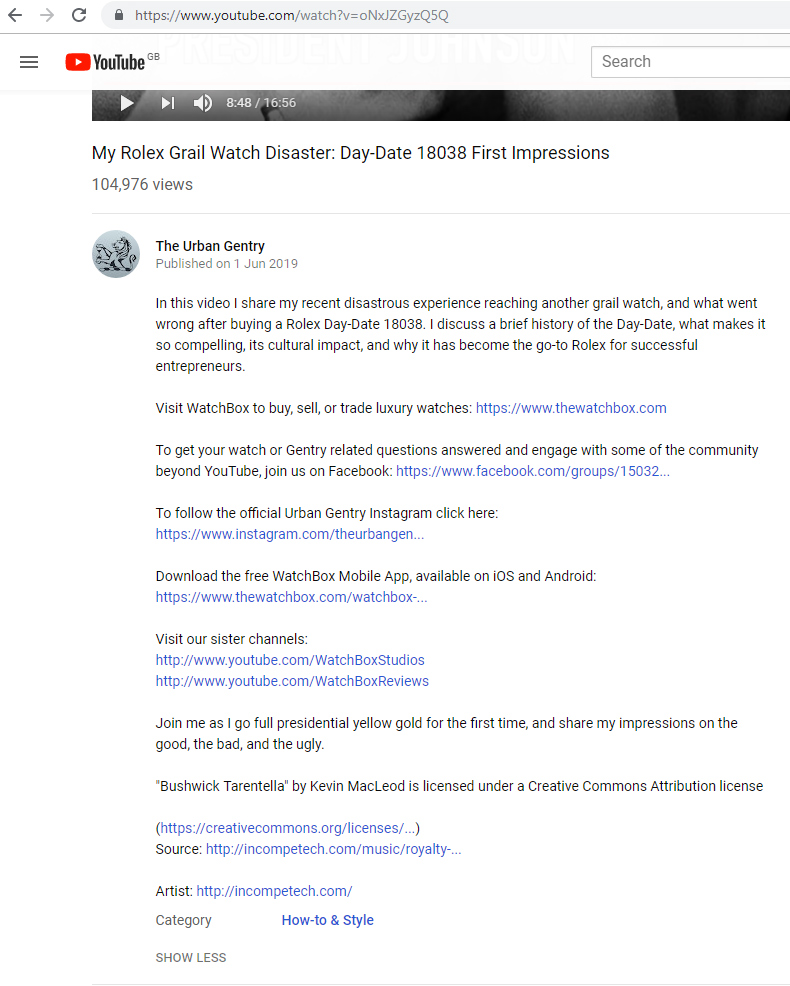 Who’s next? Who can tell. But if you spot anything amiss then be sure to drop us a mail or comment!

Ok, Ciao, (we are fairly sure this is not trademarked yet….now there is an idea!)