My interest in mechanical watches began with a dead battery, so it might seem strange that I’m talking quartz. But in the great balancing act between engineering, design, pedigree and cost, the Zodiac Grandrally chronograph might be enough watch to tip the scales, even for the mechanically biased. 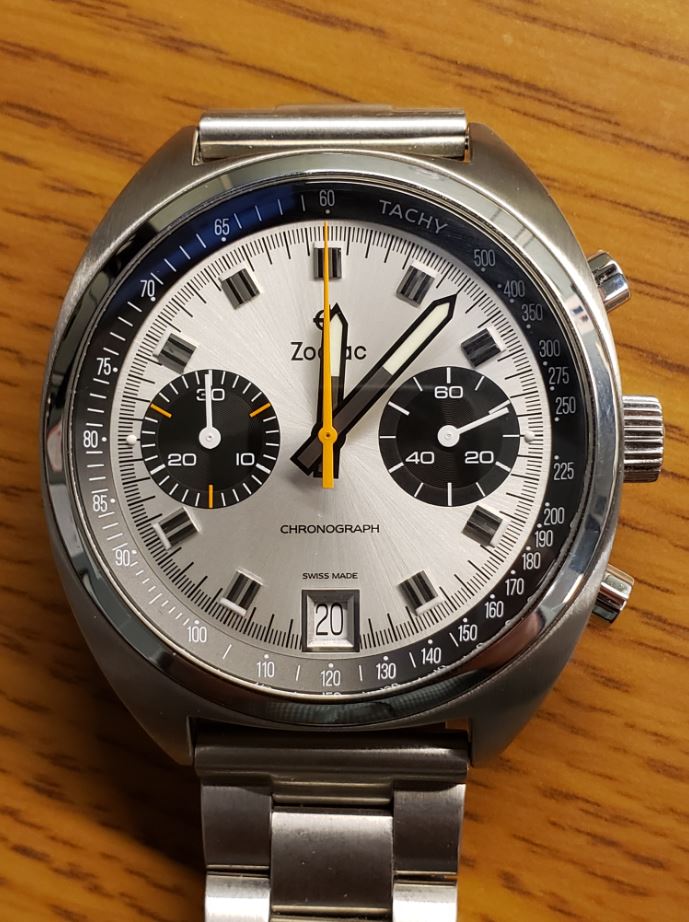 The design of the Grandrally is pure 60s-70s vintage, as are many of their current pieces, such as the Super Sea Wolf 53 Skin or the conversation-starter Astrographic, which was launched 45 years ago. You can also see similar design cues in many other watches of the period, such as the 1967 Sandoz chrono, 1968 Zenith chrono and, most strikingly, the 1972 Heuer Carrera chrono*. However, Zodiac has a lot of its own history to leverage, having been founded in the 19th century.

The watch I own is a two-dial semi panda, with black subdials at the 3 and 9 o’clock positions on a sliver sunburst dial. Zodiac offers eight versions of the GR, including strong blue and green dial versions for those who like a lot of color. The strangest thing about these offerings though is the choice of straps. Three come in a brushed steel bracelet, two in ribbed leather, and three in more traditional leather. Thing is, you have to take the watch with that specific strap, no swaps. That seems oddly restrictive, considering the range of dial color options. 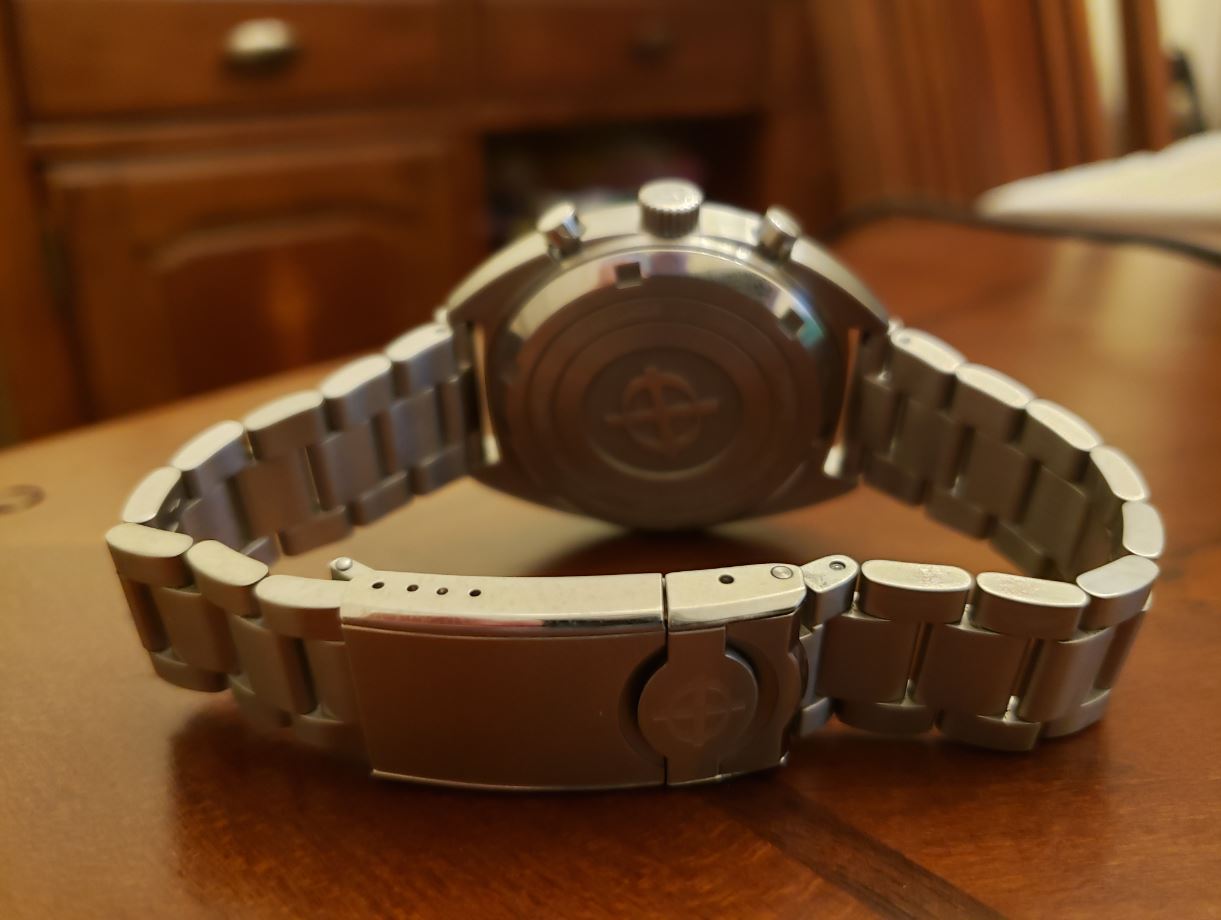 The hands and applied indices provide the strongest vintage cues. The pencil hands are brushed silver, outlined in black with the end half covered in light yellow lume.  With the two tones and strong, black outline, the hands seem almost more like graphic art than watch hands.  They are true to the vintage period, as are the almost square, faceted indices, each with two thick black lines.

Each of the indices has a thin strip of light yellow lume on the outside, and the indices at 3 and 9 o’clock have been replaced by dots of lume to clear space for the subdials. You might not love this watch if you are a complete lume junky, but the dash like lines and two dots create an interesting Morse code look in the dark. The lume on the hands, however, is quite bright, and from that perspective, you can easily tell the time in all lighting conditions. 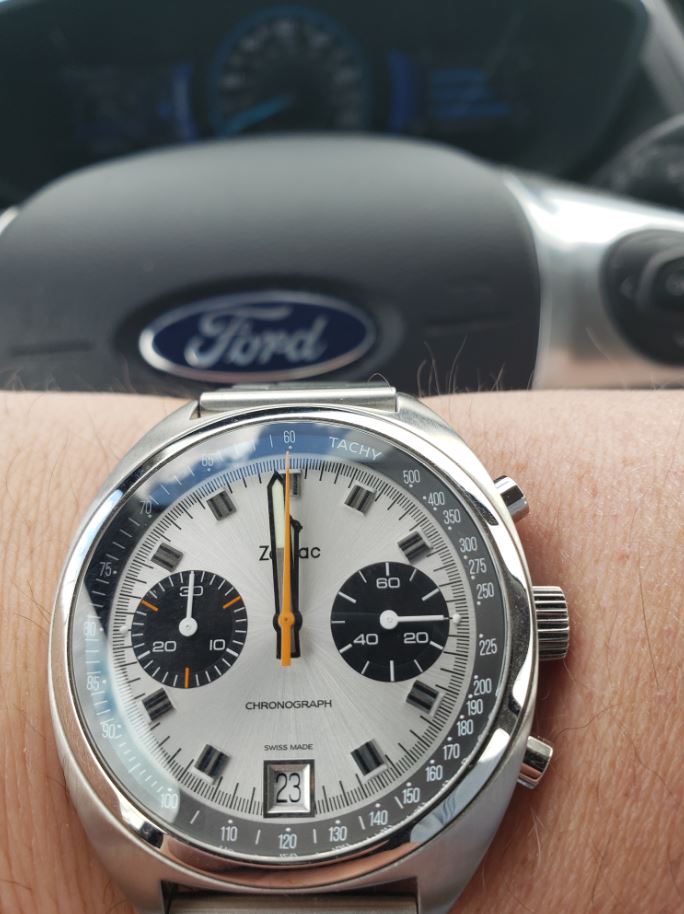 The black subdials in this variant feature concentric circular grooves; I’m not sure this is true of the other varieties, based on photos on the site. That black is echoed by a black Tachy chapter ring requisite with any self-respecting chrono. After all, who doesn’t want to determine land speed over the measured mile? Let’s be honest, the best use for the chrono functions is seeing how long that manager is really going to go on after he says, “One quick thing.”

As this is a 60s-70s vintage, you need to have orange, in this case in the sweeping second hand and dash tick marks at the 5-, 15-, and 25-minute positions on the 30-minute subdial. It’s a pretty subtle use of color, but it also makes for a more classic and less time-bound appearance. After all, the extremes stand out more and remain in fashion for a far shorter time. How many of us pine for mustard, brown and orange together again? That said, the only version of the GR that has sold out is the black dial version with the orange chapter ring and baby blue subdual outlines. So, maybe you can’t have too much orange?

The Grandrally’s steel cushion case is brushed, with the exception of the bezel and chrono pushers, which are polished for a nice contrast. The pushers are also faceted and nicely reflect the light. 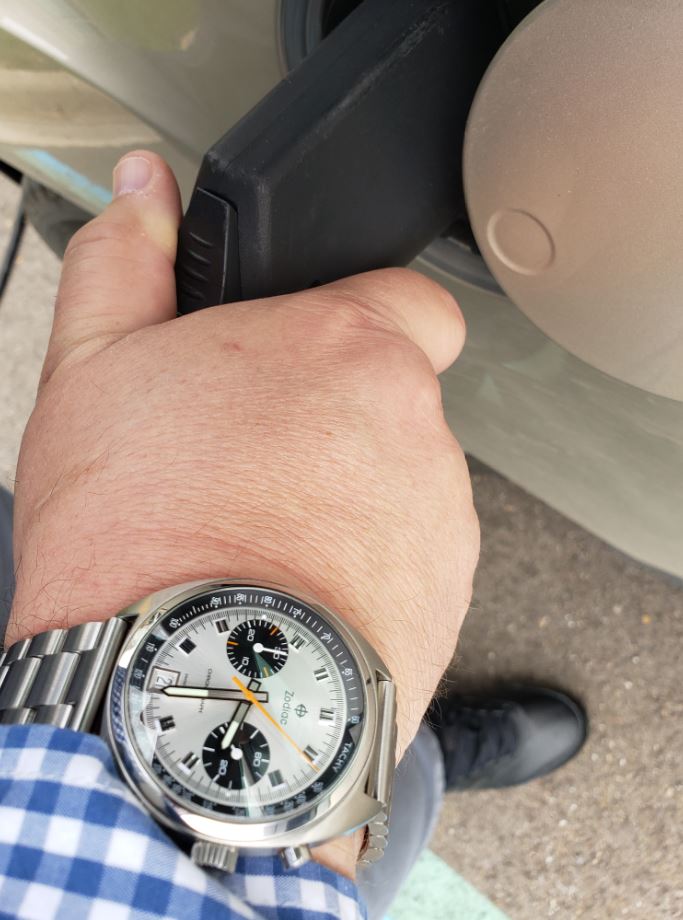 The date window is nicely framed in silver, though I wonder if a black date wheel might have better aligned with the chapter ring and subdials than the white they used. But this date window underscores the strength of this watch: attention to detail, and lots of it. The date window, faceted pushers, subdial grooving, sunburst dial, detailed indices – signs of a company that takes the little details seriously. You even get four Zodiac target logo treatments between the dial, screwed down crown, nicely engraved screwed on back, and bracelet strap. There’s a lot of nice detail, but never too much. The result is a relatively clean look for a chrono.

The one characteristic of the GR that will immediately turn off some watch enthusiasts is the quartz movement. Of course, one of the strong elements of quartz is that it’s accurate, cheap and reliable. It’s hard to find mechanical chronos around the price of the GR, $595 USD with the bracelet, $495 USD in leather. Though I can’t say myself, I’ve heard some suggest that inexpensive mechanical chrono movements are not entirely reliable. Throw in those two magic words that the GR can boast on its dial, “Swiss Made”, and the competition really thins out, making quartz a strong play at this price point.

One final consideration. There are chronos that have a stronger motorsports identity. Microbrands Autodromo, Straton and Belmoto (sister brand of Magrette) come to mind. And of course, there’s TAG Heuer. There are inexpensive quartz chrono’s that are dressier, like Tissot’s, and some that are field watches. To me, the Zodiac stands out from these: too chrono to be a dress watch, too dressy to be a field watch, and not enough oil under its nails to be very motorsports.

But it’s that unique character that keeps bringing me back to Zodiac offerings in general. In a world of samey, samey watches that feel like homages to homages, Zodiac watches have an individual identity. That kind of originality is worth exploring, regardless of the engine under the hood. 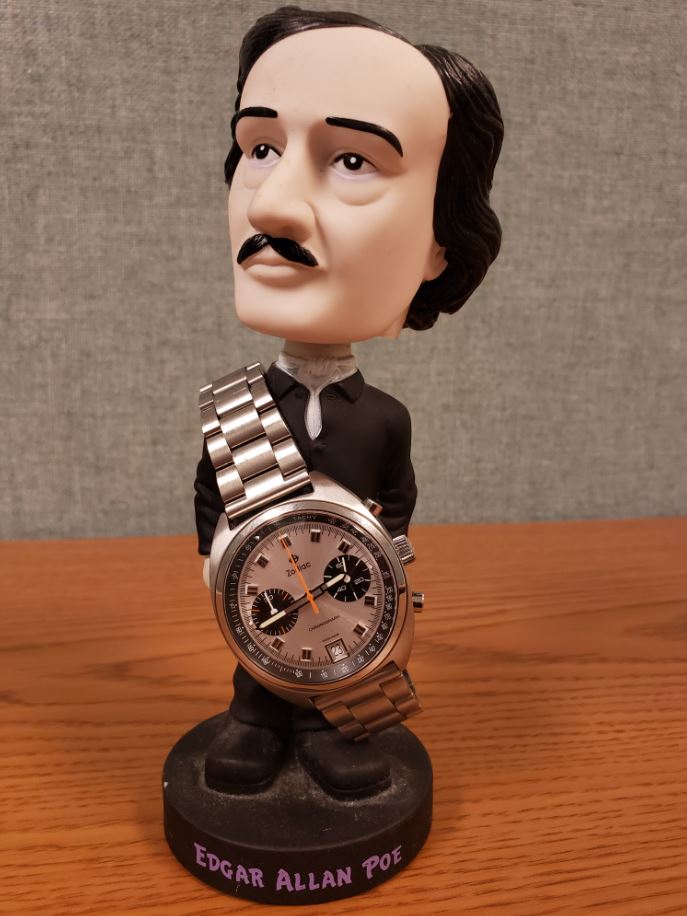 Thanks to a couple resources I used in developing this review: Dan Henry’s epic Timeline. Watch and Butch Dunn’s http://www.vintagezodiacs.com/

*Did they or didn’t they? The story is that Heuer built some watches for Zodiac in the 1970s. According to the vintagezodiac.com website, it’s an urban legend. However, in a listing for a vintage Zodiac on Hodinkee, it is referred to as fact. Regardless, there’s no denying how strikingly similar some period Heuer and Zodiac chronos are.