These skin-crawling abominations of pure aesthetic horror will keep you awake at night.

The appeal of the not-so-humble chronograph isn’t all that hard to understand. From a horological standpoint, the opportunity it presents for watchmakers to flex their technical muscles has yielded a great many innovative and tantalizing mechanical movements, coveted by collectors. From an aesthetic standpoint, the iconic “three subdials and two pushers” template evokes classic motorsport cool. It really is no surprise that the format is so enduring and that it’s such a go-to for the kinds of ultra-cheap men’s fashion watches AliExpress is overflowing with.

The problem is that, from a design standpoint, chronograph-style watches are difficult to get right. With each new subdial added, with each new series of numerals or text required, come more and more design decisions to be made, and ultimately balanced with each other. As the dial fills up, questions of colour, texture, and overall proportional harmony become crucial, in order to preserve everyday dial legibility and a sense of visual cohesion that is easy on the eye. That is to say, the margin for error with chronographs is, in my opinion, particularly high, and with so many iconic and beautiful designs burned into our collective consciousness, you could argue the stakes are higher too.

When a chronograph-style watch is bad, it’s…really, really bad; and in the world of faceless AliExpress retailers, where the hastily assembled £20 frankenwatch reigns supreme, design budgets aren’t exactly through the roof.

So, join us, as we venture deep into the seventh layer of product design hell, and look at three of the most cursed chronographs I’ve seen on my voyages- and believe me, there’s more where these came from. You will see unnatural sights that confound, frighten and sicken: are you brave enough to step into the inferno? 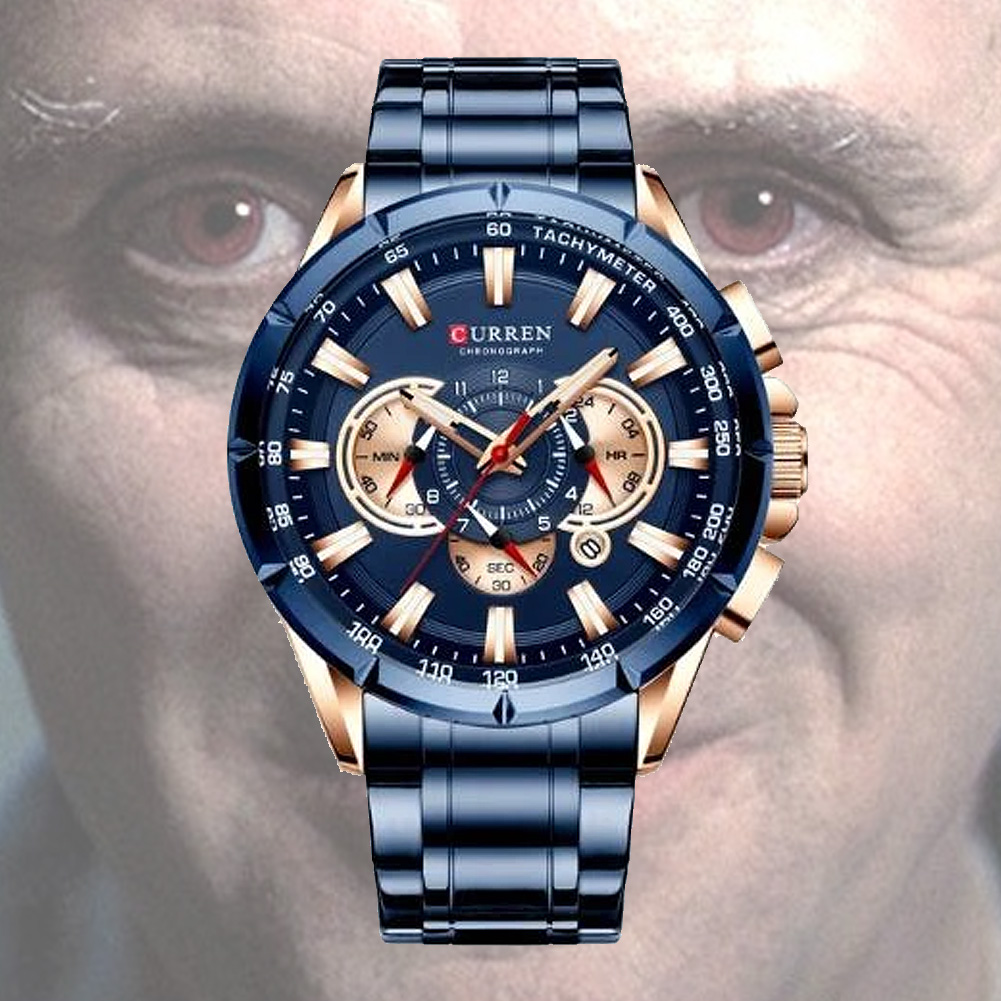 Let’s start gently. The Curren CUR181 is described by the brand as “not only a concrete expression of the concept of fashion, but also a natural manifestation of noble temperament”. Combined with tag lines such as “BORN GREAT”, “MORE UNDERSTAND YOUR HEART” and “APPEARANCE LEVEL IS MORE QUALITY”, I feel like Curren may be sharing a marketing office with the folks at Vincero.

The CUR181 is already a bit messy on first inspection, but it reveals its true existential horrors slowly, entrapping its victims with misdirection, like the caudal lure of a python. It’s frankly the closest thing to a horological PSYOP I’ve ever seen. Its chronograph minute, second and 24-hour subdials are all violently intersected by a fourth, central subdial of sorts: one that contains, er, the hour or minute markers. That’s right: the hour and minute markers are *underneath* the hour and minute hands, thereby rendering the mundane act of time telling more of a mind game of deduction and approximation. 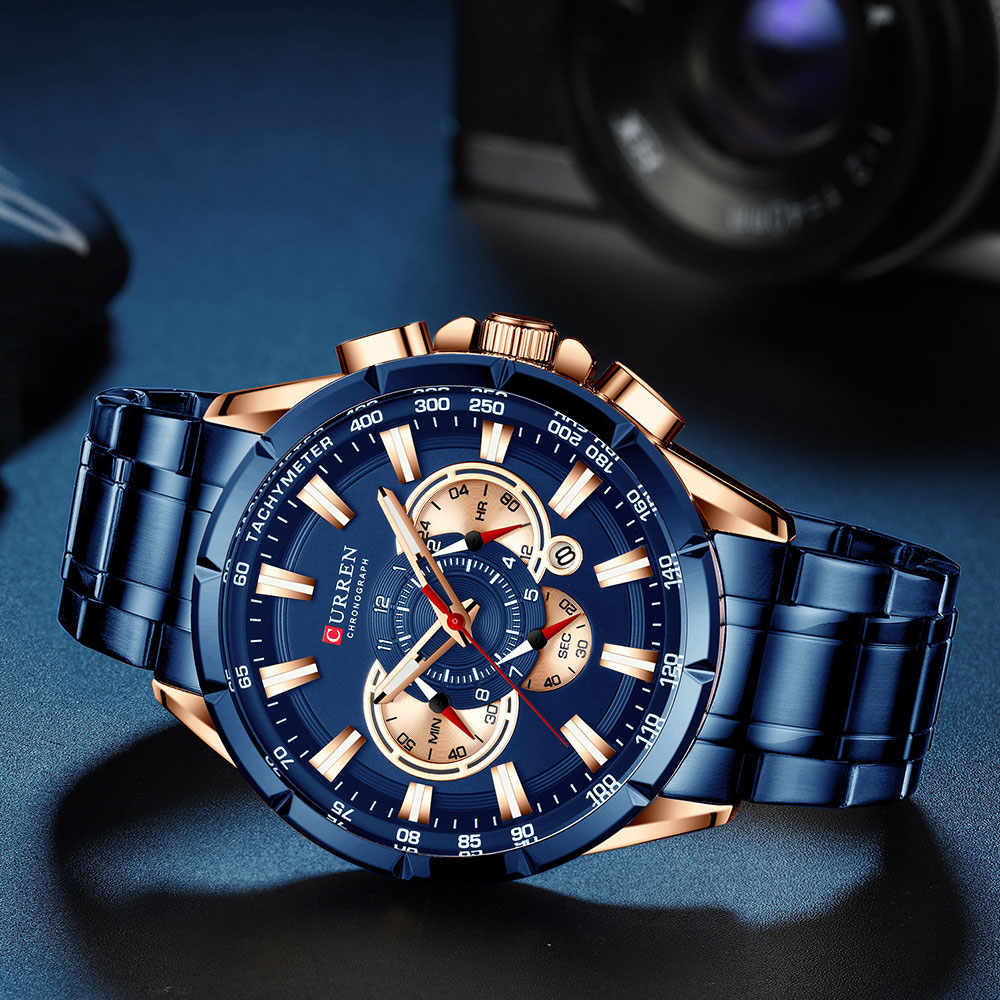 Furthermore, the fact that all other subdials are not only partially obscured but also adorned with bi-directional hands makes the CUR181’s intentions clear: it wants you to suffer. This watch taunts and torments its wearer. “Can you ever truly be sure of the time?” it asks, with a sneer, as you nervously glance at your wrist a second time. “Hey, why don’t you start my chronograph? You can’t actually use it, but why don’t you try it anyway, maybe this time will be different…” The presence of an inner-bezel tachymeter, despite the chronograph pusher apparently controlling the subdial and not the centre seconds hand, is truly the sour cherry on top of this Hitchcockian horror.

That’s right, we’re taking a detour into the dark and nasty world of drop-shipped “wooden watches”- there’ll be a separate AliExpress Adventures episode dedicated to these vile creatures at some point I’m sure, but for now we’ll be focusing on this particular aberration. I’ve been unable to identify the manufacturer thus far, only finding it being retailed by numerous different drop-shipping cabals, a couple of whom have referred to it as “W504406” in tech specs, so here we are. 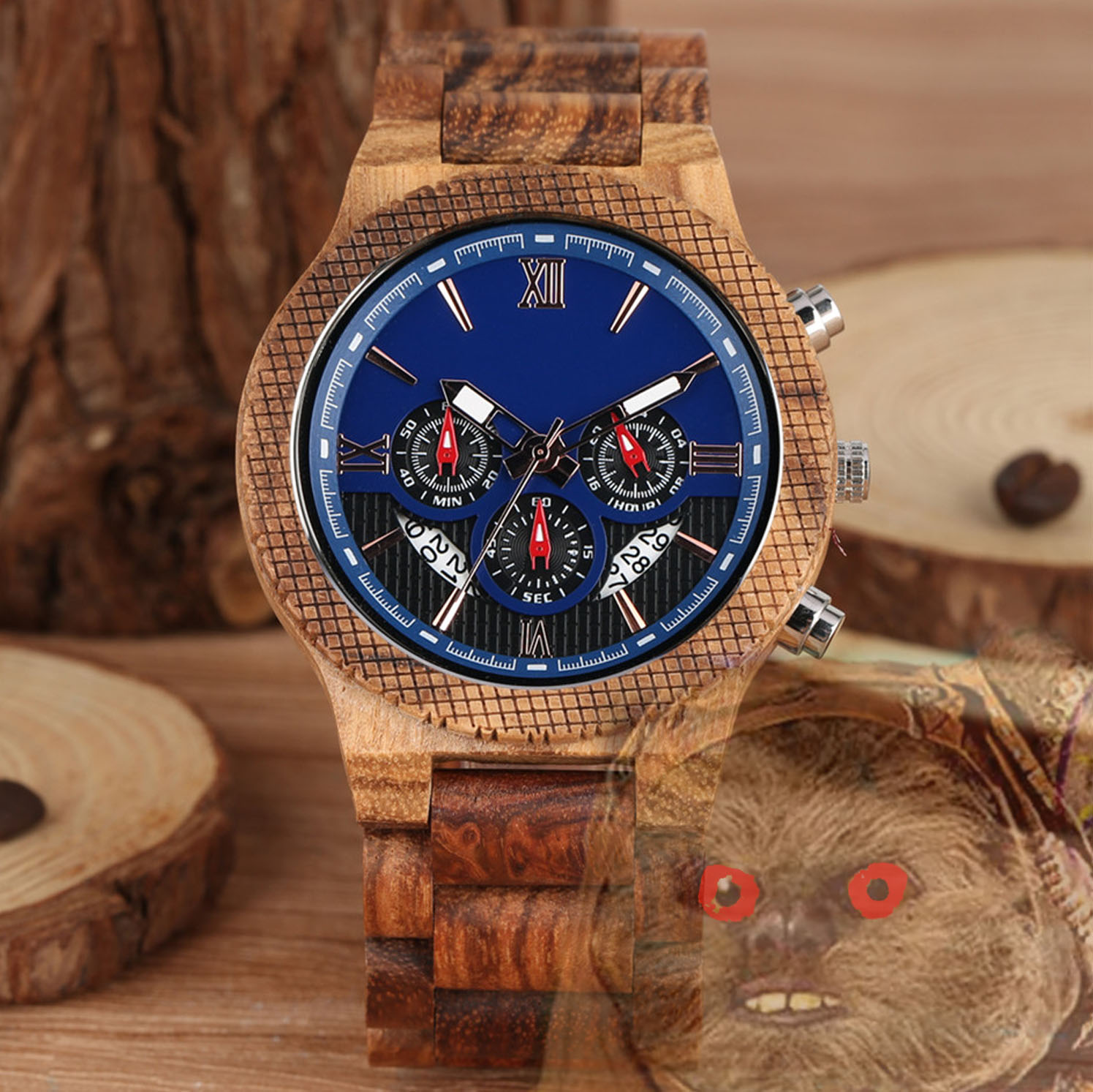 This watch is a masterpiece of pure, distilled ugliness. It turns my stomach even looking at it. The combination of the tacky-looking wood, with that particular shade of blue, with that particular shade of red, with those stubby little pushers poking out of the side like fungal growths, with the inexplicable and functionally useless exposed date wheel, with the seemingly random use of cutaway texturing in the lower 45% or so of the dial, to the way that those eerie little subdials almost seem to leer at you, like red eyes in the dark; the end result is a potent chemical reaction of dread and disgust, than can only be described as some kind of satanic alchemy. Leave us, demon! Leave! 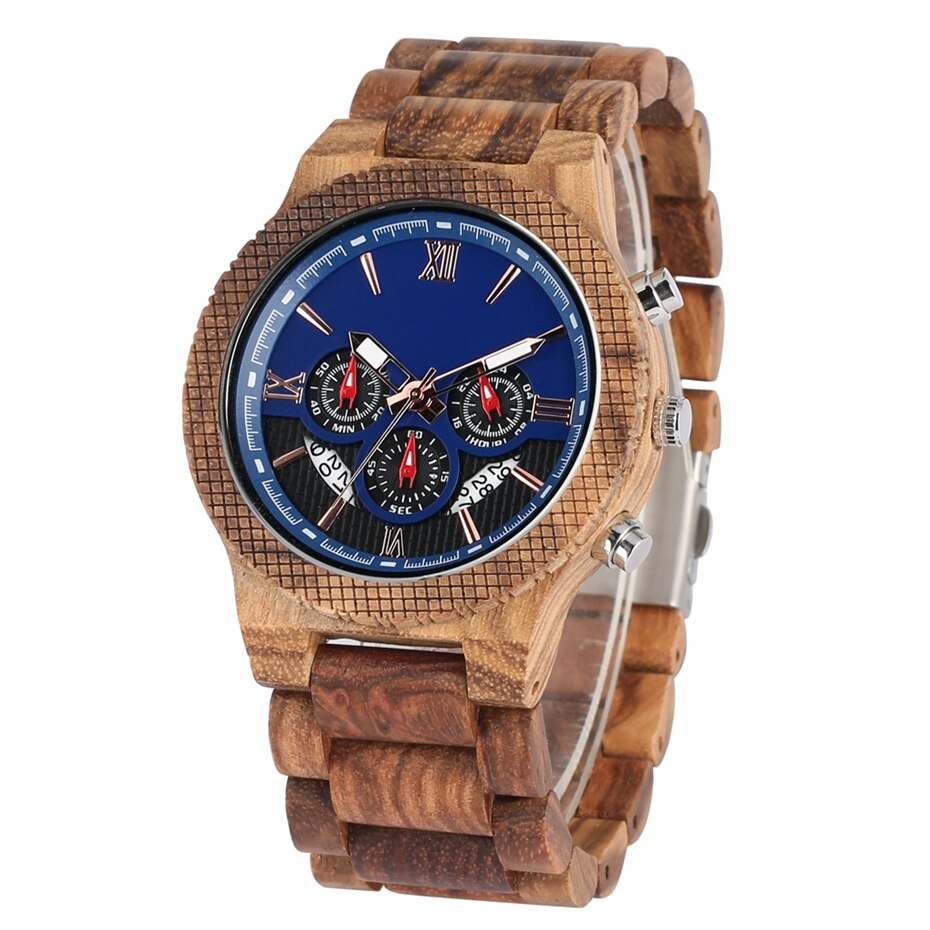 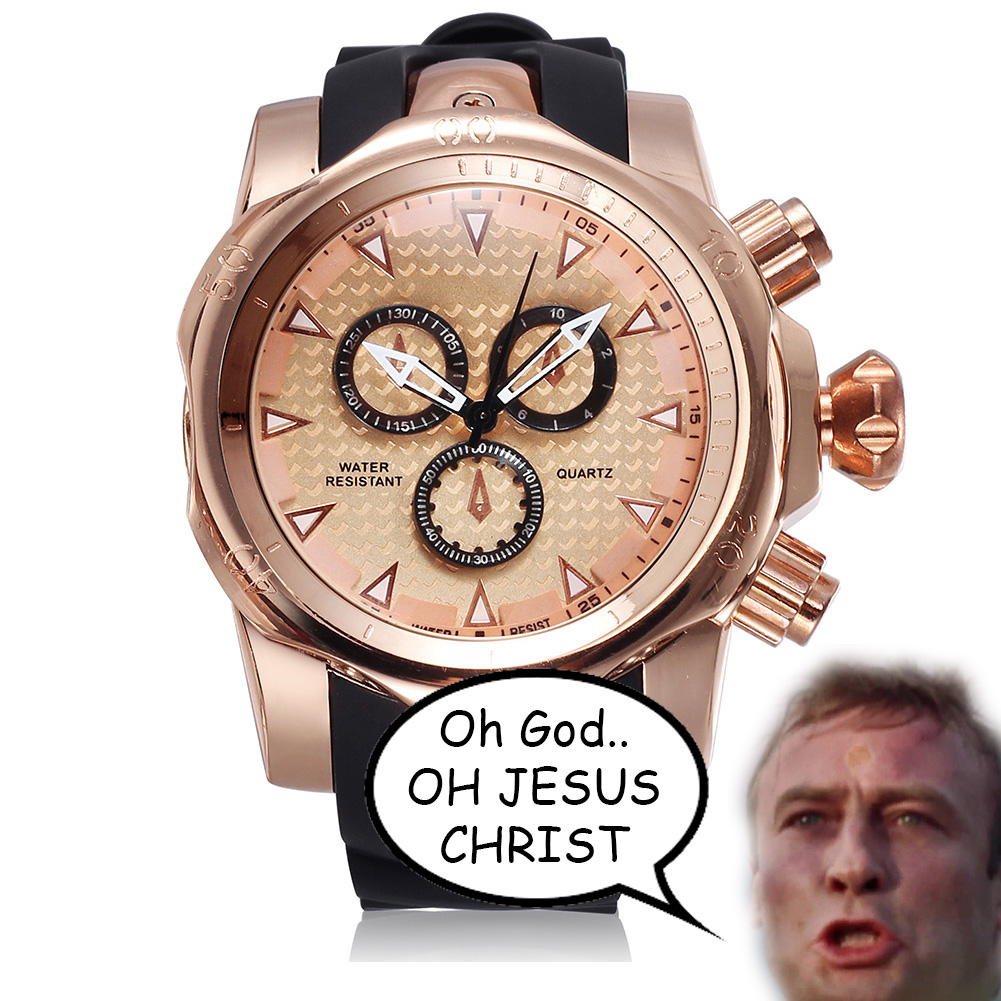 Abandon all hope. Pray to your gods if you wish, but they cannot hear you now. In the presence of demonic beings such as this, light itself flees in terror. Gaze, in your final moments, into its warped, bunched-together subdials, locked in an eternal, anguished scream. Gaze at its anemic rose gold finish. Gaze at its scratched, dusty and blemished metal. Gaze at its misaligned bezel. Gaze at its abstract, numberless tachymeter, that looks as though it was scratched into the metal with the fingernails of one of its victims. Gaze at its pushers and crown, hauntingly reminiscent of antique bathroom taps. As its 52mm (allegedly) dial looms ever closer to you, like a gaping hole in the fabric of time itself, you may start to become aware of the rest of its case. Its 25mm thickness. Its lugs: oh god, the lugs. The gigantic, drooping, unnatural lugs. “How could I possibly wear this?!” you scream as the void takes you, “It’s physically impossible!! What in God’s name are you?!” 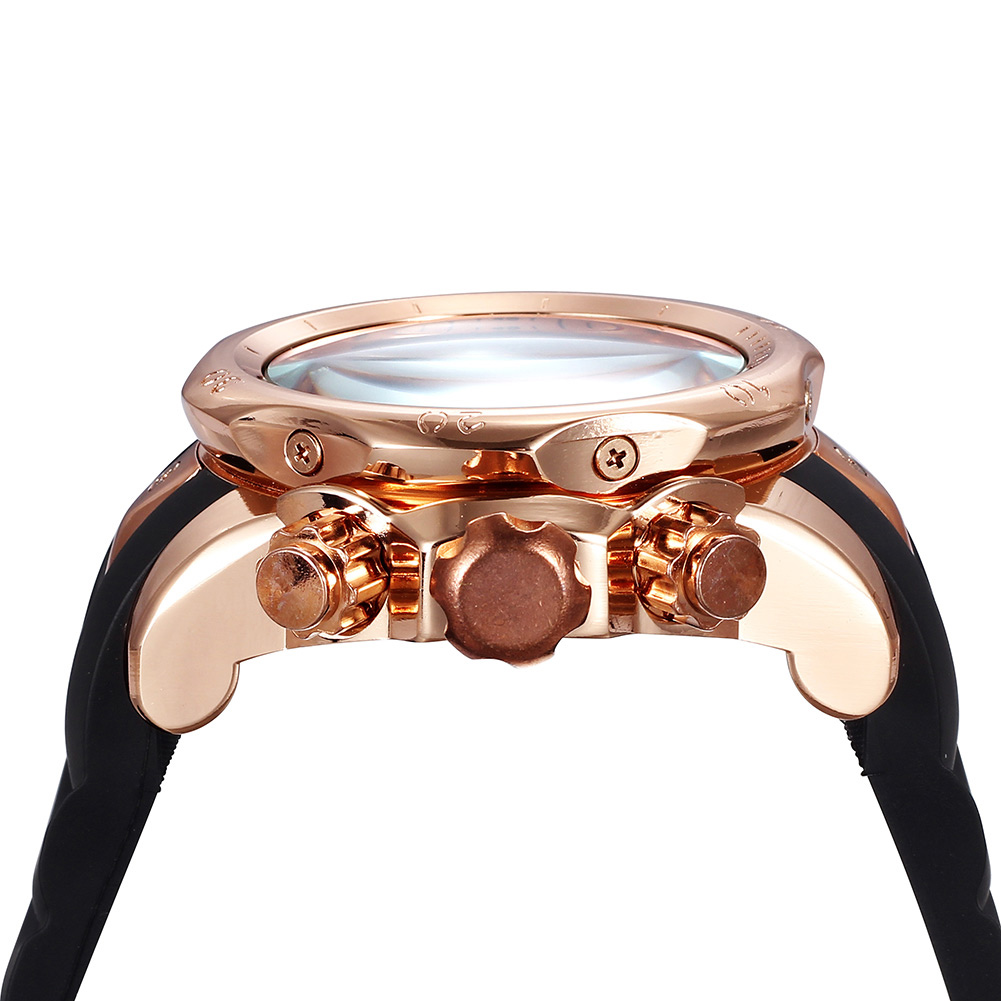 There is no answer, of course. Rather, the void simply replies with the voices of its millions of victims (well, the retailer I was looking at had only sold 7, but let’s not let that get in the way of things), like a demonic chorus of death. “NO water resistantance (not for diving/swimming)”, they cry. “The small dials and buttons are decorations! Battery included in the watch and extra battery as gift! Great gift for you, your lover or friends! Fashionable, very charming for all occasions! It’s worth to buy for cheap and having a good quality!” You scream, but it is too late: the sound disappears before it leaves your lips.