Nearly every watch nerd worth his salt knows about or has at least heard of Aliexpress, the land of dreams where you can find endless bargains on watches of all shapes and sizes. The most popular ones are the “homages” (read blatant knock-offs) of expensive luxury watches such as Rolex, AP and even Patek. There are many factories that make this type of watch, Parnis, Corgeut, Pagani Design and believe or not a company called Bagelsport just to name a handful. The price of these obtainable luxuries is usually in the region of 80-100 USD. 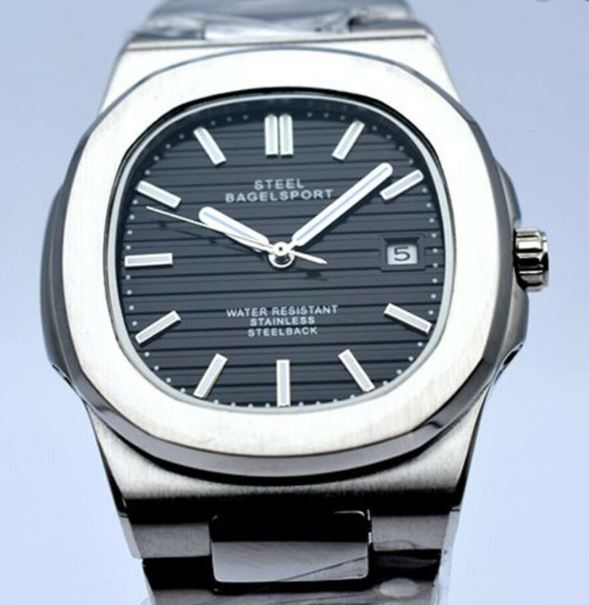 I found out about Ali thanks to Jody, a light-hearted Scotsman living in Australia curator of YouTube channel “Just One More Watch”. Jody’s the man to take advice from if you want to enter this rabbit hole without shooting all the way down and getting hurt. I really encourage you to follow him, he’s a great guy, and the reviews are thorough and informative.

After taking in endless video reviews of what Jody calls Ali-specials, I finally decided to take the plunge and treat myself to one these pieces, mostly out of curiosity to find out what you can actually get for 80 odd Euros. My experience was unnerving, to say the least, read on to find out how things went.

The agony of choice: Aliexpress the adventure begins

The process of finding a watch on Ali is an adventure in and of itself. Try typing “GMT” in the search field and you are greeted by 38 pages of something like this. 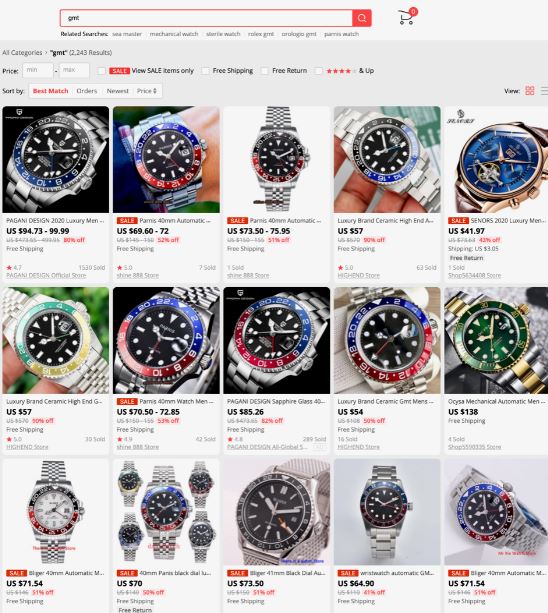 38 pages, that’s over 450 articles, that mostly look identical to one another, but with prices that range from 70 to 700 USD. Just look at the two pieces below 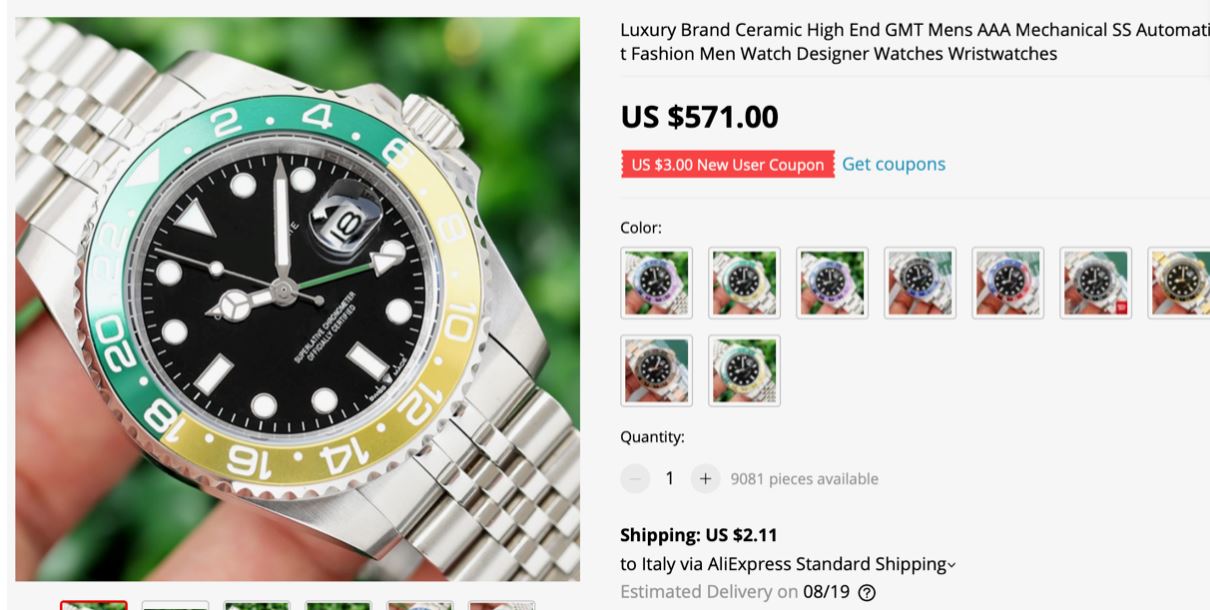 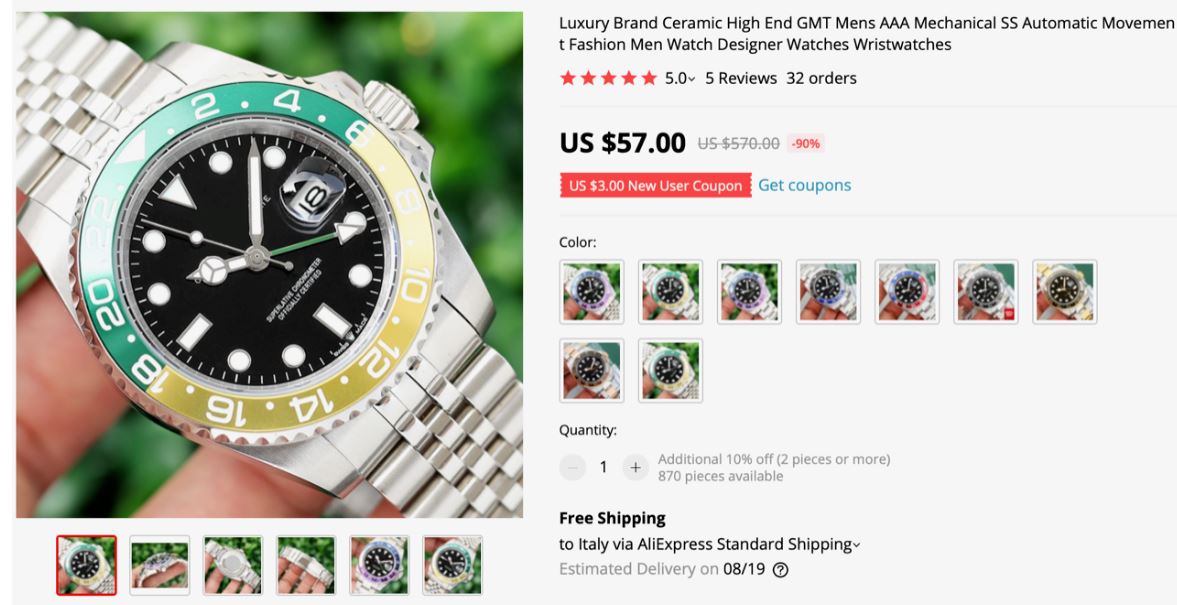 One is priced 10 times the price of the other: photos, description and specs are identical. I challenge you catch where the difference lies, it’s more difficult than a Where’s Wally puzzle! The truth is there is no difference. This teaches us the first rule: even if you have decided which piece to buy never click checkout before making absolutely sure that the one you are intent on buying has the lowest (shipping included) price. New users usually get 3$ discount and there are also regular sales but don’t expect to save more than a whopping couple of dollars on each item.

In the end I decided to play it safe and buy something from an “established brand” directly form their store on Ali. Thanks mostly to Jody’s advice I settled for an offering from Pagani Design. The brand name is an obvious rip-off of Porsche Design, but prefixed by a much more exclusive supercar maker. Just as a side note “Pagani” are barred from selling their watches directly in the EU using that name, most probably due to Horacio Pagani’s legal department giving them a well-deserved bollocking. The EU approved name is an unpronounceable PAGRNE. In the end I pulled the trigger on a 40mm Coke style GMT. 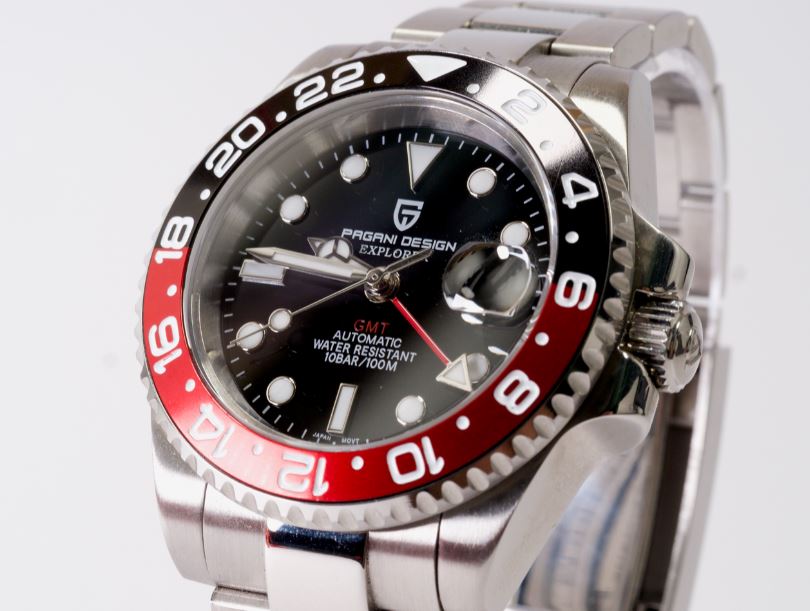 When is a watch not a watch? When the only pictures you have of it are from Ali. I’m no Ansel Adams but I consider myself a competent amateur photographer. These are among the pictures available from Ali for my pick 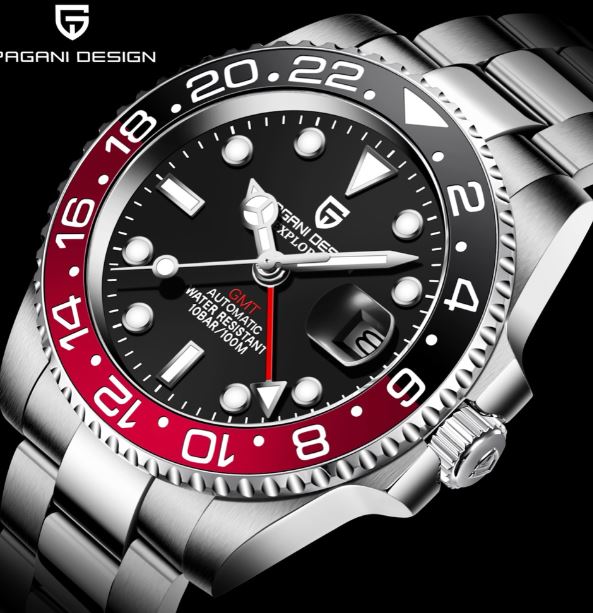 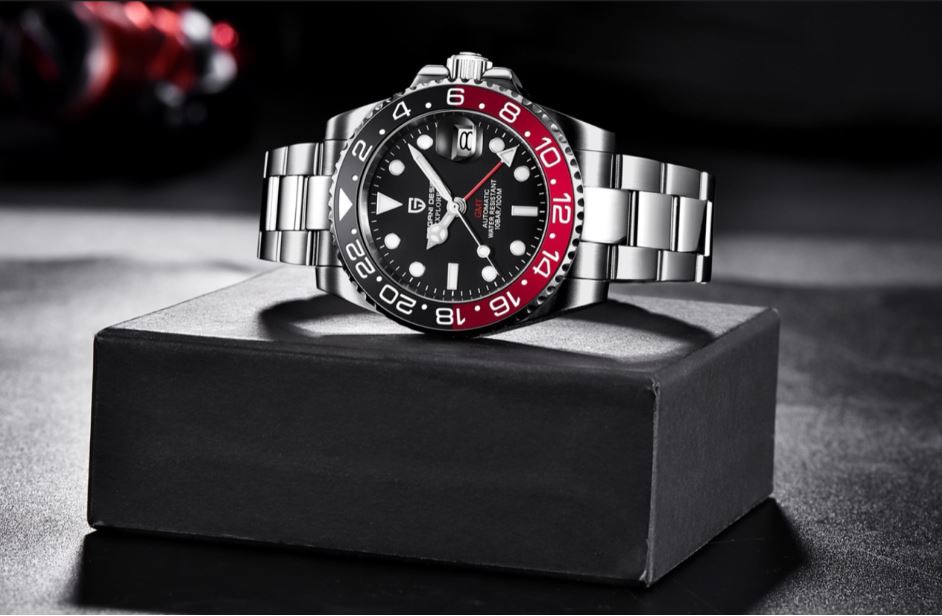 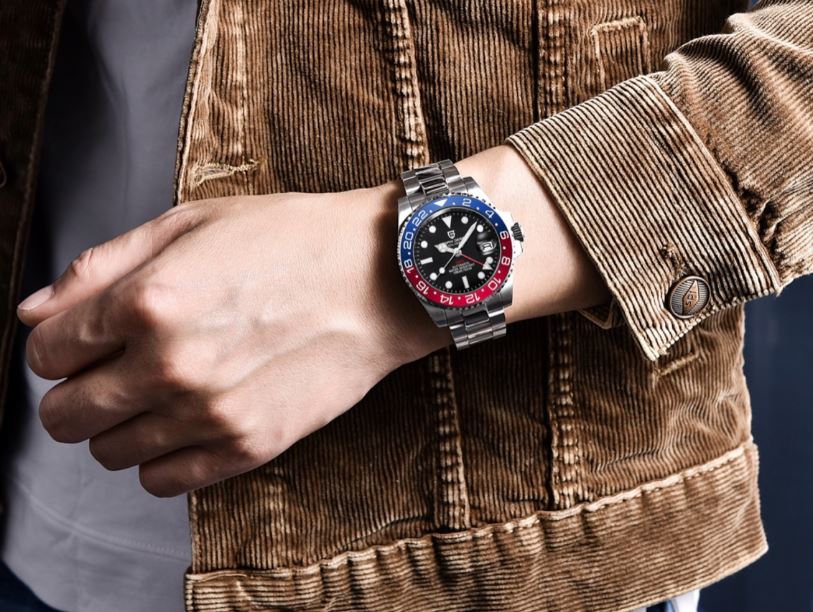 The first is an obvious 3D render, with perfect everything, the second most probably another render photoshopped into a real-life photo. The third one is a hilarious photoshopped wrist-shot, with a 3D rendered watch overlaid upside-down on the wrist!

I did my best to approximate in real life that which Pagani had achieved only inside a PC. This is the result. 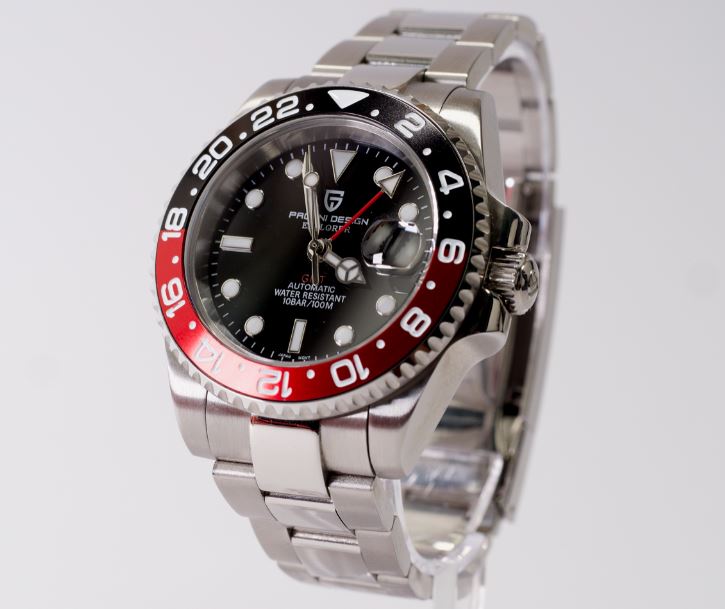 The photos while looking good at a first glance tell a different story. The obvious visible flaws are the so-so linear-brushing, badly fitting solid end-links, dullish finish on the ceramic bezel insert, badly painted number 1 at the 16-hour marker on the bezel and a cyclops with reflections which seen from any angle render the date window unusable. The finishing on the “unseen” parts where the links join each other is quite rough, be sure that the watch you see on Ali will NOT be the watch you will receive.

If there’s one good thing to be said about Pagani is that the specs (on paper at least) are impressive. For 80-90 USD you get an automatic GMT movement with independently settable GMT hand, ceramic bezel, sapphire crystal, full steel construction and a stated 100m of water resistance. I would not put that last spec to the test lest you want to turn you newly acquired watch into something resembling a fish-bowl. 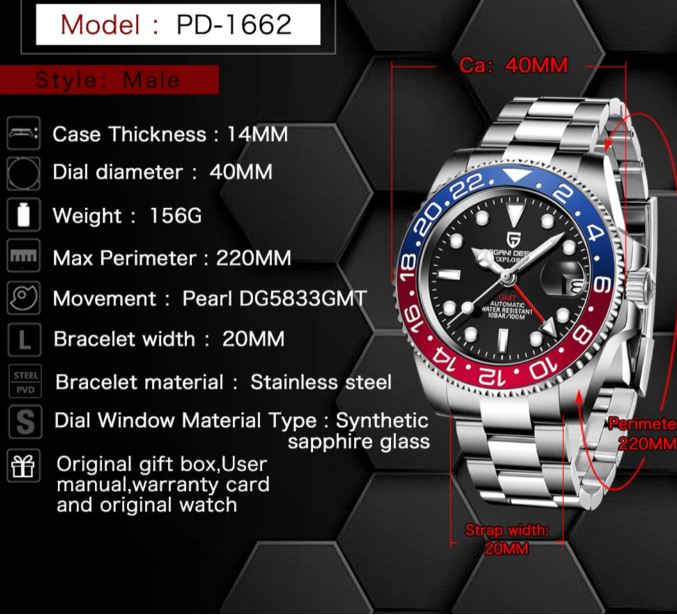 So, say you decide to take the plunge and buy the watch as I did, what next? Let’s get one thing straight right away: Aliexpress is no Amazon. Once you finish the ordering process and pay, the vendor has to pick up the order form Ali and process it. In my case this alone took 3 days but can take much more. Once the order has shipped you can see it proceed, at a snail’s pace, on the Ali tracking page or on a popular tracking utility like 17-TRACK. This information can sometimes be frustratingly misleading. Updates are quite rare: sometimes a full week will pass without updates. My watch shipped on June the 6th from Hong-Kong and was allegedly delivered on June the 17th. But on that day the watch was nowhere to be seen. I was always home so there’s no excuse. I wrote to Pagani asking for an explanation, and the reply was that the watch had been delivered and I had signed for it. Now I may be losing my marbles as I get older but I’m pretty sure that if I had signed for something I would remember it. Next, I called the Italian postal service which told me that the watch was still in Lithuania! So much for that. In the end the package arrived on June 24th 7 days later than the tracking info! The advice here is to order and forget you ever did so. One day you will (or will not) receive a surprise shipment with your shiny new purchase.  My watch took all of 24 days from order to delivery which I’m told is quite speedy by Ali standards. 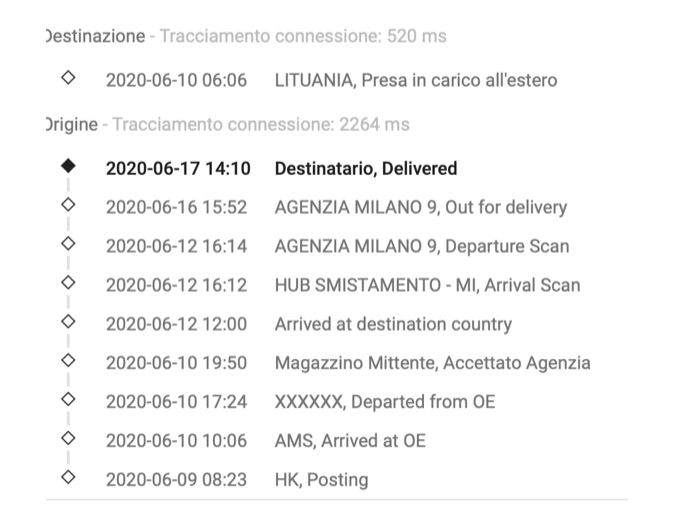 The devil’s in the details

When the watch arrived I was anxious to see what it was like so I did a live unboxing on Instagram to show off my latest purchase. First impressions were very good, but after a more thorough inspection he flaws come out one by one. In addition to the ones mentioned before I noted that, the lume was quite dismal (especially on the markers) even under the full blast barrage of a 365nm 10 watt UV lamp. The clasp and clasp extension were fingernail-breakingly hard to open and infuriatingly hard to close. The clasp itself, when open, was a bit wobbly at the hinges with very loose tolerances. The screw-in links were incredibly difficult to screw back in once I had sized the bracelet: I feared shearing the threads straight off the screws by trying to get them in properly. The bezel action is while not terrible is nowhere near even the cheapest Seiko’s action. Then again the cheapest comparable Seiko will set you back at least 250 euros. Apart from these niggles It’s not so bad considered the bargain-basement price.

cannot teach him, the boy has no patience… 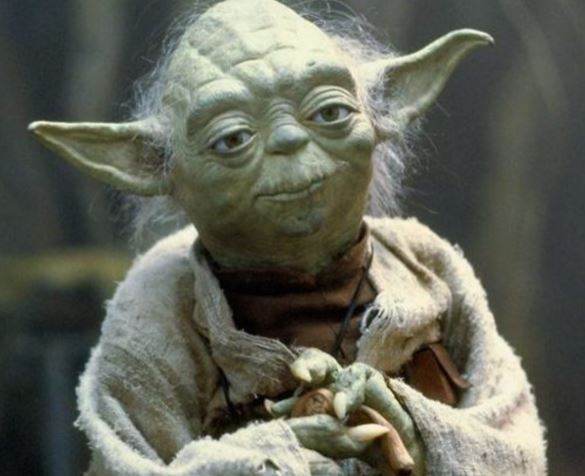 Would I buy this watch again? The answer is no. I knew what I was getting into, but honestly, the long and frustrating waiting times just put me off. If you’re a patient person and have no hurry to receive the watch then, go for it. Subscribe to Jody’s excellent channel for some great tips

But even with a speedier delivery, this half-baked GMT is not for me. Granted you get a lot of watch for just 80 odd Euros, but I’m a stickler for quality and it’s clear that you can’t expect miracles for such a low price. I doubt I’ll be wearing it much. If you are less OCD than me then this could be the watch for you. But don’t, I repeat, don’t buy it if you’re expecting to get a dirt cheap Rolex GMT-Master II because you will certainly be disappointed. As always “caveat emptor”.