These unorthodox collaborative pieces reveal their many delights slowly and subtly, evolving from ornate oddities to surprisingly versatile daily wearers with each passing day. 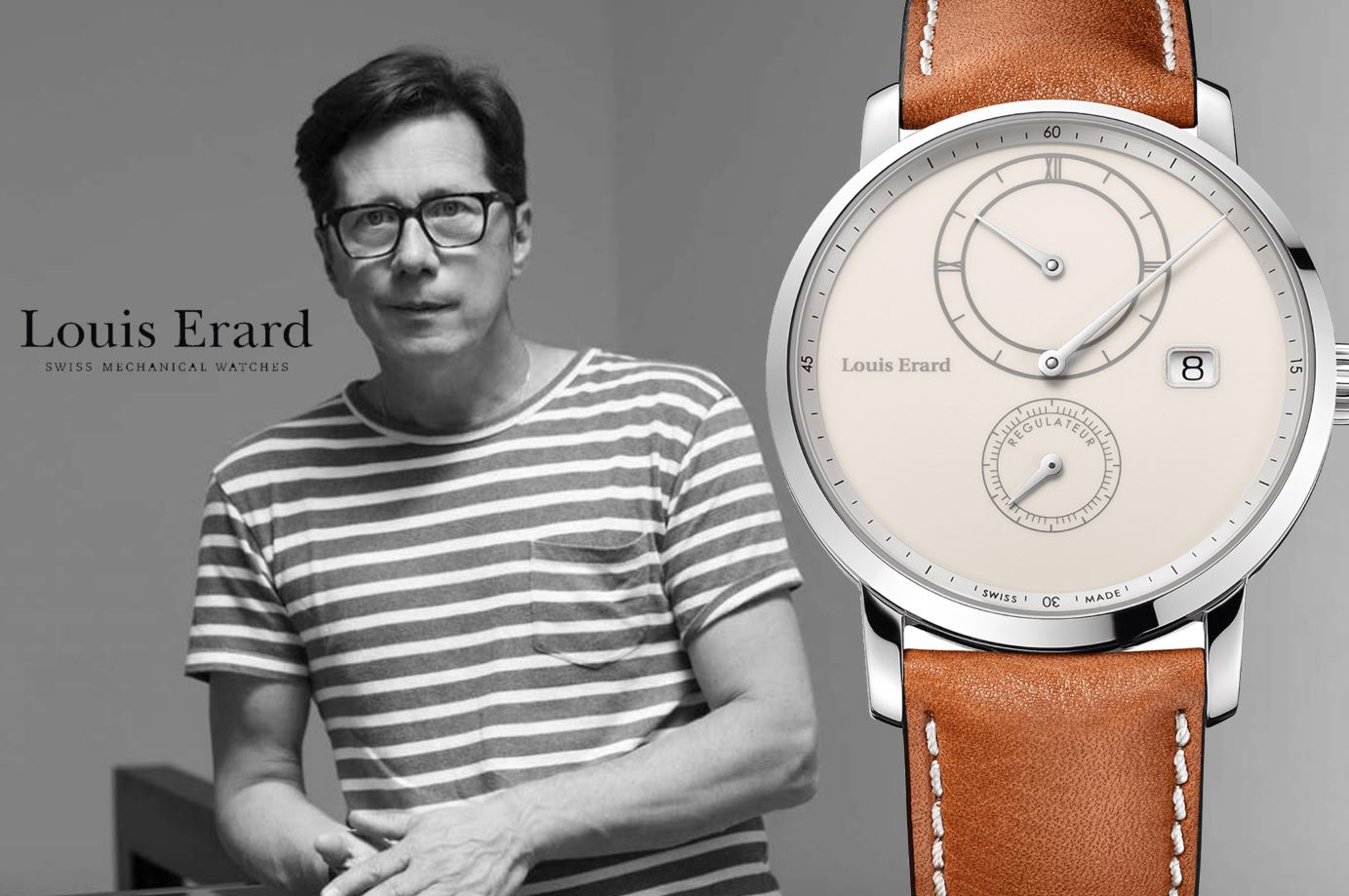 Early in 2020, hip hop’s adulte terrible and would-be US president Kanye West showed Architectural Digest around his new LA home. With interiors conceived in collaboration with the legendary Axel Vervoordt, the house is a stunning work of visual art, from said interiors to its architecture, and represents the end point of a gradual distillation process, wherein all extraneous elements were stripped away in the pursuit of an intangible ideal of “purity”. Kanye proudly proclaims that “the proportions are the decoration”, a combination of words that I’ve been frankly obsessed with ever since. I found myself returning to this idea over the last week, which, thanks to the gracious folks at Apex Luxury, I have spent wearing the Louis Erard x Eric Giroud collection- a series of three limited edition watches that offer intriguing subversion in a manner more evocative of interior design than the kind of exacting product design many watch enthusiasts yearn for.

For many, Giroud’s work needs no introduction. With roots in architecture, the low-key Swiss designer is best known for his extensive work with MB&F, with other past clients including Vacheron, Universal Geneve and Tissot, and his approach to collaboration seemingly revolves around augmenting and tweaking the extant design grammar of a brand to create novel forms, in a manner not dissimilar to the work of someone like Virgil Abloh. This is a pretty good jumping-off point for talking about his Louis Erard collaboration, which sees him engaging in a dialogue of sorts with the Excellence Regulator, Louis Erard’s most distinctive release. Furthermore, the new Excellence Regulators are Giroud’s most high-profile recent collaboration; whilst most previous projects have seen his individuality deliberately obscured in service of the product, the fact his Louis Erard collaboration bears his name so prominently could imply that the pieces represent a more direct line into Giroud’s mind and personal tastes, in a manner not unlike Louis Erard’s well-received collaboration with Alain Silberstein. 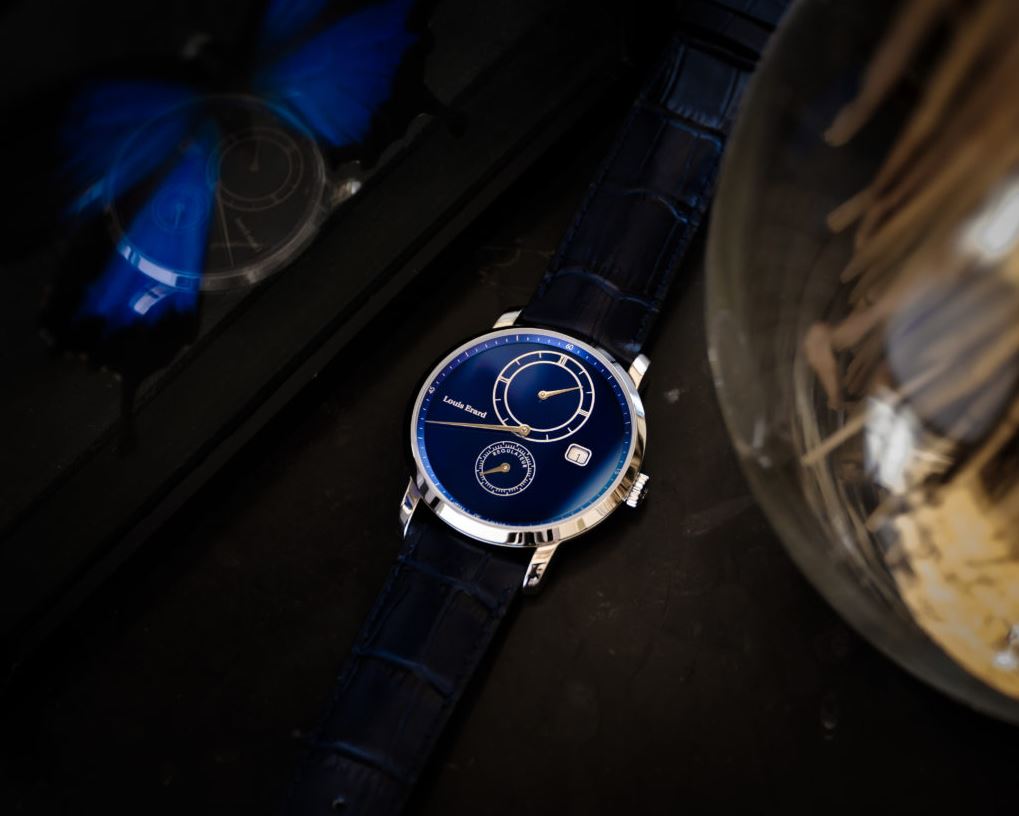 The Excellence Regulator is arguably Louis Erard’s flagship release, and it’s really not surprising that the brand has been using it as the basis for their recent collaboration pieces. It’s a striking and dignified look, presented with a tasty guilloche dial, blued hands and a slightly oversized proportionality that feels not unlike the boardroom-ready energy of a Portugieser Chronograph or similar. The standard model represents the most moderate option in terms of formality, with other Regulator variants leaning either somewhat sportier or into sheer gem-set regality. Regulator displays are not unique to Louis Erard, of course. Some of the most exquisite examples of the format include the Patek 5235 and the enamel-dial iterations of the Jacquet Droz Grande Seconde, which really represent the possibilities for utterly mesmerizing dial design that it offers. The latter is particularly important, as contemporary versions of the Grande Seconde provide clues as to where Giroud may be drawing inspiration from.

Giroud’s minimalistic take on the Regulator seems to be a calculated move to create pieces with attributes falling neatly in between those of all previous variants. In brief, he has drastically stripped down the dial layout, as well as swapping out the power reserve for a date window. The latter decision, which I’ll discuss more later, is probably the most pointed one, representing a clear shift from a more buttoned-up and straight-faced feel to one that is far sportier and more casual overall. The dial layout does away with the texturing and symmetry of the mainline Excellence Regulator models, opting for asymmetrical and slender displays that almost appear to be drifting across the dial. When viewing product shots of the watches prior to trying them out, I found the proportionality jarring and challenging. Us watch folk can be sticklers for symmetry, and these watches certainly do not deliver that. From what I can see, the proportions of each subdial seem to be dictated by the handset, with each of the three hands just overlapping the innermost perimeter of its respective display.  The sleek handset is not the stock Excellence Regulator one, however, and is seemingly bespoke, so there may have been another motivation or rationalization behind the dimensions that I’m missing. 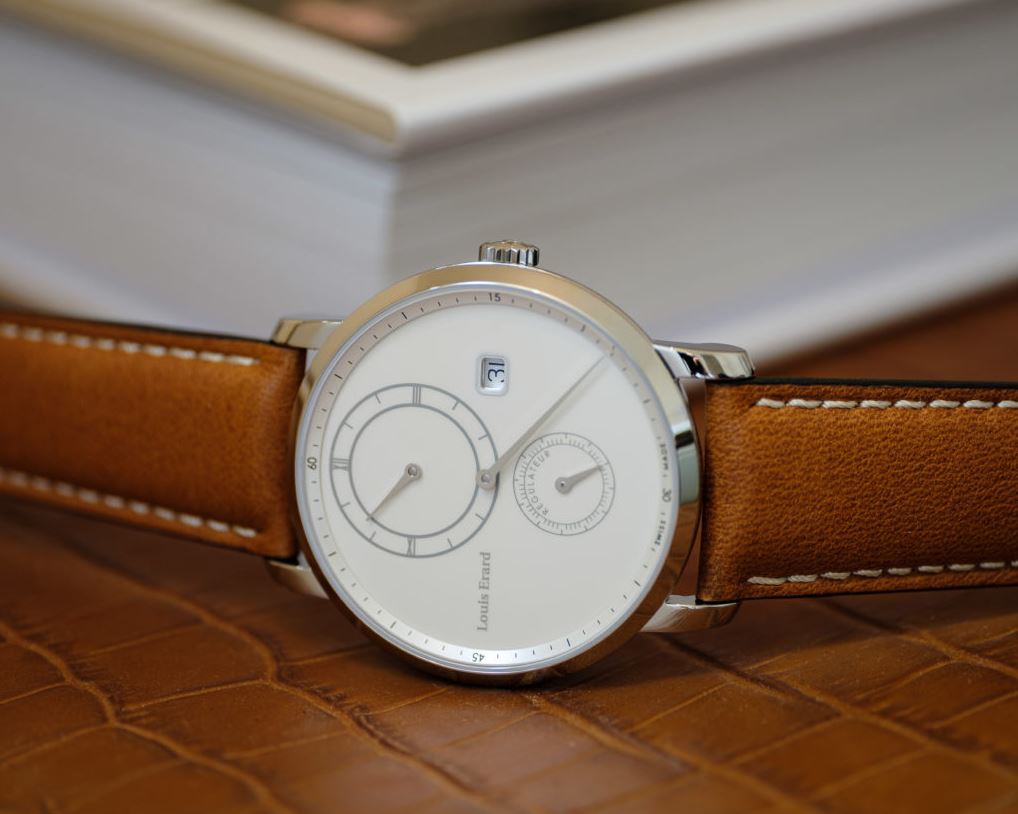 To further confound, the watches feature an oversized case that is seemingly unique to the Eric Giroud pieces, at 42mm diameter and 22mm lug-to-lug: the difference in size vs the standard 40mm Excellence Regulators is noticeable, and the extra dial space really drives home now comparatively empty the dial layout is. Whether this was an active decision, or something to do with the watch’s modified Sellita SW200 movement being larger than the time-only ETA 7001s previously favoured by Louis Erard, it’s certainly an uneasy modification. The watch fit comfortably on my 16cm wrist, but it *looked* big. Whilst in the age of Daniel Wellington the “dish on yer wrist” look is pretty normalised, it’s still not exactly my cup of tea, and I felt as though it clashed with the clear-headed minimalism of the design.

We should probably talk about that date window, huh. This is, by far, the most “marmite” aspect of the Eric Giroud Excellence Regulators. The placement is…interesting, and I’d be interested to know exactly how much the Dubois Depraz 14072 modules that Louis Erard use to achieve the regulator dial factor into this. A cursory look at Junkers’ regulator pieces– also 42mm and the only other watches I can find that use the same Dubois Depraz components to the same effect- shows a similarly “cross-eyed” result. Whatever the specific cause, movement and case size combine in a way that is…just a bit off, or at least when viewed in abstract.

This is the thing, though: in the metal, the Eric Giroud Excellence Regulators work, they work real good. As mentioned above, they feel undeniably oversized, which I don’t particularly vibe with, but their other proportional idiosyncrasies simply didn’t bother me at all when I was actually wearing them. Indeed, the “top-heavy” dial layout, when viewed upside down on wrist as an observer, looks extremely easy on the eyes in an intangible way. Remember when I was talking about interior design? That’s the vibe. A lot of the appeal of the dial is rather intangible, almost as if it was proportioned entirely by eye, as improvisational sketches, and at some point Giroud just went “yeah, that’s it”. This isn’t what we’re used to seeing in a lot of watch designs, and I’d argue it’s refreshing and expressive. That, and subtly intuitive despite its quirks: you could argue it’s only as odd and idiosyncratic as you or I, really. The only thing that really didn’t work for me, in practice, was the questionable choice of rounded-off lugs that conveyed a sense of classicism totally at odds with the reserved and sleek feeling of the rest of the design. These appear to be the same lugs used on standard Excellence Regulators, which makes perfect sense: however, unless there have been 42mm variants in the past that are now out of production, the case for the Giroud pieces is presumably bespoke, and therefore so too are the lugs. It seemed like a very odd choice to me, and shorter, more angular lugs would definitely have flowed more with the overall form. 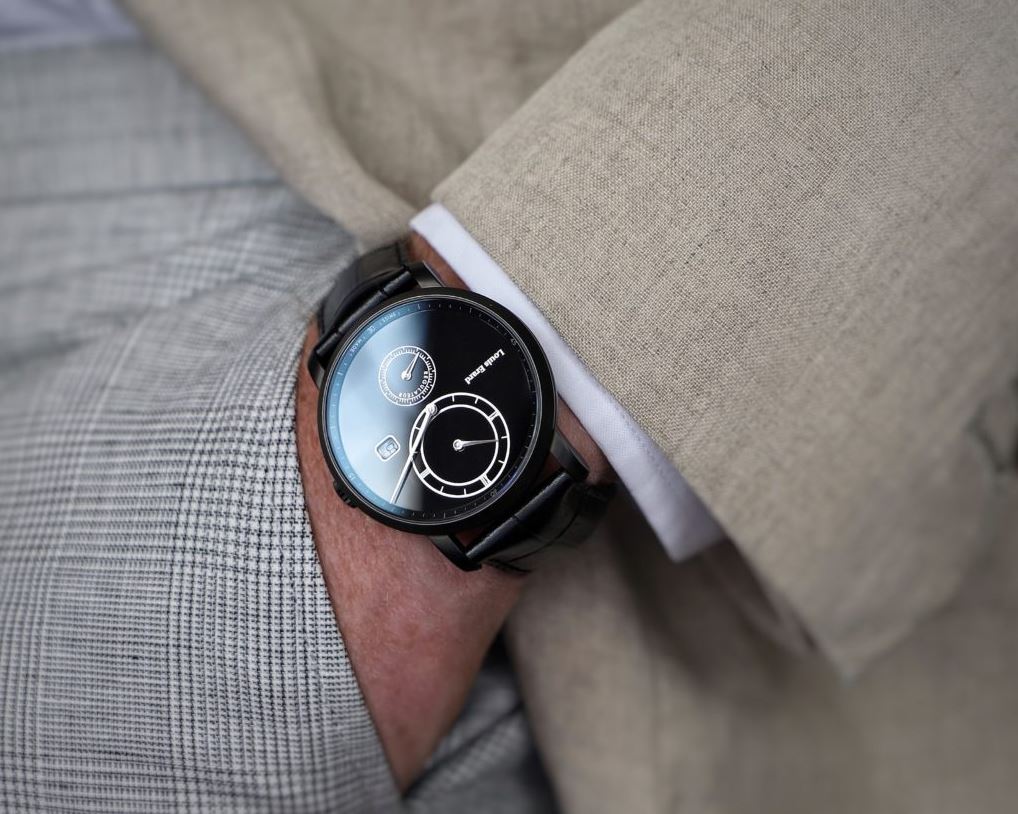 Having the opportunity to live with all three colour variants of the collection was a real treat. Whilst I was initially drawn to the creamy serenity of the white dial, I felt compelled to try out the blue variant when I found myself going out for lunch for the first time since lockdown began (which was pretty weird) – I’m not usually one for blue dials, but I was blown away by its versatility and convincing projection of low-key ostentatiousness. It has a markedly different feel to that of the white dial, one that is sportier and arguably less uptight, and this level of differentiation between colourways is an invaluable feature for any collection. Indeed, of the three I would say that the only misfire is the black variant- it’s aggressive and youthful, in a manner that is at odds with the rest of the design. It’s just a bit much. The reasoning behind the blacked-out look, from the dial to the case and strap, seems to be an effort to differentiate the black dial’s appearance from that of the deep blue, which makes a lot of sense in theory, although I’d be tempted to suggest that implementing gold tones would have made for a superior alternative. There is precedent for this in the Louis Erard catalogue, specifically some nice rose gold pieces in the Héritage collection, and I think it would have been a convincing differentiator (albeit one that took the vibe of the design in a drastically different direction- or, perhaps, in too similar a direction to the aforementioned modern Grande Secondes?).

In conclusion, the Louis Erard x Eric Giroud collection is a disruptive and surprising series of watches that confused and delighted me in equal measure. Questionable but refreshing design decisions collide, with the results ultimately delivering far more fun and versatility than photographs accurately convey. Less “bank executive at dinner” and more “architect at brunch”, the design builds on Louis Erard’s flagship release and discovers an untouched niche to direct it towards- which, I’d imagine, was Giroud’s mission all along.