Last week was very disappointing.  I was supposed to be meeting up with David (@thewatchbloke), Vish (@mrwatch85) and Yeo (@lifethroughmyphonelens) for a trip to Pragnells in Stratford-upon-Avon to check out the latest Rolex releases.  Unfortunately the new lockdown rules came in to force one day before our planned get together and that meant that Yeo and I were not allowed to socialise with anyone outside of our households or make unnecessary journeys.  Such a shame.  David and Vish generously shared their photos with us.  It looked like a great event.  Maybe next year things will be different and we will be able to check out the new releases in person. 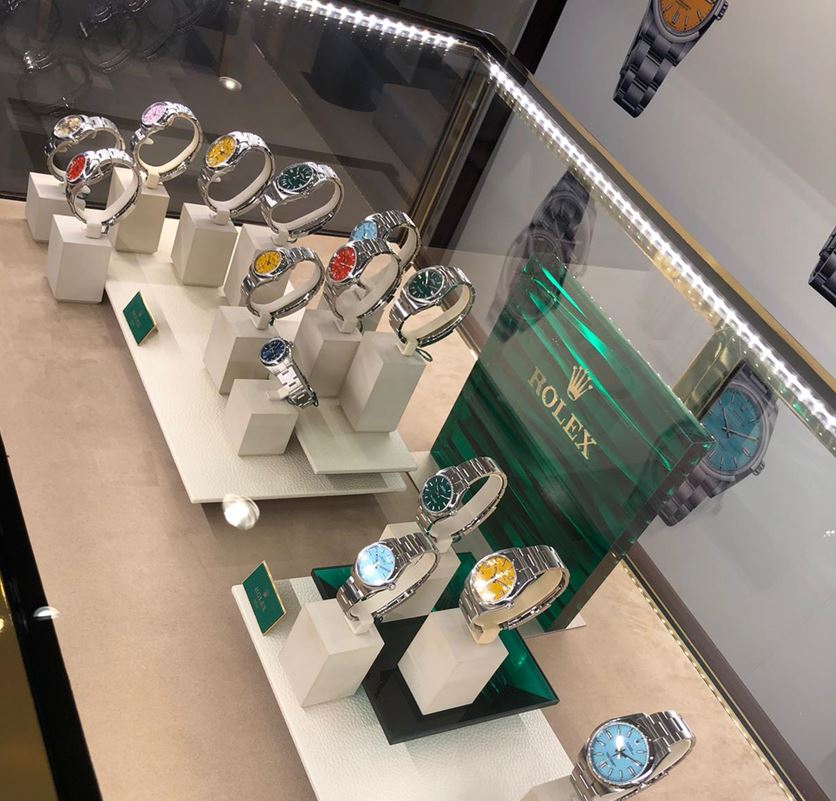 There was a real oddball mix of releases and watch news last week.  So here we go, in no particular order.

Formex (the Swiss watch brand, not the Nordic interior design conference) released the REEF automatic.  It is a COSC certified, 300m, 42mm dive watch.  The stainless steel watch features a top grade Sellita SW300 movement, a unidirectional ceramic bezel, super-luminova and a solid three link bracelet with a patented fine-adjustment system.  On the website you can choose between the bracelet and a rubber strap, there are also four different bezel options and four different dials that you can pick.  It is not a fully customisable watch by any stretch of the imagination but it is good to see that brands are starting to embrace the online shopping experience and give customers the option of creating something that reflects their own personality.  I suspect that this is something we will see more of post pandemic as people make more considered purchases.  The watch is available for pre-order at £1520 on the rubber strap and £1620 on the bracelet. 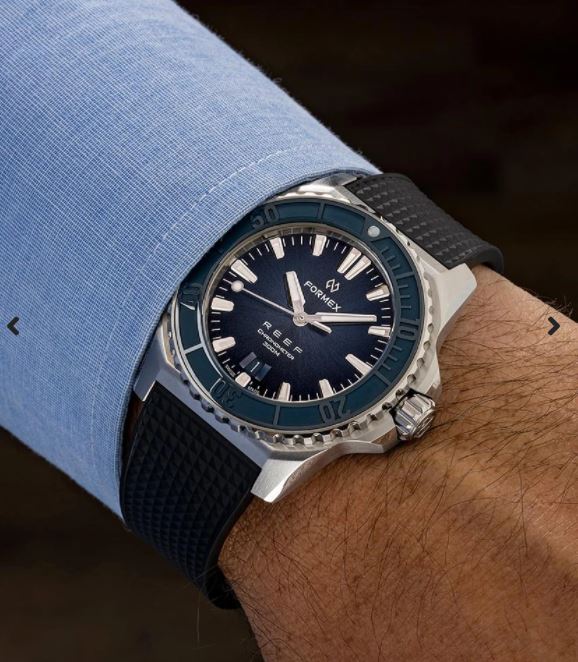 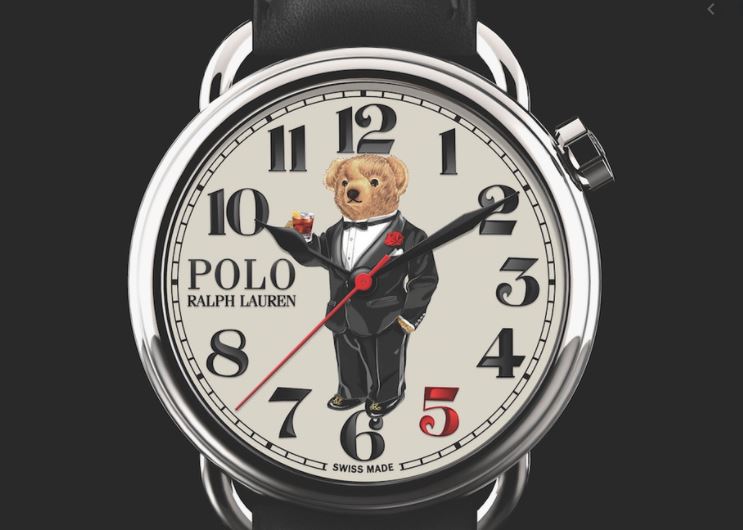 It’s no secret that Wei Koh is a fan of a Negroni cocktail. I have been known to enjoy a Negroni or two myself. In its most basic form of equal parts gin, vermouth and Campari, stirred with ice and garnished with orange it is a quick and simple cocktail to make, and that’s a big part of the appeal. It is quite a bitter cocktail which can put some people off but there are some great variations to the cocktail that can temper that bitterness. I’m quite a fan of a Rum Negroni where you substitute the gin for rum. You can find a video on how to make one here. I’ll be honest, I did not know that the Ralph Lauren Polo Bear was a thing.  I’m familiar with Paddington Bear, Rupert Bear and the Oris Bear, but Polo Bear was not on my radar.  Apparently the Polo Bear has been used on a number of limited edition products in the past including three watches in 2019, and generally they have sold out quickly.  This 200 piece Rake X Ralph Lauren limited edition features the bear in a tuxedo with a Negroni in hand (or should it be paw?).  The 5 on the dial is in red because it is always 5 o’clock somewhere.  It is a playful, fun watch with a 42mm case, RL200 movement and 5bar water resistance.  It comes with two straps black calf and red grosgain for £1680.  I don’t think it is an everyday watch, but it would make a nice lighthearted addition to someone’s collection. 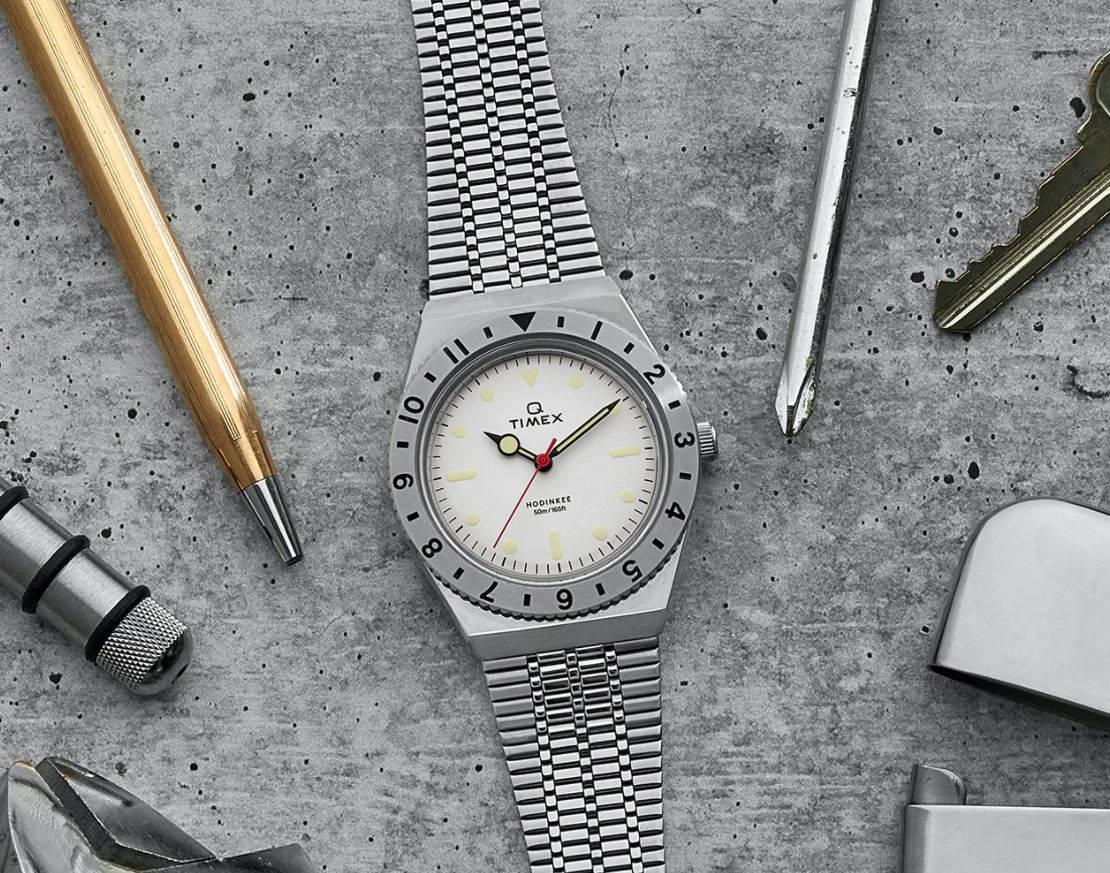 The Q Timex has been a very popular watch since its reissue in May 2019, repeatedly selling out as new batches have been released.  To find out more about the spec of the original watch you can check out Rikki’s article here.  The Hodinkee version keeps the tried and tested 38mm case, the quartz movement and the bracelet.  Gone is the “quartz” on the white dial, it has been replaced with Hodinkee and a meters first depth rating (50m/165ft).  The watch also features a steel bi-directional 12 hour bezel, this gives the watch a very different look from the regular production models with their colourful bezels.  Having listened to the Hodinkee podcast a few times I know that James Stacey is a fan of a steel bezel and the way that it develops patina that tells a story with every knock and scratch.  A steel bezel certainly gives a watch a functional, industrial look and the Q Timex Hodinkee Limited Edition is no exception to this rule.  It might not be in the same league as a Tudor Black Bay with a steel bezel or a Rolex Explorer II but for $189 you get a similar vibe for a fraction of the price.  Well, in theory you could, they have already sold out. 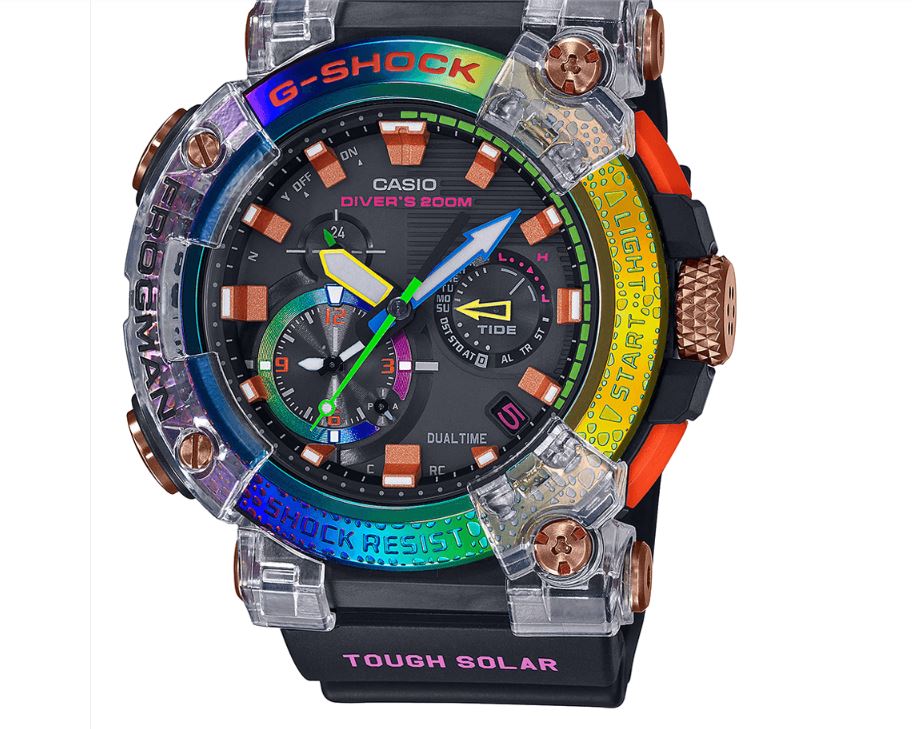 Three garish monstrosities ranging in price from £259 – £899.  They are far from everyday pieces, unless you happen to be a rave DJ.  To be fair there is a market for rainbow watches, just look at the Rainbow Daytona and the Hublot Rainbow collect.  These watches take that concept and push it to its iridescent oil slick rainbow conclusion.  They are certainly more affordable than their gemset counterparts, I’m just struggling to see when and where anyone would wear them.  Maybe that makes them the perfect lockdown watch.  Check out the links below and let me know what you think about these in the comments.

Oris debuted a new movement this week.  It’s an automatic time and date movement with an impressive 120 hour reserve.  A five day reserve on an automatic movement is certainly impressive and it will no doubt appeal to watch collectors who like to have a number of watches in rotation.  The movement is resistant to magnetism, it has a 10 year warranty and a recommended 10 year service interval.  On paper it is an impressive piece of kit.  It will be interesting to see which watches this movement will appear in and how much they will cost.  I think it would suit a tough weekend watch that you could switch out for a smartwatch or dress watch during the week.  I am sure we won’t have to wait too long to find out.

Circula released the Aquasport this week. 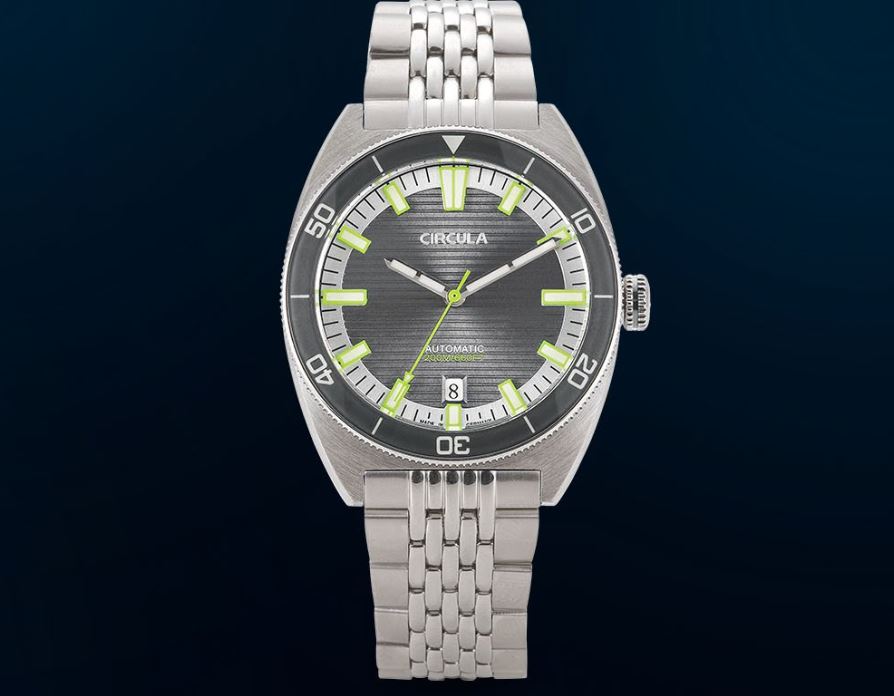 Circula is quite an interesting microbrand.  The company was started in 1955 by Heinz Huber in Pforzheim, Germany.  His grandson revived the company in 2016 and relaunched watch production using a kickstarter campaign.  He draws inspiration from the watches and clocks produced in the past by the company.  The company uses a mix of movements, everything from swiss quartz and Miyota automatic, to new old stock 1970 P.U.W. manual wound movements.  The Aquasport is reminiscent of their vintage dive watches but in a modern package.  The watch is water-resistant to 200m, the case is 39mm in diameter and 46mm lug-to-lug.  It features sapphire crystal, a 120 click unidirectional bezel and super-luminova.  Everything you are looking for in a dive watch.  The watch is available in four different retro colourways and it comes on a rubber strap, mesh bracelet or steel bracelet.  You also have the choice of an STP 1- 11 movement or an ETA 2824.  Prices range from 486.42€ – 681.37€ depending on which option you go for. 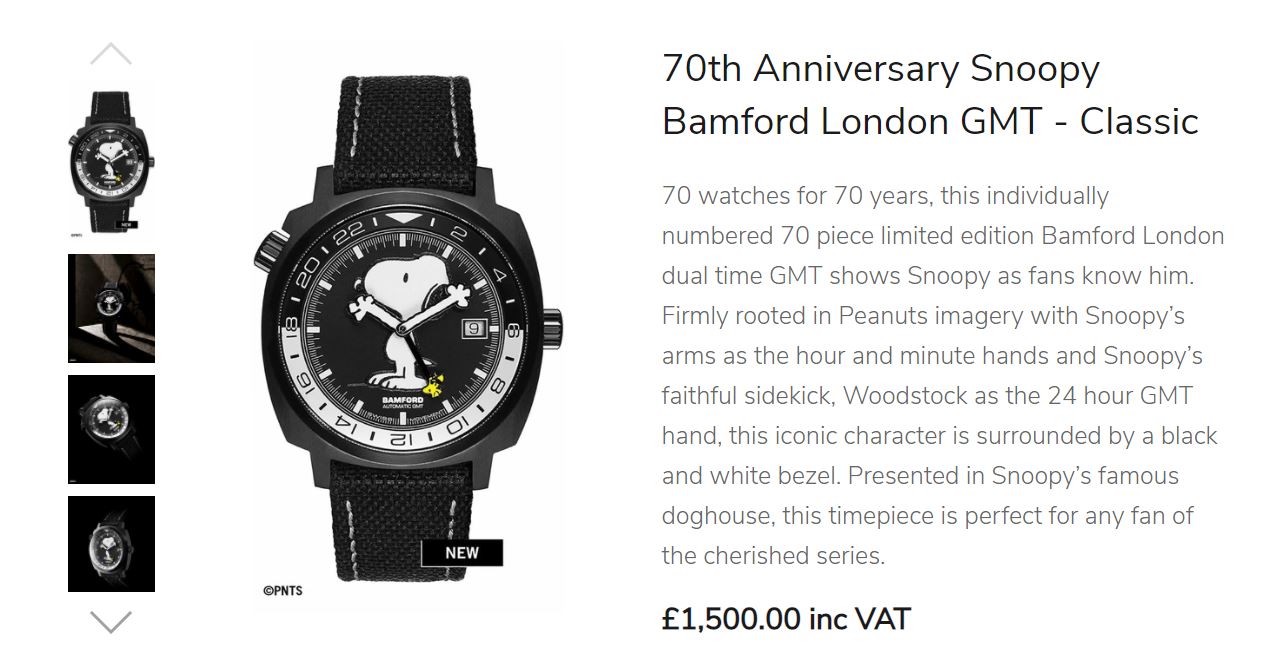 They are very similar to the Popeye limited edition watches that were released last year.  This time Snoopy’s arms are the hour and minute hands and woodstock is the 24 hour GMT hand.  The £1500 watch is powered by a Sellita SW330-1 movement.  The 40mm case is water resistant to 100m and features sapphire crystal with an anti-glare coating.  The watch also has an internal 24 hour bezel.  If you have listened to the Scottish Watches interview with George Bamford (available here) you will know that he favours an internal bezel because he kept finding that he would knock an external bezel when traveling with a GMT watch and that he would end up phoning people at the wrong time.  That doesn’t explain why the Bamford Mayfair has a 12 hour external bezel, but I digress.  I think this is another example of a fun watch featuring a cartoon character.  It is not the first watch to feature snoopy and co, and I am sure that it won’t be the last.  I also don’t think it will be the last watch to feature a red dog house box either, the packaging looks almost identical to Undone’s 2018 Snoopy release. 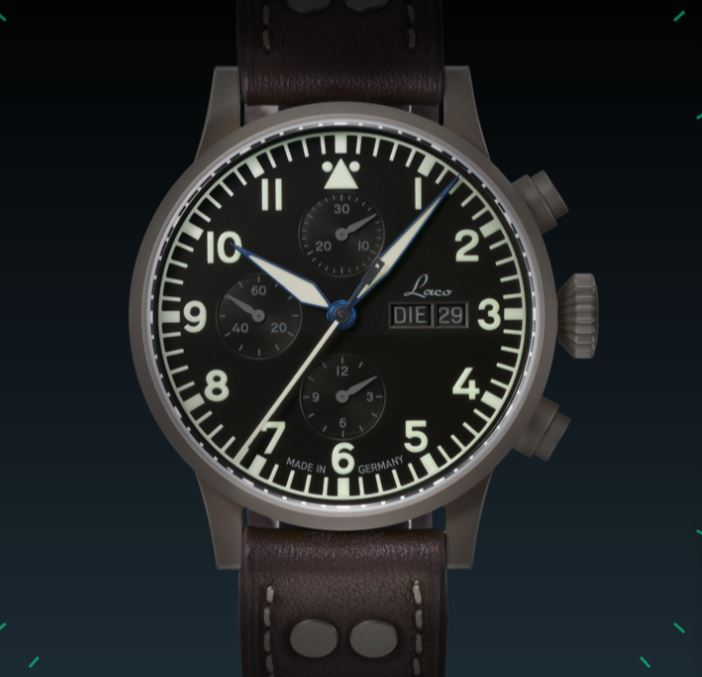 The sand blasted matte titanium 42.3mm case houses an ETA Valjoux 7750 movement and is water resistant to 100m.  The hands and numerals feature a healthy dose of lume, making this a highly legible pilots watch.  The chronograph subdials and day-date are a dark grey and they almost disappear into the black dial, which I really like.  It is a clever take on legibility, I often feel like a chronograph makes a dial busy and distracting, that is not the case here, this is first and foremost a flieger.  It is supplied on a riveted dark brown leather strap with contrasting white stitching, a classic accompaniment to this type of watch. It seems like a lot of watch for 1,990€.

Astor and Banks released the Fortitude this week which is their take on a traditional officers watch. 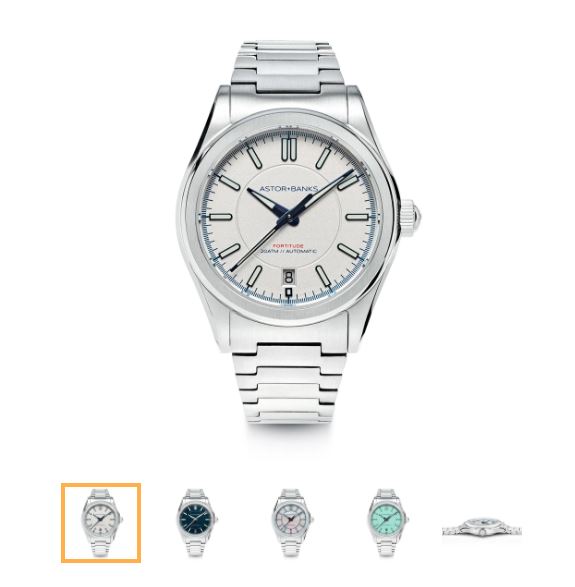 There are four different dial options to choose from – silver, navy blue, mother-of-pearl and mint green.  There is also a navy blue version with gilt hands and print available from BLVDier (no, I’ve never heard of BLVDier either, something to do with clothes).  The 38.5mm case houses a Miyota M9015 time and date movement.  The date is at 6 o’clock which gives the dial layout good symmetry.  Aston and Banks have added soft iron plates to the movement which make it highly anti-magnetic.  The hands and indices feature super-luminova and the watch is water resistant to 300m.  It comes on a stainless steel bracelet and it is also supplied with a suede leather strap with quick release pins.  Astor and Banks have set out to make an everyday watch that will work with a suit, with jeans or by the pool.  I think they have fulfilled their brief, I can see this being a good day-to-day watch that you can strap to your wrist while you get on with whatever life throws at you.  It is priced at $650 -$695.

So, there you have it, some of the highlights from the last week in watches.  A quick canter through the new releases  and news.  As always I would love to know your thoughts in the comments below. 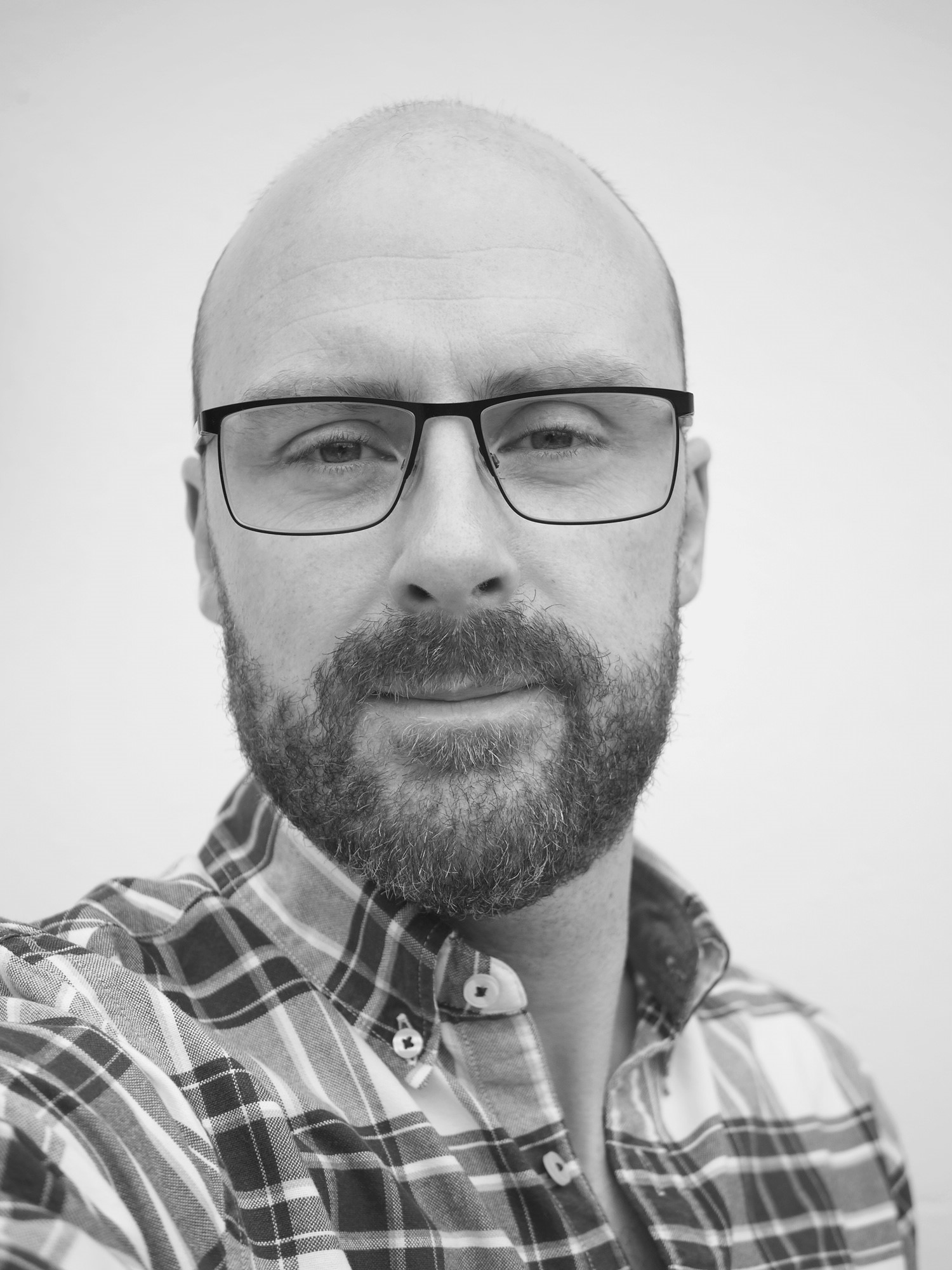