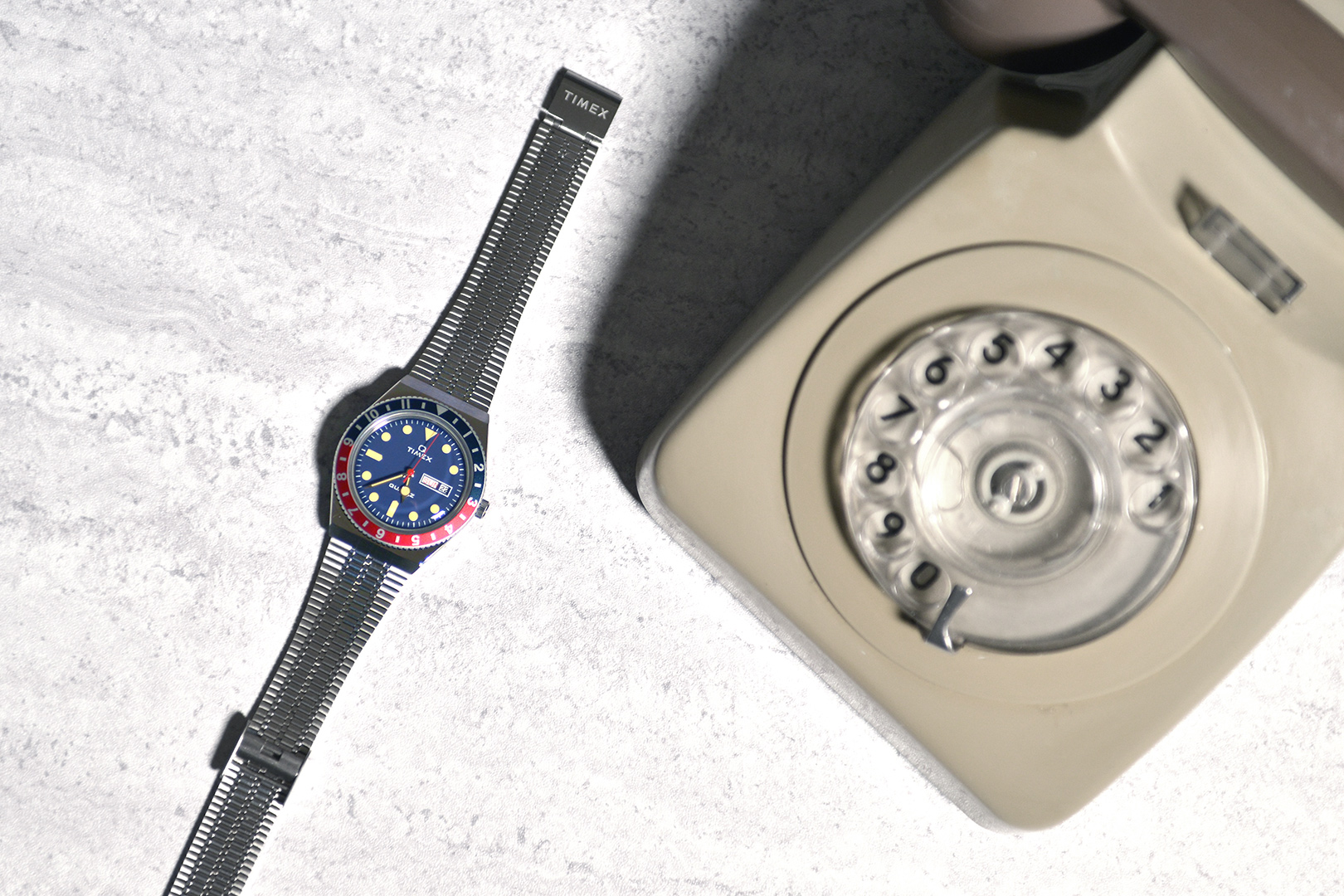 We’re living in a vintage revival. It’s an era where everywhere you turn there is a call back to a not so distant time, be it a 90s TAG, an 80s Tudor or a 70s Bulova. While the mechanical kings have had this nostalgia trip to themselves for a good number of years now it’s the quartz crew that are now following suit and appearing with not only analogue editions but in the case of Bulova, even LED releases.

When I saw the Q Timex (not Timex Q as others and myself kinda thought) information drop earlier this May, I like many others saw a look that appealed straight away. For me it was the pepsi colours in a non Rolex style. I never cared much for any of the homage pieces in the mechanical realm, I’ve already got a GMT so a Tudor with a red and blue bezel didn’t appeal and neither did the Seiko SKX007. The Q ticked the colour check box and the rest of the watch finished with all bases covered. Dial colour, hands style, case shape and bracelet. It oozes late 70s suave styling, moving away from the bolder autos with their pillow and cushion cases and on to the slimmer quartz numbers that transitioned across into the 80s. 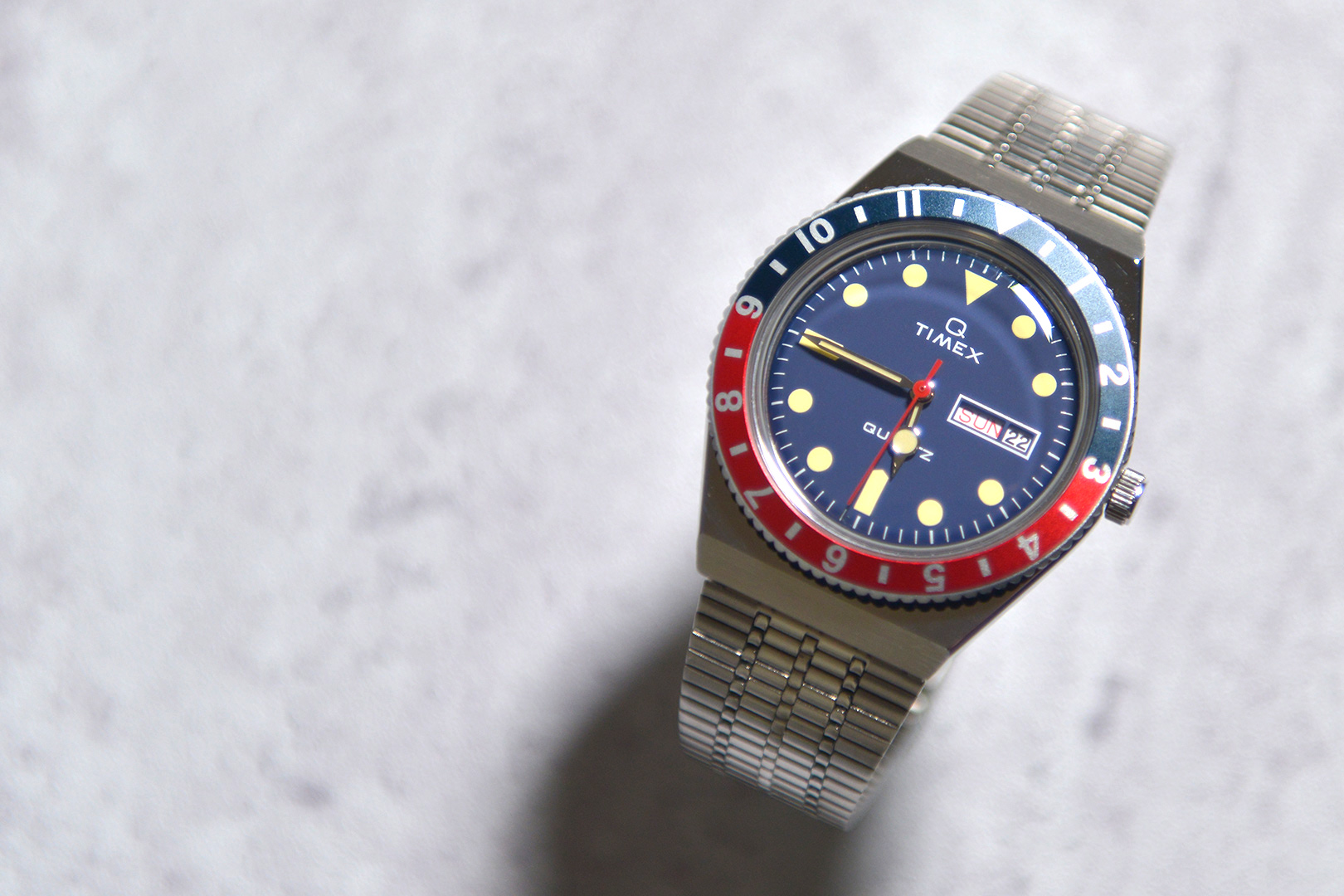 So what happened in May? Well like everything else this year, and as a nod to Scottish readers it Popped in, Souled Out. I’m not sure if Timex vastly underestimated the thirst for this style of watch but no sooner had retailers got stock than it was immediately out of stock – everywhere. It took all the way through to this week (mid September 2019) for more merchandise to become available and as with the Snoopy Apollo 50th anniversary watches a couple of months ago, as soon as this batch turned up and emails were sent out from Timex HQ – they were gone again, but not before quick trigger fingered Instagram and Facebook group users had snagged some for themselves.

I was one of the lucky few this time around, I’d signed up to the Timex UK website and asked for an email as soon as news was available and I was preparing to record a podcast while on Instagram live when I got on to the website and placed my order. Within minutes of the IG live kicking off and still with the order page on my now broadcast stream, people spotted what I’d done and went off to buy their own. I’m not saying I caused them to sell out but being online with a couple of hundred people while Timex ran out saw comments of delight turn to sorrow as the taps were turned off mid broadcast. Not to worry, news from Timex HQ is that you only have to wait until October for the third batch to become available – get signed up to that mailing list and get ready for action!

“So enough preamble, tell us about the watch Rikki!” – Ok, ok, I’m getting there!

Firstly this is my first Timex. Even as a kid I don’t ever remember owning one. Not an LCD digital, not an analogue quartz. I nearly bought an Ironman but instead opted for a Casio number from Argos. So this is my first Timex rodeo. The ordering process was easy, they kept me up to date on shipping and a nice delivery driver handed over my package when the email said he would. 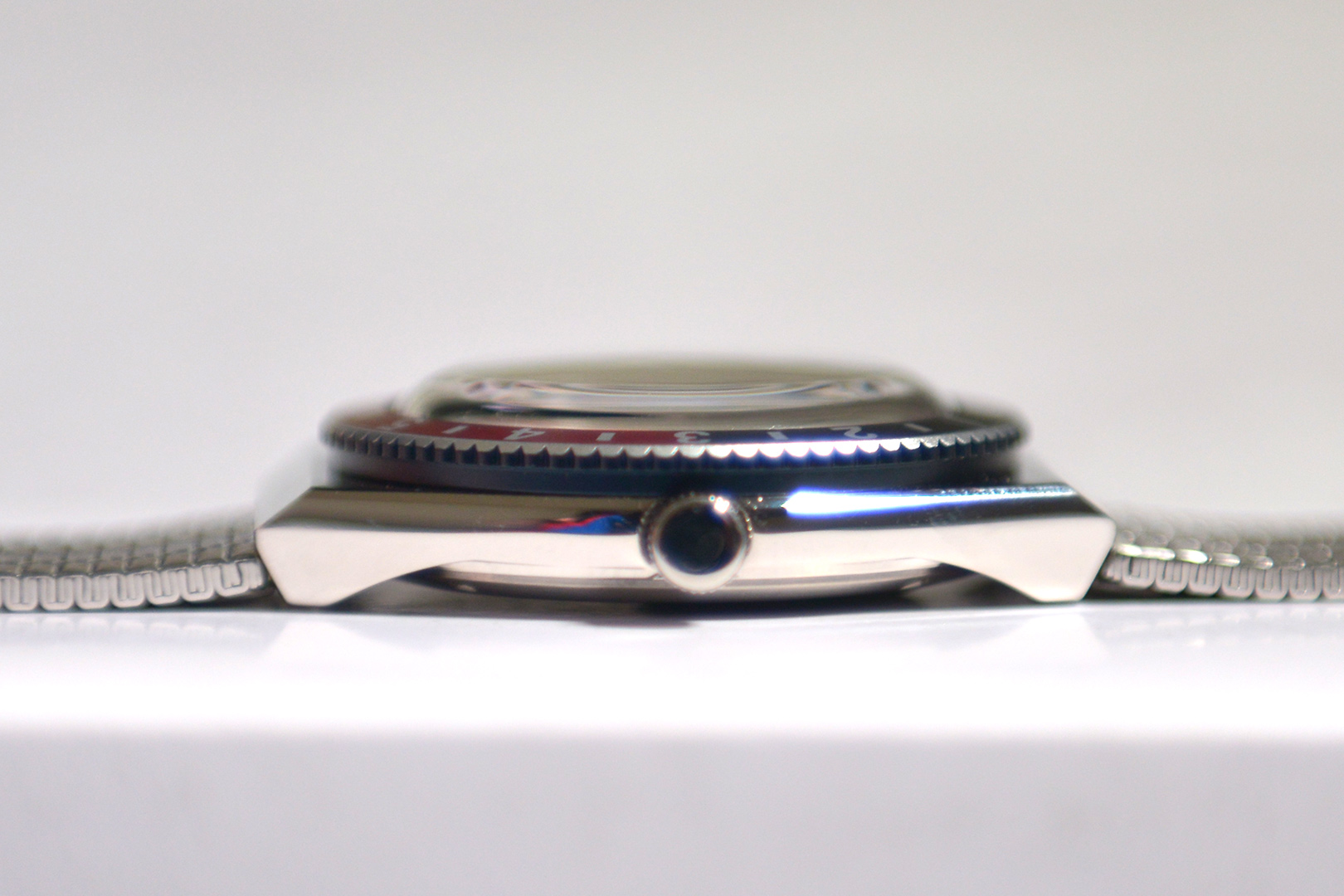 Inside the APC mailing bag was a white sleeved box in which I found another box. Boxception. Inside this one was the watch and tiny user manual. Nothing else included, nothing else needed. A fair degree of protection is also included to protect the easily scuffed acrylic crystal and the kinda shiny watch head and caseback. With all that removed and with the crown stem brace put away and the time set it was time to try the beast on. Well after having to rotate the hands a hundred million times to set the day – there’s a quickset for the date but you could be moving through 168 hour rotations to get the right date up. 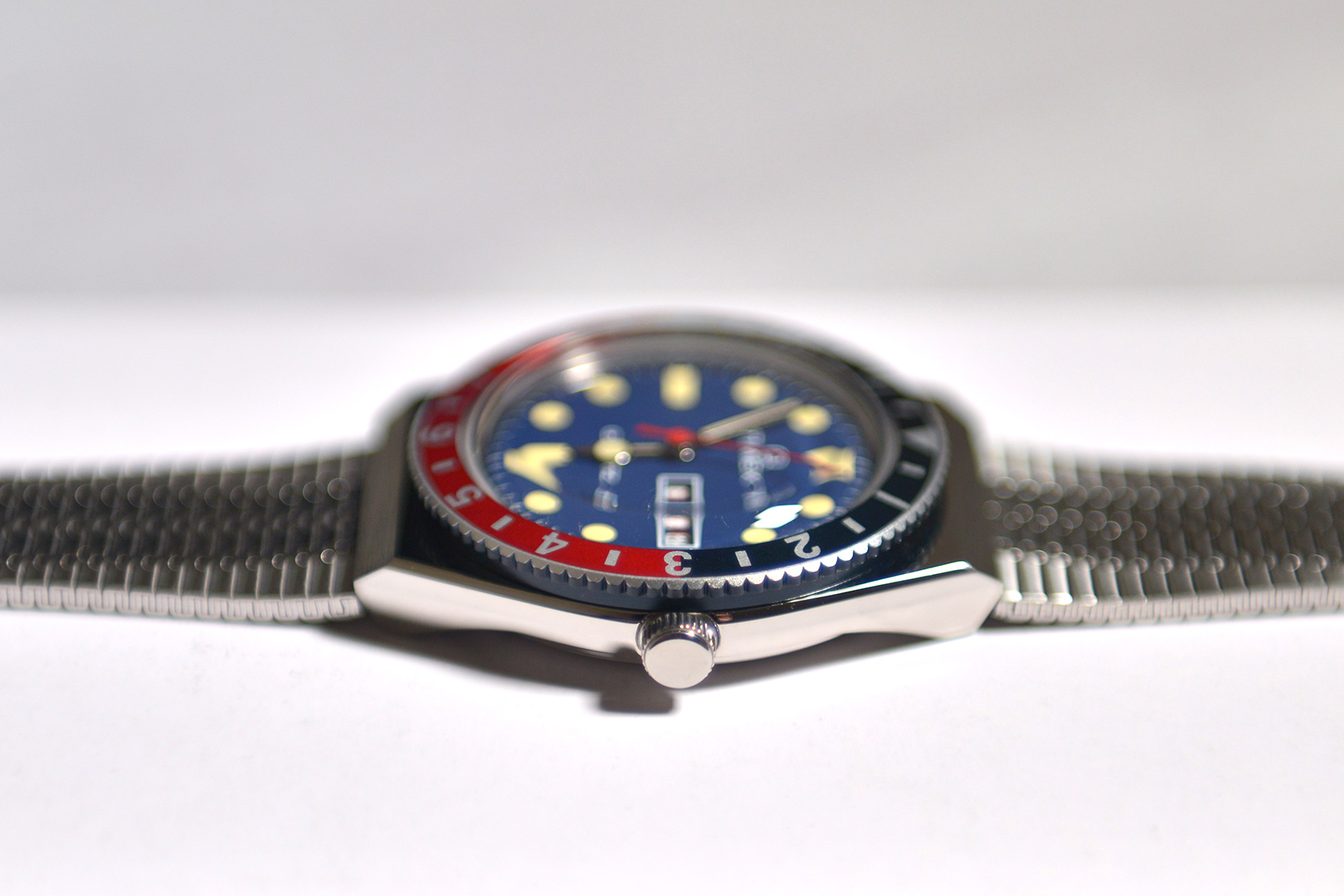 With all that done it was ready for wear, or so I thought. It was never just going to drop on to the wrist first time and fit like a glove. But the friction clasp turned out to be a complete nightmare to adjust. With a lot of brute force and ignorance I finally managed to prise it open but the retaining bar in front of the clasp took a beating and bent. After some back and forth it was set to an acceptable position and coerced back into the locking position ready for wear. Maybe the day and bracelet work was all part of that 70s charm, who knows. But I’m glad I stuck with it because as soon as it was setup perfectly it put a smile on my face. 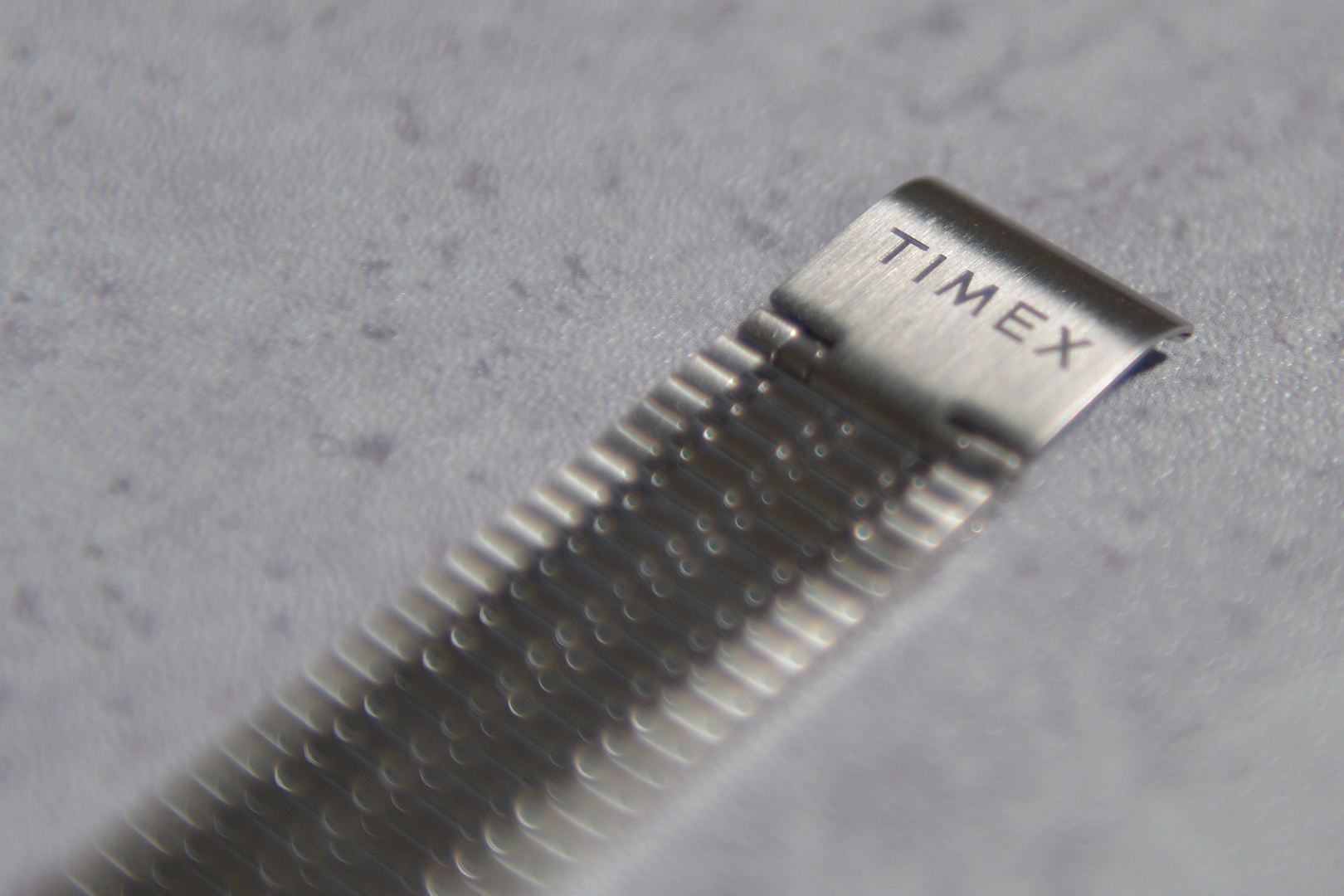 I’ve seen, handled and tried a lot of Pepsi coloured watches in my time. Vintage Rolex GMT Masters, Seiko SKXs, Tudor GMTs but this Oyster Quartz style case, vintage inspired bracelet plus blue and red bezel just works. In reality it’s a lot of money spending £159 on what is in effect a cheap quartz analogue watch with an £8 Seiko movement inside but that doesn’t matter if makes you grin ear to ear. 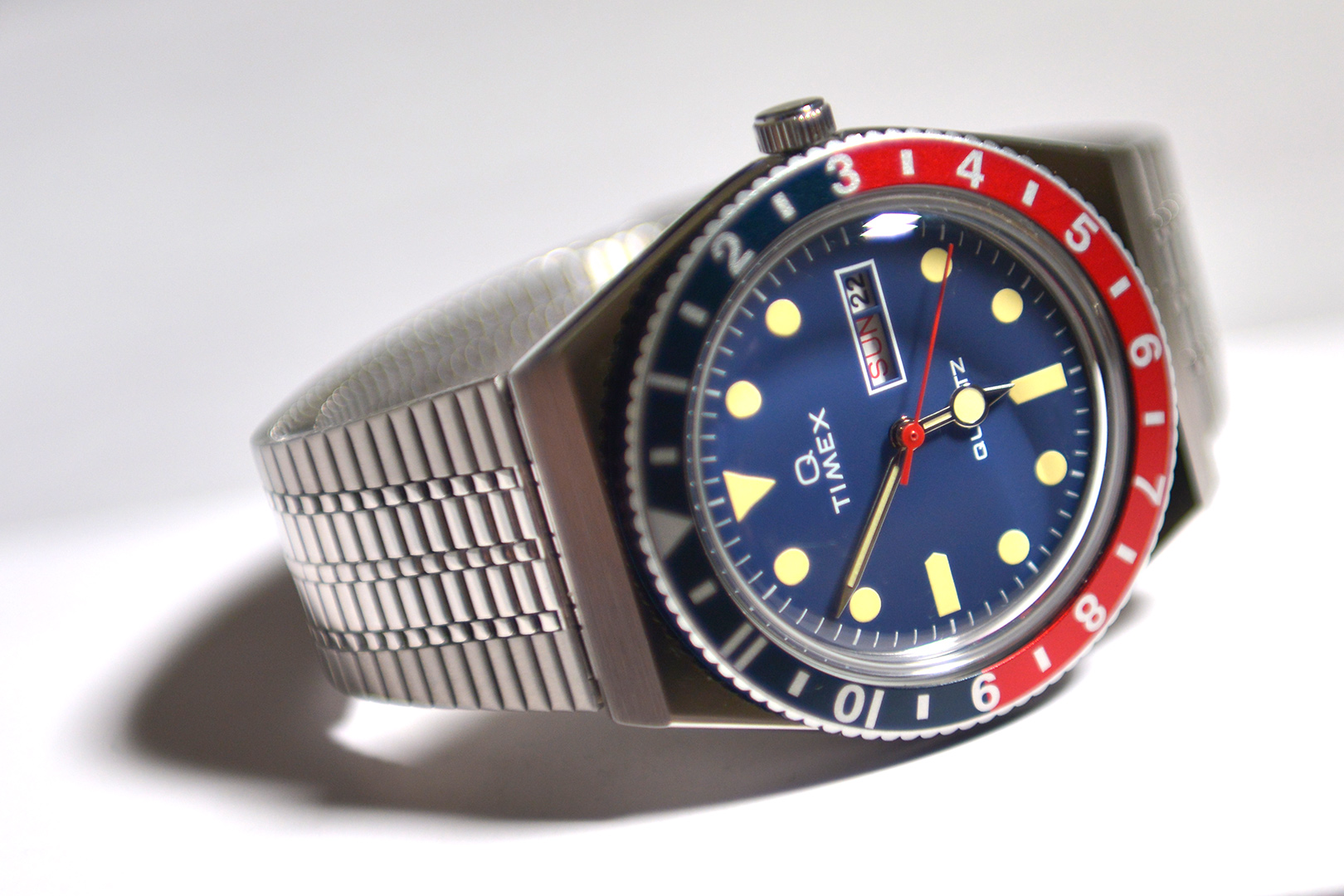 When I did the unboxing on a subsequent Instagram Live some commentators said it was all hype and I was being a sheep just buying what everyone else bought. That’s not the case. I almost bought the psychedelic Snoopy Apollo 11 anniversary edition … but didn’t. I’ve also not bought or attempted to buy a single Hodinkee special edition, or any other highly sought after piece in recent memory. The Casioak GA2100 getting popular was after I got mine so that doesn’t count either, sorry guys.

So here is the quick fire self test I run before buying and after buying, you ready?

And after a week of ownership my second set of questions…

With its Royal Oak shape it wears a little larger than the 38mm would indicate. The bracelet sits underneath the head and conforms nicely to the wrist. Though it is a hair puller so expect a bit of pain for your pleasure there. 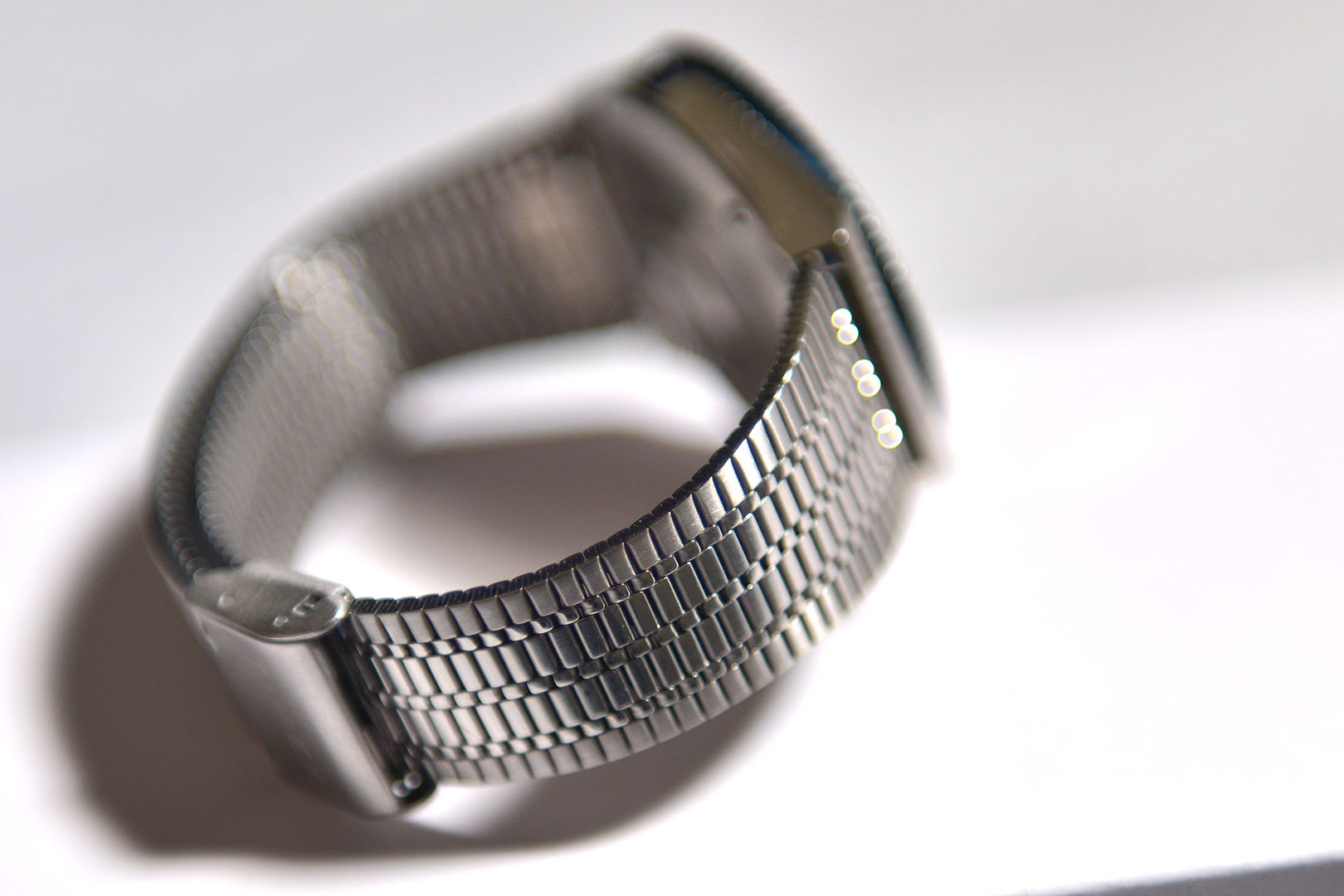 Slight horizontal brushing is present (again Royal Oakqeue) on the case frontage just above and below the bezel which look great, the bezel itself is bidirectional and of the friction variety not click stagger like most GMTs. Something that I’ve not seen mentioned elsewhere but that I instantly noticed is that from a side on view the bezel itself has a blue ring. Comparing this to ye olde vintage versions this is true to form, and pretty much the whole piece is identical to the 1979 original. The only discrepancies I could spot were the dial printing and angle of the date window. The crystal is acrylic so watch out for scuffing, but it does have that “of the time” domed shape. 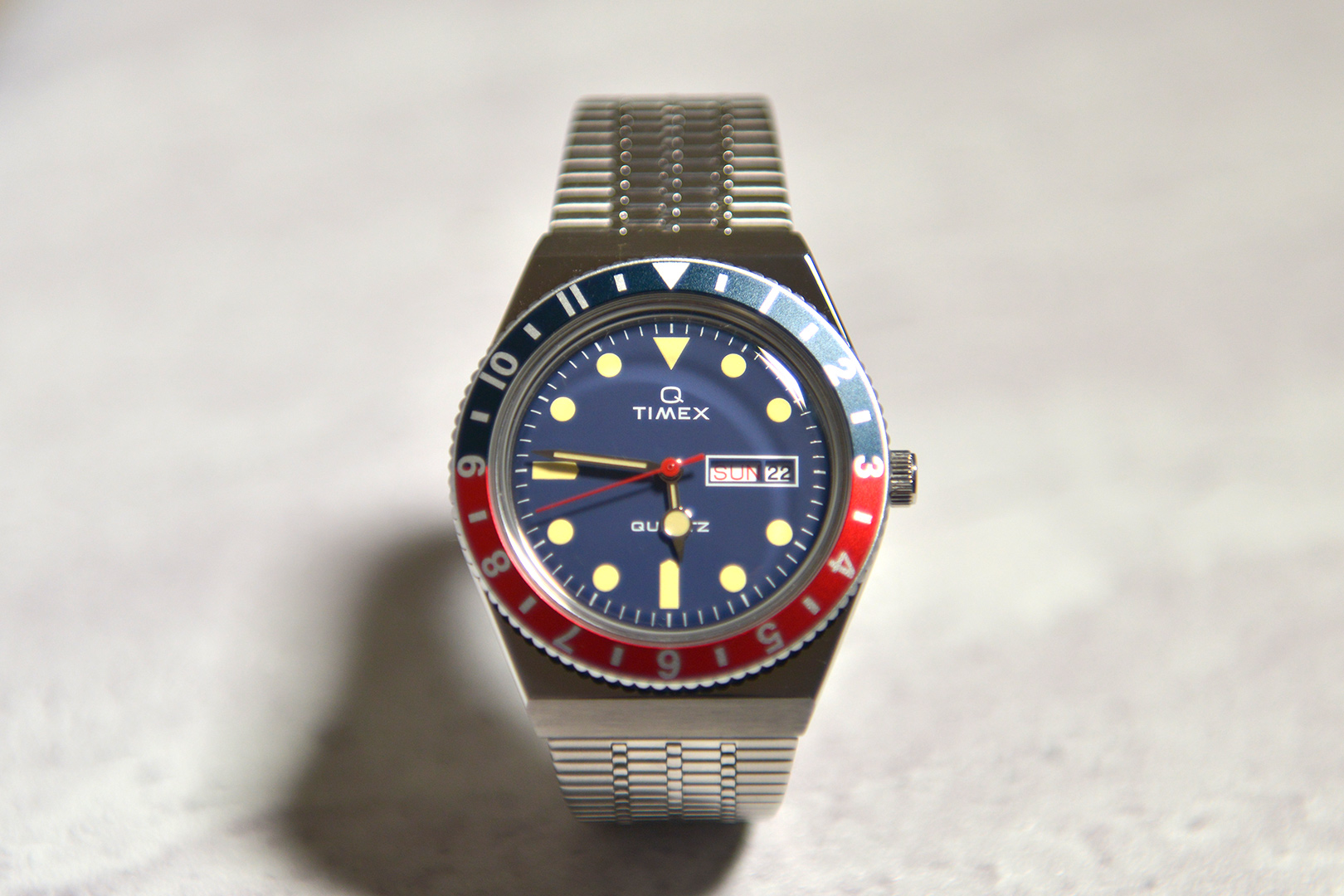 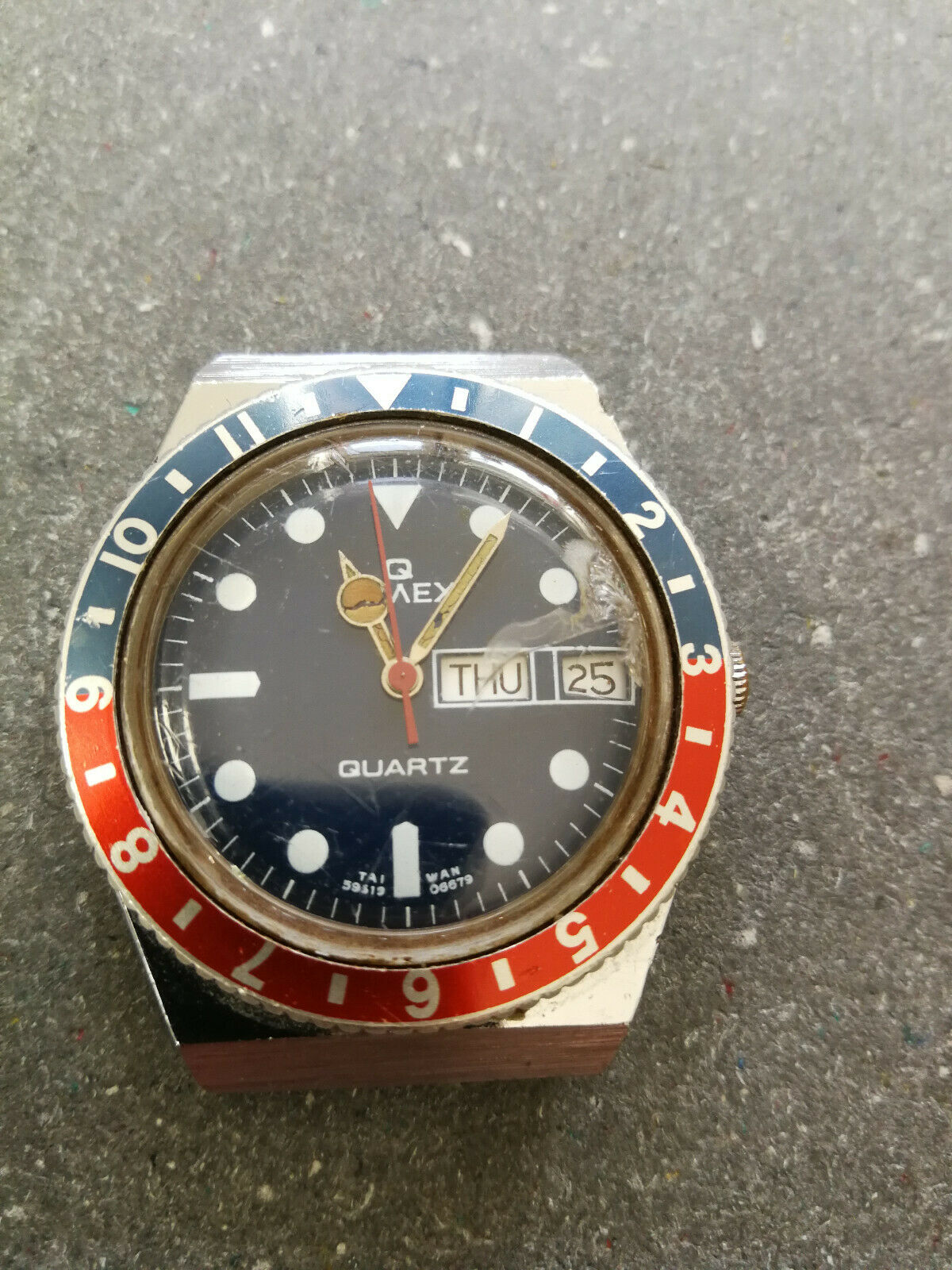 That £8 movement mentioned earlier doesn’t mean it’s necessarily bad. In fact over the past week it’s gained just 1 second. Not Grand Seiko 9F quartz levels of awesome but very good considering the price point. And unlike my box of Swatch quartz pieces, the Timex with it’s Seiko guts hardly makes a noise. In fact it’s almost silent on my glass topped bedside table. The hands also land perfectly on the minute markers too – bonus! 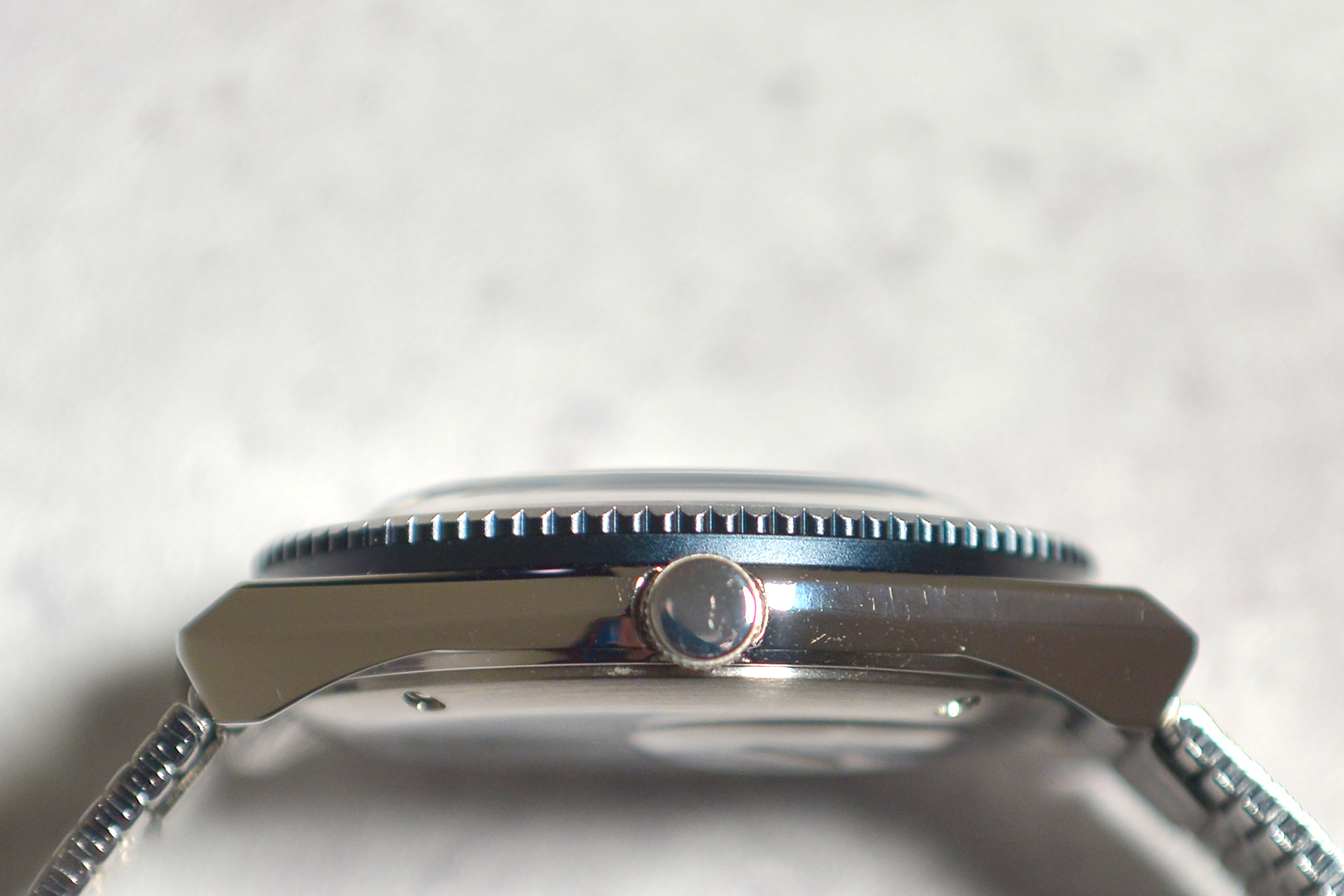 True to the era, replacing the battery is an easy task and the caseback doesn’t need removing, instead a Swatch like battery door is easy accessible for doing the swap out. The back of this Timex looks very similar to the rear of my actually vintage 1967 Bulova 214 Spaceview so it must have been the in thing back in the day. Even with the easy access hatch the little Timex still gives you 50m of water resistance so you can do most water related tasks without too much worry but swimming might not be the best idea. No screwdown crowns here to give you peace of mind. 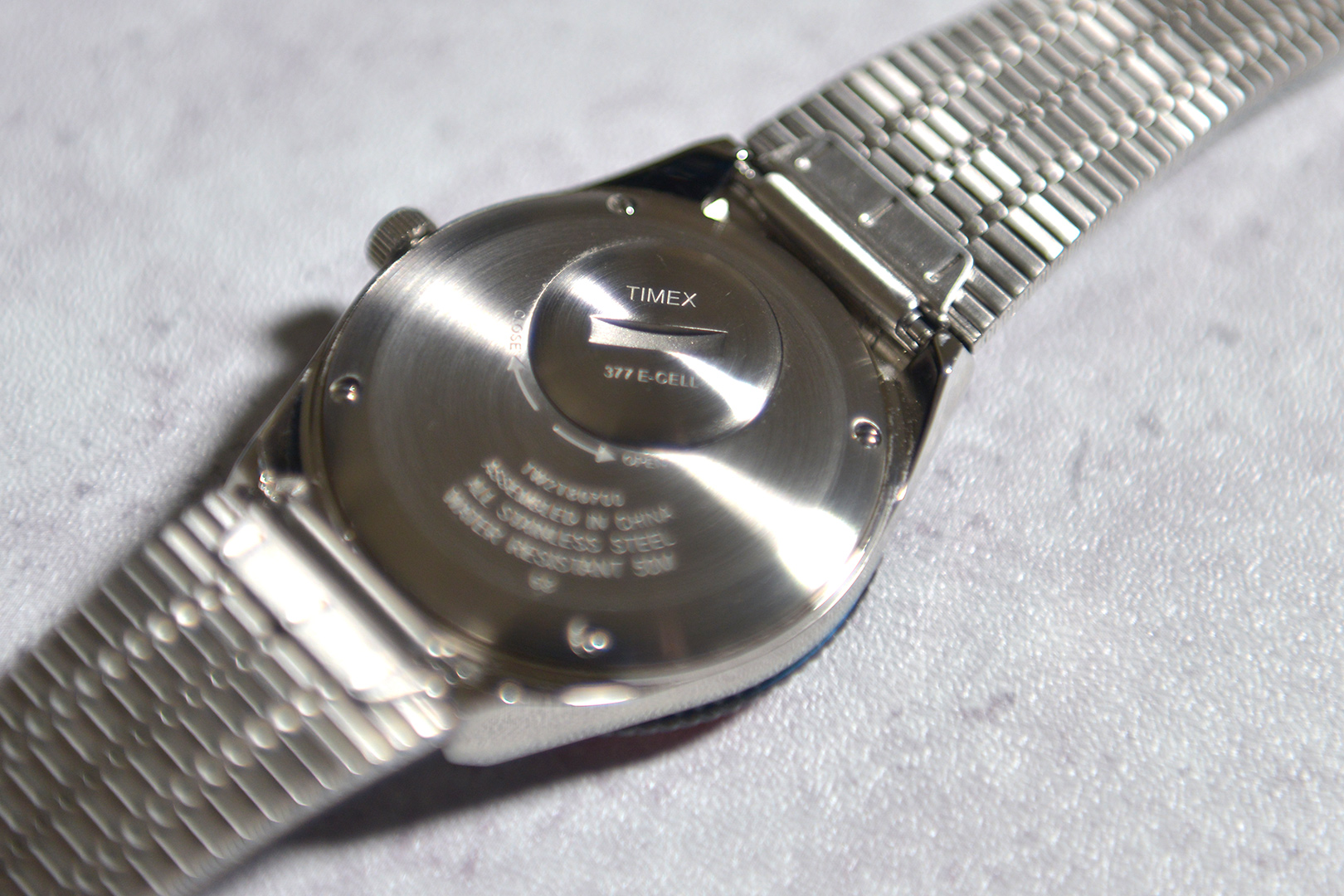 On the livestream I was asked what the lume was like, and I had no idea. So a quick visit to my watch toolbox and I had my trusty UV torch, charged up the painted lume plots and to my surprise it lit up well. In day to day use it holds its own too. 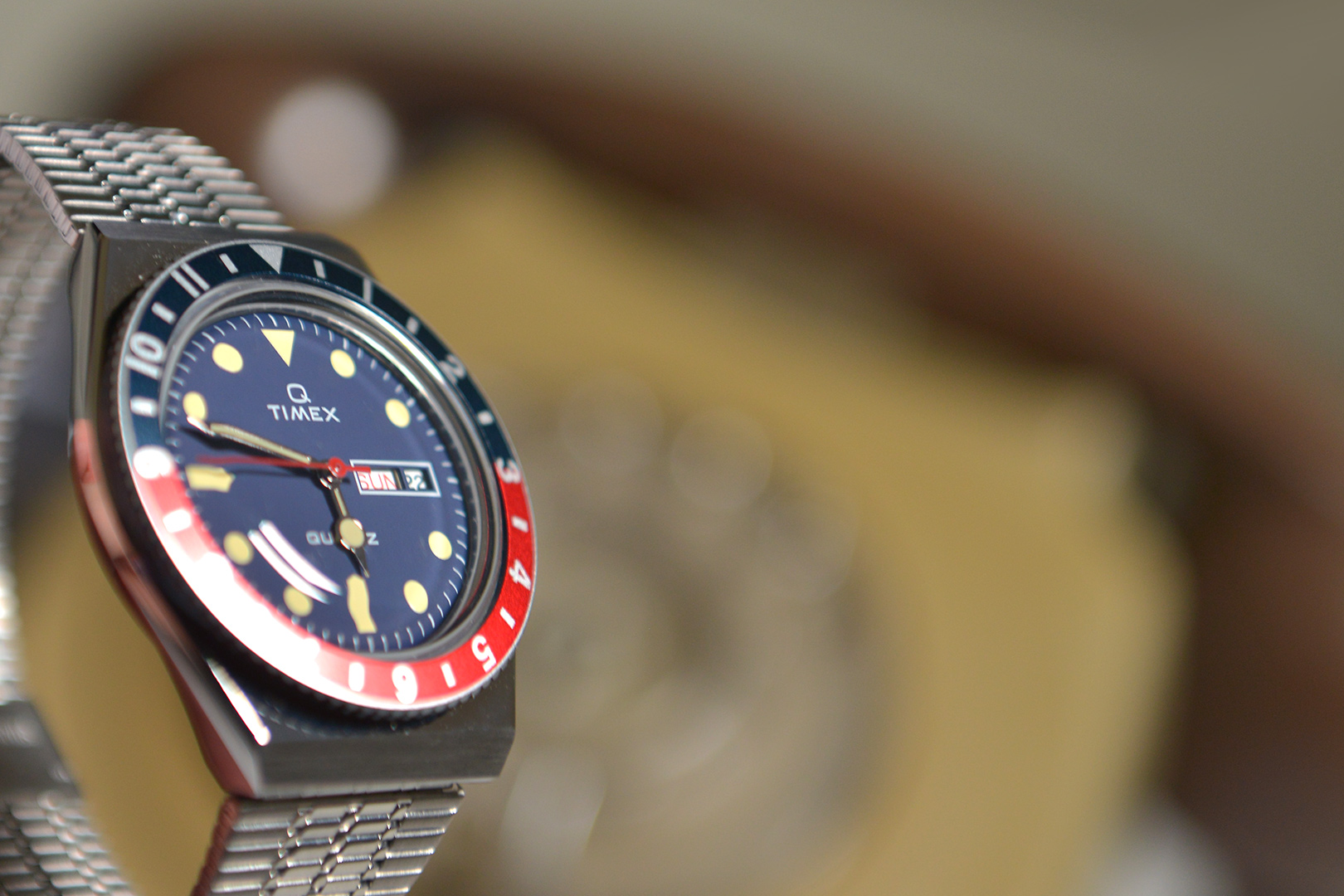 So the final verdict on this little guy is that I love it. I was chuffed to bits to get a hold of one from the Timex site and has read all about the flippers and scalpers on ebay. The good news there is that with this latest batch and all the wannabe touts, the prices for “brand new” watches on the bay is flat. You can pay literally £20 over RRP and get yourself the watch you want. Checking back a few months on the Completed Sales / Sold listings people were making £400 per sale, so now is the time. 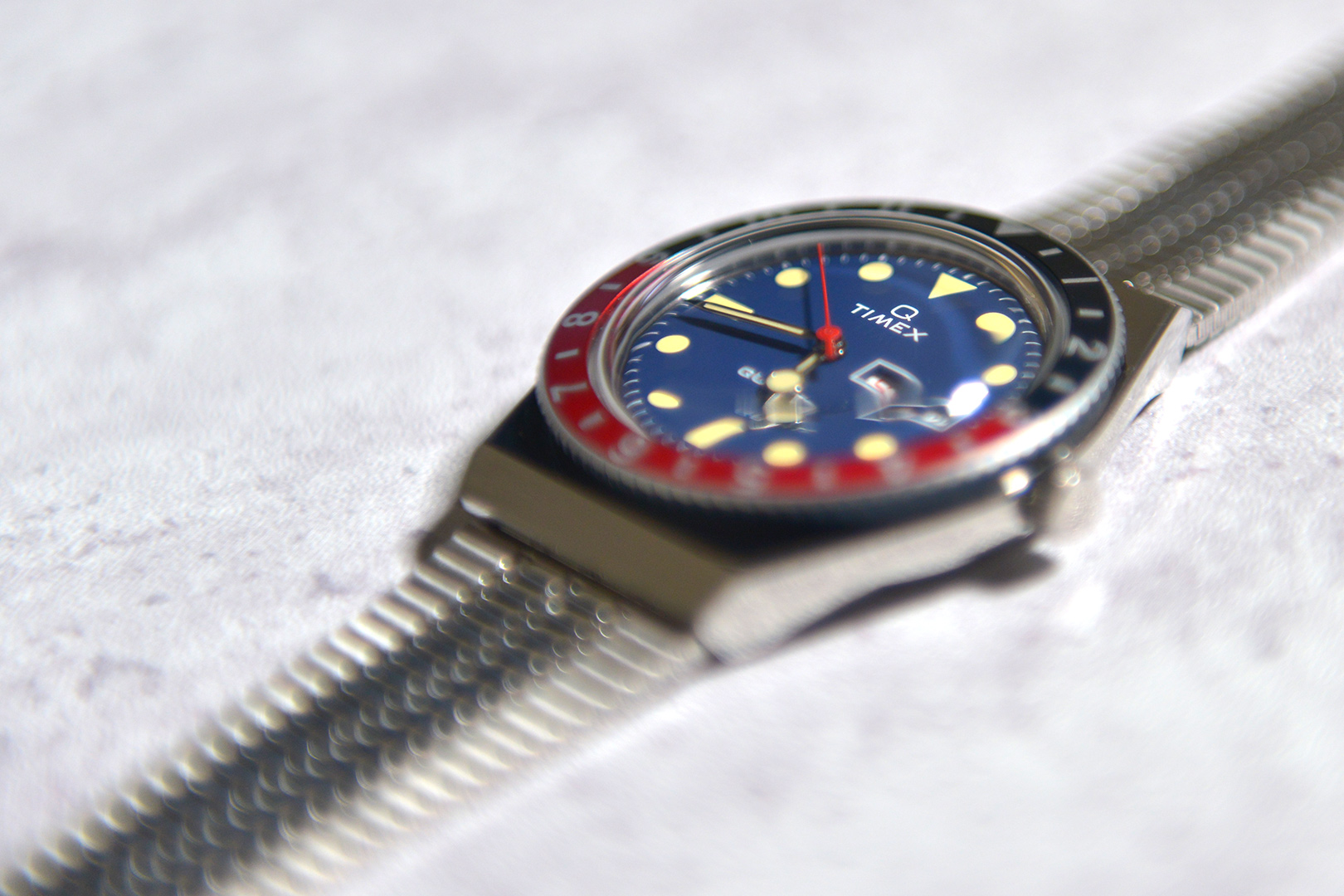 Who knows if Timex will get the stock right in this next batch, I hope they do. It wasn’t pegged as a limited edition so why strangle output? I mean who do they think they are, Rolex?