“That’s one small step for man, One giant leap for mankind” 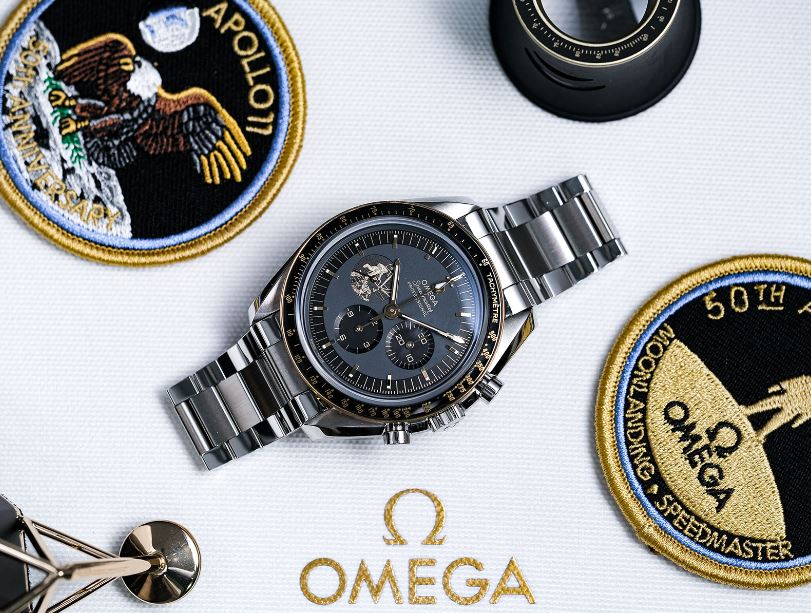 Mankind has always been drawn to conquering unconquerable challenges through innovation. We have never been the most adept at anyone physical task, unlike most predators.

However, the ability to innovate, to develop tools and systems that allowed us to accomplish far more than we physically ever could has moved us right to the top of the food chain.

The moon, 51 years ago, was another conquest in the long history of achievements. Equally remarkable was Omega’s ability to design something that was purely mechanical and have it survive the harsh conditions of space. That was, of course, the Omega Speedmaster that went up with the Apollo 11 mission. 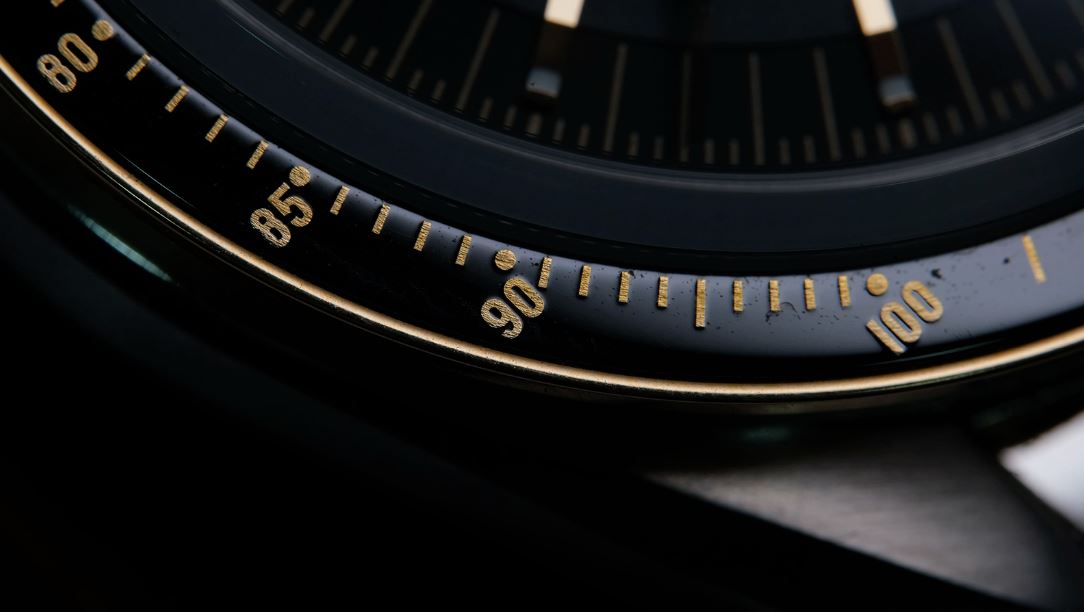 2019 was the 50th anniversary of this historic achievement and to mark the occasion, and Omega, as has we have come to expect from them, released three watches; actually it may be two.

Then again, it could be 2 limited editions and 1 limited production piece.

If you look at Omega’s website, it has 2 pieces designated as Apollo 11 50th Anniversary watches. It has another 2 that are termed as 321 Calibre watches, these are the limited production watches.

In the accompanying video, I got the number of limited edition watches wrong. It is 2 not 3 as the platinum is not a limited edition release, I apologise for that. Then again, I feel that I am not solely to blame. After all, Omega does not have the best naming conventions. After all, the two limited-edition releases are termed as “Speedmaster Moonwatch Anniversary Limited Series Apollo 11 50th Anniversary”.

That is before we distinguish between the 2 models. To get that distinction, you would have to look at the smaller print which describes the steel version as the “Steel on Steel” model and the gold version as the “Moonshine Gold on Moonshine Gold” model. So to summarise, the watch I have for review is actually named “Speedmaster Moonwatch Anniversary Limited Series Apollo 11 50th Anniversary Steel on Steel”. Talk about long names. Anyone who finds the new Tudor Black Bay 58 Navy Blue too long clearly has not researched Omega watches. Don’t even get me started on reference numbers, which in this particular case, is 310.20.42.50.01.001.

While I understand that each section of the reference helps Omega identify a colourway or a type of strap or some other detail of the watch, could there not have been a better way to go about it? Perhaps it is an indictment of the limitless limited editions that Omega has released that necessitates this form of reference numbers. 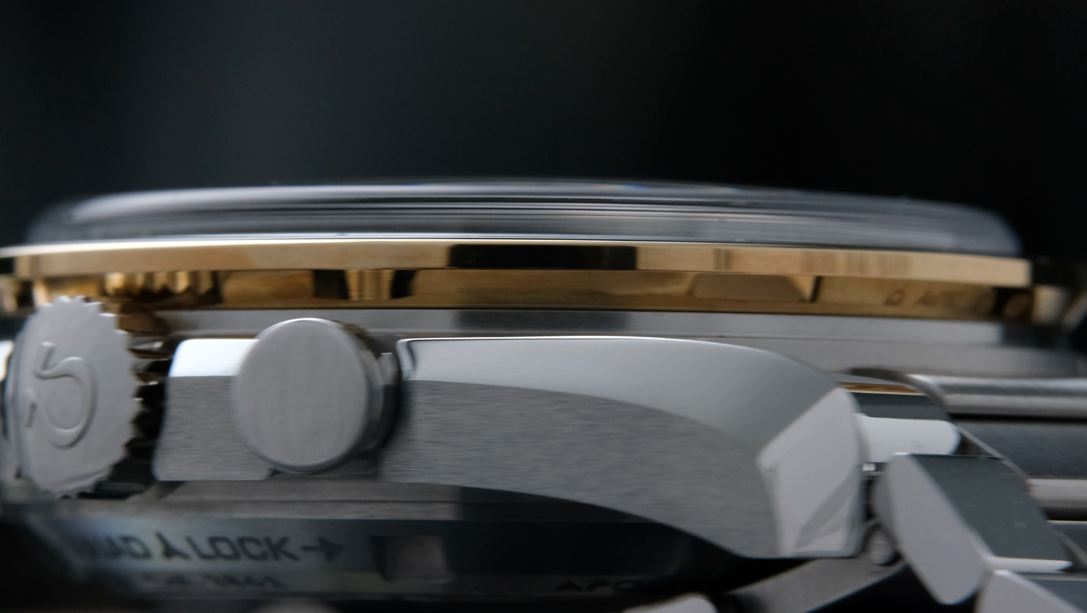 Naming conventions and reference numbers aside though, this steel watch is a pretty great celebration of the 50th Anniversary of the moon landing. While it does not have the same lustre that the Moonshine Gold on Moonshine Gold may have, (why the double repetition is beyond me), this steel variant is not without its charm.

It is somewhat of a two-tone watch with the bezel, indices and hands made out of solid gold; which also makes the name “Steel on Steel” a completely somewhat ironic (I know this it means a steel watch head on steel bracelet but still… I promise this will be my last complaint on the names).

The use of yellow gold in the bezel and on the dial is apt of a 50th Anniversary celebratory piece and warms up the space reminiscent bluish-grey dial beautifully and adds a touch of luxury to the watch. Similarly, the rich black ceramic bezel raises the watch to a more refined and luxurious standing over the more common Speedmaster Moonwatch Professional Chronograph. 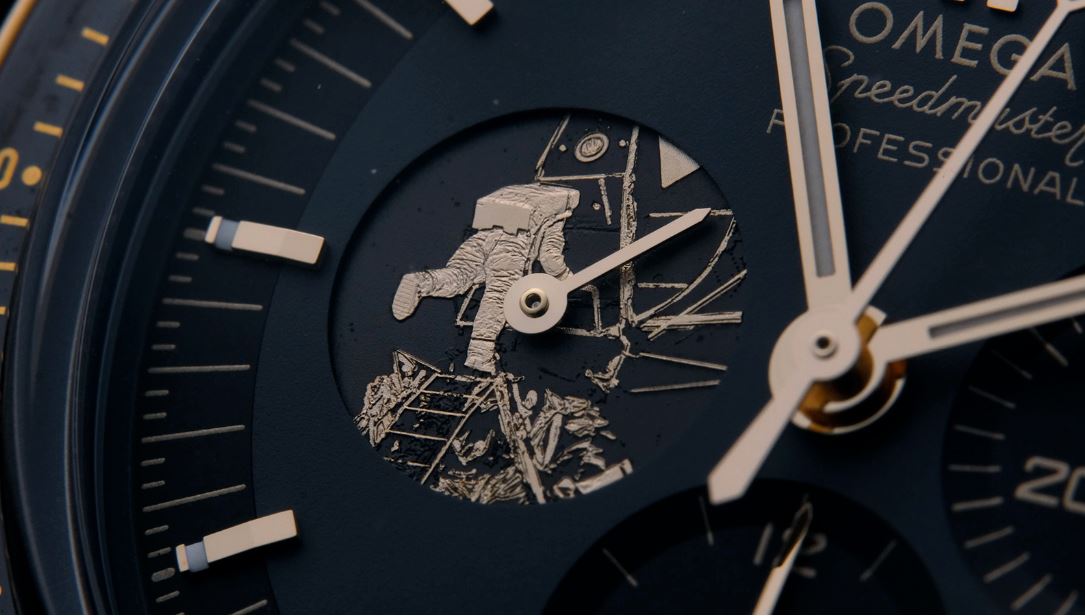 As is typical of Omega’s commemorative limited editions, I also really like the gold engravings/embossing on the 9 ‘o’ clock sub-dial of Buzz Aldrin’s behind. Sure there may be questions about how appropriate a picture this was. But given that this was the first picture of a person donning the Speedmaster on the moon, I can understand why Omega went with it, after all, we can’t be curating pictures from such monumental events just for better photo optics.

In any case, given that the image is on the sub-dial, it wouldn’t be right up in your face after all. The moon landing hallmarks also extend to the solid case back of the watch with an image of Buzz Aldrin’s own footprints which is definitely a nice touch for fans of this historic event. 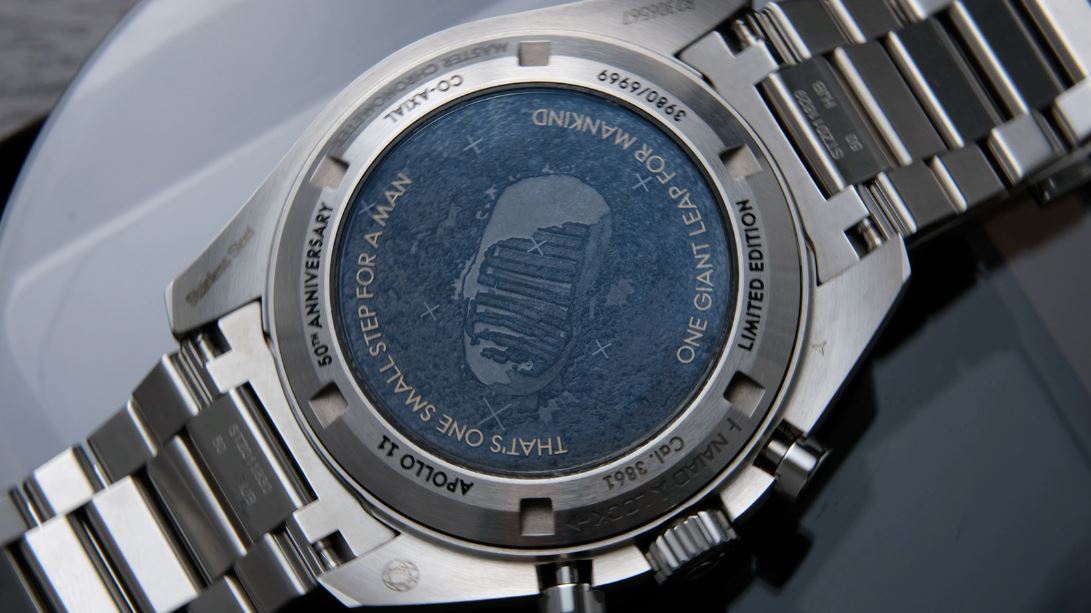 While it is nice to see the footprint as well as the iconic message that Neil Armstrong sent back to Earth on the case back, I do wonder if owners would have been better off with a display case back on this commemorative piece. After all, the watch houses the newer Calibre 3861 which is the first META-certified chronograph movement to make it into a Speedmaster Moonwatch. Given that Omega took the trouble to decorate the 3861, unlike the 1861 movement (you would have to get the Speedmaster with the 1863 movement to have that decoration), it feels like a display case back would have been the more natural choice. On a slightly separate note, the new movement also allows for a hacking seconds, a feature that was frustratingly absent from the 1861 movement. What is the point of having an accurate watch, if you cannot set it to the second? Thankfully, the 3861 rectifies this issue. 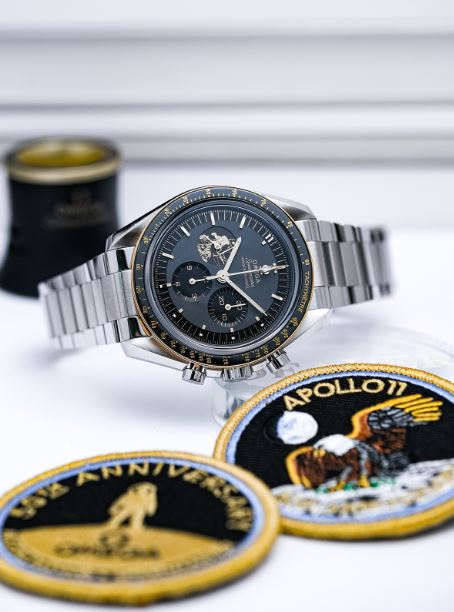 What has not really be rectified though, is the relative difficulty of using the crown on this Speedmaster. It is not easy to grip at all, difficult to pull out and also inconvenient to wind, something which should have been revised given that this is a manual wind movement. While there is some value to keeping things close to the original, usability should never be compromised for nostalgia. I am somewhat curious though, to know how astronauts could have possibly set the original Speedmasters or wind them had they needed to while donning their suits. 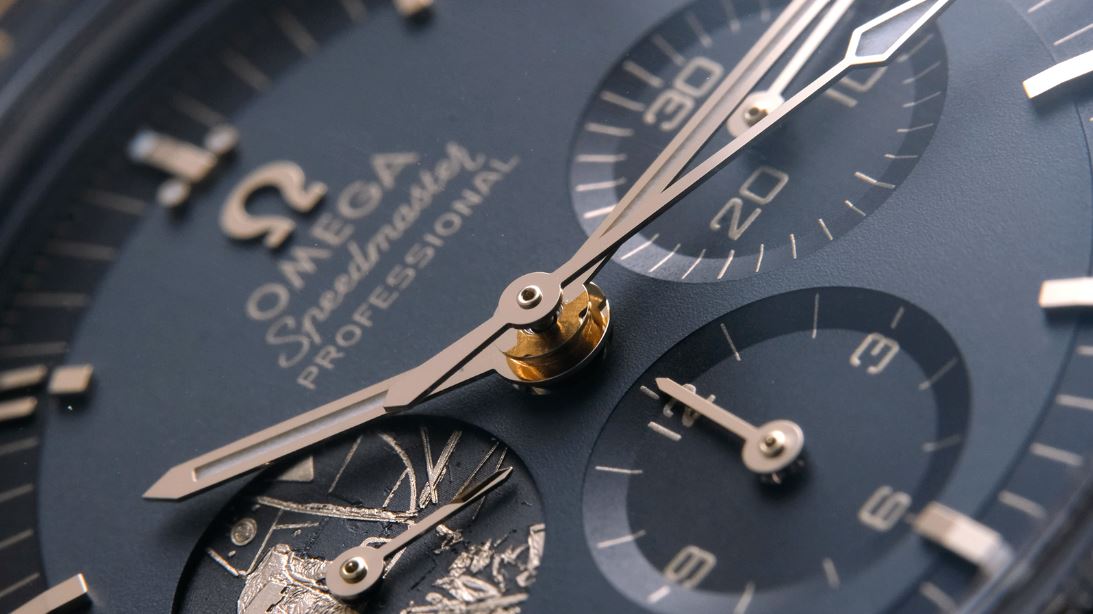 To be totally, accurate, this isn’t an entirely new bracelet, given that it was modelled after the bracelet on the Speedmaster reference 105.012 which were the Speedmasters used on the Apollo 11 mission. Still, this bracelet, in my opinion should be on every Speedmaster if for no other reason than how extremely comfortable it is on the wrist. Its smaller flatter links makes the overall watch less bulky and also allows it to hug the wrist better, make it ideal even for smaller wrists like mine. Given that this same bracelet is on the “Ed White” Speedmaster that was released earlier this year, and that watch is a slimmer 39.7mm watch, I am really hoping I would get a chance to try that watch. 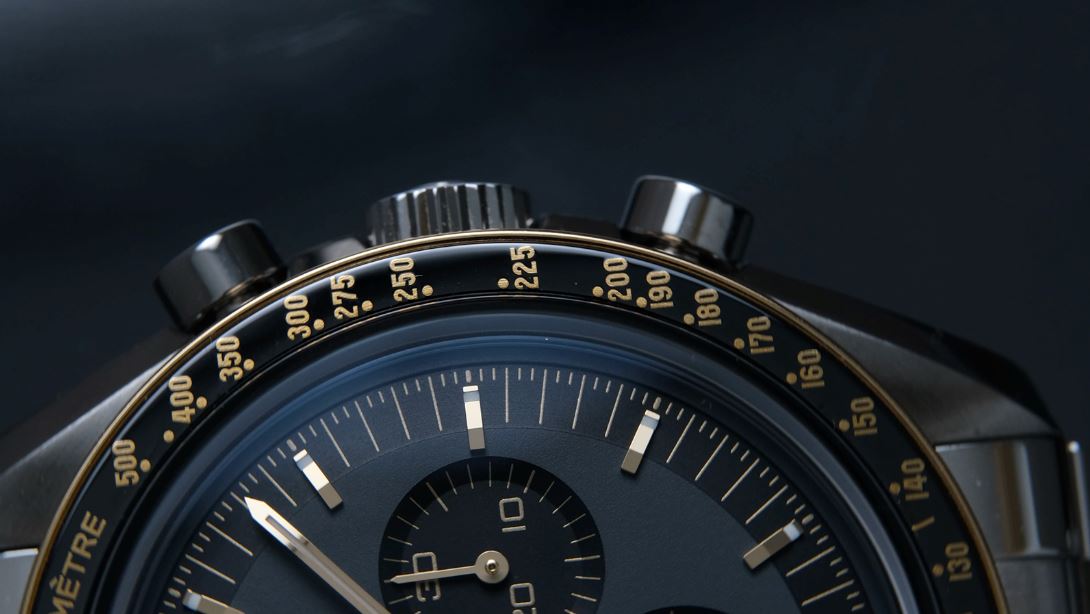 Overall, this watch was a fantastic release from Omega and allows fans of the brand and the anniversary to have an accessible option both in price and quantity (given that this was in typical Omega fashion limited to a paltry 6,969 pieces) to commemorate the occasion. Its design and use of colours and materials were spot-on to mark this historic event and I am truly glad, I got to enjoy this watch on my wrist, even if only for a few weeks. 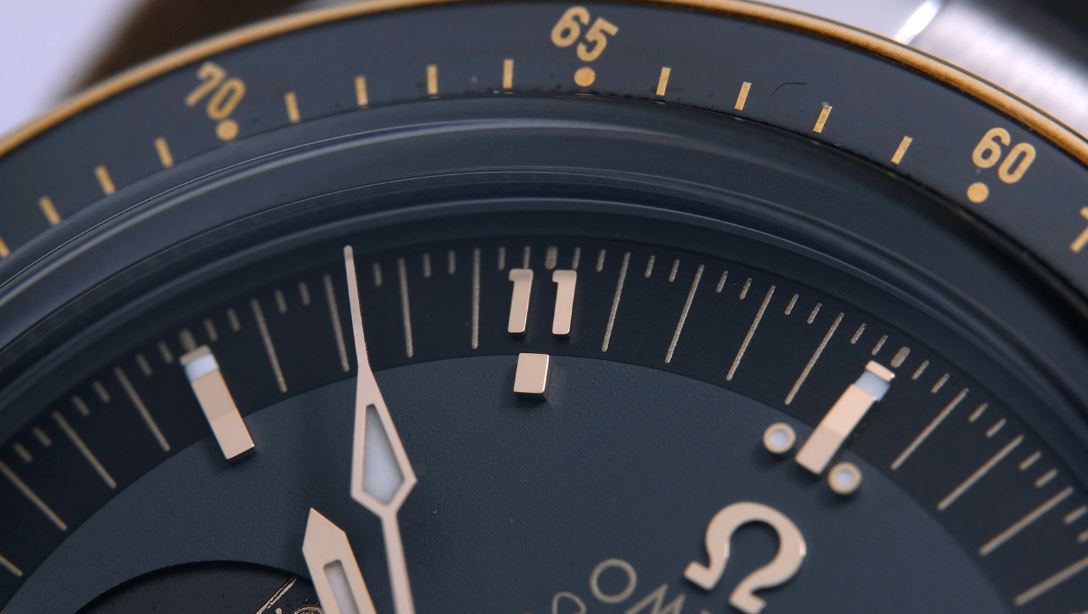 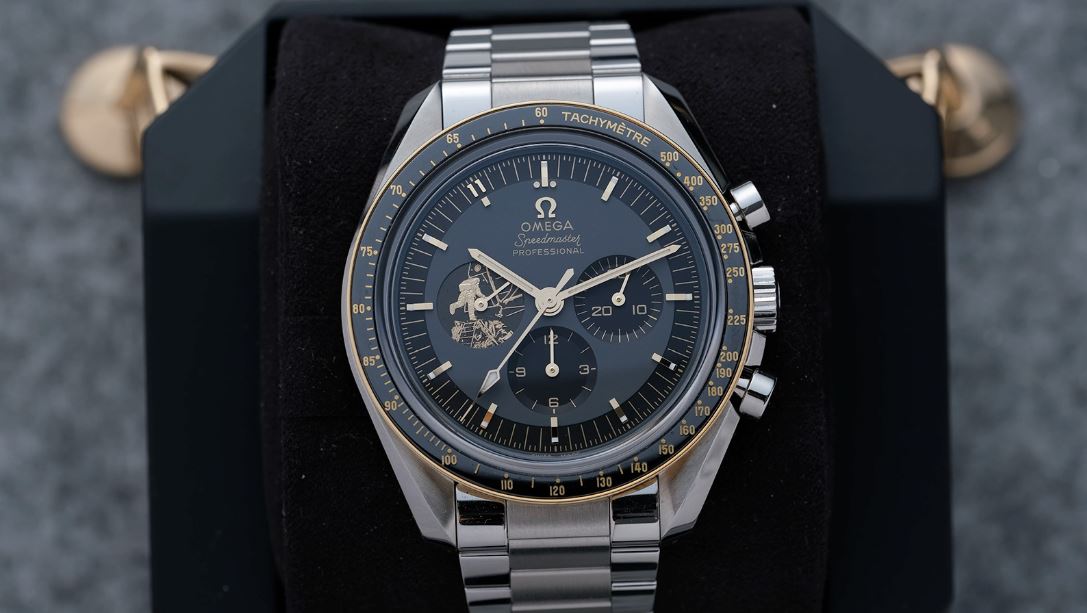 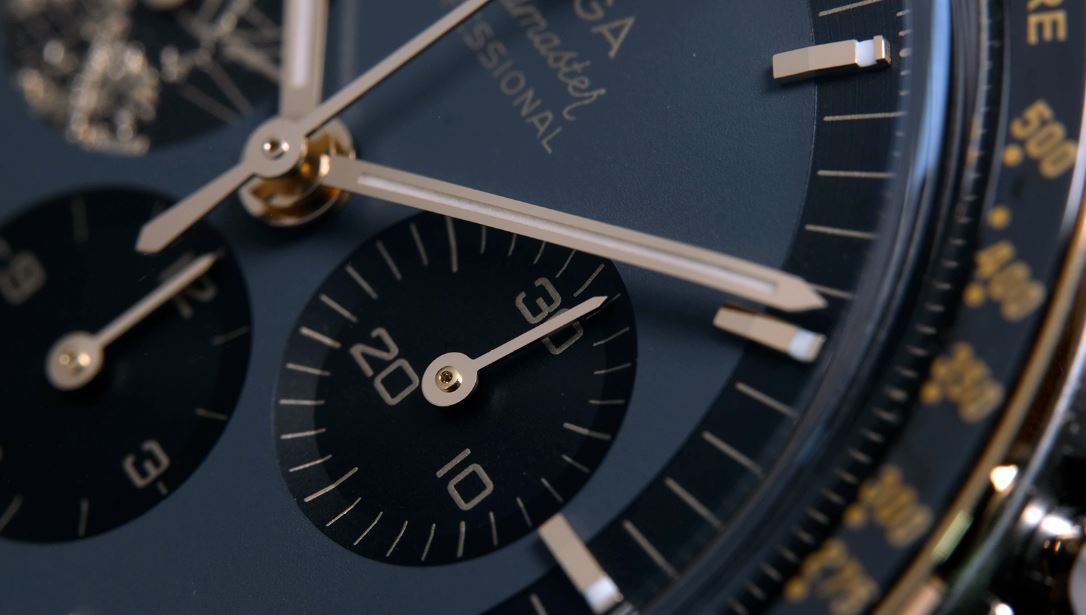