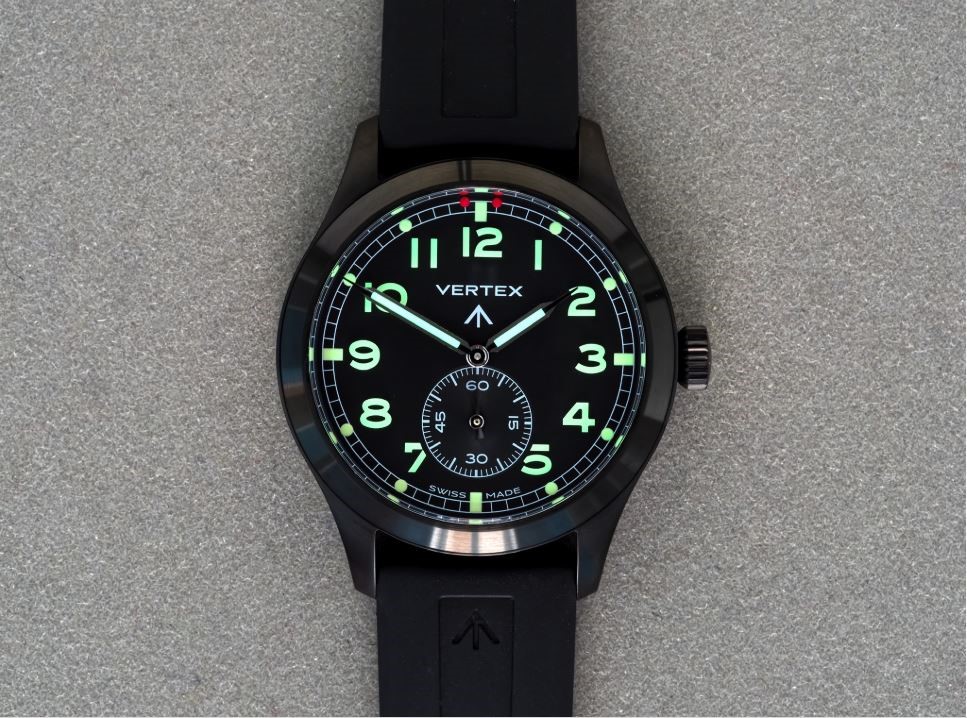 A few months ago, our overlord Rick asked the writer’s group if one of us could cook up a piece on the “Dirty Dozen”. This being a Scottish Watches article it didn’t surprise me in the least. War movies are a common theme on the “watch” podcast, and any film starring the great Lee Marvin and Charles Bronson deserved a review in my humble opinion. But then the chat went on and it emerged that “the dozen” were going to be auctioned off in London! Now I thought, either the estates of the original dirty dozen cast were in such dire financial straits that they needed to resort to selling the remains of their beloved deceased (or living in the case of Donald Sutherland), or I must have missed something. Turns out the Dirty Dozen is a collection of 12 military watches, commissioned by the MOD to 12 manufacturers during World War 2. If you would like more info read Phil’s excellent article here . Bless my asinine ignorance! 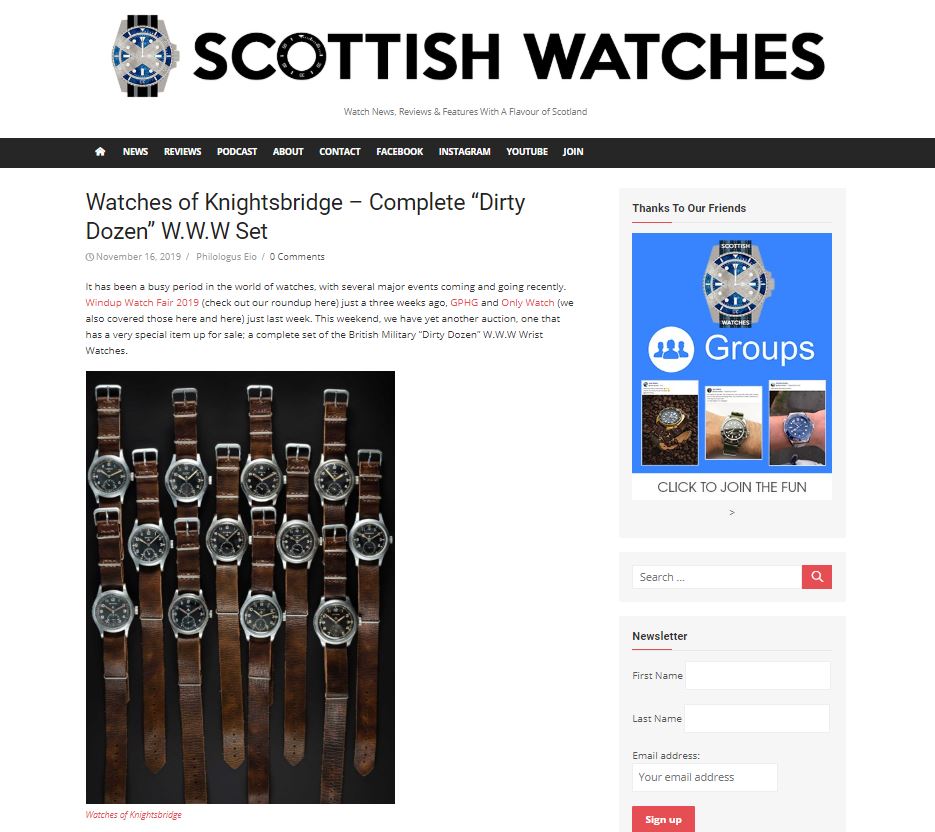 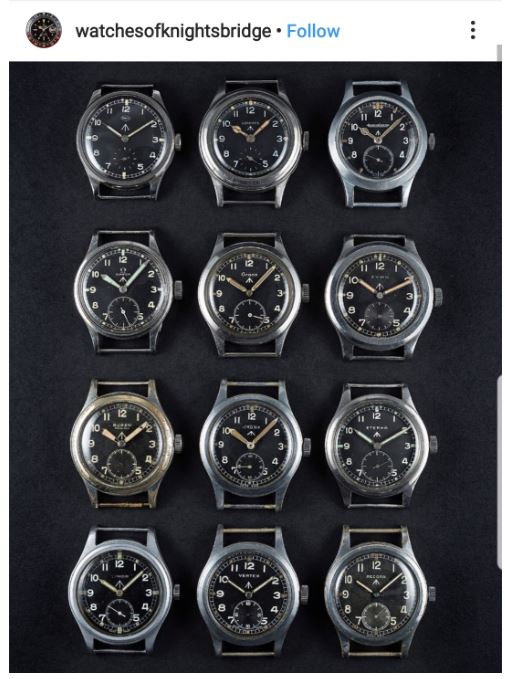 Of the twelve MOD contractors (which counted the likes of JLC, Longines and Omega), Vertex was the only British one. Founded in 1916 by Claude Lyons in Hatton Gardens, like many watchmakers it succumbed to the onslaught of quartz watches and closed shop in 1972, what a pity. 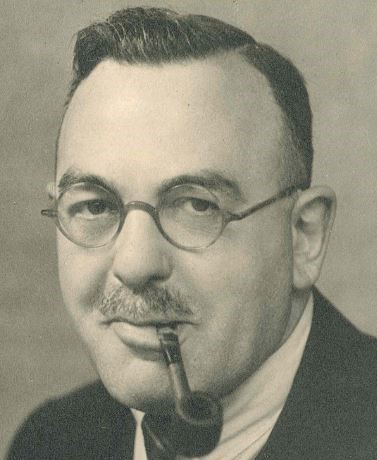 Come 2015 and Claude Lyon’s great grandson, Don Cochrane, bought the Vertex Brand back from the ashes with the intent of designing and marketing an updated version of the original Cal 59 MOD W.W.W. (watch, wrist, waterproof). The year 2016 saw the birth of the M100 a reissue of the original Cal 59. Sadly, the watch could only be bought by referral, or by ex-servicemen owners of the original vintage piece. 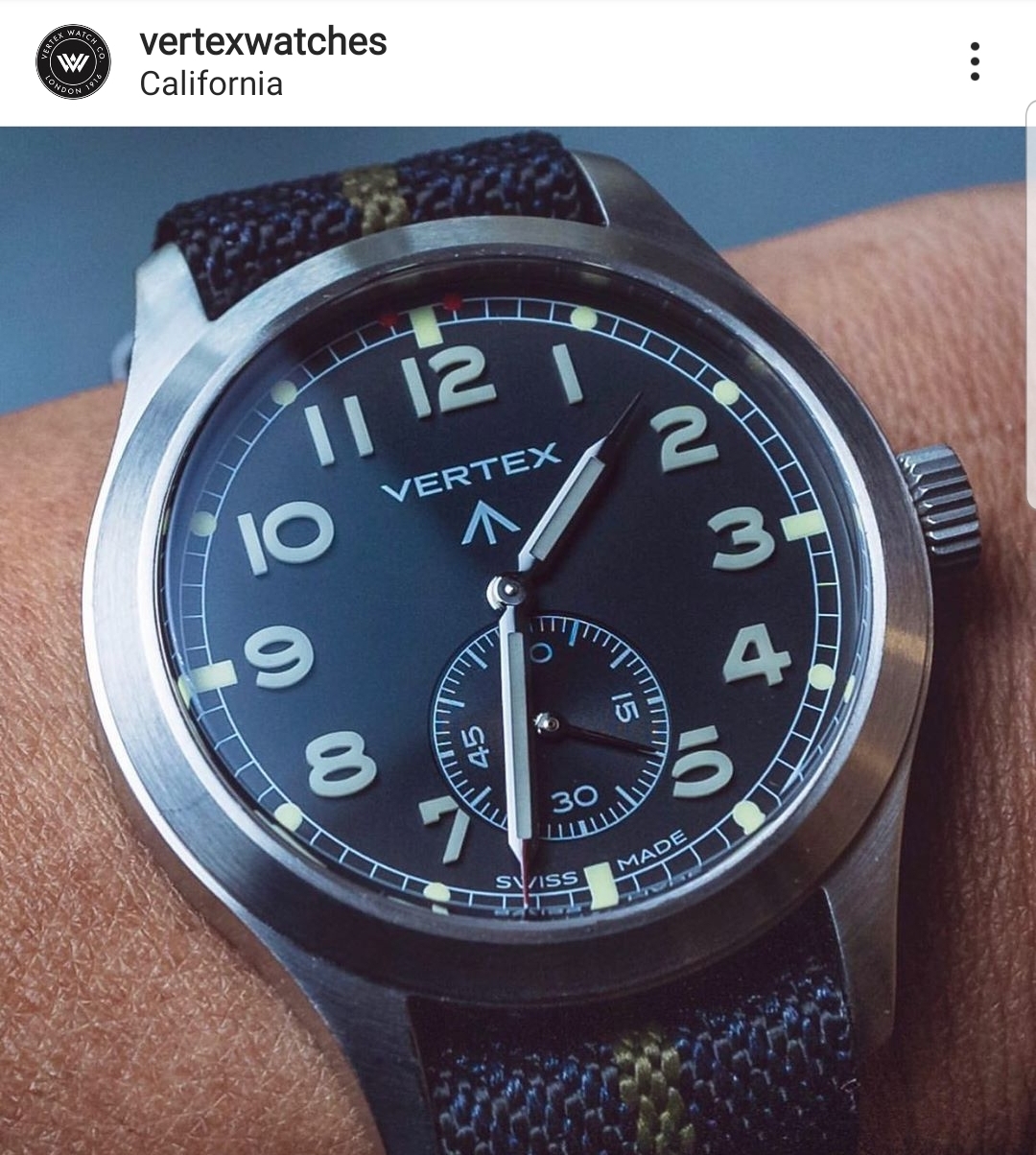 This unobtainability really cheesed me off, mainly because I liked the watch and secondly because I wanted one badly. Fortunately, in 2018 a limited edition 150 piece all-black DLC version, the M100B, was released. I jumped on that one, despite the fact I liked the steel one just a teeny bit more. 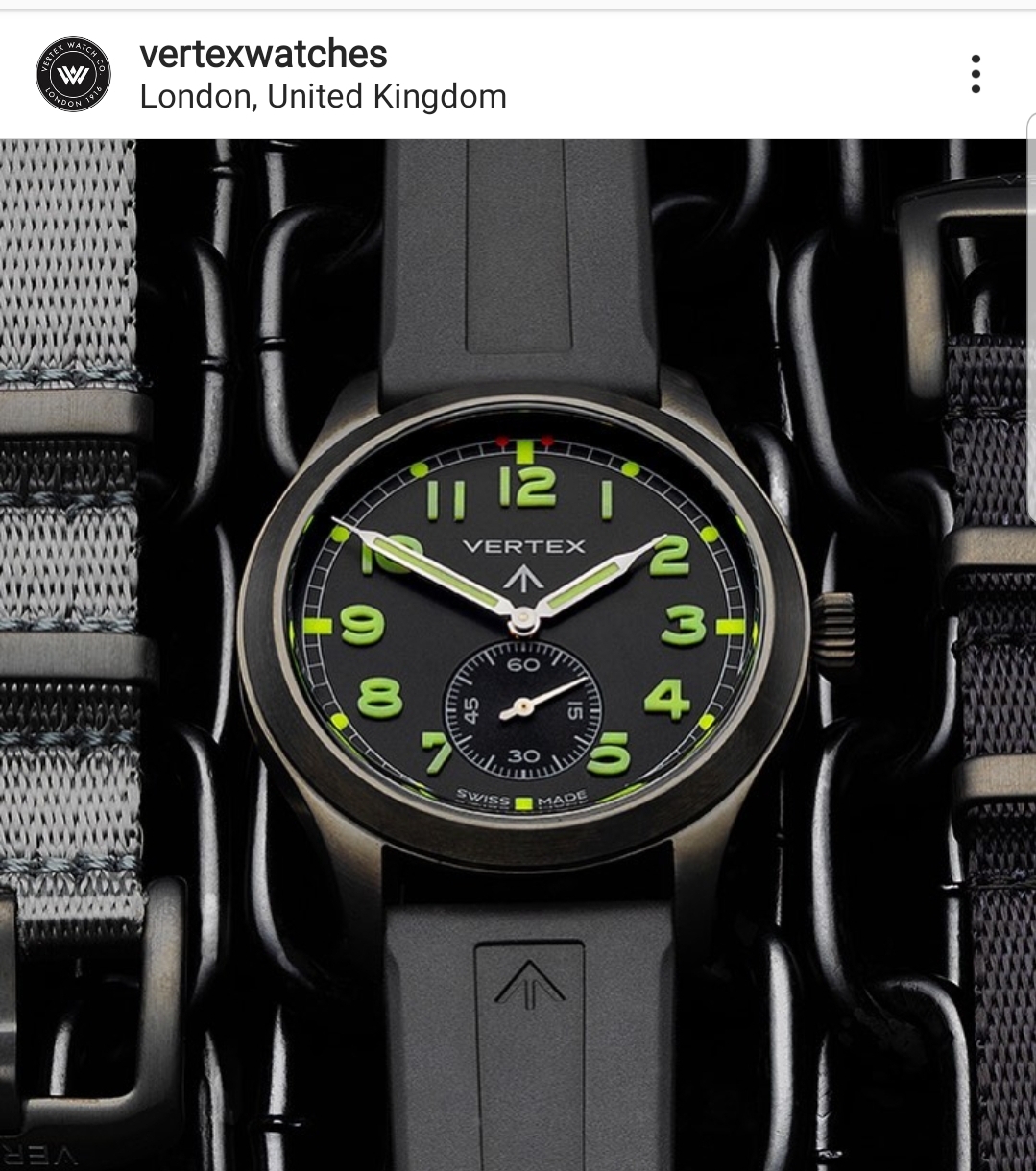 Don’s team did a exemplary job: the watch is a near identical copy of the original watch but updated to a contemporary size of 40mm, new innards (a customized hand wound ETA 7001 movement), water resistance of 100m, sapphire crystal and a showstopper dial (more on that later). 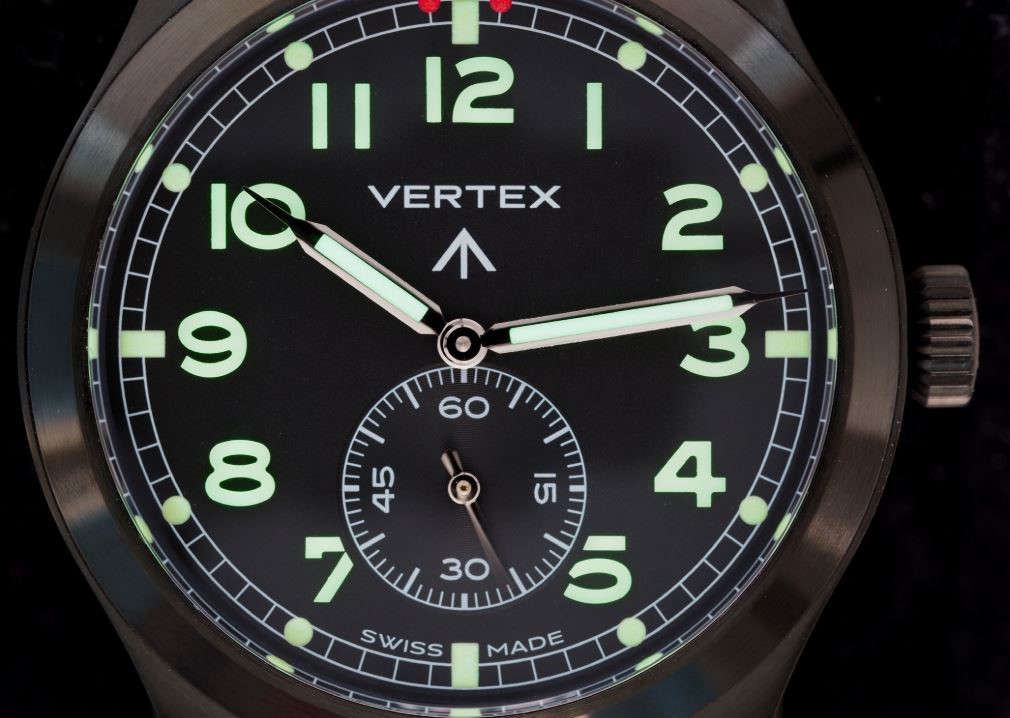 The watch arrives in its own tough case Peli Case; it’s a nice touch even though I doubt I’ll be doing much with it (like all watch boxes). Inside, together with the watch, you get two thick NATO straps and a black rubber strap with quick release spring bars. The latter product is excellent. The rubber material is soft, smooth but not at all flimsy or “sticky” like one of those awful 4.99 £ cheap silicone straps you can buy online. The MOD broad arrow is embossed near the lower lug and the signed black buckle is solid and has the company name etched on it. The case shape has the classical field watch looks with curved sides, a small unguarded crown and sloping lugs. The finish is all brushed, and high class brushing at that. 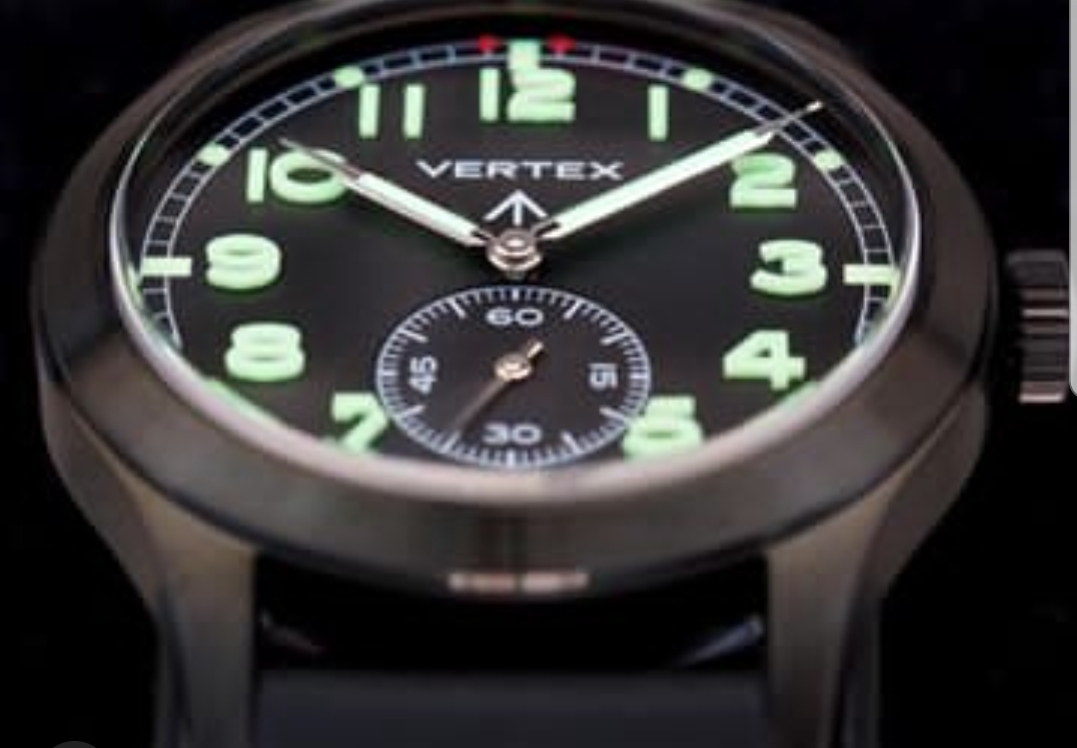 But the party piece is the dial. Seen straight on from the top it is a near spitting image of its ancestor but tilt the watch forward and lo and behold everything goes 3D! The large roman numerals are solid molded blocks of ceramic infused with high grade Swiss Super-LumiNova. 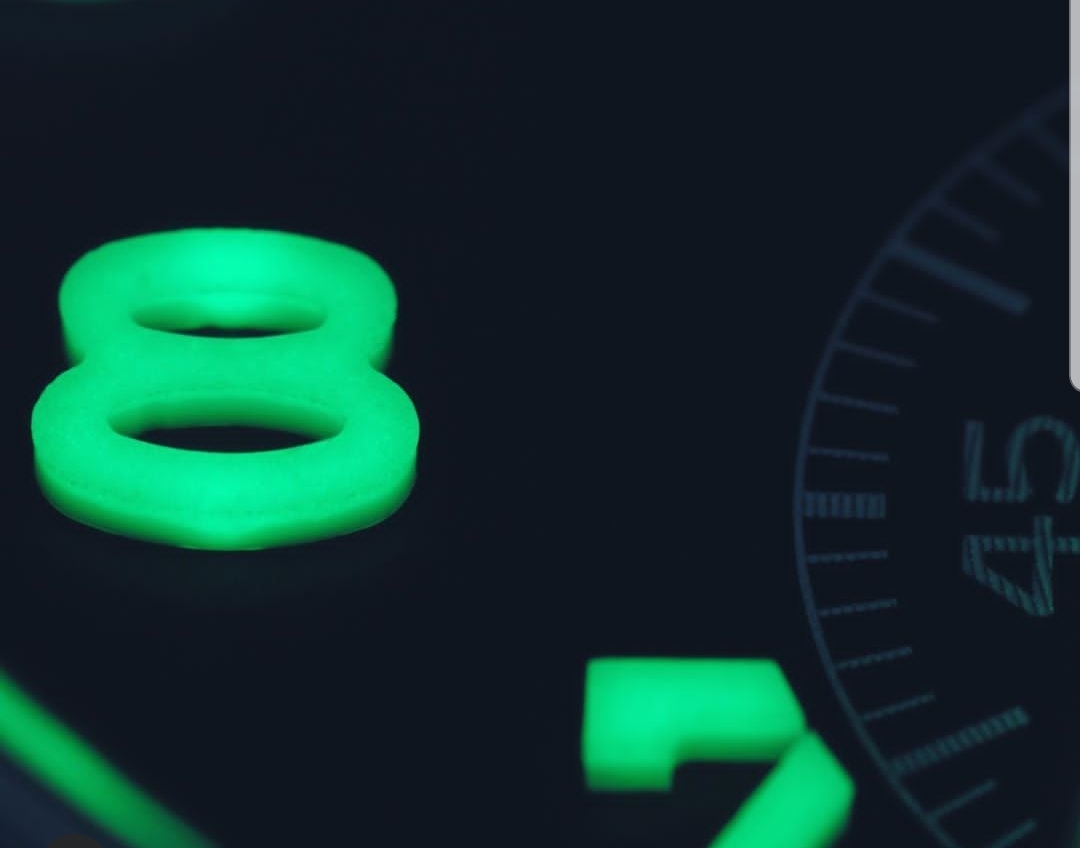 They must be seen to be believed. I’ve witnessed this type of marker only on one other British watch. The lume the dial puts out is insane, it looks as impressive in the dark as it does in daylight. Here’s a short video I created for all the macro and lume nerds out there.

The dial is completed with a rather large small seconds sub-dial: two red dots are placed left and right of the 12 O’clock marker and give the dial a splash of colour. The highly polished and lumed hands are of the “syringe” type and the outer rail-track minute track has extra lume pips printed at the 5 minute positions. The iconic MOD broad arrow sits proudly below the Vertex branding. Like the case, finishing of the dial is sharp and beyond reproach.

On the wrist the Vertex wears perfectly, especially when fitted with the rubber strap. The sweet dimensions, thin profile (a tad over 10mm) and gently sloping lugs just make things work. The NATO straps make it look a bit bulkier but add to the vintage military look that was intended by the designers.

As much as I adore this watch there are some things I think could have been done better. For starters I would have put lume on the seconds hand: I know that would have distanced the watch from the original design, but I miss its presence nonetheless. Secondly, the site states that the movement is highly finished in rhodium with Cotes de Genève: I’ll take their word for it since the case-back is solid; a display case-back would have been a boon. I’m sure Stanley Kubrick would have been proud of them: rumor has it that during the filming of “Barry Lyndon” the legendary director insisted that period costumes had to be hung inside all the cupboards even if nobody ever opened them on scene because that’s the way it would have been in reality. Talk about attention to detail!

And then there’s the price, £2650. That’s a lot of money; granted it’s a very limited and exclusive piece and there’s a lot of work that has been put in it, but I can’t help thinking that a sticker below 2k would have been fairer. Since I don’t know the all-in production costs I won’t complain too much.

My conclusion is that if you want to own a watch that recalls a great wartime story without the pitfalls of buying the actual, crusty, banged up and unreliable vintage cal 59, this is the way to go. It’s built like a tank, finished like a luxury watch should be, and has a dial that looks so smart it’s got a Ph.D from Cambridge; and that’s priceless.