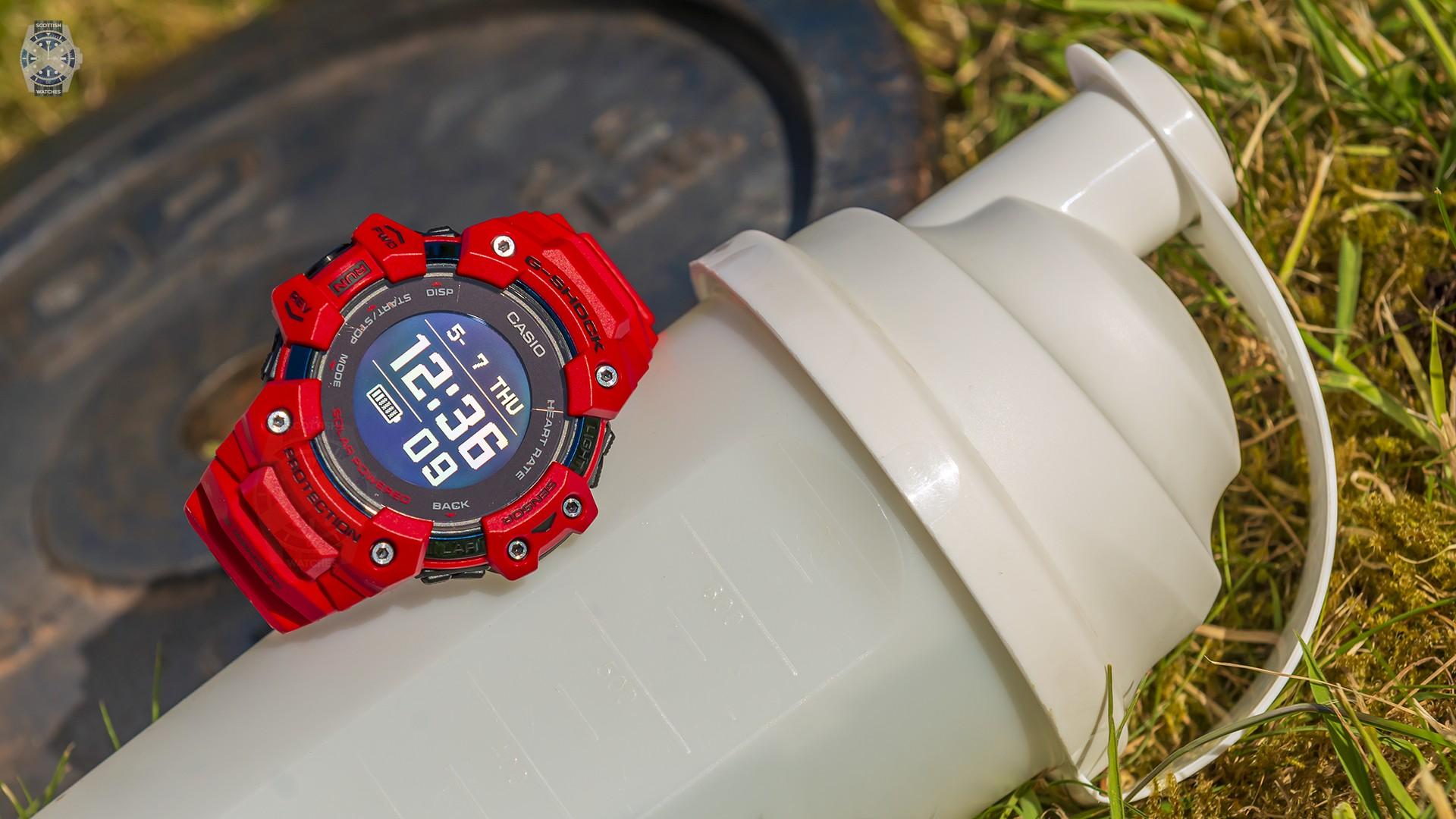 The G-SHOCK range of digital watches have been around for nearly 40 years now and from day one were designed and engineered to offer a tough and robust time telling experience that could deal with the rigours of day to day life – be it in the office, the swimming pool or in the theatre of war. But one area that was never really catered for was the wonderful world of wearables and fitness trackers. With this new GBD series Casio have raised the bar and we got to try out the brand new GBD-H1000 to put it through its paces. 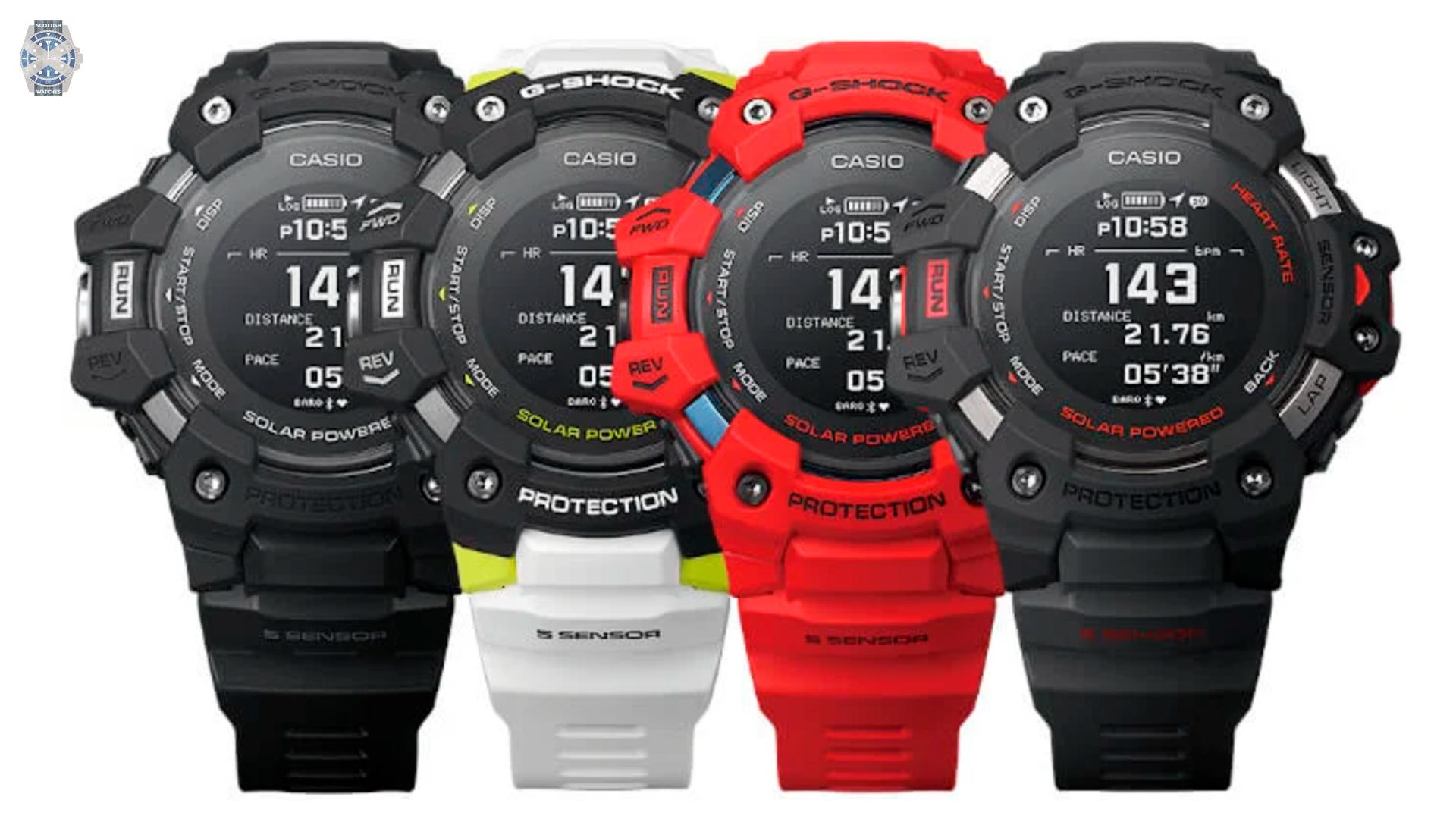 Fitness trackers and smart watches have been around for about a decade now, in fact my first watch purchase since the 90s was when I backed the original Pebble watch on Kickstarter all the way back in 2012. In those days of smart tech infancy, getting things to work was a kludge, it barely did and when it did it didn’t. Thankfully with revision and the big boys coming to town, the current range from the likes of Apple, Samsung, Garmin and now G-SHOCK are all more than capable devices, offering levels of accuracy only dreamed of a few years ago. 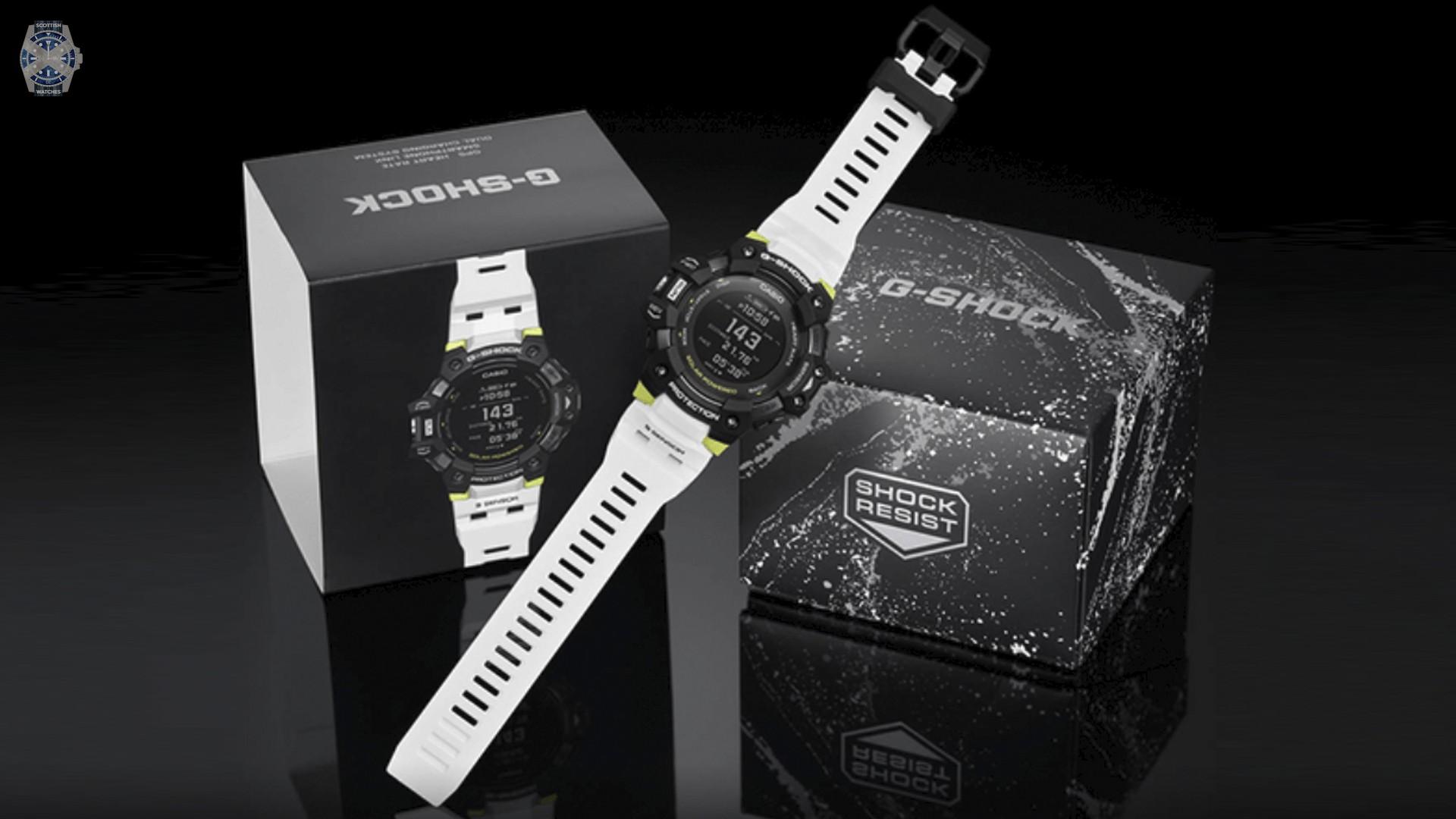 Although a little late to the game, Casio’s new GBD’s pack a lot of features into a familiar style but the first thing to note is that this is a hulk of a watch. G-SHOCK’s are known for their wrist presence, but the H1000 takes it to another level. Measuring 55mm across the face it sticks out like a sore thumb and is of a similar size to the Mudman and Rangeman offerings elsewhere in the G-SHOCK catalogue. 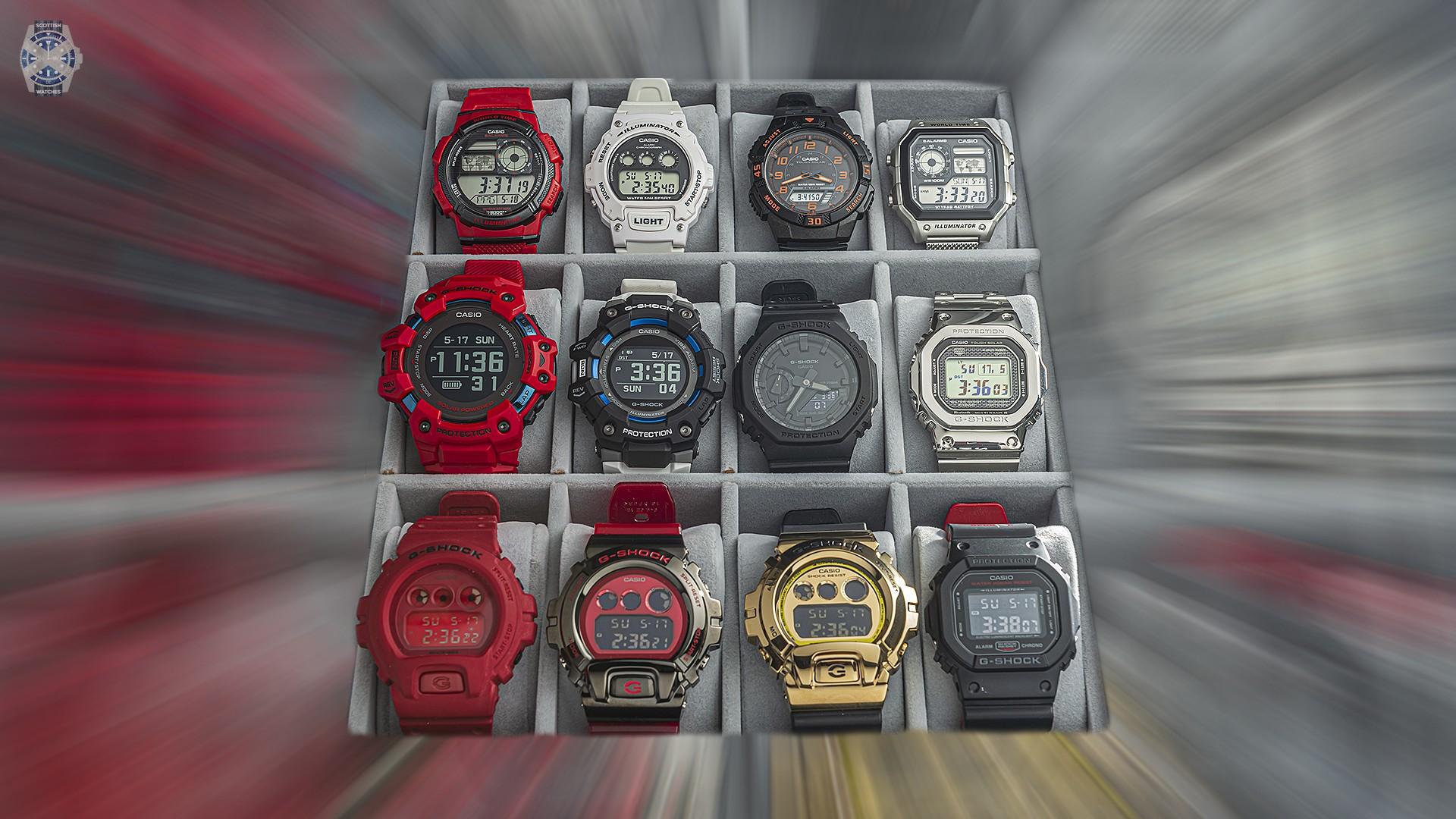 I was kind of hoping for an easy and intuitive entry into fitness tracking and with a solid number of Gs in my collection already I thought I’d manage to work my way around the buttons and interface with ease but alas that was about as achievable as riding a go kart and expecting to be able to drive a car. You need to invest a little time working through the menus either on the watch or via the new app that Casio have developed to work hand in hand with the H1000. 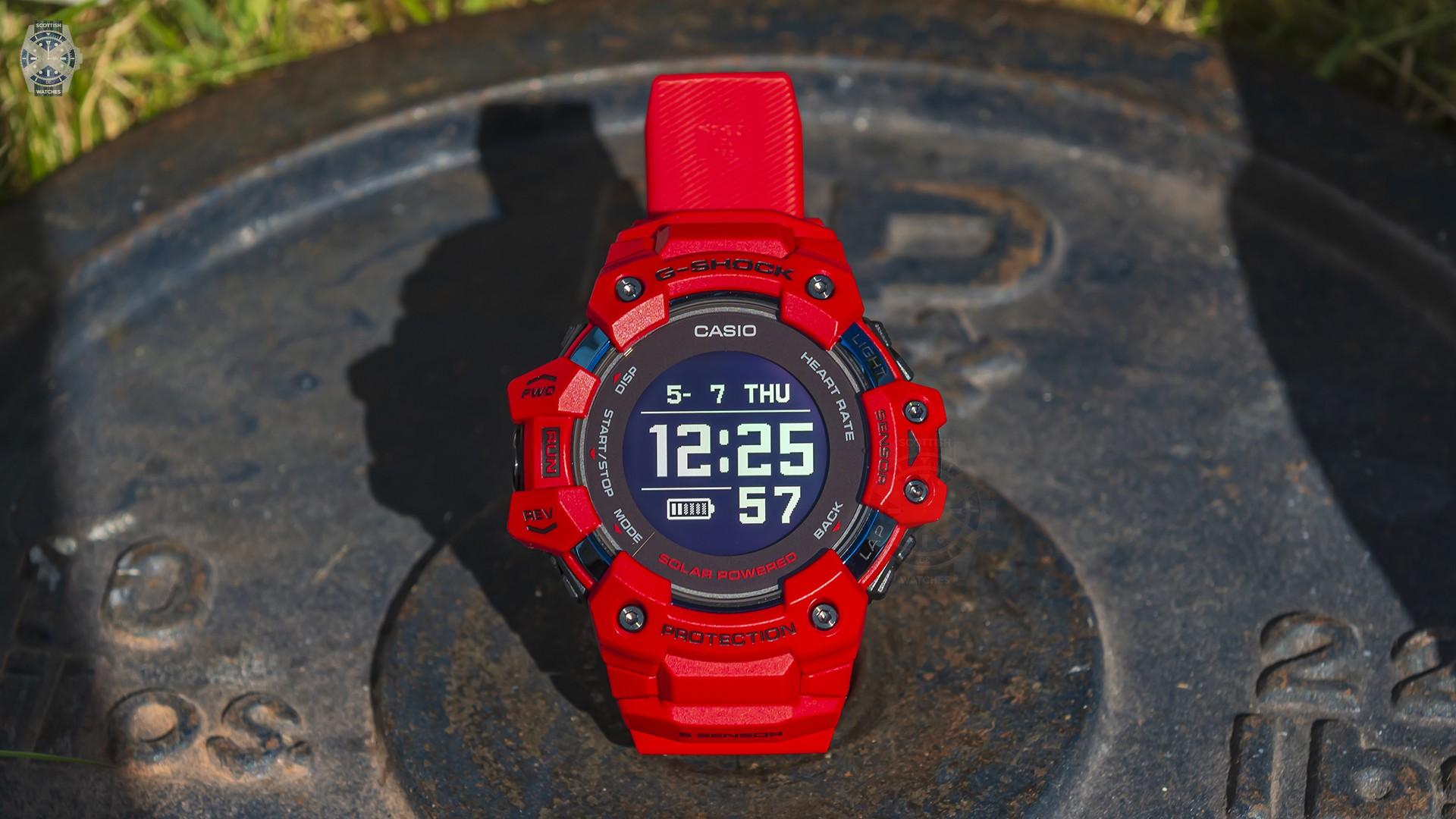 It’s a G-SHOCK through and through. The DNA is evident from the familiar feel of the resin strap to the caged watch head protecting the display from damage. It weighs exactly 100grams which if you’re used to other G’s might feel a bit on the heavy side, though being spread across that mammoth 55mm width it doesn’t feel quite as bad as you would expect.

For comparison I pulled a few other Casio G-SHOCKs out for a weigh in.

It wears very well, it’s not going to slide under any cuff whatsoever and with its shouty visual appeal will probably remain best for use during sports and fitness activities but if you want the full benefit of daily tracking and heart rate monitoring you’re going to have to accept the bulk and wear it full time. 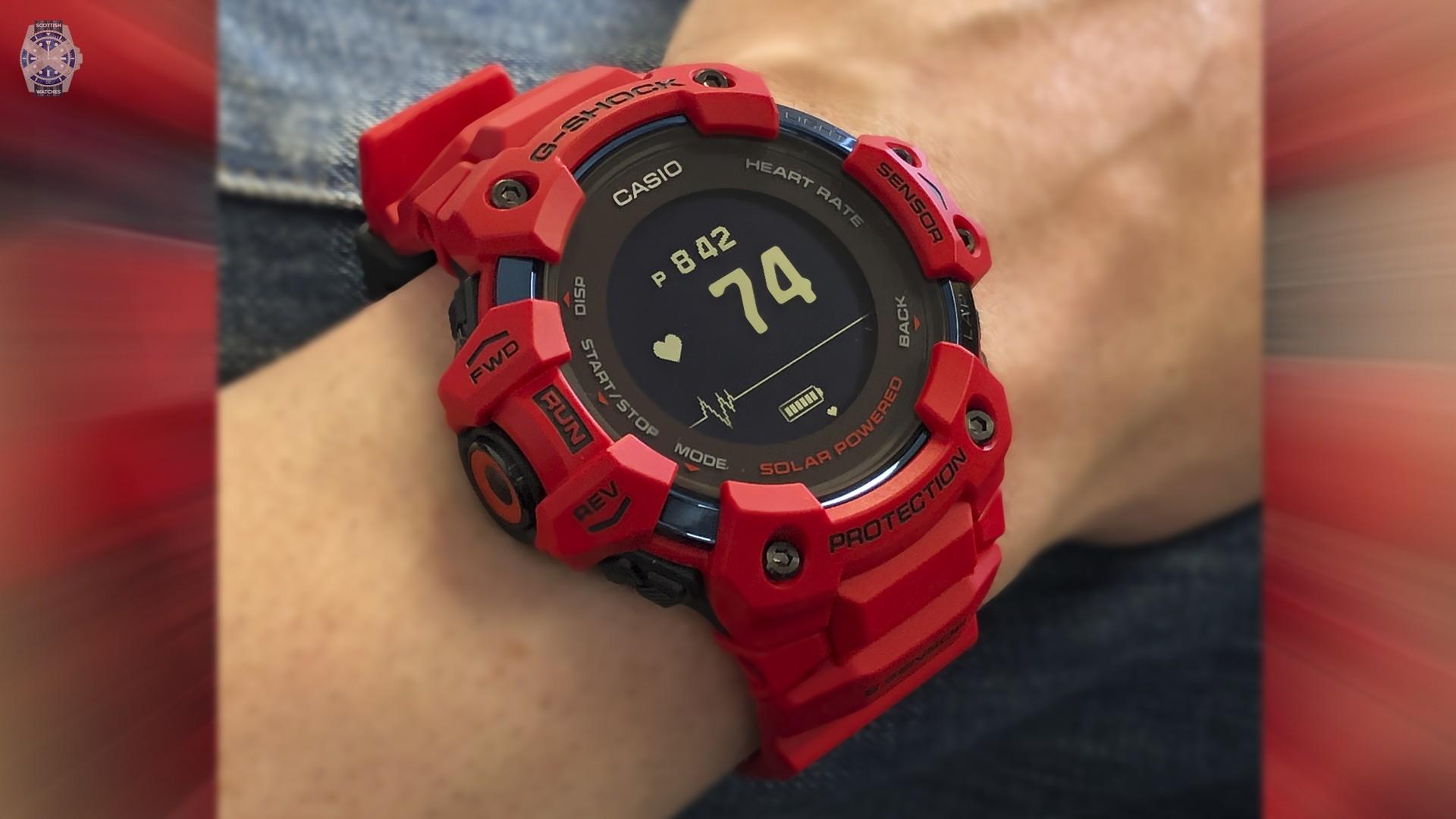 The display is something of note, not being a full TFT colour screen but a monochrome LCD unit that means it has better contrast for viewing plus brings with it lower battery use than other watches in the same domain. It reads well in direct sunlight, shade, indoors and when things get a little taxing on the peepers you’ve got the trusty illuminator button at the 2 o’clock position to keep eye strain at bay.

This is where the new G comes into its own with a slew of functions, sensors and features that all point towards giving you the ultimate in monitoring, logging and tracking – but will it deliver or fall at the first hurdle? 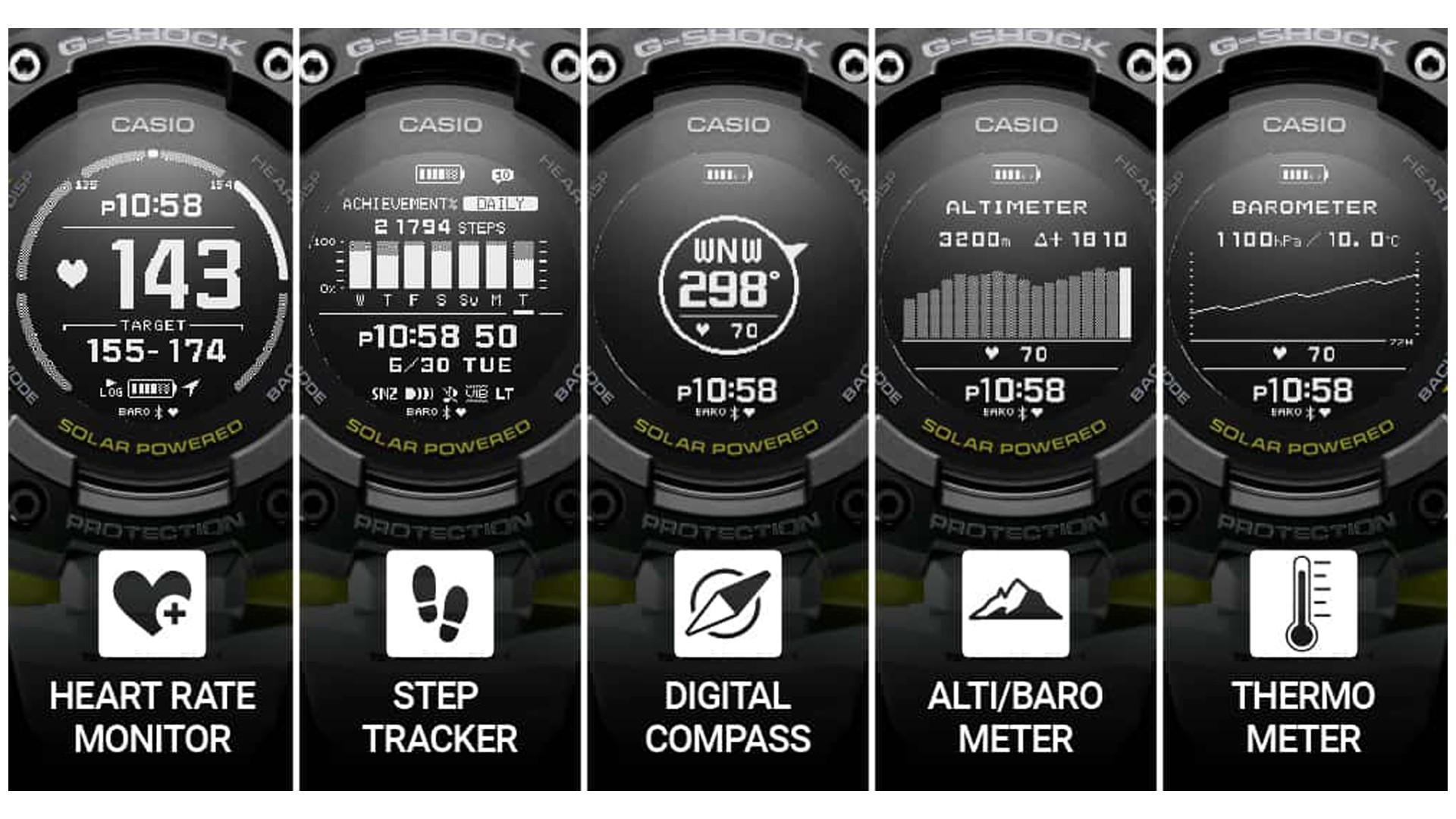 Our review could take a turn into user guide territory here if we were to go through each screen, menu and setting in order so instead of boring you with the drill down we’ll just cover the main points and how the watch delivers on each of the functions. With such a nested interface this is where you’re going to have to take the training wheels off a little and check out the user manual or view one of the Casio tutorial videos to get a feel of where things are. Since we’re not dealing with a colour display with an intuitive user interface, some time will need to be spent getting to grips with everything and making sure your profile is setup correctly and you know how to get the best out of the watch.

The biggest draw is the optical heart rate monitor that is core to the functions of the watch and in testing it’s proven to be quick to respond and accurate during exercise (even weight lifting movements where flexion can break the case back to skin contact) so that’s a check mark from the off. The integrated GPS receiver is also welcome and in combination with the accelerometer is used to detect when you begin your runs without having to press any buttons. It’s not dead on accurate but compared to other fitness watches it fairs pretty well and with this being Casio’s first foray into fitness wearables they have to be commended for hitting the mark. 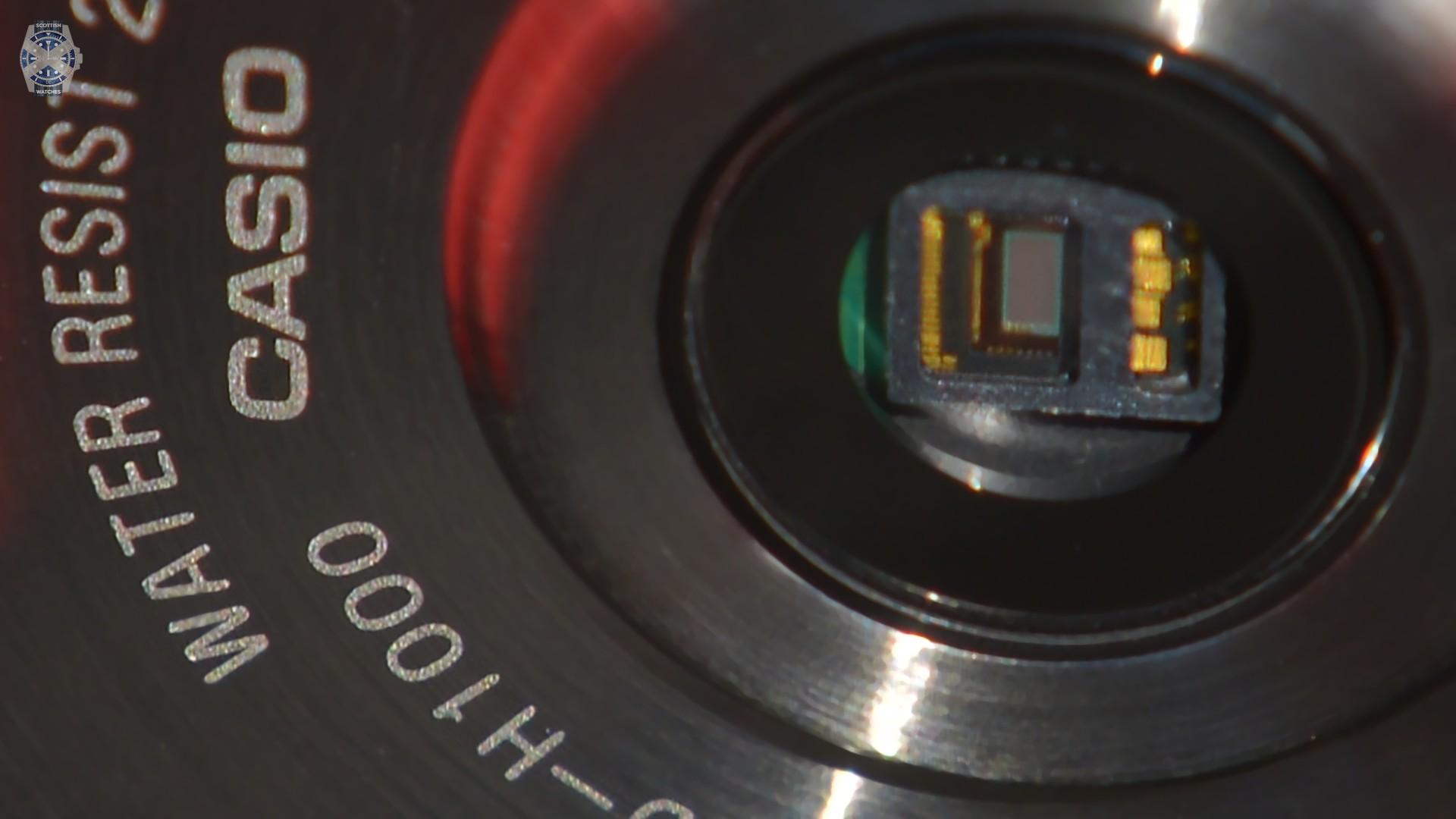 Add in the higher end functions you’d expect from a more expensive G-SHOCK and you get a thermometer, barometer, compass and accelerometer too which are all useful additions to time, distance and heart rate tracking; so give you a handle on incline, decline and other factors that can impede or progress your exercise and workout results. 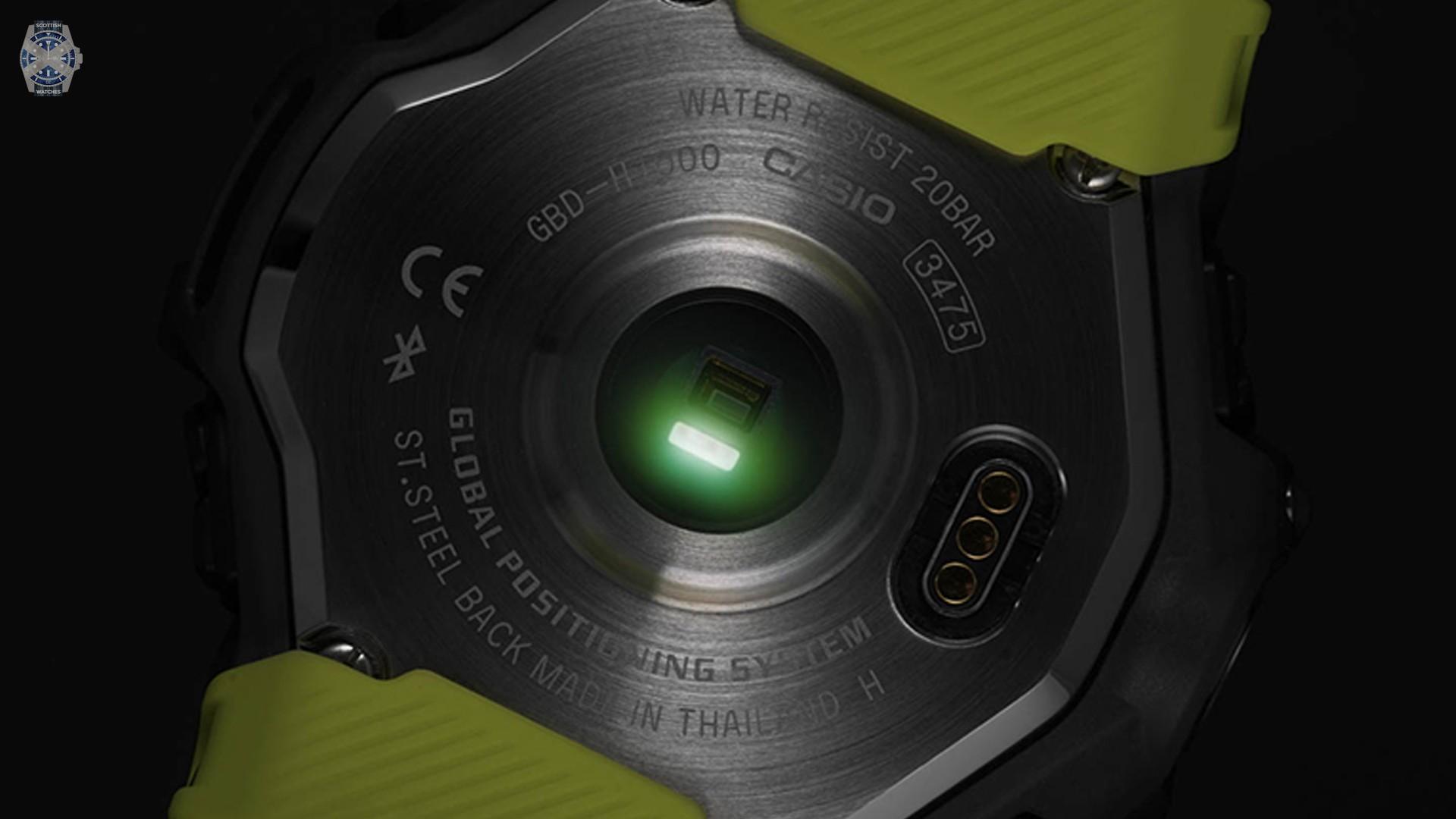 The watch functions best when its moving as much as you are, so outdoor activities such as cycling, running and jogging will be best suited to the sensor data it can acquire and you can program different workouts which you can pick and choose from. At this time this works out well as when taken indoors and used on a static bike or rowing machine you lose all the distance related calculations and are instead limited to heartrate over time, where the watch doesn’t have the required data to calculate accurate calorie burn or VO2 max.

Although you’d not expect it the H1000 comes with solar assistance. That was something we weren’t 100% sure on with the review unit provided as it didn’t come with retail packaging, but there is a solar cell ring around the outer circumference of the display that assists in keeping the watch powered and the figures state that in normal non fitness modes it will run for a year; over 60 hours with heart rate monitoring and so on but with the solar cell doing its magic this number stretched out quite some distance. Compared to an Apple watch where you need to remember to charge it or be disappointed in the morning, the H1000 really keeps powering forward so with intense use you may find the need to charge it once or twice a week and even then for only a couple of hours, another plus point. 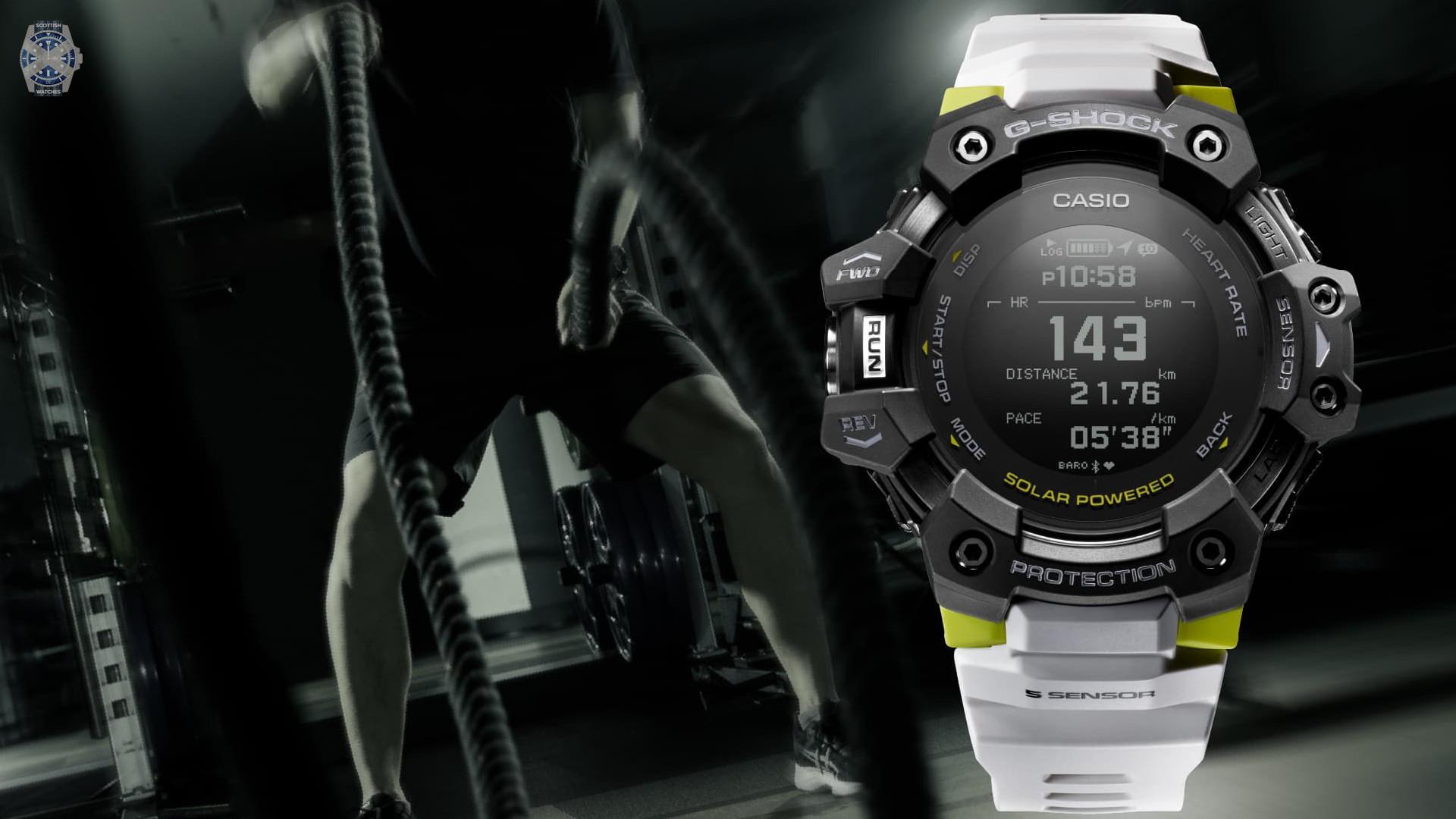 One of the reasons for the delay in launch other than the human malware we all know about is because Casio wanted to make sure their companion app was fully tried and tested for use. We got to trial the iOS version and on my aging iPhone 8 Plus it performed perfectly. With a range of different Casio and G-SHOCK apps to choose from via the App Store you’ll want to pick the MOVE app and none of the others on offer or you will be scratching your head wondering why things aren’t connecting. 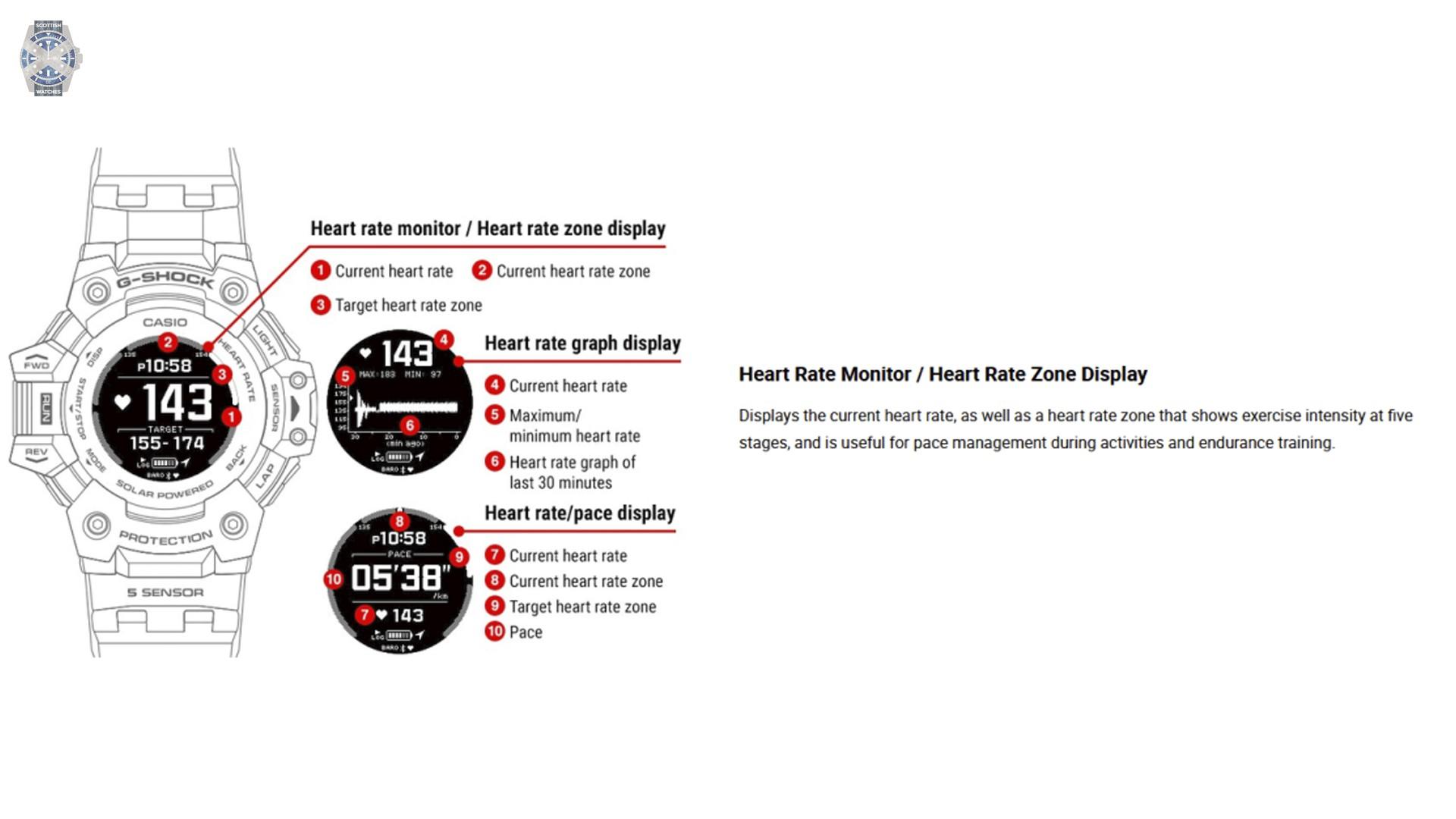 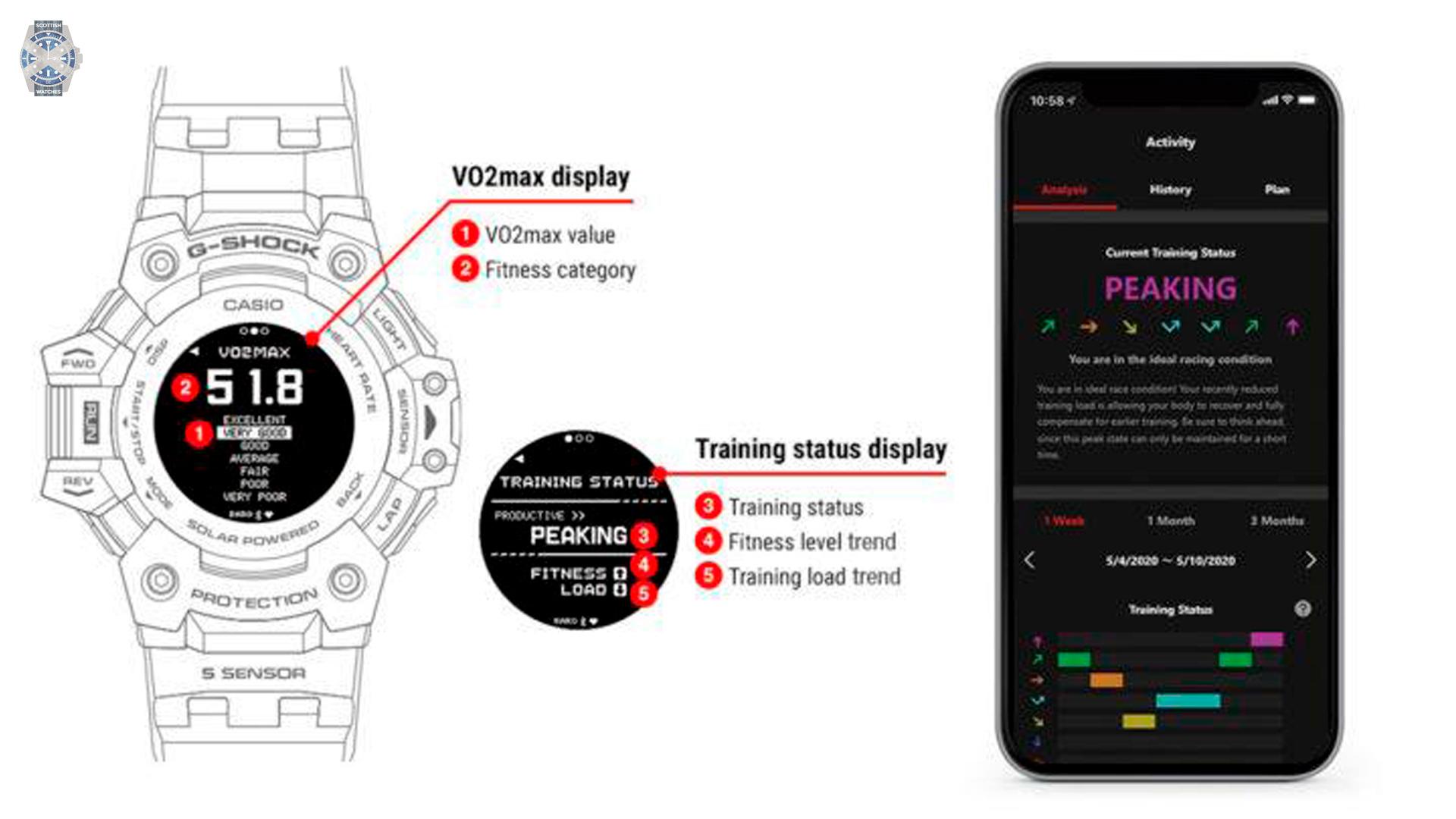 Installed and primed, the MOVE app offers a ton of options to fine tune what you want to do with your daily activities and you can create different plans, chart your progress and get all the numbers that fitness folks love to salivate over plus you get all the usual smart watch features of notifications, alarms and ability to read (though not reply of course) to incoming messages from other apps. 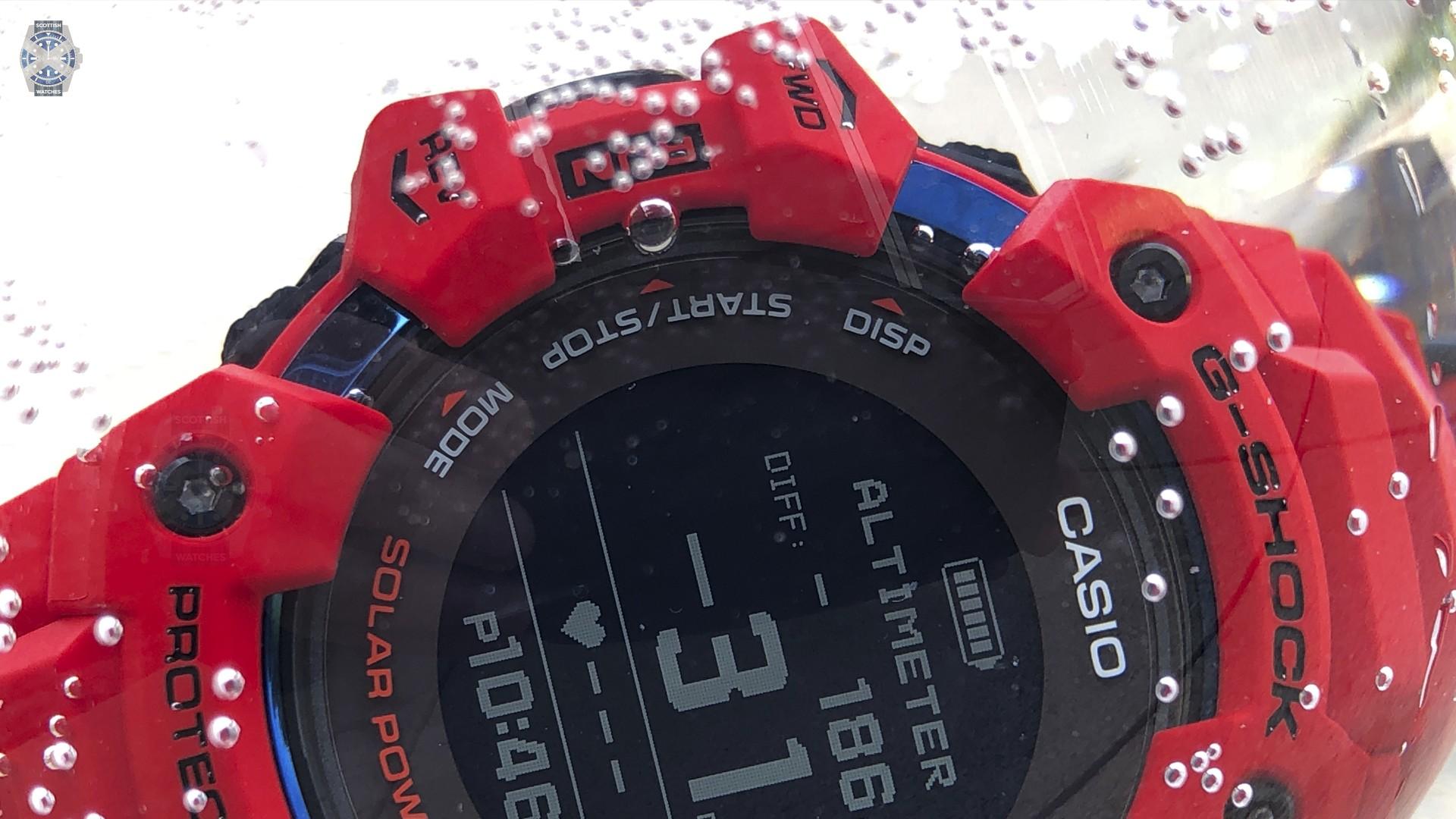 Speaking with the guys at Casio UK we’ve been told that there will be an online portal for cross conversion of data so if you have existing workout stats from another brand of fitness tracker there will be the option coming soon to import this into the MOVE app and continue from there forward. They are also working hard on adding new functions, features and bug fixes as things progress too so always keep an eye out for updates so you are running the latest version and therefore getting all the latest benefits.

We like it. We love G-SHOCK’s and have a large number in our collection because over the past near on 40 years Casio have developed and refined a product that works under pressure in all scenarios. That’s the reason police and armed forces across the world rely on their products. So bringing that clout to the fitness market where there’s more chance of a watch taking a bump, scrape or blow means you’re not going to end up with a broken device or cracked screen – something the competition are far more susceptible to. 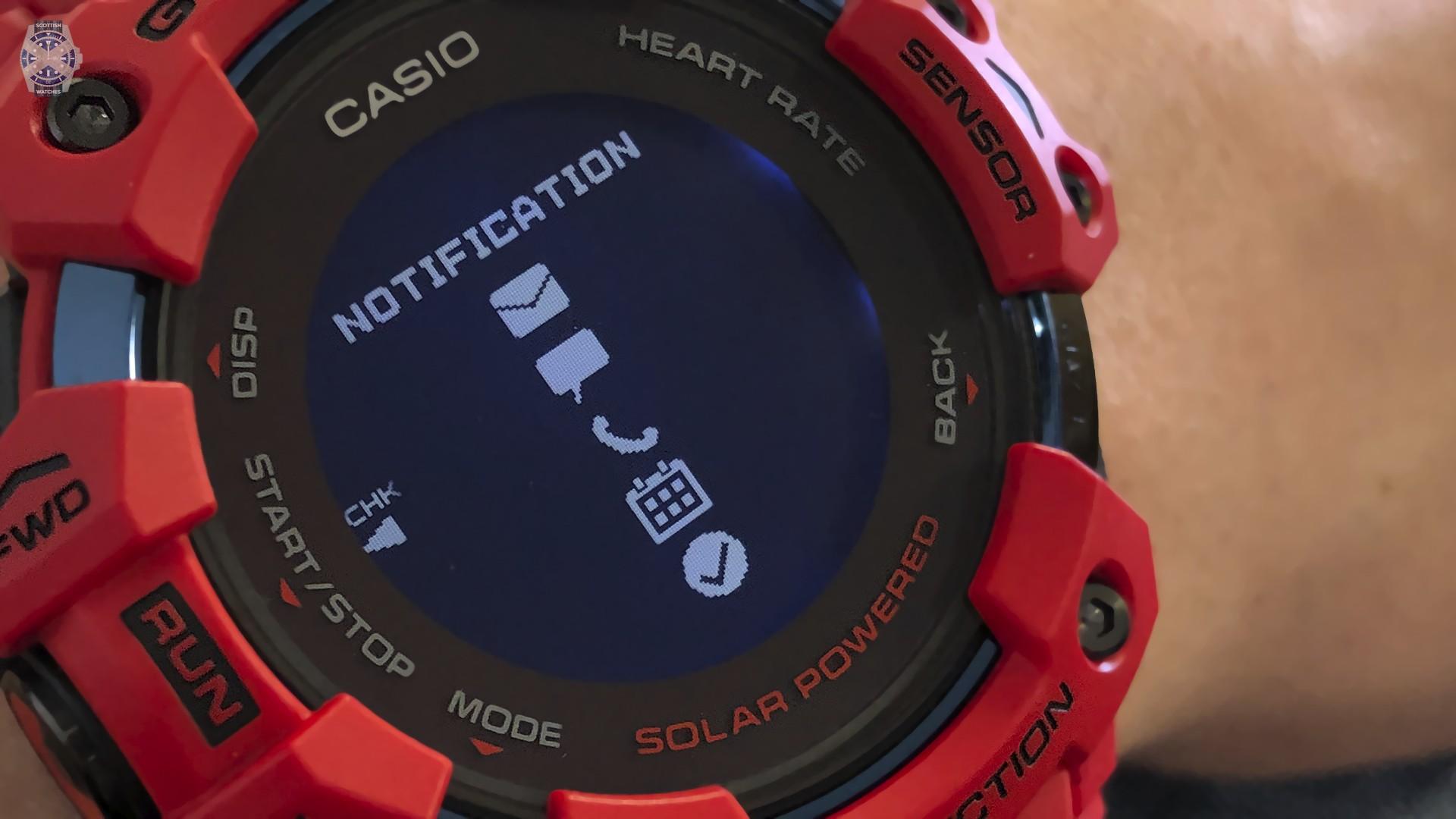 If you don’t mind the heft and colourways of design and are more of a moving around than static fitness person then definitely check it out. 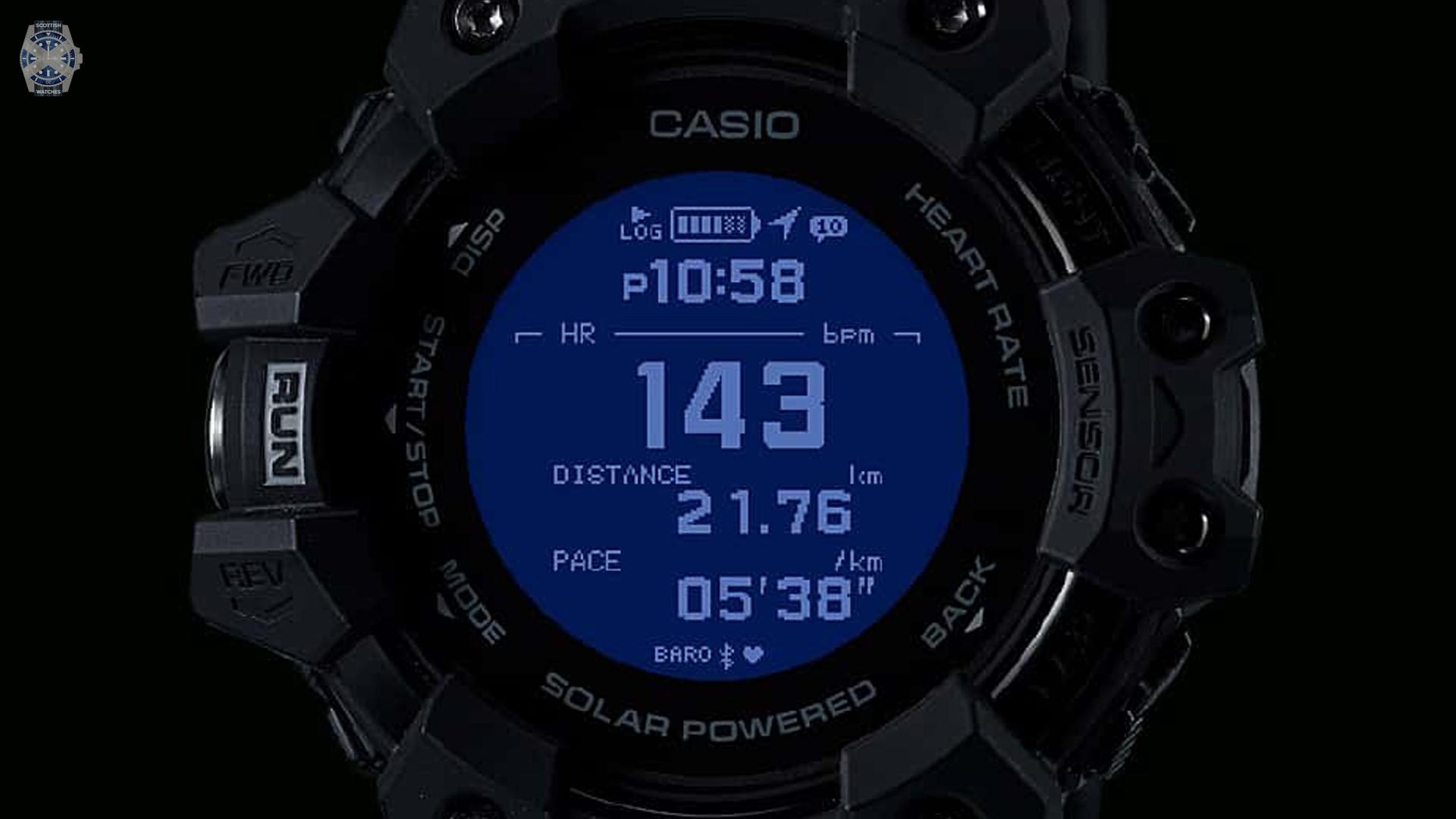