I’m not a great fan of homages. That’s not to say I have a problem with the concept, or even with the how the ‘H’ word gets used and abused. I’ve even owned a few before I fully appreciated which watches were actually being homaged and to what degree. Nevertheless, the debate around what constitutes a homage and what is simply a copy is never likely to reach a conclusion, but I simply don’t care enough to take sides. I just prefer my watches to be fresh in design or even a little quirky. 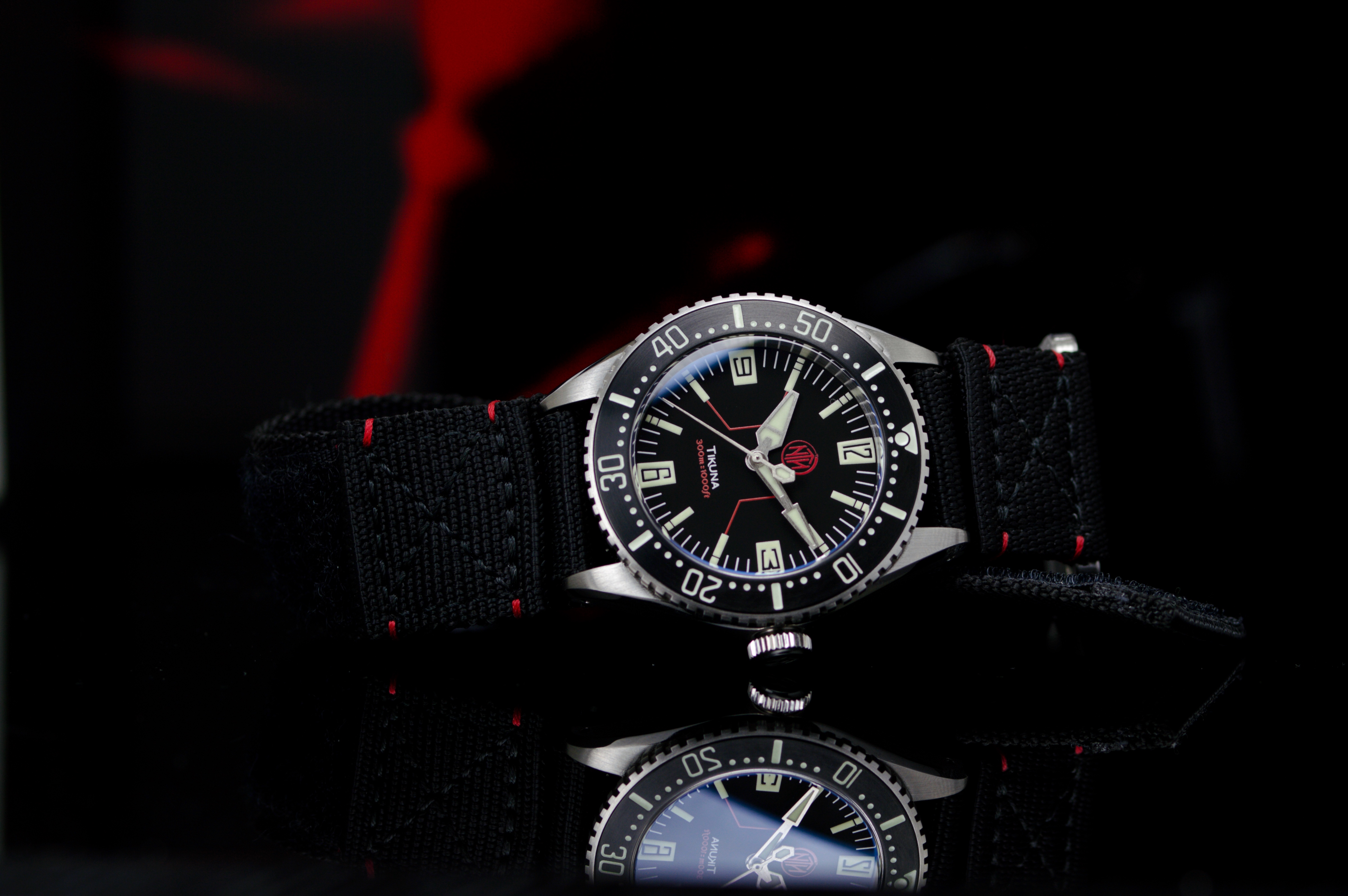 That all said…I’ve always kept a keen eye on the microbrand scene. It’s where I cut my teeth in the watch world and enjoyed seeing both small brands and individual watch designs grow and evolve. I have to accept that when it comes to microbrand dive watches there is often a heavy reliance on design cues from more famous or illustrious makers. Fresh, original and cohesive designs certainly exist, but they aren’t as plentiful as I would like and often aren’t as commercially successful. People want what they want, and there is a very real corner of the market dedicated to historically influenced dive watches.

NTH watches have been a major player in that area for a couple of years now. I wouldn’t go so far as to call the debut of their 11.5mm thick 300m diver a “game-changer”, but that thickness, or rather thinness, did revise the standard a little. Despite handling a few examples over the years I’ve been fairly unmoved by the aesthetics of any one particular model in the evolving ‘Subs’ series from NTH. Most models have either felt a little too unadventurous for my own personal tastes or show their inspiration from other references a little too overtly. Enter Tikuna. 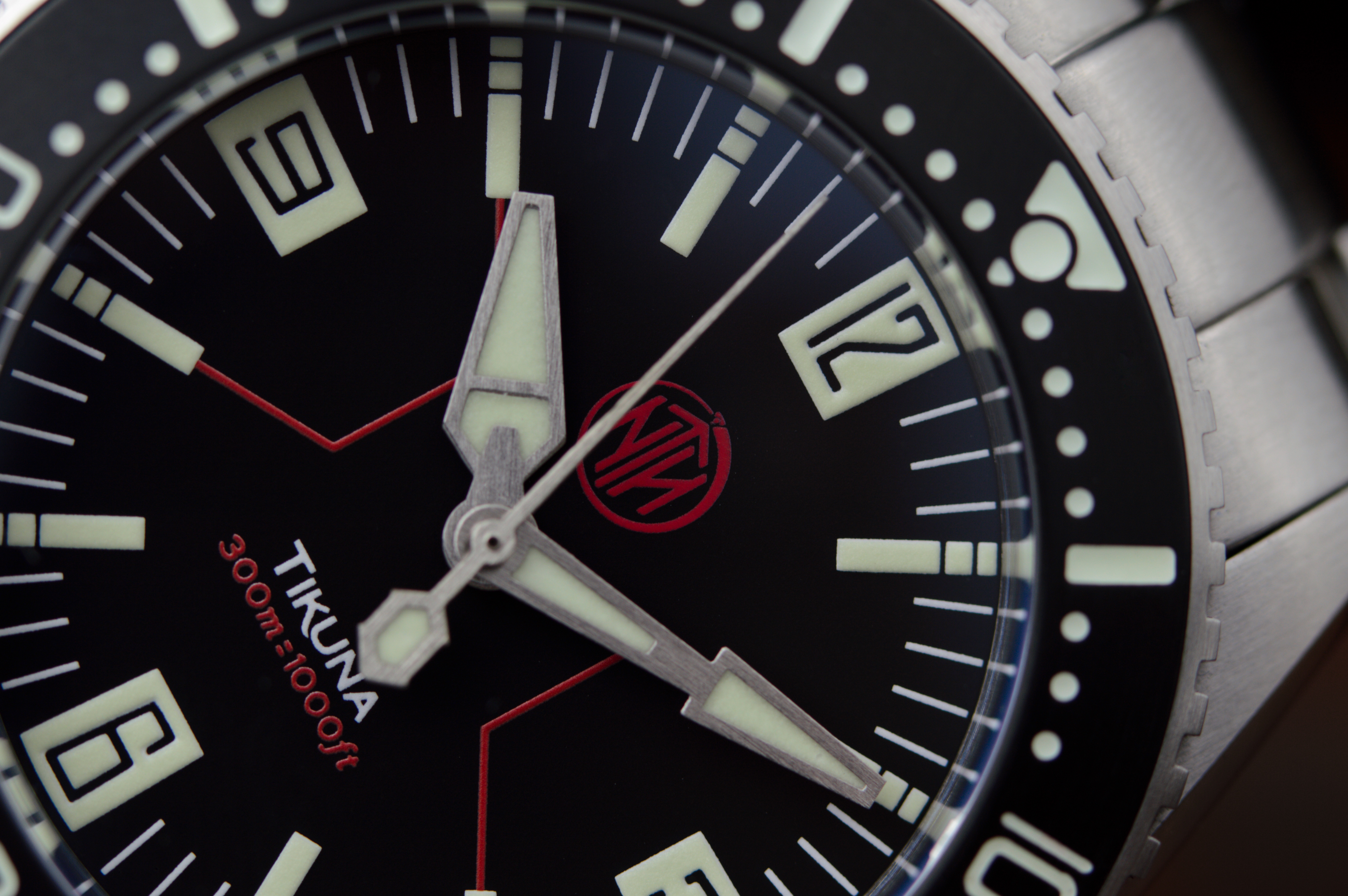 I was aware some new models were on their way but the new NTH Tikuna caused a quick double-take. My attention grabbed by a pretty distinctive design without an obvious direct reference to another watch also accompanying it. The Tikuna undoubtedly draws influence from a number of other dive watches, and that’s hardly surprising. The case and internals are shared with a growing number of other NTH models in a series that began with some more directly derivate designs, but the Tikuna appears to stand on its own in a fresher and funkier way. 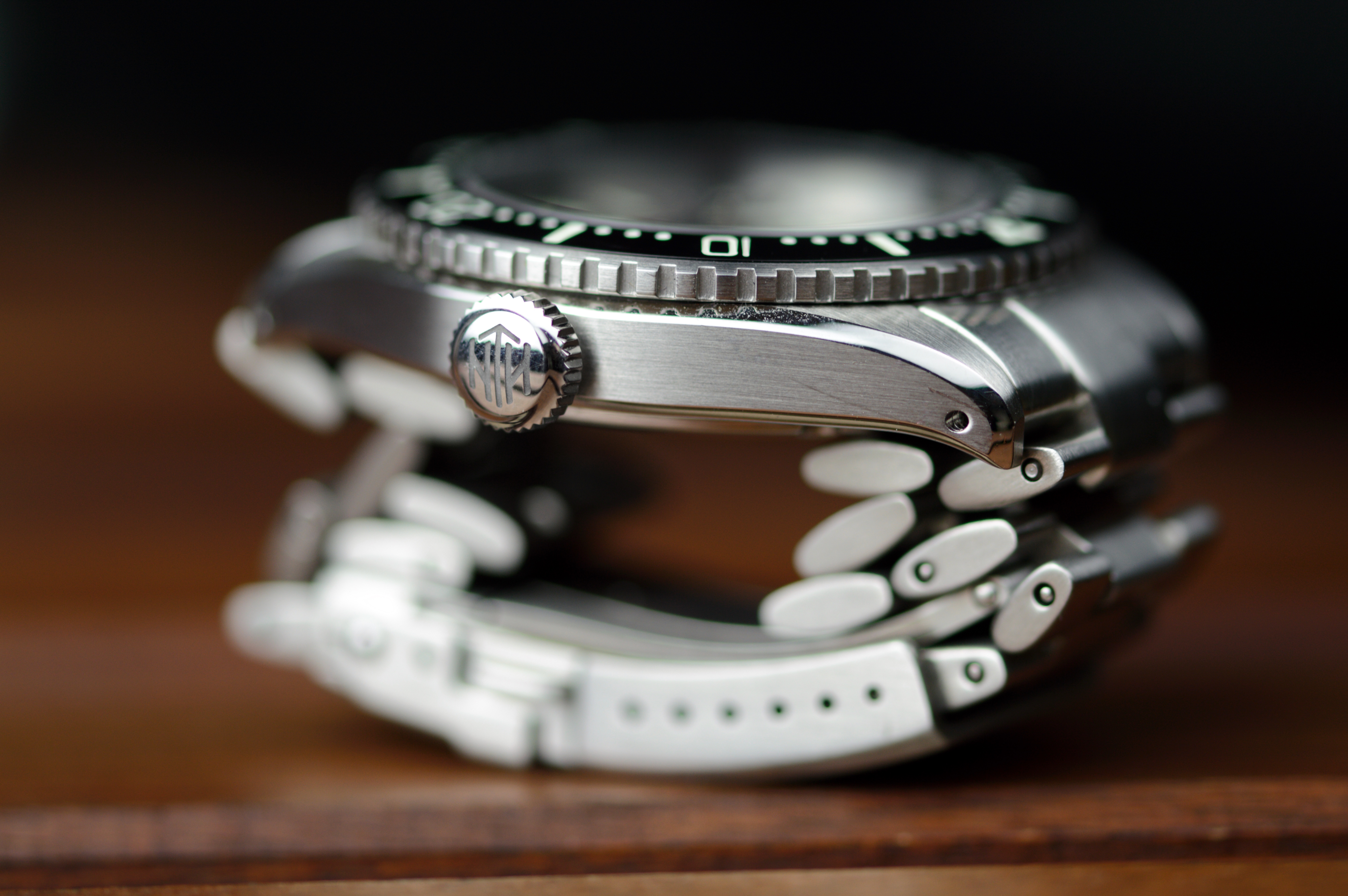 At 40mm in diameter and stretching out 48mm from the tip of one set of lugs to the other, the case sits well on my 7-inch wrist. The slightly smaller dimensions are in keeping with the 1960s and ‘70s diver influence that runs through the NTH ‘Subs’ series, but it’s more important to me that it’s right in my own sweet spot as far as watch size goes. Objectively, it’s the thickness of 11.5mm which is most worthy of note though. I have a couple of dive watches that are 12mm or under, and they do feel so much better on the wrist than a chunky watch that’s actually only 2 or 3mm thicker. While slimness alone isn’t everything, it is a figure that contributes significantly to how this watch wears on the wrist.

Finishing is pretty good, combining brushed and polished areas of the stainless steel case with crisp transitions between. I don’t know the intentions of the chamfered edges that narrow towards the tug tips, but to my eye they appear to stretch out the profile of the case, possibly enhancing the perceived thinness further. The bezel also narrows down a little towards its edge but remains pretty easy to operate. The movement of the 120-click bezel feels precise with almost zero play. 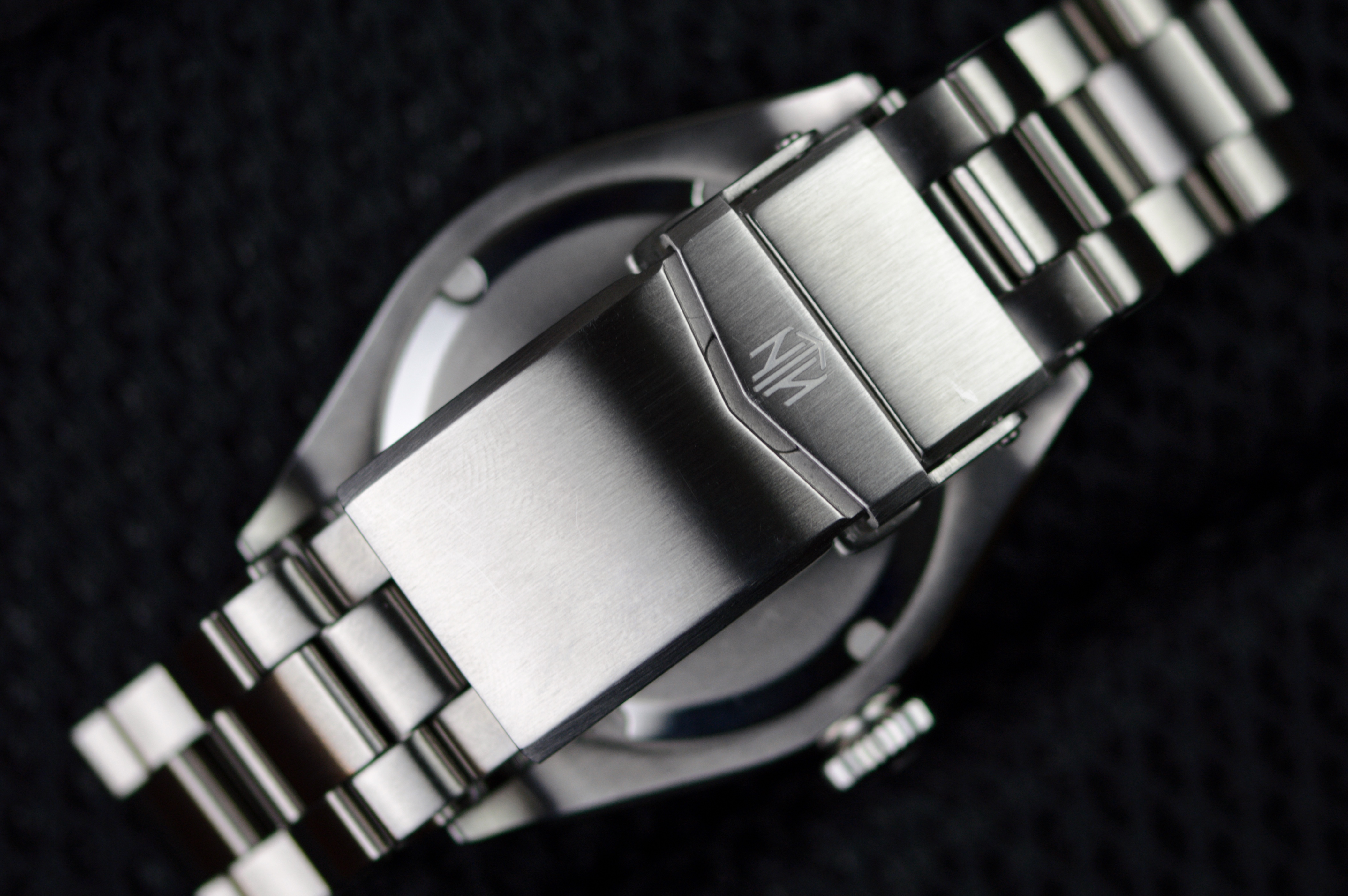 The Tikuna comes on an Oyster style bracelet and complements the watch well, continuing the light brushing across all three links. Upon laying the watch down I was surprised to see the full extent of the articulation of the bracelet – each link folding fully on top of the last. Of course, that means very little off the wrist but gives a good indication that this should be very adaptable for any wrist shape, and it has certainly been comfortable on mine. The 20mm lug width tapers down to 18mm at the clasp, which is functional without being exceptional. A flip-lock and two-button action keeps the clasp secure, but there is no divers extension present. It’s not a problem for my own lifestyle, but it’s worthy of mention on a 300m dive watch for those who are likely to put that aspect of it to the test. 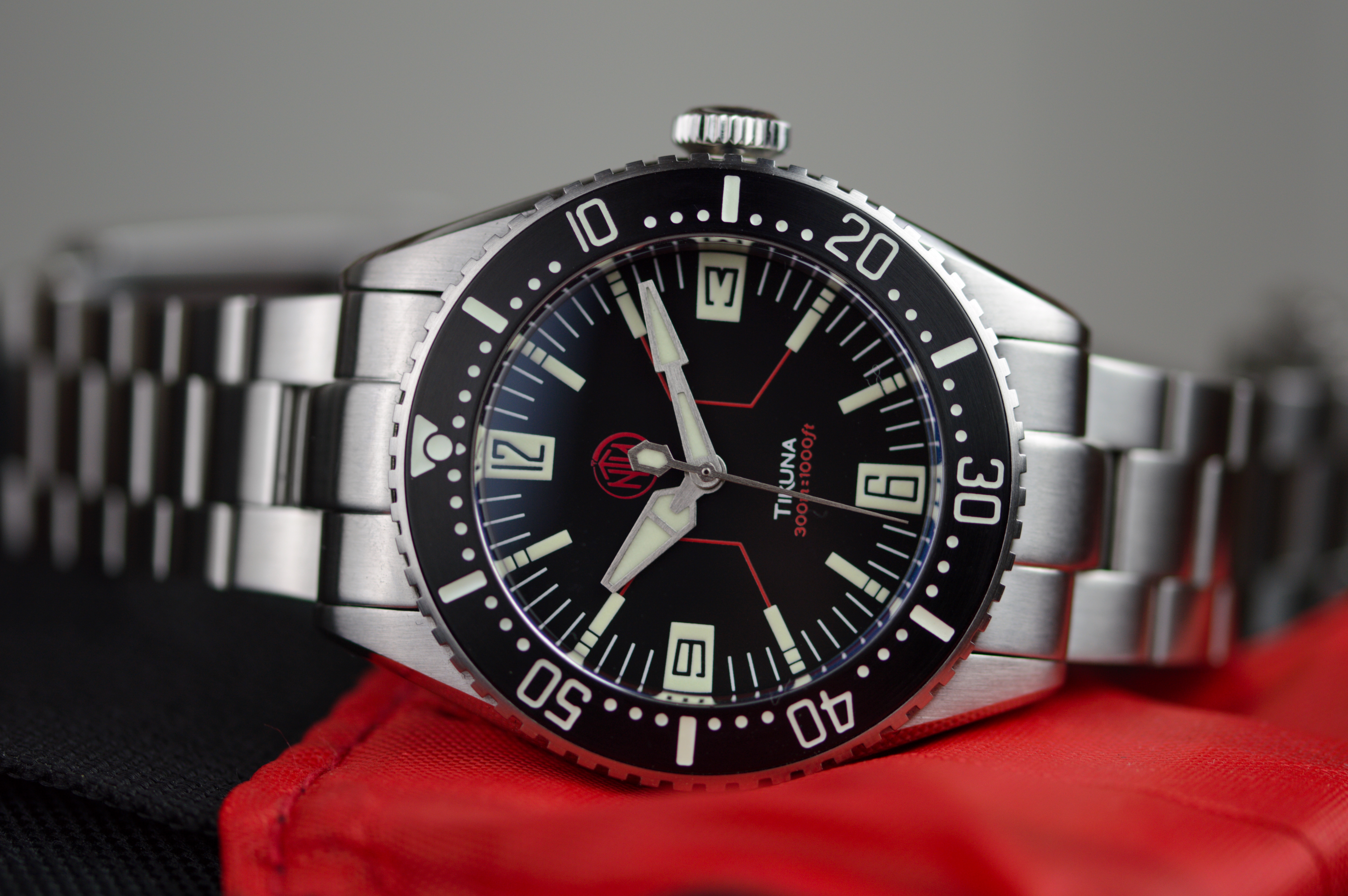 Basic size and construction aside, the dial is where I find the Tikuna shines. The stylised Arabic numerals and surrounding lume appear directly influenced by the Oris Diver Sixty-Five, but the similarities don’t continue much further than that. The large hands are unconventionally shaped, but broadly in keeping with the indices. Even the lumed counterweight on the tail end of the seconds hand feels as though it’s straight out of the 1970s (think the hallway carpet from The Shining’s Overlook Hotel). That hexagon shape echoes through to the red lines on the dial connecting the sets of indices at two and four, eight and ten. 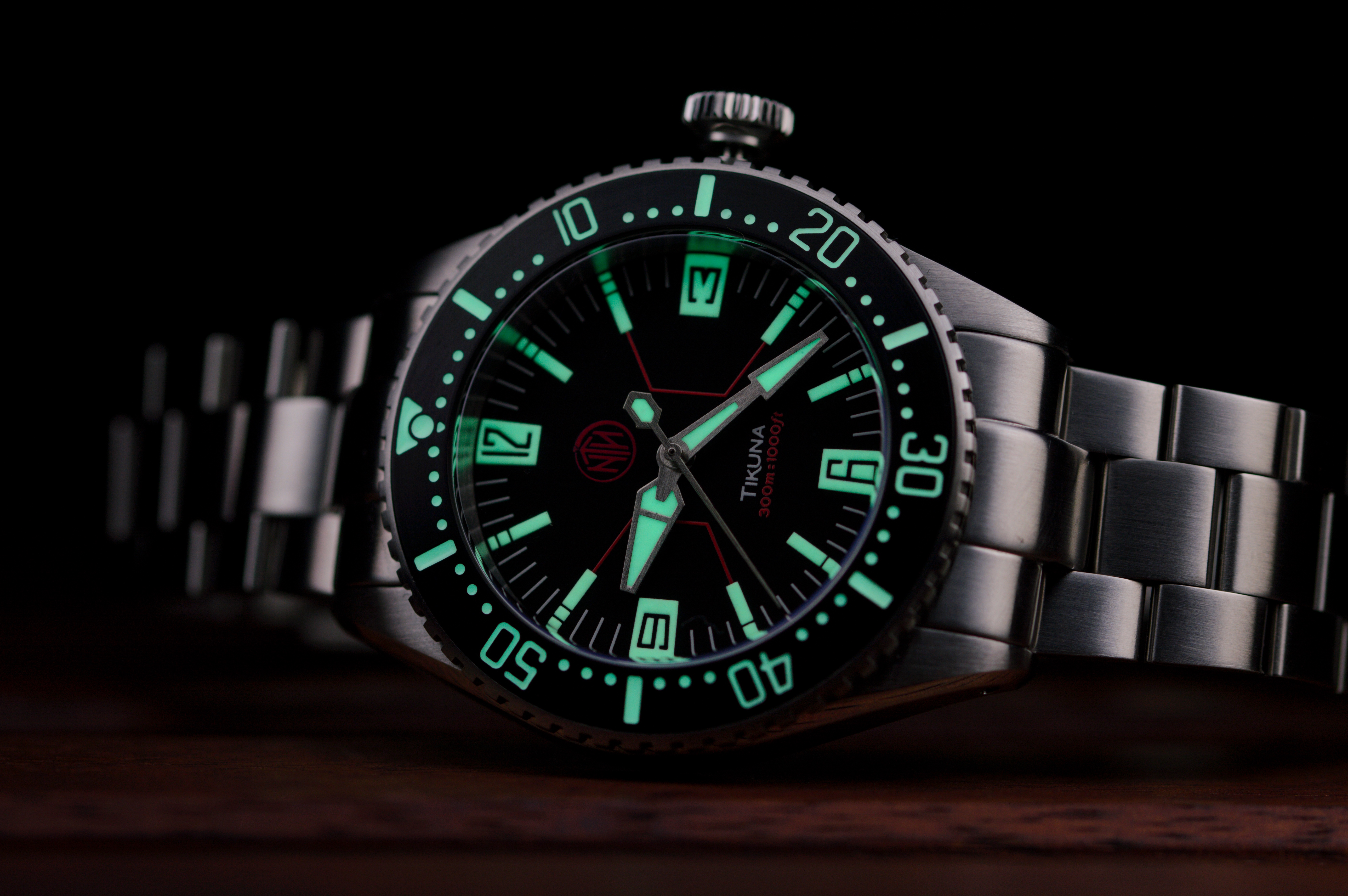 Owing chiefly to the large hands the legibility is good during daytime hours, and generous helpings of SuperLuminova give excellent low-light readability. Even the crown has a little glow to it too. That’s a fun touch, but one I could happily live without and I expect could generate a stronger reaction in many, be it positive or negative. I can’t see any specific watch being clearly homaged in this way, which is a good thing, but these attributes all give rise to vague recollections of 1960s and ‘70s skin-divers which often had more decorative markings on the dial. Many of those brands have since faded away, as has the slightly more playful design language in operation.

Ticking away inside the Tikuna is the Miyota 90s5. This is in the same family as Miyota’s popular 9015 automatic movements (42 hours of power reserve and beating at 28,800 bph). The advantages of having a true no-date movement in the version seen here in this review are that there is no “phantom” crown position where you would normally find the date set, and there is no tick over as the date wheel snaps to the next day behind the scenes. Small touches, but ones which could make ownership more appealing. 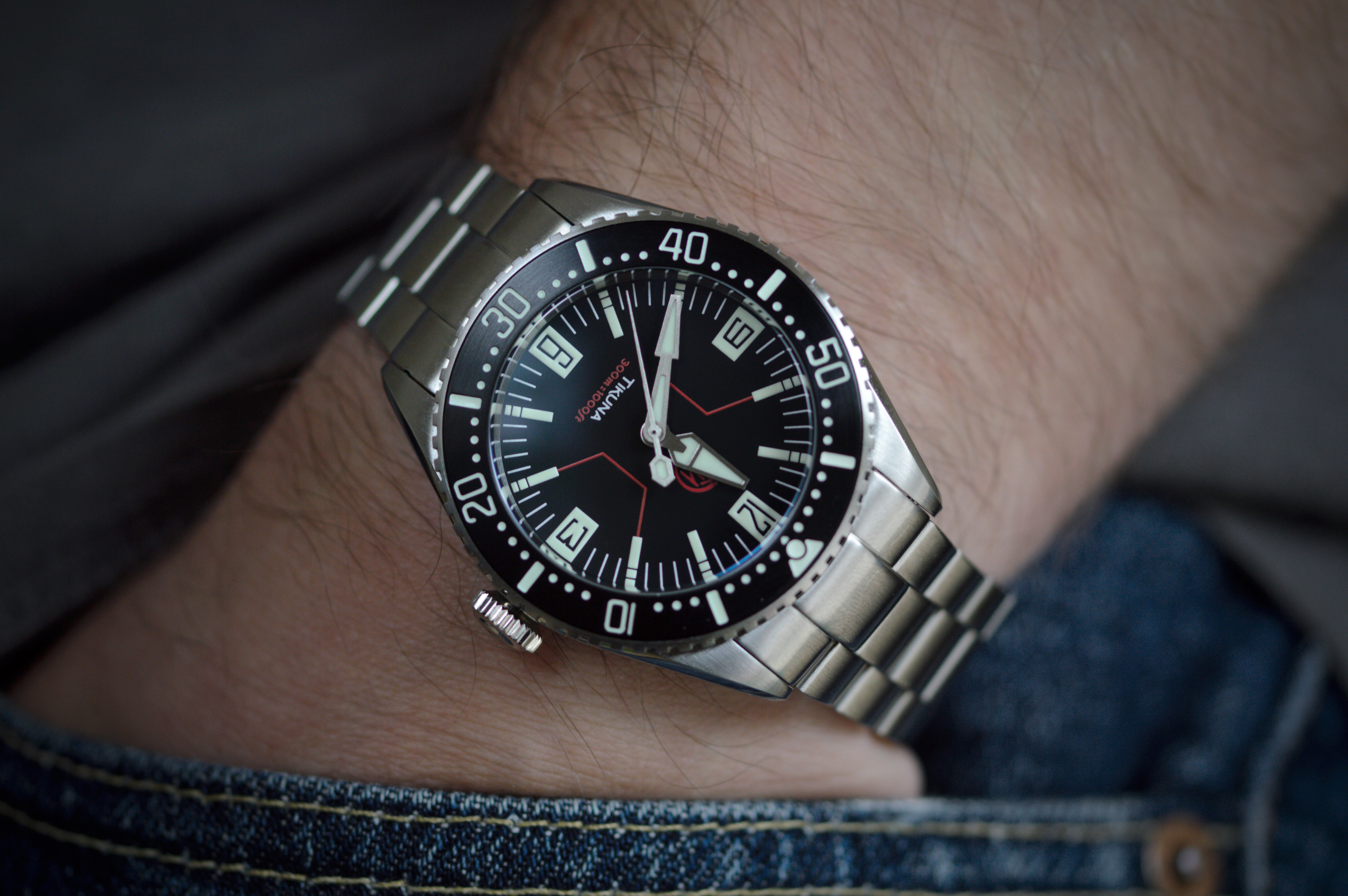 I’ve already mentioned the comfort that the case and bracelet offer, and I would probably wear it this way 90% of the time. Like many, I switch out straps and bracelets more for my own amusement than to fit in with a particular activity or dress code. The combination of a 20mm lug width and predominantly black dial and bezel give rise to plenty of strap options. Nato style single pass straps look especially good and also bring the watch down a little in terms of how it wears on the wrist. While the additional fabric sitting between the watch and the skin is going to increase the bulk a little, a thin strap shortens the appearance of the lug to lug length; partly due to the center portion of the bracelet’s first link extending outwards a little further than the lugs themselves. Switching out straps is made easier by the drilled lugs.

NTH have been growing in reputation throughout the lifetime of their ‘Subs’ diver series, and the Tikuna is a watch that, in my opinion, helps push the brand away from the generic homage microbrand scene and towards solid and well-designed offerings in their own right. Although the $650 asking price isn’t chump change considering the plethora of small-run dive watches out there using Miyota movements and Asian made cases, the NTH Tikuna is likely to be amongst the best made of those options. If you like the styling it’s tough to argue that it’s not decent value.