When you can leverage more than a century of production you don’t have to whip out fauxtina and pretend vintage; you have it in your bones. The Oris Chronoris Movember Edition is just one example of this, a 1970s-era, racing-inspired watch, with a twist. 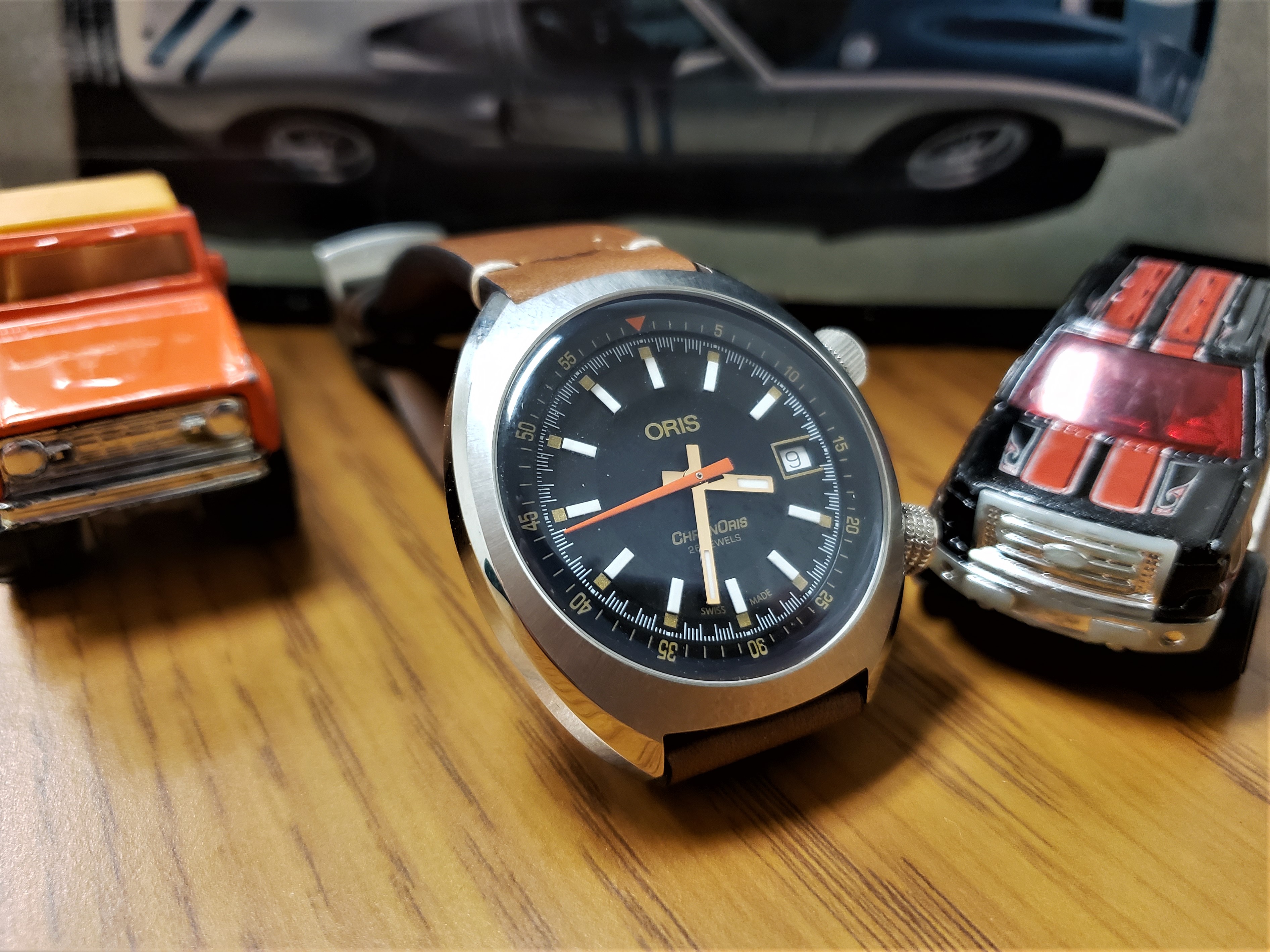 The twist of course is the opportunity to raise awareness of men’s mental and physical health issues through support of the Movember Foundation.

But I’m not going to suggest you buy this watch just to support a charity (though there’s nothing wrong with that!). I think this edition has more the looks and detail, taking the right turn from the rest of the Chronoris line to a more dressy place.

The standard Chronoris line includes chronographs and date versions. The date versions have red-orange contrast colors with either black or black & grey dials. It’s high contrast in a subdued way; this is Oris after all, not Zodiac. But the degree of detail and contrast, the tonneau case with cut out lugs, a minute tracker that’s so detailed Mr. Magoo could read it, and internal rotating timing bezel all reflect its 70s roots. (Note: It looks like the new H. Moser & Cie flyback chrono has kicked the minute track even further up a notch.) 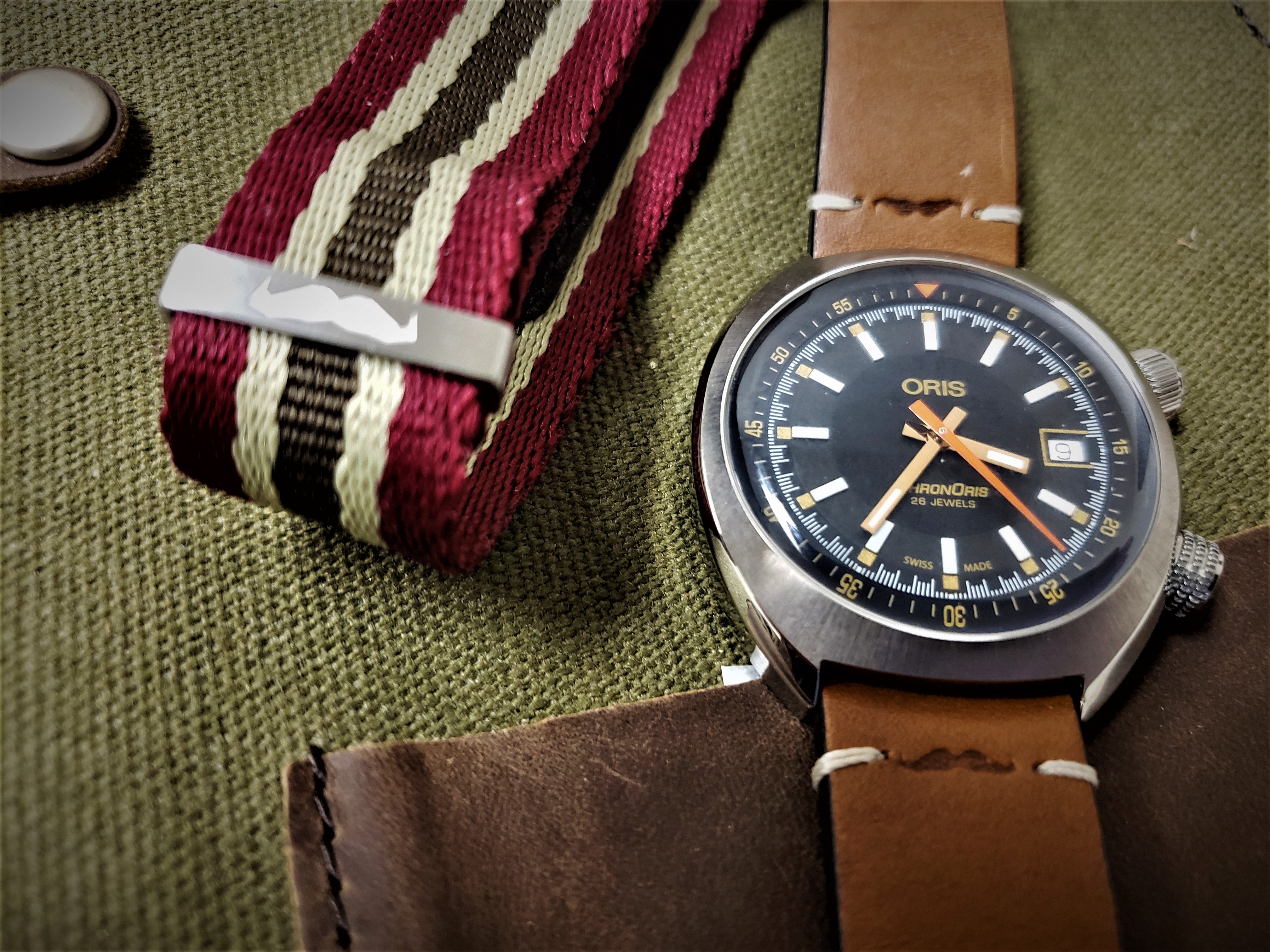 The Movember Edition of the Chronoris is more restrained. The red-orange at the end of the indices is replaced by a more subtle antique gold, which matches the rest of the writing on the dial and the internal rotating bezel as well as a three-sided date frame. The hands too are rose gold-tone with SuperLuminova toward the ends instead of all white, and they shine like a new penny when the light hits them right.

The tapered wedge second hand is orange as is the triangle at the 12 position on the bezel, the only bright colors on the dial. The white SuperLuminova indices have a little thickness compared to the orange squares at their ends and sit on a black band. It’s a subtle 3D detail you don’t get from a straight on shot of the watch.

The case features a brushed top with polished chamfered edge and sides. One caution, and this speaks to my ignorance, with this case shape and cut out lugs it is very easy to scratch the back of the watch, which identifies the watch as a special edition and includes the Oris badge and the Movember mustache logo. 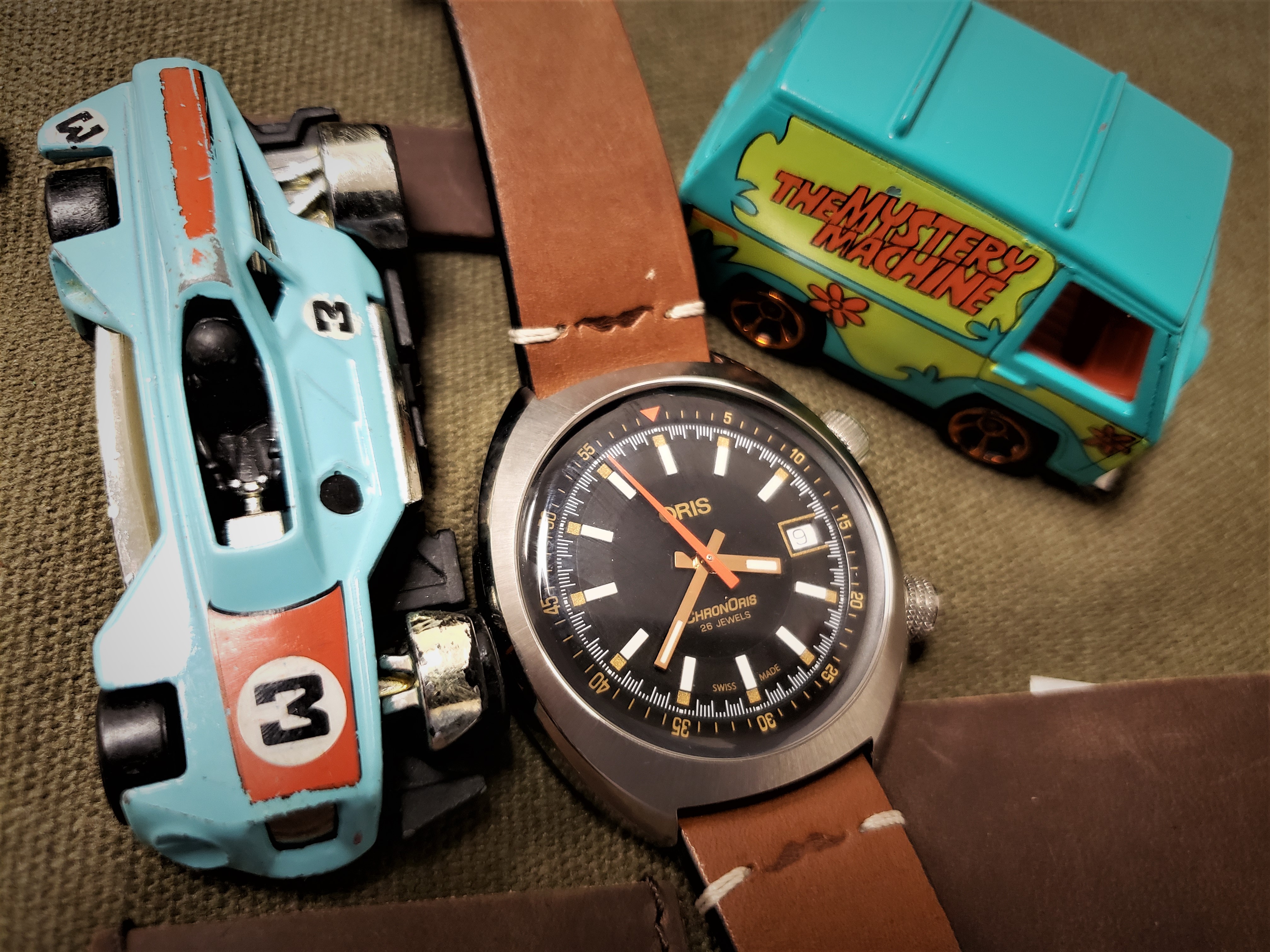 The special edition includes Movember branded straps. The leather, quick release strap has the Movember mustache logo on both ends, up near the case. It also comes with a striped fabric NATO strap that has the Movember logo on a buckle ring. The watch can also be ordered in a bracelet (which also comes with the NATO, but not the leather, and what fun would that be?). The NATO is very soft and comfortable, but my personal experience was that this type of case tended to slide around on my wrist, so I prefer the leather.

In addition to making a 6-figure USD donation to the foundation, Oris held events around the world to help increase awareness of the Movember cause, including Japan, China, the UK, and Germany. In the U.S., they engaged New York Yankees’ Manager Aaron Boone in Movember support. They also brought a member of the foundation to Holstein to raise awareness of men’s health issues with staff, and they held a raffle at their office with the proceeds going to the foundation. 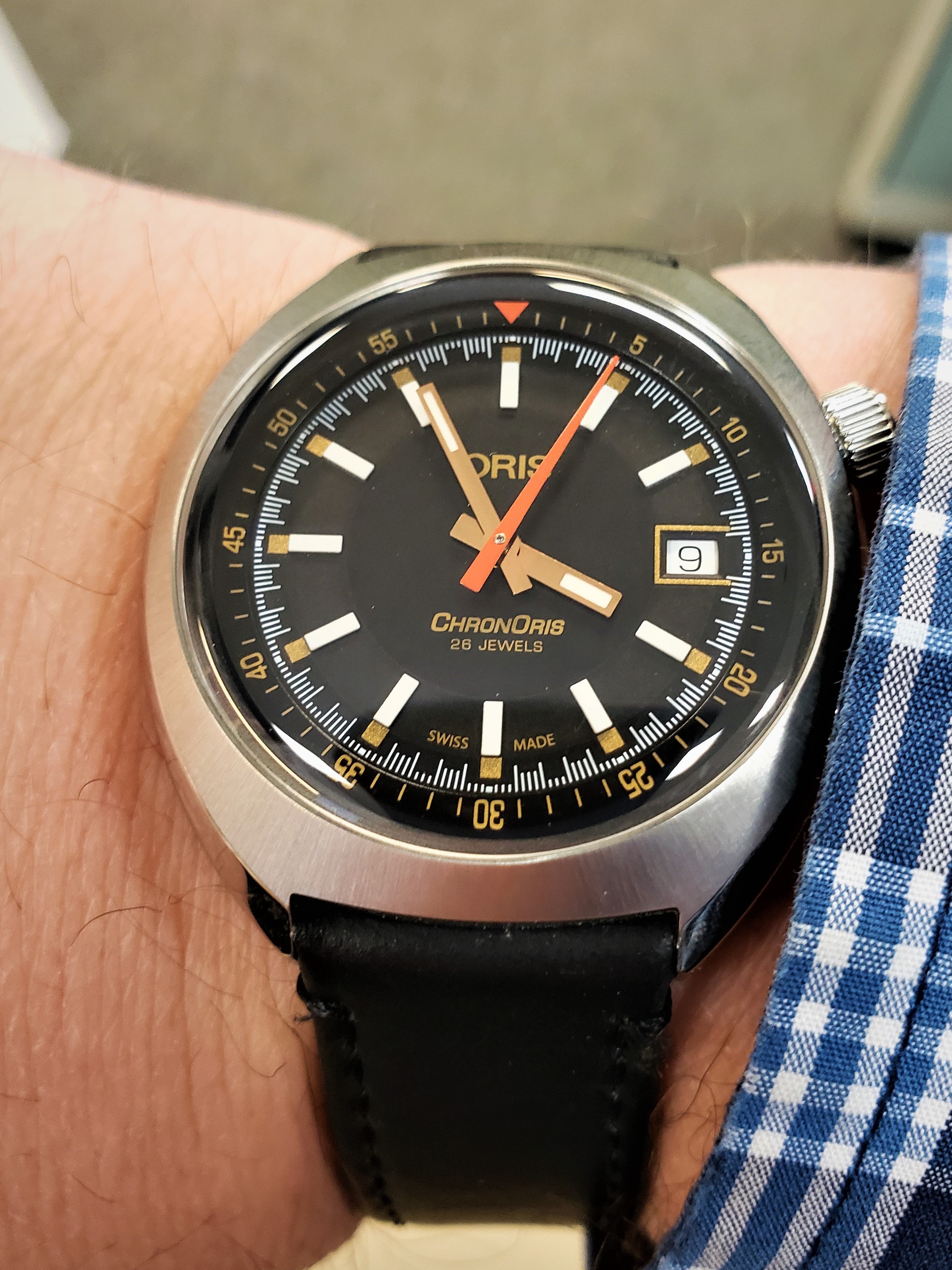 “We look at these things from a holistic perspective. They must make sense for our brand, and we must believe in the message and therefore also fully support it with all channels and tools we have,” said an Oris representative.

The styling of this Movember Oris is restrained and classic, compared with the rest of the Chronoris line, and that appealed to me personally. Lately I’ve been wearing it on a black leather strap. and I would comfortably wear it with a dark suit to a business meeting. With it’s racing roots and timing bezel, it’s also a fine casual watch as well, though with a serious touch. Throw in the chance to support a worthy cause, and I’m hooked. $2,000 USD on leather, $2,200 USD on the bracelet. For more information on this watch, visit Oris on the web. 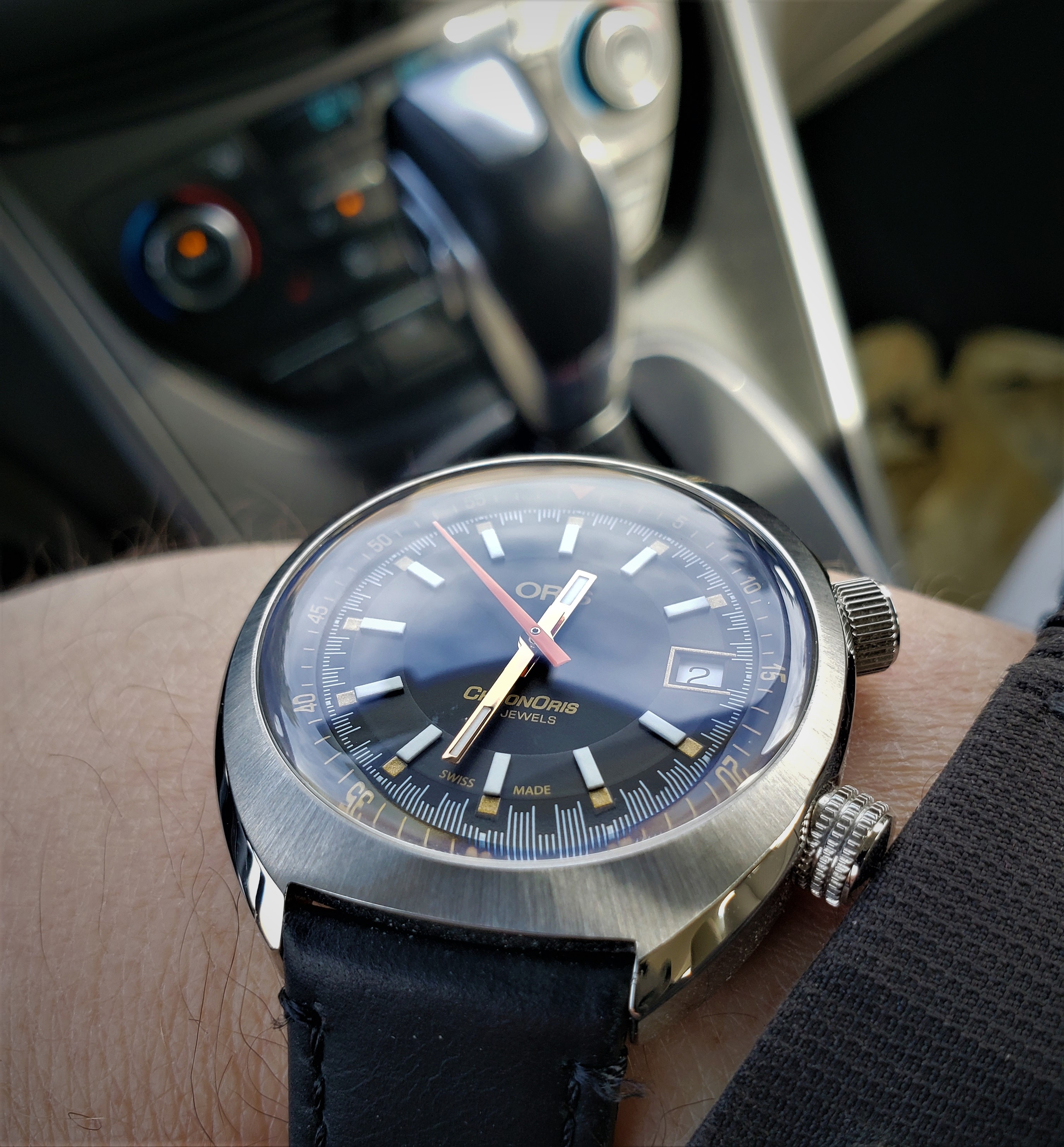