From the Editor: Last night Bremont released their latest limited edition for the run to Christmas. I posted some images from the new watch line, the H-4, and invited comment and after several comments on IG invited anyone who wanted to, to pen a quick few words for the website on their initial reflections. We got more than one and it appears more are on the way, such has been the reaction to this watch line release, so I thought I would try a format that puts the articles in the same space, so here goes. 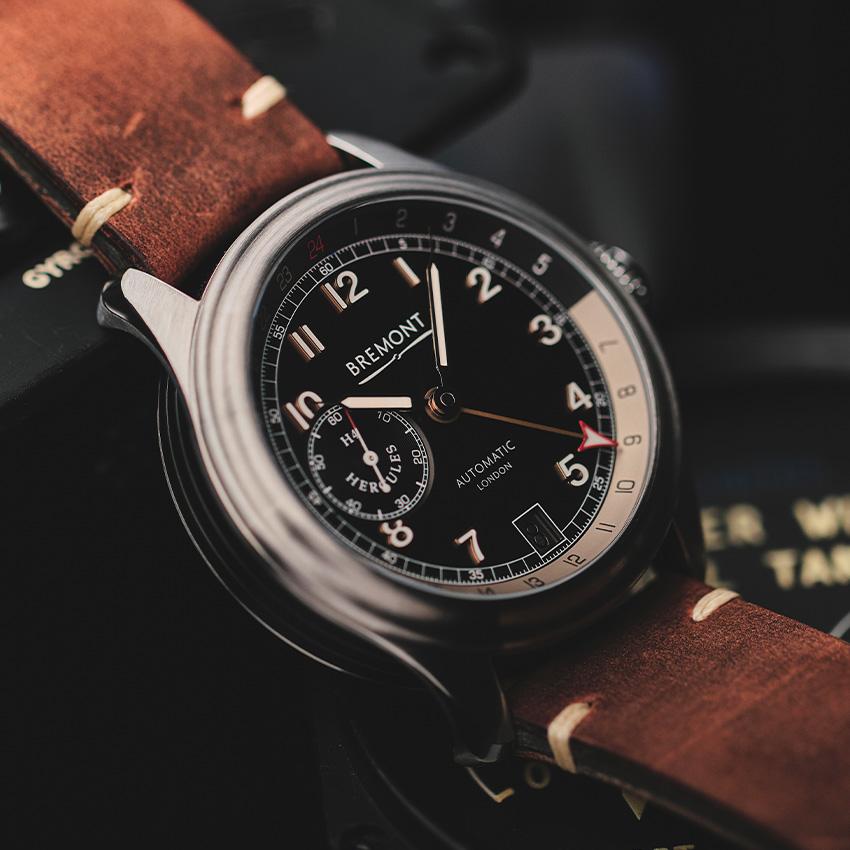 For the past year, I have been getting a healthy amount of opinions fed upon me about the brothers’ English and their watch company, Bremont. The phrase over-priced has been heard more than once, others have called into question their legitimacy after the whole inhouse in movement debacle.

It sometimes would appear to be easier to find someone who can recommend bringing a knife to a gunfight than a review of a Bremont that does not touch on some of the above. Many simply just don’t like them.

But why? Why is Bremont dogged so much for what they offer? Why are they not given the courtesy of the benefit of the doubt? Why is everyone so harsh on them? Ladies and gentlemen, I give you the Bremont H-4 Hercules.

Bremont has made a living on crafting aviation-inspired pieces as well as pieces influenced and used by the modern military. This automatic GMT is no exception. It is a simple design that doesn’t bother with fuss and is easily legible.  The four hands all are easy to read, highly discernable, and well-selected. They don’t look dated or extremely futuristic. The sword selection works very well with the dial, and they are large enough to fit the entire dial. It may be because Carl Ruiz is on my mind, but the hands aren’t too small.

The GMT hand has an arrow tip at the end and is illuminated with a red border. It too does the job of reaching all the way to its desired track. Nothing seems to stand out about it. It doesn’t look out of place, and again, it’s easy to see. You add the date window at 6 o’clock and that’s all for features and complications. In case you were wondering, it’s 43mm across, 22mm lug width, and 14.4mm thick.

Overall, the dial of this watch is simple and great. It’s a really nice take on a GMT.

Then you turn it around and all hell breaks loose. The website stated that the propellers comprising the rotor are made from fuselage from the original Spruce Goose. That moniker is front and center on the rotor and the movement is clearly visible. The specs of this watch are pretty bland after that. A 100m water resistance rating, 50-hour power reserve, and dual-direction winding. The seconds don’t hack. The movement is an evolution of a movement they contracted from another company, but the specs are solid. The part that stands out most about this watch is covered up, so if you were hoping for a noticeably limited edition, you won’t find it here. 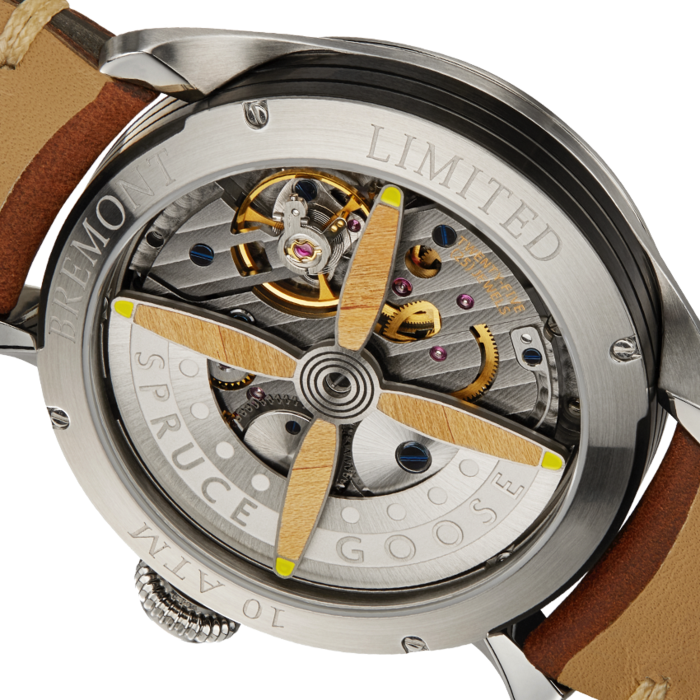 If you see this watch, not knowing the brand or specs outside of it being made out of stainless steel, how much would you expect to pay for this? $2,000? $4,500?

“Jumping the Shark” is an American term derived from the sitcom Happy Days. It refers to a time when viewership was waning and to give the ratings a boost, they had the Fonz jump a shark on a jet ski. For no real reason in the plot. It was an attempt to do something outrageous to get the attention of those not already paying attention to boost viewership. It didn’t work.

So while the design of this piece remains pretty unspectacular, the $11,534 price tag certainly adds jet fuel to that 1960s jet ski and turbocharges the engine with something Borg-Warner wouldn’t scoff at.

Yes, my fellow watch lovers. This watch, from a company that not too long ago was being called out for being at the very least fuzzy minded about their “in house” movements, is offering a four-hand GMT on a leather strap (and accompanying NATO) for $3,400 MORE than a Rolex Explorer II (216570). Retail. In steel.

Yes, it is hand made. Yes, it is one of 300 pieces. Yes, it has pieces of the most epic plane ever made in it. And yes, it is from Bremont.

I can understand wanting to be seen and recognized for what you offer. It’s hard to get people to look at new things; let alone new, shiny things when there are many shiner objects around. But for what it’s worth, this isn’t special enough to command the price.  Maybe what I’m missing is the feel of the piece and that if I wore it, I would see where that money goes. I would be able to feel the craftsmanship. In the end, this would seem to be the workings of someone desperately trying to get attention to avoid being canceled.

Now it is @grog_jd turn

Bremont has been making a name for themselves in the watch kingdom as of late. Folks who know way more than I seem to be divided on their opinion of Bremont. After all, Adrian (of Bark and Jack fame) had once poo-poo’ed the brand and now has gone to bat for them (sort of). Love them, hate them, whatever, there is no denying that Bremont is making an indelible mark on the watch world.

In this latest venture from Bremont, they are releasing the H-4 Hercules, a tribute to the airplane that was the brainchild/hobby/passion project of Howard Hughes. The H-4 was a behemoth of an aircraft that was also able to land in the water. It had earned the nickname of “The Spruce Goose”. To that end, Bremont is supposed to include a small amount of the Birchwood from the fuselage of this airplane in the watch itself (it appears to be incorporated into the rotor and can be seen through the case back). According to the Bremont website, a portion of the proceeds from this watch will go to the preservation of this aircraft.

Now, what do you get for that money? The H-4 sports a 12-hour dial with applied Arabic numerals, a small (non-hacking) seconds at the 9 o’clock location and a date window at 6. “Bremont” and “Automatic  London” are printed on the dial in contrast to the applied numerals. There is a classic sort of train track with small numerals at the 5s. A GMT hand is also part of this package with the rehaut/chapter ring being numbered for the GMT hand. If you opt for the stainless steel model, the dial will arrive in black, while the rose gold and platinum models will have a dark brown dial. This appears to be a well made, classy dial.  Very much styled as an Aviation watch that could have been made in the 1940s. I’m really digging the black dial. The brown, while it seems to be very well done, just doesn’t appeal to me. However, I’m just going off web photos. 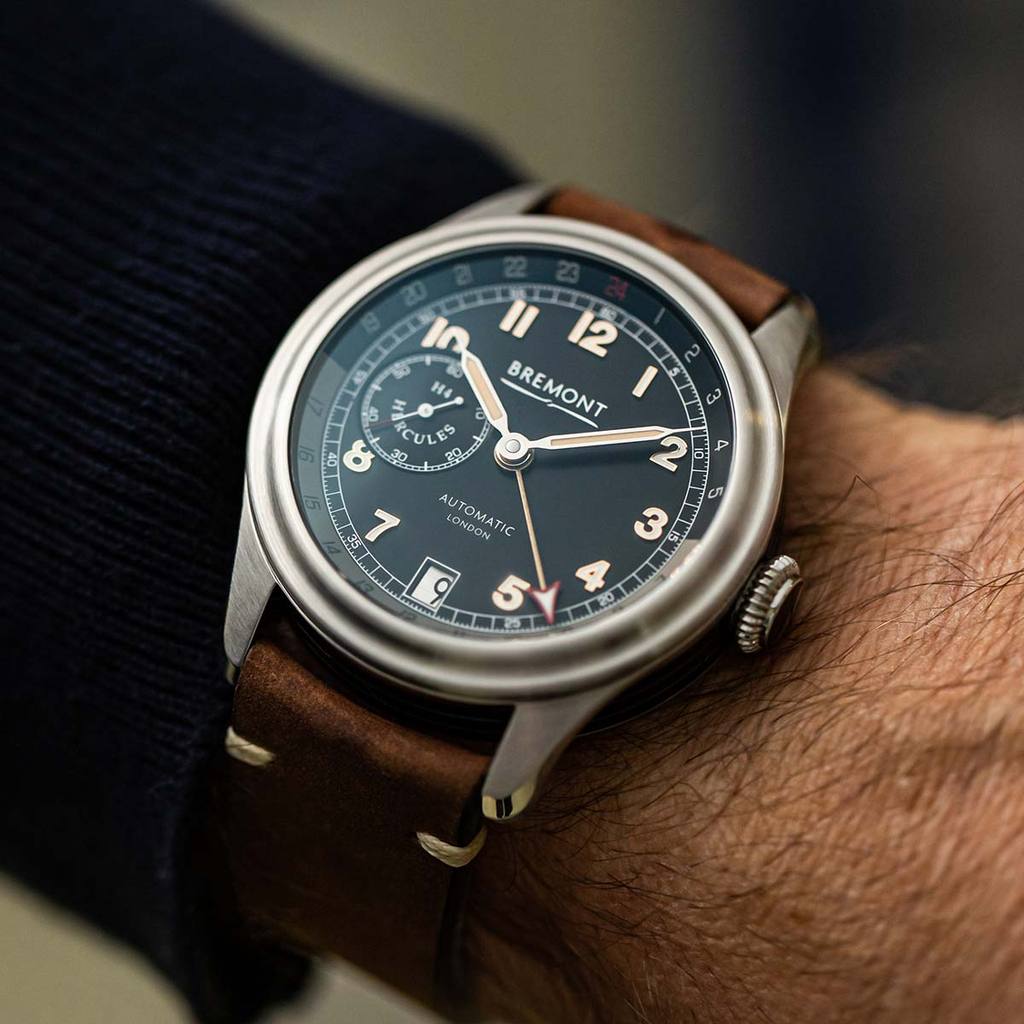 Flip it over and you first notice the rotor with the slivers of wood in a 4-bladed propeller style that are part of the rotor. This means that yes, this is an automatic and is built on Bremont’s 25 jewel BWC/02 movement. Very well (it appears) decorated, this should be something to impress your friends and family. At least until they get tired of you geeking out about your watch. I give the family/friends about 15 minutes (from personal experience). 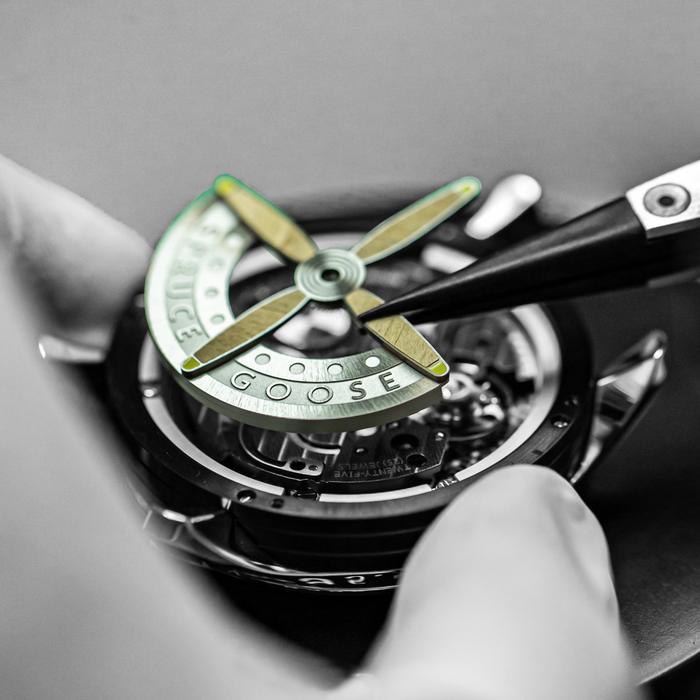 Bremont then takes this good looking GMT and stuffs it into a 43mm diameter case that is 14.5mm thick. There is a sapphire crystal front and back. It sports a 10 ATM water resistance (quite a bit for an aviation watch). On the 22mm lug width, you get a leather strap. No bracelet options I’m afraid. I have to say, for this sort of money I would expect a bracelet as well as a superb leather strap.

All in all, it sounds pretty cool. The big question being, however – is it worth it? Will people pay that much for a simple watch with GMT and date complication? Being made in such limited numbers, with pieces (albeit tiny tiny pieces) from the Spruce Goose, there is a certain cache. How many folks can say that they have a piece of Howard Hughes’ swan song on their wrist? Well, probably 450 people once Bremont sells all these limited editions. But is it worth 3x as much as the Bremont Solo, the baseline pilot-style GMT? As always, value/worth is a personal judgment. I can safely say that this will likely not be a timepiece that I am going to consider in the near term. I’d have to be a higher-level of aviation and watch nerd to be considering this. However, I would easily consider this over the Sub or GMT-II.

Side note: If Bremont wants to help in the preservation of the aircraft, why are they taking pieces off of it?

So to put things straight, I’m a sucker for a Bremont watch. This might outrage some folks but hey ho. I think this is due to the connection I have with the company with their military theme projects and how robust the watches feel. W

When they announced they were doing another limited edition (not compared to Omega’s output), I was keen to see what they were going to relate it to. My first reaction th the H-4 was ‘meh’. On first appearances the “Wright Flyer” sprung to mind a watch they did a few years ago Then looking at it deeper I discovered the font is different with it being clear, a GMT hand was present as well, and the hands stand out more on the face of the watch.

Looking at the back, the movement is looking amazing with the counter-weight and part of the fuselage carefully placed within the movement. To top it off you could either get it in a steel case (limited to 300), rose gold or for the first time for the company platinum (both limited to 75). Don’t get me wrong, the starting price is a bit steep, (£9495 going to £24995 for the platinum) however this will appeal to someone who is an aircraft fanatic and/or anyone who has a passion for aviation history.

From the Editor: My own reflection on the H-4 is that no matter what Bremont does, price and that “in-house” error is always going to get brought up. The English Brothers, to be fair to them, have tackled this head-on, and I suspect are more than fed up with it continuing to follow them around. However whether you would pay the price of these watches or not, they will sell out, and their owners will be proud owners and a smaller end watch company will continue to thrive and do things their own way, and there is nothing wrong with that at all

Hopefully, that worked well and we may continue to try this sort of format for new watch releases that obviously will spark debate.

Do let us know in the comments section here, on the facebook group or IG post what you think.