Well, it’s that time again! Tuesday has come around so fast this week; we almost haven’t been able to get over the awesomeness of last week. Some of you will be glad to hear, others will be overjoyed, that Omair has come back to me, to us, to #halfwatchtuesday! The last we heard from Omair was that he was going to attempt to capture fish farts and put them into spirit levels, alas he only just realized that he can’t swim. So instead, after trying his hand at both boomerang retrieving and didgeridoo tuning, he’s decided to give up the ghost and return for you all next week, where I’m sure you’ll all wait with baited breath to hear all about his intrepid adventures.

So anyways, onto this week’s article, which is going to be slightly different than perhaps normal. Yes, it is still watch related but as the title suggest, I’m going to talk about straps. And yes, the straps on watches (looking forward to what the guys at Scottish watches write here).

(editors note: nothing, not a word, nothing sprang to mind, no idea what you are on about)

So, a watch strap. Quite often the first thing that one notices and yet something that I feel doesn’t get discussed often enough. There are literally hundreds of different strap and colour options, all looking at trying to elicit a certain look. A glimpse of colour, a quick sight of the buckle, a momentary glance at the discernable pattern. All these little things making the strap what they are. Now, anyone who knows me knows that I’m a strap guy. I love a watchstrap. I really do. I feel it adds personality to a watch, a sense of individuality almost. Regardless of its colour, texture or even feel, changing a watch strap changes the entire look of the watch, even making it seem new in itself.

Now, with all the articles that I’ve written so far (again I apologise for those of you who read this), I am going to instill a question. I want to know how you all go about matching a strap to watches. A couple of my buddies whom I was chatting with this week, were discussing bracelets and how utilizing curved springbars or bending end links could help to solidify the feel of the watch, and it got me thinking just how intricate and almost scientific this strap matching could be. This led me to think how everyone matches his or her own watch to a strap. My CK2998 for example, those of you who’ve seen pictures of it on the black nylon strap, just looks so sleek and classy, the nylon stitching really bringing a stark contrast to the ceramic bezel. Yet, putting it onto a striped NATO or even the red leather version brings out both the dial and the red chronograph hand respectively, adding a whole new dimension to the watch itself.

The second point, which is far more obvious and perhaps relevant to the watchfam is that of price. How often has one craved after a new piece but been unable to afford it that instant, to then realize a new strap or even the strap that the desired piece has, on an existing watch could help to quell such desires for a short time. In actual fact, saving a bit of money, at least in the short term. Food for thought perhaps.

So, in conclusion, apart from enjoying straps myself, I’m interested to hear how you all choose them for yourself. Is it colour, is it brand, is it the texture, the feel, to bring out the fiery red of one’s red chrono hand, anything and everything. And as always, answers on a postcard.

The fun part of the week has arrived! So, which have you have dazzled us, have intrigued us, have made us go ‘hmmmmmmmm’. In our eyes, everyone who submits is a winner, however, these guys have done something a little extra special this week. 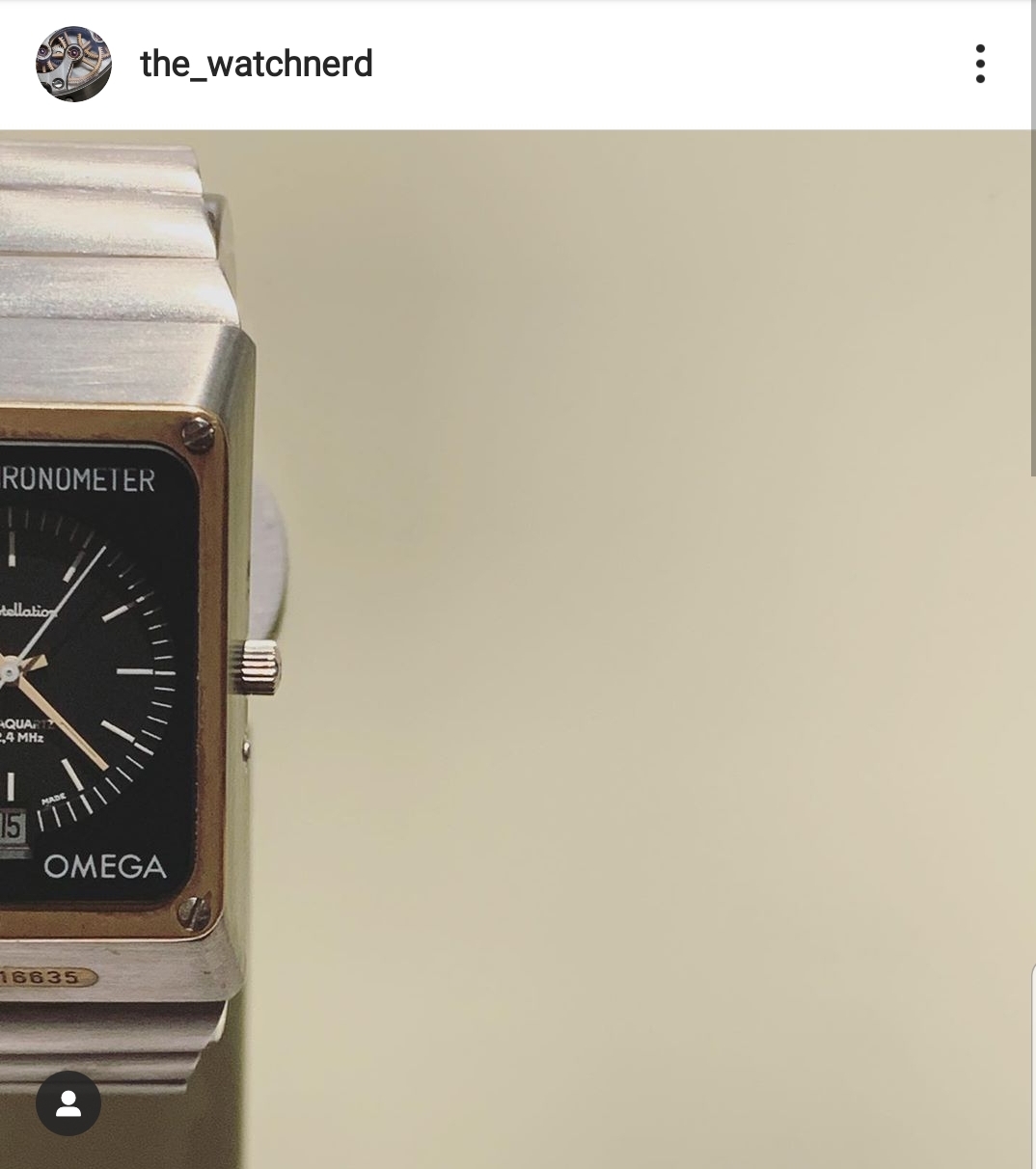 Starting us off this week, @the_watchnerd bossing it with the Omega Marine Chronometer. The piece has got retro written all over it, and just looks so cool and funky. Looks amazing buddy! 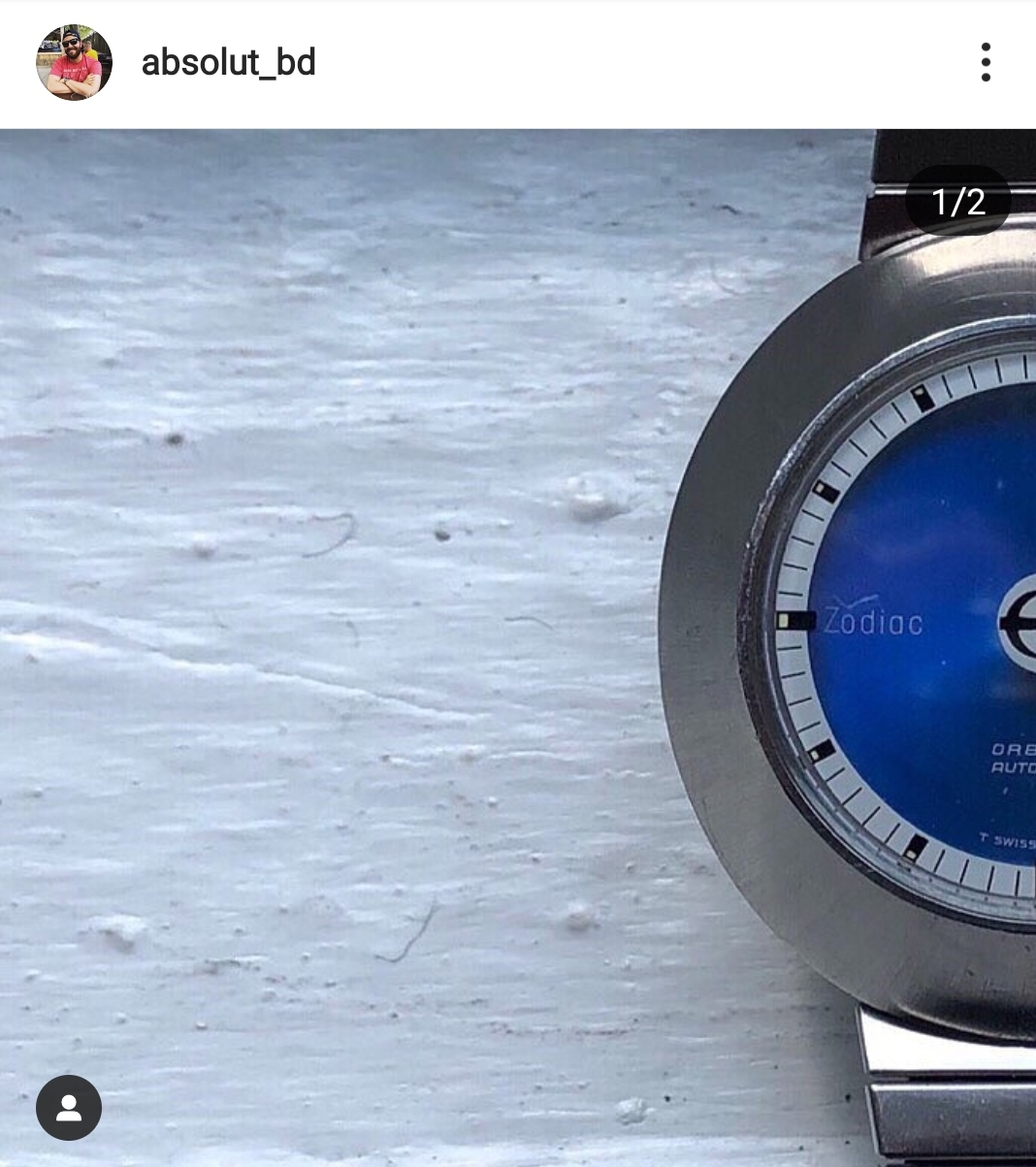 Not to be outdone on the vintage theme, @absolut_bd reigns in with his Zodiac Orbitor. That deep blue dial, the almost crosshair type center arrangement, the FLOATING hands!! Just awesome! 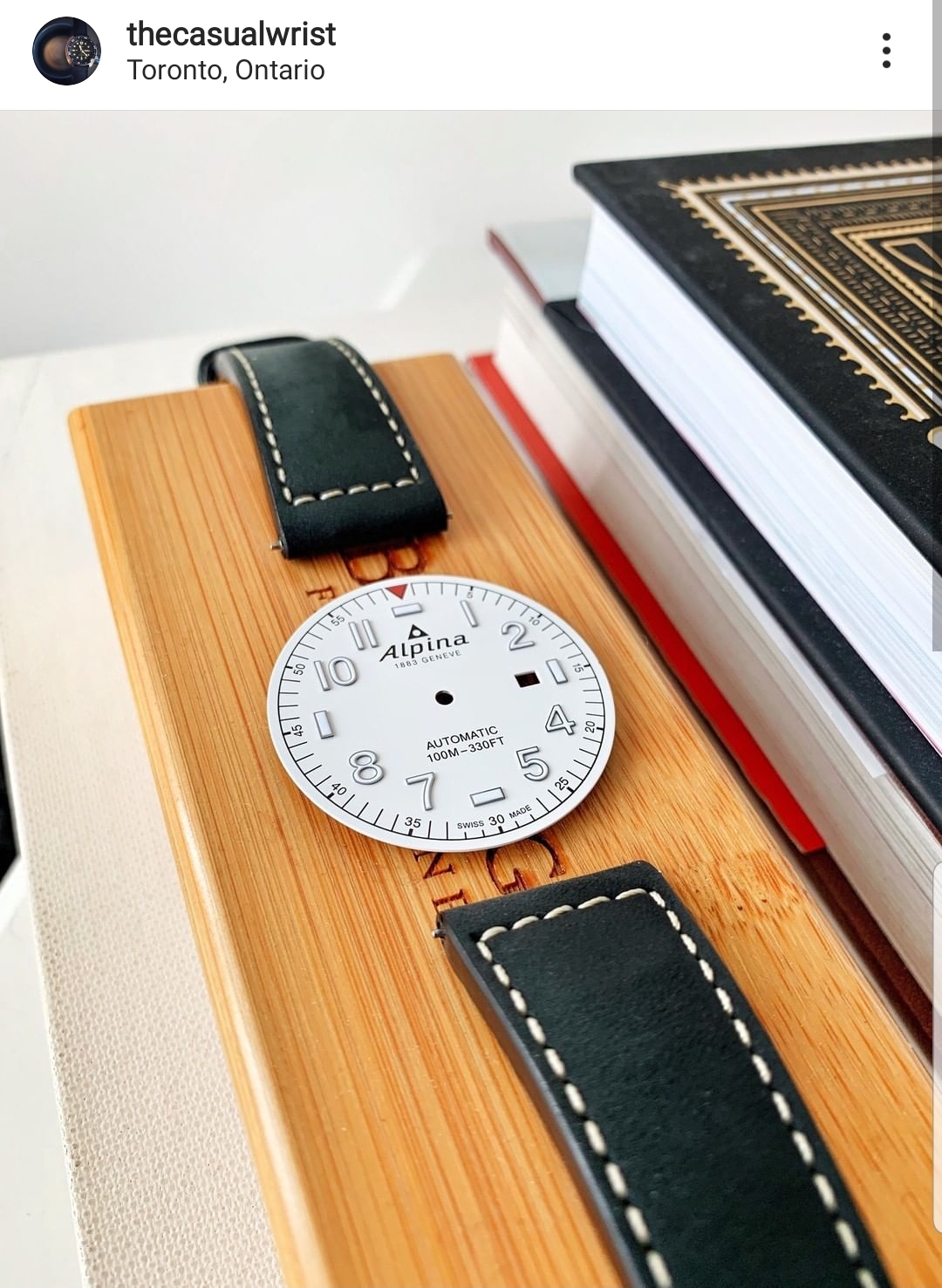 Its official guys, @thecasualwrist has lost it! Bringing a whole load of nakedness and brokenness to #halfwatchtuesday with his Alpina literally in pieces. Sacrifices have to be made for awesomeness and he is certainly leading the way. Cool shot buddy! 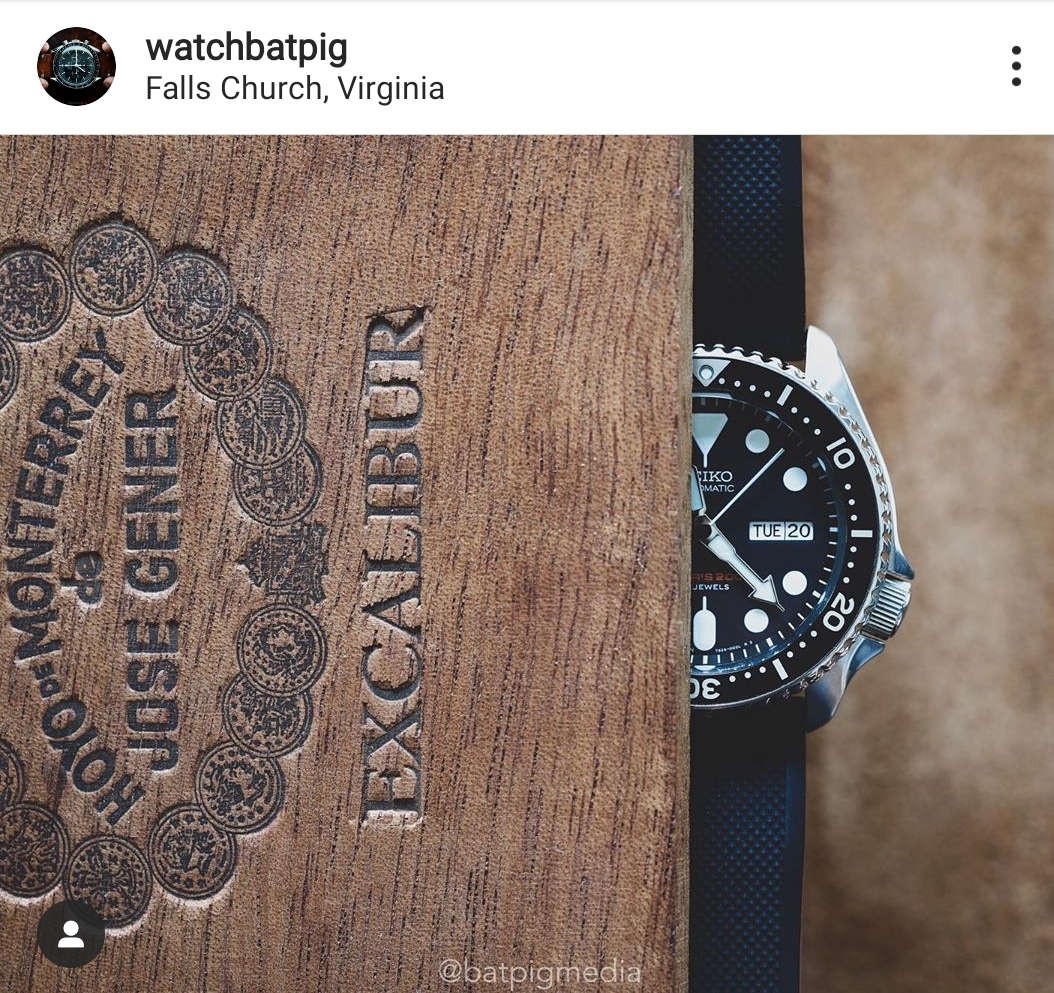 Now I have to say that while I am no smoker, I am quite partial to a wee cigar every now and again. So @watchbatpig offer of such a cigar, whilst mulling over his classic SKX certainly has us humming! Smoking shot chief! 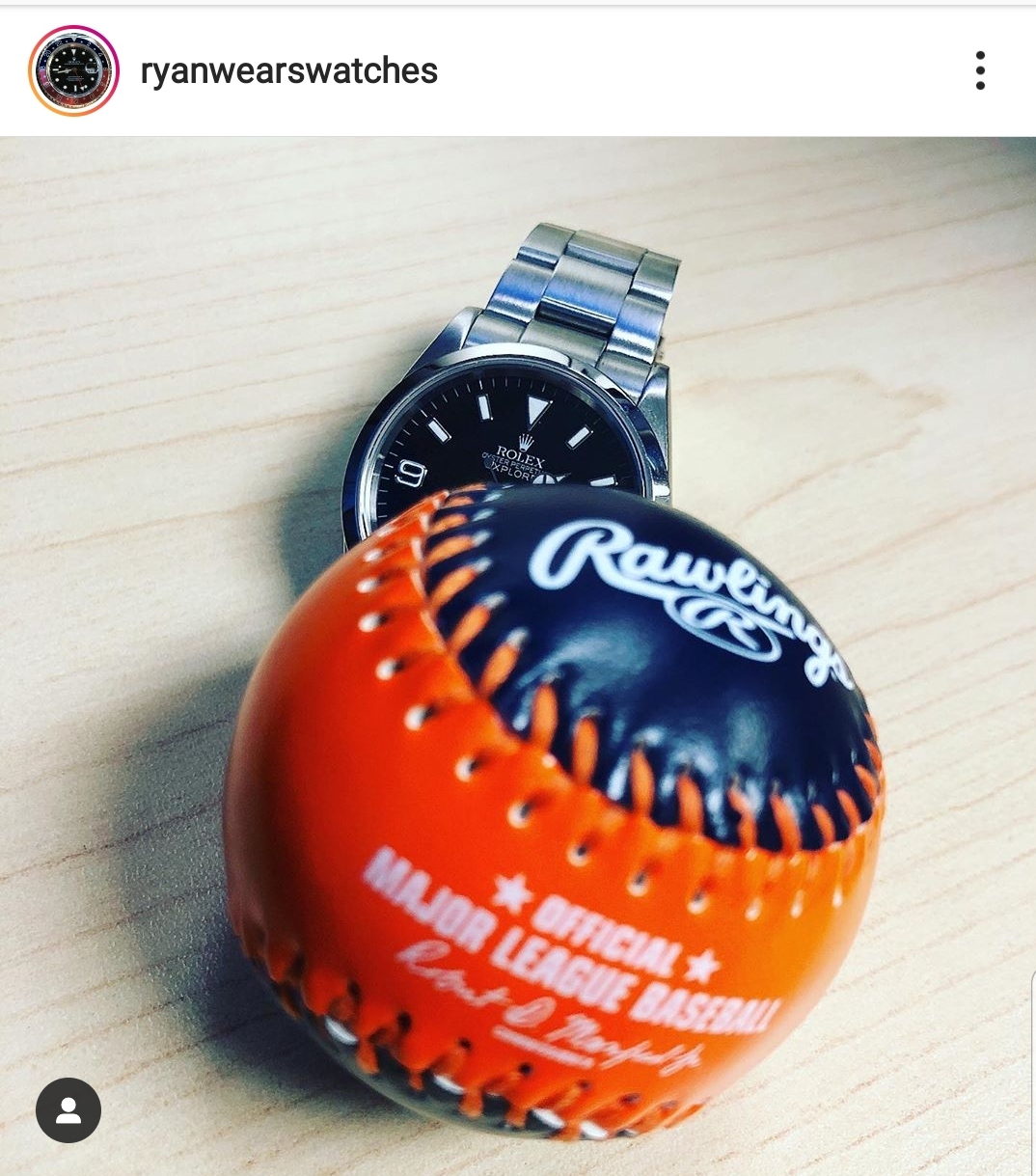 Now baseball is a game that whilst I’ve never played, always appears enjoyable to be able to watch. Exactly like @ryanwearswatches shows us with a cheeky Explorer shot. Just hoping that the ball was stationary at the time!! Brilliant shot! 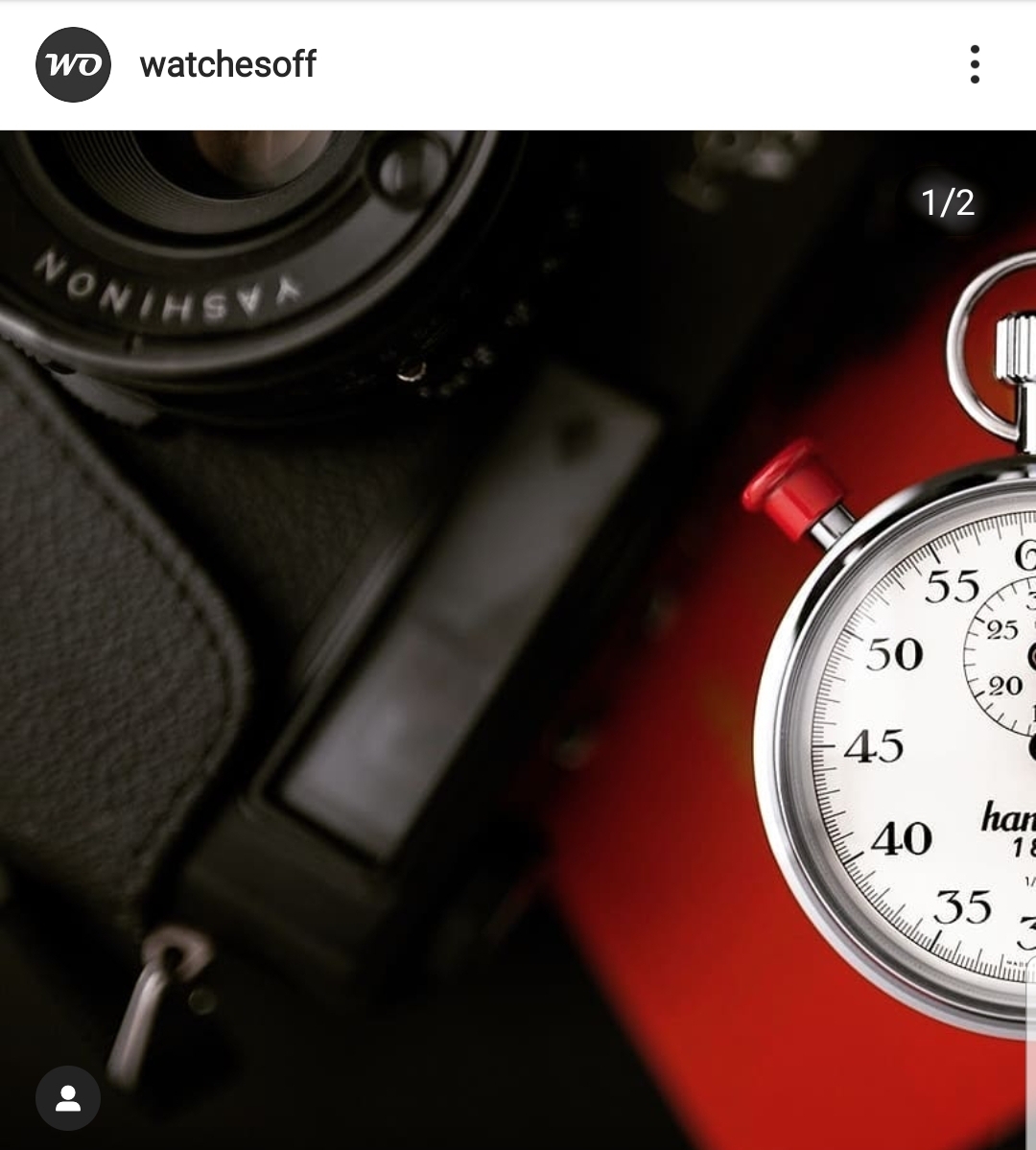 As I’ve said numerous times before, vintage pieces and more specifically pocket watches, are just a red herring for myself, again mainly due to my knowledge being suboptimal with such things. However shots of the Hanhart Classic timer like @watchesoff do absolutely everything to tempt me! I love this shot, the camera within the red background, the crispness, its just beautiful. 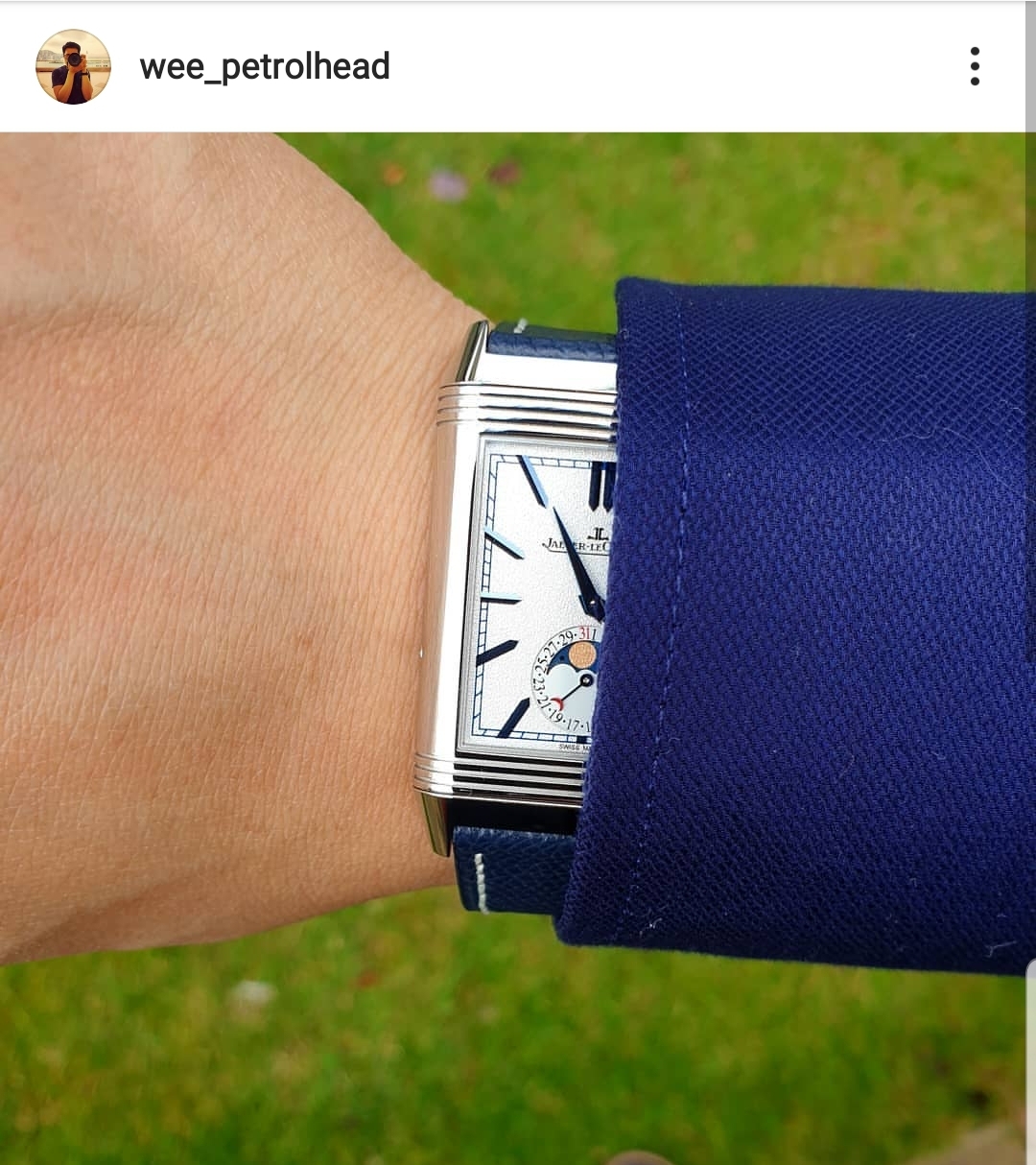 Now speaking of beautiful, is there anything more beautiful or more perfect on the wrist than the Reverso? Well, if anyone says there is, hasn’t seen the @wee_petrolhead shot of his. I guarantee it will ‘reverse’ your thinking! 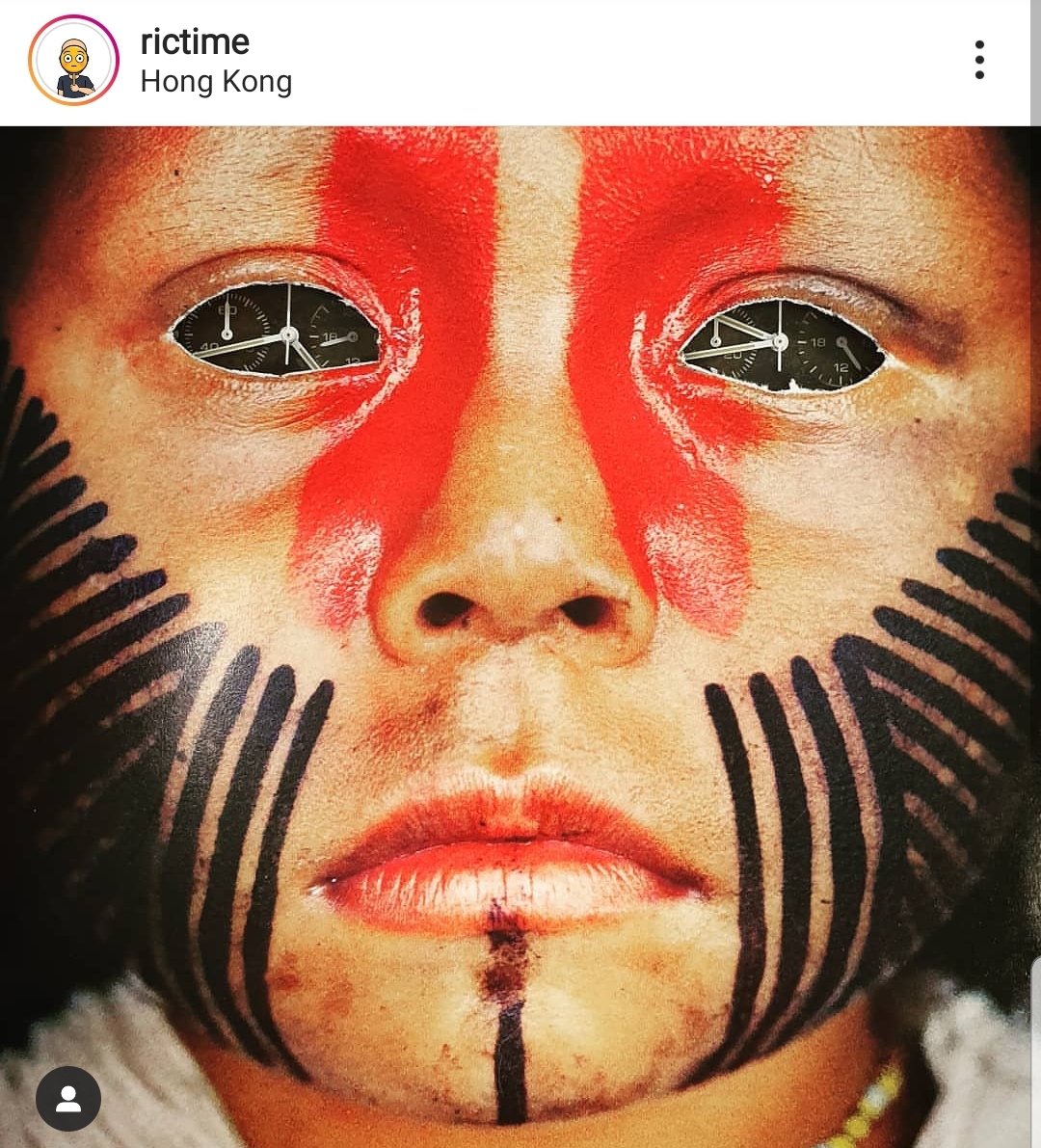 We don’t scare easily here at #halfwatchtuesday, far from it. Having said that, @rictime certainly pushed those boundaries, using something so majestic as the Speedy Professional and turning into something, well quite astounding really. There really aren’t a lot of words to describe this, apart from very imaginative and intuitive. 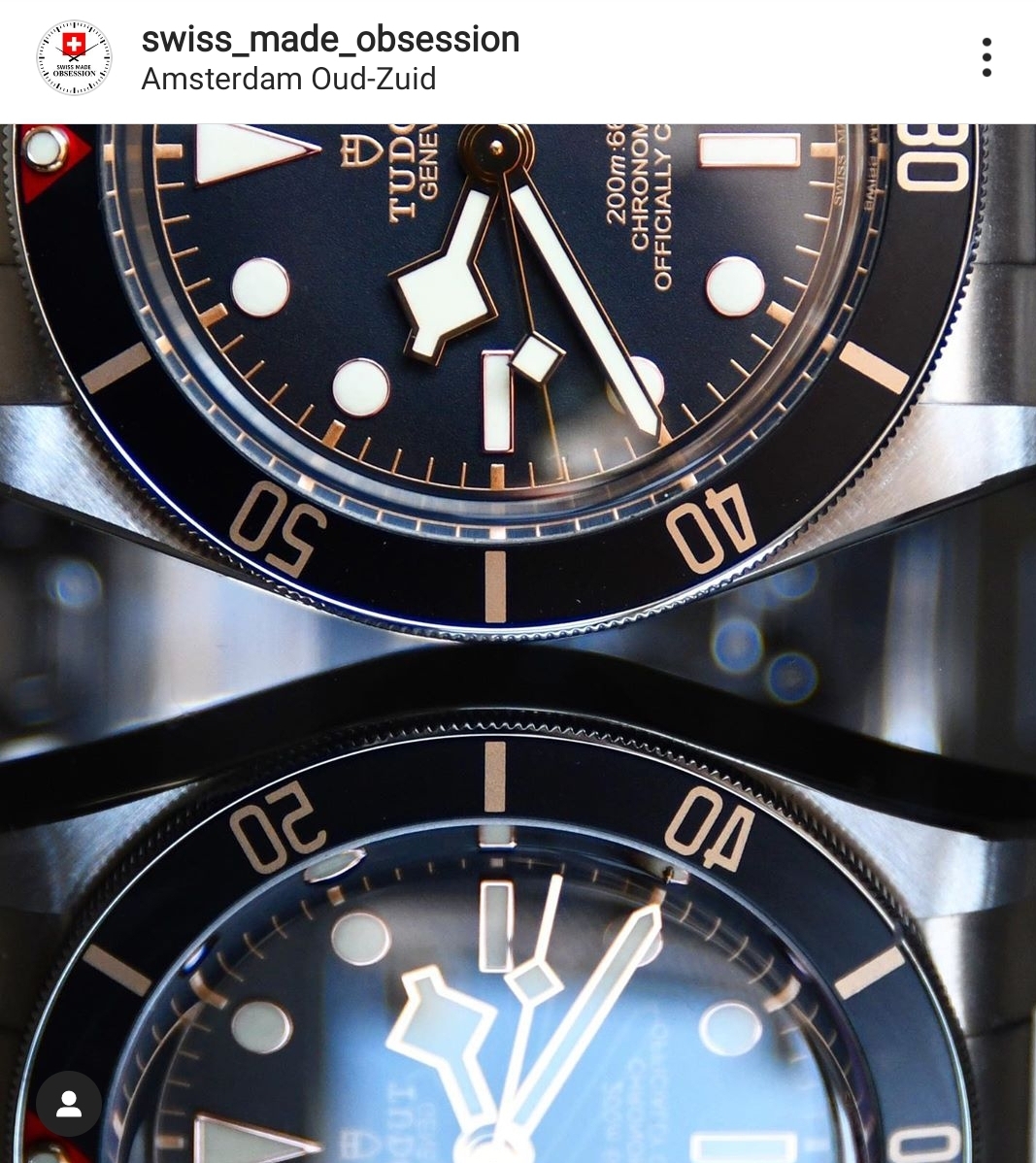 And the final awesome picture of the week has to go to @swiss_made_obsession who made the reflective shot of their Tudor look so ridiculous easy, I almost didn’t want to include their photo out of sheer jealously! Just brilliant in every way. So much so, it’s causing me to take mirrors down in my house just to try this out.

So finally to the shoutout. This week, we here at #halfwatchtuesday just wanted to put a special shoutout to both Beaufort (@beaufortwatches); 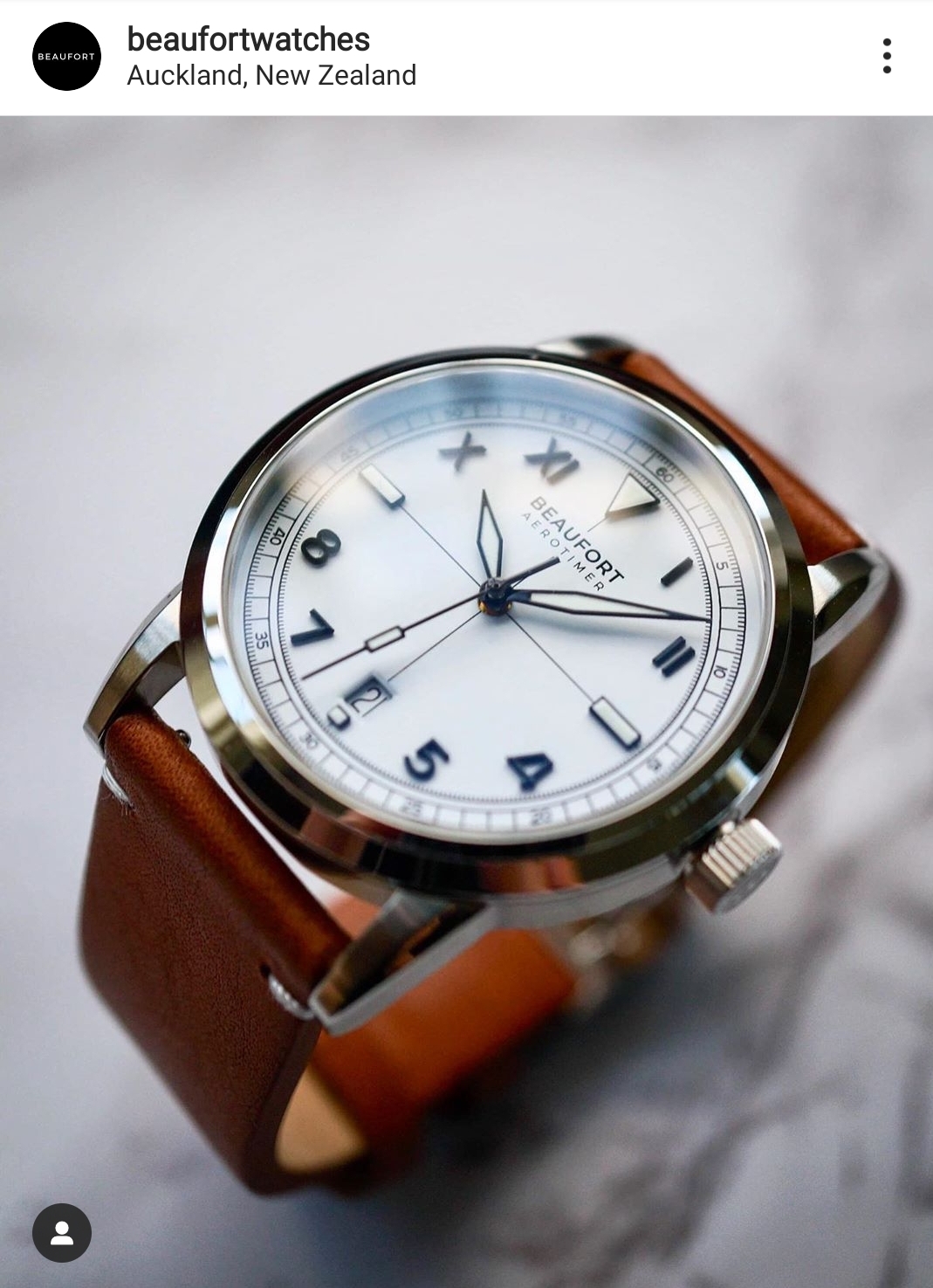 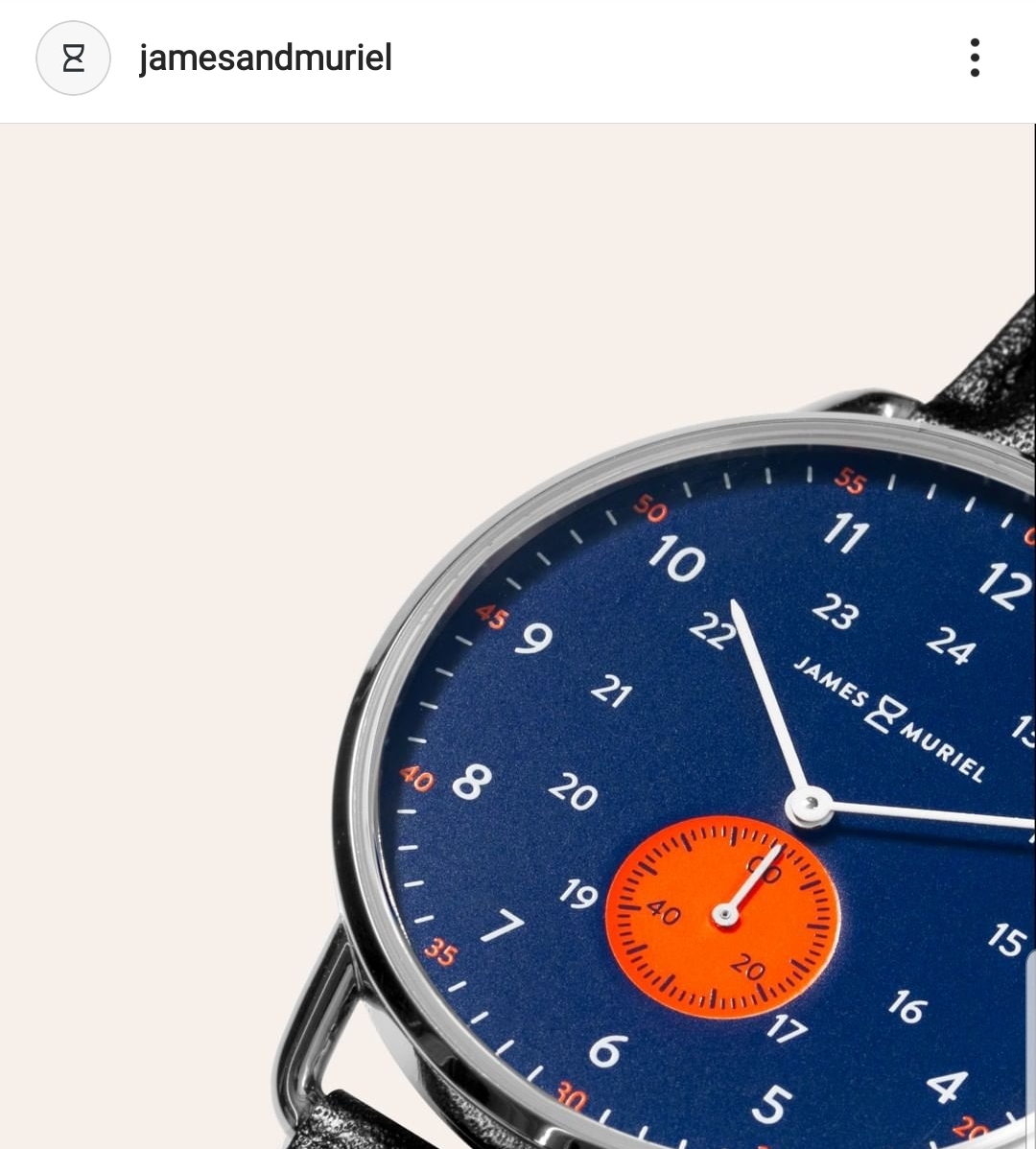 who, have supported #halfwatchtuesday before and who’ve just started their Kickstartes campaigns for the Aerotimer and TimeKeeper respectively. We here at #halfwatchtuesday wish you every success with the campaigns and absolutely implore to check them both out!.