So, it’s happened. After 17 amazing weeks together, the inevitable has happened. Omair has left me. But for those of you worried about your favourite power couple, he’s not left me for good. On the contrary, he’s gone to gallivant on the wondrous beaches of Tahiti to play mixed beach volleyball for the next three weeks and has given me the unenviable task of looking after the Half Watch Tuesday page (apologies in advance for my inevitable failure in keeping up to task with everything, honestly the amount of work this man puts into the page is just amazing). So, unfortunately for next couple of weeks at least, you’ll have to imagine me reading this out loud with the accent of a young Hugh Jackman.

(Editors Note : I would suggest Barry Humphries as an alternative)

Being on the podcast brought up a couple of interesting topics of conversation that kind of stirred my thinking juices if you will. We started talking about how essentially we got into watches in the first place. Again, for those of you who haven’t listened to the podcast yet, I won’t spoil it but do go and listen for a giggle as to my genuine reason for developing an interest in watches, but it did get me thinking; how many of my mates watch origin stories do I know? Honestly, I’d have to say only a couple. I’ve met a number of like-minded people like myself at Redbar events, events at watch boutiques etc that I’ve always just been happy with knowing that they were ‘into’ watches like myself, and that was enough for me. Yet, someone asking me about how I got into watches has left me embarrassingly short of knowledge as to not knowing some of my mate’s personal history with their own watch story. Which then led to a further thought; if I’m not aware of a number of my mate’s horological history, can anyone else within the watchfam describe his or her own friends and colleagues. I guess this is my way of saying that I should really pay a little bit more attention to why people got into watches in the first place and the stories behind them as opposed to just what’s on their wrist. I am genuinely interested in this topic and would love your comments below. For my own mates, I will pay far more attention in the future.

The second point, which is something I’ve been asked more and more recently due to being involved within #halfwatchtuesday is how to start one’s own hashtags, how to maintain it and if I would support other users own hashtag ideas. For me, being involved in creating a hashtag can be like being part of a big family; you can fight and argue and disagree about almost anything but at the end of the day, you couldn’t imagine your life without them. As you guys have probably already heard, this halfwatchtuesday idea came about after a random comment on a random picture and it’s just spiraled from there. Omair and myself never in a million years thought this would come to anything (we still kind of don’t!) yet alone having almost 1900 followers at the time of writing. As far as the supporting other hashtags goes, only one word really answers it emphatically enough….absolutely!! I’m always very keen on seeing peoples creative ideas regarding watch photography, not that there’s any problem seeing the classic pocketshot or anything like that, it just gets people thinking about ideas and different ways of viewing things. Hashtags like #watchpalmsunday done by @thecasualwrist, for example, take a relatively simple concept of taking a photo of a watch in your hand but at the same time, illicit certain creativity traits, which you can thus see in the resultant pictures. In short, I am all for supporting whichever hashtag, just as long as it’s as inclusive as can be.

So, the part that you’ve all been waiting for, the top pics of the week! We start off this week with a cracking motion shot from @right.hand.watch showing off a certain artistic genius with a Mido hidden within a sign. Brilliant! 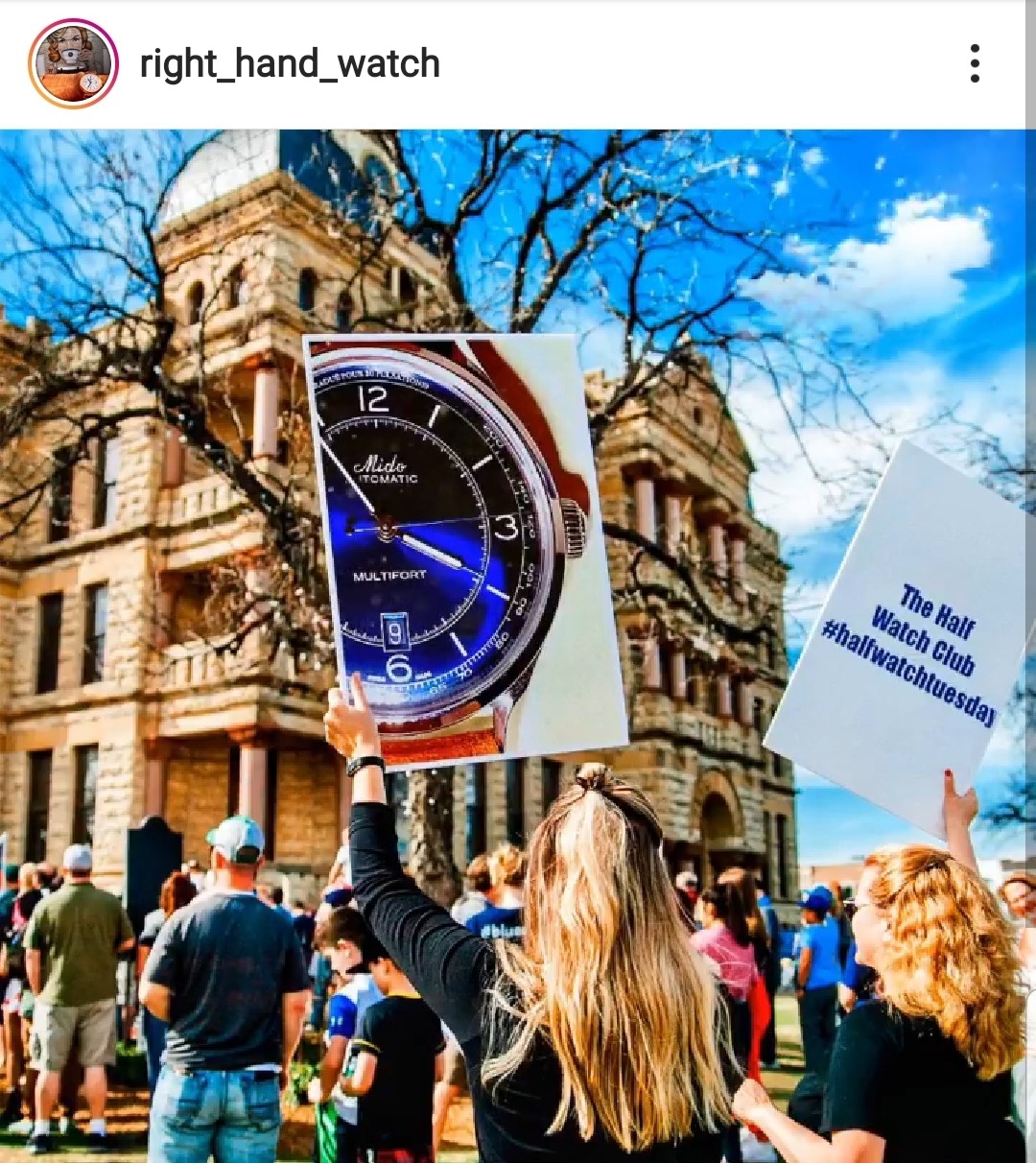 @halfpastblog loves a half watch pic and this weeks submission is no different, his Orient being swarmed by turtles. Loving it! 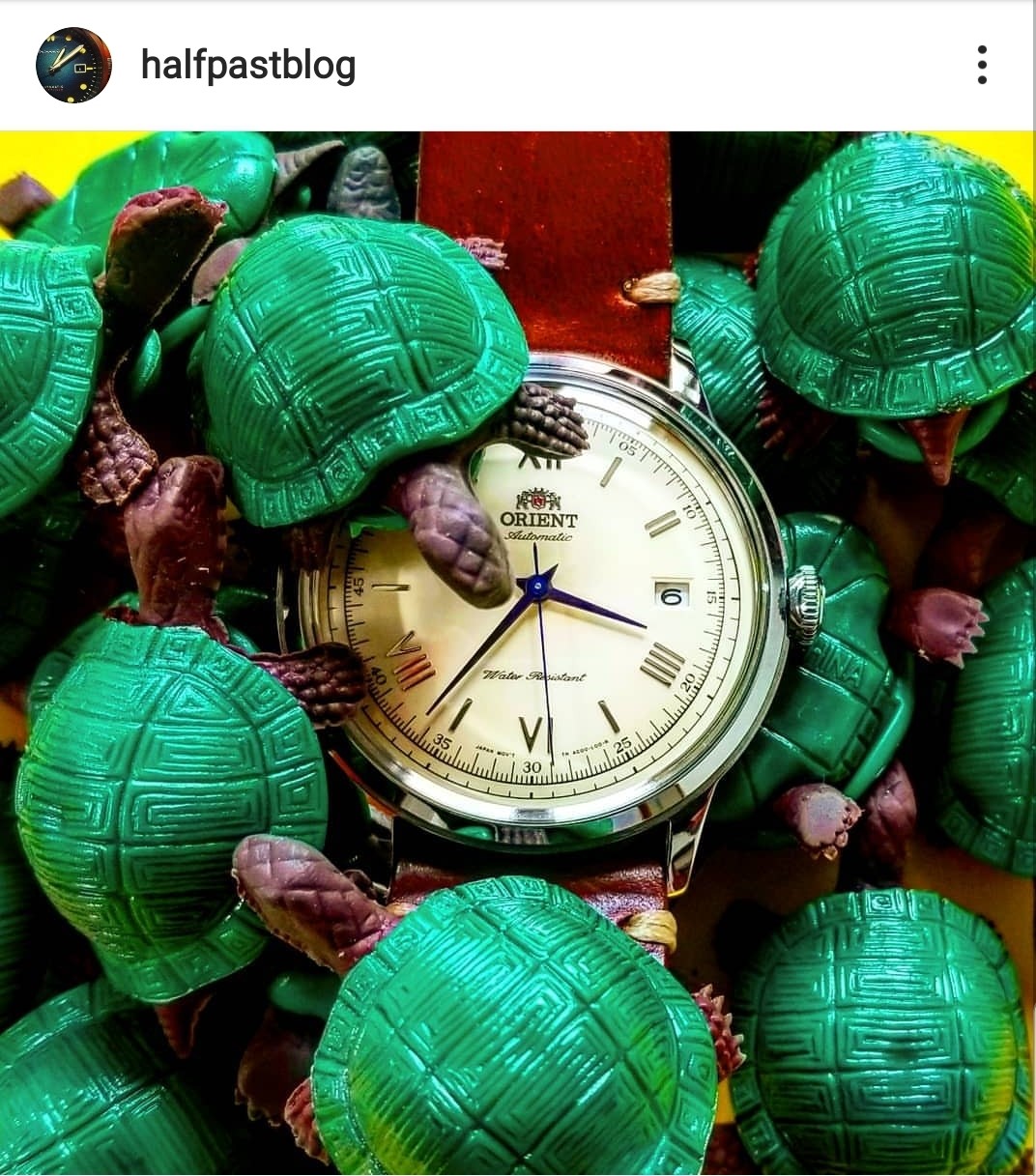 It’s the eye of the Tiger!! Well, from a certain point of view comes @skiesbye and a really clever submission, lining up watches and shadows and everything, great work buddy! 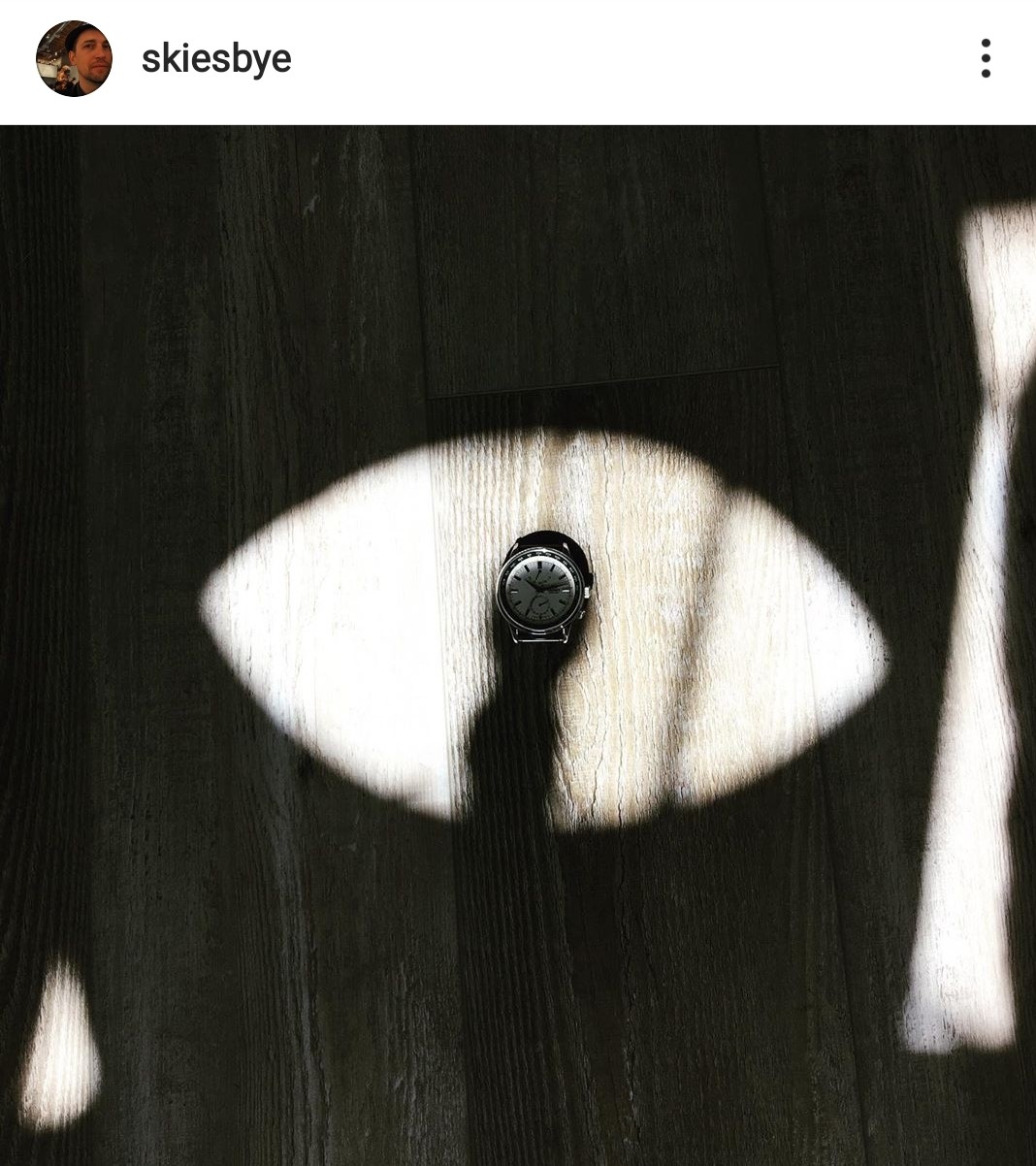 A fellow hashtag creator, @thecasualwrist takes time out of his busy watchpalming on a Sunday itinerary to shoot a colourful accompaniment to his Alpina. Bright and breezy all the way. 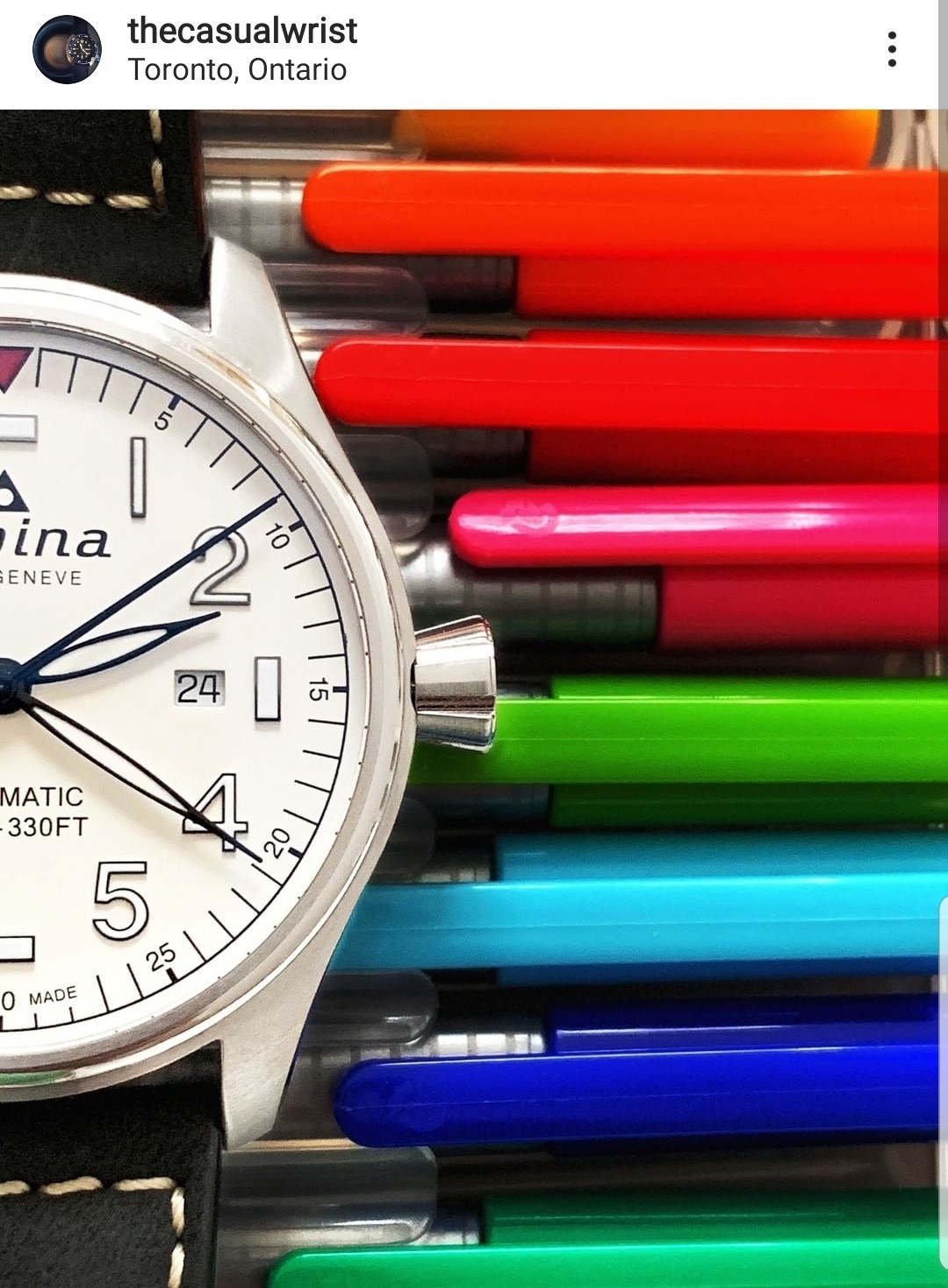 One of only a few reflection halfwatch shots this week, but @richswatches utterly nails it, with the modern Gshock getting up close and personal with a vintage Patek. Does it get any better? 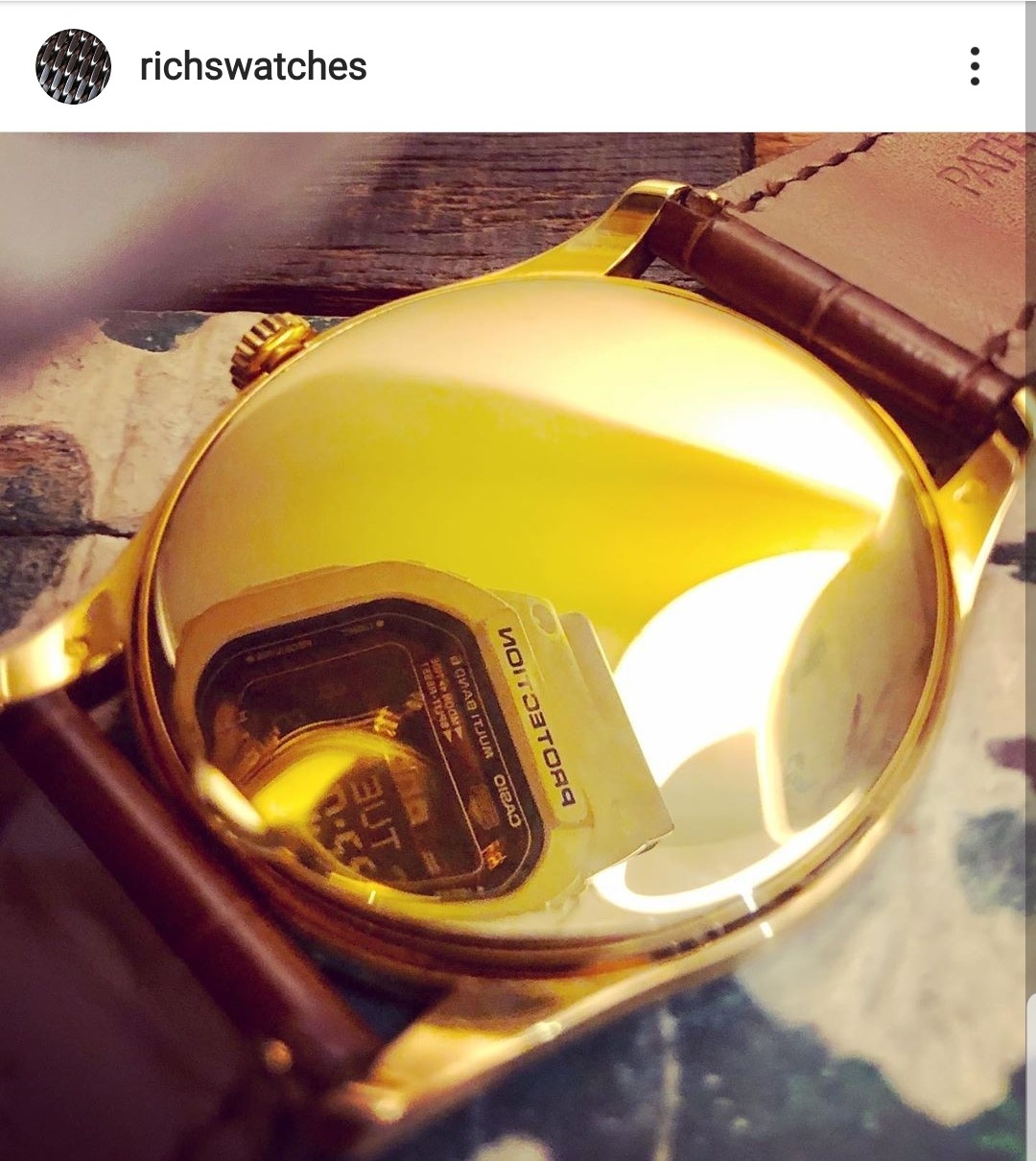 Not a halfwatchtuesday goes by where @grog_jd doesn’t submit a picture and this week was no different, capturing a sweet watch that would entertain the younger horological enthusiast. 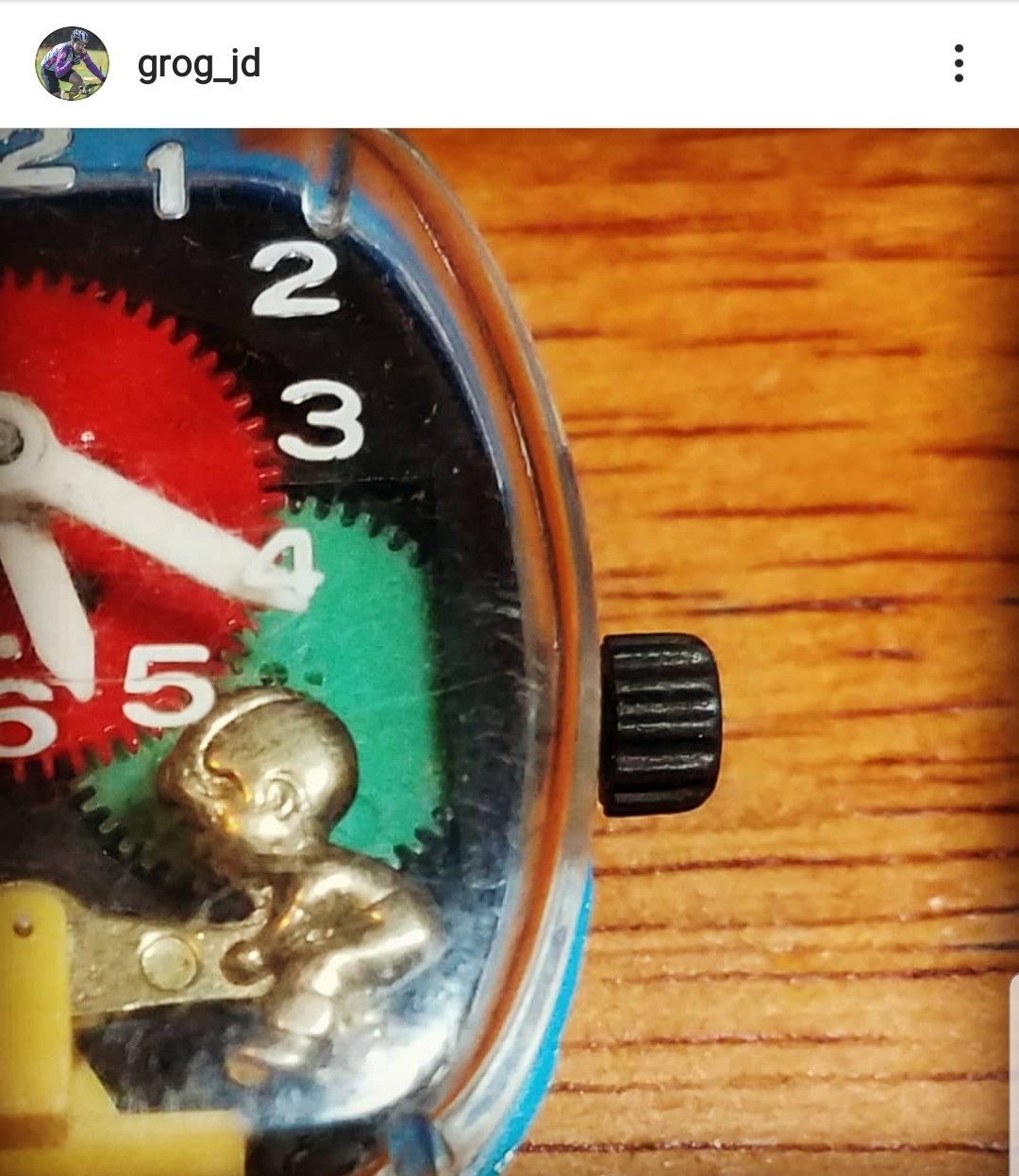 Now I’m not sure where @tyrisclark was when capturing this amazing Deep Blue shot whilst swimming in the deep blue sea but it defiantly made me want to go jump in the Clyde! Well, maybe not but nice capture anyways buddy! 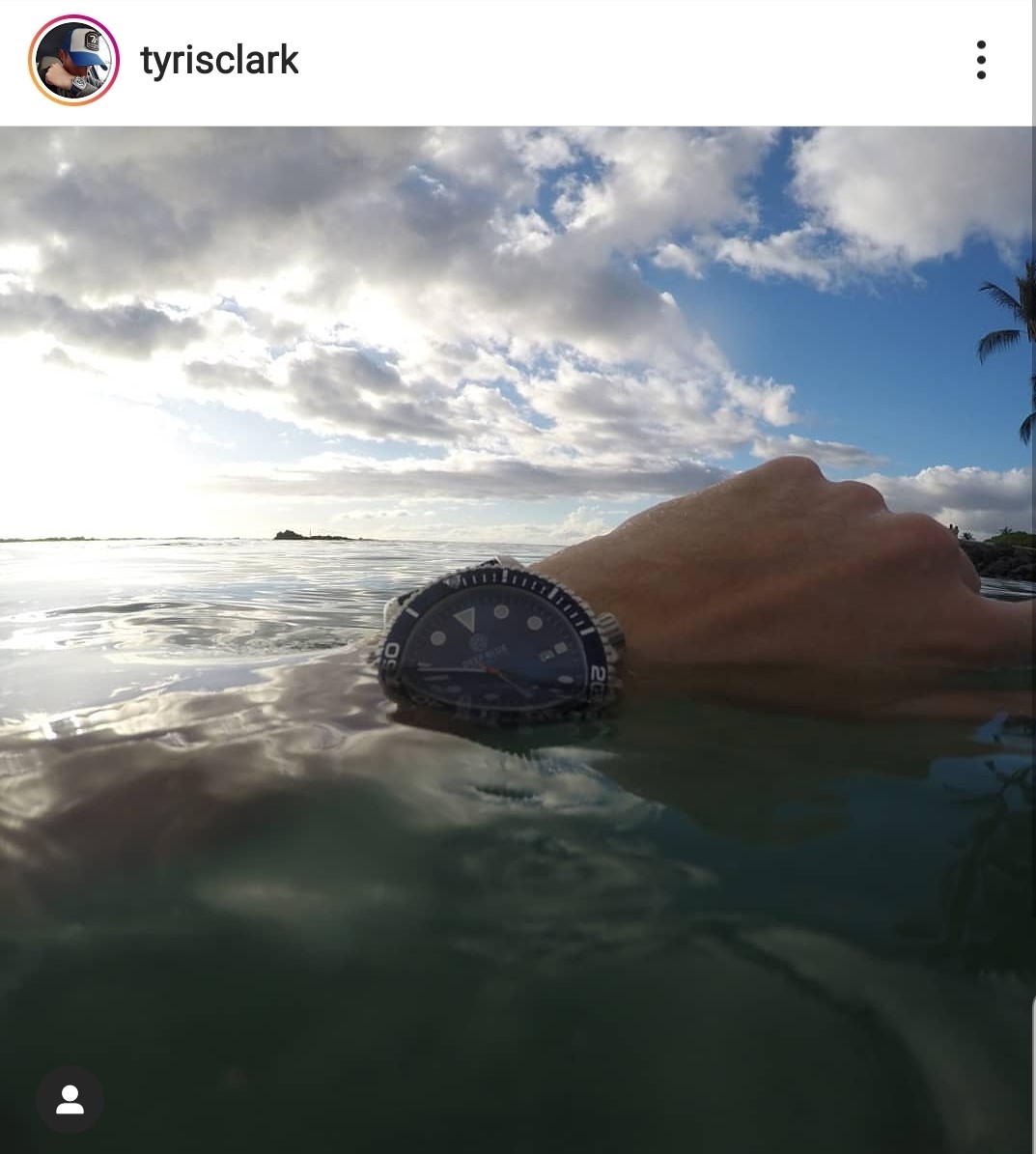 Apart from watches, reading is another hobby of mine, which it seems @dan_occasionally_likes_things also shares, capturing his vintage Omega. No time wasted here shooting this at all! 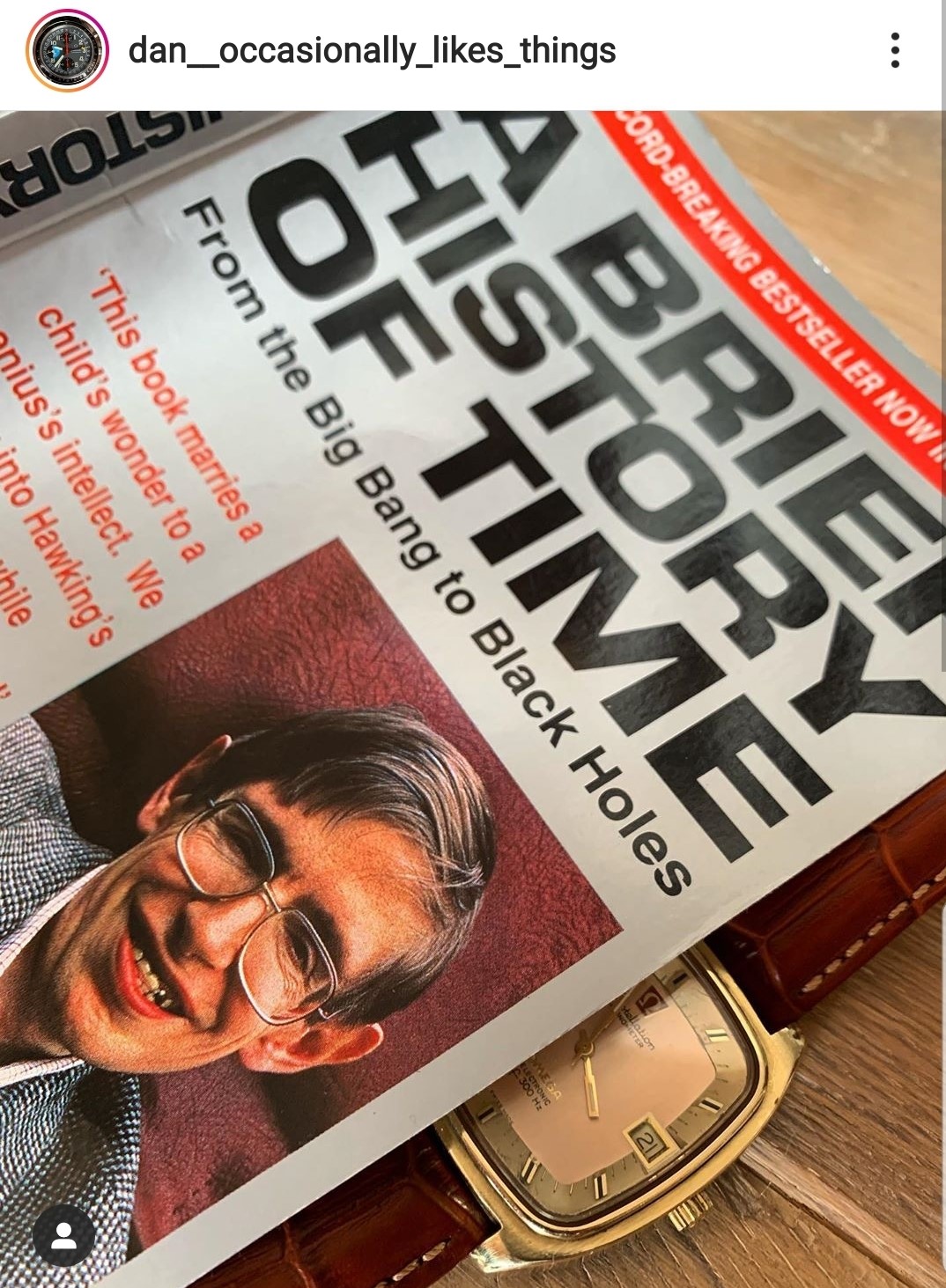 And last, and absolutely not least, @darren_1111 closes halfwatchtuesday with this highlight, or lowlight should I say, the Tudor sneaking out of the shadows, just wonderful. 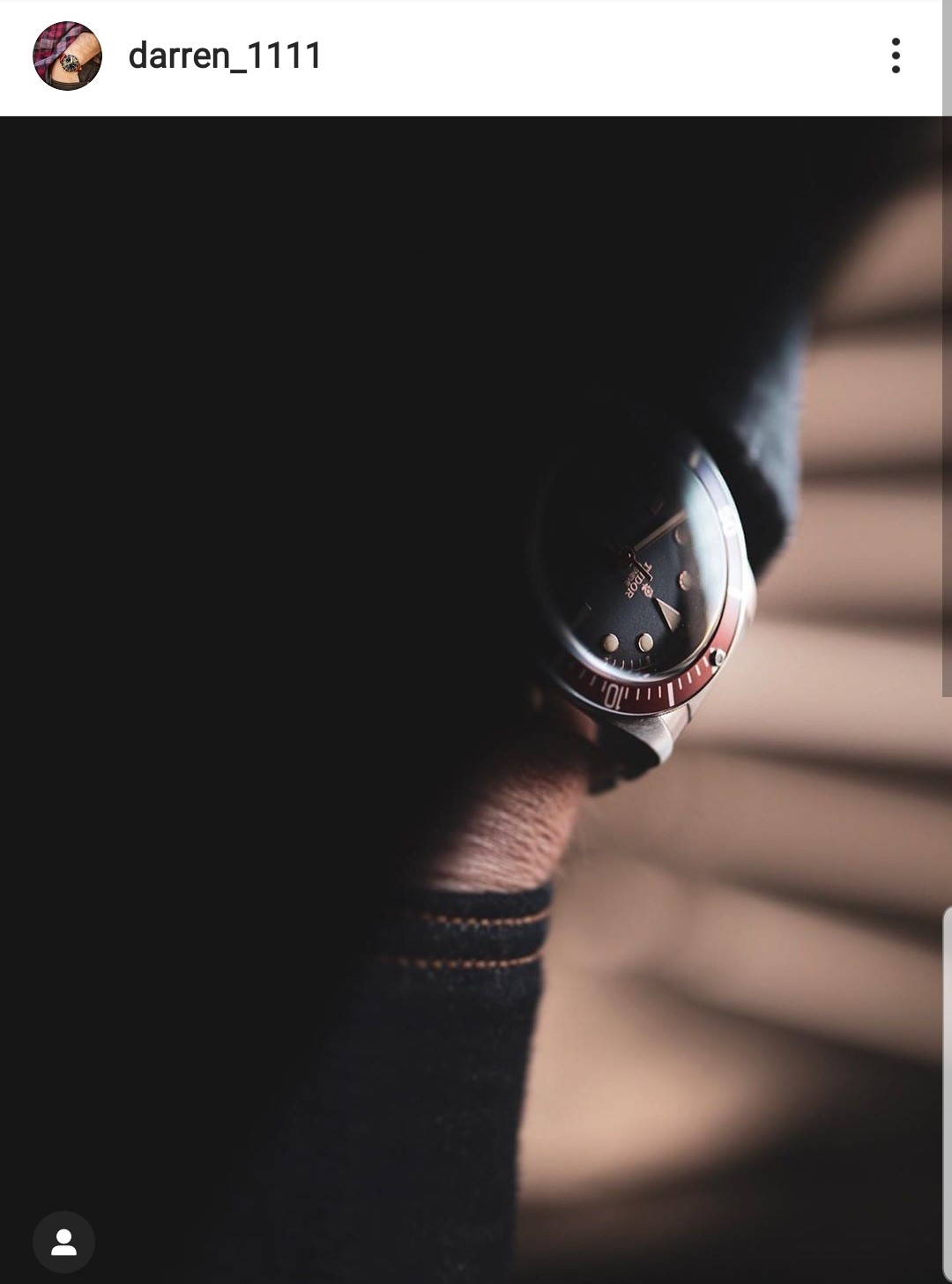 Well, our time has come to an end here at #halfwatchtuesday but before we go, we have a couple of shoutouts to some microbrands new to the #halfwatchtuesday movement. First up, @Lumtecwatches, straight out of the good old US of A. Chris and the crew look to make some pretty solid pieces and I would rather like to get an up, close and personal feel with a couple of them. The divers the 350M-3 with the orange chapter ring looks particularly nice, although my pick of the bunch, the Combat B44 Chrono, just lovely. Definitely worth a checkout. 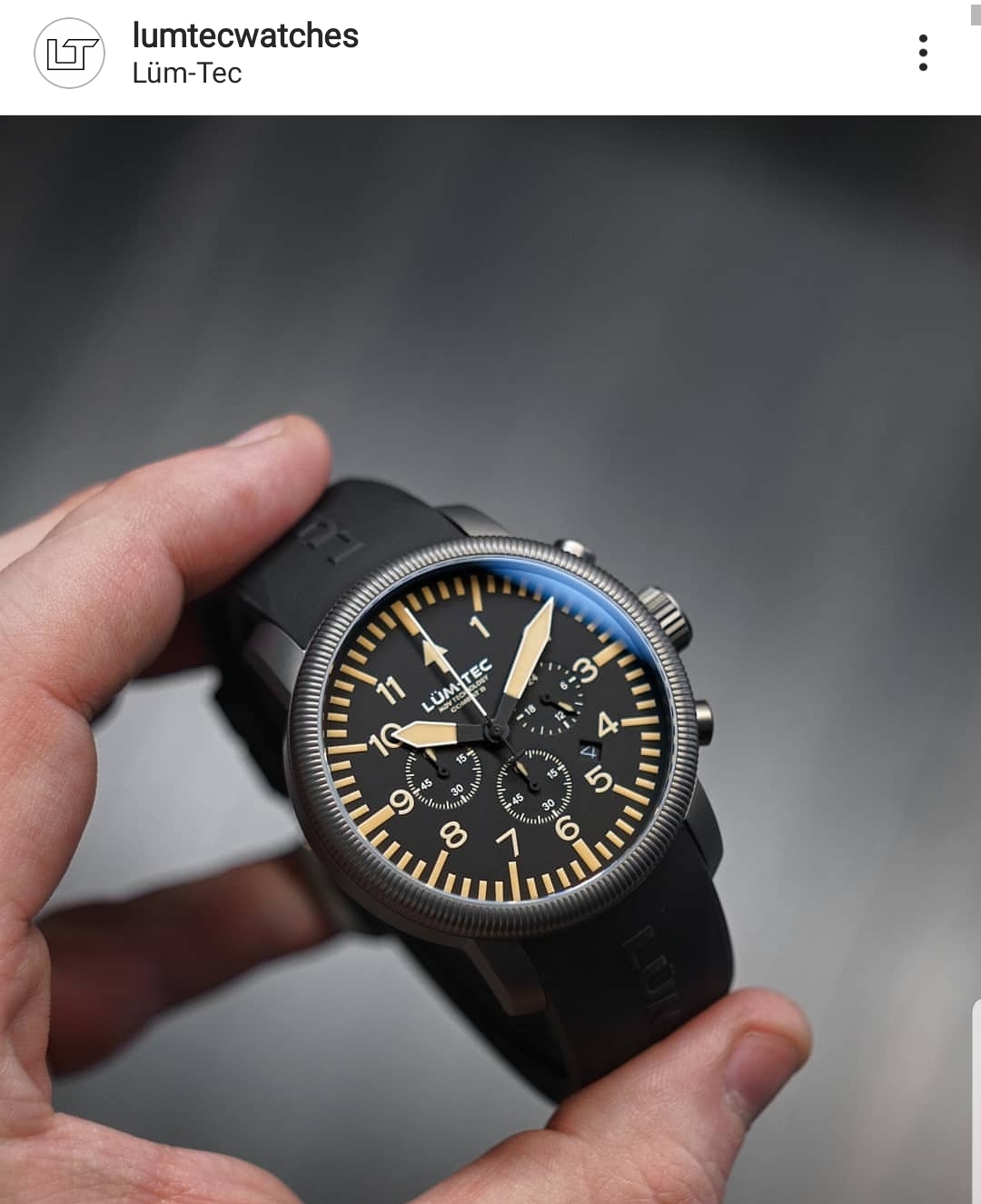 A Canadian brand this time, Novowatch create some pretty incredible handmade pieces. The fact that these pieces are made using original railroad steel from Canadian railroad history is a pretty sweet quirk for someone who’s keen on understanding the history behind a watch like I am. Check out pieces like the Suffield, with an amazing wartime history and the Coalbanks Barrow edition, with its dial made from century old steel track. 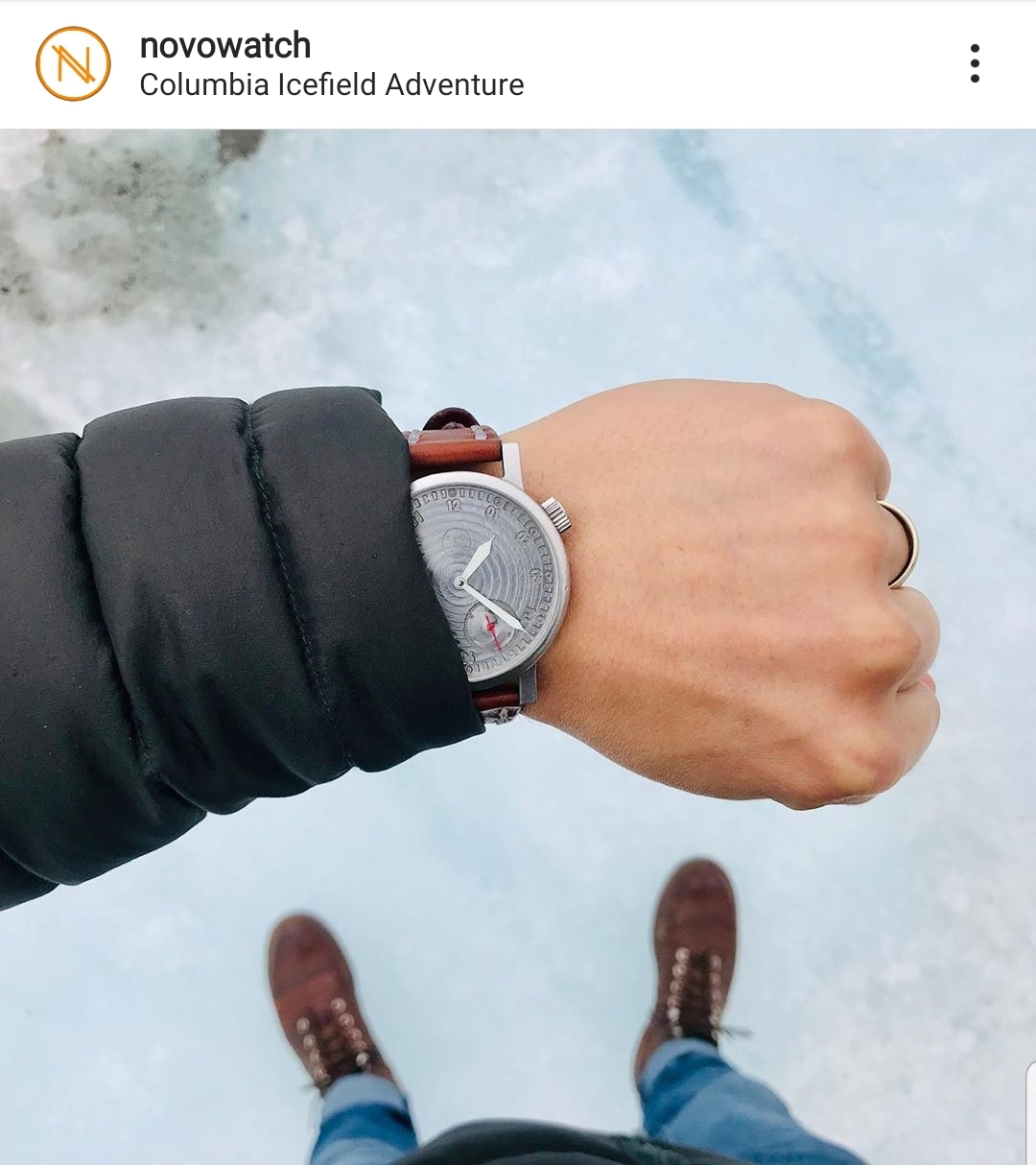 And now, out time really has come to an end for this week. Thanks so much again to everyone for continuing to support us by messaging and posting, its all so very appreciated. So, Omair and myself look forward to see what next week brings, until then, ill be brushing up on my microbrand history in case @aggressivetimingshabits decides to ambush me with another pop quiz 😉