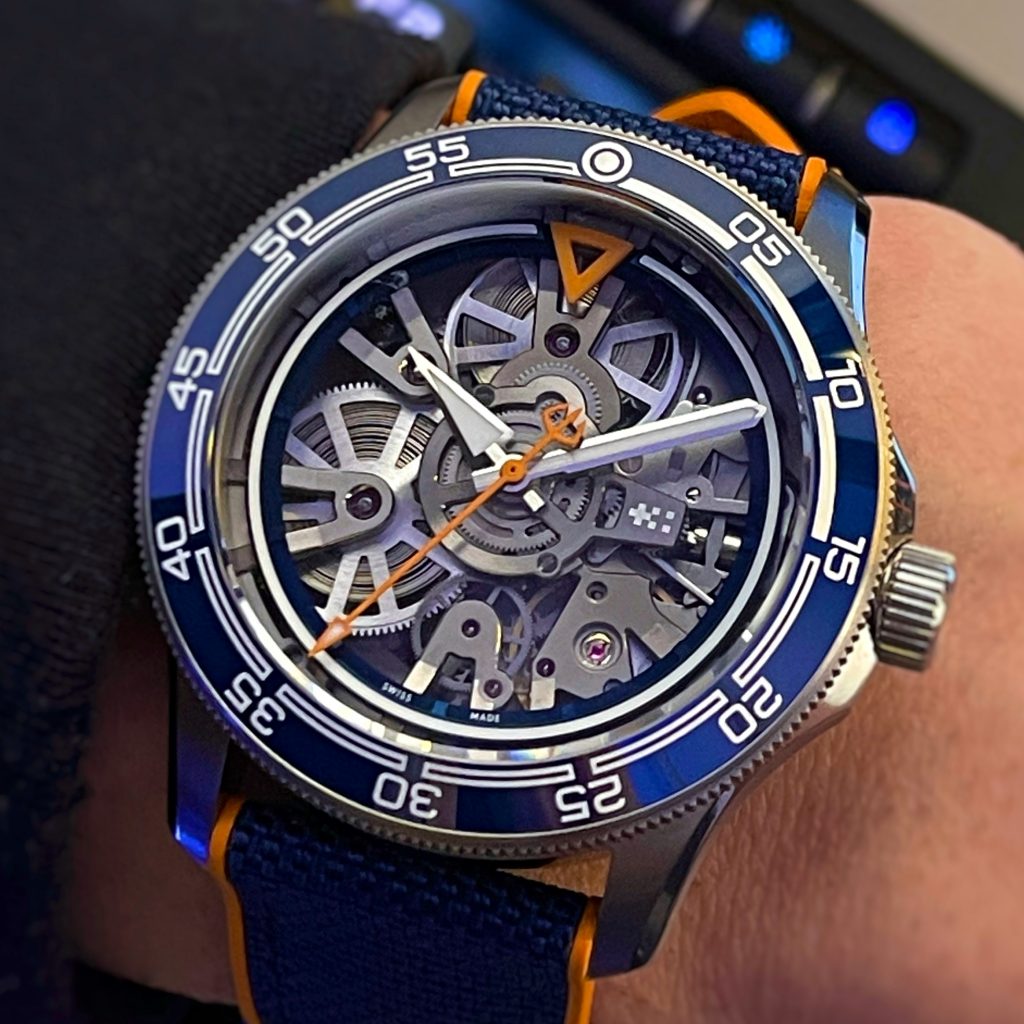 Movements, the beating heart of any mechanical watch. Sometimes a matter of pride, sometimes a source of controversy. They should be celebrated. Whether they are a humble Citizen, ETA or Selitta these little engines make a watch a watch. Christopher Ward make use of a lot of bought in movements but they also have their own movement; the Calibre SH21. This movement was designed by Johannes Janke and is assembled and tested in their atelier in Biel/Bienne. For a movement which powers about ten percent of their watches we don’t hear much about it. No more, the new C60 Concept from Christopher Ward is all about the SH21. 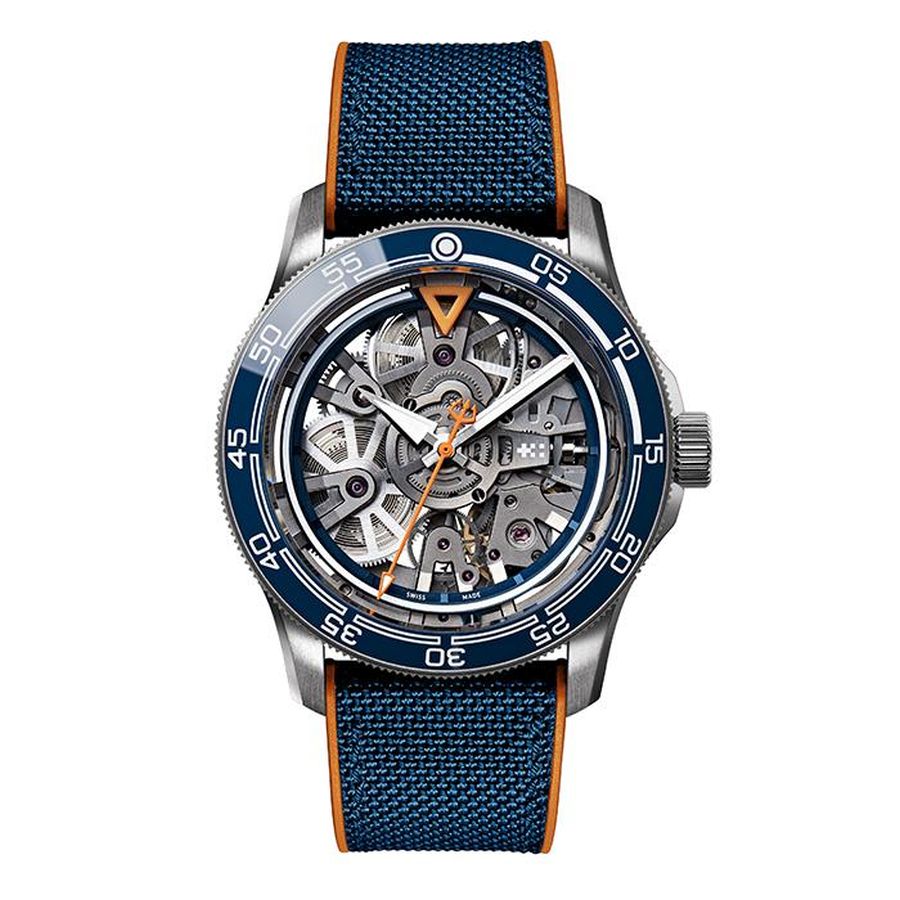 The Calibre SH21 was first introduced in 2014 and has provided reliable service in many Christopher Ward models since then. According to Mike France it is their most reliable movement. It has been featured in the C7 Apex and C60 Apex but with the C60 Concept they have taken the celebration of SH21 a step further. A giant leap further.

The C60 Concept is a 42mm watch with a blue ceramic bezel. Nestling within the Grade 2 titanium Light-catcher™ case is a fully skeletonized Calibre SH21. Like all Calibre Sh21 movements this is COSC certified and supplied with the COSC certificate. The watch has 300 meters of water resistance and is a limited edition of 210 pieces.

The design features the familiar hour, minute and seconds hand from the C60 range. The hands are finished to a very high level with a variety of surface treatments particularly on the “sacrificial dagger” hour hand. The second hand is painted orange and has the trident counterweight. There is a ring just inside the bezel. This ring has an outer lumed, white portion and an inner ring carrying small 5-minute index markers. At the 12 o’clock position there is a three-dimensional noon indicator that floats above the inner working of the watch. In keeping with the Apex watches the Christopher Ward wordmark isn’t used. Instead, there is a subtle twin flags logo at the 3 o’clock position. 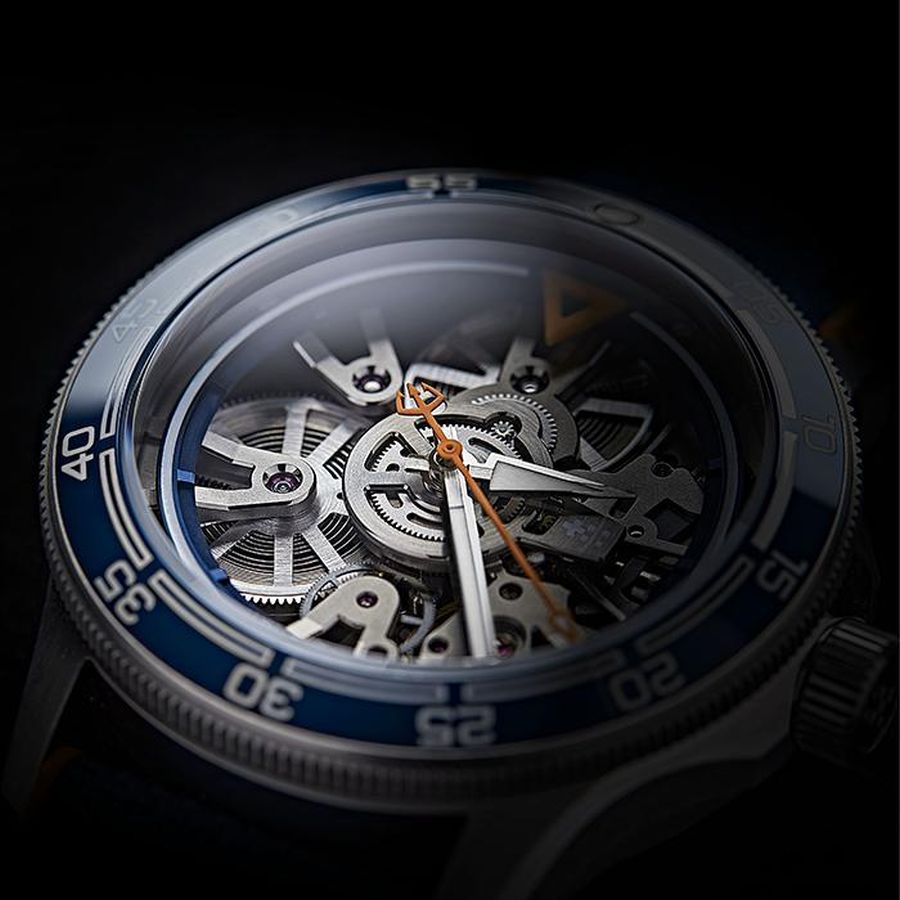 The bezel features a new design treatment with a modern font and solid white rings between the noon to 15 minute indicators and curved line boxes between the rest of the 5 minute markers. The lume pip is a circular dot surrounded by a white ring. This is a very modern update to the bezel and works very well against the city scape of the Calibre SH21 inside it.

Christopher Ward have always been very open about the partners they work with. For the C60 Concept they have their partnership with Armin Strom to help with making the bridges and base plate. These bridges have had up to six hours of hand polishing by Chronode. Chronode are a Swiss company with many areas of expertise. Their expertise in chamfering and hand polishing can be seen on many parts of the watch. These polished chamfers add further depth to the watch and allow the eye to move deeper into the details of the movement.

The other significant partnership is with Xenoprint. Xenoprint specialize in three dimensional lume with their Globolite® 3D material. This allows the production of pieces like the orange triangle marker at the 12 o’clock position. The piece is formulated, formed and then CNC machined. It is fixed in place at the 12 o’clock position and floats above the SH21 like an aerie on a skyscraper. 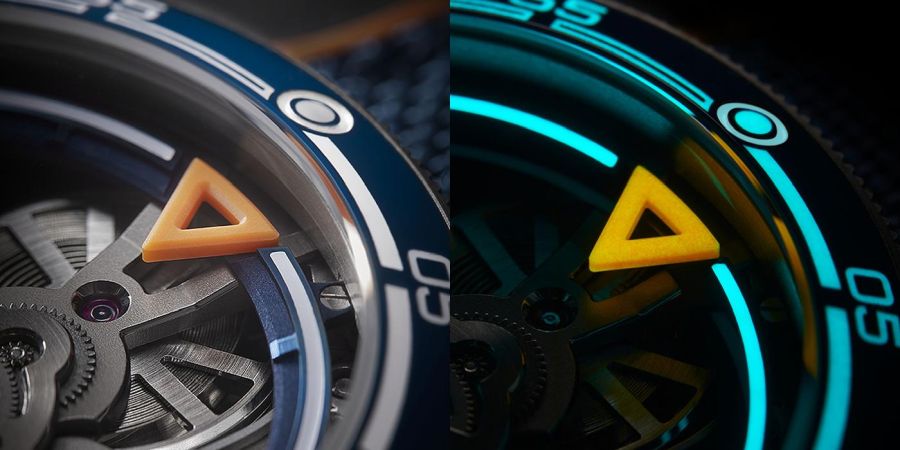 Christopher Ward have been busy raiding the secret Luminova stockpile for the C60 Concept. It’s not quite “if it moves apply lume. If it doesn’t move apply lume until does.” Level but it comes very close. 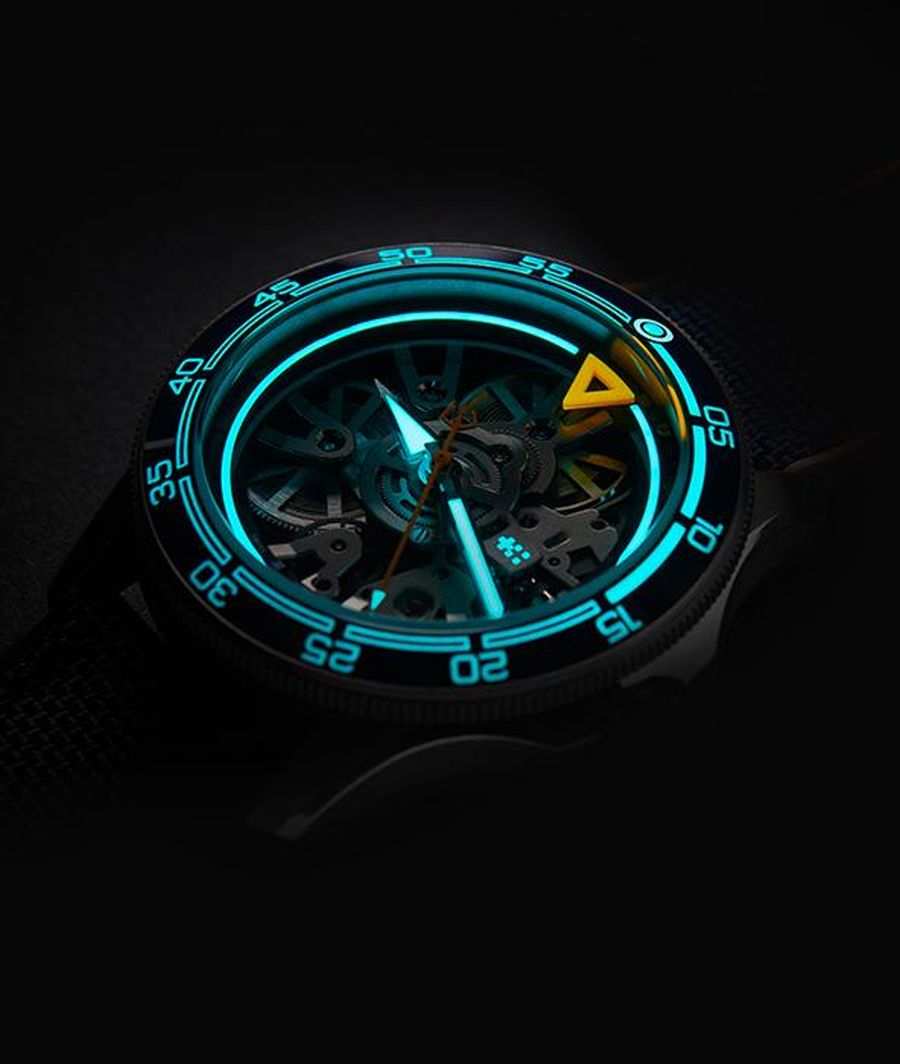 The Calibre SH21 was first introduced in May 2015 for the C9 Harrison five day automatic. It has been used in a number of watches since and has been made in four automatic and six hand wound versions. It has a 120 hour power reserve (5 days). It beats at 28,800 vph and in this no-date version it has 31 jewels. There are ruthenium and rhodium coated pieces to give a variety of surfaces and textures intended to enhance the depth of the movement. It’s not a small movement. Anything with a 120 hour power reserve has to store all that energy somewhere. 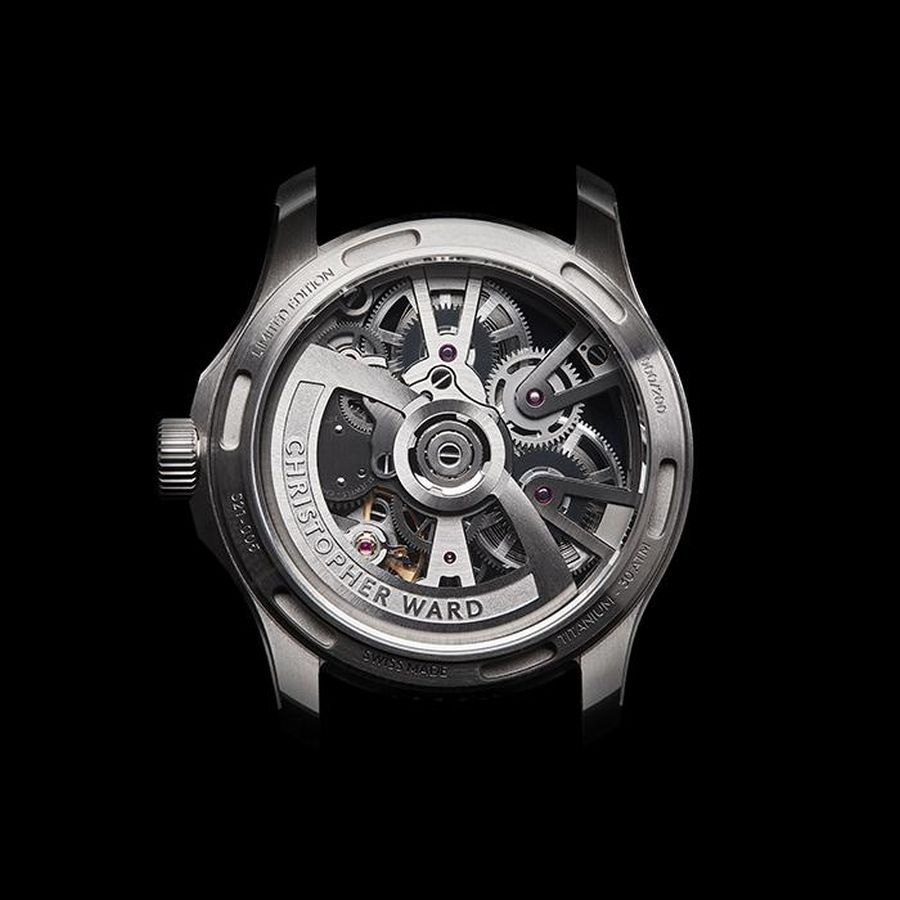 The rotor is made from tungsten. Tungsten is a very dense metal (Osmium is the densest) that can eb worked and finished to a high standard. For a skeletonized watch using a high-density metal allows a lot of volume to be removed and still give sufficient mass to drive a watch movement. In the C60 Concept the rotor has a brushed finish and the Christopher Ward wordmark is engraved into the edge of the rotor.

This is a very robust, reliable movement and now has significant production history behind it. It is relatively inexpensive to service although service has to be conducted by Christopher Ward.

Imagine looking out over New York from the “Edge” deck at 30 Hudson Yards. Imagine falling from a skyscraper like Major Kusanagi in Mamoru Oshii’s 1995 masterpiece “Ghost in the shell” and then look at the C60 Concept. You fall through a complex, multi-surfaced, multi-colour landscape until you come to rest at tungsten rotor. The C60 is no cyberpunk dystopia. It is a modern design statement that celebrates Swiss watchmaking and Christopher Ward’s design expertise. It’s one thing we thought we’d never see from Christopher Ward; a fully skeletonized watch. It celebrates the Calibre SH21 in a way that surpasses the previous Apex watches and shows just what Christopher Ward and its partners can do.

There are a lot of skeletonised watches available. Very few of them manage to convey their brand’s identity successfully. The Oris Pro Pilot X could have been made by anyone. The C60 Concept could only be a Christopher Ward. The brand’s design language is present throughout from the trident on the second hand to the orange lume at the 12 o’clock. There are subtle references to features of trident watches in the slots around the pinion and in the lumed sections of the ceramic bezel.

If a 300m, titanium case, COSC certified fully skeletonized watch isn’t enough for you this 210 piece limited edition has another stand out feature; the price. Each individually numbered piece has a cost of £3,495. That’s £3,495 for an automatic movement with a 5-day power reserve, hand finishing and the famous 60/60 guarantee. Beat that. 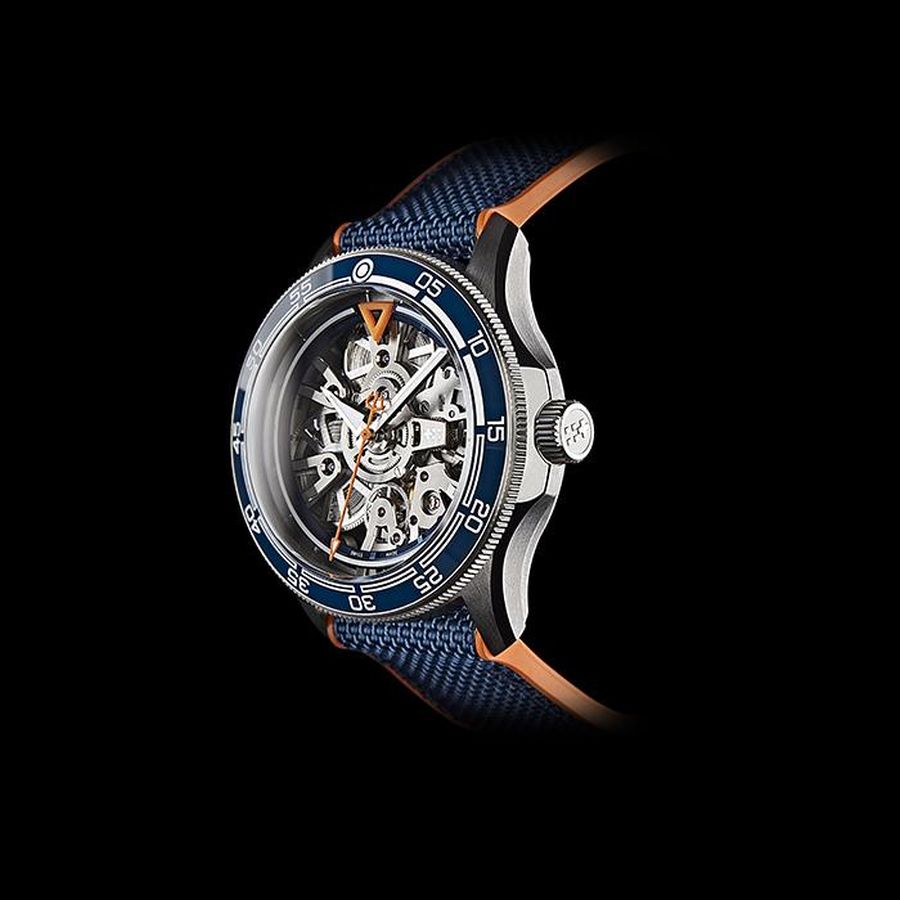