Wow, what a week eh? In the absence of big watch shows we have been treated to a more steady release watch brands than the deluge we see usually around Basel World and SIHH. Up until recently we didn’t even know if Rolex were going to make any announcements this year, but as we all know this past week they have occupied many a watch column.

Whilst many looked to see what the crown was doing; it was a different release that was getting us all a lather. Not so many weeks ago Mitch Mason Watches came onto our radar. It is no secret I am a bit of a field watch fan, but have found it rather a challenge to find one which stands out, so I could not help but be drawn to the brand’s first offering; the Chronicle.

Mitch Mason went live on Kickstarter 1st September and got fully funded in five mins (yes five)! It’s not often we get the chance to speak to a brand owner during a Live campaign, so we were delighted when Benedict spared a few moments in his busy schedule to do an exclusive QA with us. 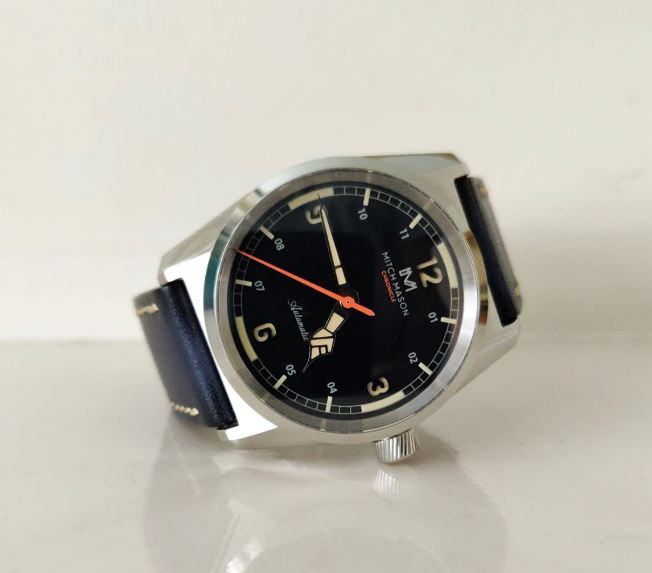 Ben thanks so for taking time out to speak to us, Most companies start out with a dive watch. What made you go for a field watch and was that a difficult decision to make?

When I set out to design the watch, I set myself 2 rules. 1) It must not be a diver 2) Every component must be as unique as possible. It was paramount to start on a strong footing and stand out in this saturated microbrand market.

I wanted Mitch Mason’s debut piece to be a daily beater watch and I think that doing a field watch was an easy decision. It ticks all boxes.

It seems you felt there was something lacking in the field watches available on the market. Do you think you have filled that gap and why?

I would not say that something was lacking in the field watches currently available. They’re all designed very well to serve their purpose. I saw it as a market gap within the microbrand watch world. Judging from many online comments through a couple of years, it seemed like people were yearning for something smaller in size, as well as something non-diver.

Yes, I do think that I have filled this gap to a small degree. I say so based on the positive feedback on the Mitch Mason Chronicle. The crowd decides if this gap has been. 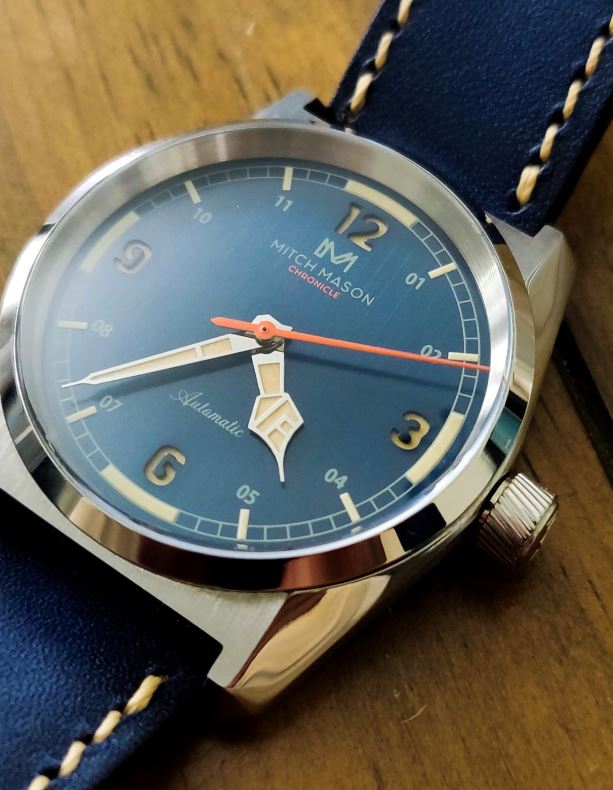 What is your favourite feature on the Chronicle?

It would have to be 2 things as I can’t decide between them.

First would be the handset. It is a totally original design. It carries the ethos of the brand. I am proud of it. More will be elaborated on in Question 5.

Second would be the lume. The lume-signature is unique to the Chronicle. The quarterly hour markers have extended bars of lume. It is designed to turn heads in the dark, haha.

You really nailed the proportions of the watch. Did you try other sizes or did you always know it was going to be 36mm?

As the theme was vintage, I wanted to go with something classic. And to me, nothing beats the Rolex Datejust 36. I own one, and I absolutely love the size, it’s perfect. The proportions of the Chronicle are similar to that. Nothing can go wrong.

It’s not often you see completely unique hands, how did you come up with that design?

The hands are designed to resemble a knot, which symbolizes the Mitch Mason desire to intertwine vintage elements with modern design.

A few people have said about some resemblance to Grand Seiko. What do you think of those comparisons?

They are right to make such comparisons. I have openly stated this as well in the Kickstarter campaign. The case design takes inspiration from Seiko’s “Grammer of Design” by Taro Tanaka, a design philosophy which I believe should be given more attention to.

I think the best part of this journey so far is to be able to engage with other watch enthusiasts (like you!). If not for this project, I would never have made so many new friends. Love it!

The most challenging part is to ensure that the project is progressing and managed well. As I am a one-person team, I am in charge of every process. Many of which I had no knowledge on. However, I am blessed to be in Singapore, where many other microbrand brand-owners have been kind enough to lend a helping hand and share their experiences with me. This saved me from making many serious mistakes.

Can you give us an insider’s view of what it feels like to be an owner on the eve of a Kickstarter campaign?

If you do not know, launching a Kickstarter campaign is done manually. You click on a “Launch now” button at the intended launch time. There is no automated process to trigger the launch. That alone should give you chills. Anything can go wrong. I’m just relieved that mine went smooth.

We would like to wish Ben good luck but he hasn’t needed it with the Chronicle smashing through 250% funded at the time of writing.

Available in four colourways and measuring 36mm the Chronicle is one of the most distinctive and well-proportioned watches we have had the pleasure of getting hands on with. If you want grab a slice of the action, you need to act fast, the campaign runs until 8th September. 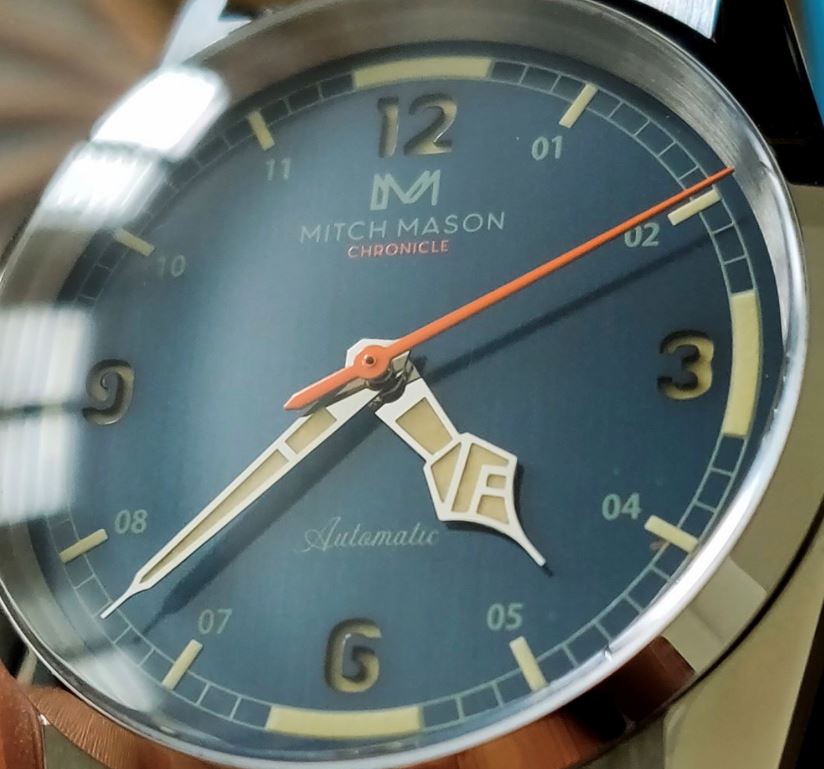 Speaking of smashing it, its that time again where we look over the last week’s Halfwatch Tuesday top picks. 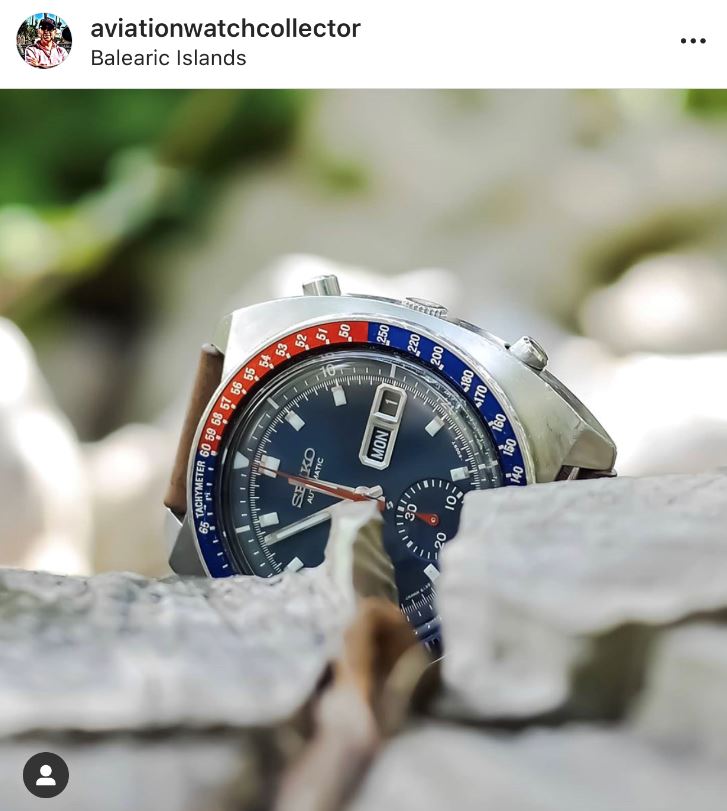 First up it’s @avianwatchcollector with that other of most iconic space chronographs the Pogue. 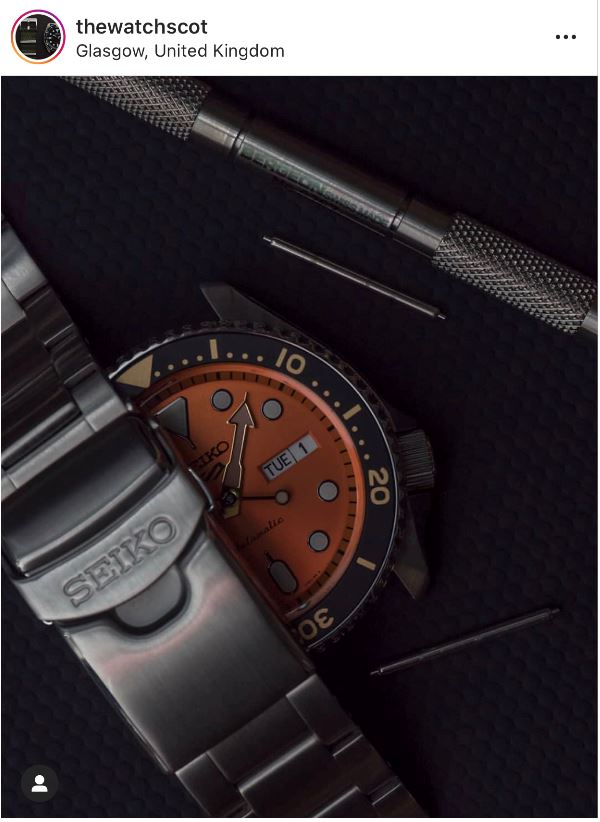 We love deep and moody, especially when it’s with a splash of Irn Bru, so @thewatchscot breezes into the tops picks this week with the 5KX 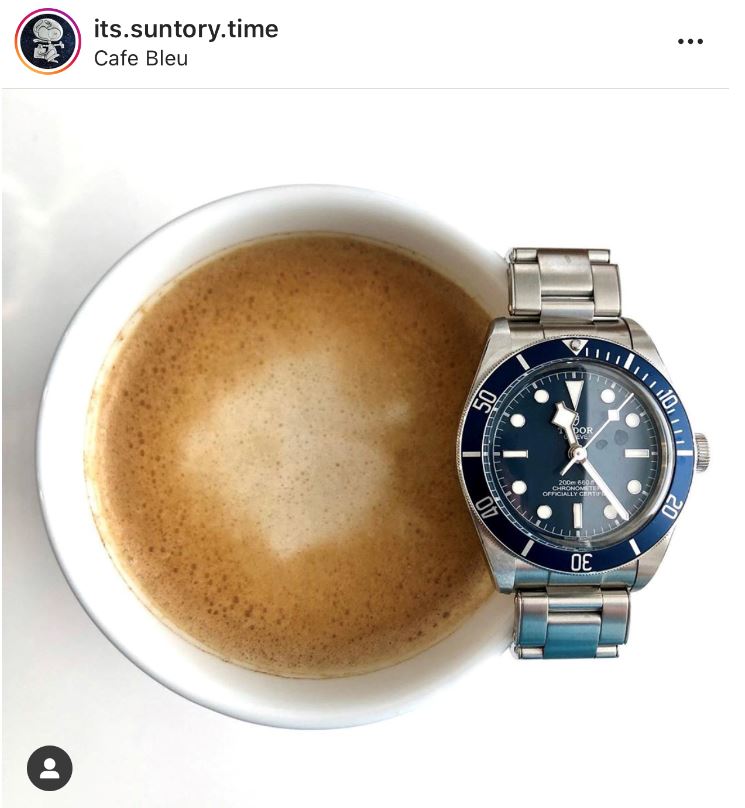 There’s been a lot of talk about blue watches, but this one shot by @its.suntory.time probably wins the category of ‘best blue watch 2020’ 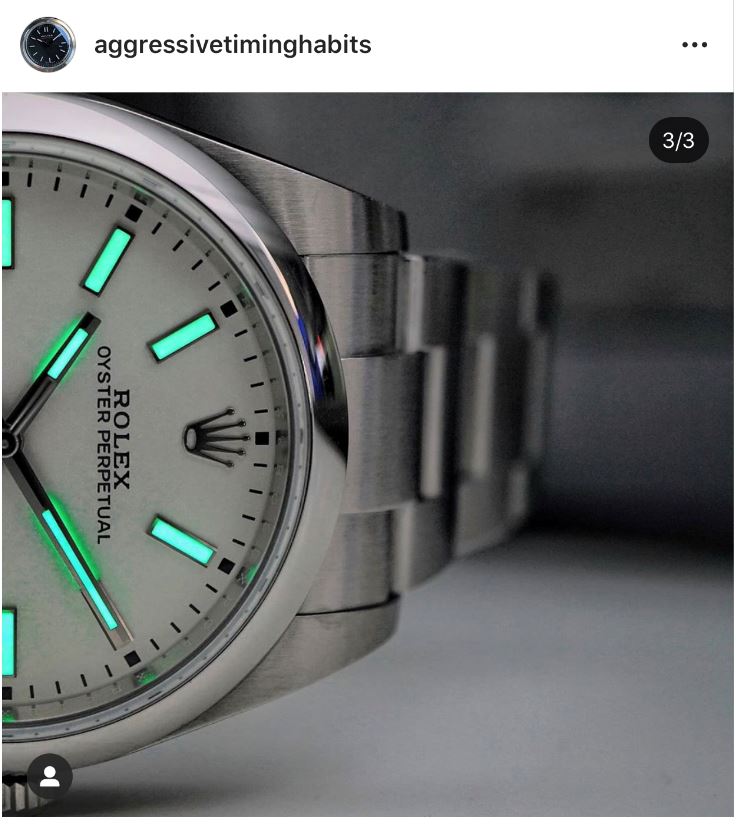 Now, not to bring the mood down too much, it is with great sadness we heard of a great loss last week, that of the OP 39. To have such an amazing everyday watch taken from us so soon has left us (especially me) crestfallen. OP 39, you had the rest of your life ahead of you, I mean just look at this shot of you, you were beautiful. Am I hurt? You bet your ass I am! Fair play to our pal @aggressivetiminghabits who is a proud owner of the great white. 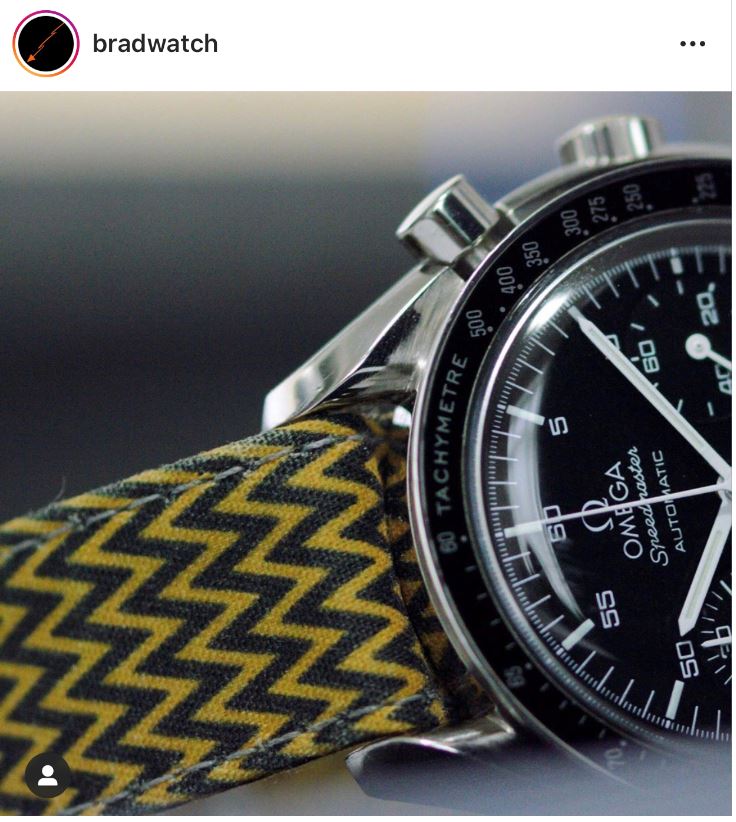 Ok back to the script, they say the speedy is a strap monster, our friend @bradwatch puts that to the test and succeeds. 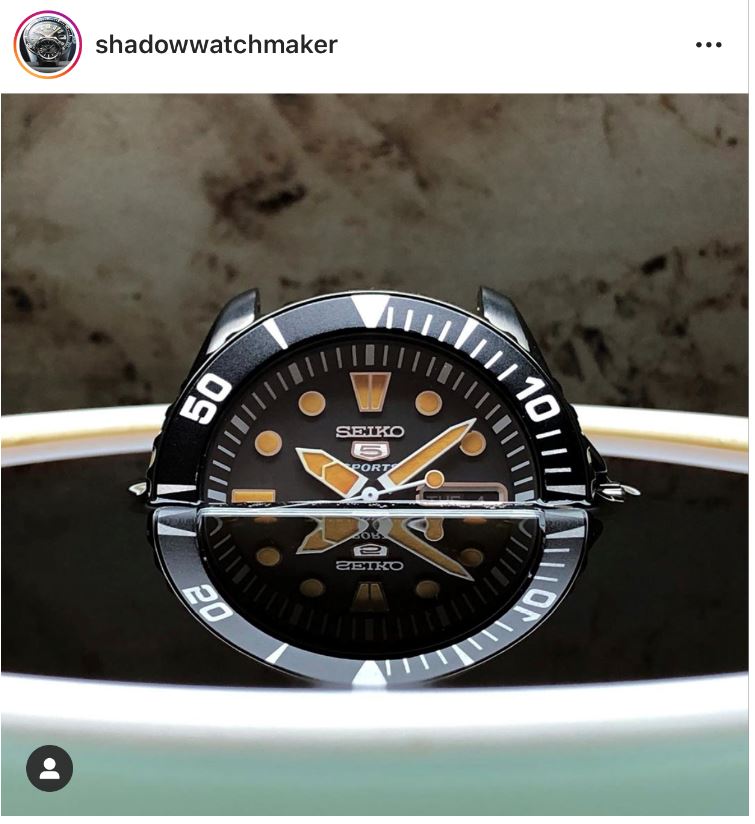 Last up, we have @shadowwakermaker with this bit of reflective magic!!

Before we go folks, we noticed we hit 16000 uses of the hashtags this week, truly mind boggling. As ever it’s all down to you, out community. We always want to be providing you more, so if there is any features you would like to see from us, just slide into our DMs. Hope you all have a great weekend and see you next Tuesday.