Often compared with the Omega Speedmaster, Bulova’s Lunar Pilot is a moon watch with a value proposition that’s out of this world. 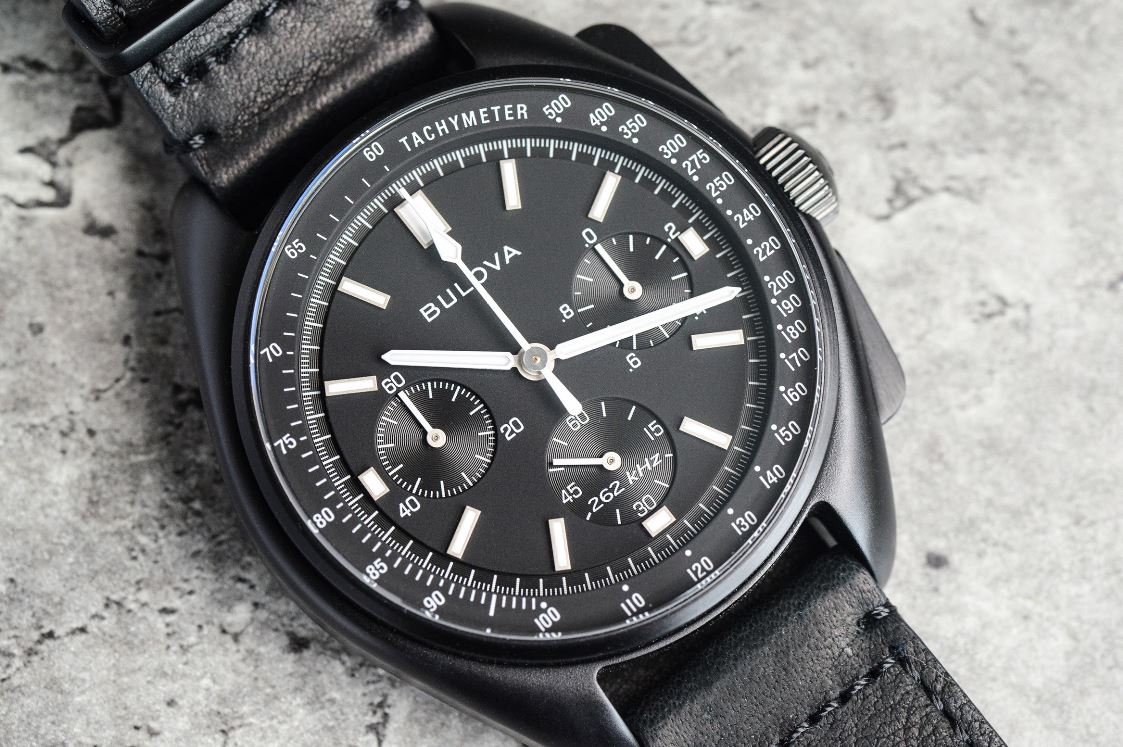 Just as Seiko is synonymous with sub-aqua adventures, Breitling has a long association with aviation and Rolex is known for….well, misunderstanding the economic concept of supply and demand, even those with a passing interest in horology will know about Omega’s long-standing connection with space exploration, and how its Speedmaster was chosen by NASA for the astronauts of the Apollo lunar programme.

A quick check of Wikipedia will tell you that the ‘Speedy’ was in fact worn in space for the first time in 1962, seven years before Apollo 11 blasted off, when astronaut Walter Schirra wore his personal Speedmaster aboard the Sigma 7 during NASA’s fifth crewed space mission, Mercury-Atlas 8.

Later the same year, NASA invited bids from a number of watch manufacturers, including Breitling, Bulova, Hamilton, Longines, Rolex and, of course Omega, to supply watches for use in space. After a rigorous programme of testing that subjected the watches to extremes of temperature, low oxygen environments, pressure, vibration and shocks, Omega was awarded the contract and NASA’s astronauts were duly equipped with Speedmasters.

The rest is history, as they say, and the Speedmaster Professional remains one of the only watches qualified by NASA for spaceflight and the only one qualified for Extra Vehicular Activity (EVA).

While I’ve long admired the Speedmaster Professional, I’ve never owned one. Mainly because I’ve never felt in a position to spend more than £5,000 on a watch, let alone the £7,000+ I’d need to part with for an Apollo 8, which is the one in the current Omega line up that excites me the most whenever I see it. I tried one on at the Omega boutique in Hong Kong Airport last year but quickly gave it back to the hopeful salesperson when I felt the temptation to buy it rising inside me like an inferno – a feeling that usually leads to a bout of buyer’s remorse and many years of credit card debt.

So with a birthday approaching it was with some delight that I recently stumbled upon the Bulova Lunar Pilot. 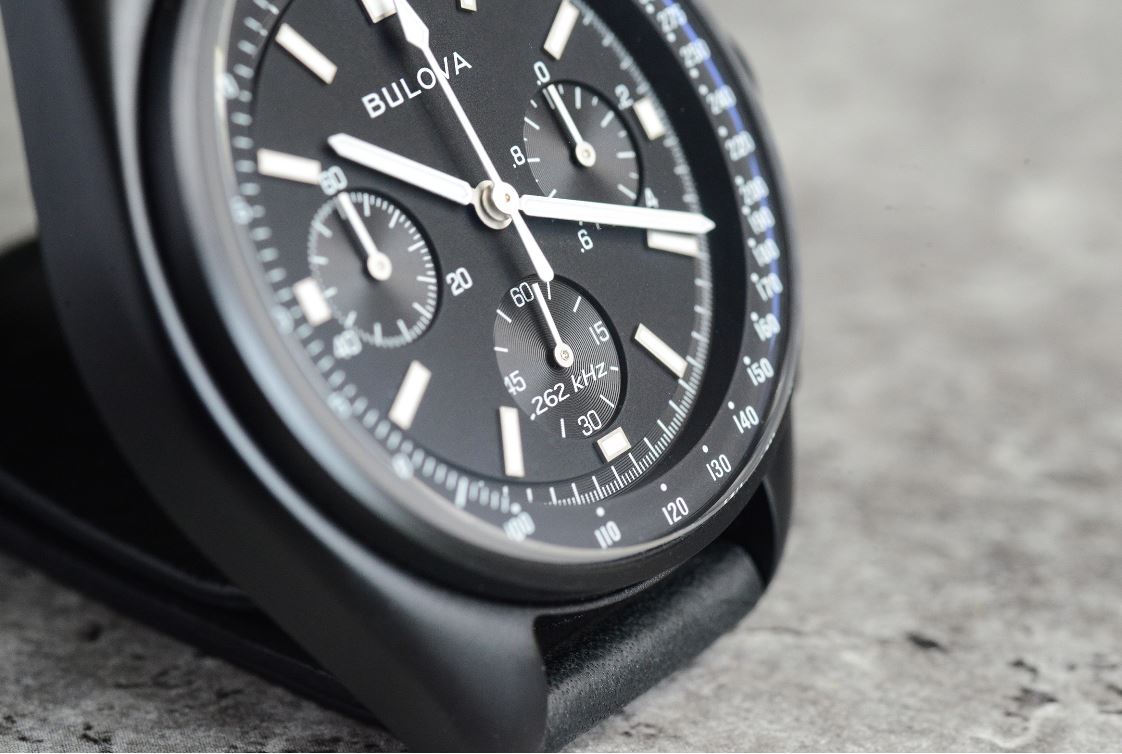 Bulova is a brand that I previously knew nor cared little about. Guilty of being a brand snob, when it comes to my watch hobby at least, the name had been almost fully erased from my consciousness and filed away in the ‘Argos catalogue’ category of watch brands (along with Citizen, who I’ve since learned to be Bulova’s parent company and another brand that I have new-found respect for).

I soon learned that while the Omega Speedmaster might be the official ‘moon watch’, it isn’t the only watch to have been used in lunar EVA. The Bulova Lunar Pilot is a reissue of a Bulova design worn on the moon’s surface by Colonel Dave Scott, commander of Apollo 15, on 2 August 1971.

Legend goes that Bulova had developed a new and improved design of the watch that had been rejected by NASA in favour of the Speedmaster, in the hope that it could persuade the space agency to reopen the tender process. When Bulova’s appeals proved unsuccessful, in a stroke of pure marketing genius it gifted one of the prototypes to Scott to take on the Apollo 15 mission as a spare. In a twist of fate, during his second EVA on the moon’s surface the crystal popped off his Speedmaster and he wore the Bulova for the third and final EVA, and for the remainder of the mission.

Whereas the NASA-issued Speedmasters remained the property of the US Government, Scott was able to keep the Bulova after returning safely to earth and it remained in his possession until 2015, when it sold at auction for an incredible $1.6m. Inspired by the interest surrounding the auction, later that year Bulova unveiled the Lunar Pilot as an updated reissue of the watch worn on the Apollo 15 lunar mission.

The Lunar Pilot was originally launched with a bead-blasted steel case, replicating the case finish of the ‘OG’ that inspired it, paired with a steel bracelet. In 2017 Bulova released the watch with a choice of either a tropic style leather strap or NATO strap, as well as a special edition with a matte black PVD coated case and hardware, supplied on a two-piece NATO-style leather band (perhaps Bulova’s answer to Omega’s ‘Dark Side of the Moon’?). The 2017 update also included two changes that become obvious when comparing the watch dial with the 2015 model ¬¬– namely the removal of the date complication and the use of the Bulova logo from the era. Both are small, yet significant changes in my opinion. 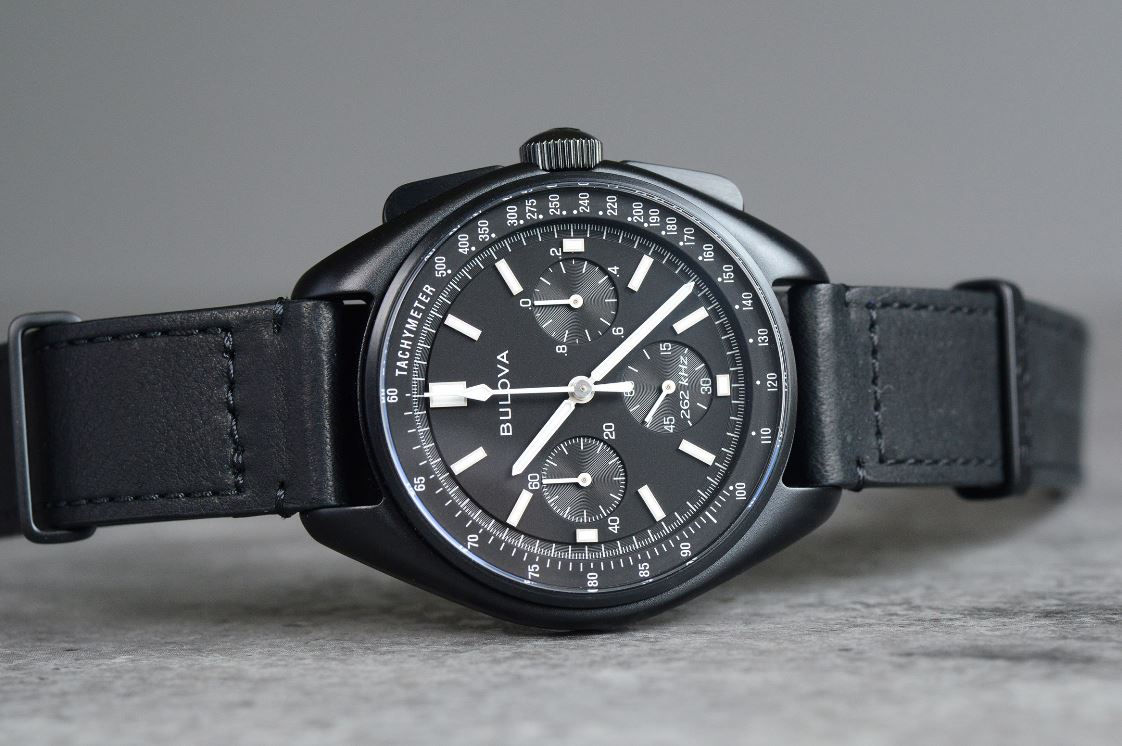 I opted for the black PVD version of the Lunar Pilot seen in the pictures. The watch comes in a black ABS moulded case lined with faux leather and, in additional to the usual instruction booklet and guarantee paperwork, there is a small card that gives a brief overview of the watch’s lunar credentials.

The aforementioned brand snob in me was apprehensive about the quality and finish of the watch as I unboxed it. I needn’t have been. The Lunar Pilot has a satisfying heft to it, weighing in at 115g on the two-piece leather strap, and the finishing on the case is comparable with watches in my collection that are ten times the price. I also use the word ‘heft’ as this isn’t a small watch. Its proportions – with a case size of 45mm, a thickness of 14mm and a lug length of 52mm – draw a lot of criticism from the watch community, and almost all of the reviews I’d read about it before pulling the trigger suggested that only those with the meatiest of wrists would be able to pull it off. So, as someone with wrists akin to a nine year old girl, this was undoubtedly a concern. Fortunately, on the wrist the Lunar Pilot doesn’t feel ridiculously large to me – who knows, maybe the black PVD finish creates some sort of optical illusion – either that or I’ve just convinced myself that it looks fine. 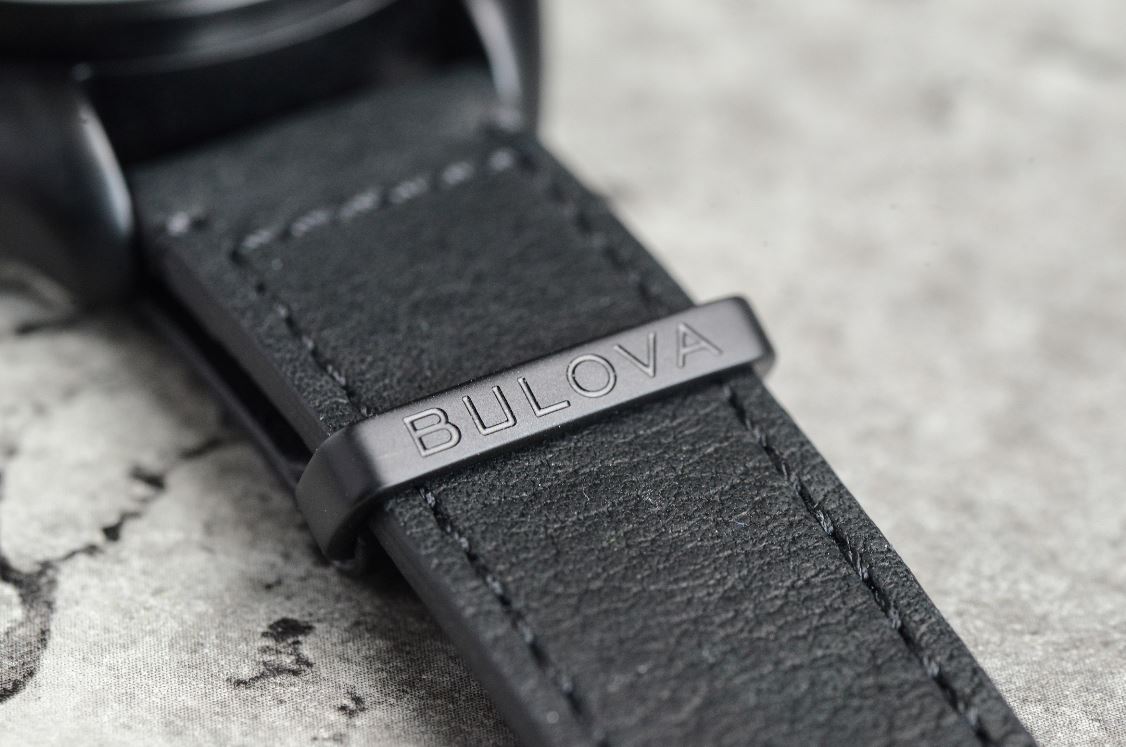 Underneath the box crystal which sits proud of the bezel and adds to the watch’s retro looks , the design of the dial bears a remarkable resemblance to that of the Speedmaster. The three sub-dials are arranged in the familiar formation – there’s a one-tenth of a second sub-dial at the three o’clock position, a sixty-minute counter at nine o’clock and a running seconds sub-dial at six o’clock – as well as a tachymeter scale around the bezel, albeit under the crystal rather than outside of it. Those amongst us whose favourite day of the week comes immediately after Monday would probably call it a cheap imitation – and it would be hard to argue with them. After all, the Lunar Pilot costs around a tenth of the price of a Speedmaster Professional, so it’s certainly cheap-er. However, rather than the Lunar Pilot being a cynical attempt by Bulova to cash in by creating a facsimile of Omega’s most successful model sixty years after the Speedmaster was originally conceived, one look at Dave Scott’s original Bulova prototype will tell you that if Bulova is guilty of plagiarism, it probably occurred when the Speedmaster was in its infancy, way before it achieved the iconic status it has today. Some have also suggested that NASA issued a very tight specification to the companies that bid to become the official watch supplier to the Apollo programme, allowing little scope for originality. The Lunar Pilot is certainly a faithful reproduction of the original Bulova prototype worn by Dave Scott, which itself may or may not have taken influence from the Omega design that pre-dates it. The Lunar Pilot’s elongated pushers also hark back to the original Bulova design, being intended to provide a larger surface area so that they could be operated easily when wearing thick gloves. 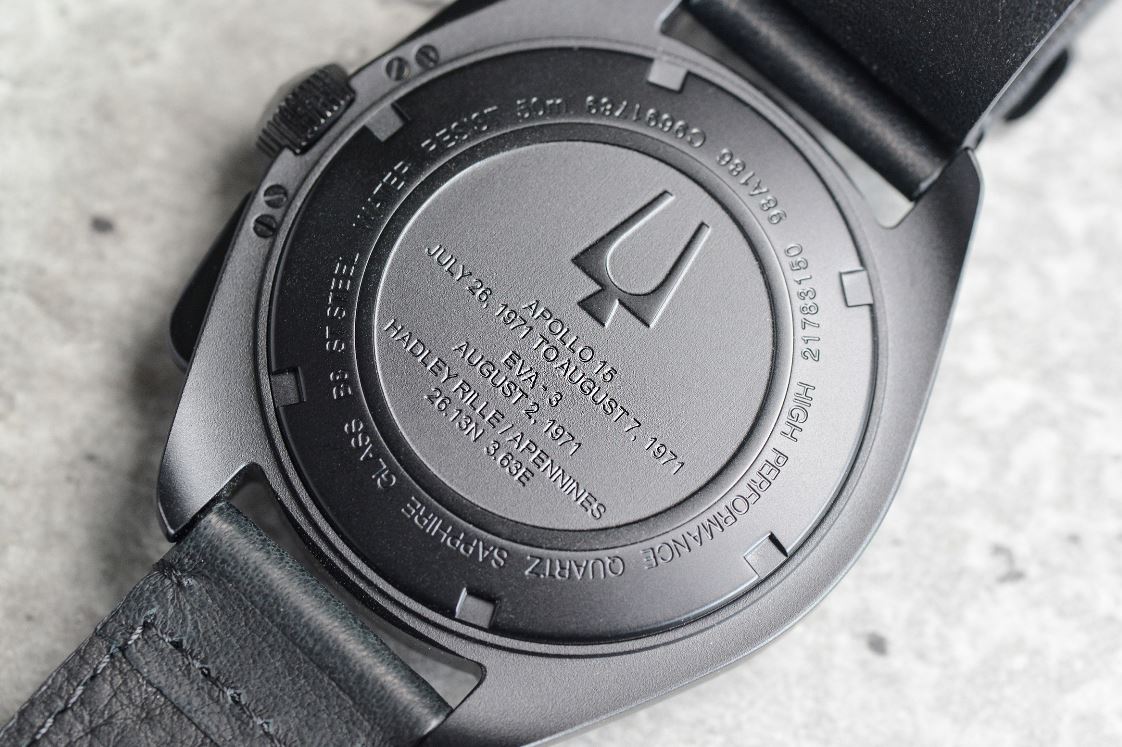 Comparisons aside, the dial of the Lunar Pilot has a wonderfully three-dimensional design, with recessed sub-dials and a trench around the outside of the dial containing the one-fifth of a second scale, together with applied markers and that tachymeter scale, which sits above the dial but below the crystal, adding to the multi-dimensional look.

The two-piece leather NATO strap folds back to reveal an engraved case back bearing the dates of the Apollo 15 mission, as well as the date – and precise lunar coordinates – of the third EVA, just in case the wearer fancies a trip up there to see where it all happened perhaps. From the pictures I’d seen of the strap I was expecting it to feel cheap and stiff, and I was convinced that I’d need to order a good quality NATO to pair with the watch. I was wrong. The strap is one of the best I’ve worn, being made of very supple leather that moulds perfectly to the wrist.

Unlike the original Bulova prototype worn on the moon by Scott, inside the Lunar Pilot’s case is a quartz movement, something I deliberately avoided mentioning until now for fear that you might not have read any further. Admittedly, had this been just any quartz movement I may have thought twice about adding this particular piece to the collection. However, the Lunar Pilot uses Bulova’s high accuracy quartz movement which oscillates at 262mhz ¬– a much higher frequency than most of its quartz and automatic counterparts. It’s probably one of the most accurate movements on earth, aside from those that receive a daily signal from the atomic clock, and whereas most quartz movements have a variance of around +/- 10 seconds a month, Bulova’s 262mhz movement is accurate to within +/- 10 seconds a year. That’s Seiko Spring Drive levels of accuracy.

The black PVD version of the Lunar Pilot has a retail price of £500/$595, however I picked up mine from an authorised retailer online for a little over £350. Even at its retail price I think it offers exceptional value for such a beautifully made watch with an innovative movement and a chronograph complication, let alone a reproduction of a watch with such an interesting history and genuine lunar credentials.
The Lunar Pilot will always be eclipsed by the Speedy but I, for one, am over the moon with it.