The day when Revolution and Hanhart introduced a new and exciting limited edition collaboration, I received my first Hanhart watch via courier. Though Hanhart is especially known for their Chronographs – I opted for a Pilot style. The watch was purchased full retail price by me – Hanhart was not aware I am writing a review about it. 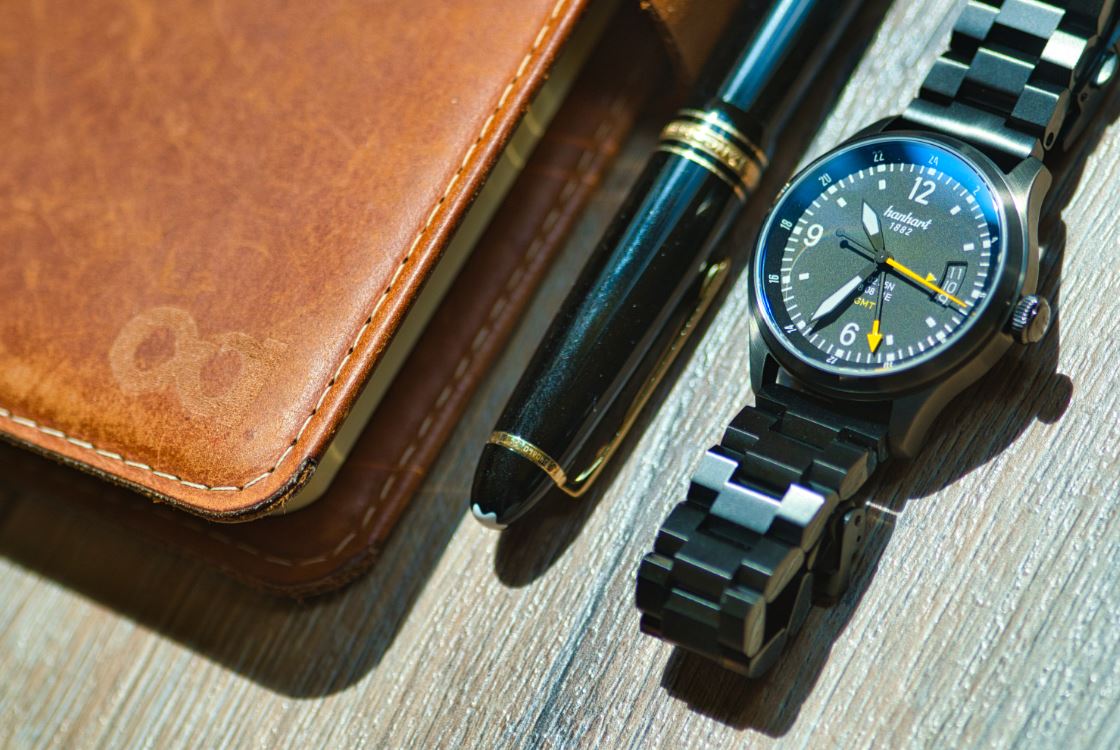 Brief History of Hanhart (please check out the entire history on their website – it’s worth a read):

Hanhart is a Swiss-German company founded in 1882 in Diessenhofen, Switzerland. They relocated to Germany in 1902 and even within Germany they opened over the years new production facilities in the Blackforest area and eventually moved to their current headquarters. Hanhart was known for their stopwatches – they became the largest producers of mechanical stopwatches in Europe by 1962. Hanhart started producing wristwatches early on and developed a few in-house calibers during the years. Of particular interest to me is the complete in-house developed quartz movement released in 1972 – quite a technological feat that must have been. Hanhart in 1957 also provided the German Luftwaffe (Airforce) with Chronograph watches as well as the German Bundeswehr (Army) with a flyback Chronograph. Hanhart has a very distinct feature they became famous for and this is the red push button for their Chronographs. It became one of their trademarks and most of their watches have some “nod” to it in their design.

History of the SK-60

My watch is inspired by the Swedish Saab SK-60. A set of three watches, inspired by this plane’s cockpit instruments, was created for the 50th anniversary of this particular plane being used in the Austrian Airforce. Let that sink in – this plane is used in the Austrian Airforce (named Saab 105 OE, the Austrian version of the SK-60) for 5 decades. Production of this aircraft stopped in 1972. The Austrian version has upgraded engines delivering almost twice as much thrust than the original SK-60. From the 40 planes bought initially 12 are still in service in Austria today. Its role is mostly to be a training jet.

There are a few things cockpit instruments need to excel in, foremost legibility, clarity, reliability and quality. The best instruments are of no use if they can’t be read clearly and quickly. Following this philosophy, the instruments need to be easily readable in bright sunlight and in pitch black darkness. The black dial in conjunction with the white hands and indices ensure the maximum contrast possible. The watch follows mostly the standard Flieger /Pilot design philosophy. The SK-60 GMT version adds a splash of colour with the Second and GMT hand having nice warm yellow accents.

Both the SE-105 GMT and the SK-60 are, as the name suggests, GMT watches so they have a special 24 hour rehaut. The 24 hour part is fixed so the watch is limited to track two time-zones. Based on the ETA2893-2 or Selitta SW330-1 (I guess the luck of the draw) you can manipulate the GMT hand with the crown pulled out in position 1 turning it clockwise to advance the GMT hand by one hour and counterclockwise to quickset the date forward by one day. 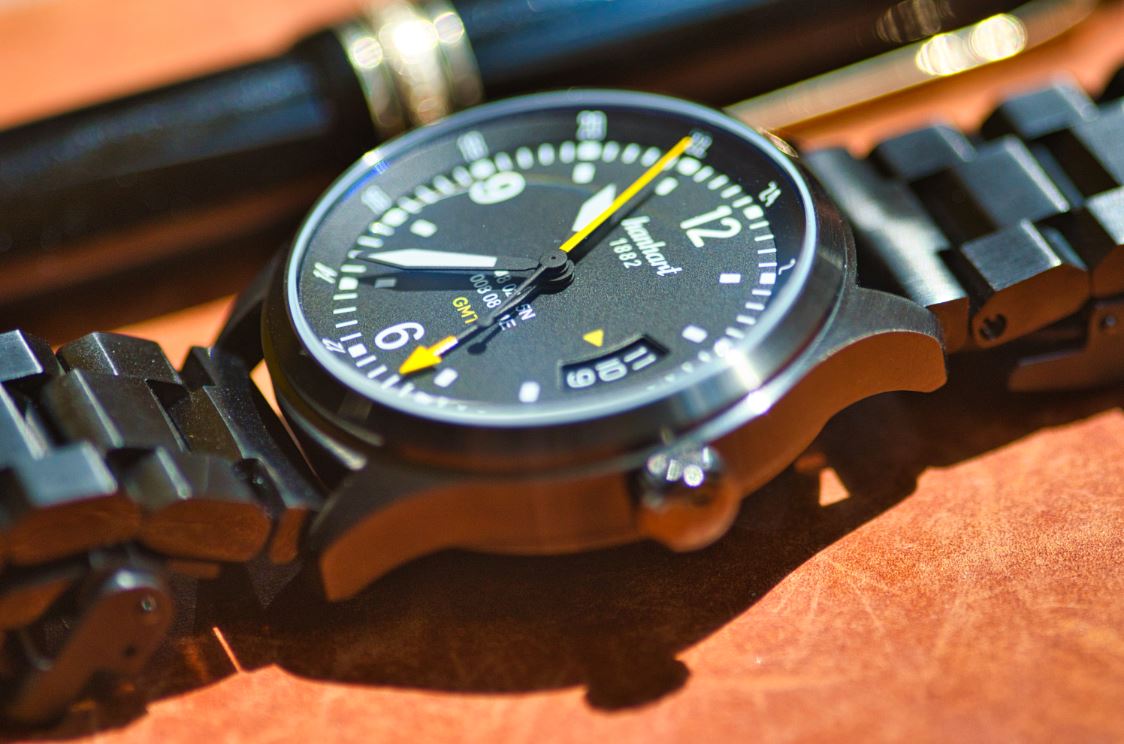 The SK-60 is not what in the watch world is called a “true” GMT where the wearer actually adjusts the hour hand to the local time and leaves the GMT hand on home time.

Example: you travel to a time zone that is 2 hours behind your home time:

You would like your GMT hand to indicate the time at “home”. With a ETA2893 based watch you will have to pull out the crown to position 2 – the movement will be completely stopped. You set the time backward by two hours to reflect your current time zone, if you want second precision you will need to synchronize the watch with a reference time, then you push the crown into position 1 to advance the GMT hand. The GMT hand will have moved in conjunction with the hour and minute hand and also be on the same time (2 hours behind) so you would need to advance the GMT hand by two hours and then you are set.

In a true GMT movement the first stop does not hack the movement either but you can move the hour hands only to the desired new current time, including the date that will switch forward or backward if you switch over midnight. Usually watches have a “no set zone” for the quick date from 10pm-2am but for true GMT watches this is not an issue. You can adjust your current time zone including the date and be set – the GMT hand will still show your home time. Also – the second hand won’t need to be reset as the movement was not “hacked” and is still in sync with the reference time. A true GMT makes time zone changes easy and quick.

Nearly black – the case of the SK-60 is a PVD coated steel in a classic 40mm diameter. Slightly domed Sapphire crystal, a solid case back with the engraving of the Saab SK-60 and no crown guards. The lug width is 20mm and the Lug to Lug size is a short 46mm. The watch measures 12mm in height and is waterproof (without screw down crown) to 10ATM = 100m.

The watch comes with a very nice quality black calfskin leather strap with black stitching and with a pin buckle that is like the case, PVD coated. 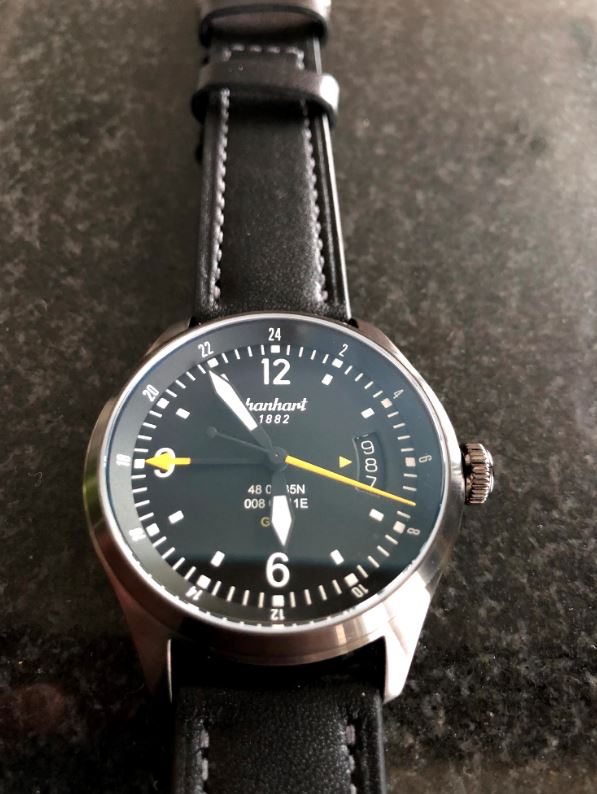 Perfectly sized crown for the case, not oversized and no onion style as with other Flieger watches – I like it. It’s signed with the Hanhart “h” and has plenty of grip for easy operation.

24 hour rehaut with Arabic numerals at 12, 6 and 9 – logo at 12 o’clock, a date window at 3 o’clock showing the current date in the middle and before and after in the large cutout (so with the broad hand covering the current date you can still extrapolate the date seeing the day before and after) with a yellow triangle pointing out the current date. Between the center and 6 o’clock we have a set of coordinates (I let you figure out where they might lead you) and beneath a yellow “GMT”. There is a minute rail under the 24 rehaut and another set of hour indices. 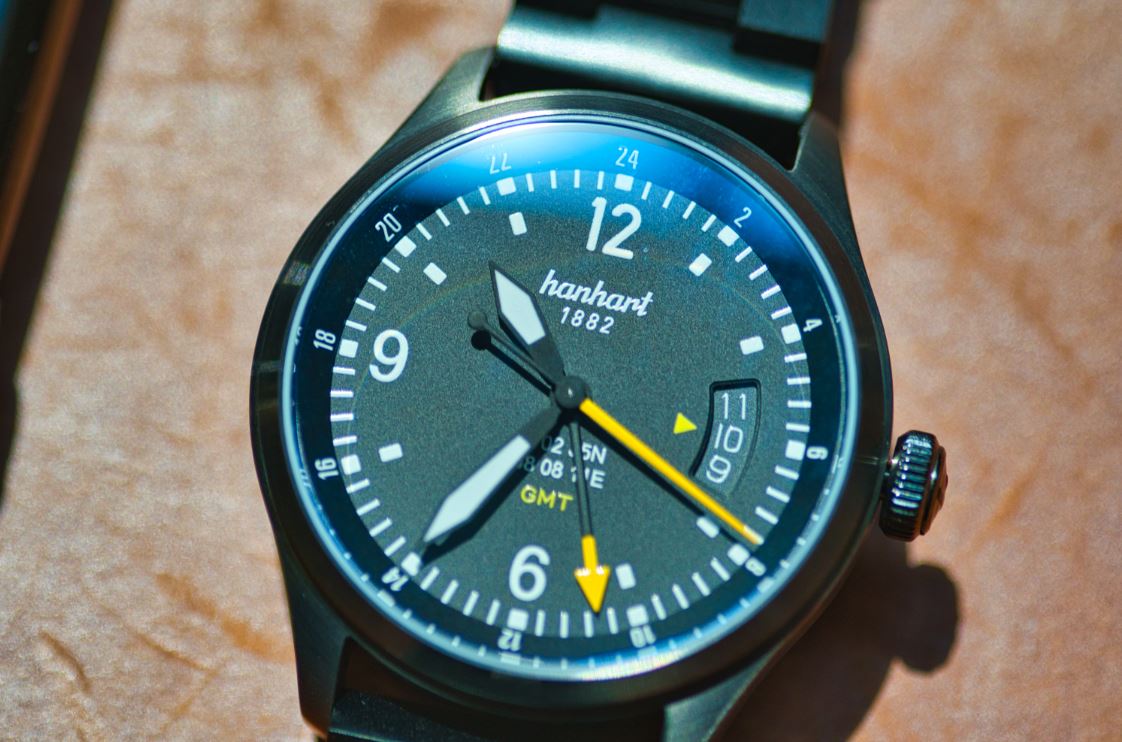 Very comfortable – thanks to the short lug to lug measurements. Actually this watch wears smaller than my last acquisition the 39mm Tudor Black Bay 58 blue – which is strange as the Tudor is a millimeter smaller in diameter but even seeing them side by side, I can’t help and think the Tudor is larger.

I swapped the excellent leather strap to a strapcode 20mm Hexad PVD black bracelet and that certainly helped to give the watch a bit more “presence” on the wrist.

The look of a black watch on my 19 cm/7.5 inch shows classic proportions– this is my only entirely black mechanical watch except the Swatch Hodinkee 1986 edition and I can see this looking especially good on smaller to normal size wrists. 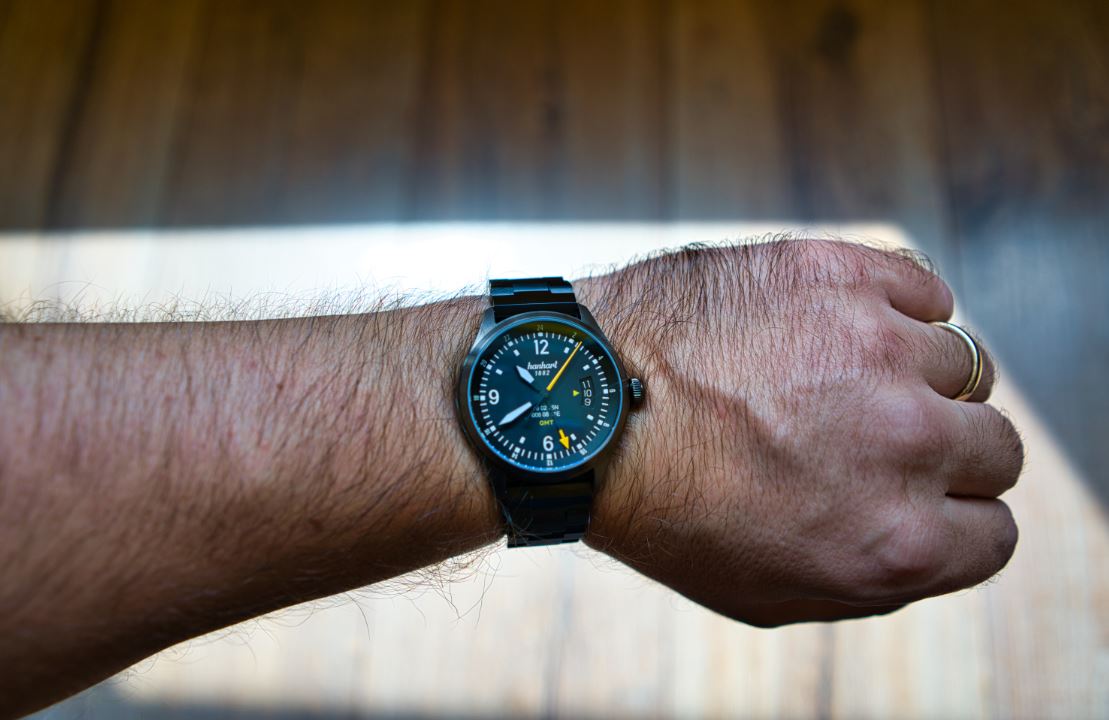 The way it arrives at your home is exceptional for the price point. A cool outer box, racing themed. You get some catalogs, warranty booklets and card, a handwritten spec sheet by the watchmaker that assembled your watch (thank you Mr. R. Mueller!!) another inner cardboard sleeve that unveils another solid box including a leather watch roll with some soft inner lining with your watch. I must admit – this is the best packaging I have seen for a watch of this price! 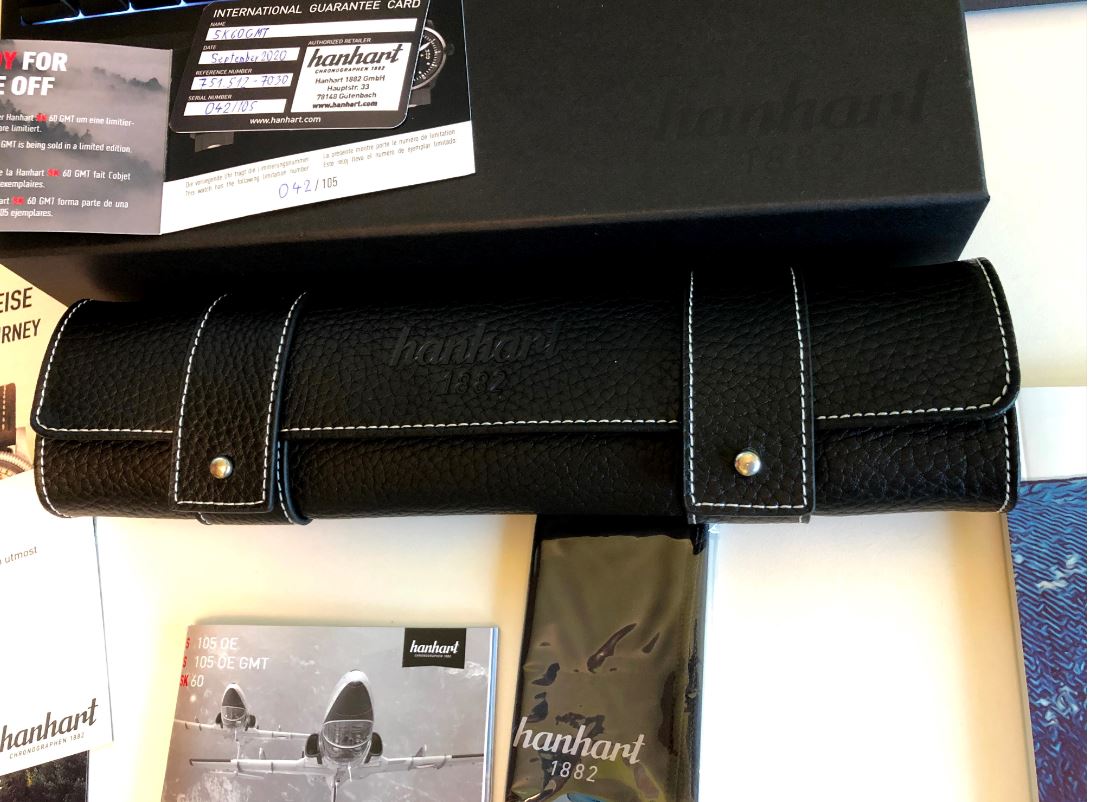 What could be better:

I have a few little niggles with the watch (though I overall really enjoy it). One is the small space between watch and case. I feel that could be reduced. I would have loved to see some lume on the second and GMT hand but understand that the beautiful yellow colour would probably not possible with lume. Overall the lume, while being Super-Luminova seems a bit on the weaker side, maybe another one or two layers would have been good. However it is sufficient but not excellent.

Value for money is very good. You get a robust pilots watch from a brand with 134 years of heritage and plenty of innovation under their belt. For a Flieger/Pilot watch it is on the smaller side, very similar to the current production IWC Mark XVIII – but it’s clear, easy to read, sturdy, toolish and most of all fun. The yellow second and GMT hand and the other small yellow accents on the dial stand out and make this a cool watch to look at. The leather strap is comfortable and of excellent quality with a nice Hanhart branded buckle.

I am very pleased with my purchase and happy to recommend this limited edition watch to everyone looking for a unique GMT Pilot watch that can be worn daily.

At the time of writing there were still around 18 watches available – so better hurry to grab one of these if you fancy. You can find Hanhart watches here: www.hanhart.com/en/ 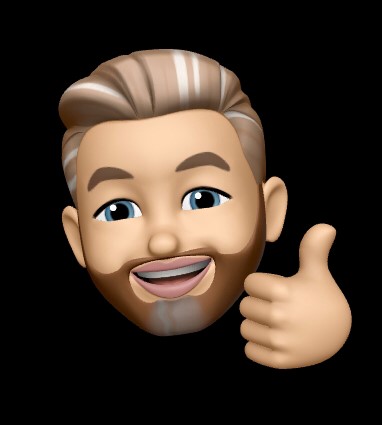