There is no shortage these days of brands making vintage-leaning, aviation-inspired timepieces. As companies dig deeper and deeper into their back catalogs for inspiration, more and more watches inspired by a time when they were a crucial tool come to the forefront. Few brands, though, have gone all-in like the UK’s AVI-8; it’s right there in the name! 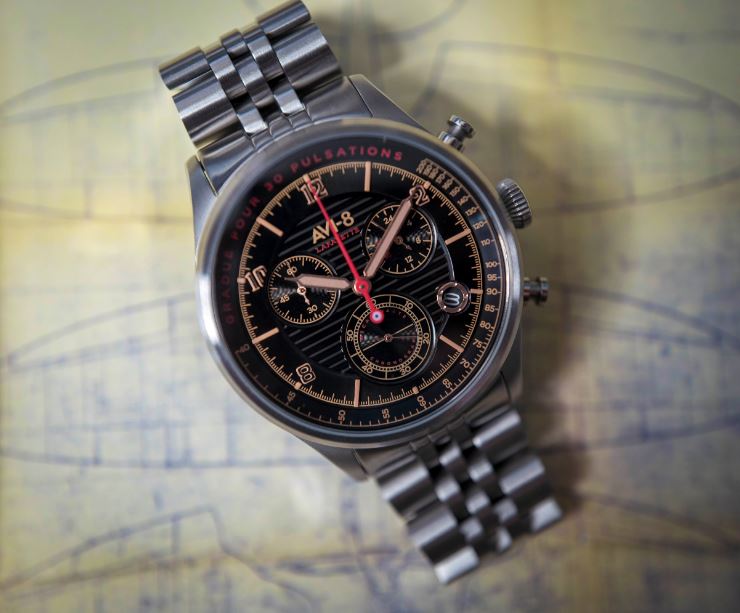 Started in the mid-2000s by a company called Dartmouth Brands, who own Spinnaker and a number of other watch brands, the inception of the company is a little murky and they did not respond to requests for more info. What we do know is they have put out a steady stream of quality, affordable, heavily aviation-inspired watches. Many are inspired by actual airplanes, such as the Hawker Harrier, Spitfire and P-51 Mustang, and others, like the Flyboy Lafayette Chronograph we are looking at today, are inspired by aviation stories. 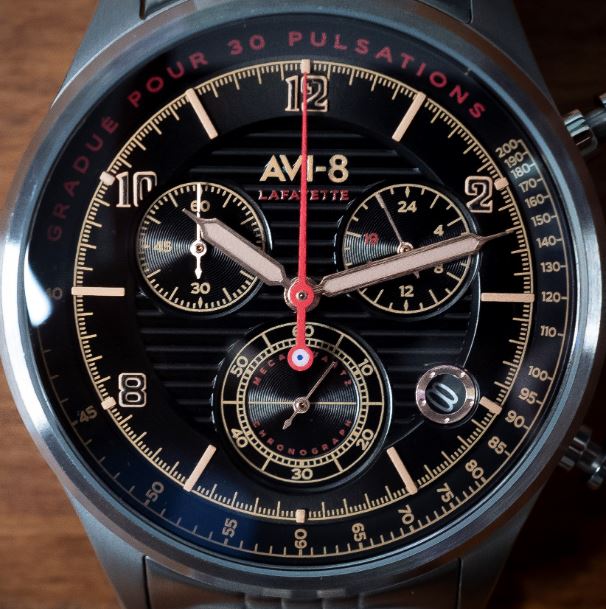 Before the United States officially entered World War I on April 6th, 1917 with a declaration of war against Germany, American sympathy for the Allies was already running strong. One of its most famous manifestations was the Lafayette Escadrille, a group of volunteer American pilots flying with the French Air Force, which formed a year earlier in April 1916 as Escadrille Américaine. This name was protested by Germany, as America still remained neutral at the time, and was changed to Escadrille Lafayette, escadrille being the French word for squadron. It was the brainchild of two men, Norman Prince of Boston, Massachusetts, an American expat already flying with the French, and Dr. Edmond Gros, the director of the American Ambulance Service, also living in France. Wanting to aid the Allied cause and drum up publicity for the war effort back home, they lobbied Parisian officials to create an all-American corps of pilots within the French Air Force. Their fame and propaganda value most likely exceeded their actual impact; the 38 volunteer pilots downed 57 German planes in 20 months of service–a solid, if unspectacular, effort–before being absorbed into the U.S. forces as the 103rd Pursuit Squadron. Having been referred to as “the founding fathers of American combat aviation”, these pilots and others in the French Air Force and the fledgling U.S. Army Air Service helped create the culture of the fighter pilot that lives on to this day.  AVI-8 has created a watch inspired by, and in honour of, these trailblazing pilots. 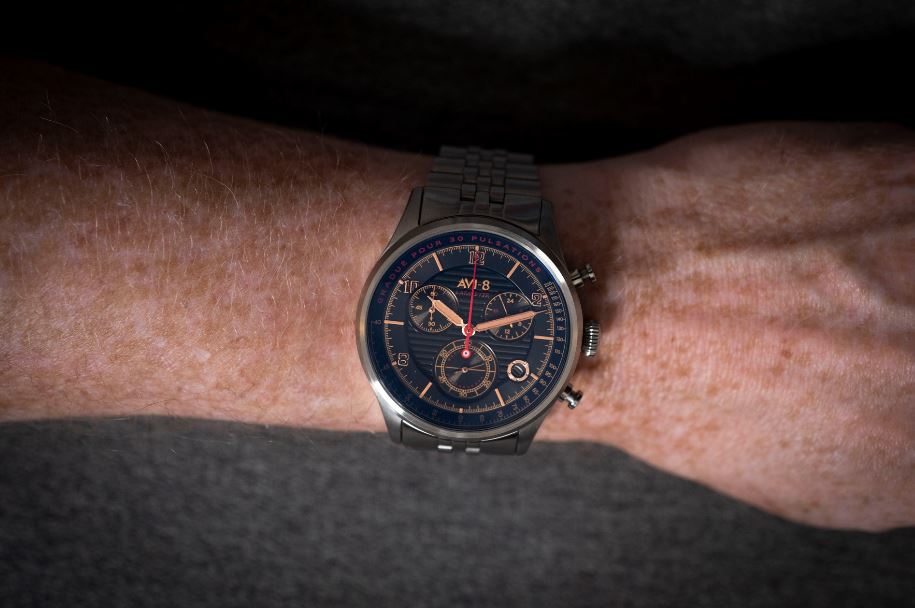 The Flyboy Lafayette Chronograph’s 42mm case has a nice combination of brushed and polished finishing, with a well-proportioned (something that seems to be a challenge for some “pilot” watches) onion crown and two piston chronograph pushers. The 14mm thickness is a little bit more than I would want from a mecha-quartz powered chronograph, with a movement thickness of only 5mm, but overall it fits with the larger pilot watch theme nicely and isn’t noticeable at all when wearing. 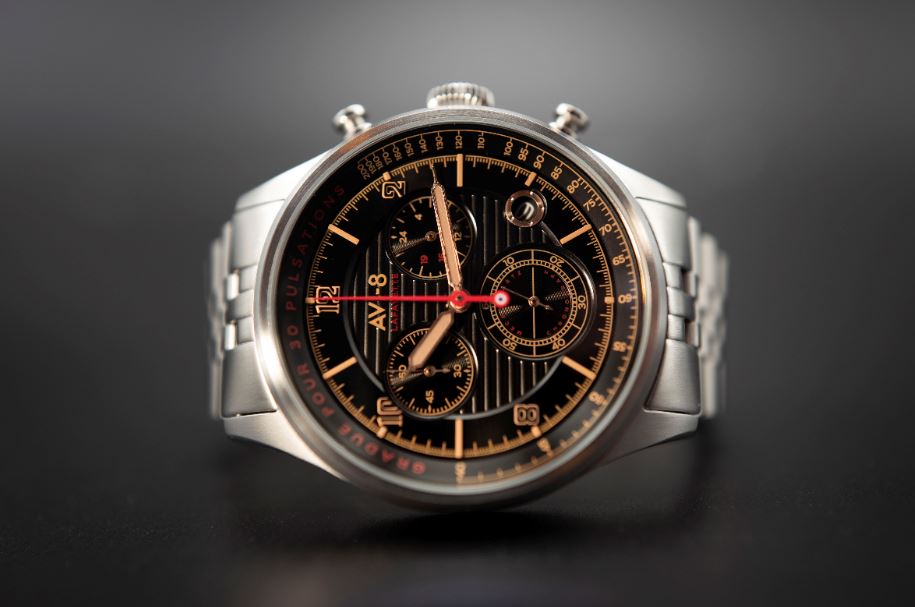 The domed, hardened anti-reflective mineral crystal protects the dial of this watch, which contains more levels of depth than I think I have ever seen on a watch at this price point. There are no fewer than five levels here, making for a very interesting, if somewhat confused dial to look at. There is a pulsometer around the outer edge of the dial, in case you need to check your pulse during a heart-racing, Red Baron-style dogfight. The even-numbered hour markers are applied numerals in a nice looking, art-deco-inspired font. The 10 and the 2 are slightly cut off to make room for the next level of recession, and not cut off evenly, which drives my OCD a bit mad. The next level down is an interesting ribbed pattern, said to be inspired by the wing pattern of the Nieuport 17, a French aircraft flown by many members of the Escadrille. Below that are the three subdials, a 24 hour dial at 2 o’clock, running seconds at 6 o’clock, and 60 minute counter at 10 o’clock. Another small design anomaly I might have changed is that some of the dial text is in French (“Gradue pour 30 pulsations”) while others are in English (“chronograph”), though maybe that is to signify the cooperation between French and English forces and I’m just being nitpicky. The 24 hour subdial has the numbers “19” and “16” highlighted in red, to commemorate the year the Lafayette Escadrille was formed, which is a nice, subtle little touch. The caseback is engraved with the Indian head insignia of the Escadrille found on the Spad VIIs and other aircraft. There is a porthole-style date window at 4 o’clock that’s an interesting aesthetic touch. The lume on the markers and syringe-style hands, however, definitely leaves something to be desired, and is very hard to make out in the dark without being fully charged with a flashlight. But if you have a flashlight, what’s the point?

The Flyboy Lafayette is powered by the Seiko VK64 Meca-Quartz movement. If you don’t know what these movements are you can find all the info you would ever want here, but the short version is: it’s a movement that uses quartz technology for the watch’s timekeeping functions and a mechanical module for the chronograph functions. The result is a chronograph with a much more pleasing, tactile feel than a standard, all-quartz chronograph. It also resets instantly, unlike quartz chronographs that have a weird “let’s take the longest, slowest path around the dial back to 12” tendency that is fun to watch approximately one time. 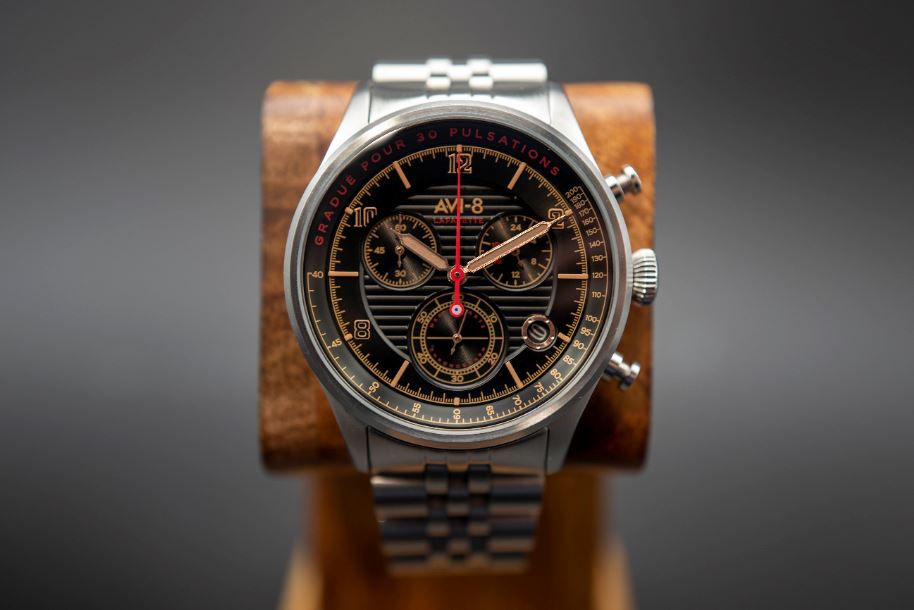 An interesting, and some might say random, addition here is the inclusion of a jubilee-style bracelet. AVI-8’s press materials admit that a circa-1920s pilot watch would not have come on a metal bracelet at all, but it does fit, both aesthetically and functionally. Maybe those 1920s pilot’s watch designers missed a trick. I do have to say this is probably the best build quality of a bracelet in the sub-$500 category I have ever seen. Very solid and not jangly or cheap feeling at all, with a pleasing 22mm-18mm taper that fits in very nicely with the whole package.

With an excellent overall build quality, solid workhorse movement, a very interesting dial and even more interesting inspiration, the Flyboy Lafayette Chronograph represents an excellent value for anyone in the market for a Pilot-style watch steeped in aviation-inspired design and lore. Available now £225 AVI-8