This is definitely all Casio’s fault! 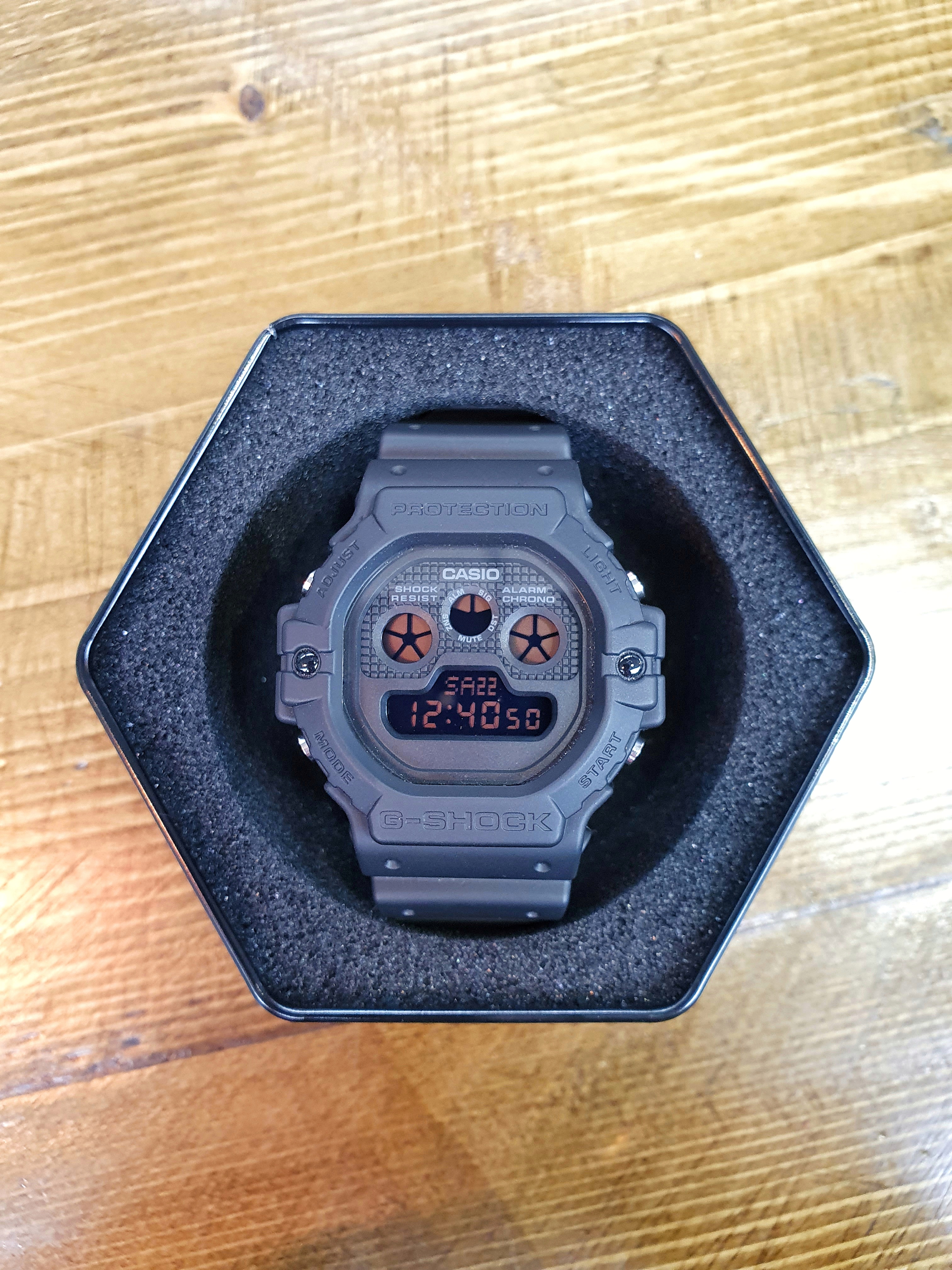 I’ve been seriously into watches for about 2 1/2 years now. That was the point when my interest in them became, whatever this is now for me.

But it’s safe to say the hooks are in deep. You know you’re in trouble when you start thinking up reasons to justify buying the next watch on you’re ‘short’ list, other than the fact you like it.

Or you’re buying more watches than is perhaps sensible, but you don’t seem to be stopping.

Or you’re finding ways to wear several pieces in one day. 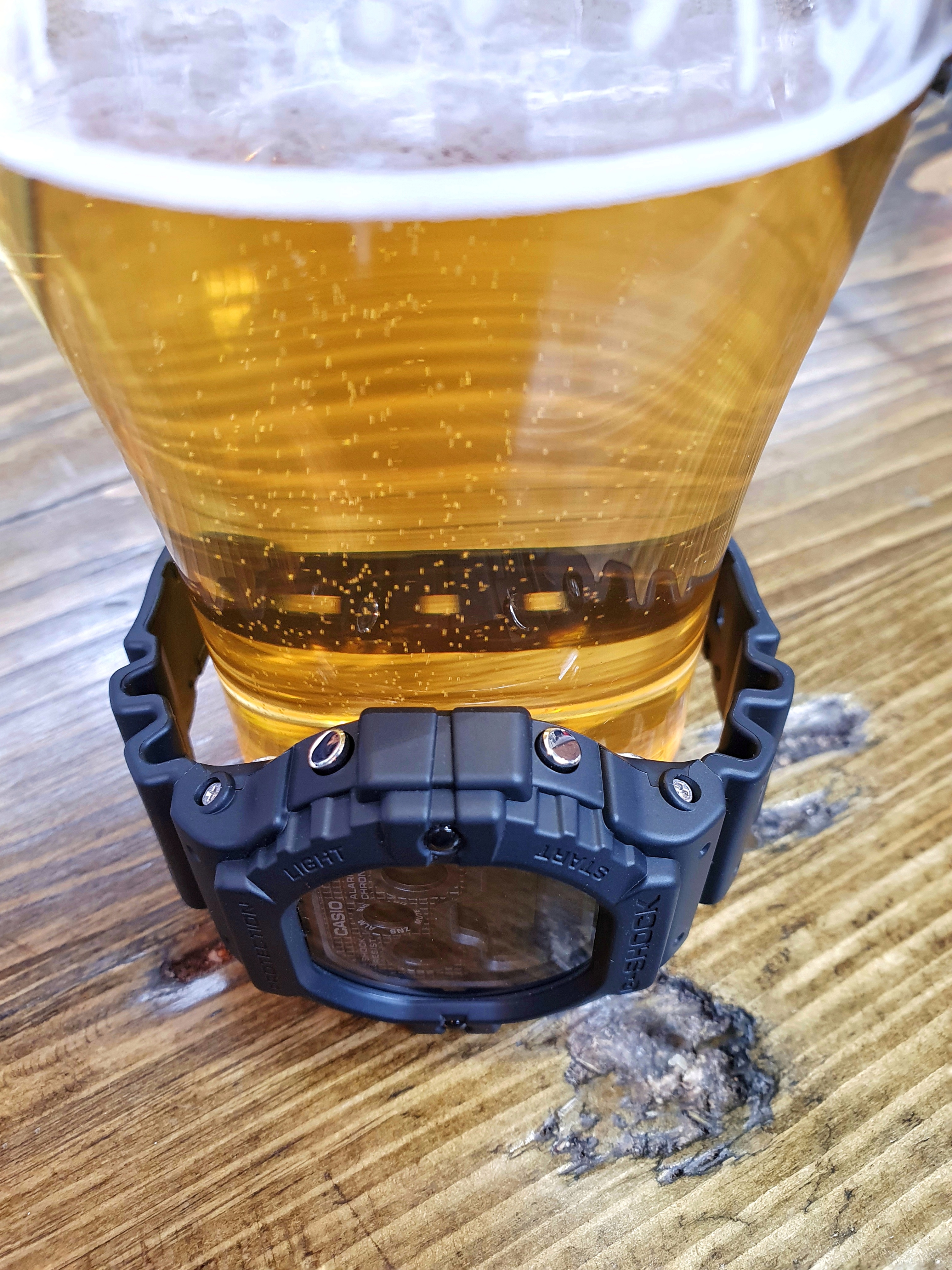 Ridiculous! But how many of you reading this are smiling to yourselves, because it all sounds very familiar. It’s just some of the symptoms of being a W.I.S. It’s a bit silly really isn’t it?

One wrist, trying to find time to wear everything in the collection. But it’s a lot of fun.

For me, at 42 and a child of the 80’s, Casio’s where this all started. I remember as a kid ‘window licking’ the glass of the display cases in my local H Samuel every opportunity I could. Always at Casio. They were just so damn cool! The staff at H Samuel moved me on again last week. I really wish I’d grown out of that habit. 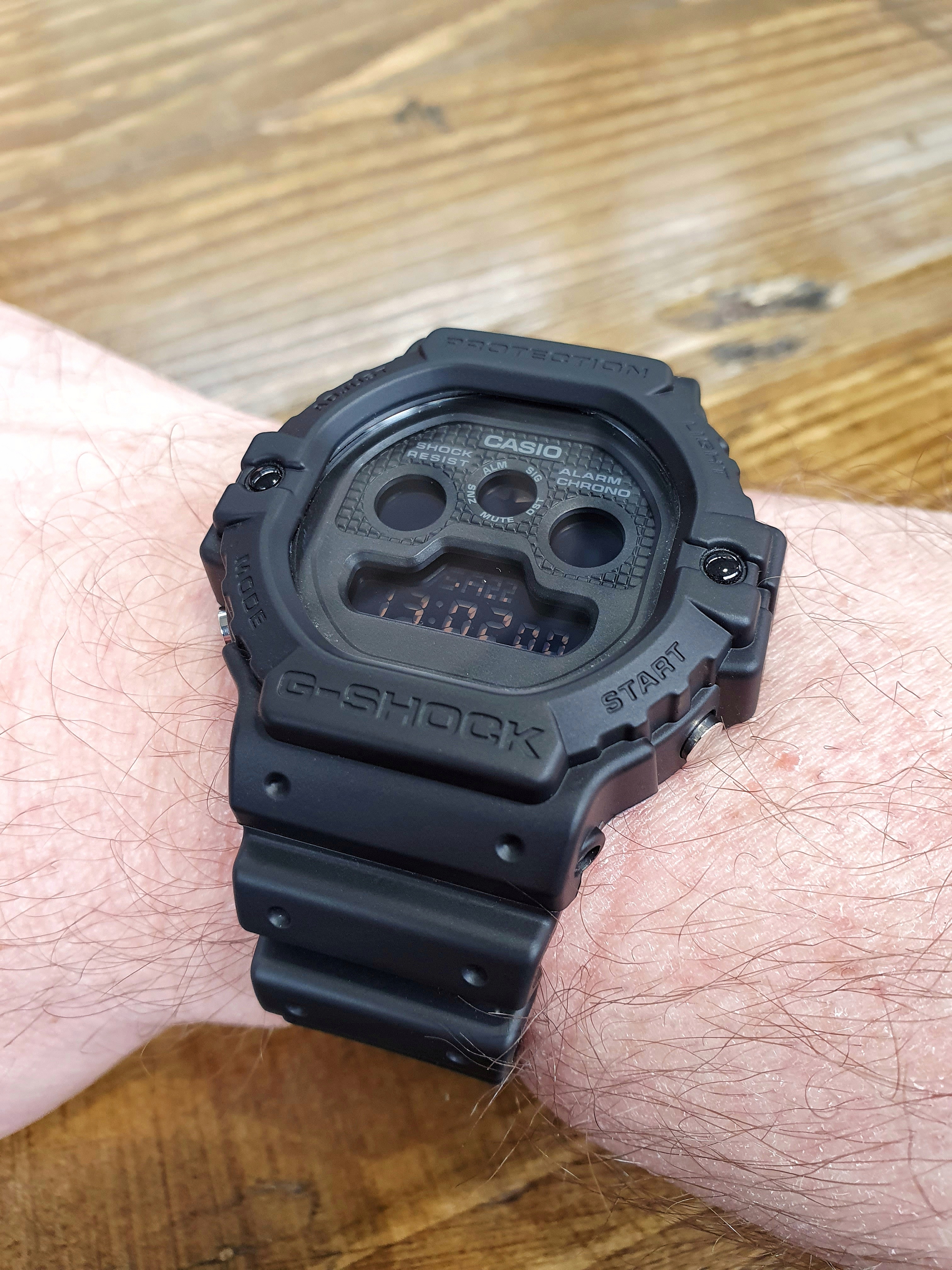 These days Casio watches have pretty much become part of pop culture. Most people know what a G-Shock is. If they saw a picture of an F-91W they would recognise it. Probably followed by ‘my mate (insert name here) has/ had one of those’. Casio are very good at what they do. A selling and marketing juggernaut. They sell decades old designs that are still as popular as ever. I wonder just how many F-91W’s have been sold! While frequently releasing new models, new colourways, collaborations and limited editions.

One recent model that has exploaded in popularity is the blackout model GA-2100-1A1, a.k.a the CasiOak. It got it’s nickname for looking somewhat like the Audemars Piguet Royal Oak. It looks like what you’d get if you interrupted the creature from The Thing mutating from say a DW-5600 into a Royal Oak half way through. Minus the teeth, tentacles and 12 mouths! 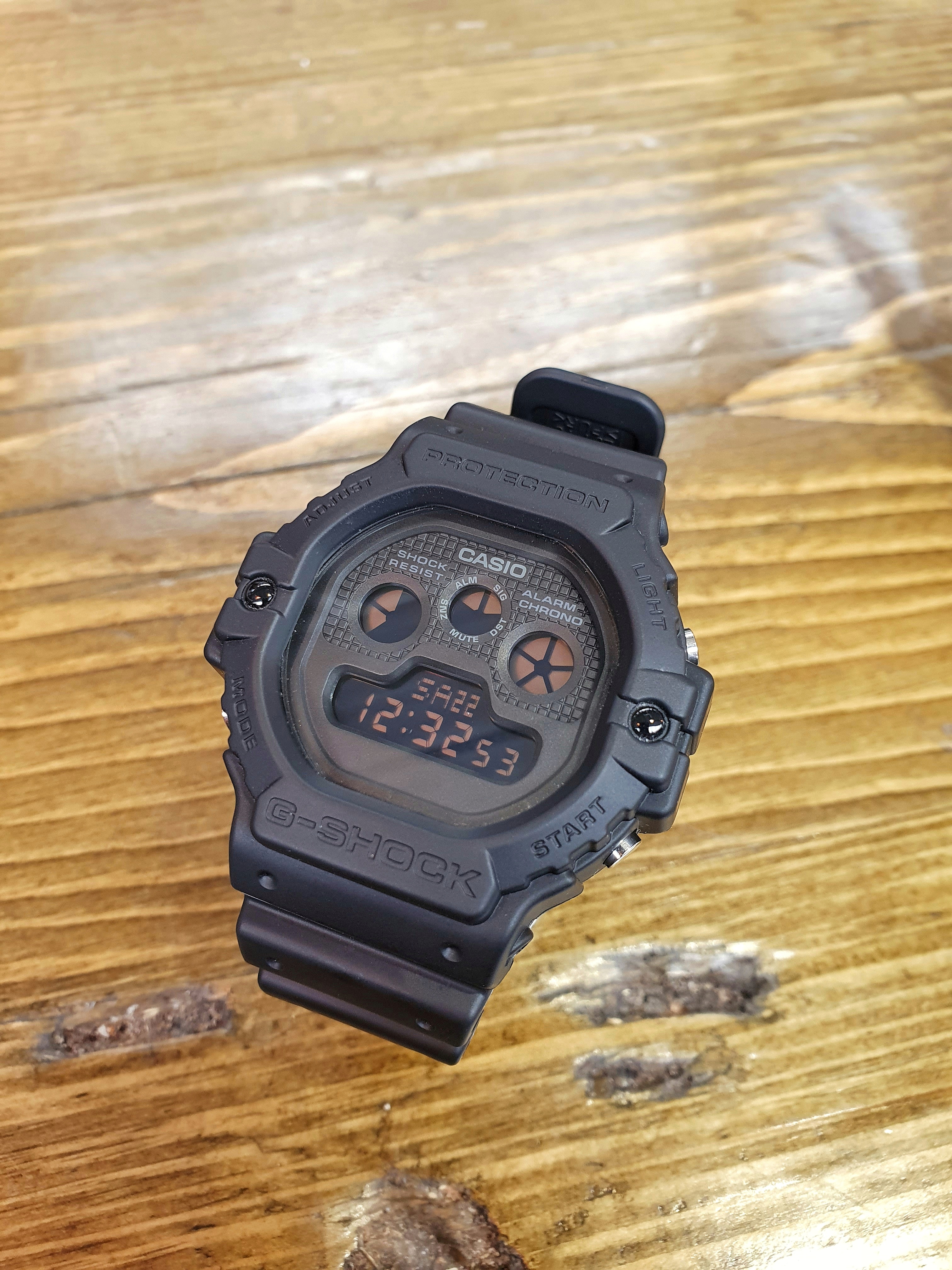 I really like the blackout G-Shock’s and I fancied adding the CasiOak to my collection. But it’s nearly, if not impossible to buy one at MSRP. As a tight Yorkshireman, the prices online were making me utter the Yorkshire battle cry of ‘Ow much!’ But, there is an alternative, which i think is every bit as good. One that has maybe been overlooked by some and is well worth considering.

That model is the DW-5900BB. It’s also got the look of a Casio/AP mash up. Its very Royal Oak Offshore-ish in fact. So I bought one. Move over CasiOak, and meet your competition. The CasiOffshore!

The nickname suits. The DW-5900BB has several elements that are reminiscent of the Audermars Piguet Chronograph. From the octagonal case shape. To the display. The upper half of which, with its grid/tile design, surrounding the 3 small circular LCD display cutouts,  looks very much like the tile design on the Royal Oak Offshore and the Chronograph sub dials. But it’s not just these traits that make this an awesome looking piece. 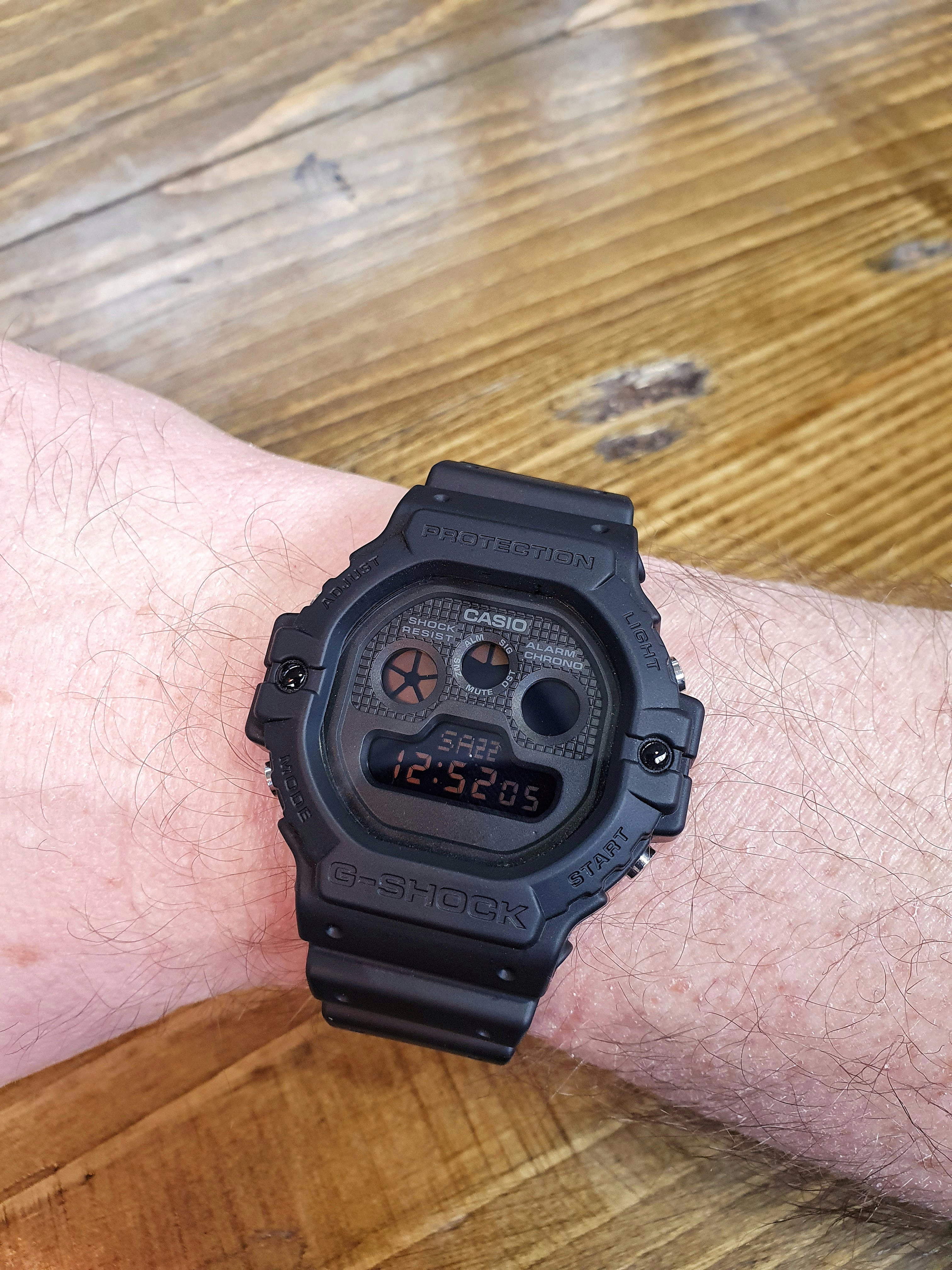 It’s proportions are good, measuring 47mm diameter, 51.5mm lug to lug with a thickness of 15.5mm. The resin band tapering from 25mm at the lugs down to 19mm. Beefy but a very wearable size. The original 5900 model dates back to 1992. So it has the more modest dimensions of earlier model G-Shocks. Compared to some of the more modern G’s which are oversized.

The CasiOffshore keeps things sleek and Ninja esque, with virtually all of the watch finished in matte black. Some blackout models have glossy black surrounds on the display, as well as other glossy accents. Which I don’t like as much. The matte finish here is aesthetically far better. The case and band also has an almost velvety tactile feel to it. Which gives the CasiOffshore a feeling of quality. 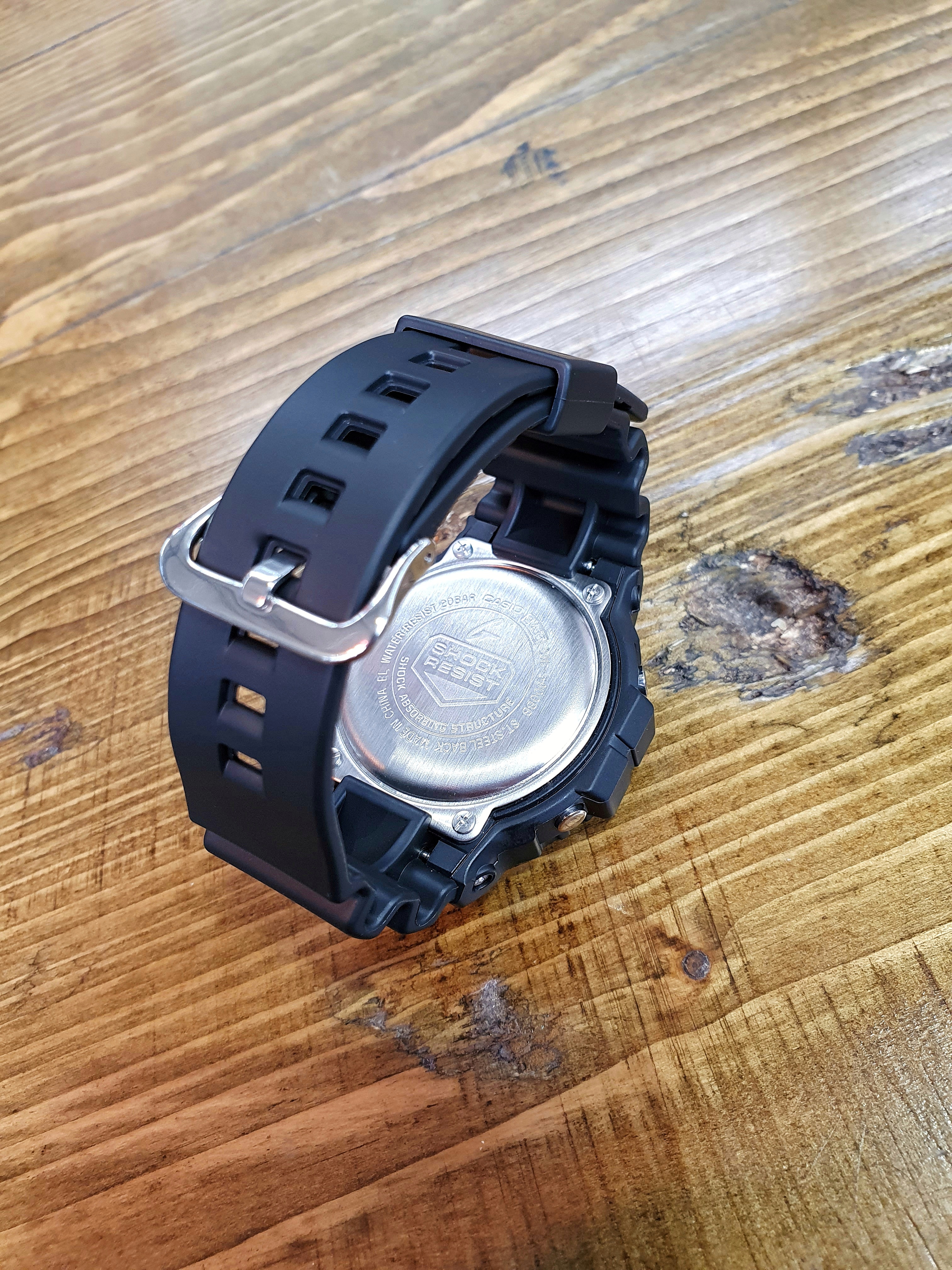 Behind the mineral crystal, things are looking just as sweet. The CasiOffshore is somewhat thicker than the more svelte CasiOak. Elements of the Casioffshore benefit from this. With the negative display being set very deep into proceedings. This gives everything under the crystal a bold layered look. The LCD surround has multiple levels to it. An outer raised ridge frames the rest within. With the grid/tile upper half of the LCD surround recessed lower down than the frame. Which features CASIO, SHOCK RESIST and ALARM CHRONO printed at the top. The circular LCD cutouts have a nice bevel to them. The lower half of the watch features a smooth matte panel, in which sits the main negative display. It’s all very well executed and feels cohesive.

Negative LCD displays are a bit form over function. They look cool, but are tricky to read at times. Especially in bright sunlight. But I’m pretty sure people don’t buy backout G-Shocks for the legibility. The size of the digital numerals in the CasiOffshore are a little smaller than in some G Shocks. So slightly compounds the issue. But it’s not too much of a problem.
The module in the CasiOffshore is #3465. Which offers a fairly ubiquitous list of features found in most G Shocks. Including Date, Stopwatch, Countdown timer, 5 Daily Alarms, 1 Snooze Alarm and Hourly Signal. It’s also a World Time module. With the EL backlight rounding out the spec list. 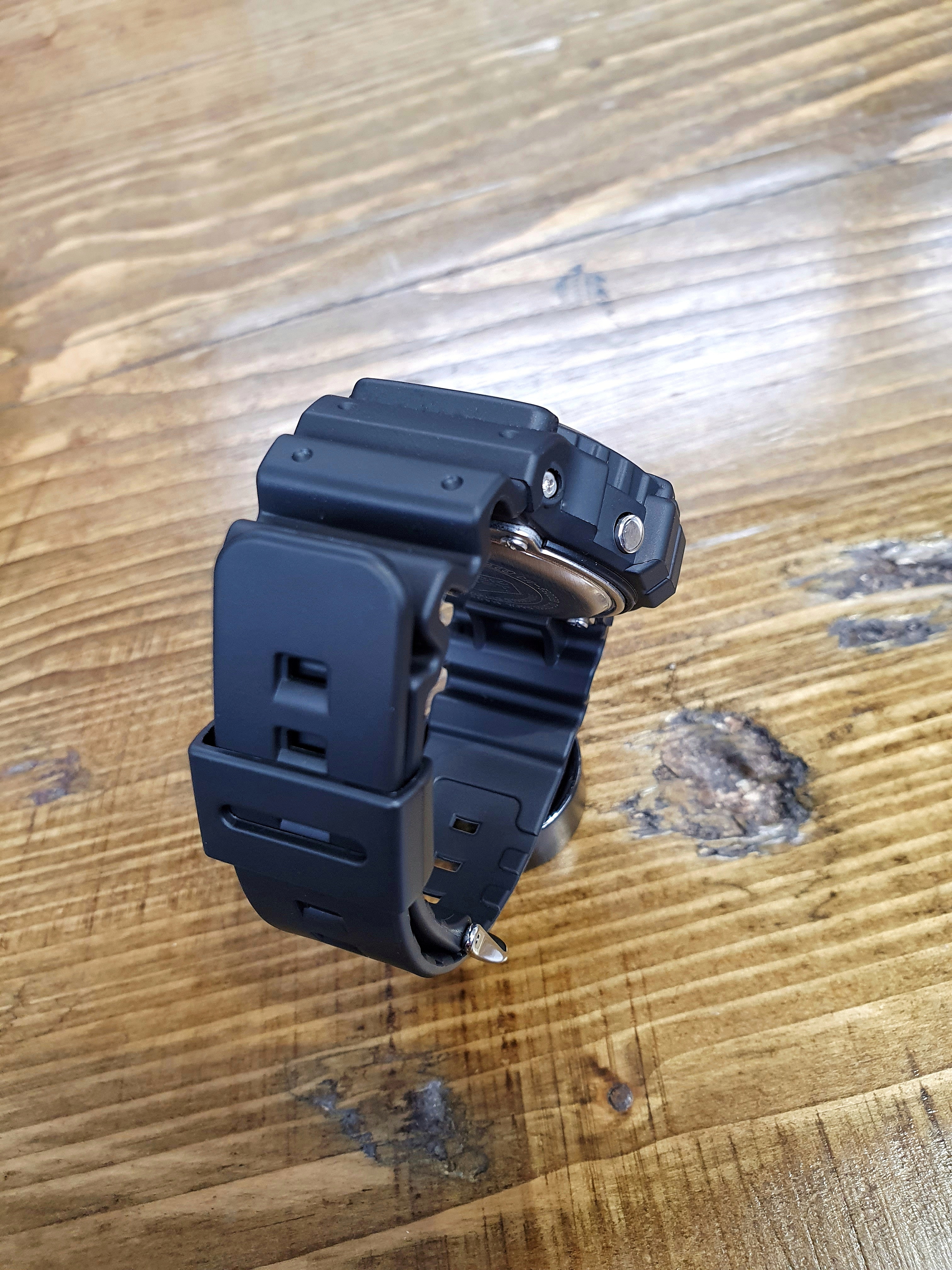 Standard G-Shock practice is employed for the resin band. It contours down quite dramatically off the case. The CasiOffshore sits on the wrist superbly well. The pushers, hardware and screws are stainless steel. Which offer a little contrast over the rest of the design.
It has a screw on case back with the usual mini-essay to read while tilting your head from side to side. Which tells us amongst other things the watch is water resistant to 20 Bar/200M.
Overall the CasiOffshore is, a bit of a behemoth! I’m very glad I bought one. The blackout G-Shock’s I think offer a bit more versatility in a Casio over some other models. They can be worn in situations you might not put on a G-Shock normally. The stealthy, Ninja-like all-black look feels smarter. I have a couple G-Shocks in my collection. But they get worn for workouts and as beaters basically. To me they never really feel quite right to be worn for something like a casual evening out. But the Casioffshore does. It will be fighting for wrist time with the rest of my collection. I can see it tapping out even some of the heavy hitters in my collection at times to win too.

So that brings me onto a couple of questions. What is it about the CasiOak that’s made it become so popular? Is the CasiOffshore a worthy alternative for your hard-earned cash?
I think a few things have pushed the CasiOak to the top of many peoples most wanted list. These are: 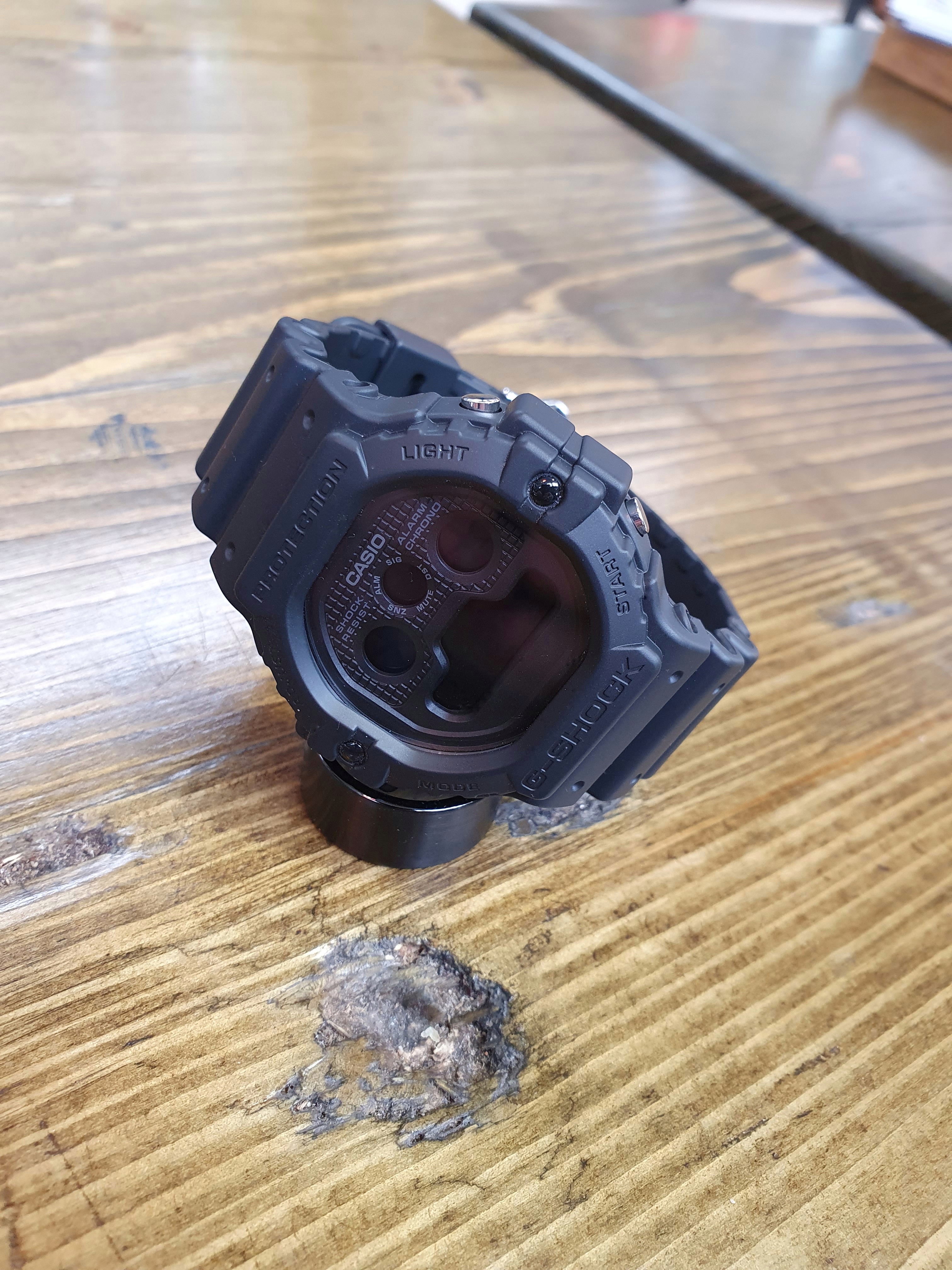 Size- Current trends are for watches getting smaller again. The CasiOak is small for G. Measuring 45mm diameter and at less than 12mm thick, is the thinnest G Shock ever made.
Ninja credentials- The GA-2100 series is available in several colours. Some new ones having been released around the time I’ve been writing this article. But the blackout one is THE one to have.

It’s New- Plus the design is great. So it was bound create a buzz. 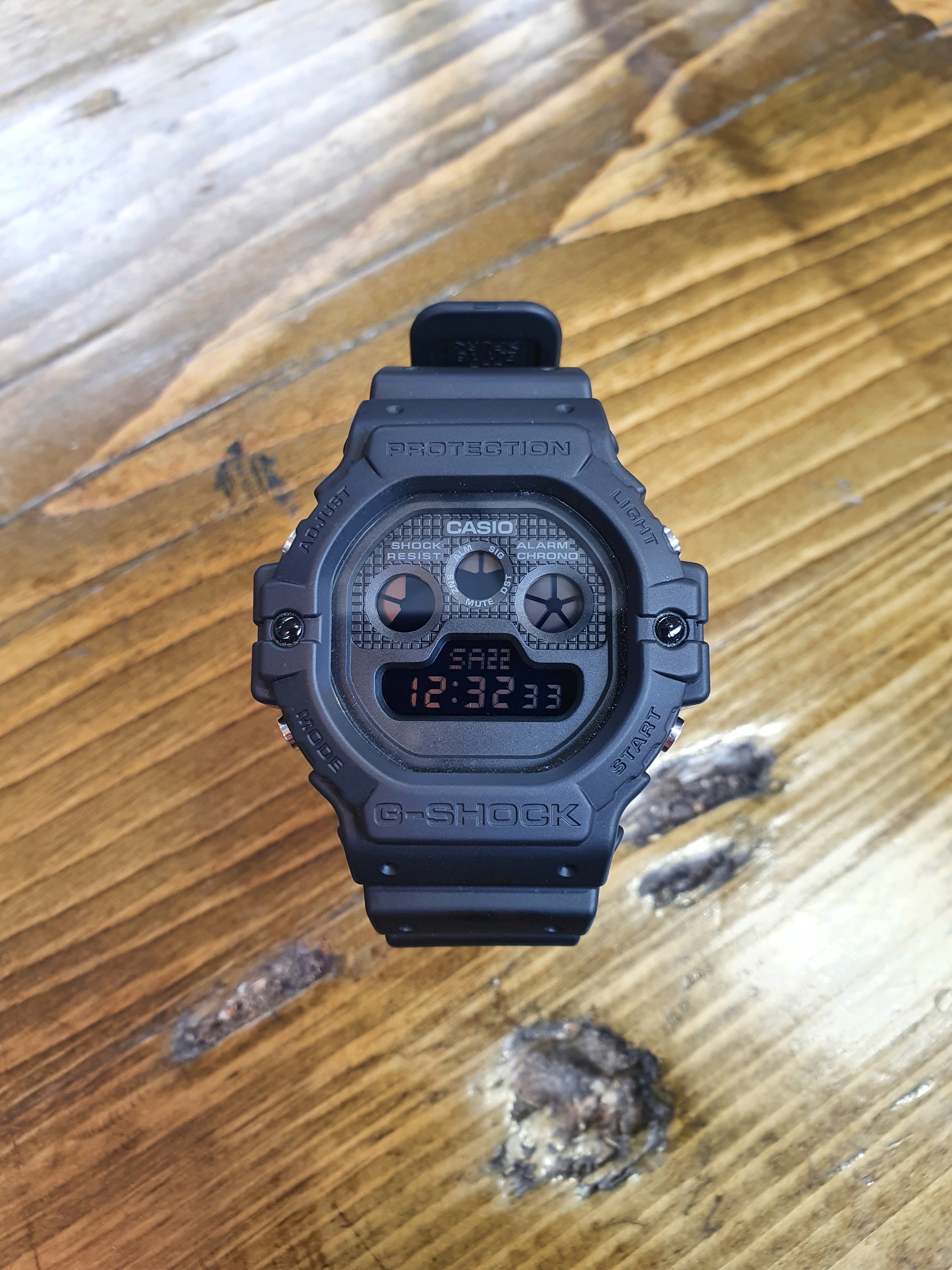 Last but not least. It’s nickname and the Audermars Piguet characteristics, you could say it’s AP ness!…ahem. The CasiOak’s a cool piece in its own right. But the newly given moniker and comparison to the Royal Oak have certainly helped snowball its social media profile, hype and ultimately increased sales. Would the CasiOak be as popular if it was just the GA-2100-1A1? Who knows.

So with all that being said. Is the CasiOffshore worthy of the nickname? Is it a contender? Competition for the more famous of the two watches with AP ness (sorry couldn’t help myself!) I think it is. It’s different to the CasiOak but has much of the same appeal in my eyes. It’s an awesome design. Which has been around in various other colours for 28 years! It’s versatile with its stealthy look. At only a couple of mm bigger than the CasiOak it’s still a smaller G-Shock. Then there’s the fact that you can still buy it for MSRP or less. I paid just under £55.00 for mine. Compared to what the price gouges are asking for the CasiOak it’s a bargain!

So if you want a CasiOak. But can’t get one at all, or for a reasonable price. Or maybe you have the CasiOak, but want a companion piece to go with it. Or you want to own something different to what feels like EVERYONE has bought. With kudos of it’s own. But that shares similar DNA by having Audemars Piguet traits. Then you might want to consider getting yourself a CasiOffshore. I’m pretty sure you won’t regret it.
Neil
@thewatchyeti

Born and Bread in Yorkshire. Got into watches at 8 years old when my mum bought me a Chinese digital watch from the local market. Black and yellow with a BMX rider on the glass. I refused to take it off. Got a Casio AE-21W for Christmas. And the damage was done! I was a Casio fanboy.

Owned several watches in my teens and 20’s by Casio, Timex, and 1 Citizen. Then came a few years in the bare wrist wilderness. Ended with Fossil, TW Steel, Police watches and an Invicta! Fell properly down the rabbit hole of the hobby 2 1/2 years ago. A big fan of Divers, Sports Chrono’s and Field watches. Casio, Seiko, Orient, Citizen along with Microbrands and Vostok Amphibia make up my collection.

A fan of Oris, Doxa, and Tudor amongst others. Currently attempting zero in on a Tudor Black Bay Steel.

Outside of watches. I’m a huge horror fan. Halloween is my favourite day of the year. I enjoy Mountain Biking, Badminton, Cricket, Music; mainly Rock & Metal, Gigs, Tattoos, Movies, Cooking (and eating), Stand-up comedy and Cars. A Pogonophile and traditional shaving fan. I have also been known to occasionally make Rum disappear!