Do you remember that feeling from turning the key in the ignition of your first car? The millisecond after your lips separated from your first kiss? The clutch moment of beating the odds with nothing but you and your skill alone? The moment your crumpled paper ball of meeting notes made it into the office trash can a table away? 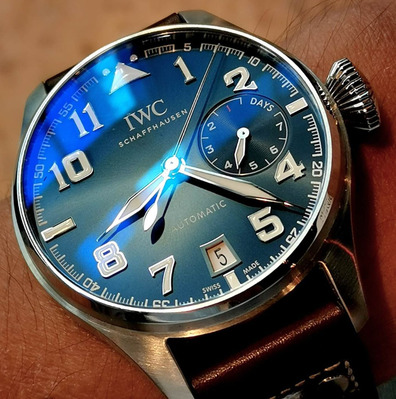 There was one watch that slithered past the day to day minutiae, the jaded perspective of just grinding it out until I got home, and delivered a Mach 2 punch of that feeling that made me sit up a little straighter in my creaking office chair.

IWC’s Big Pilot is a force. 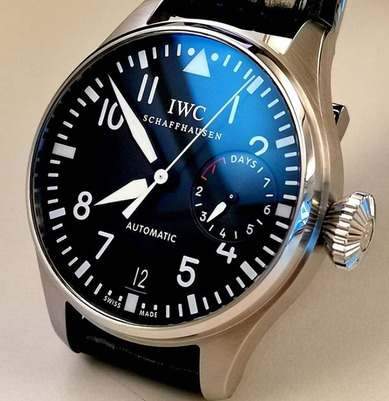 In 1850, Florentine Ariosto Jones, otherwise known as F.A. Jones, saw the town of Schaffhausen in dire need. Jones was an engineer and a watchmaker who couldn’t see the tiny town just fade into antiquity as the Industrial Age surged forward. So, he teamed up with (essentially himself) another watchmaker and engineer named Heinrich Moser to build the town’s first hydroelectric plant. With one crisis averted, they wiped their hands clean of grease and focused on their other craft. And a little later, in 1868, they created the International Watch Company.

That duality carried across the years: bringing in the best and just plain being the best.

After WWI left families ruined in its wake, the company set up larger living quarters for employees and a trust for the widows and orphans left with nothing. 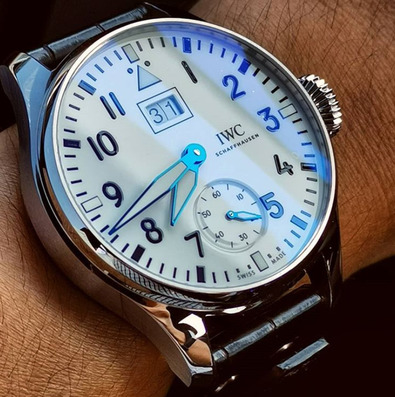 Head forward a bit to the quartz crisis: when IWC, like so many others, was hurting, the company didn’t fold or start throwing anything and everything at the wall hoping something would stick. The company buckled down and innovated some truly remarkable pieces and manufacturing marvels, like the first titanium bracelets on a timepiece. And just like F.A. Jones, they brought in someone very much qualified to help: a designer named Ferdinand A. Porsche.

So, it’s fair to say that giving that genuine, extra push for the better is in IWC’s lifeblood. A presence left, both inherent and ingrained, by its founder that pushes the company further and further.

And yes, the “the” needed to capitalized.

1,000 B-Uhr military navigator watches were created by IWC for the German Air Force in 1940 with some very distinct dials and mechanics underneath. And although that B-Uhr has undergone some changes both internally and externally, the stainless-steel case diameter (of the watch formally known as B-Uhr) hasn’t changed all that much since 2002. It still has all the right measurements with a 46.2mm and 15.5mm height case, a 22mm lug width, and a crown makes you say “Oh…”. But it’s not from a lack of innovation, most Big Pilot watches, post-2002, now contain a Caliber 52110 movement. Which, aside from being a marvel of its own, boasting 257 components and 31 jewels, has a seven-day power reserve.

So even if you didn’t bring this piece along with you on your jaunt to Majorca, it would still be ticking when you got back.

And just in case you weren’t sure how much power you had left after said trip, some references of the Big Pilot feature a week-countdown complication in the three o’clock position. For the record, where many find the three o’ clock position somewhat contentious (the Cyclops v No Cyclops Date Window War), the Big Pilot manages to make your eyes glide across the whole of the dial. 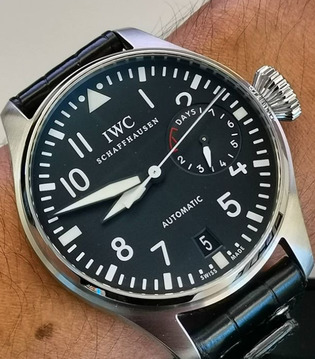 Its also saying something that, despite the many colors and combinations the Big Pilot comes in (stainless steel and gold cases as well as blue and silver faces) there is something so simplistically powerful in each one; each iteration looks like it is the flagship reference.

The Big Pilot family also grew in the mid to late 2000’s where the watch racked up some impressive new functions and complications. This included day-date and chronograph functions (among others), whereas the “classic” options remained in their simplicity, with the power reserve and date complication. Overall, it’s a fantastic gesture that caters to both kinds of enthusiasts, both old and new. And just in case you forgot what kind of people IWC are, they even made a version of the Big Pilot specifically for those who are left-handed.

Those who collect watches have all experienced a bit of waning and waxing on our horological journey; from our humble beginnings to our grail watches. From the 44mm-and-up club to the 36mm-or-nothing society. I trended towards the latter over the last few years and 99% of the time that fact is still true.

But that one percent belongs to an undeniable feeling gifted by a true flieger, that spark of indomitability; that little weight to your step that rocks you ever-so-recklessly forward. Because in that moment you know the world is going to take a tiny step back. 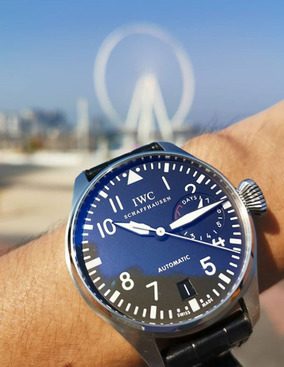 All photo credit to Vincent, @india.whiskey.charlie

All watch photos, all the time @theonetruewatch