For those of you not aware of US microbrand Tockr, they’ve built up a reputation offering smartly-designed watches, usually with aviation inspirations. The Air Defender is no different, as the name might suggest. This review is about my experiences when I got to spend some quality-time with the Air Defender in all it’s pilot-y glory. Whilst my first impression upon picking up this watch was “this is a big watch”, it turned out to be both true and false. I realise this doesn’t make a whole lot of sense per se, so let’s take a closer look… 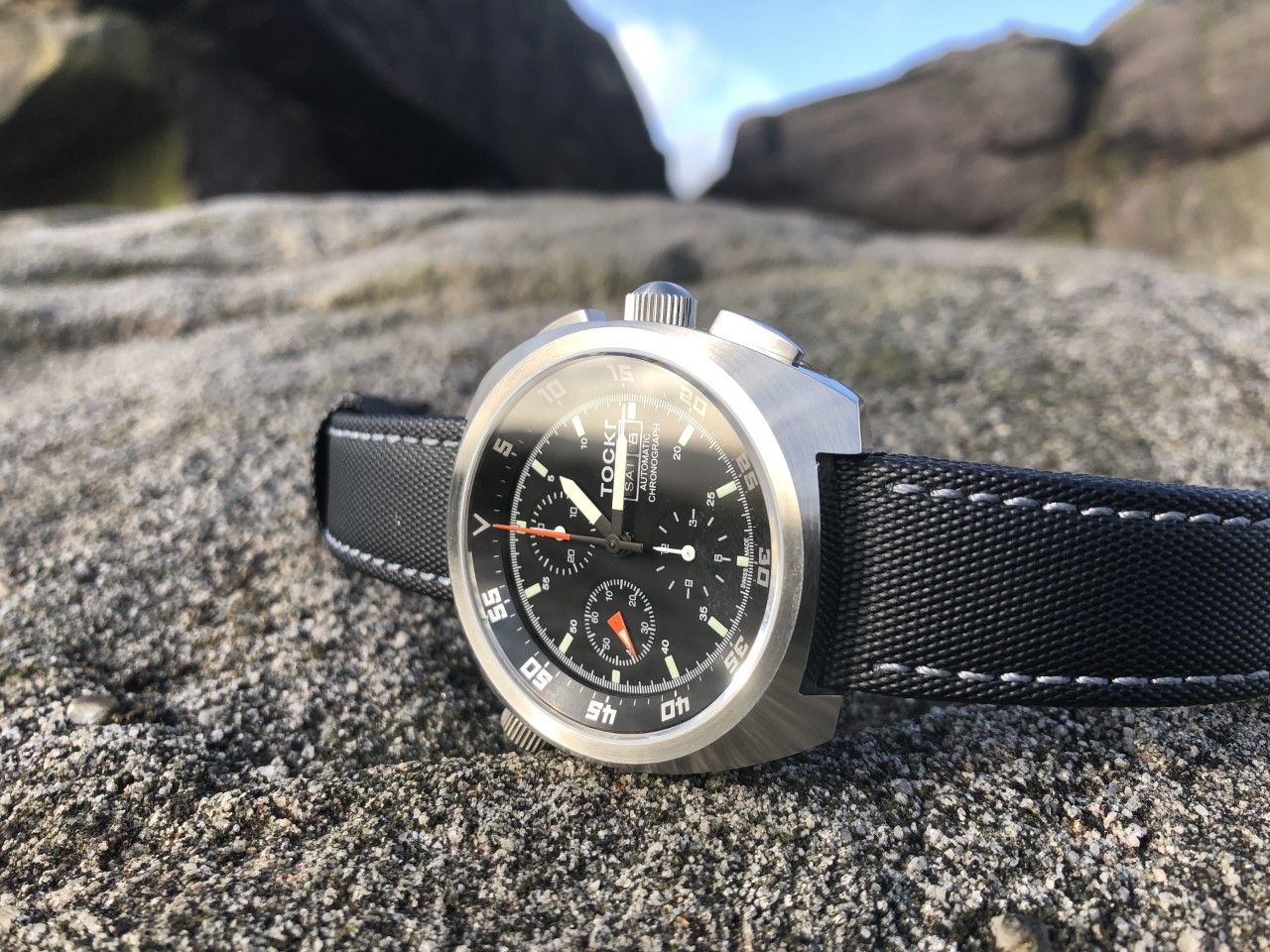 The case is a slightly tonneau-esque case made from the standard 316L steel. The specs sheet puts this watch down as a large 45mm diameter. In a world of shrinking case sizes that’s definitely on the larger side. I, personally, usually prefer 40-42mm. There’s a valuable lesson learned with the Air Defender though; case diameter is not the single defining factor in how a watch will wear. The lug-to-lug of this watch (when not on the bracelet) is a very wearable 48mm. The bracelet adds some considerable heft to the watch but I’ll cover that later. 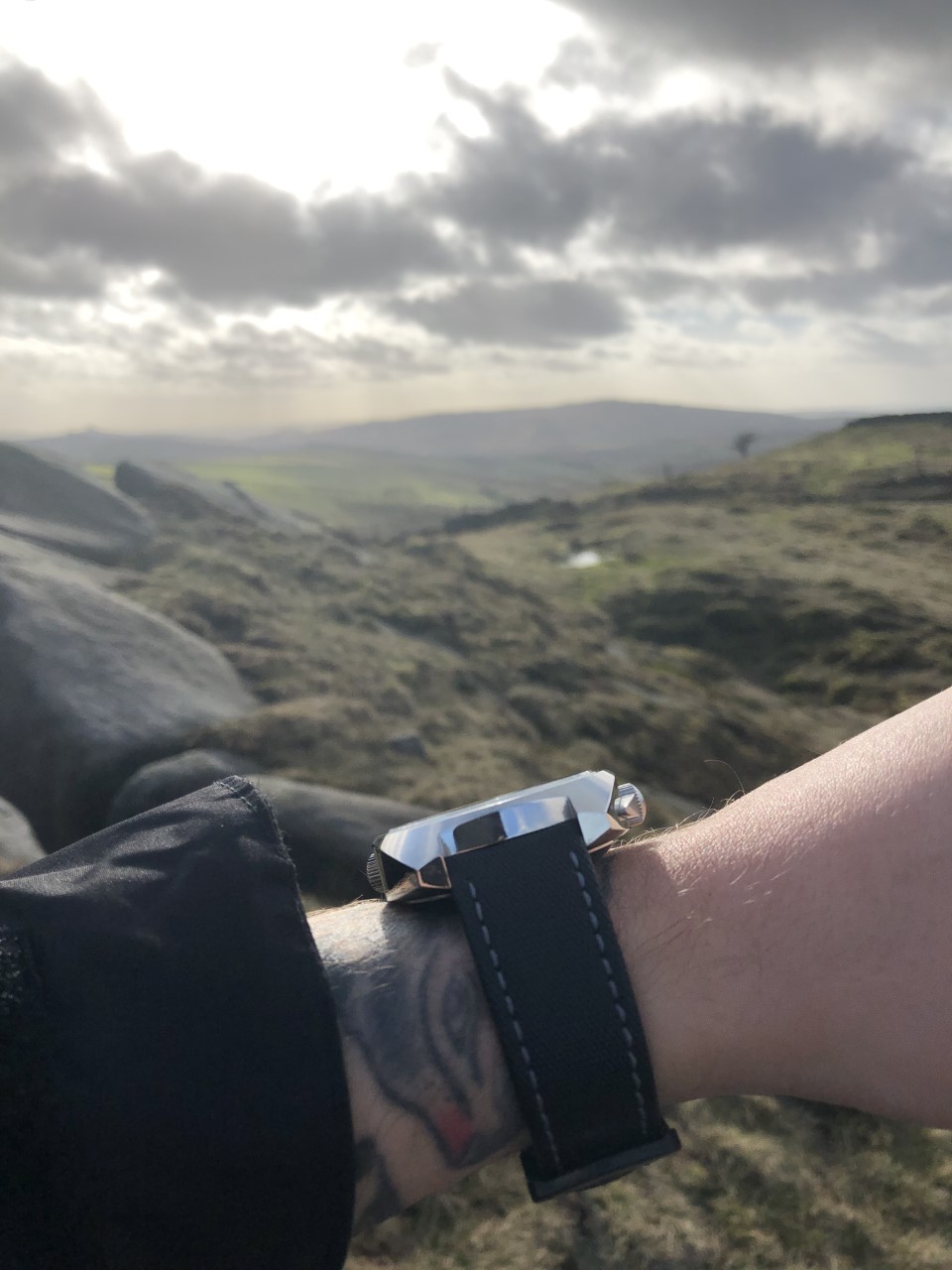 On a standard strap, this 45mm beast suddenly becomes very wearable thanks to the shorter lug-to-lug measurement. To add some perspective, the Rolex Submariner also has a 48mm lug-to-lug measurement. In turn, this means that it helps offset some of that 45mm width very nicely. It suddenly becomes a lot easier to pull off for those with smaller wrists, like me. I wouldn’t usually even look at a 45mm watch, but the Air Defender wears closer to a 43mm for me, making it much more manageable. Despite all of this, the case is pretty thick, but there’s little that could have been done in this regard due to the movement choice. 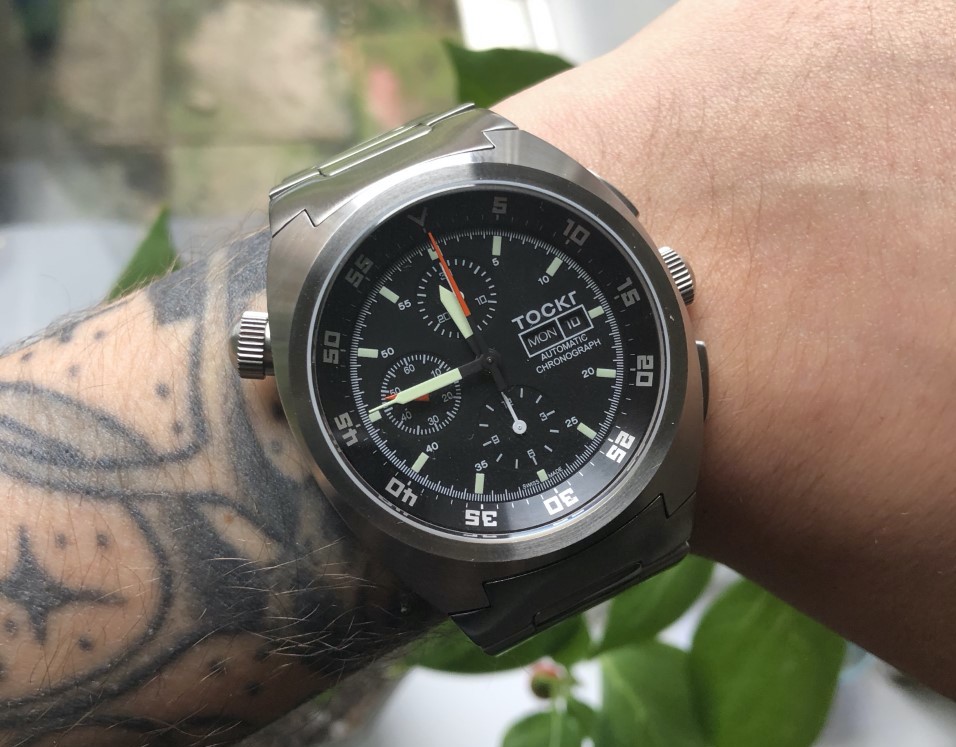 The dial of this review unit is a fairly simple black affair with white text/numerals. That’s fine – I’m quite a simple person and a nicely executed simple dial is very much appreciated. It’s harder to do simple nicely without becoming losing your way, so props to this. The Air Defender is also available in other dial colours too; the green sunburst version is also pretty cool. Due to the movement choice (ETA 7750), the dial has a standard 12/6/9 subdial arrangement and a day/date at 3. Nothing revolutionary there, and that’s fine by me. 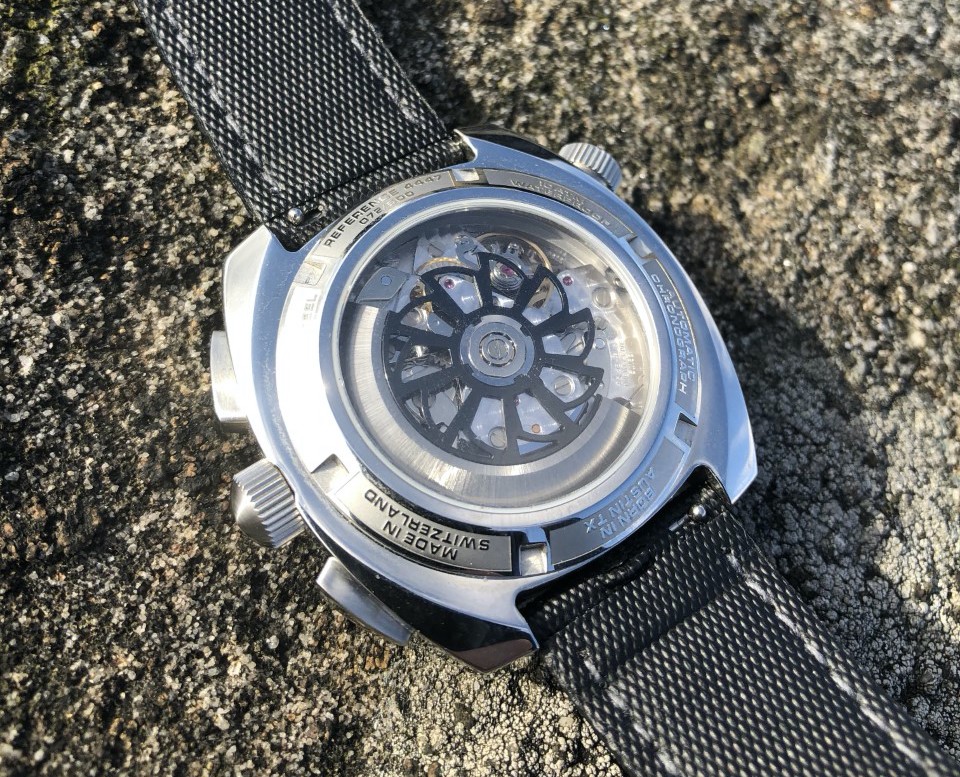 As mentioned, Tockr have chosen the ETA 7750 to power their Air Defender. The 7750 is a well-known and well-respected Swiss automatic chronograph movement. It’s the go-to choice for microbrands when making an automatic chronograph. There’s little competition for it apart from Sellita’s SW500 series, but you rarely see them used. Seiko have their NE88 automatic chronograph movement too. With the strangling of the sale of ETA movements to brands outside of the Swatch group, I think we’ll begin to see a little more variation in this regard. For now though, the 7750 is a solid, tried-and-tested choice. No complaints here!

The bracelet is probably my least favourite part of this watch. I don’t mean that as a criticism though. The fit of the solid end links to the case was near perfect. The links and the construction of the bracelet are also up to the standard expected at this price point. The thing which I didn’t like was that the bracelet increased the lug-to-lug measurement considerably. The increase was from 48mm to 57mm. This basically makes the watch far too big and unwieldy on my wrist. So as nice as the bracelet is, it’s no good for me. Since I’ve had this review unit, I have had it on a sailcloth strap from WatchGecko and it’ll remain on that strap until I return the watch to Tockr! 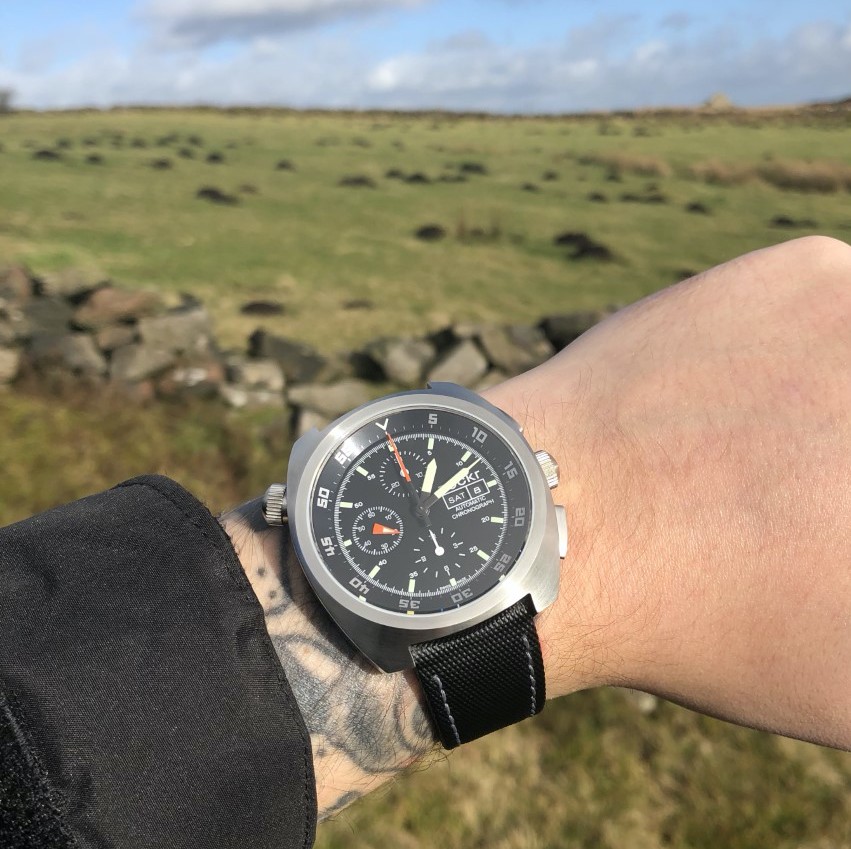 Overall this is a really cool piece. A big watch which wears smaller than the spec sheet might initially expect. It’s a no-nonsense chronograph watch, and it’s designed with the tool-watch function in mind. There’s no unnecessary frills and, for me, that’s what I like. It’s here to do a job and that is what it does. For those who do like their watches a little jazzier, there’s other colours available and even an option of ‘hydro-dipped’ cases.

These have bright, colourful patterns on them and introduce a fun side to an otherwise serious watch. Whatever your preference there’s likely to be an Air Defender for you. For me though, stripped back and simple wins the race!

Pilot watches have been seeing a surge in popularity of late. Tockr co-founder, Austin Ivey, recently admitted that the brand has recently seen a slight increase in online searches leading to their D-Day watch. With the imminent launch of the revived ‘Top Gun’ franchise, people searching for the watches linked to the movie will only increase, and in turn so will the popularity of other aviation-themed watches. Terms like ‘Maverick Watch’, ‘Top Gun Watch’ and ‘Tom Cruise Watch’ are naturally going to see a glut of searches in the near future, so the perfect business sense is to capitalise on this. 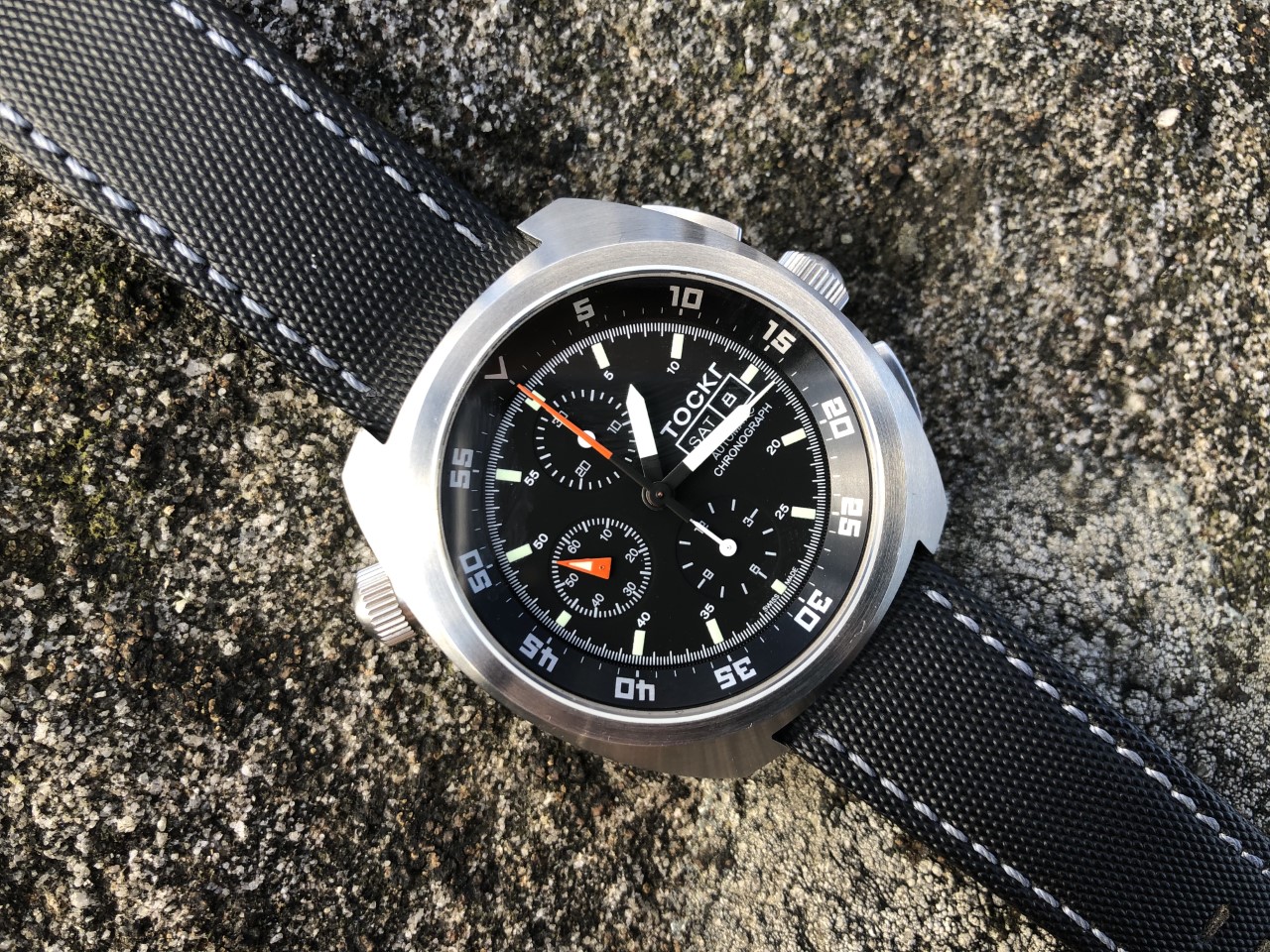 Off the back of the excitement for the reboot, Tockr are working on a ‘Top Gun’ inspired version of the Air Defender with some subtle tie-ins to the film’s branding – more information can be found in an article just published by the New York Times here. 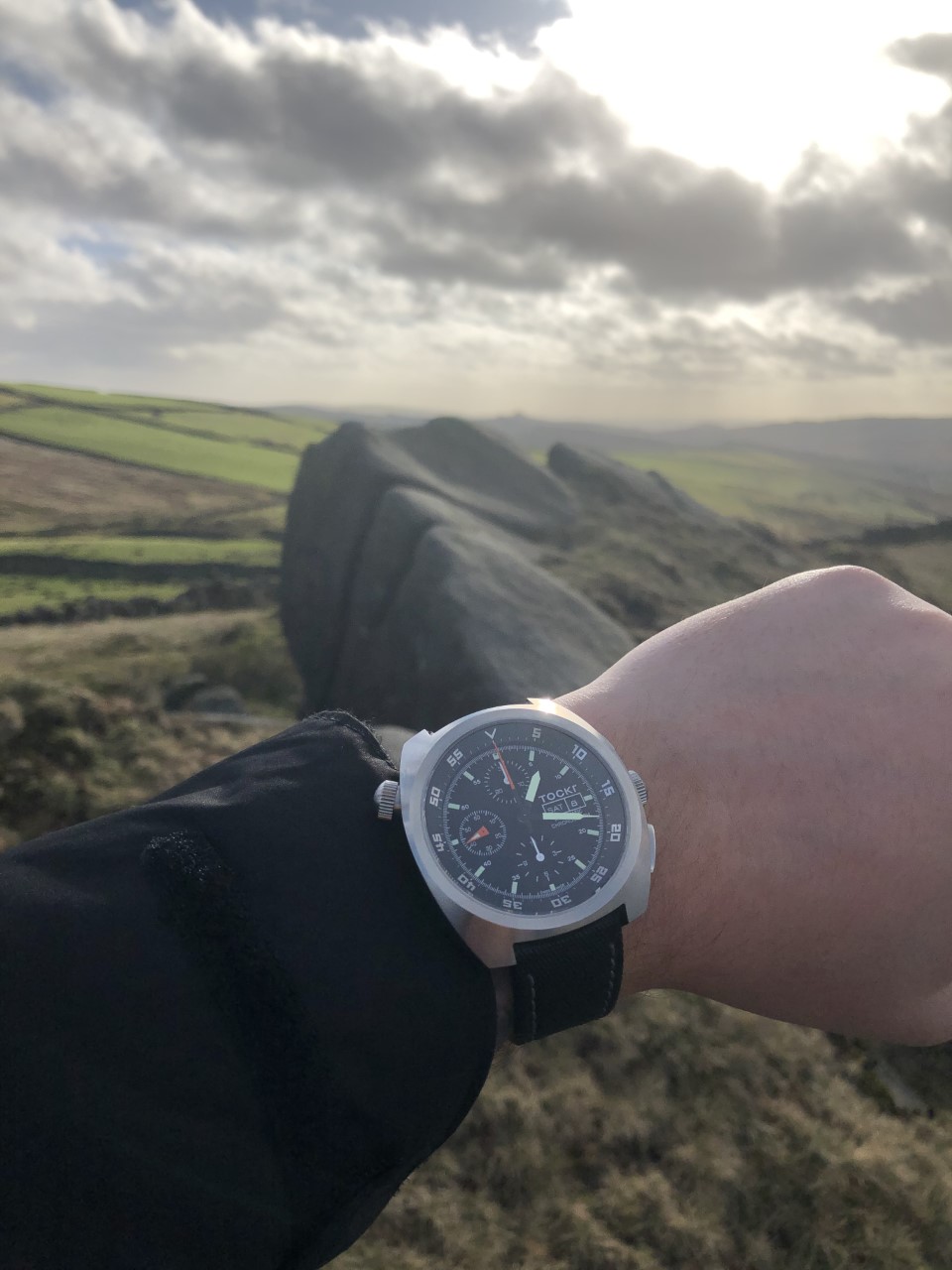 It’ll feature the same silhouette and Tockr DNA as the other Air Defender models, but it will match bright orange accents with a black dial. This is then paired with a distressed case and bracelet. The plan is to launch in June, so be on the lookout for an official announcement from Tockr very soon!