The Oxford dictionary definition of a hobby states: “(a hobby is) an activity done regularly in one’s free time for pleasure”. The keywords here are “regularly”, “free time” and “pleasure”. Take out any one of those words and the hobby turns into a project, an endeavor, a job or even a chore. My love for watches dates back to my childhood years, but only recently can I define it as an activity that regularly takes up most of my free time for pleasure. To be bluntly honest I have been taking days off from work to cultivate it! The term “addiction” more aptly describes my relationship with watches, but that’s the subject for another article.

One of those “free days” was a grey and rainy December Monday. The week before I had the pleasure to get into contact with Alberto Tonon, the young manager of the “Arcaido” watch brand out of San Donà di Piave, just 20 miles east of Venice. Alberto was kind enough to invite me for visit to their premises to see just how they do their thing. As a true watch nerd, the chance to see first hand how a watch is designed and brought to market was too attractive an opportunity to pass up, despite a 6 1/2 hour roundtrip train journey. 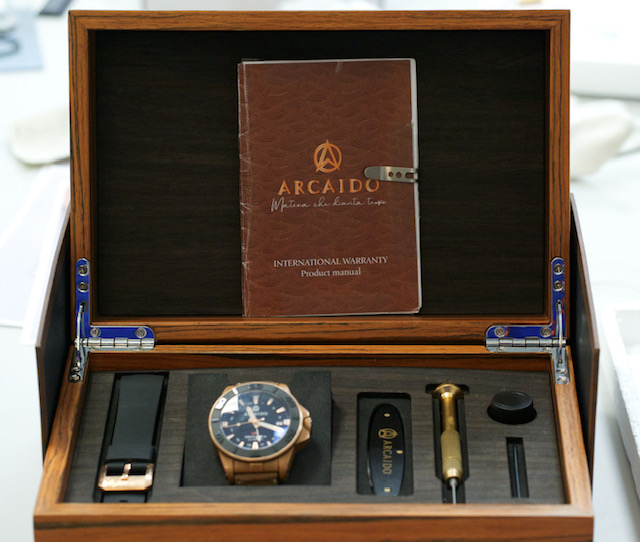 The little town of San Donà sits along the Piave river and counts about 41,000 souls. A little known fact about the place is that it is a sort of “mini golden watch triangle”. There are no less than five watch companies in the area, the most famous/infamous being the Meccaniche Veneziane microbrand.

Arcaido is different. A microbrand at heart, the holding company Balestra has been active in the OEM B2B watch business for the better part of 26 years. A large number of the watches sold by major international fashion and sports brands have their origin at the Tonon plant. Confidentiality is a key factor here as the company’s clients wish to keep their relationship with a third party manufacturer tight under wraps. 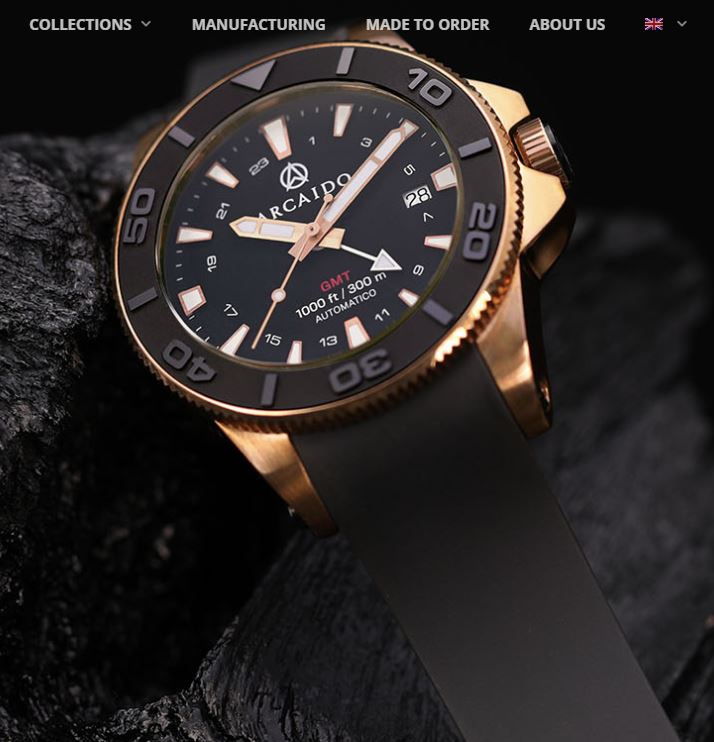 Arcaido is the “coming out” brand for the quarter-century old company: the begininng of a new era in which the young Tonon will slowly take the helm of the company from his father and set sail towards uncharted territories. No longer will they be a just a “ghost” watch maker, but a fully fledged brand with their own line of products. 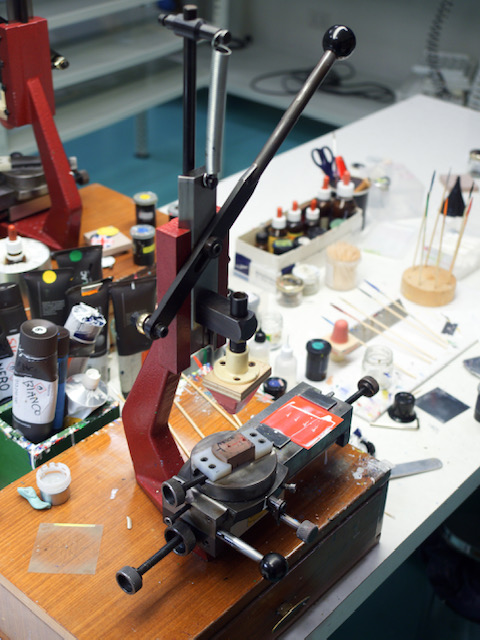 Alberto is a tall chap in his late 20s. The moment he picked me up at the station, we hit it off immediately talking about watches, and going off topic. Just like an episode of a Scottish Watches…taped in car. Majoring in communication, he spent most of his free time as a kid disassembling and reassembling mechanical watches. A hobby? An addiction? Who can say? He further built up his expertise in the business thanks to his father’s numerous connections with watch component suppliers the world over, mostly in Switzerland and Asia. He’s been around visiting swiss manufactures and Japanese factories in these years. His know-how of the trade is impressive for a guy his age.

The culmination of this know-how is the Arcaido “Primo”, the Italian word for first, a line of CuSn6 marine bronze cased watches whose Kickstarter campaign started the day before I got to visit. 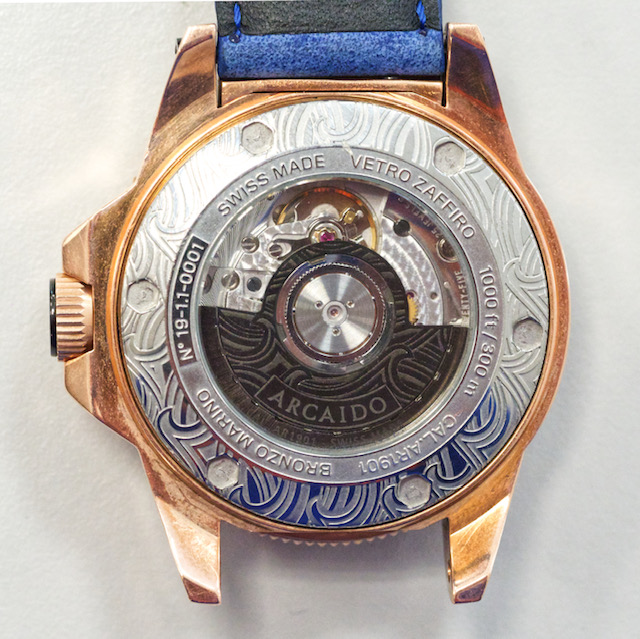 The design is inspired by the bronze marine chronometers you could find in an old ocean liner. I began by getting my hands on a blue gradient dialed Primo GMT which was already developing a slight patina. It’s a chunky but wearable 42.5 mm diver GMT with a 120 click mono directional bezel with a black ceramic 60 minute insert and a light blue aged leather strap with a bronze buckle. The dial is protected by an AR coated sapphire crystal. The beautifully adorned display case back (in steel and sapphire) treats the beholder to a well finished movement and black engraved rotor. The screw down crown has a black ceramic cap emblazoned with the Arcaido logo, which, incidentally, looks like love child of the Star Trek and the Blake’s 7 federation emblems 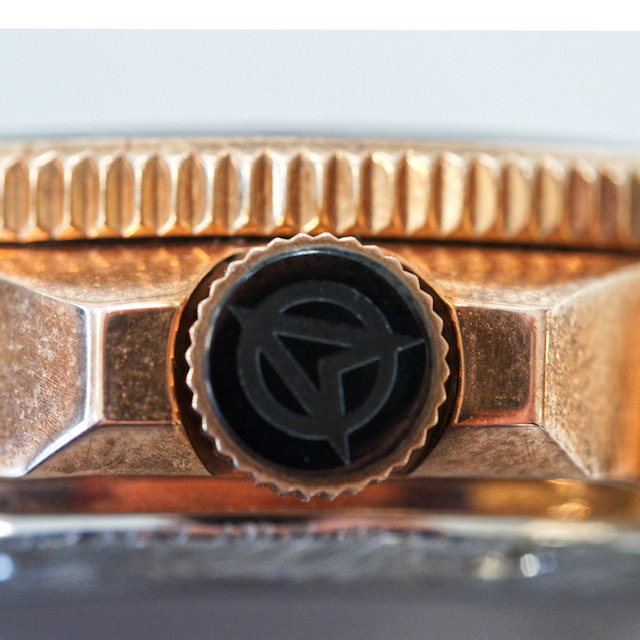 The build quality and finishing were surprisingly good for a prototype. The motifs on the back reminded me of the engravings found on some high-end shotguns. The only niggle I had was that the solid endlinks were slightly out of alignment, an issue I was assured would be corrected on full production models. About those endlinks: they are not held in by flimsy spingbars but by two screws that lock into the case. The straps (both italian leather and curved-end vanilla-scented NBR rubber) are held in by a black pass-through allen bolt which is secured using a supplied tool. This makes changing straps easy, as we all know how fiddly it is to remove and replace a solid endlinks secured by springbars. Both the rubber and leather strap with full tools are supplied together with a personalized passport (more on that later) in a gigantic and well finished wooden box. For those of us who couldn’t care less about shipping crate sized packaging, the watch on its own with one strap can be ordered in a sturdy but plain brown cardboard box saving the buyer 120 euros. Part of the manufacturing is carried out in a plant in the Swiss Canton Ticino, so the coveted (for some) “swiss made” magic words appear at the base of the dial. 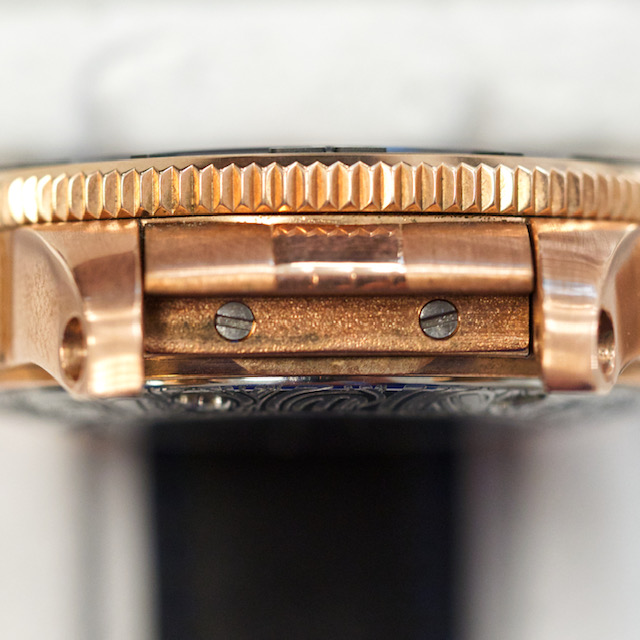 But that’s not all. The watch face can be personalised with your choice of logo or picture (your signature for example) for an extra 60 euros. The photo of the the watch with the unique dial will be printed in the included “passport”. The personalisation is carried out by Nicoletta, a lady with two decades of experience in this art, using a manual dial printing press that was close to a hundred years old. Despite the age of the tool the print on the dial was crisp and well centered. Afterwards the dials and movements are placed in a low-temperature oven to bake dry. 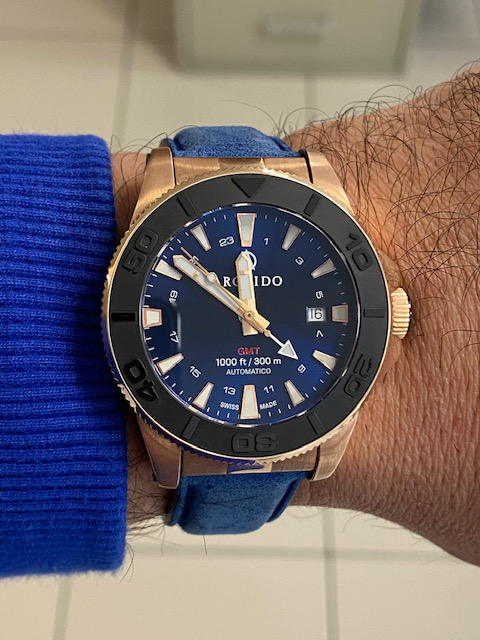 In a short chat with Mr. Tonon senior I was told that attention to user input and personalisation are an integral part of the Arcaido customer experience. At any point an owner can ask for his dial to be bought back to the factory state or any other kind of modification. This kind of relationship with the manufacturer is unheard of at this price point. 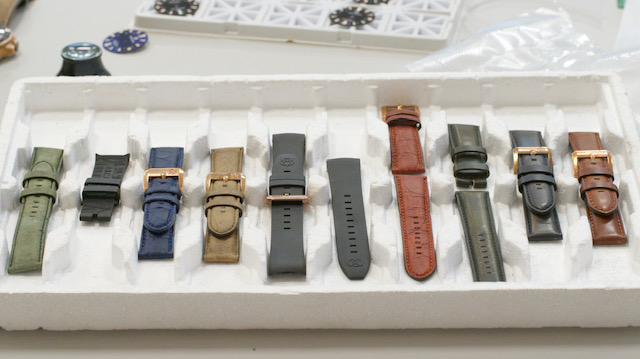 I could go on and on citing the specifications, dial and strap combinations and price points etc. etc. but I encourage the reader to head to the corporate website and kickstarter campaign listed below for all the nitty gritty details. Suffice it so say some of the early bird options were already sold out at the time of writing.(*) 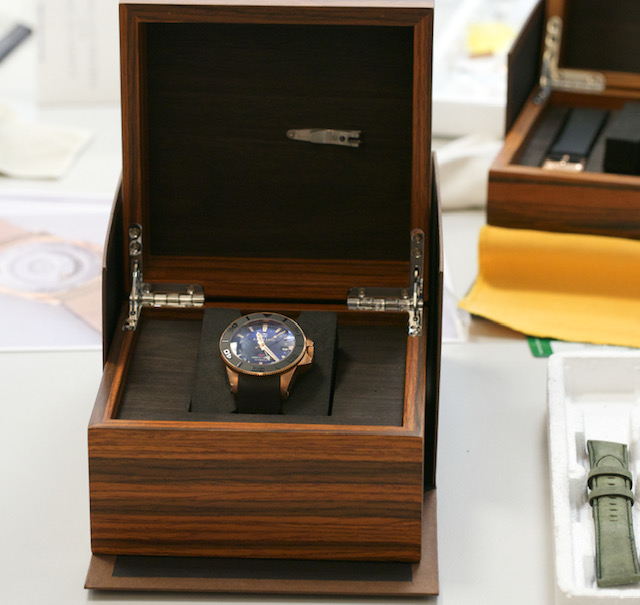 I have been promised a late production prototype piece soon, so watch out for a more detailed review with macros and video.

I’m pretty sure we will get to see great things from Arcaido in the not too distant future. In the few hours I spent there I was a witness to the passion that the team was putting into this interesting line of watches. I can only wish them success and godspeed on this journey, they deserve it.

(*) As of publishing the Kickstarter campaign has since ended, but all relevant information is still available.