I don’t know exactly when I began fixating on a mid-century Universal Geneve Tri-Compax as a ‘grail’ watch, but I do know that a couple of years ago I sent an e-mail to a watch-collecting friend saying I was having unhealthy thoughts about annual calendars.

In reply, he sent me some grubby shots of a Patek Phillipe 1518 perpetual calendar chronograph he’d snapped from an auction catalogue. And that was that. I knew things would get highly complicated for me someday. it was just a matter of when. And through what watch.

Although, I do have a strong feeling that the first time I ever saw a Tri-Compax was in a piece by Hodinkee’s Ben Clymer when I was getting into watches a few years back. He had written about picking up a 1945 Tri-Compax at auction (at a price that was absurdly low until he went and sprinkled his magic inflation dust all over it). Everything about his Tri-Compax spoke to me. What should have been a crowded dial was instead perfectly balanced. There was the flash of the red date hand, with the date numerals themselves circling the rich colours of the moonphase. And in bright light, the blued chronograph and subdial hands gave the dial an entirely different, party-time personality. 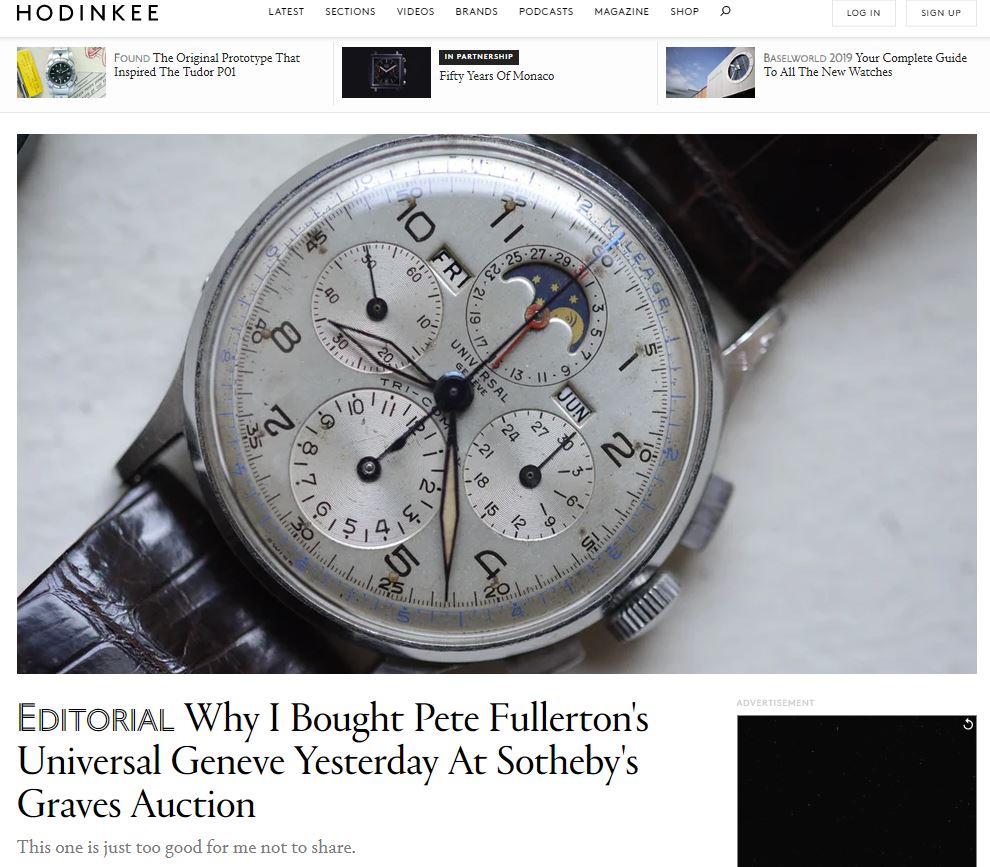 Add the patina, the case shape, the rectangular pushers, the choice of fonts, the history…

This was before I had properly fallen down the rabbit hole of vintage watches. But once I did, I always found myself circling back to Universal Genève in particular.

Universal Genève would have a strong case for being the greatest defunct watch brand if it wasn’t that it still notionally exists in a dormant state, owned by a Hong Kong corporate and with its website stuck in a foreboding ‘Coming Soon’ mode for some time now. 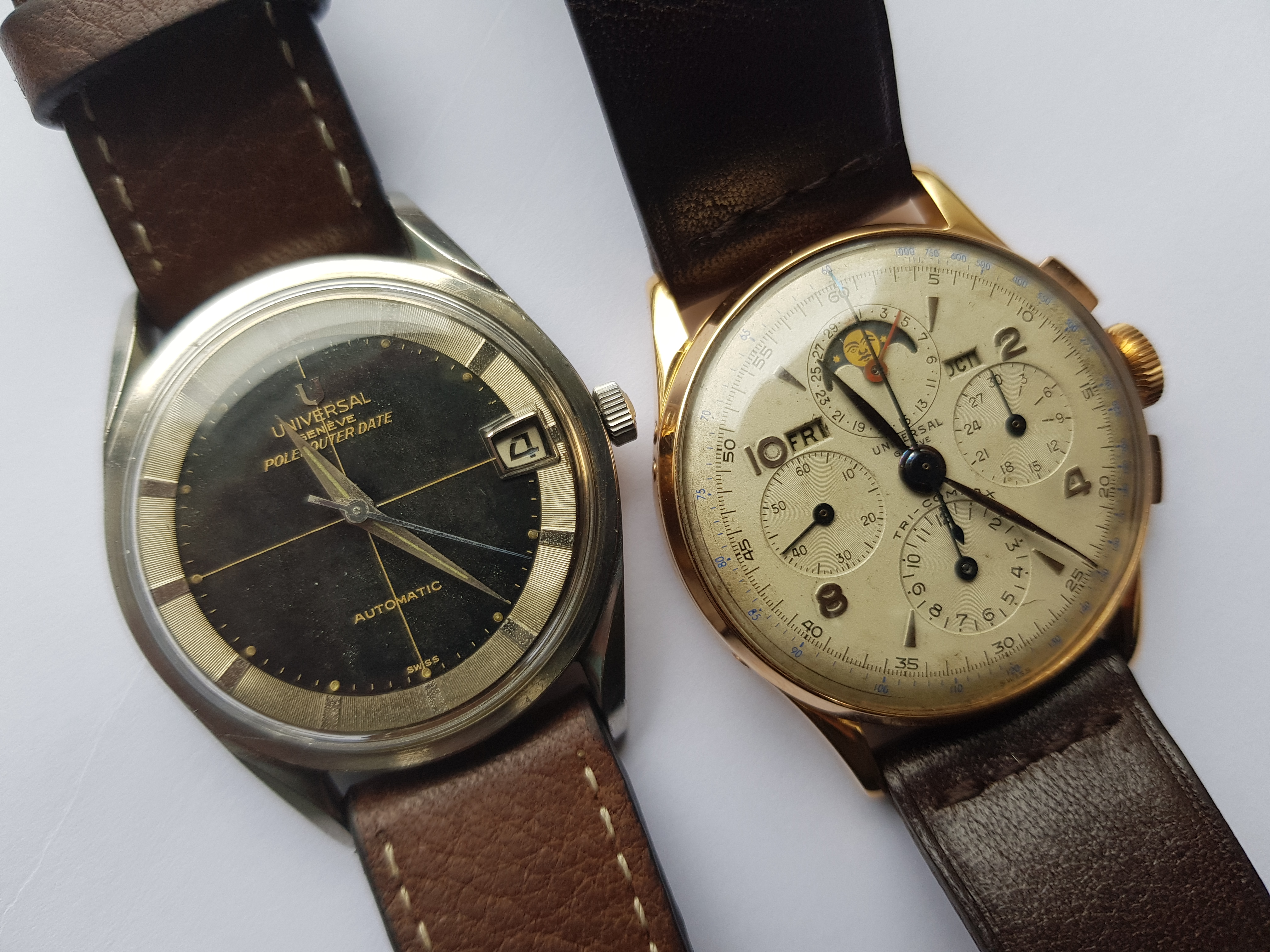 Between the 1940s-60s, UG’s designs were exceptional and its movements pioneering. Just check out the extraordinary “Nina Rindt” Compax, the “Big Eye” Uni-Compax, or the Polerouter Sub. Even the deceptively simple Polerouter – my first UG buy (see photo)- was Gerald Genta’s debut before he went on to design the AP’s Royal Oak and Patek’s Nautilus. That provenance would be enough for one watch, but the Polerouter also had a revolutionary micro-rotor tucked inside. That’s a double whammy that makes it so popular among collectors today (but still relatively affordable for now).

Still, the Tri-Compax kept calling to me most – especially designs from the years after its first reference was launched at the Basel Watch Fair in 1944. But I had no hands-on experience until a visit to Milan earlier this year when I passed a small vintage watch dealers, saw its window had a few interesting pieces and went into the dim interior for a look. The friendly proprietor produced a recently arrived rose gold Tri-Compax with delicate leaf hands. 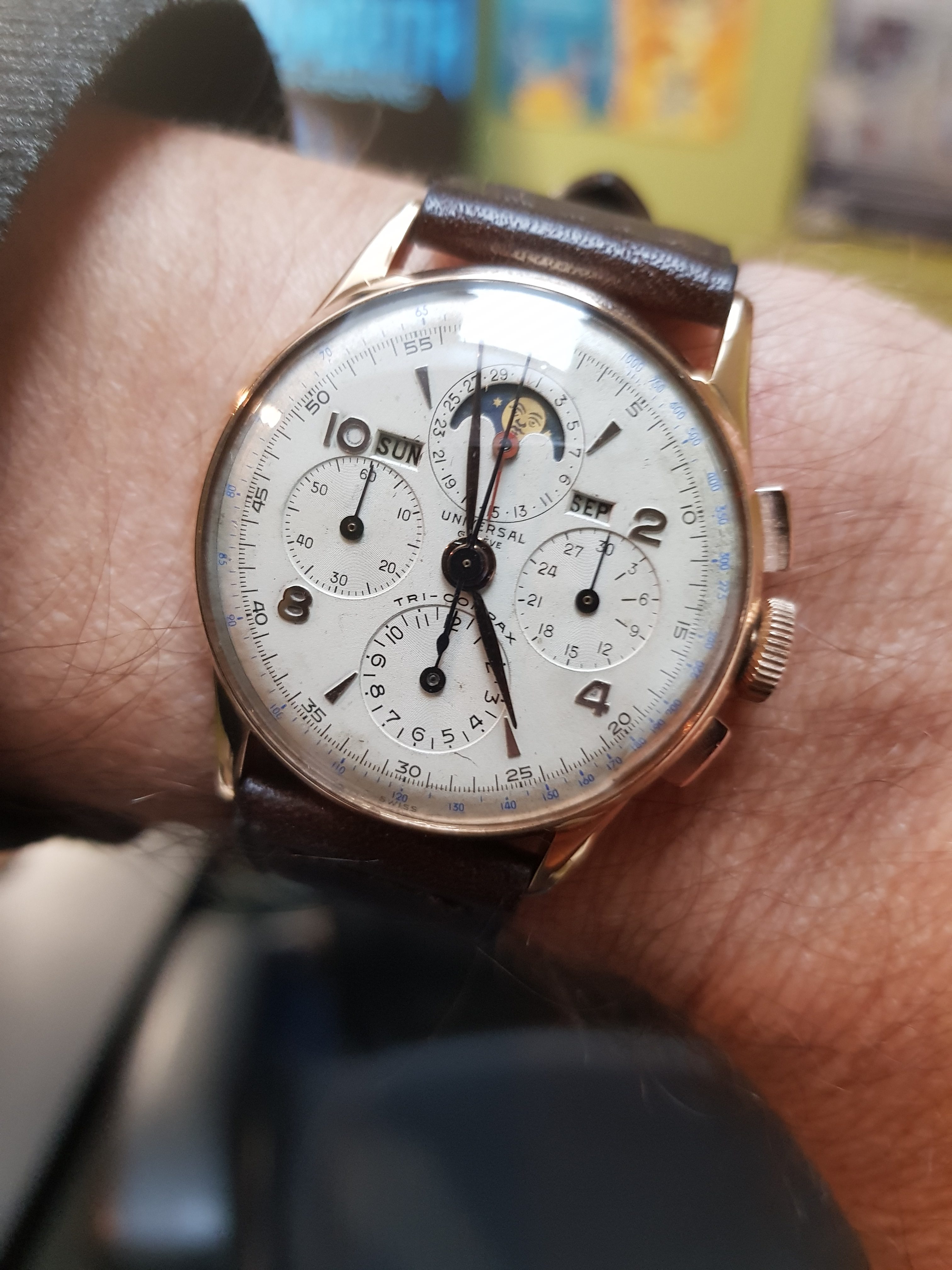 Now, we’ve all had moments when, after admiring a watch from afar, seeing in the metal has proved profoundly underwhelming.

This was not one of those moments.

It was the most beautiful watch I had ever tried on. By a stretch.

But it was Milan. In a shop with no online presence. I had no money. And a plane to catch. So, I had to hand the watch back. A couple of (very bad) photographs were my only souvenir.

Besides, Tri-Compax collecting guru – @markthetime – later warned me to be wary of badly refinished dials. It was a timely reminder of something I’d learned through my Polerouter hunt: with vintage you need to do your research. Listen to the doubts in your head. Consult with people who know more than you. Be patient. And, most important, be careful.

After that, I did all the usual things. Ebay alerts. Chrono24 searches. Occasional tyre-kicking of watches stocked by Parisian dealers charging Parisian prices. Because there were so many references, I saw a multitude of great Tri-Compaxes, but not quite the exact combination I’d seen in Milan. I stocked up the piggy bank for the possibility of finding one, but wasn’t sure the opportunity would come.

And then, late on a Sunday night a few weeks back, @markthetime tipped me off to a piece on offer. It was a late 40s reference in rose gold, with leaf hands, a warm patina, and in amazing condition. The seller was @dandywatchman, whose UG collection makes a vintage watch geek go weak at the knees. 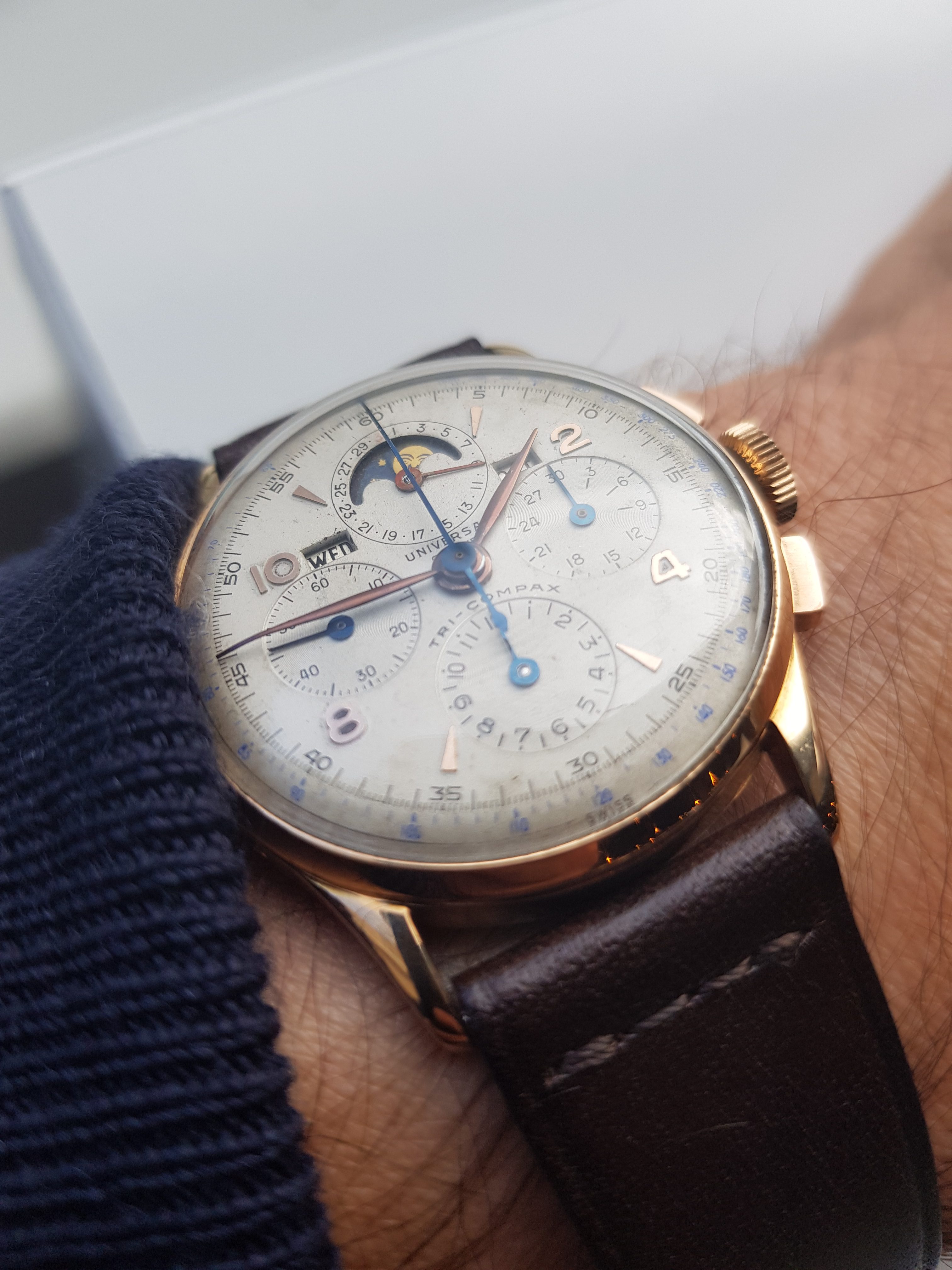 The deal was done with @dandywatchman, a great guy who was generous with his time and experience – and happy to chat watches while everything came together. And, for its journey from the US to Ireland, he promised to pack it to survive any sudden warfare on the way over. 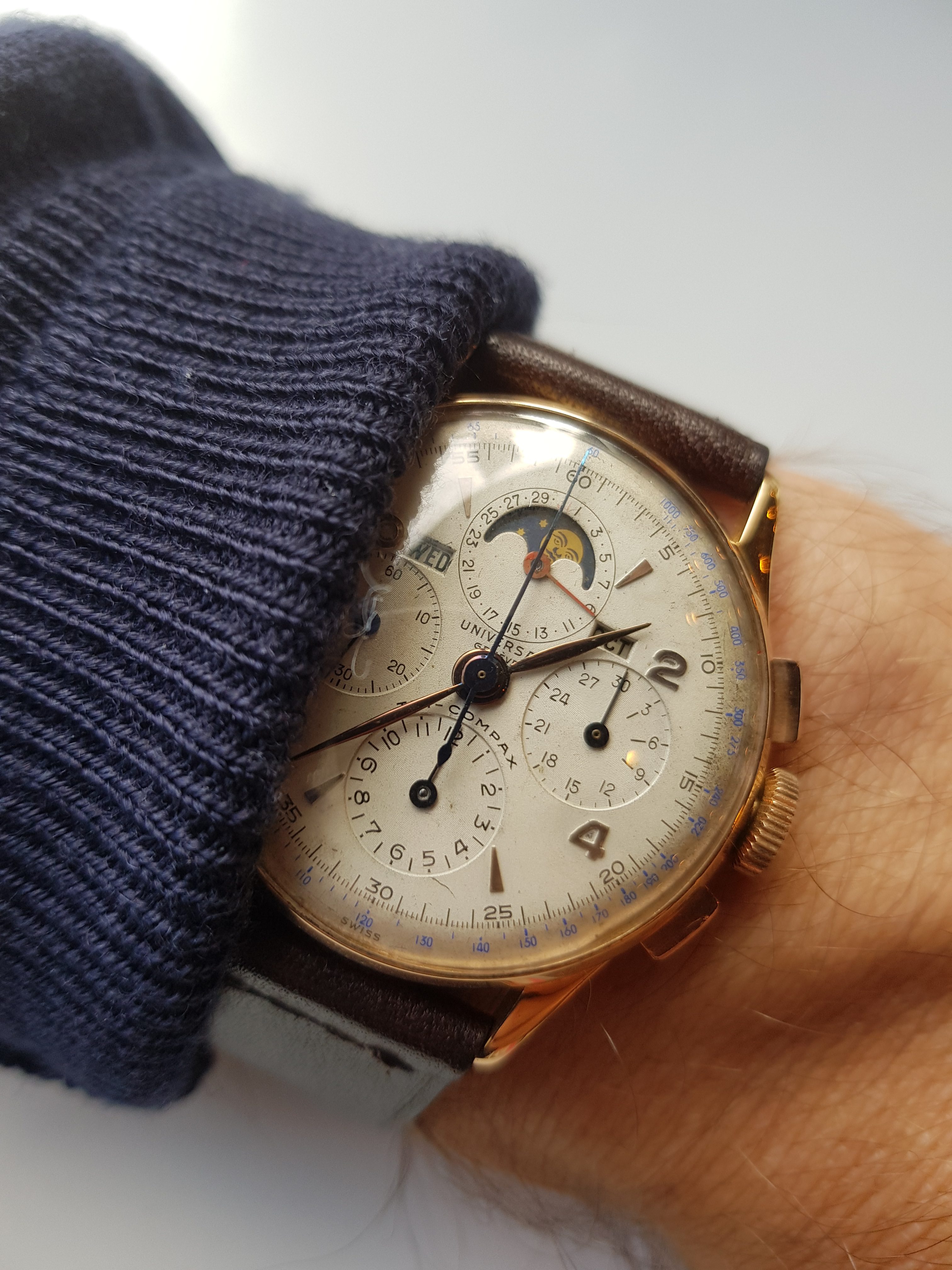 The greatest fear in those days waiting for the bomb-proof package was that in the cold light of a Dublin day the fleeting tryst with the Tri-Compax in Milan would turn out to be nothing but a passing fancy. I worried the piece I’d bought wouldn’t live up to the memory.

I needn’t have worried.

The Tri-Compax is on my wrist right now and I would be lying if I said I haven’t spent an unhealthy amount of time just staring at it and muttering to myself like a loon about how great it is. It is indeed the most beautiful watch I’ve yet to wear. And I’m very lucky that this time I don’t have to hand it back.

Also check out @markthetime and @dandywatchman for their exceptional vintage collections.