Two icons. Two classics. Two absolute kings (pun intended) in their respective fields. The Rolex Explorer I and Rolex Submariner are two of the best sports watches available today. The real question though is how they stack up against one another. Which is the better watch? Which watch would be a better first Rolex? All these and more have been commonly asked questions on Instagram. So, let’s get into it. 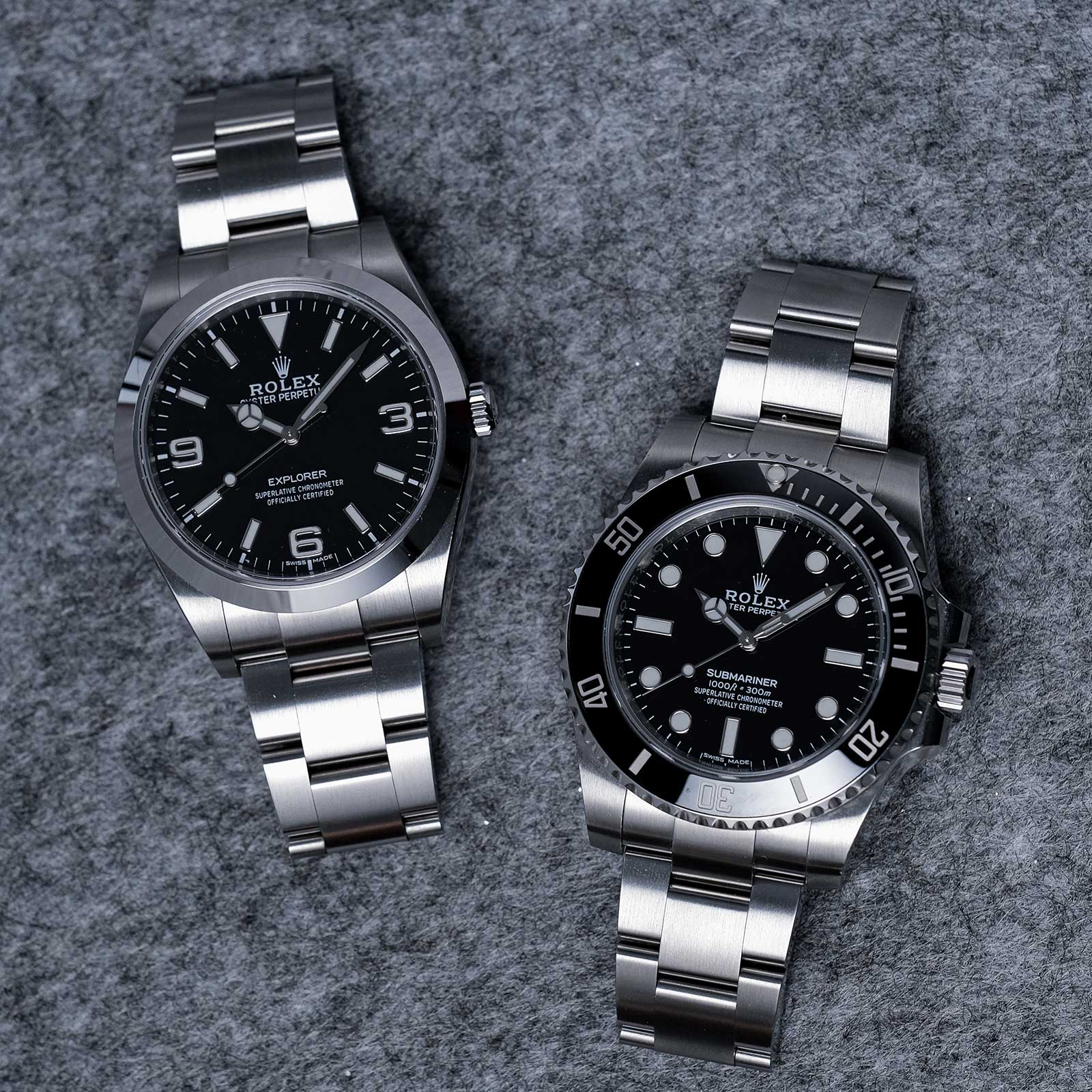 The respective histories of both watches have been written about ad nauseum and far better than I ever could. Suffice to say, 1953 was a key year for both. They allowed Rolex to claim the tagline “From the top of the world to the bottom of the sea”, even if it was actually only 100m, less if we get into the technicality of what 100m water resistance actually is. On a slight tangent, the bottom of the sea is yet to be conquered with Omega having overtaken Rolex just recently. Over the years since 1953, there have been multiple iterations of both watches, with the Explorer I reference 1016 and the Submariner’s 5513 being arguably the most iconic references. Along the way, however, the two watches took separate paths. The Submariner took the world by storm en route to becoming arguably the most well-known watch in the watch community at least. It’s usage by the British military cemented its place in history books while features in the early iterations of the Bond movies among others certainly helped it further along. The Explorer I on the other hand never really topped the peak that it had scaled with that first Everest expedition. It, therefore, remained under the shadow of the more popular watches in the sports category that it had ironically been the father of. Still, it has always been a strong classic feature in the Rolex line-up and has carved a place of its own in the collections of and on the wrists of watch lovers around the world. 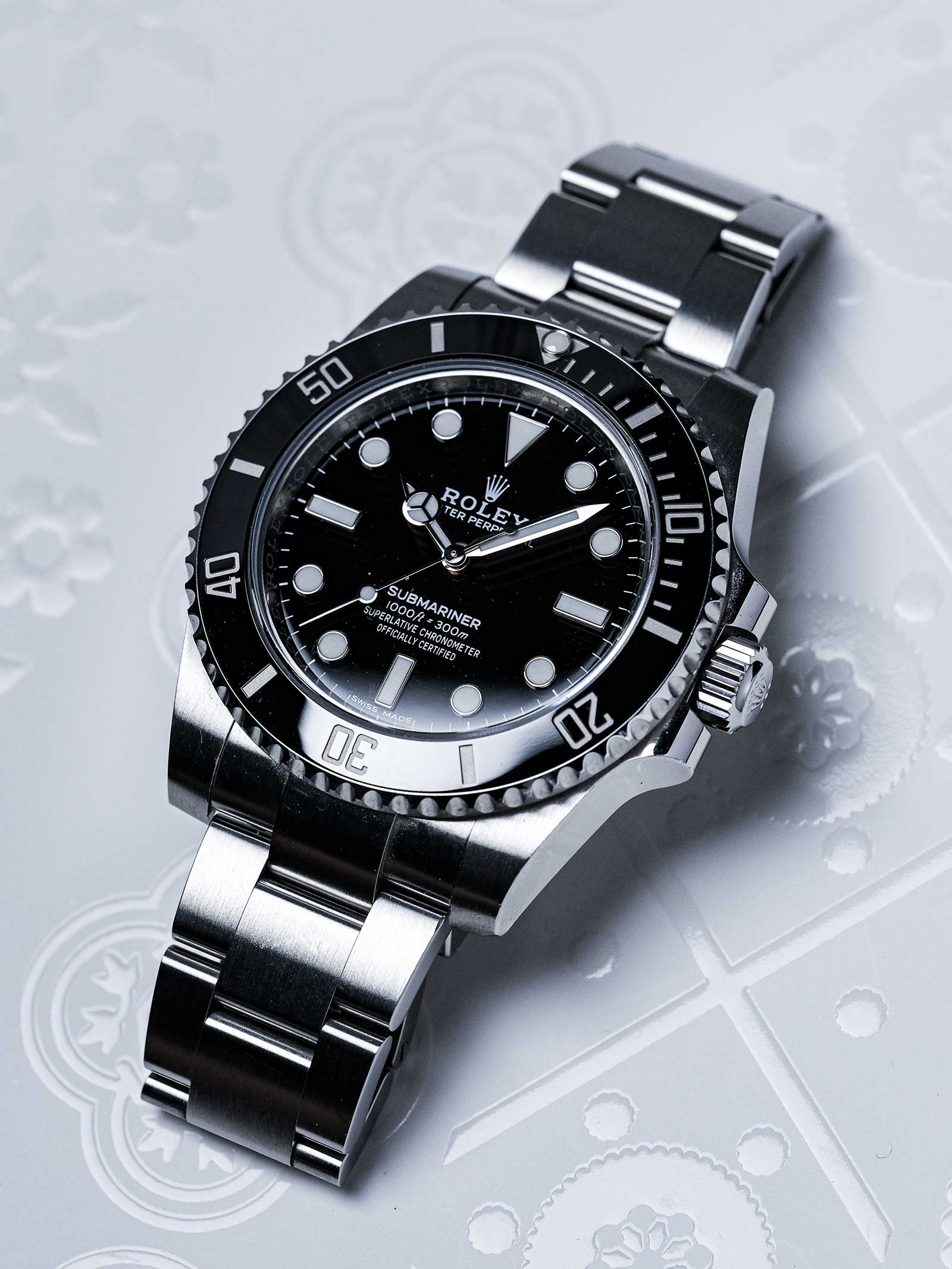 Although their histories may not dictate the better watch, the journeys these two watches have taken play directly into the characters of their modern iterations. The Submariner was quick to jump from its more modest 36mm in 1953 to an enlarged 40mm 1959 which it has remained at ever since. It then continued to beef up with what is affectionately known as the “super case” and its accompanying “maxi dial”. Chunkier lugs, wider crown guards, bolder fonts, and a shiny ceramic bezel define the latest modern Submariner reference 114060 which was released in 2012. Undoubtedly, the vast majority of the updates to the Submariner throughout the years have been for functional purposes. The highly vaunted Glidelock clasp that allows on-the-go adjustments was an amazing addition to the Submariner because of the additional comfort that it offered. However, whether by design or not, the evolution of the Submariner also resulted in greater wrist presence, particularly with the current modern version. The aforementioned defining features that center on its deep glossy dial draws the eye to this beauty on the wrist without ever being too overwhelming. 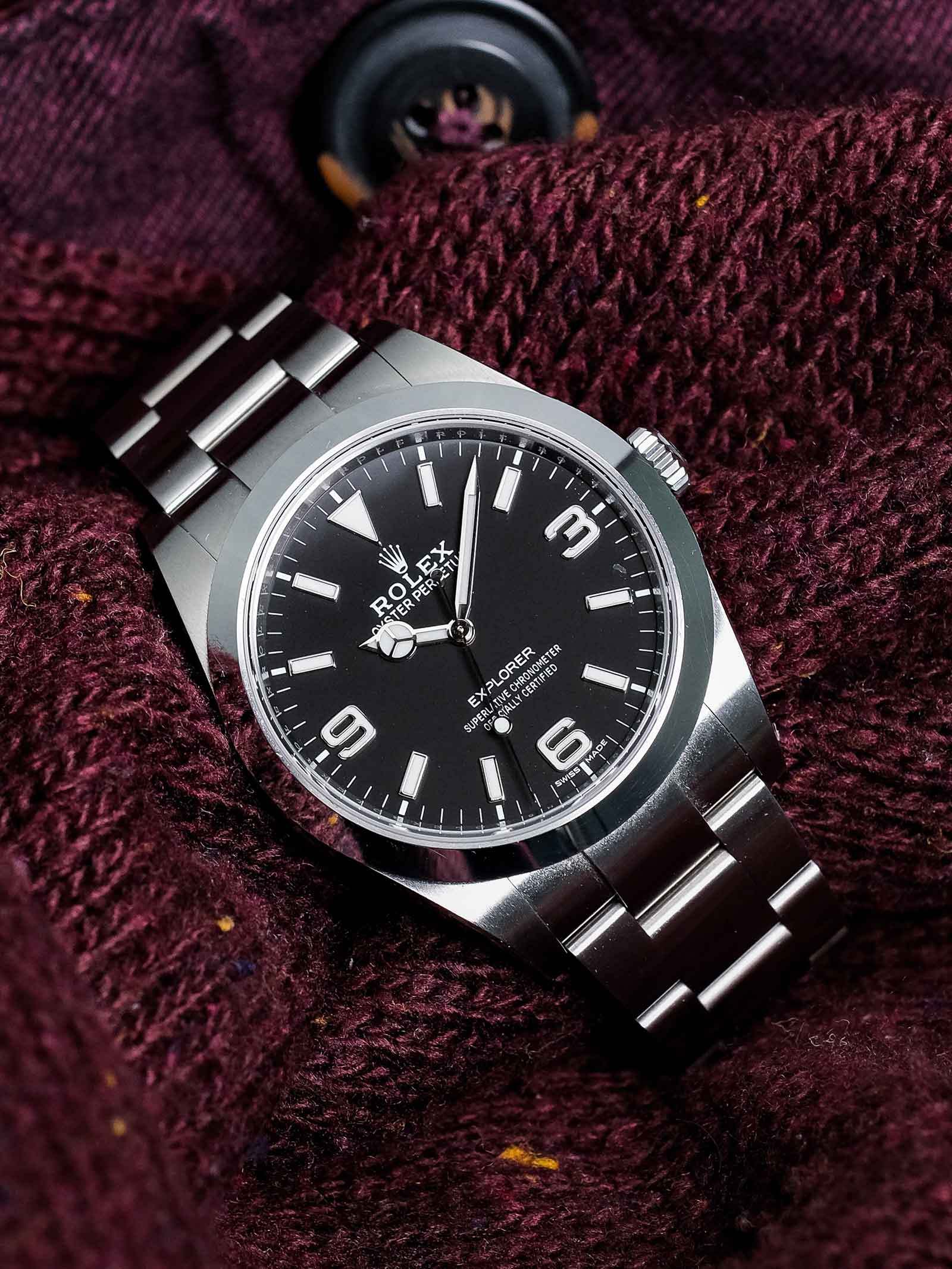 The Explorer on the other hand, took its time in upsizing, keeping to a perfectly sized 36mm for most of its existence up till 2010. Even then, when the trend of big watches was in full swing, Rolex deemed it fitting to keep it as its smallest sports watch at 39mm. More critically, it never adopted the “maxi” proportions of almost every other sports watch in Rolex’s line up; the only other model is the Daytona.

In not beefing up, the Explorer retained its beautiful proportions apart from the short hands on the first upsized version i.e. the reference 214270 Mk 1. It seems almost unfair that its most distinctive feature, in my opinion, is what was not done to it. It distills a watch to its bare essence, yet retains just enough iconic distinctiveness with its 3-6-9 that break up the monotony of the dial. The Explorer is the epitome of less is more that is would make a solid foundation for any collection. 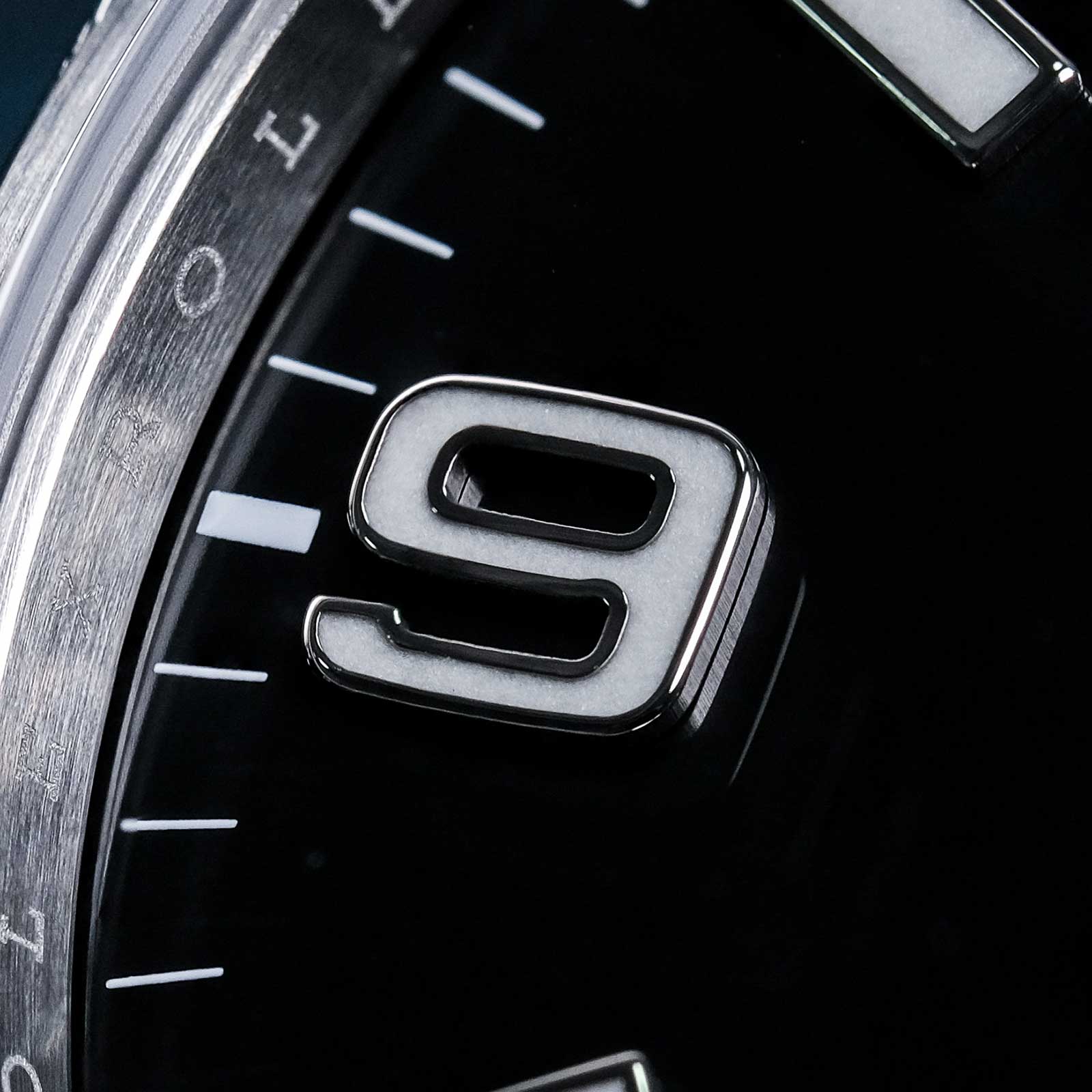 Functionally, the Submariner is probably the better watch, with an amazingly comfortable clasp that should really be on every one of Rolex watches. It has a better depth rating of 300m versus the Explorer’s 100m. The Submariner’s scratch resistance of the ceramic bezel also trumps the smooth polished bezel of the Explorer that picks up scratches almost as easily as the oft critcised polished center links of the oyster bracelets on other models. Fortunately, both these watches feature brushed center links though they too are in no way scratch proof. The only feature in which the Explorer bests the Submariner is in its movement. That was because Rolex for some reason never upgraded the Submariner’s 3130 calibre to the later 3132 calibre which features a Parachrom hairspring. In English, the Explorer’s 3132 calibre should prove more resistant shocks and extreme conditions which in turn makes it more suited for exploration. 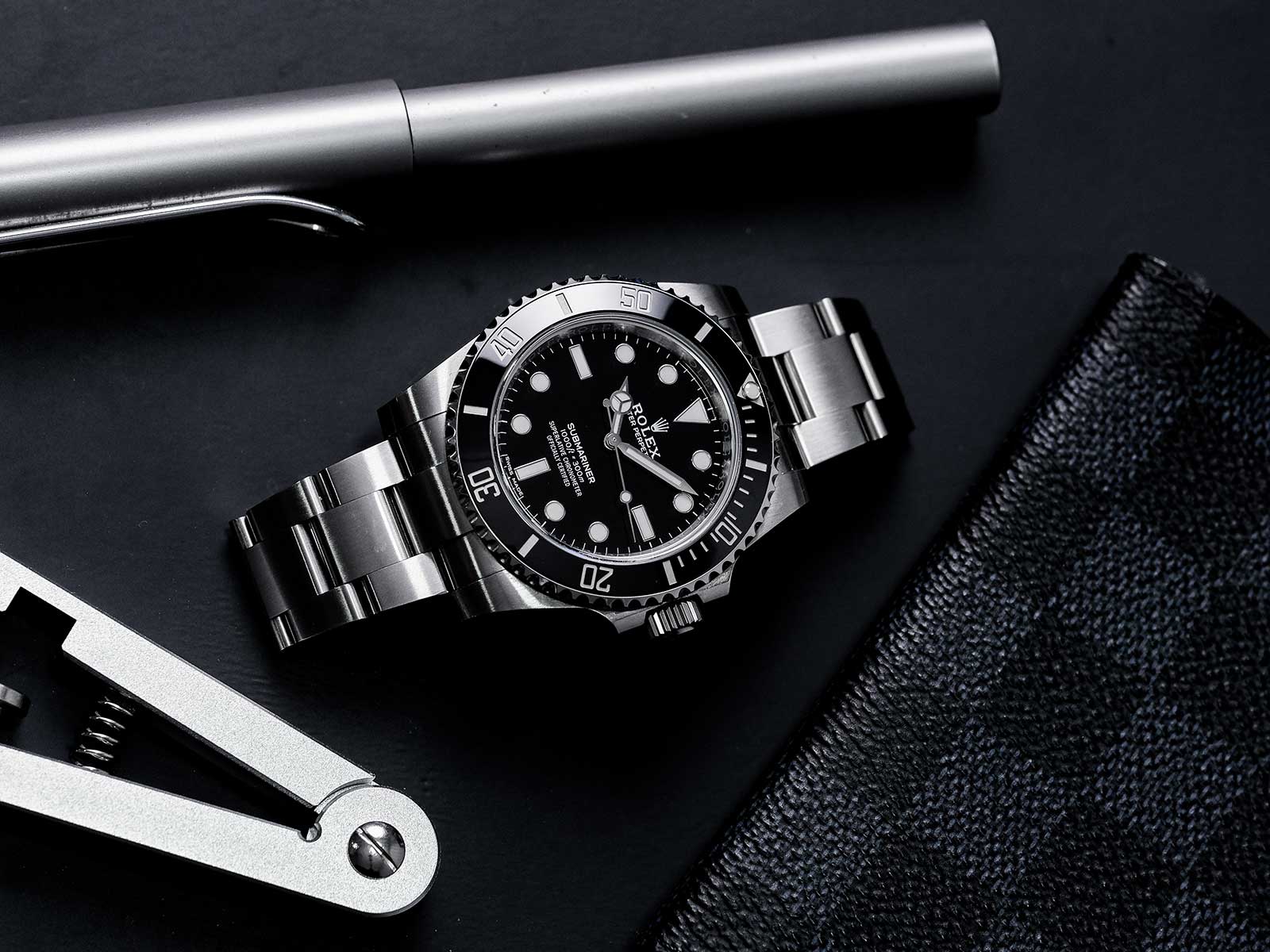 The Submariner also absolutely dominates the Explorer in terms of popularity. Today it is easily the most copied watch in terms of fakes and homages, and for good reason. It bears a classic design that will never go out of style and in the ever laxing rules of men’s fashion, has become suitable for most occasions. In quick stroll around the business or shopping districts over here in Singapore, one can easily spot that Submariners form the vast majority of those who don luxury watches. Look for an Explorer, however, and one would be hard pressed to find more than a handful if any at all. I may be wrong, but I would wager that this scenario would likely repeat itself around the world. 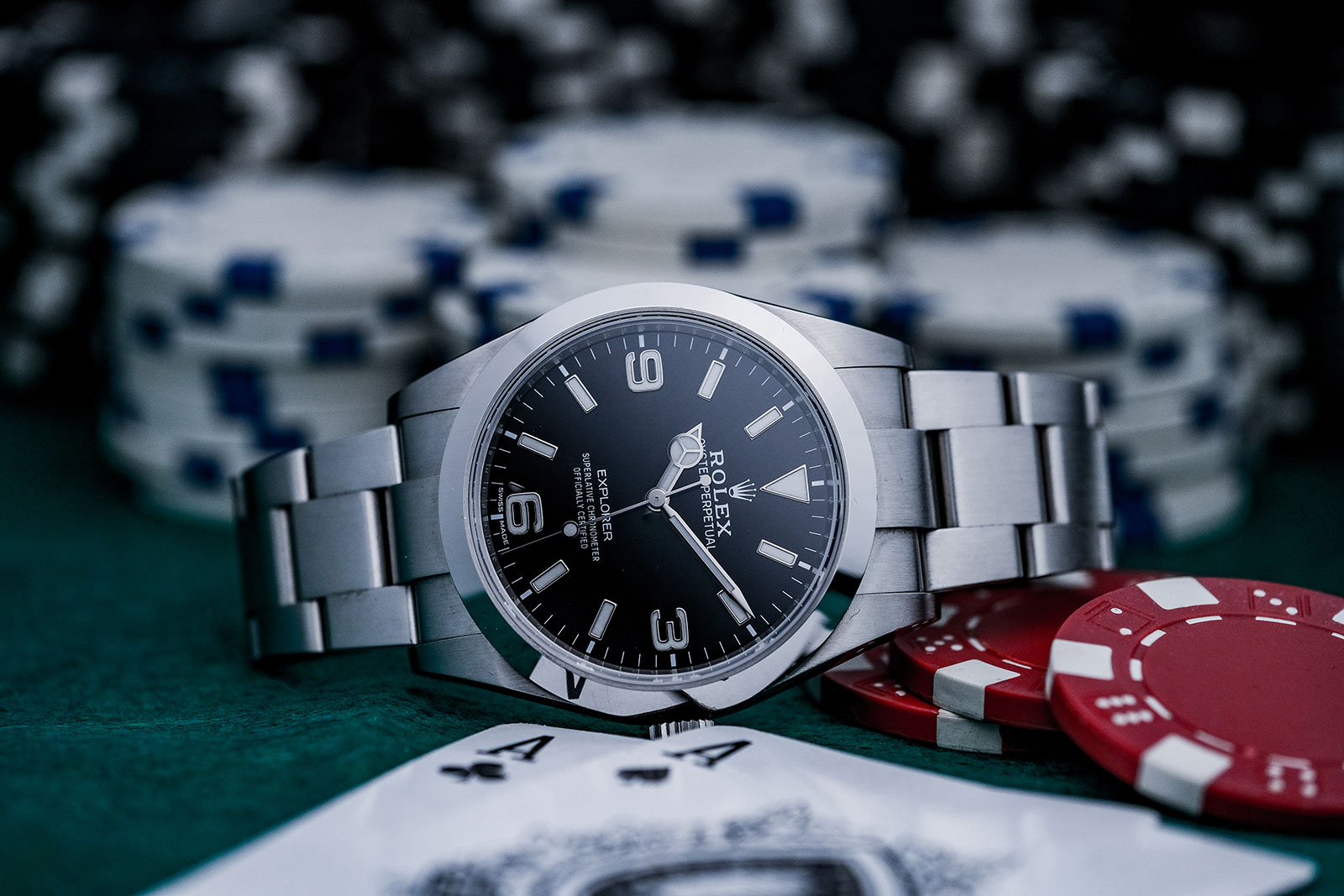 Ultimately though, objective statistics, specifications, and facts can never decide what watch one prefers. Instead, it is how the watch wears and makes its owner feel that determines it. And for me, the Explorer’s elegant slim proportions wears far better on my 6.5” wrist as compared to the bulkier Submariner. While bearing only a 0.5mm difference in thickness, the Explorer’s curvy sides that makes it feel substantially thinner than the Submariner’s 12.5mm. This coupled with the way the lugs curve to sit flush the wrist makes this the better watch for me. Moreover, the fact that it is absolutely unpretentious suits my daily office life more appropriately than the Submariner. Its understated nature may be boring to some, but to me, it is its most valued characteristic. On the other hand, the Submariner’s increased wrist presence makes for wonderful casual Fridays and weekends. It bears a more casual flashier vibe when compared to the Explorer and elevates even the most laidback of attires. Together they would make one of the best two watch collections around. Still, as much as I love the blocky masculine look of the Submariner, the Explorer to me is a more complete watch that will never feel out of place. It is as un-Rolex a watch as modern Rolexes go given Rolex’s direction towards more luxurious tool watches. However, it also imbues all the attributes that defined Rolex since the beginning; beautiful, timeless, reliable functionality. 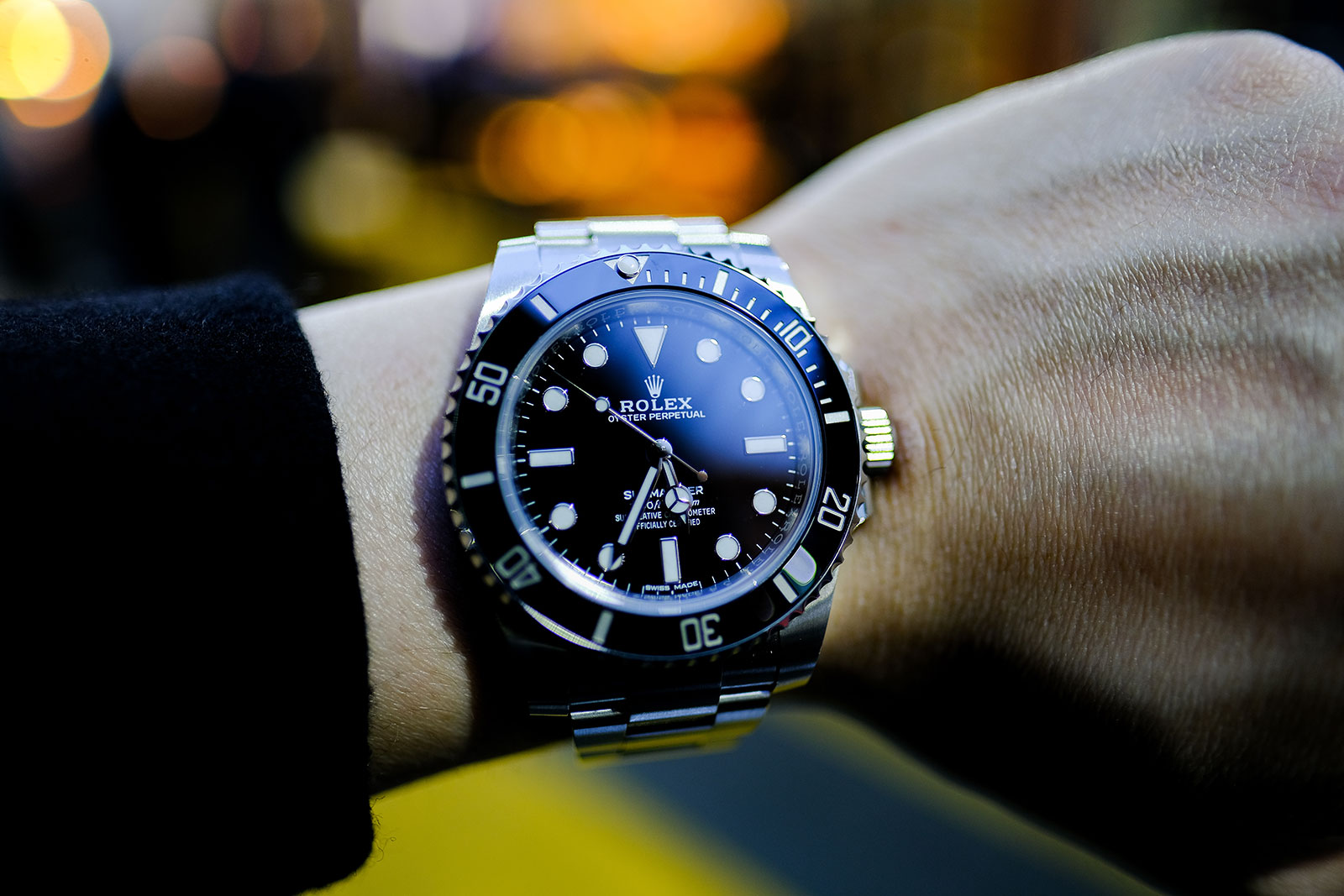 The Explorer may never draw the attention the way that the Submariner does, but it doesn’t need to. It is very much its own watch and is right at home anywhere at any time. The Explorer is simply a classier more elegant watch. It bears a quiet confident charm that grows on you. Its simple understated beauty draws you in. The Submariner may be Rolex’s most iconic sports watch, but the Explorer is to me the quintessential Rolex sports watch. 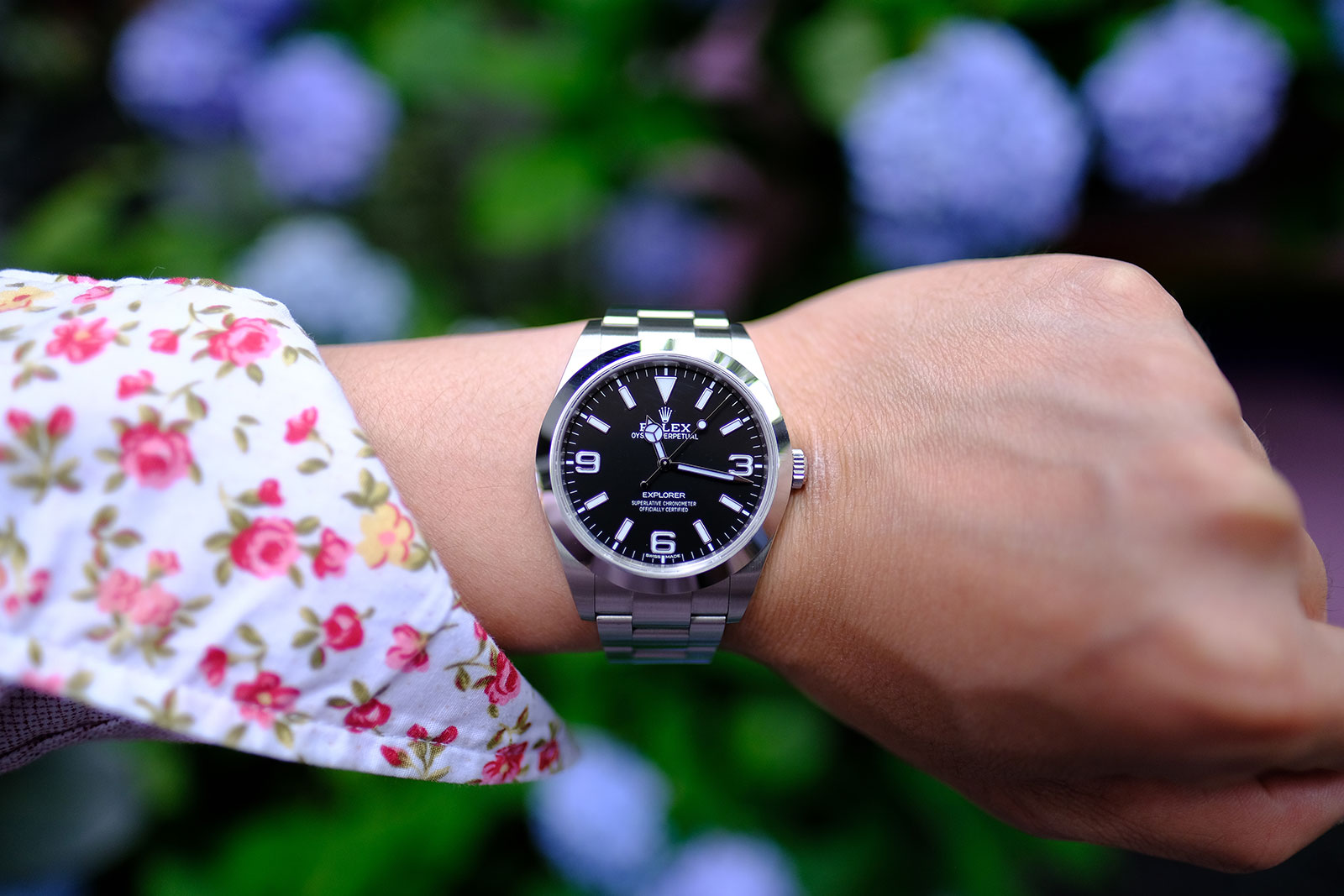 Writer’s Note: Before the pitchforks come out, I’d like to qualify that had this been a review of the Submariner on its own, one could argue that the same attributes of versatility and simple class could be ascribed to it. However, because it is a comparison, it particularly loses out in these areas to the Explorer. Cheers. 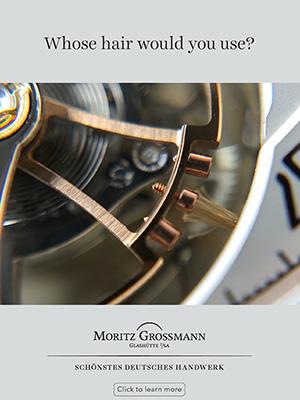