When I first saw that Hodinkee had announced a collaboration with Oris, I knew I had to try to get my hands on one. Typical of Hodinkee, the announcement was cryptic, and only featured a date and the Oris logo. That doesn’t really give you much to go on, to say the least.

But if you haven’t been living under a rock for the last few years, you’d be hard-pressed to deny the revival of pared-down styling and proportions that Hodinkee (amongst others) have spearheaded. From selling vintage watches on their online platform to collaborating with mainstream brands such as TAG Heuer and Omega, the New York-based website has been an undeniably massive influence in how the current watch industry is shaping up.

The past few collaborations that the “Dink” produced were, to me, clear winners. Every watch designed either improved on the original, or at least didn’t make it any worse than the analogous model. To me, the design language that Hodinkee imparted on these watches was very much to my liking – reducing clutter, focusing on the very elements of the watches that made them so great.

When the watch was released, I was online and waiting with my credit card. As soon as I saw it on the website, my first thought was that it was EXACTLY what I expected. A vintage-styled, no-date version of a favourite by a well-respected brand. The pictures on the website showed a subtly faded bezel and creamy faux-patina, which I loved the look of. It was a no-brainer, and although the price of $2,300 was a little high, I was able to justify it. After a little indecision on whether to spend any money at all on a faux-vintage watch when I had been lusting after a vintage Submariner, I realised that this was a now-or-never moment, and if I wanted the chance to get one without paying a premium I would have to make the decision then. And so, $2,300 left my account, and my watch was on its way. 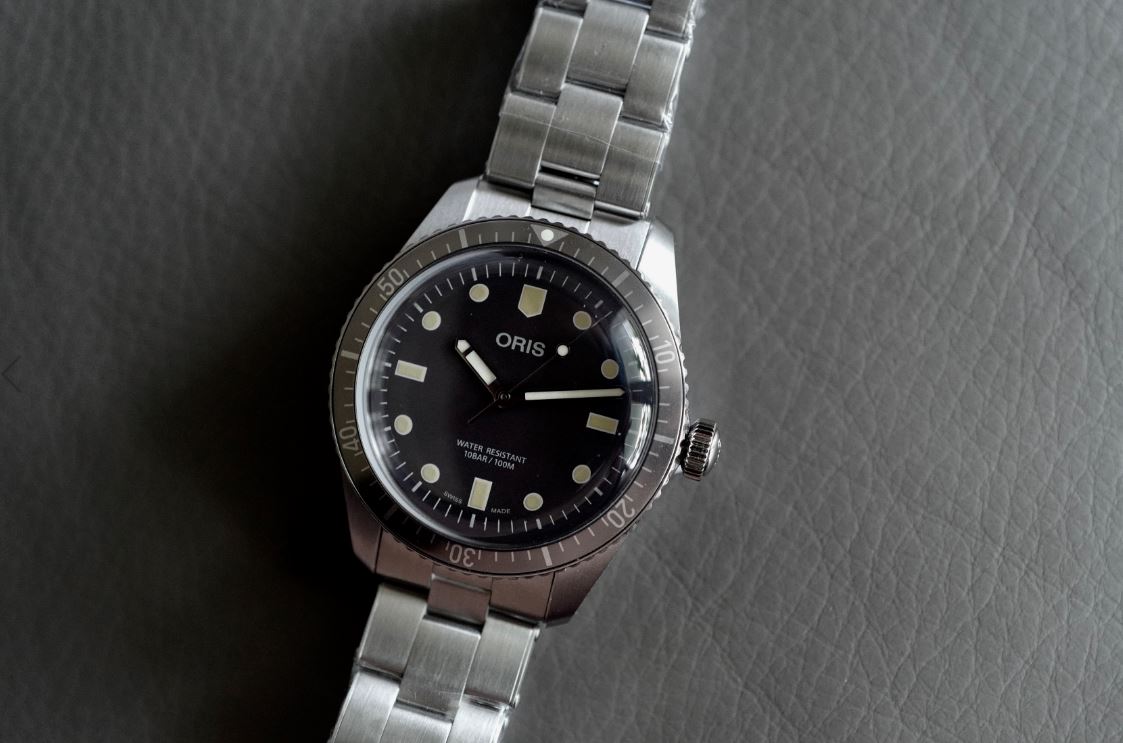 The watch itself is 40mm in diameter and 11.8mm thick. While this sounds ideal on paper, this ended up making the watch wear quite large. As I suspected, the simplicity of the dial didn’t help, and made it look even larger. I understand that this watch is a modern timepiece through and through, but I couldn’t help but think that such vintage styling would work far better on the midsize 36mm case that Oris also produces for the Diver Sixty-Five. It would have made for a more balanced watch, and stayed true to its vintage aspirations. 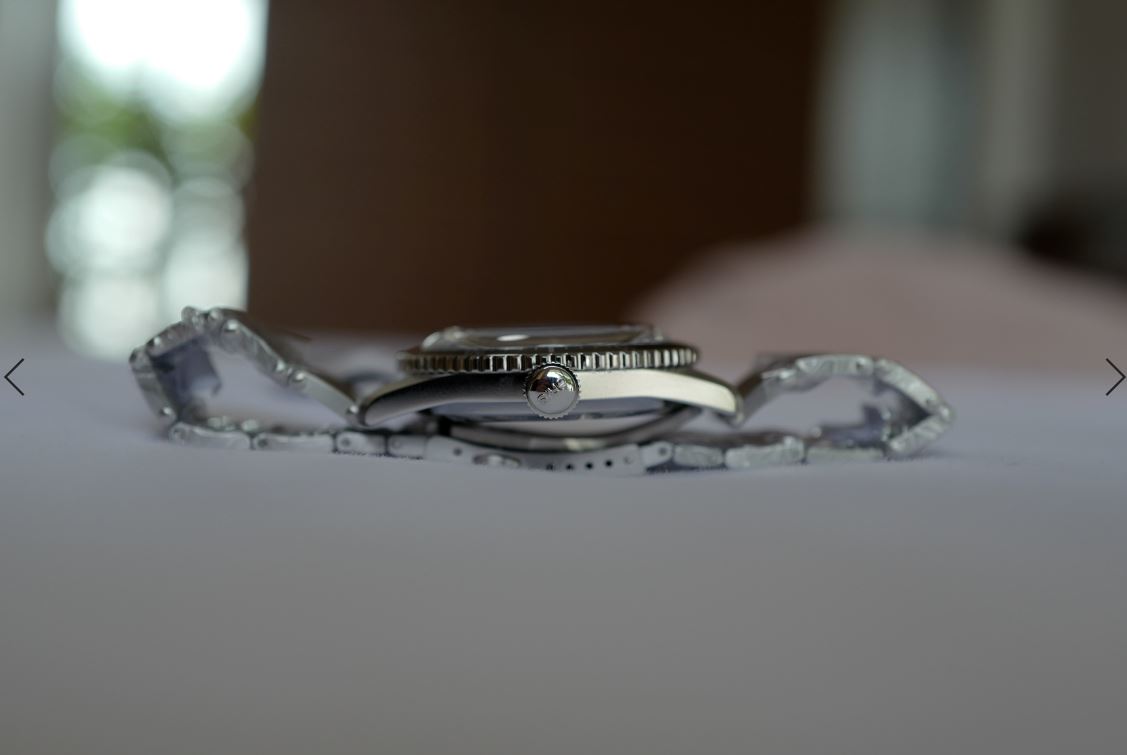 A pleasant surprise was how well the thickness of the watch represented itself on my wrist. 11.8mm is rather slim for a dive watch, and putting it on I was reminded of how a Rolex 5508 or 6536 felt. The 5508 and 6536 are some of the first Submariners made by Rolex and featured a guardless small crown and feel incredibly svelte on the wrist. While the Oris was able to mimic the feel of a relatively slim divers watch, the 40mm case size limited the suspension of disbelief that it was a true vintage watch.

Unfortunately, when taken together, the slimness of the case and the 40mm diameter made for a reverse gestalt effect – combined, it made the watch feel disproportionately large and unwieldy. Putting it on the wrist hammered home the point – I just couldn’t feel any love for its proportions. 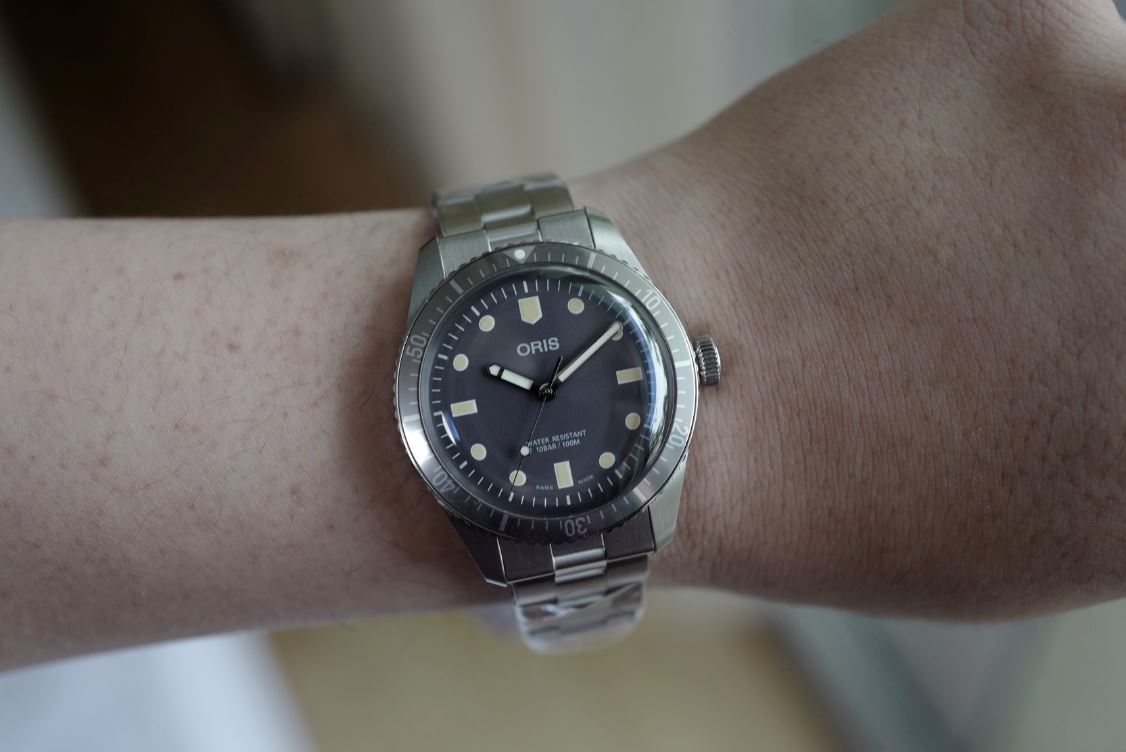 The colour scheme of the watch in person was a little different from the promotional photos. Instead of a strong contrast between a dark charcoal dial and a ghosted bezel, the watch was, for the lack of a better word, grey. In most lighting conditions, the dial and bezel were far closer in tone than the photos suggested. The faux-vintage lume helped somewhat by acting as a contrast against the grey, and prevented the watch from being an overwhelmingly grey blob.

One of the biggest issues I took with the watch is the bracelet. Although flawlessly constructed, it tapered rather violently from the lugs to the clasp. Whilst I understand the desire to stick to vintage styling and proportions, I found that it made the watch feel too top-heavy, and made the already-disproportionate case shape even worse. If the bracelet had tapered from 20mm to 19mm or even 18mm, it would look and feel far better. Seeing pictures of the watch on NATO and leather straps greatly improved its aesthetics, in my opinion. 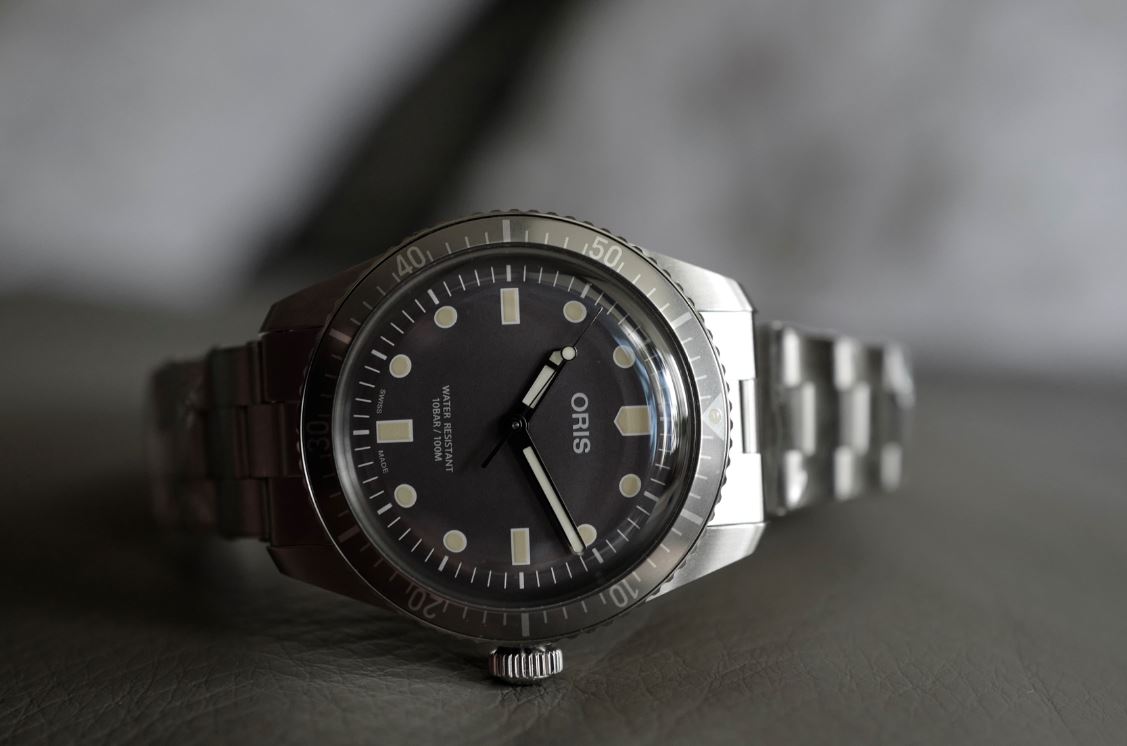 I know I may sound all doom and gloom talking about this watch, but this watch has many good points as well. Firstly, the trademark Oris quality was present, and it easily felt like a watch costing twice the price. From the solid construction of the case and bracelet to the smooth-yet-satisfying feel of the crown winding, Oris definitely did not disappoint in this department.

Another unexpected thing I really enjoyed about this was the manual winding. I had some doubts about a screw-down manual wind watch, but they went away as soon as I tried winding it in person. The action was smooth and easy to wind but had just enough feedback to make the whole process deeply satisfying. Hearing the quiet clicking of the mainspring being wound up was almost therapeutic, and was something you could definitely look forward to doing every morning.

Finally, the dial itself looks great. The markers complemented the faded black dial quite well and would be perfect if only there was more contrast between the bezel and dial. The lack of a date window, being one of the main reasons I bought the watch in the first place, lent a sense of symmetry and simplicity that I just adored. Although it wasn’t a revolutionary thing for Oris to do, removing the date window was definitely a nice touch. 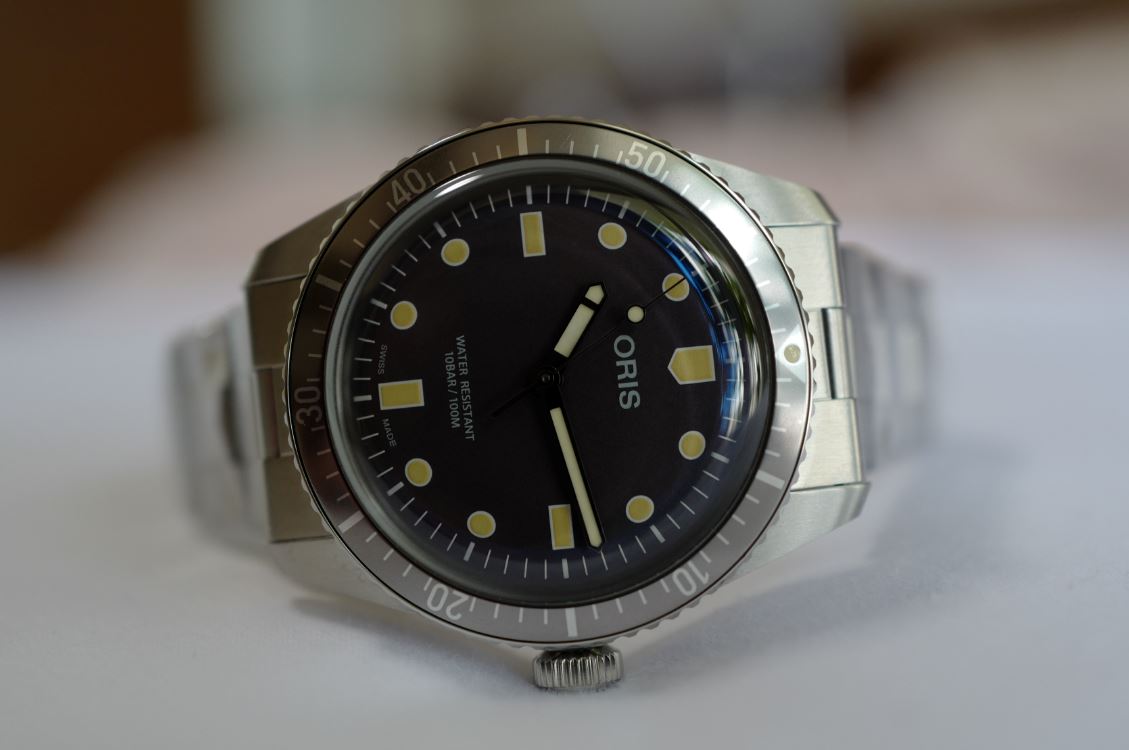 To sum up, the Oris Diver Sixty-Five Hodinkee LE is a watch that is just so close to being a perfect dive watch in the £2,000-3,000 range. The attempt at vintage styling is done expertly in parts, but overall the watch is just too much of a mishmash of vintage and modern, most notably in the design choice of the bracelet. At this price point, the competition from other watches is strong, and watches like the Tudor Black Bay Fifty-Eight come to mind as a worthy comparison. However, the build quality can’t be overstated, and it is overall a solid choice for a vintage-styled diver at the current price.

Why I’m letting it go

In the days after the launch, I began to doubt my purchase. Was a 40mm watch too big, especially with such a clean dial? Is it really logical to spend $2,300 on a watch that retails for far less, just to get a manually wound movement yet still have to deal with a screw-down crown? How would the faux-vintage work on a watch with decidedly modern proportions? I debated whether to cancel the purchase and refund my money, but decided against it, reasoning that I hadn’t even seen it in person yet.

As soon as I saw a picture of the watch being posted by a member of the Hodinkee staff, I realised that some of my concerns were valid. The watch seemed slightly too large for the styling, although it wasn’t something I thought was a deal-breaker so I still didn’t request a refund.

Two weeks later I had decided, through a long and laborious process that involved a lot of browsing Chrono24 and internet forums, that my next watch would be a vintage Tudor Submariner. Talking to Paul, an expert on vintage Tudor and a fellow Scotland-based watch geek, I narrowed down my choices to a 7016 and a 9401/0. After a quick look at the prices, I suspected I couldn’t justify holding on to the Oris as well as dropping upwards of £7,000 on another watch. By the time I came to this realisation, however, I got the notification that the watch had shipped and was on its way to me.

The next day, I received a call from FedEx. I was informed that a lengthy and painful customs process was awaiting me, with an estimated total of close to £500 in customs taxes and other fees. I was to leave for Tokyo in three days, but decided to get the ball rolling.

While I was in Tokyo, I decided to take a look at the vintage shops to see if there were any Tudor Submariners lying around. Over two days of visits to shops and dealers across Tokyo and countless Google-translated questions, I came across an absolutely beautiful and unique 9401/0 at a fair price and with a chance of having military provenance. Although that story is for another day, I ended spending quite a fair bit on it and realised that there was, A) no room in my collection for the Hodinkee issue Oris, and 2) no way I could justify holding on to $2,300 in a watch I didn’t even love.