Ain’t it a bollocks when real life gets in the way of the important stuff. There’s me compiling work report after report whilst top pics has been waiting to be written, well enough is enough, the time is now.

Time, that commodity we can’t affect but we invest so much into. Over the decades we have seen many different ‘times’ or eras come and go. The Time of the pocket watch, the mechanical watch, the quartz, the oversized, the rose gold watch, the bronze.

Our tastes and needs ebb and flow with time as with it so does our consumption, we have entered another era now, one which looks to be reaching it’s zenith (pun)…The Time of EIB. Who the eff is EIB I hear you say; it is not who but a what. The EIB is the enthusiast independent brand, what many call the microbrand.

Some recoil from the title microbrand as having a negative connotation, but I disagree. Micro in this context evokes small batch, crafted, thoughtful, somewhat hard to get. I liken watch microbrands to coffee micro lots, yes we can consume a cup of instant, but if it’s a single origin, ethically grown, small batch, then it is savoured all the more.

The same can be true of the enthusiast independent brands (EIBs), whereby small operations (often single or two people) put all their passion and know-how into giving the watch community a product they feel is lacking in availability.

Roll back three short months and I will confess to knowing little of brands such as EMG, Aevig and Nodus, but they are all firmly in my headspace now. The latter in particular I went from introduction to ownership in under six weeks and couldn’t be happier with the Contrail and the service from the brand. 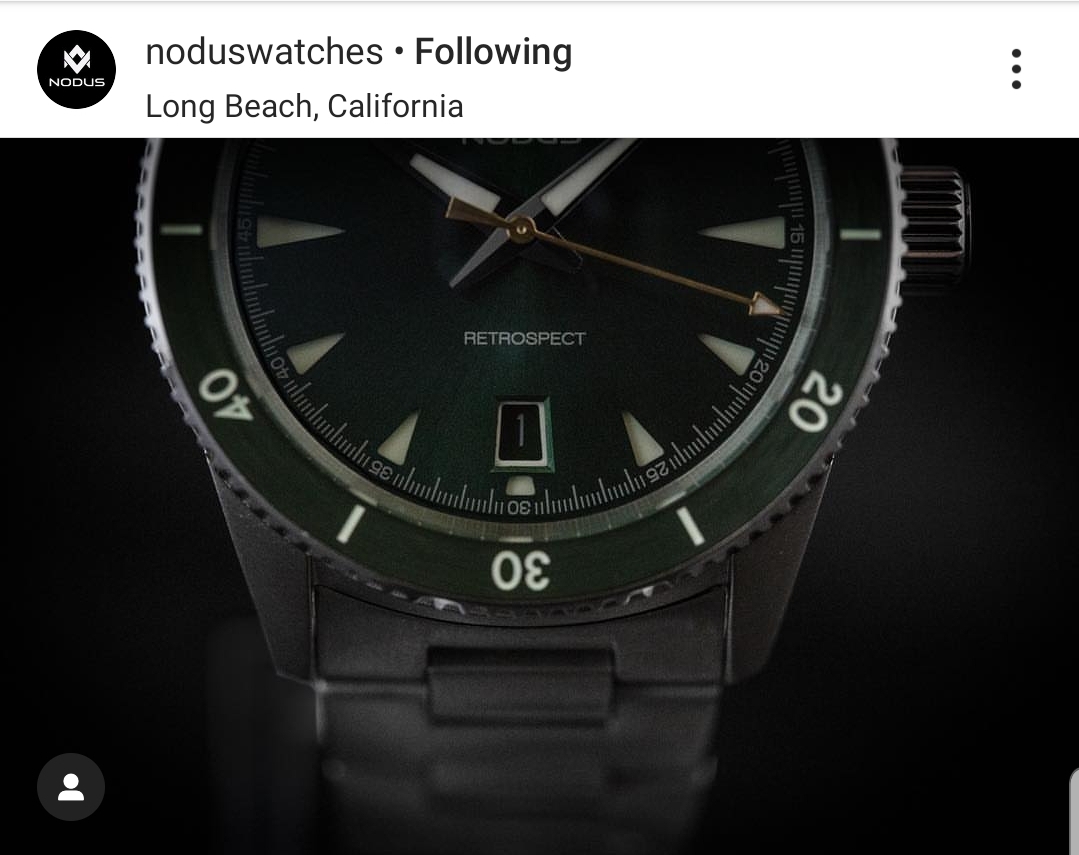 The EIBs give us the opportunity to search and buy into a brand that matches our ethos. The distance between potential customers and brand owners is a much smaller gap than in the more established brands, and let me tell you if u get the head honcho of an independent brand talking to you, it resonates and makes you feel like you matter.

One brand I will confess to knowing about previously is Halios, the brand has a strong following amongst the Scottish watch community and the watches receive rave reviews. That is countered by their scarcity and some challenges in getting their model, all Kudos to the product and its popularity.

The latest Halios releases were the much-anticipated bronze version of it’s most iconic model, the Seaforth B. Just read the comments boards and you will see those in ecstasy at their name being allotted beside a watch interjected by the anguish of those who long for one.

Halios for many is the template of this new movement of watch brands. I did once say if Jason Lim, (Halios owner) was ever kind enough to submit a post to us it would break Halfwatchtuesday, well it looks like he went and broke Instagram (that’s the reason I’m giving for the outage and I’m sticking with it. Jason did what we should all do with our watches and has a bit of fun, trolling us all with an unforeseen orange version of the Seaforth B the ‘Ambiguité’, unforeseen because it doesn’t exist, but that hasn’t stopped orders coming in for it. Hats of to Halios watches and many thanks for joining our small party. 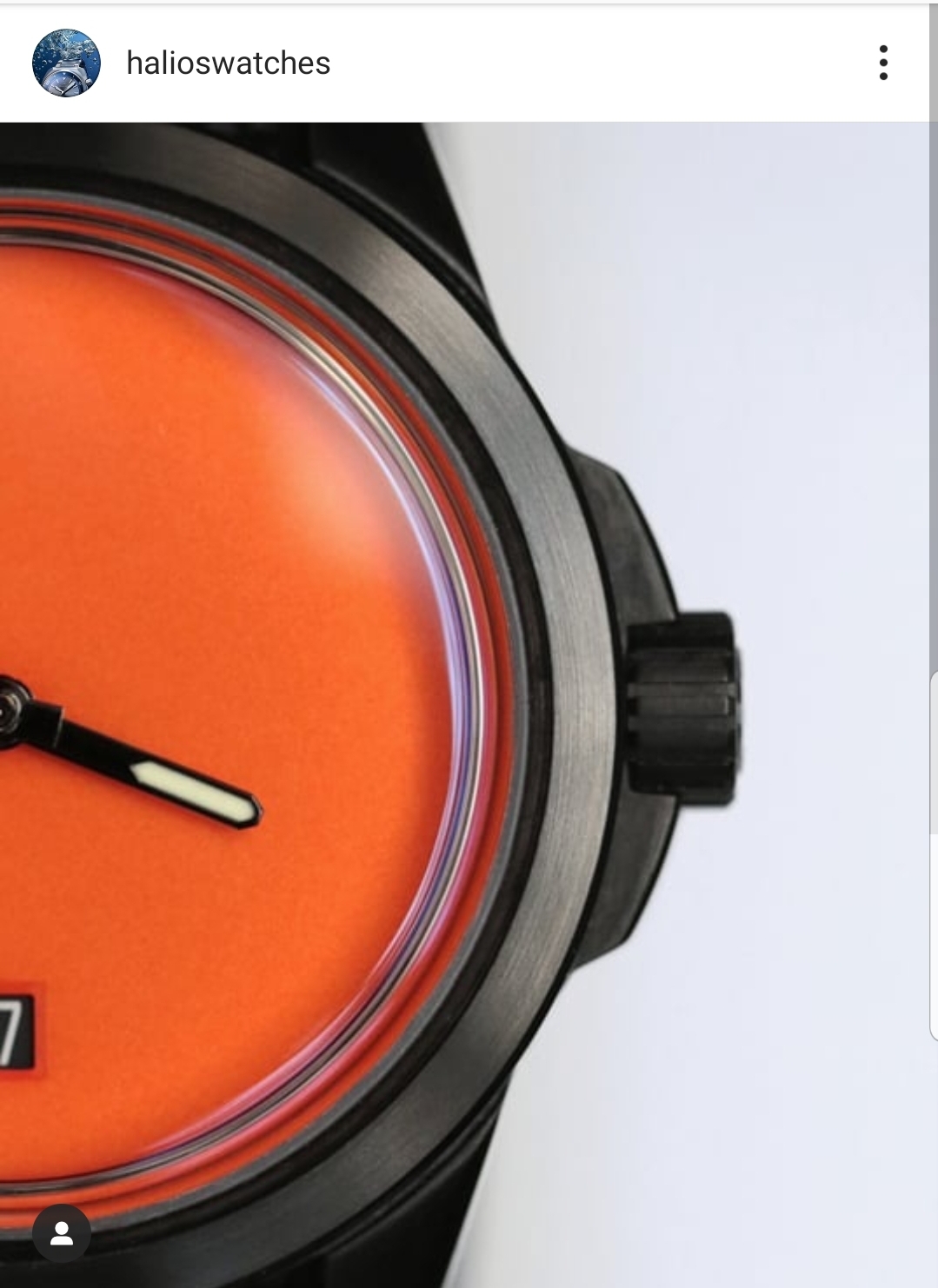 One Halios that is lesser spotted, bronze and real is the purple or fuschia dial version which did not make it for batch one. Somehow our pal @aggressivetiminghabits has got his hands on the elusive piece and was kind enough to post it with a sprinkle of halfwatchery. It looks very alluring and I’m sure it will be a hit if it ever becomes a reality. 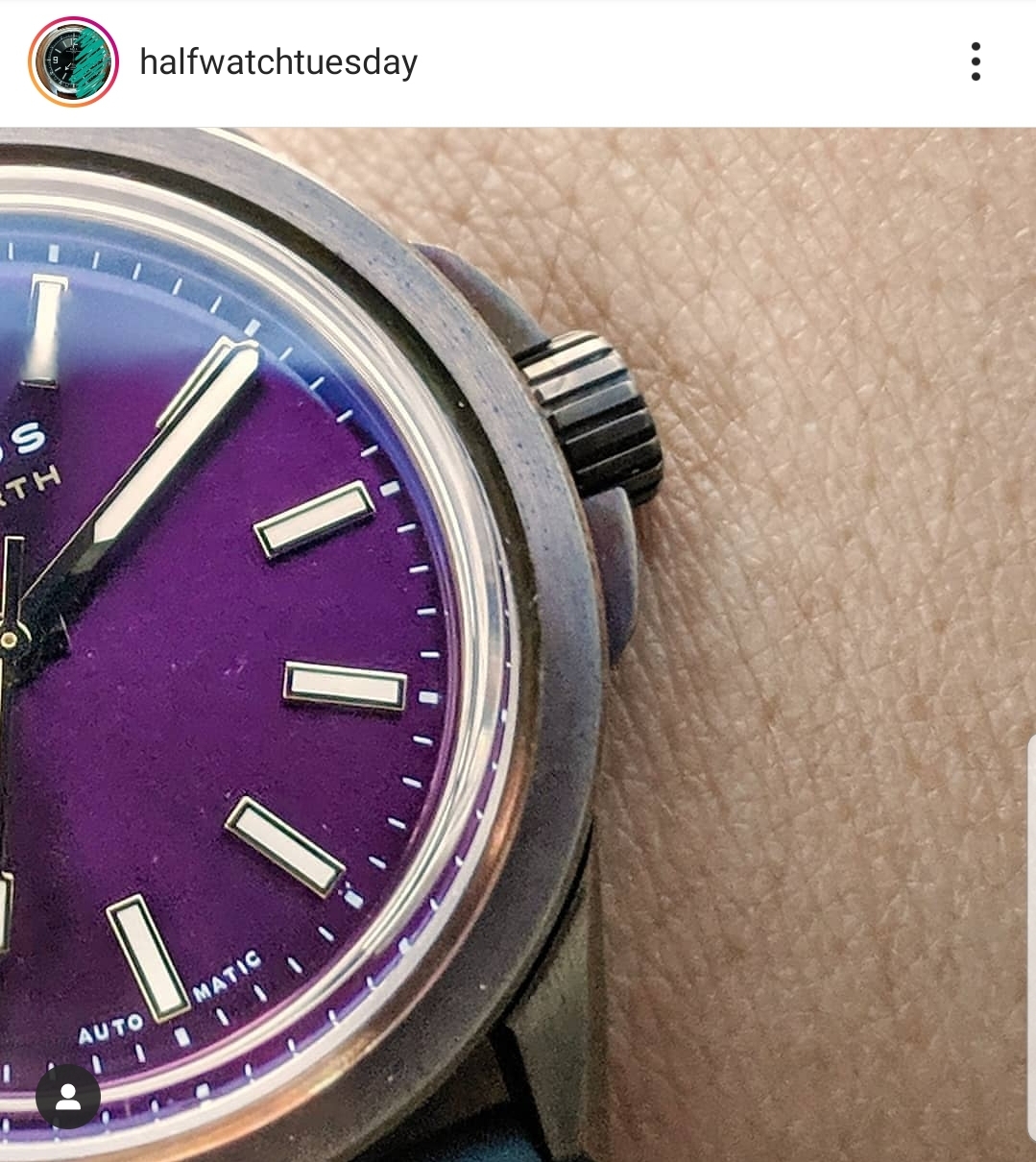 So the bottom line when it comes to microbands or whatever you choose to call them is this is definitely the time to get involved, the quality is there, the accessibility and the price point. And while the EIBs were out in full force this #halfwatchtuesday so were the traditional heavy hitters. So enough talking and lets get straight into this weeks top pics.

It being the week of the 4th July and the conquest of the woman’s USA team over the English we can only start with Halfwatch stalwart @katlenschmidt. Word on the street is we will be hearing much more from here and @a_girl_and_her_watches in an upcoming podcast…the Kat’s who got the cream…or something. 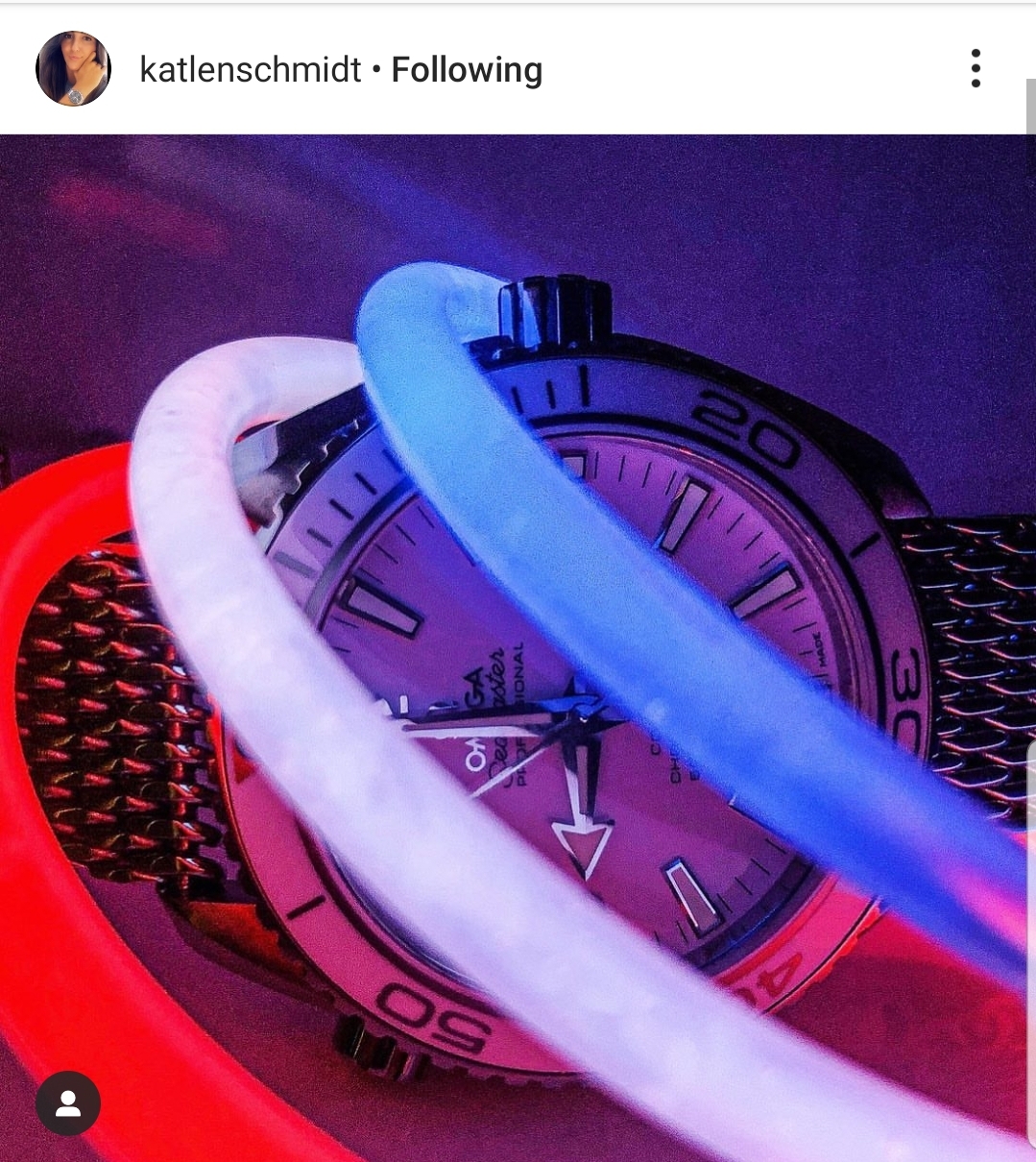 The dipshot…ever heard of it? Well you have now, creative halfwatchtuesdayers have invented a new genre of watch shot, perfect for divers. The refraction of light in the water creates a perfect mirror effect, a great example here by @wis_on_a_budget. Such a sexy Squale by the way. 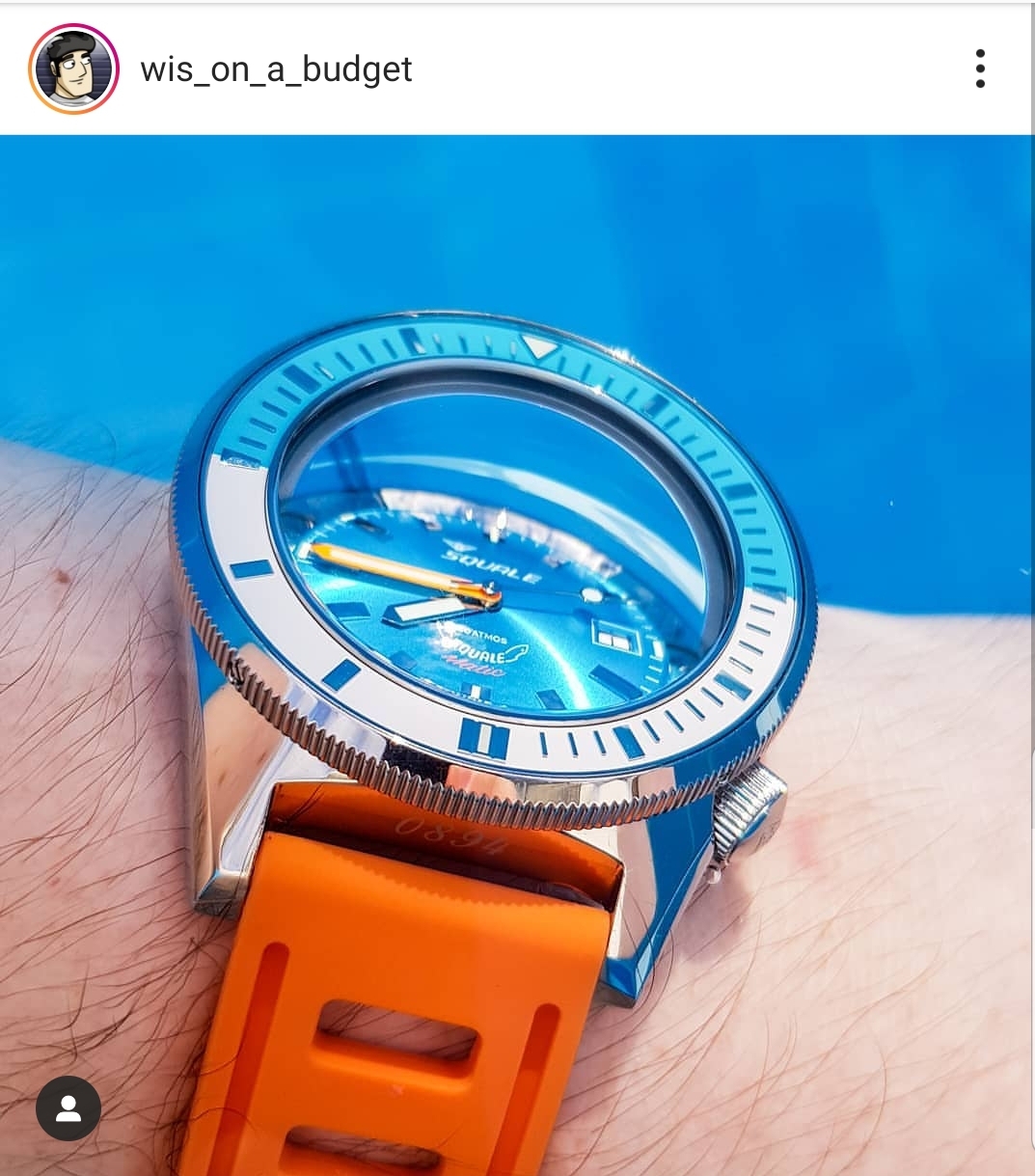 @gmtea_ treated us to some fantastic invention when he made his Longines appear to melt. 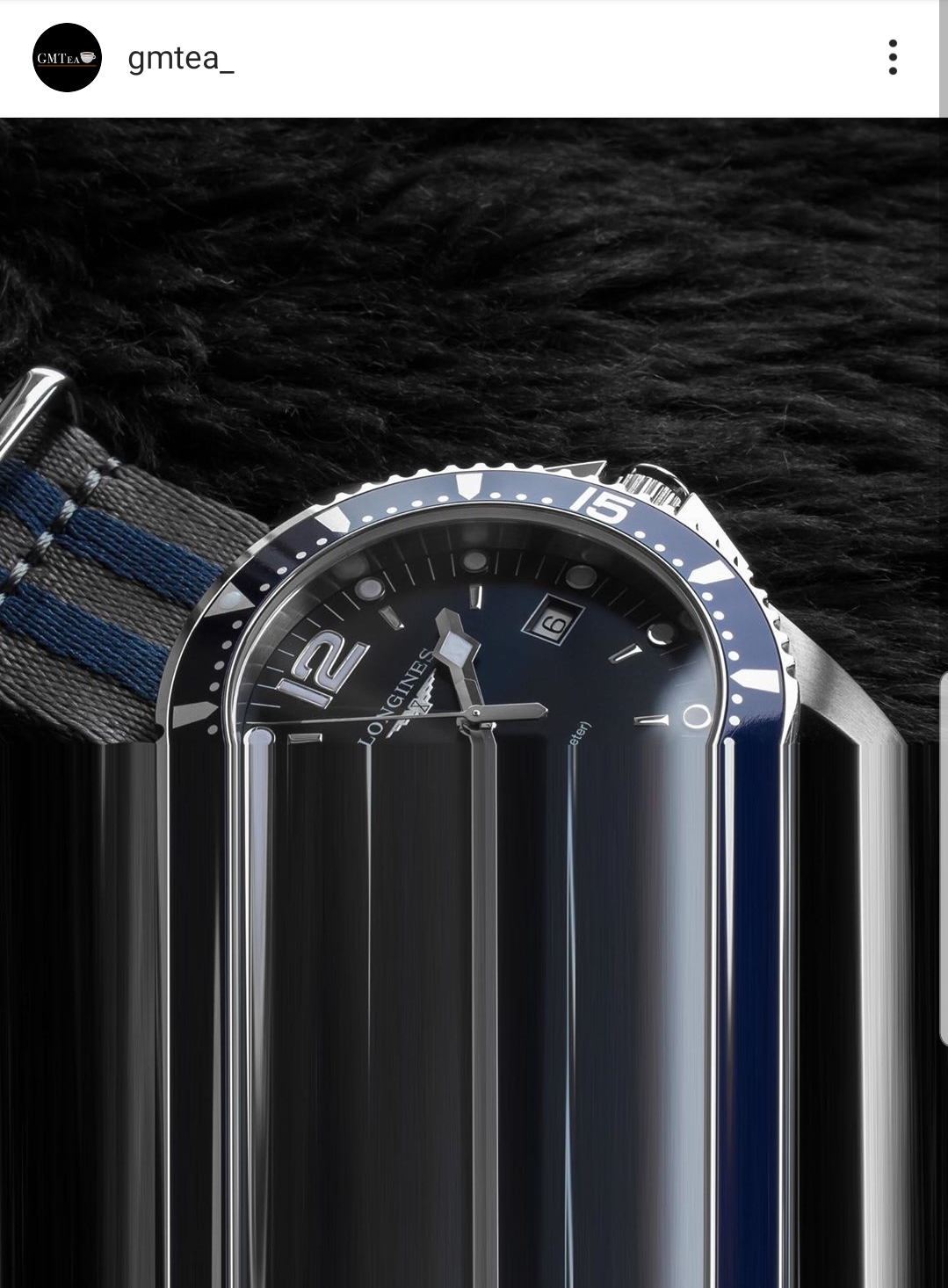 Halfwatchtuesday has become a platform to admire watches from lesser seen angles. @gordi05 did just that by not reversing in dual time Reverso. 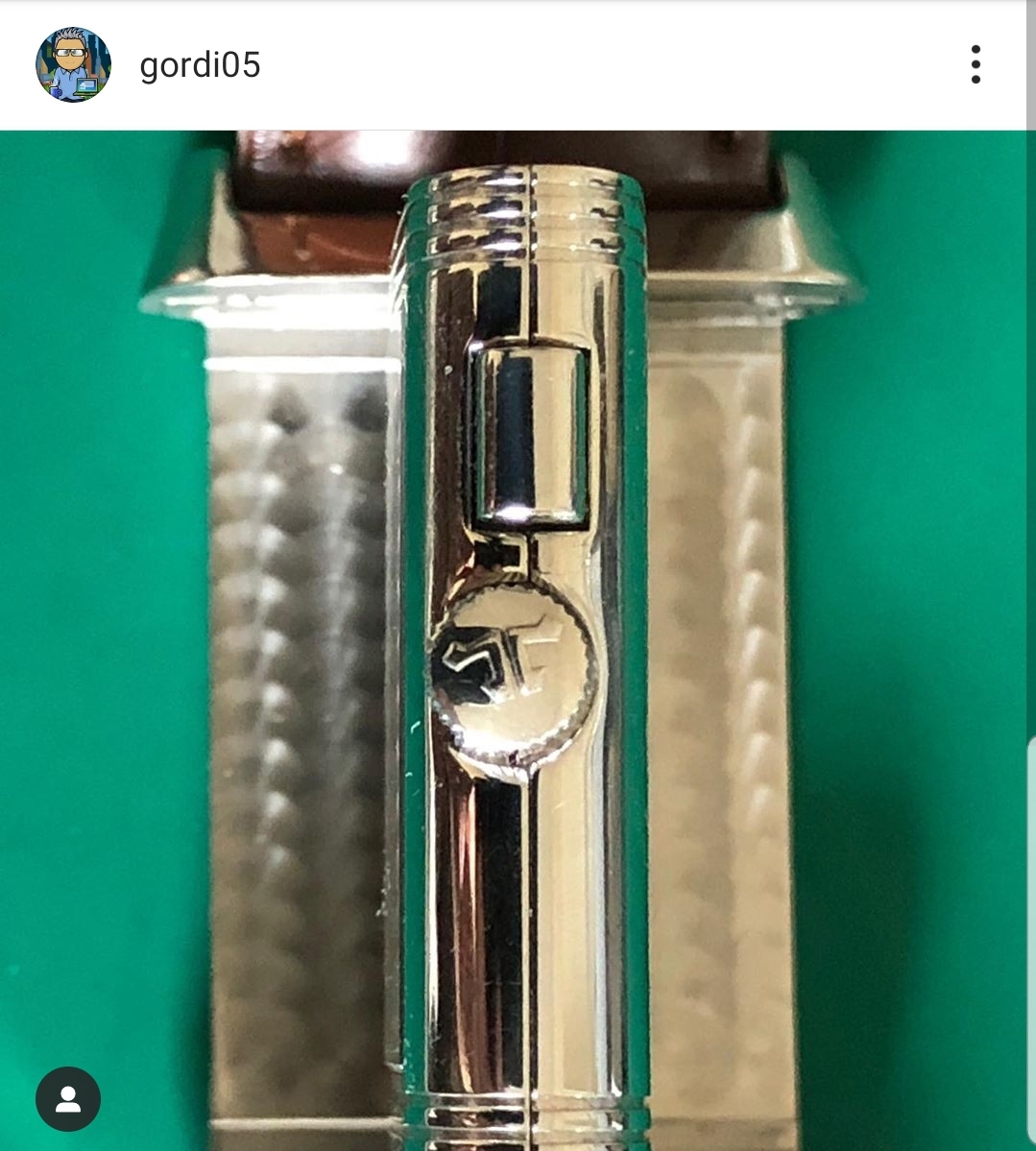 Green, that lesser used horological colour. It’s intrigued me for quite some time. I’ve been on the lookout for that perfect green dial for some time and finally put my money down for something. Had I not I would have very tempted by this luscious Moseresque dial from Undone and @mr_milgauss 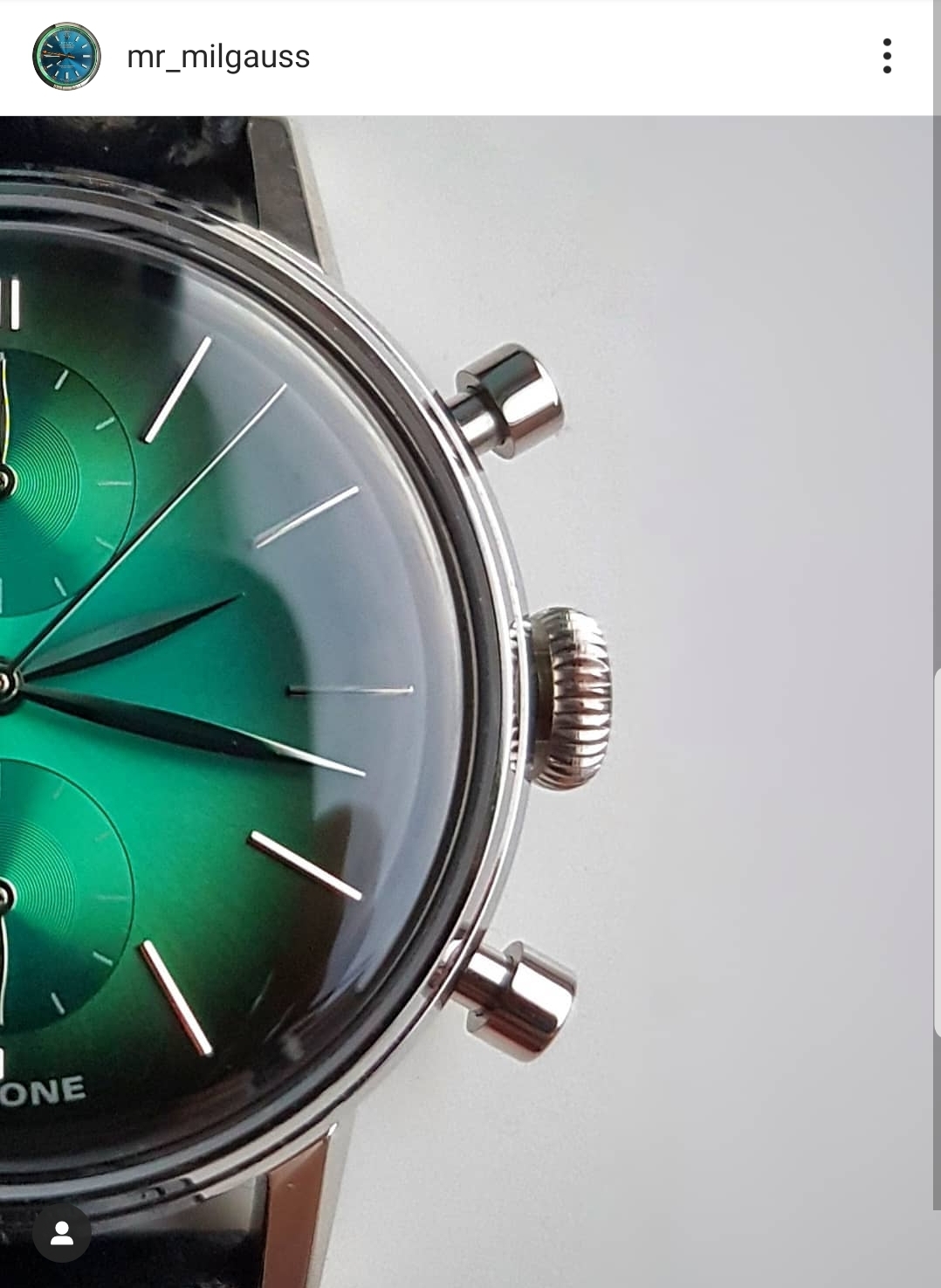 We are always on the lookout for accounts who are on the up, one which definitely fits that category is @watchbatpigeat. Check him out for amazing GMT pic, but this week he treated us to a mesmeric SKX post. Stunning work buddy. 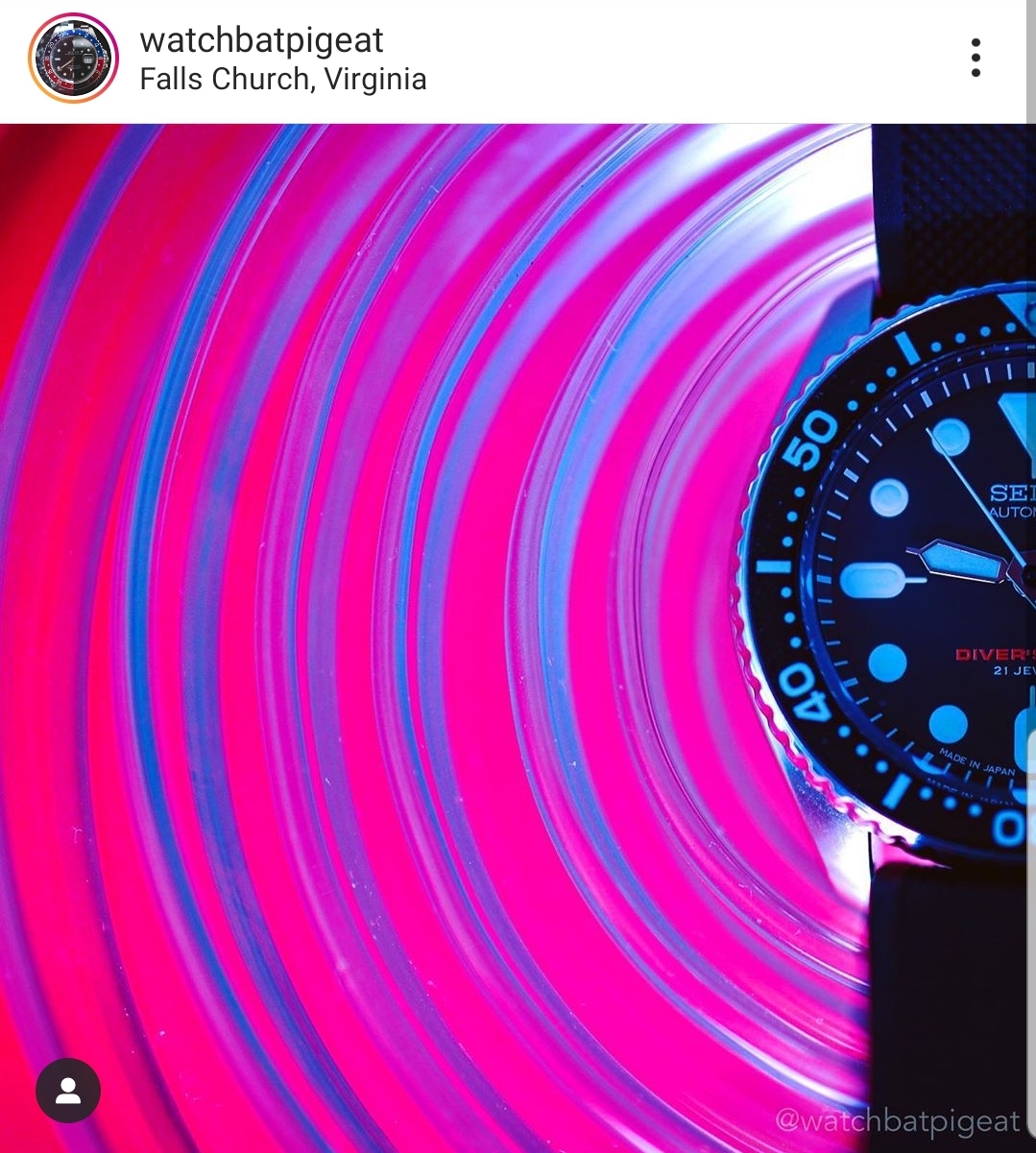 Bringing fun and colour to halfwatchtuesday was @watchfan_mnl with a Mr Jones Robot. 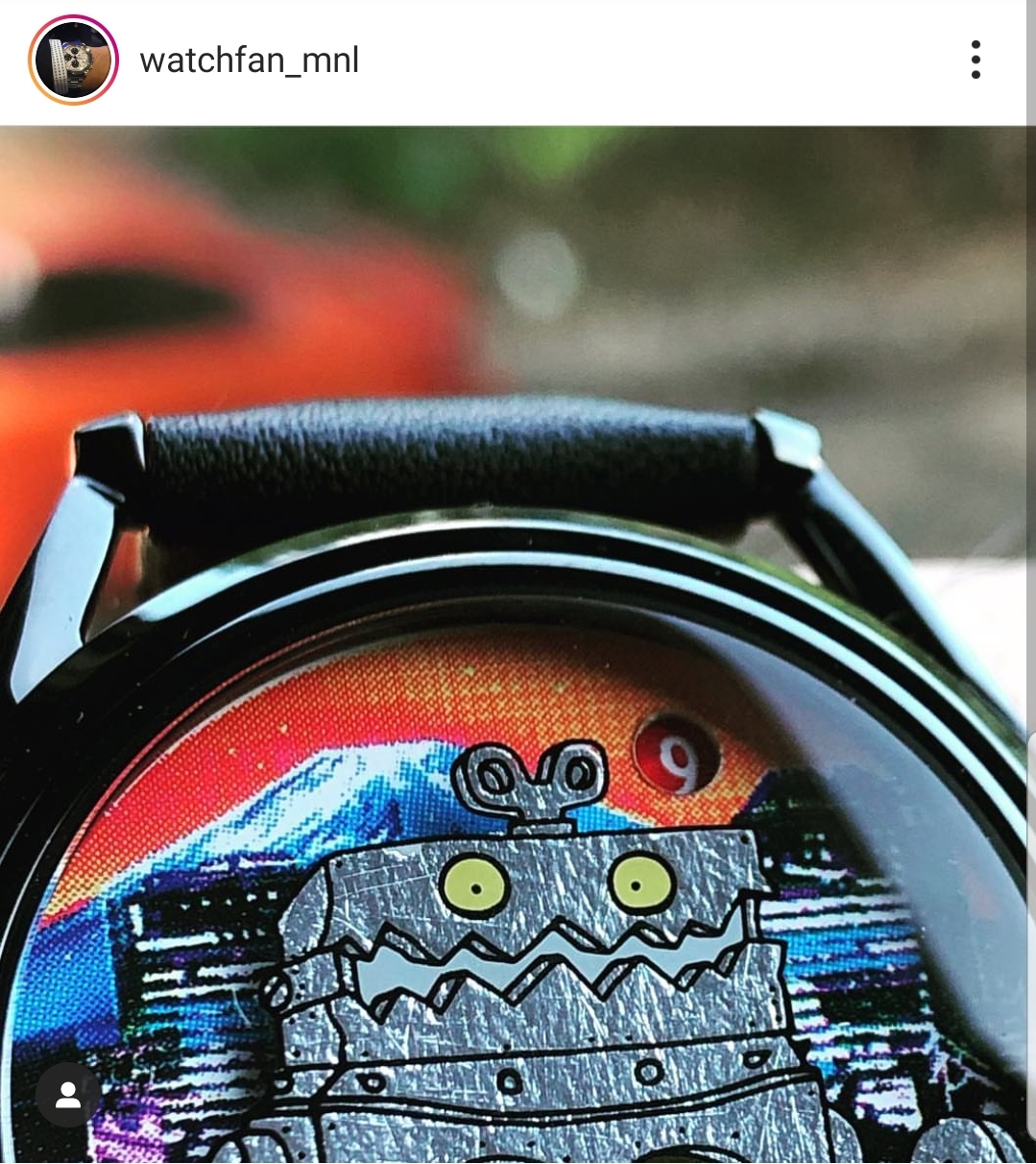 You may have seen a few illustrations creep into the top pics and this week is no different with this beauty from @the_complicated_wrist. To the naked eye it’s difficult to tell where the explorer ends and the drawing begins. 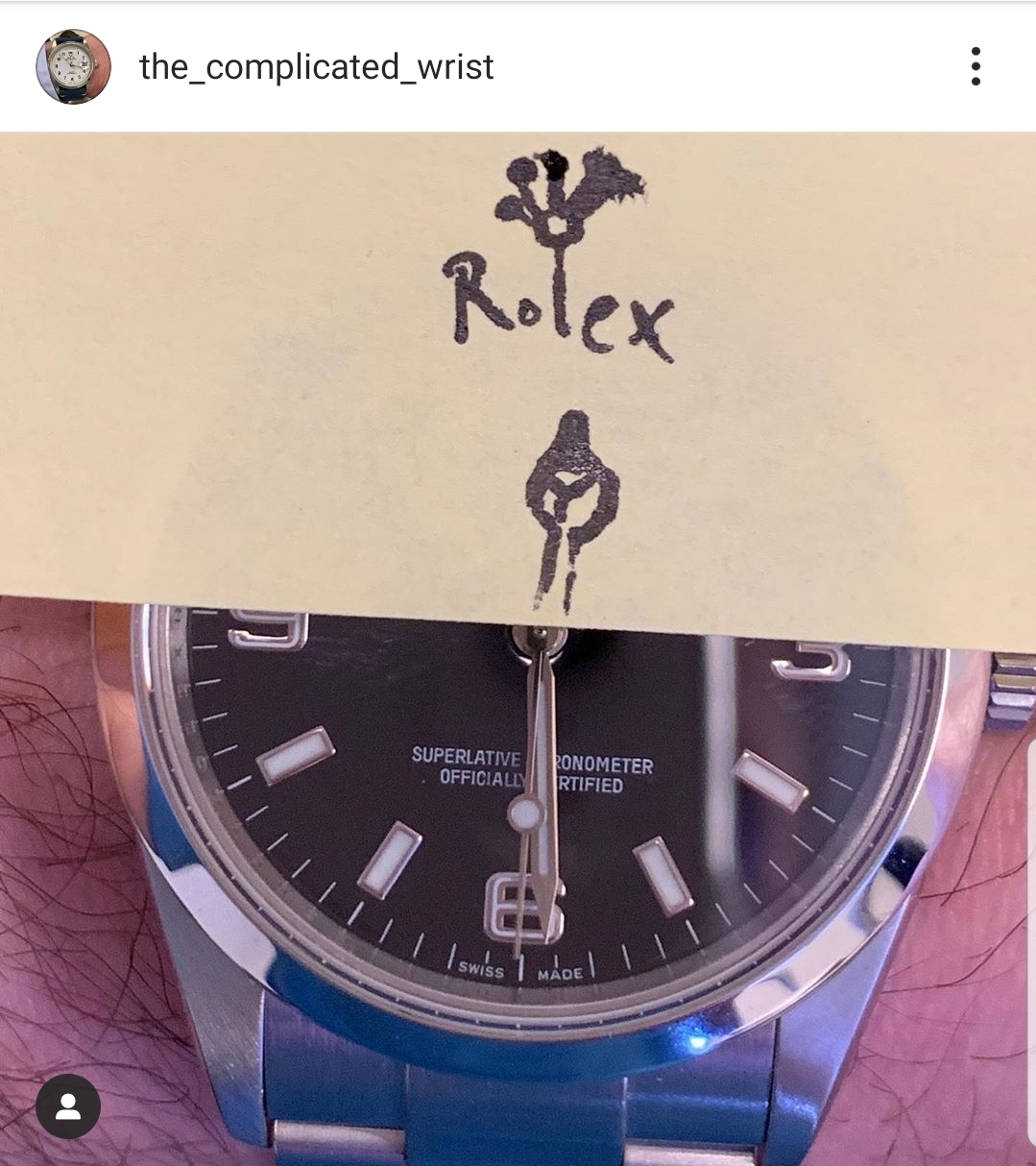 Shout out to @Tyruswatches out of Colorado their clean designs will be hitting kickstarter again later in the year. 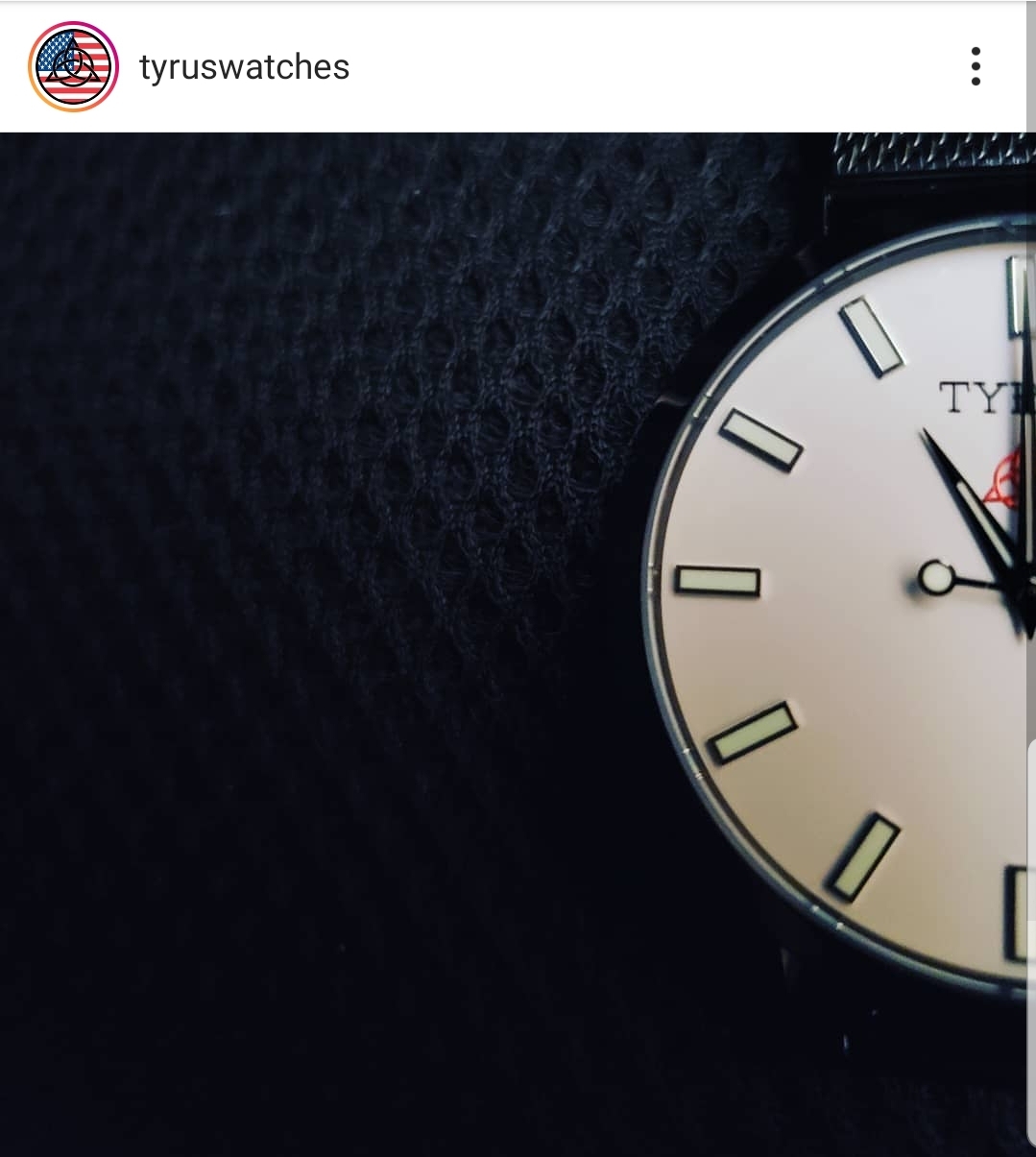 Also welcome to the halfwatch stable to British microbrand @lpwwatchco with some great military-inspired designs. 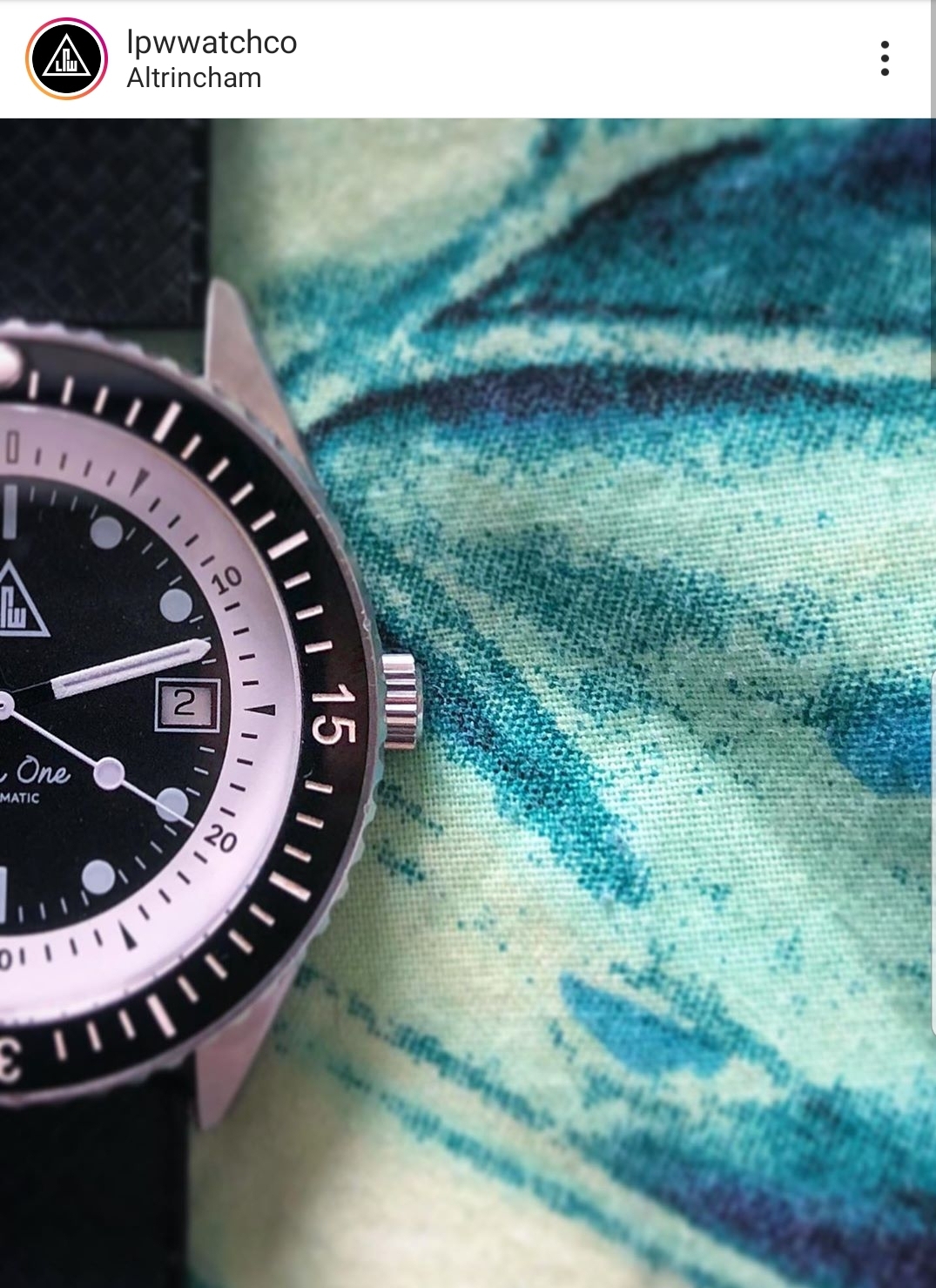 Finally, we finish with the results of our first giveaway. Thank you all who helped us celebrate getting to 1000 followers by entering the competition. Our two happy winners are @ss_mcullough and @a.cesnovar who both win a superb @barkandjack nato strap. Many thanks to Adrian @barkandjack for being a legend and teaming up with us. 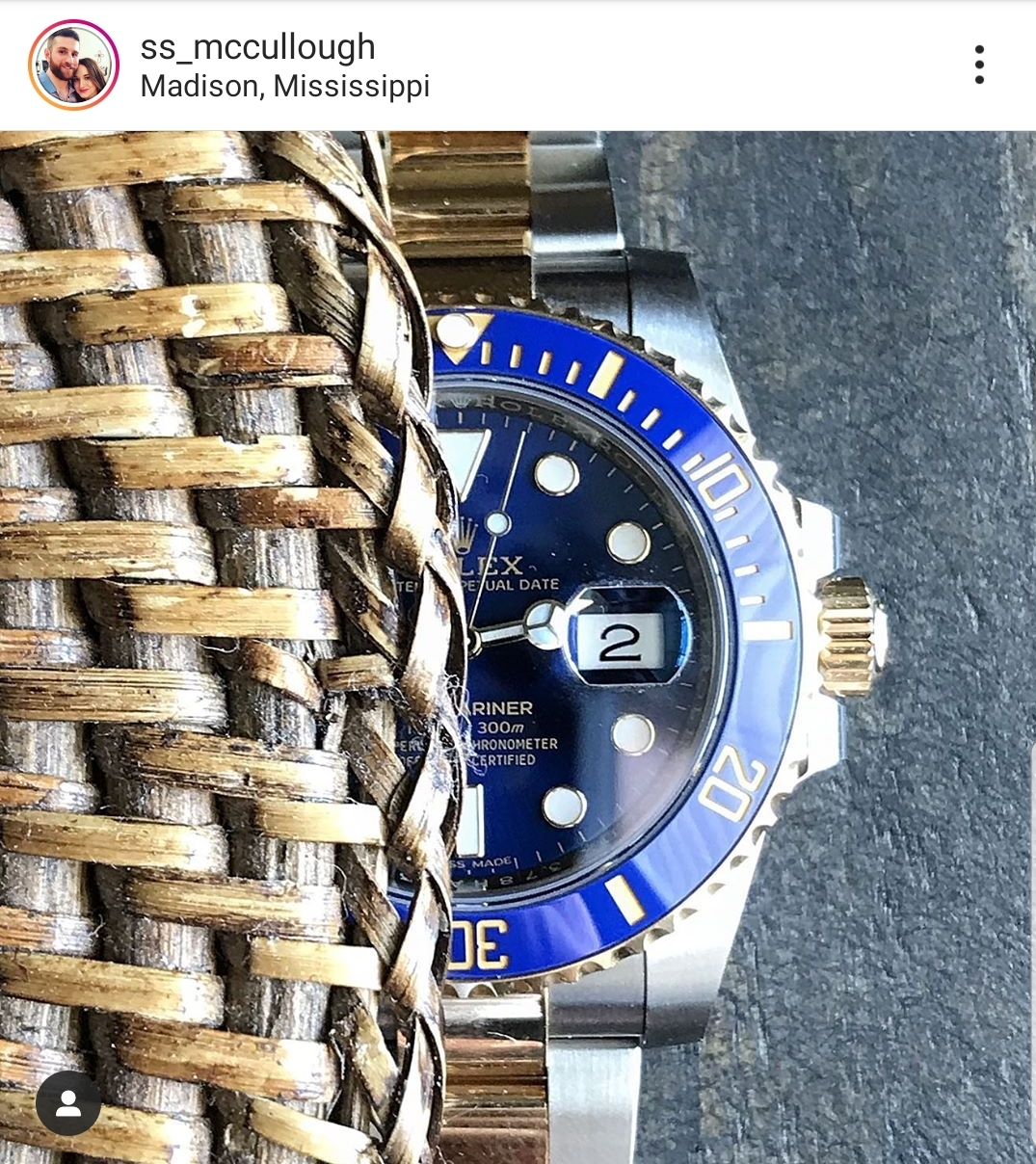 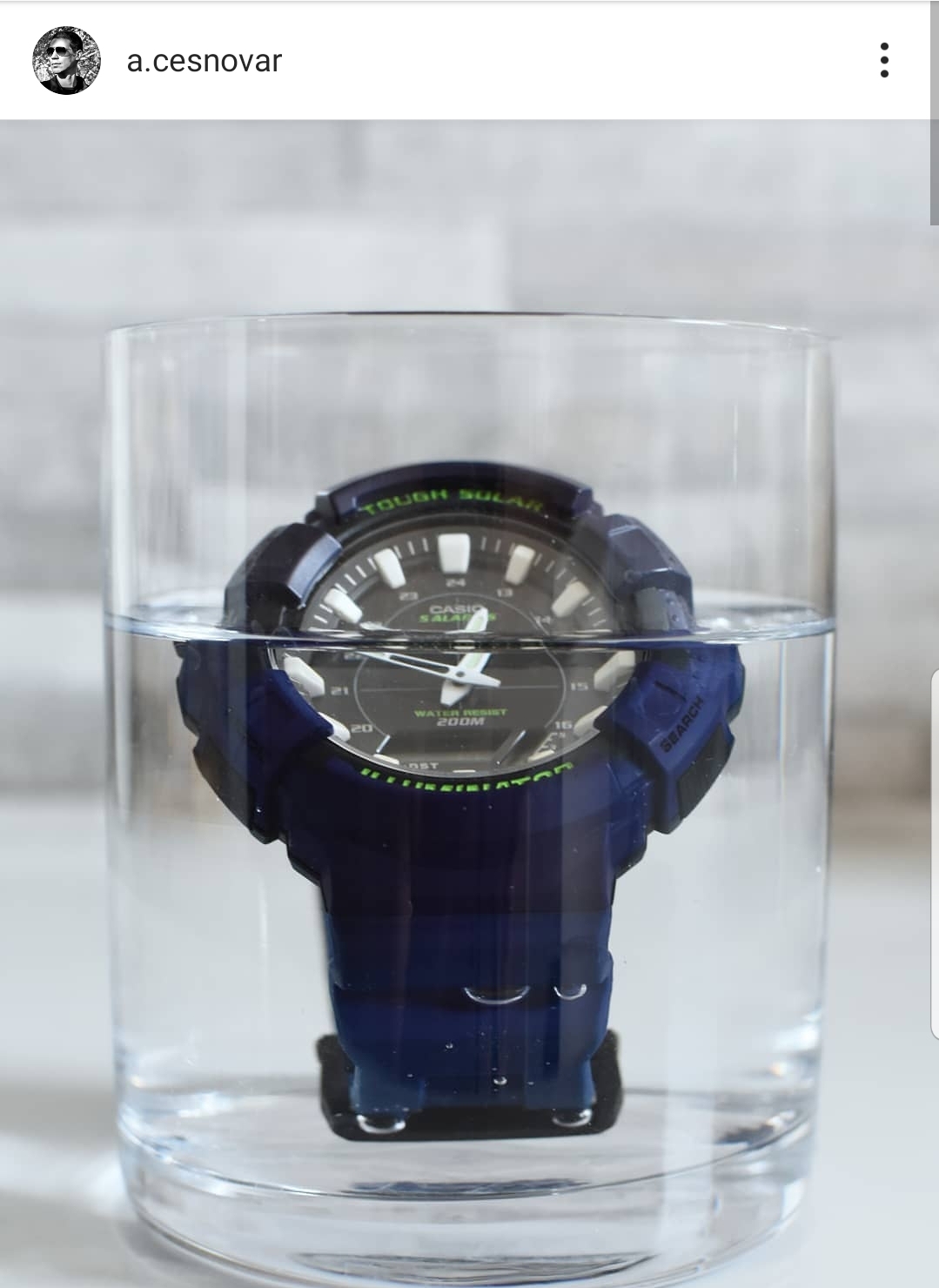 Keep an eye on the Instagram page folks new reposts go on daily and we are hoping to bring you something exciting in the next few weeks. Stay tuned and keep the halfwatches coming. #Halfwatchtuesday, it’s your day.

Ps…one last thing we heard on the grapevine that @rjbroer of Fratello watches now says speedytuesday is every day, just like halfwatchtuesday has always been. We love it when hashtags come together. RJ we would love to collaborate.