Even to someone who doesn’t collect or know a great deal about timepieces, one brand not only transcends this divide but is synonymous with anything to do with luxury – Rolex 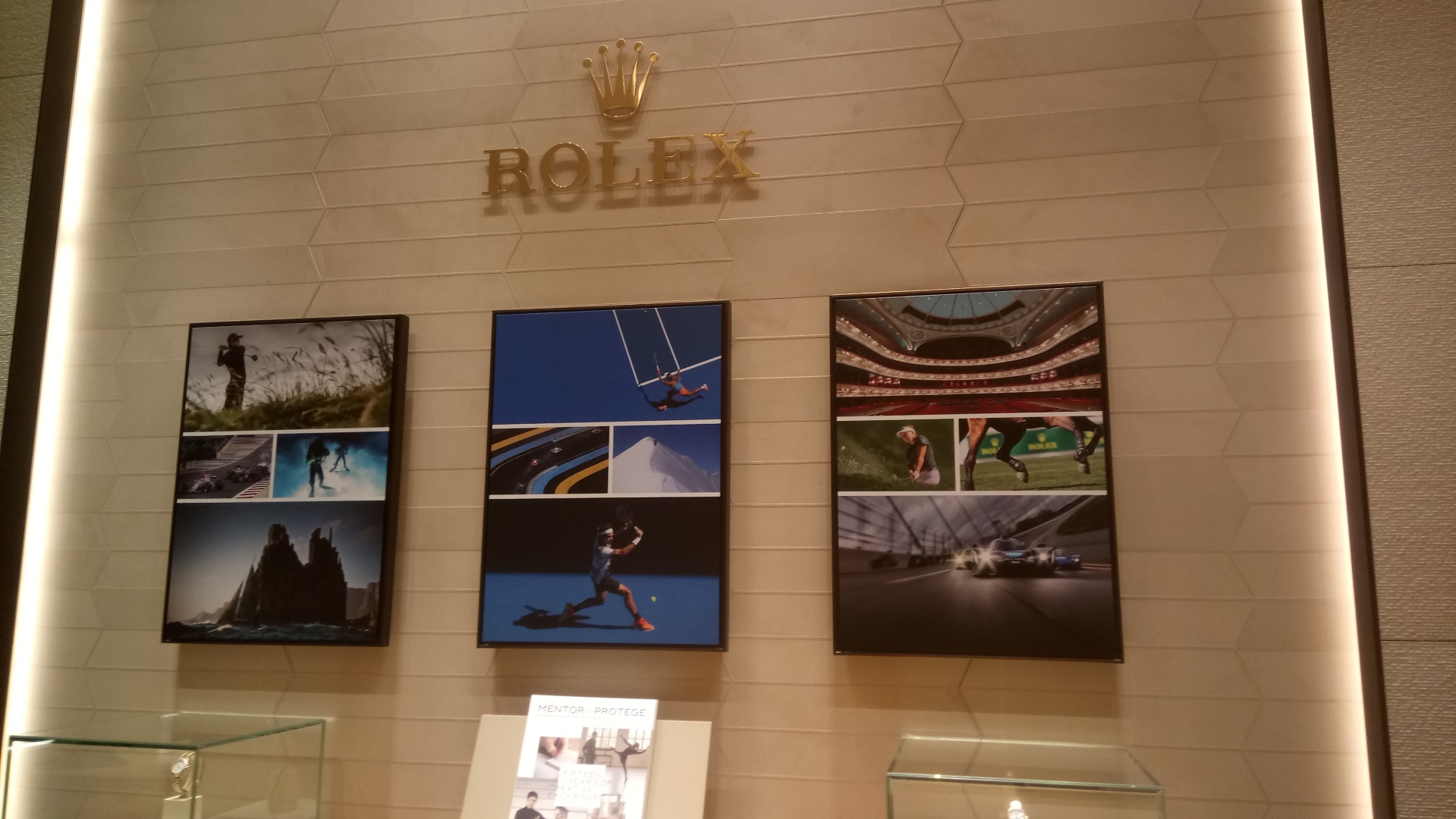 Even as a wee lad, Rolex was one of those brands that you saw on the silver screen linked with Movie stars and anyone in that echelon. A perfect example of this was Sean Connery’s James Bond, in his element with his white tuxedo, armed with his Walther PPK and a Rolex.

Rolex was a brand I respected but never thought I would be an option until I started to look into collecting more seriously. There were three things that prevented me in considering them as an option to add to the collection.
– Price and availability of their sports models
– The design seemed a bit too conservative
– I don’t like Cyclops date windows 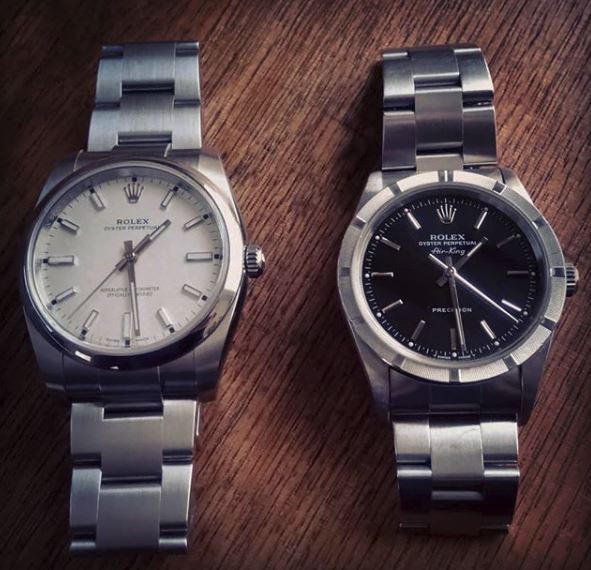 But as time went on, the more I went down the rabbit hole, the more I found out about other models, other price points …. So my opinions and tastes were changing.
(Except for Cyclops windows – that hasn’t)

About a year or so into collecting, I had started looking more into the brand and there were 3 models I liked across vintage and current eras. The Air-King, the Explorer 1 and the Oyster Perpetual.

The Explorer 1 was nice, but finding one was becoming tricky and I didn’t want to pay for Import tax from overseas so I was left searching for sellers and stores here in Australia, which meant Explorers of a price range I was happy to pay, were very scarce.

The Oyster Perpetual was a contender, but the availability of these was not as bad as the Explorer but found myself ‘perpetually’ missing out on the stock. Also, the dials they did have at the time were not great. Blue with lime green hour dots – Thanks but no thanks. 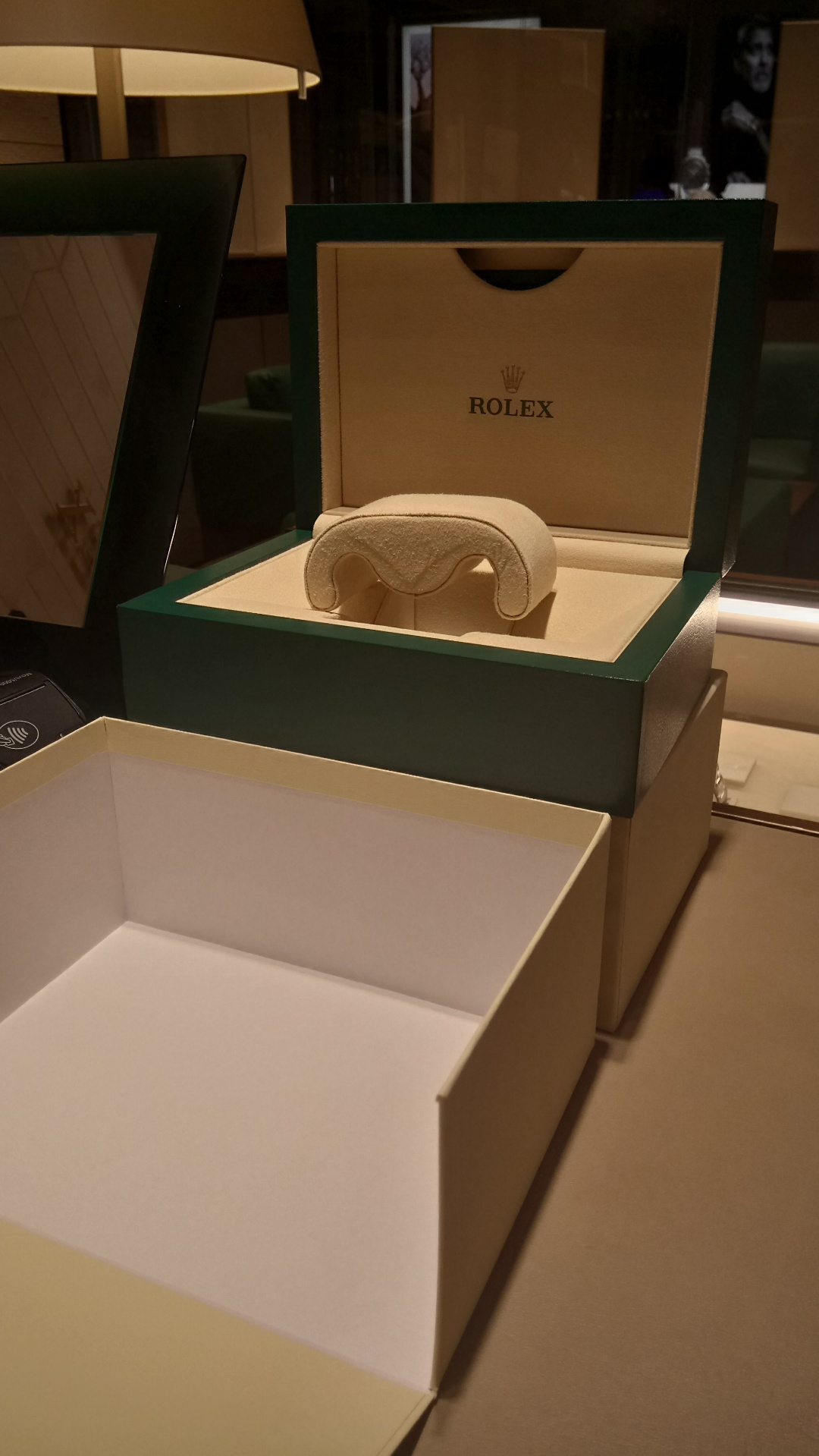 This left the Air King, not the current model but the previous vintage style version.
There were quite a few online, but they were either much more than I wanted to pay or the condition was less than desirable.

But I kept at it and eventually found a fantastic example with a black dial, engine turned bezel with box and papers. (Even managed to negotiate the price down a bit too) My local watchmaker gave it the once over and gave it a big thumbs up… and it was great, it still is and I still love it…

I was catching up with friends at the Penny Arcade gaming festival in Melbourne that weekend.
As I was walking past the Crown casino shopping complex and completely forgot that it contained quite a few boutiques. I still had plenty of time before the event, so sure why not pop in.

Browsing through there were a few nice timepieces here and there, but nothing jumping out.
Then I remembered there was a Rolex boutique in the main Palladium Foyer entrance.
‘Oh why not’ I thought – maybe they had a few I could try on… just for a bit of fun.

The moment the front door was opened I was welcomed with such a warm and friendly greeting it surprised me, to begin with. I was half expecting something friendly but nothing more than a polite hello.

They asked me if I was looking for something in particular and I responded with an
‘uhhh to be honest, I don’t know… I have tried on a few sports models but they feel too big and cumbersome’ after this less than confident response I was still expecting them to show me out the door OR push a sale for those larger sports models, but I was very much mistaken.

The sales rep – Tim – replied ‘oh not too worry, we have quite a few 34 and 36mm watches in stock, if you have a moment we could try some on and see if something does suit your taste and size’. He offered me a coffee and a seat (both were appreciated) he soon returned to my surprise with 3 models, a Date Just 36, and Oyster Perpetual 36 and 34.

I took off my Air King to try out the Date Just (I already knew it wasn’t my taste due to that Cyclops window) But I didn’t want to be rude – This one was in a Brilliant Blue with a Fluted white gold bezel. It looked amazing. But still that magnifying window over the date I know would bug me.

I took it off, but only then noticed that Tim was staring at my Air King… He asked ‘May I?’ – I replied with a smile, “yes of course’ – He picked it up and inspected it closely. He then mentioned that he wasn’t a fan of the newer Air Kings, but that this Black Dial version with the Engine turned bezel and white gold markers was something he loved and was looking for himself.

I tried on the 36 OP first in Black, it was nice, but looked very similar to the Air King, so the next and last one was the 34 OP in white. 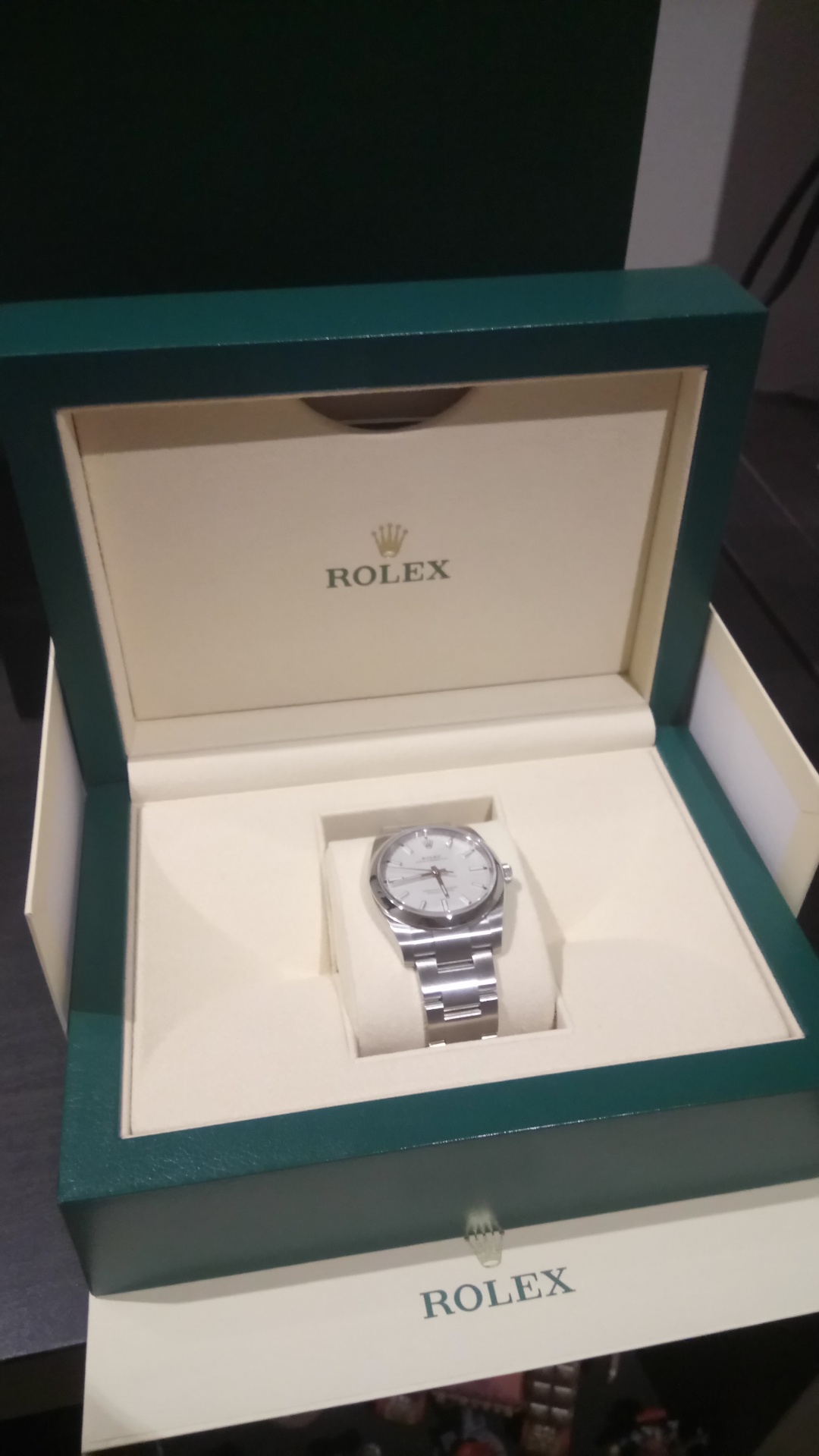 Well if there was ever a goldilocks moment, this was it. 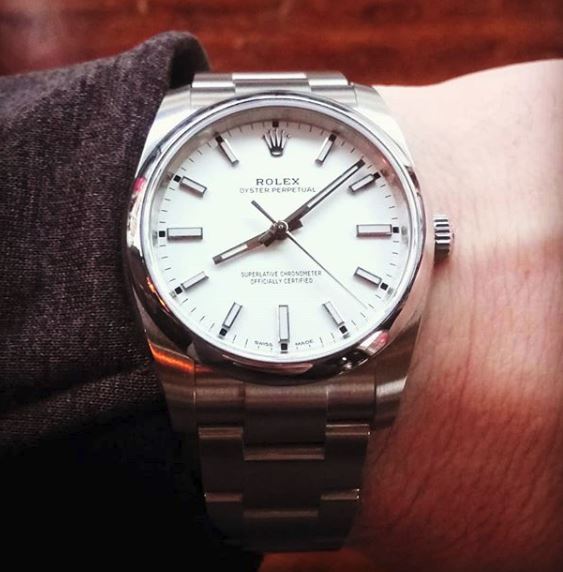 That satin white dial, white gold hands and hour markers.
The proportions of this for me was absolutely banged on. Even Tim mentioned that he thought the 34 was a perfect fit compared to the 36.

He asked me if I was looking to buy in the near future or was planning to save up. I replied stating that I just bought the Air King not too long ago as well as a Tudor – But I did want to treat this as my saving goal. Something to aim for in 6 months or so. My only concern was availability – knowing that the other AD’s struggled with stock.

Tim replied ‘Not to worry, we do get these on and off semi-regularly. I’ll take your details and you name a date when you think you are ready, If you are happy with it and I’ll give you a call to see how you are going and we can go from there’ – I passed on my details and mentioned that May would be a good time to call back.

I remember later that day kicking myself for not taking a photo with it on, but only a few weeks later Adrian from Bark & Jack did a YouTube review of the exact same Rolex – so I had not only a reference point but a lot of information and perspective which just reinforced my choice.

Fast forward to the end of May and to his word Tim called me and wanted to check on how I was going. I replied that I had just sold a few things on EBay and was just waiting for PayPal to clear and I would reach my target.

He responded: ‘We just had received another white 34 OP and wanted to know if you would like me could put it aside for you?’ I was so chuffed that he was not only spot on with his call-back but that he had noted down the exact model, colour and size I was after back in November.
I replied that I would be most grateful and I’d let him know as soon as funds had cleared. 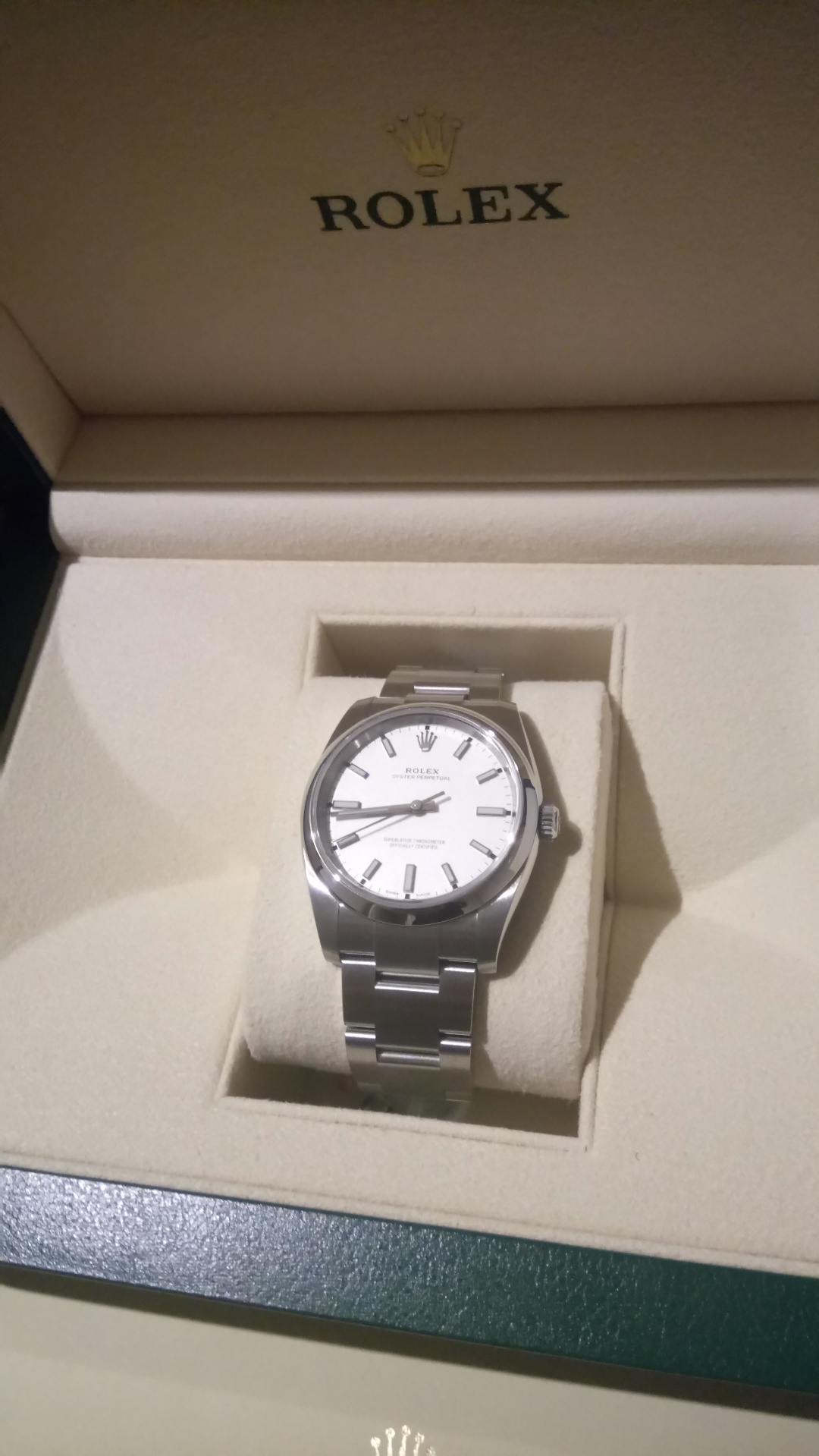 Well within an hour of that phone call my Bank App just confirmed that my PayPal funds had landed, so I called Tim back right away and said I’d be in there right after work.
(Another great thing about the AD being in the Casino is that they were open til 9pm)

I think I was nearly floating along the ground on my way after work, I remember being greeted at the door and there was Tim with a beaming smile and firm handshake.
‘Well Adam, today is the day – You ready to try on your brand new Rolex?’ – I don’t think I said anything other than ‘Oh my yes’ whilst rubbing my hands together looking like Homer Simpson in the land of chocolate.

Tim ushered me to a seat and being a Thursday afternoon I was the only one in the boutique. It was a very relaxing atmosphere, the smell of Leather and Mahogany in the air. Then seeing that big green box with the satin white Oyster Perpetual – it was as stunning as ever.

I started to fill in all my details for the warranty. I handed it back to Tim so they could print out by details on the card. He looked up and down the form to make sure I didn’t miss anything – and then he stopped – looked at the Calender and then back at the form.

‘Oh … is your birthday tomorrow?’ – I replied it was and chuckled that it was an unintentional birthday gift … He just responded with ‘Just a moment Adam, I’ll be right back’
I thought he must have forgotten some other form or item for me to fill out, but to my surprise he came back with a Bottle of Champagne AND a casino gift card worth 5% of my purchase.

Tim just said ‘We can’t have you leave here on your birthday and not having something to celebrate with so from us at Rolex, we hope this makes for a special birthday’

I was glad I was still sitting down, it was already special enough that I was getting the watch, but to add this on top was just amazing, and then that’s when it dawned on me.

It wasn’t just the fact that I wanted to save up for a Rolex, but it was the Boutique experience that goes with buying an item like this brand new. Even when I popped in to try a few things on all those months ago and every time I spoke to them on the phone or in person, I was always treated very well and never once felt rushed on a choice or pushed into a sale like some of the other stores.

So after a warm handshake, wishing me Happy Birthday again – I walked back to the station with Watch, Champers and Gift card all wrapped up.

I was just expecting to just walk away with just an amazing watch, but it ended up being a retail experience that I will regard as just as amazing as the Rolex itself.