I met my wife on the internet, I joke that I was looking for a light bulb, I was actually looking for her. As you might have guessed by my name and emoji replies, I am a person of colour; I call it brown.

Now with being brown comes other wonderful things like belonging to two cultures. My particular culture would be known to cast a raised eyebrow upon the chitchatting of opposite sexes for the purposes of fun and getting to know one another. We couldn’t be bothered with that bollocks so we took matters in our own hands and owned our situation. “So” a distant Auntie would exclaim ‘how did the two of you meet’… “On the internet Auntie”, there then usually followed a slight stagger in the lady’s gait as she stumbled away from us muttering something in Punjabi under her voice.

In a way we missed an opportunity to have some fun and come up with some likely modes of introduction, ‘our brothers played judo together’, ‘our mothers met on a charity skydive’, ‘she saw me resuscitate a goldfish’. Nope, we met on the internet and we’re sticking to it, and in time others did the same, however, now the mild disparagement that was cast upon us has turned into congratulatory tones.

And so, life took a dramatic twist and we couldn’t be happier. The worldwide web, cast its net and brought us together and therefore it’s use in this matter has been expunged. This was all just pre-tinder so I must admit to being a bit ignorant about the mechanics of that particular app. However, my understanding is that you can swipe left or right depending on how much you like who you see, so @rikkiwatches fresh from completing Scottish tinder will inevitably have had his face swiped right more times than its feasible to mention, whilst @rickticktalk may be more prone to a swipe left unless you have a penchant for Lambo tractors.

(editors note: to save me having to deal with Rikki’s complaints on this post again, here is his entry, Rikki consider it your prize for completing Scottish Tinder) 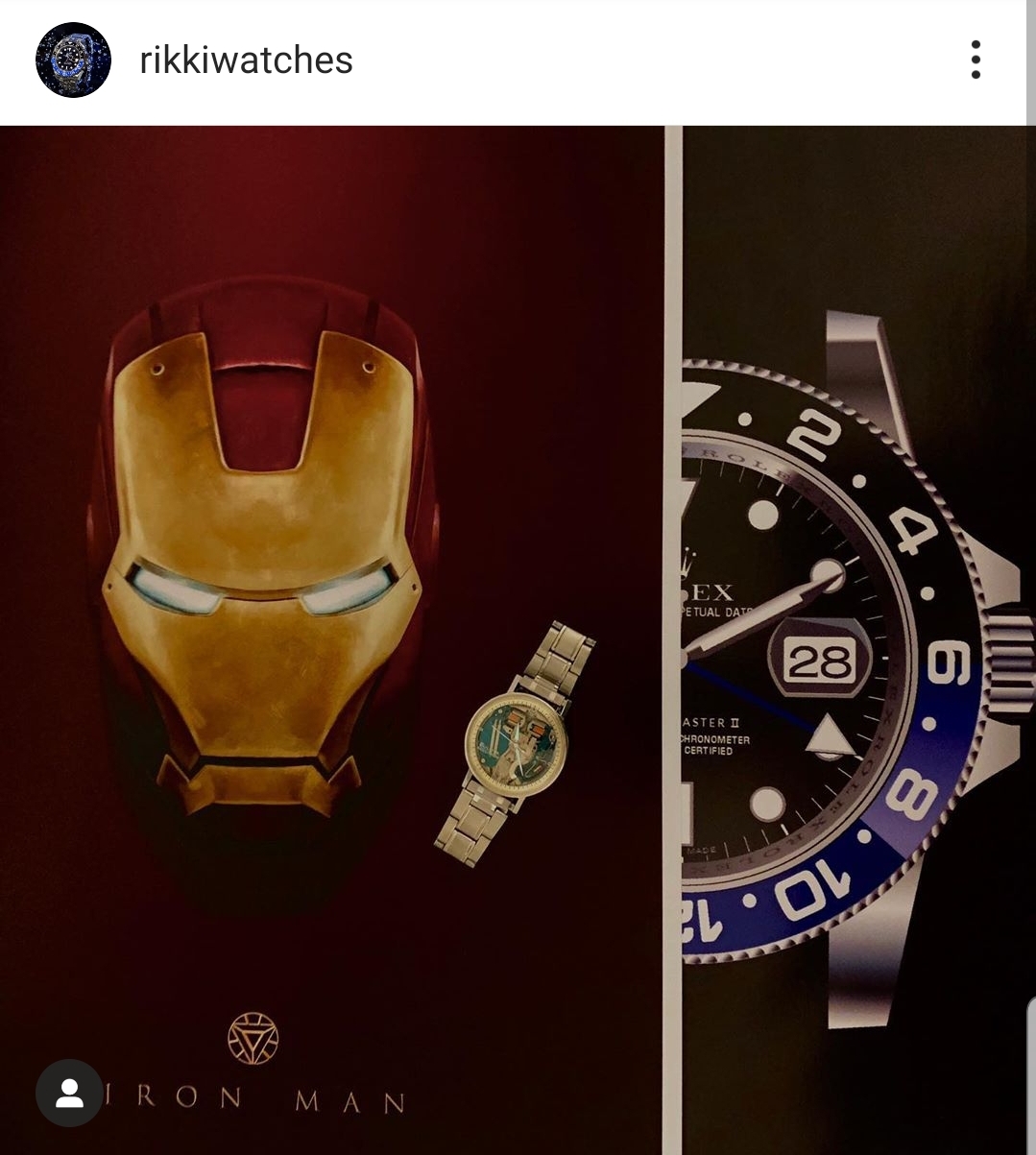 This week’s Half-watch Tuesday also became a bit of a swiping affair with a number of swipe-able posts which showed of the watches to their true magnificence. I have to be honest, I have only become aware of such a style since the inception of #HalfwatchTuesday and must admit they are as beautiful as they are clever, even using one to show my newest addition, the quite fantastic Nodus Contrail (you will hear more about that down the line I’m sure). The swipe-able post is just one way in which our amazing gang of posters have been able to express their creativity, so without further ado, lets jump straight into this weeks HWT top pics. 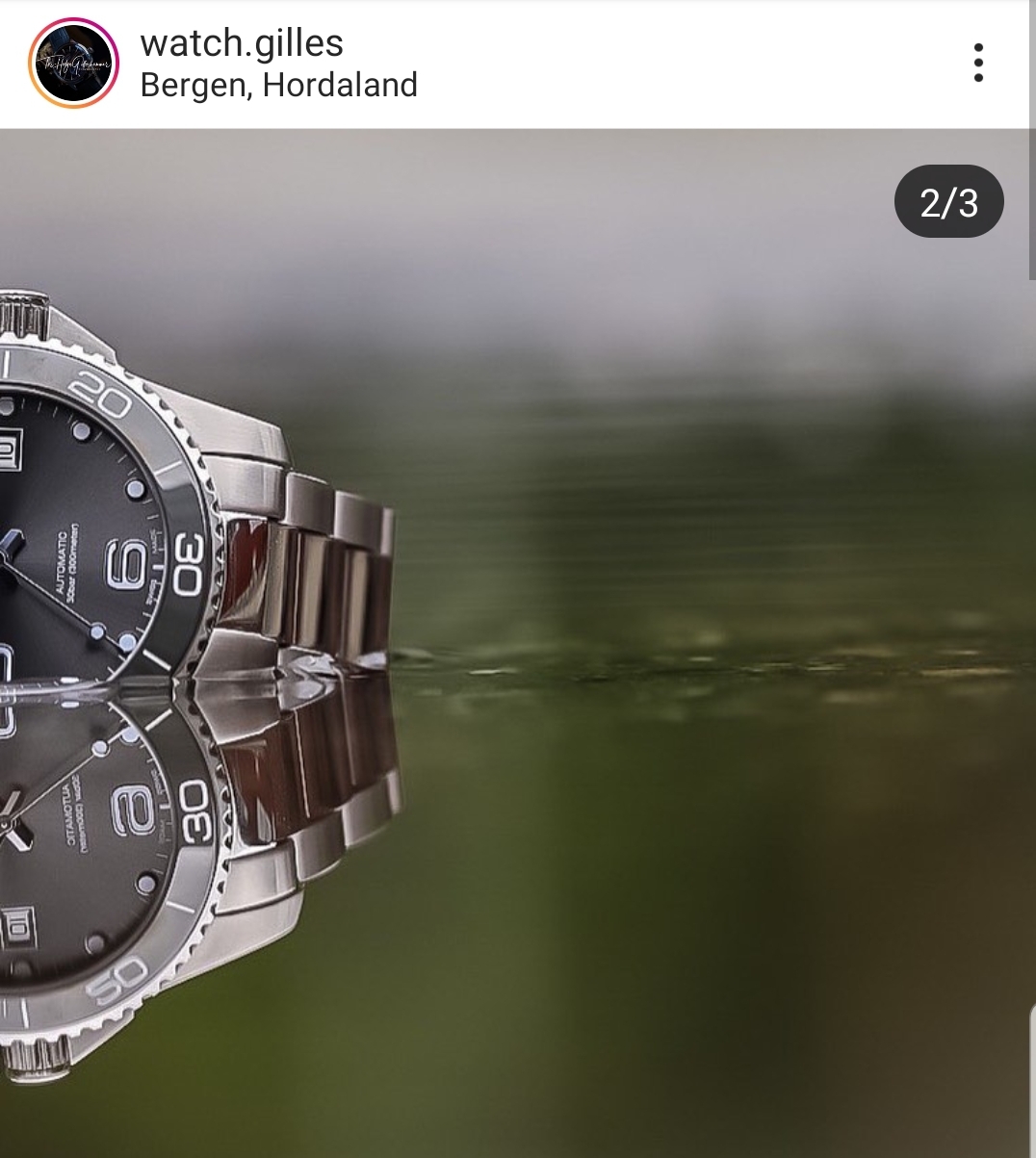 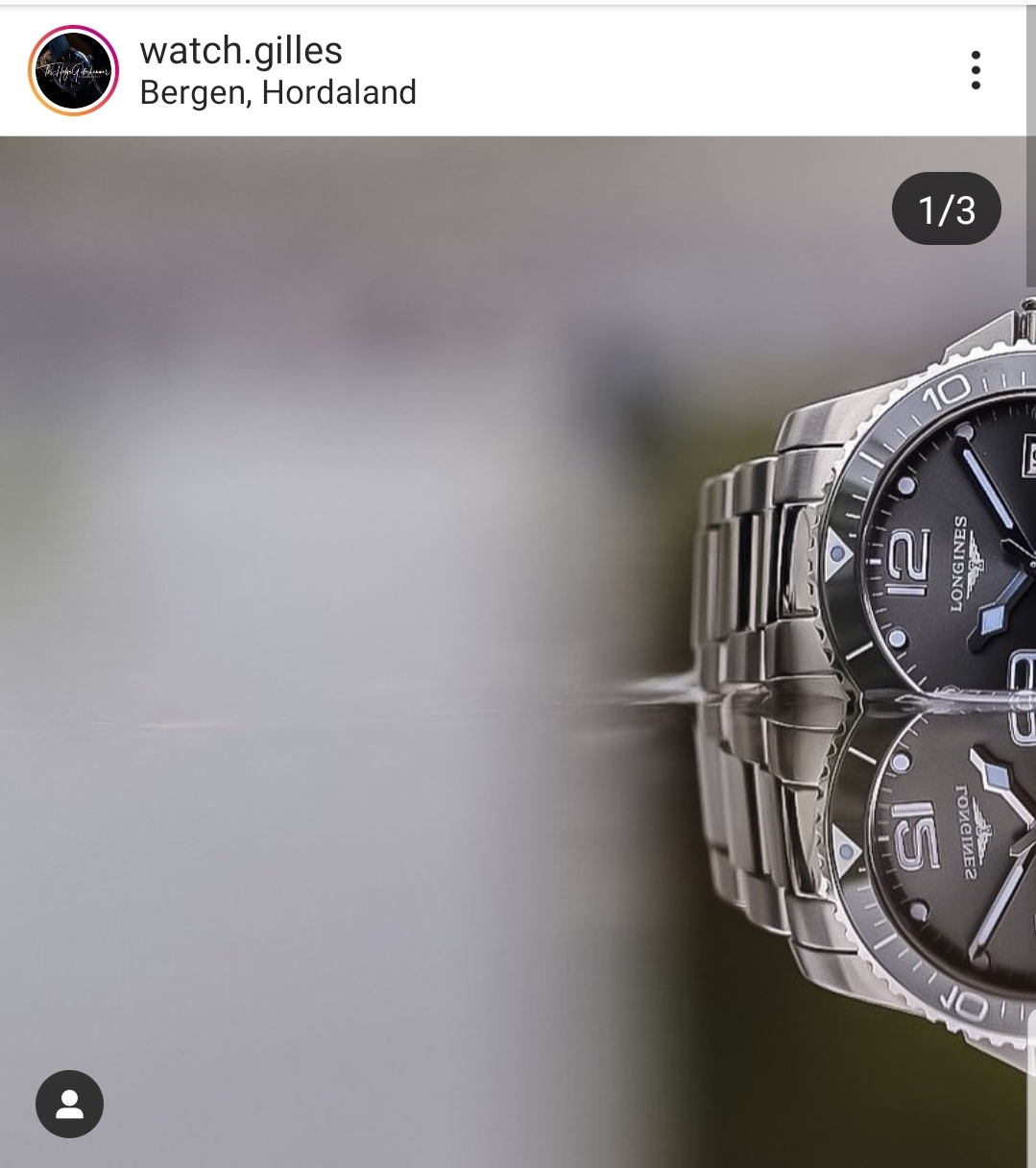 @watch.gilles has mastered the swipe-able post. Having just missed out on top pics with last week’s effort he has stormed into the reckoning with a stunningly crisp image of his Longines Hydroconquest Ceramic, I had to look about three times to work it out and it looked better every time; I don’t think I’ve ever seen such a clear reflection. 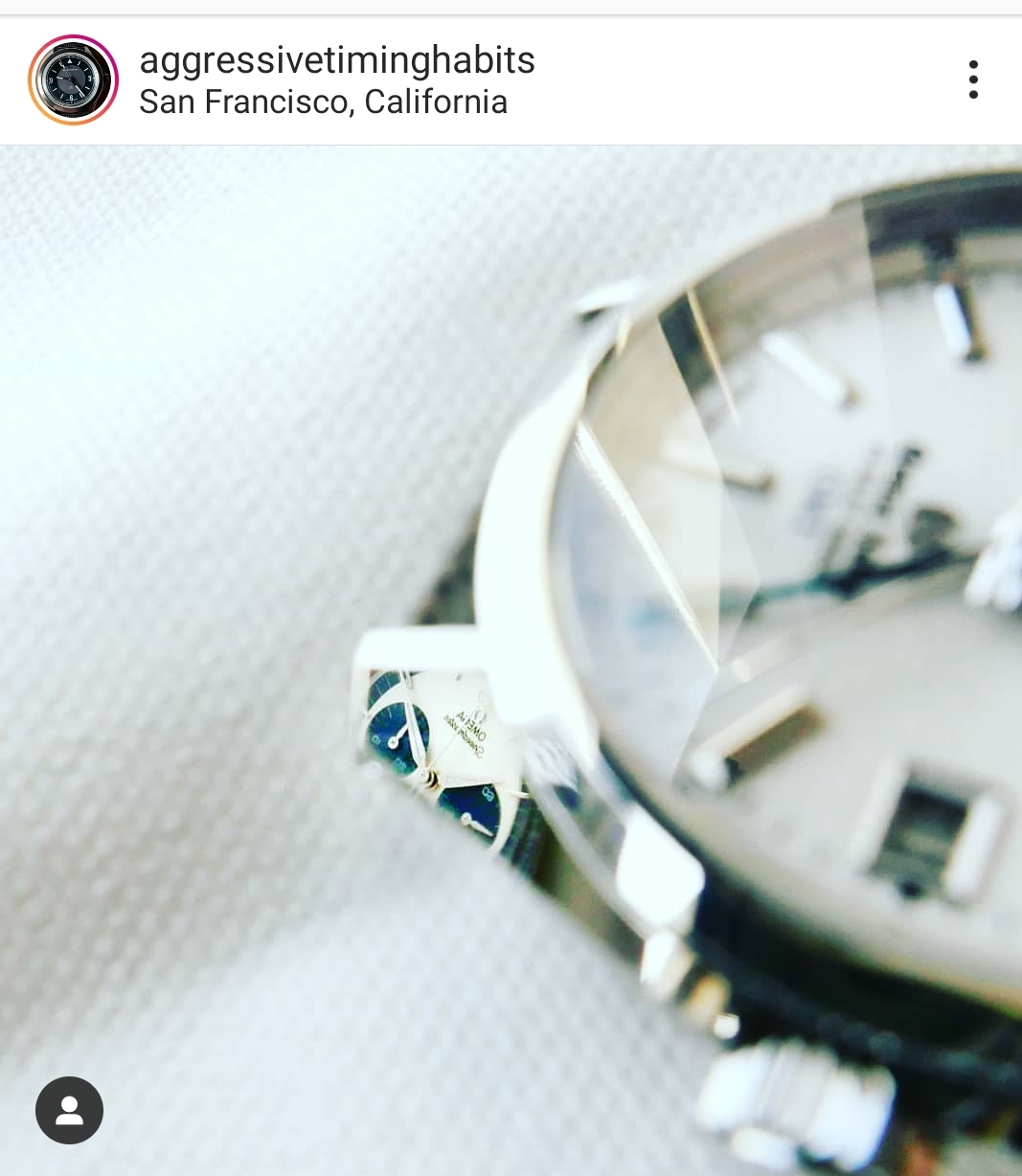 Next up, nearly breaking Half-watch Tuesday is @aggressivetiminghabits. He is a friend to the half-watch movement and has featured in the top pics before, but I have to be honest, it did feel like he was going to have a bit of a hiatus from the top table, such was the competition, then he posts this! Last week we saw the sapphire being used to reflect another watch, but only Grand Seiko zaratsu polishing could make such an image appear on the lugs of the 44GS case. Its’s an outrageous image to conjure, let alone capture. Well done. 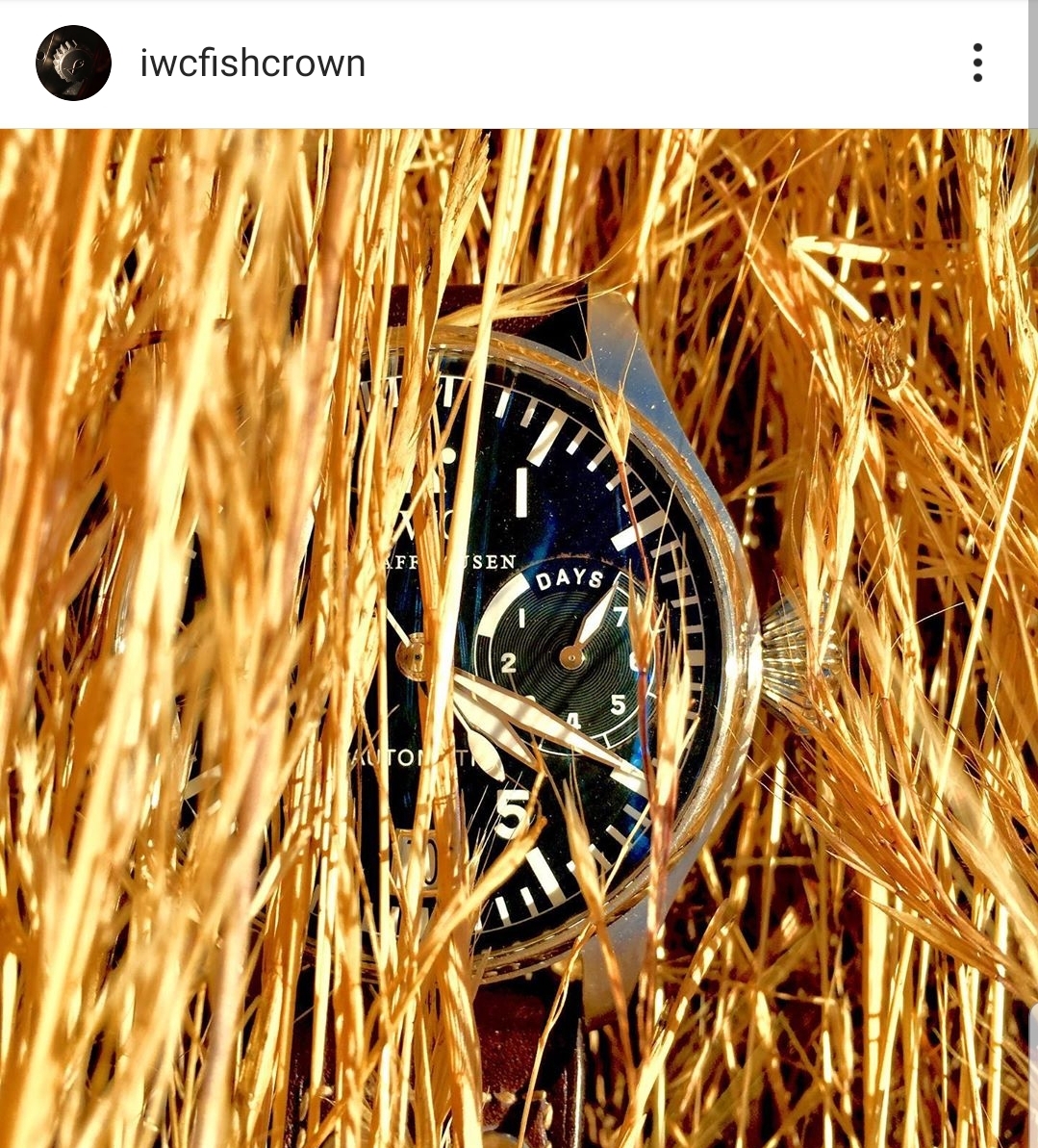 A watch pic is a watch pic and before HWT I thought there was only a number of ways you could shoot them. The best images are those which evoke memories or emotions, just like the next two. First up is the undeniably great @iwcfishcrown taking his now familiar place in the top pics. We loved the golden hues of the wheat against the bold Big Pilot dial, it made us long for long hazy summer evenings, preferably on the Portuguese coast. 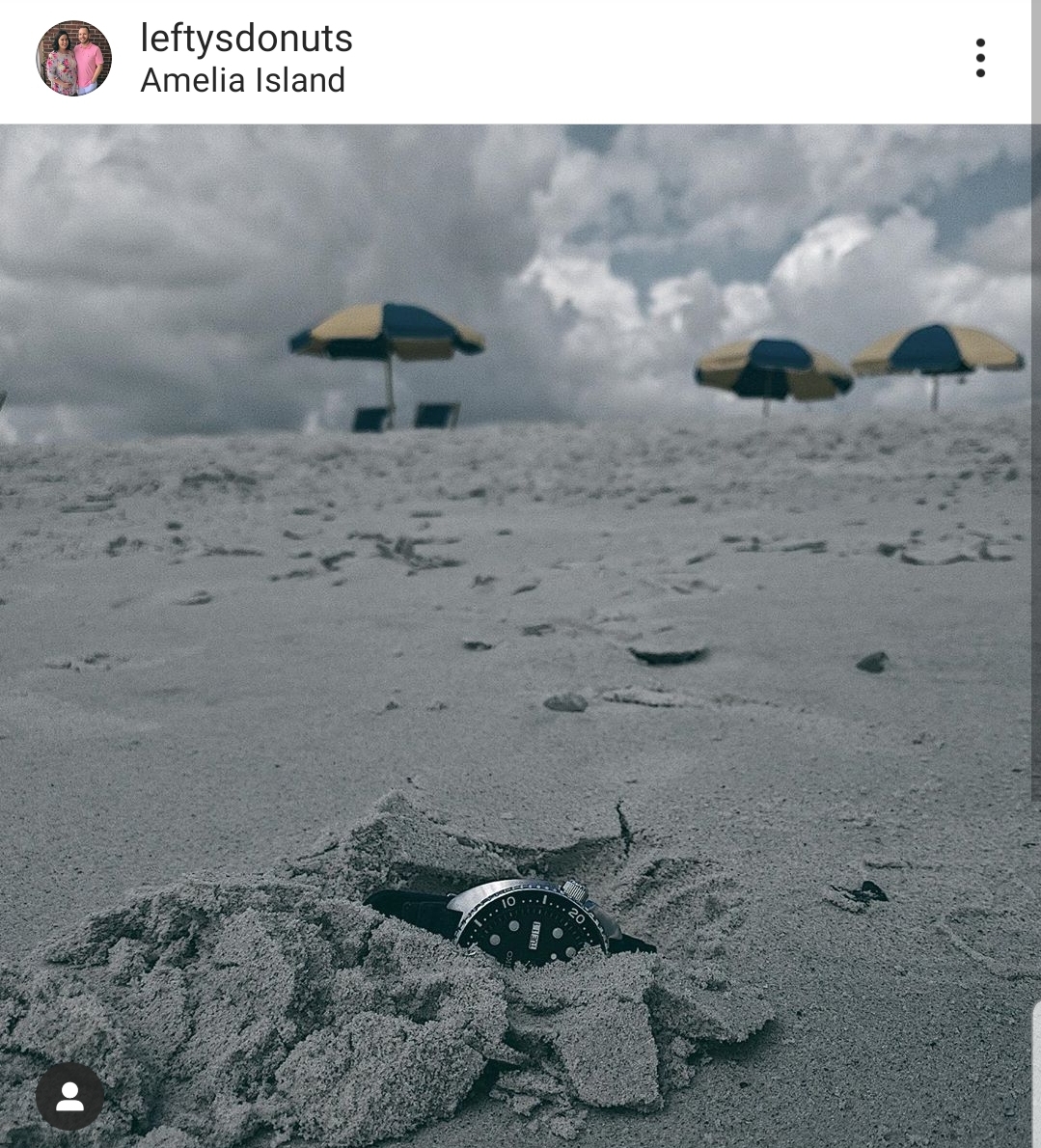 Living in the north of the UK the Sun is an infrequent visitor, but let that never stop us. @leftysdonuts pic showed an image many of us have probably experienced, a cloudy, possibly windy day out on the beach, building sandcastles whilst freezing out asses off and not caring one bit. 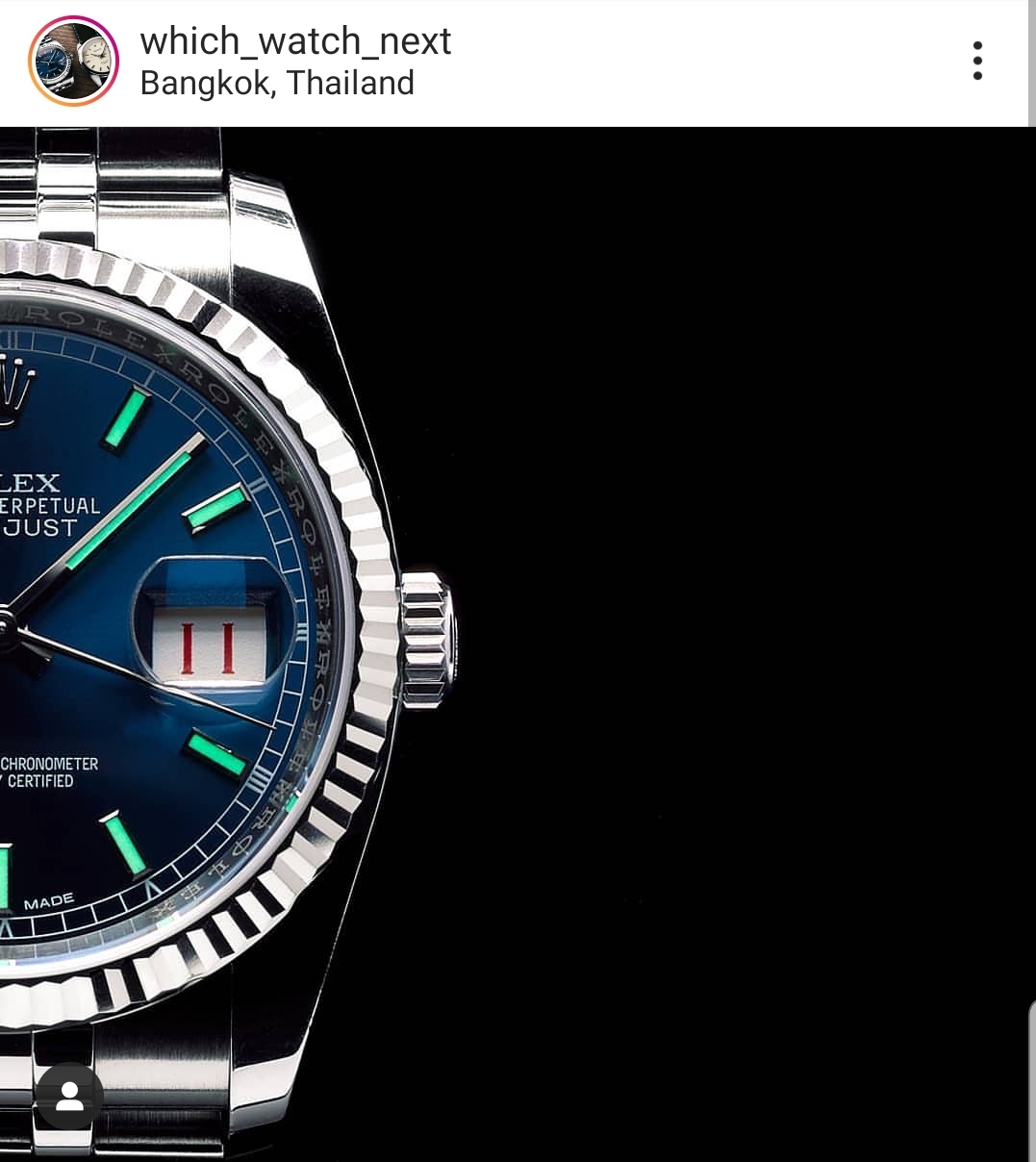 Coming in late to the party but with a bang was @which_watch_next with a drop dead stunning lume shot to his blue dial Datejust, the red date serving as that extra bit of garnish. Just purest perfection. 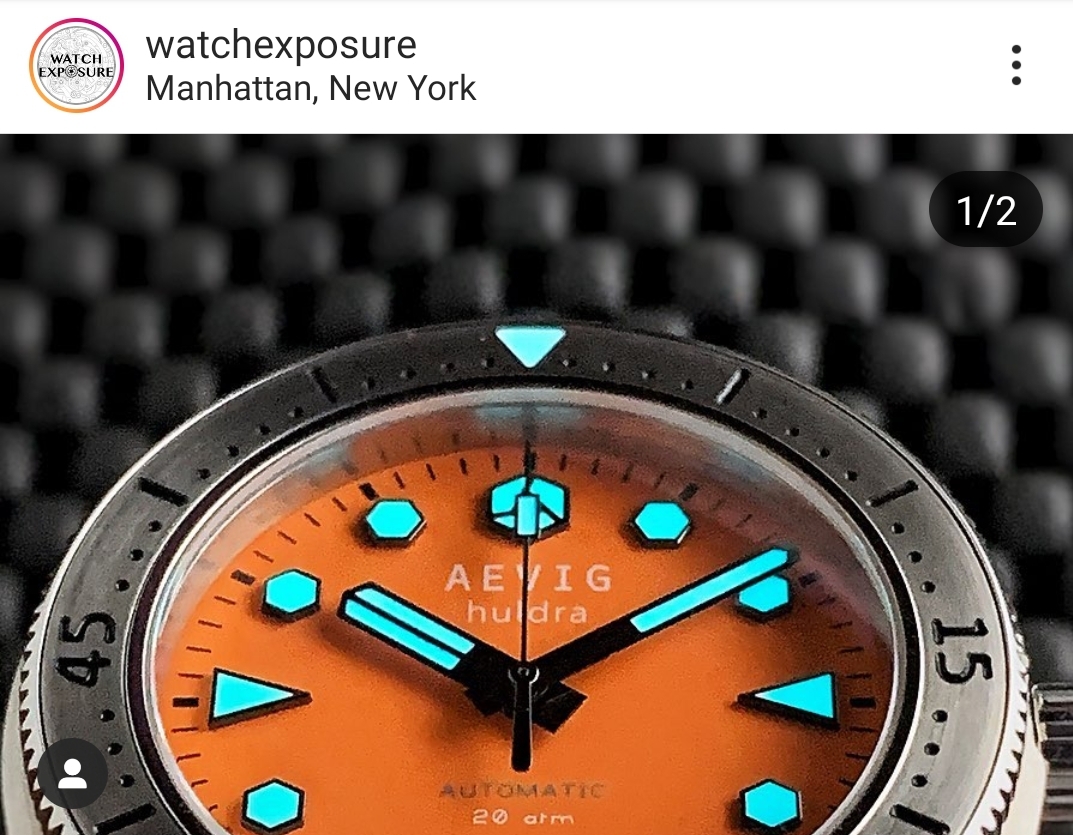 @watchexposure shows his credentials again with the most amazing snap of the upcoming Aevig Huldra, capturing the dial colour and lume with almost impossible accuracy. If this shot doesn’t make you want this watch then nothing will. 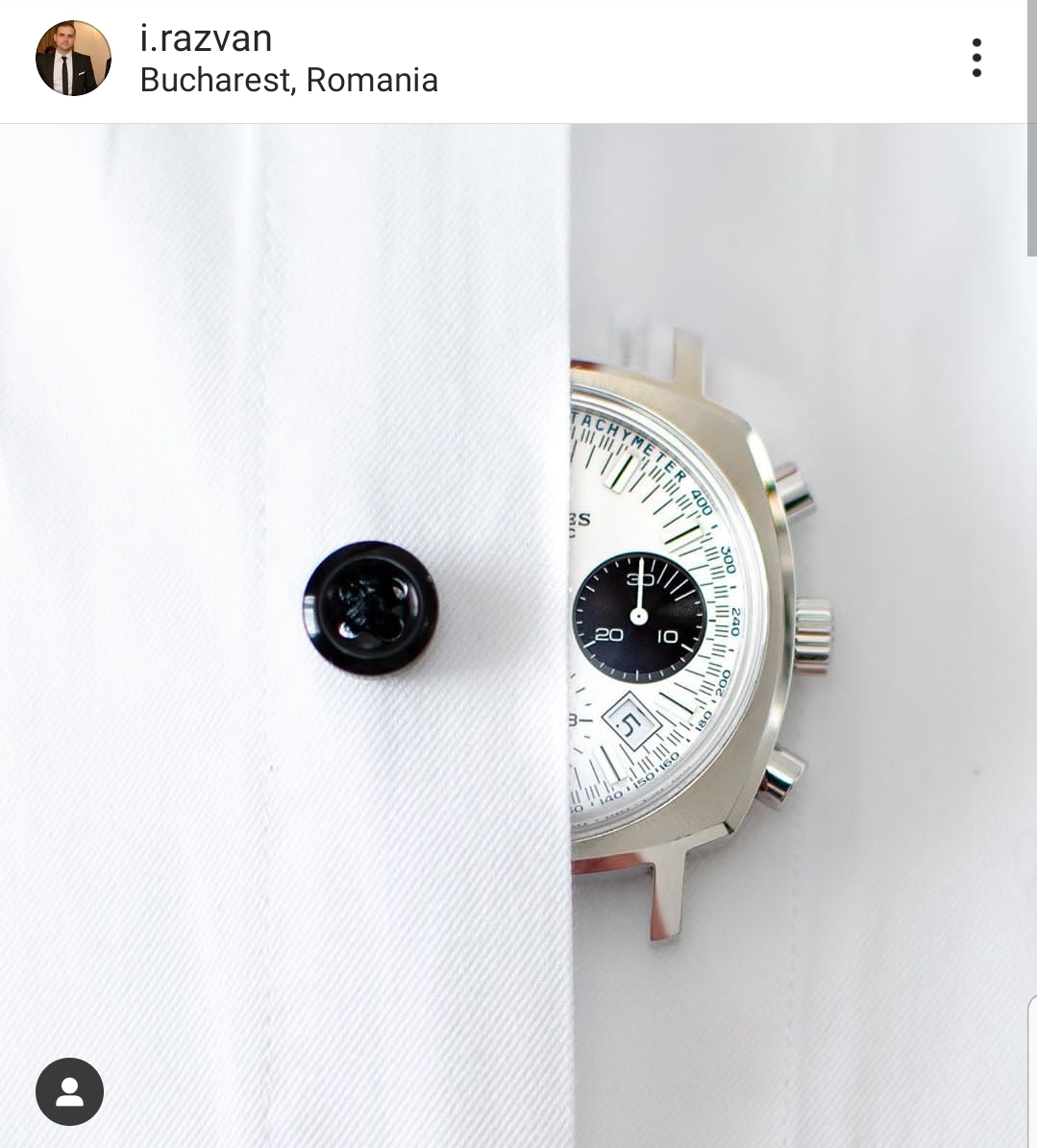 Lastly, it takes something special to get into top pics for a week, let alone two, but three weeks in a row with three posts is truly remarkable, but we couldn’t ignore @i.razvan with this piece of utter brilliance. Will he be able to make it four weeks in a row? We will find out next week.

A shout out the guys at @sidereuswatches for regularly partaking in HWT and a fantastic UFO style submission of their very classy Newgrange. 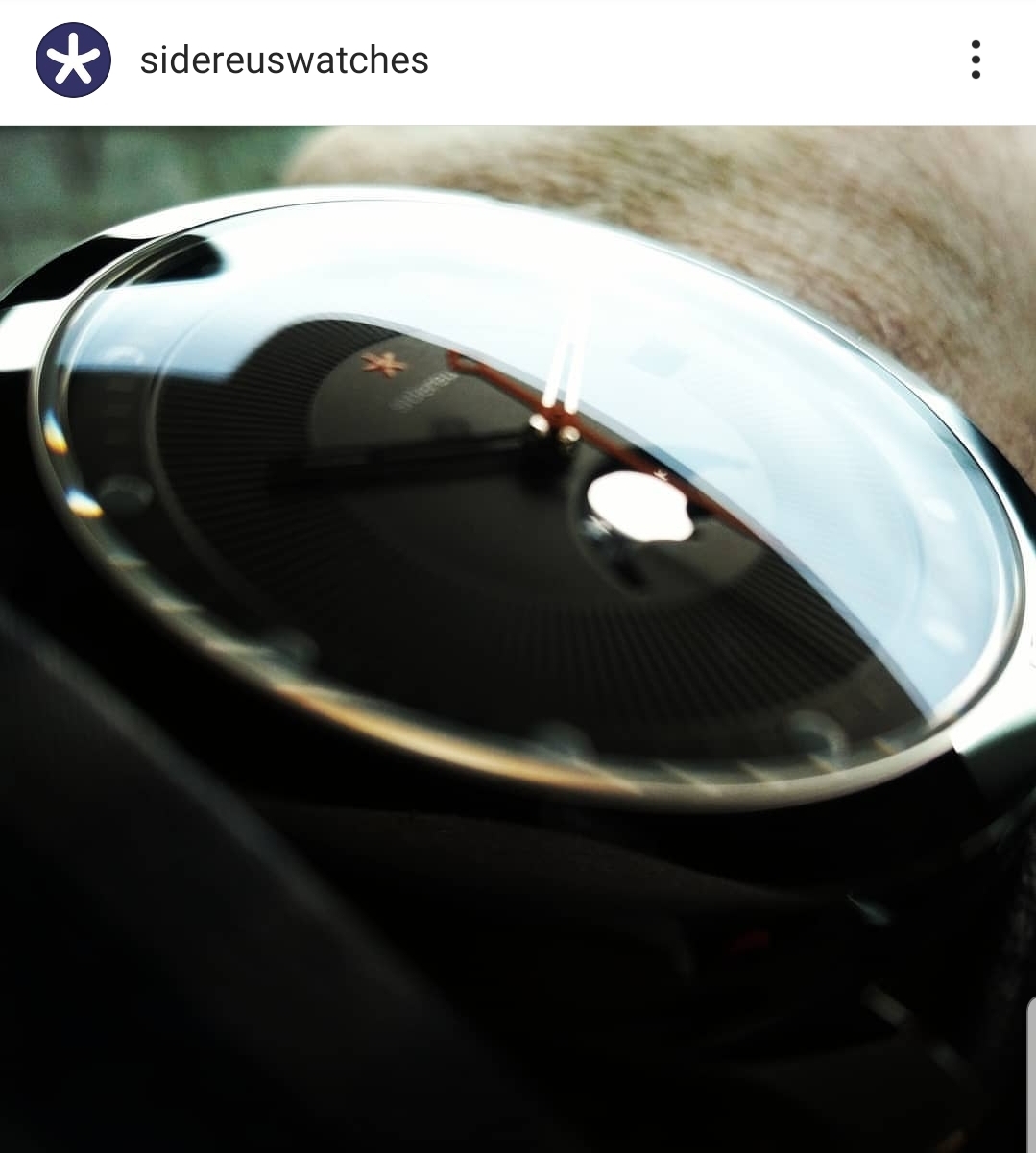 It’s not a photo but we can’t stop looking at @the_art_of_horology’s epic post. Thanks for posting guys and welcome to the movement.

Next up is @barkandjack with a £1000 watch from a brand that usually sells them at less than half that price. He’s up for doing a review of the Swatch Flymagic and has already received thinly veiled threats to keep it nice, look out for it on his youtube channel. Good luck to you mate.

(editors note : nothing “thin” about my threat, tank the resale price on this Adrian and your next #halfwatchtuesday post will be hallmarked with Archies face) 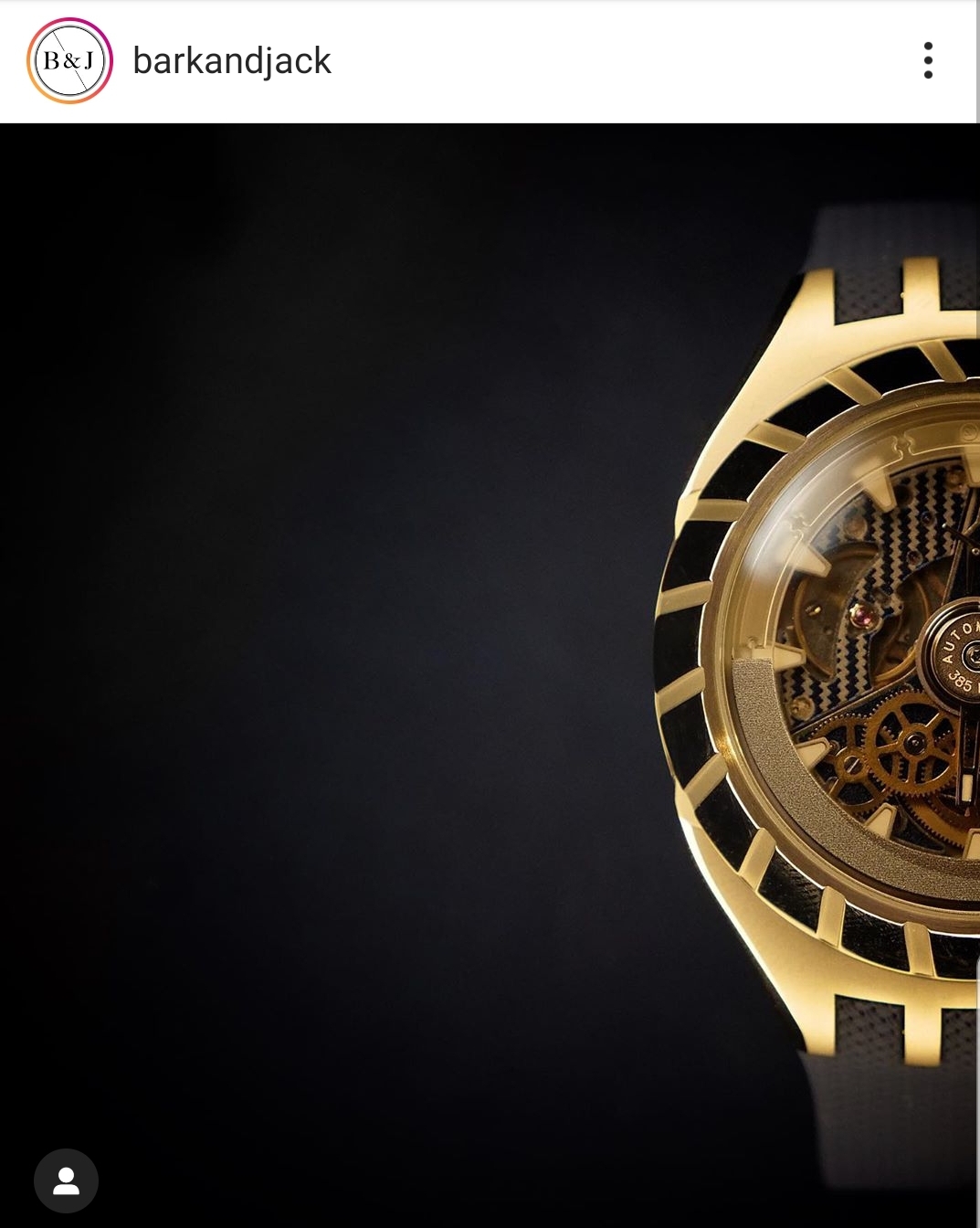 Finally, it is our great pleasure to shout out one of our favourite podcasts. We laid down some subtle hints we were amenable to a swipe right and got a real tingle in our funny bits when @40and20 joined the half-watch party with a smashing Vostok post.

We can genuinely say we love the podcast and it is one of the best in the American language. Personally the ‘State of the microbrand’ and ‘Under the radar’ episodes were brilliant and even as a teetotaller I love the beer chat, perhaps there can be a coffee and watch podcast…ahem @Barkandjack 😊. Does this mean we love @scottishwatches less? Don’t worry guys you will nearly always be a swipe right. 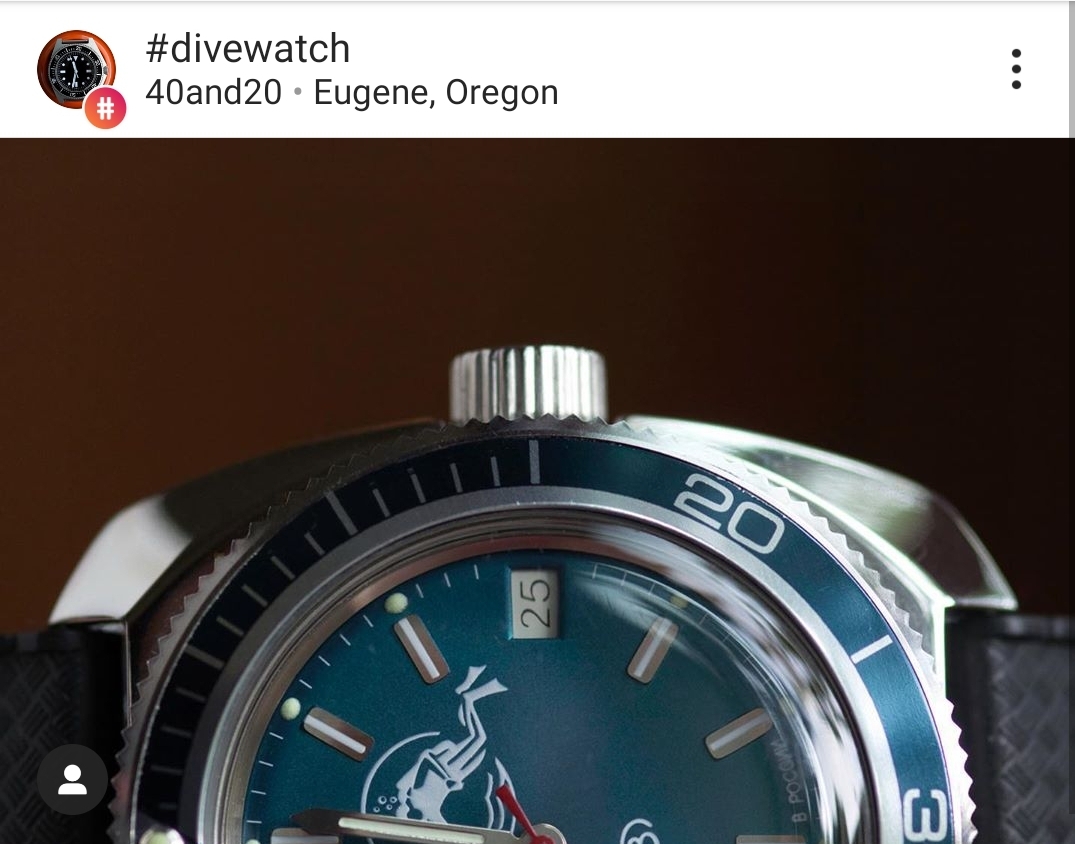 That closes another round of HWT, next up is week 10, which to be honest we never thought about reaching. Thank you for all the encouragement and kind words, hearing that we have perhaps helped you guys think differently about how you capture pictures of your watches is music to our ears and all the praise we could ever want. Until next time…Thanks.