After about 7 years being deep down the horological rabbit hole I had sampled all the usual and some of the less usual suspects.  By the time I got my first Rolex (Submariner, natch – 16613 Serti – not so natch) I felt I had reached the ultimate in fine watchmaking.

Little did I know that I’d only just begun to scratch the surface. 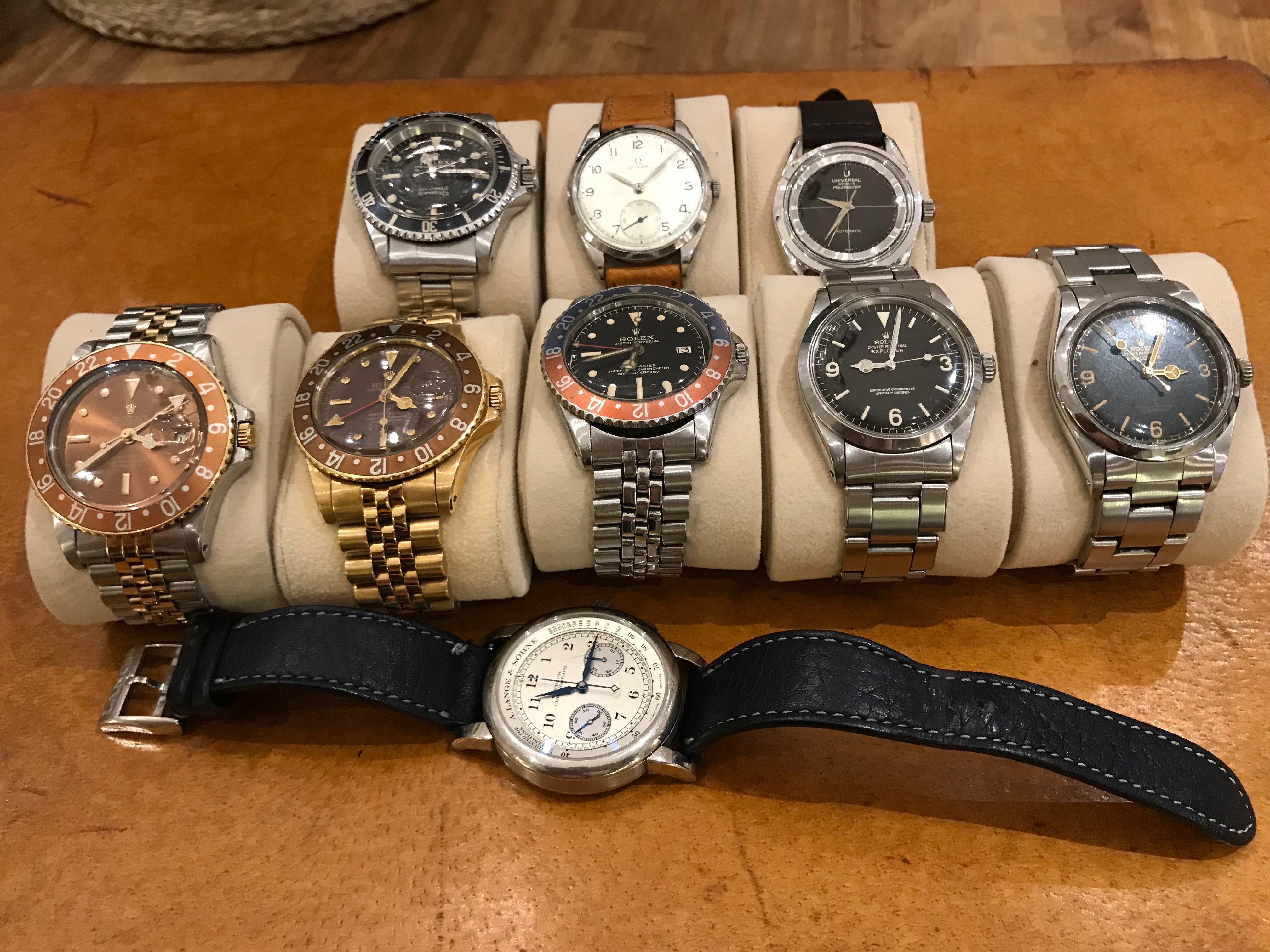 From that first Rolex, followed a tumultuous descent into vintage Rolex and a whirlwind of references came and went.  Some missteps were sold on during the ever-rising tide of all things Rolex and the successes were kept and admired Gollum-like as prized possessions to be shared on the forums with other like-minded fetishists.

As prices of vintage Rolex climbed from ‘heady’ to ‘ridiculous’, the penalty for making a wrong move or even just trying to flip got more and more uncomfortable.  I started to look elsewhere, figuring that for the same price as an old Sub, one could obtain a truly Haute Horlogerie piece.

For a long time, I had a soft spot for A Lange & Sohne.  Initially, it was the Lange 1 which caught my eye – in rose gold, brown crocodile strap.  When travelling on business I would often find myself in a Lange AD or boutique and try one on to see if it would click.  It never did.  But on one of these visits, the sales associate presented an 1815 Chronograph  I had never really looked at this model and I guess I probably expected that movement would be similar in appearance as the Lange 1.  Although finely finished, the Lange 1 movement is largely covered with the traditional 3/4 plate which prevents most of the movement being seen, with the exception of the signature engraved balance cock. 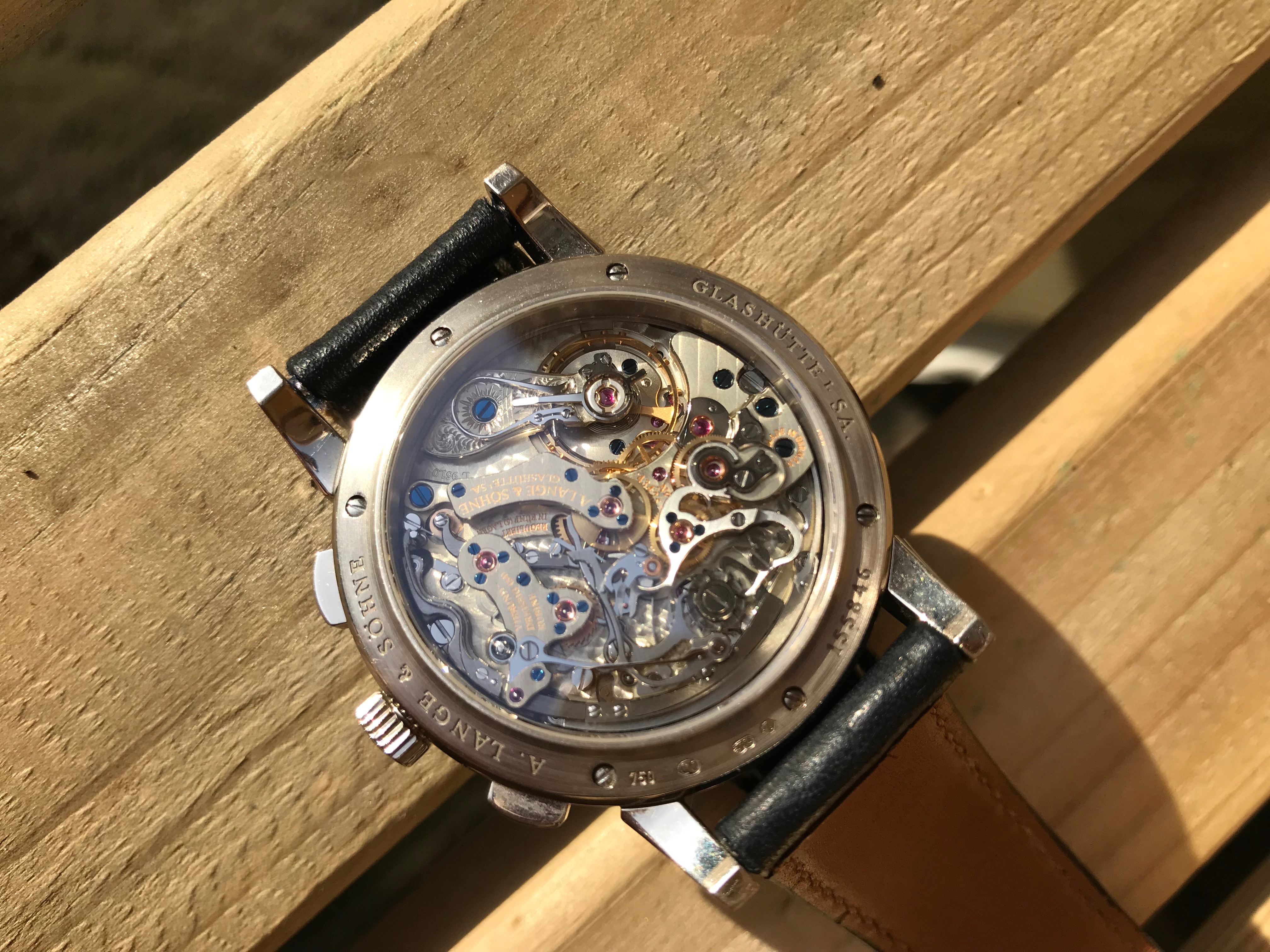 The 1815 was a whole different story, the view through the exhibition case back was simply amazing.  I had one other chronograph at this time with a sapphire case back – showing a rather pedestrian ETA 7750.

The view of the 1815 chronograph movement was like nothing I had seen before.  The depth, the colours, the different finishing techniques – all of these simply mesmerised me.  Of course, on discovering the price I thanked the associate for their time and headed off to dream but with no real intention that I’d actually ever own one.  Maybe a pre-owned Lange 1 at a push, but not the 1815 Chronograph. 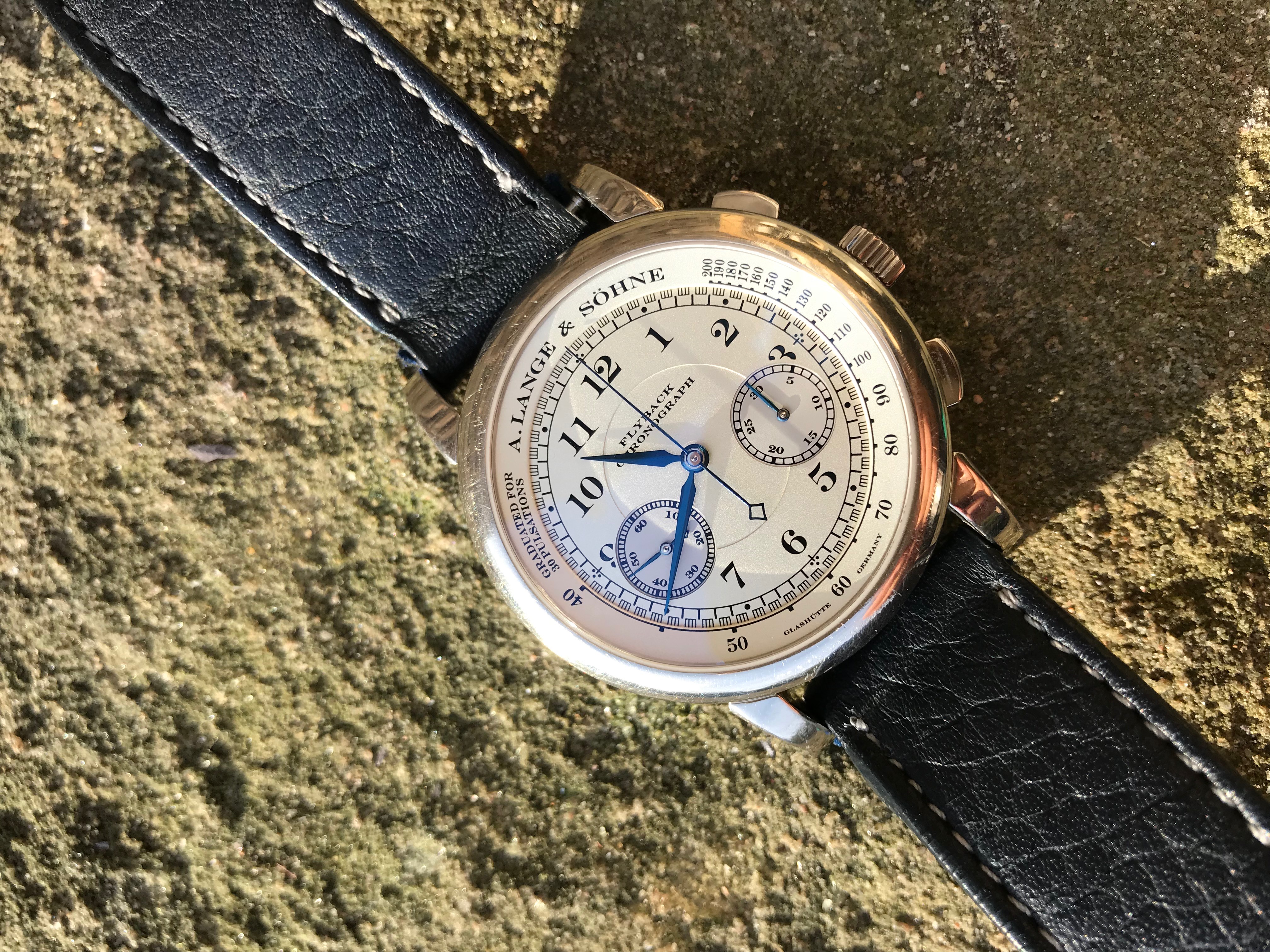 Over the next few months and years I continued to try various models and brands, but I kept feeling that I was missing something truly ‘next level’.  I had consumed all the content available on the 1815 Chrono online – by now realising it was the same movement as the fabled Datograph, which, incidentally, on trying the Datograph I found it to be just too thick on my somewhat skinny wrists.  At 39mm across and 10.5mm thick; the 1815 Chrono really hits the sweet spot of having a presence but still being discreet. 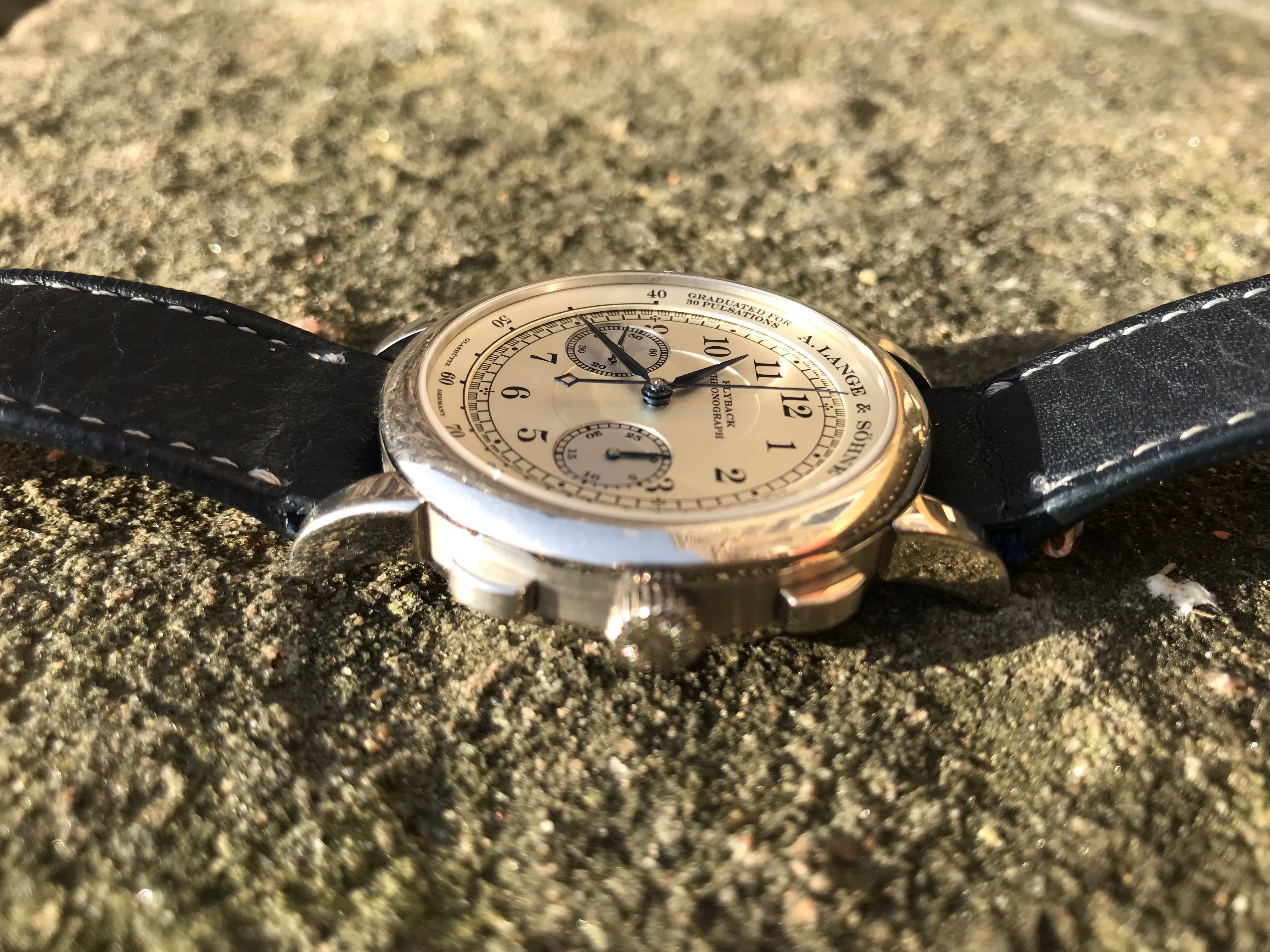 The 1815 stayed on my mind, I could not escape the siren call and knew that I’d eventually have to give in.

I was torn between the original dial model from 2004 with the pulsation scale and the (at that time) newer model with no pulsation scale – in white gold.  I still can’t believe I spent so much time deliberating between the two as now I have no doubt which I prefer. 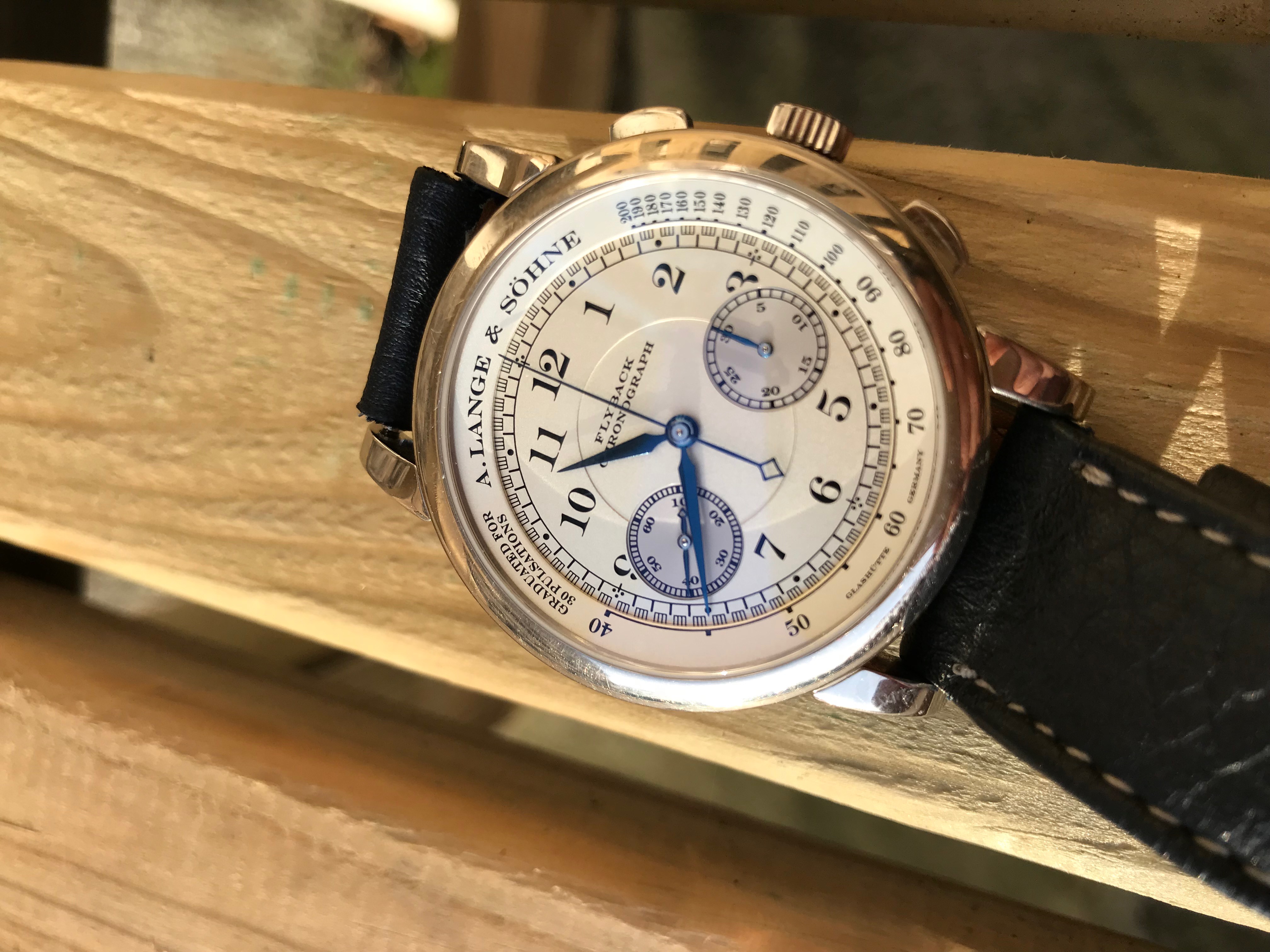 Being based in the middle of nowhere in South East Asia somewhat compounded the problem as I was a 2-hour flight from anywhere to even see a decent watch and even further from somewhere I could view the particular models I was considering.

In the end, fate intervened and the exact piece I was looking for turned up on Chrono24, listed by a dealer in the states just days before a planned holiday to the in-laws.  This could be no coincidence – only by divine providence could this have occurred.

So it was with this God given sign that I wired the money across the ether and received a FedEx package in the mail at my in-laws a few days after Christmas.  It had, by now, been a few years since I had last seen the piece in the metal and I was met with the same visceral feeling when admiring the movement as that very first time. 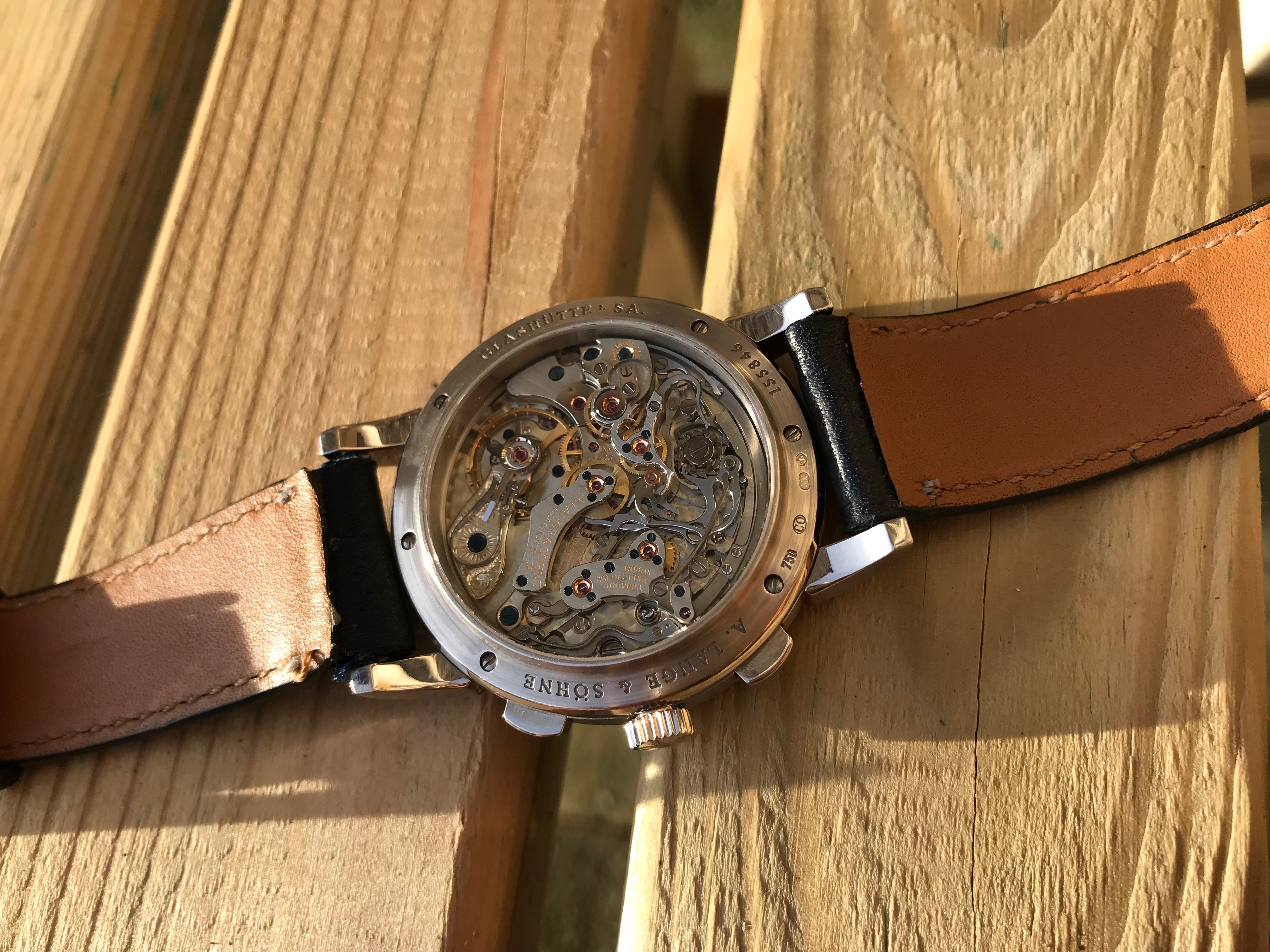 This, despite consuming every movement macro shot available online.  Playing around with the watch in different lighting never gets boring.  I have yet to buy myself a loupe due to a fear that some of my other pieces will be spoiled forever on discovering hitherto unknown ‘defects’.

I have no such fear with this piece. 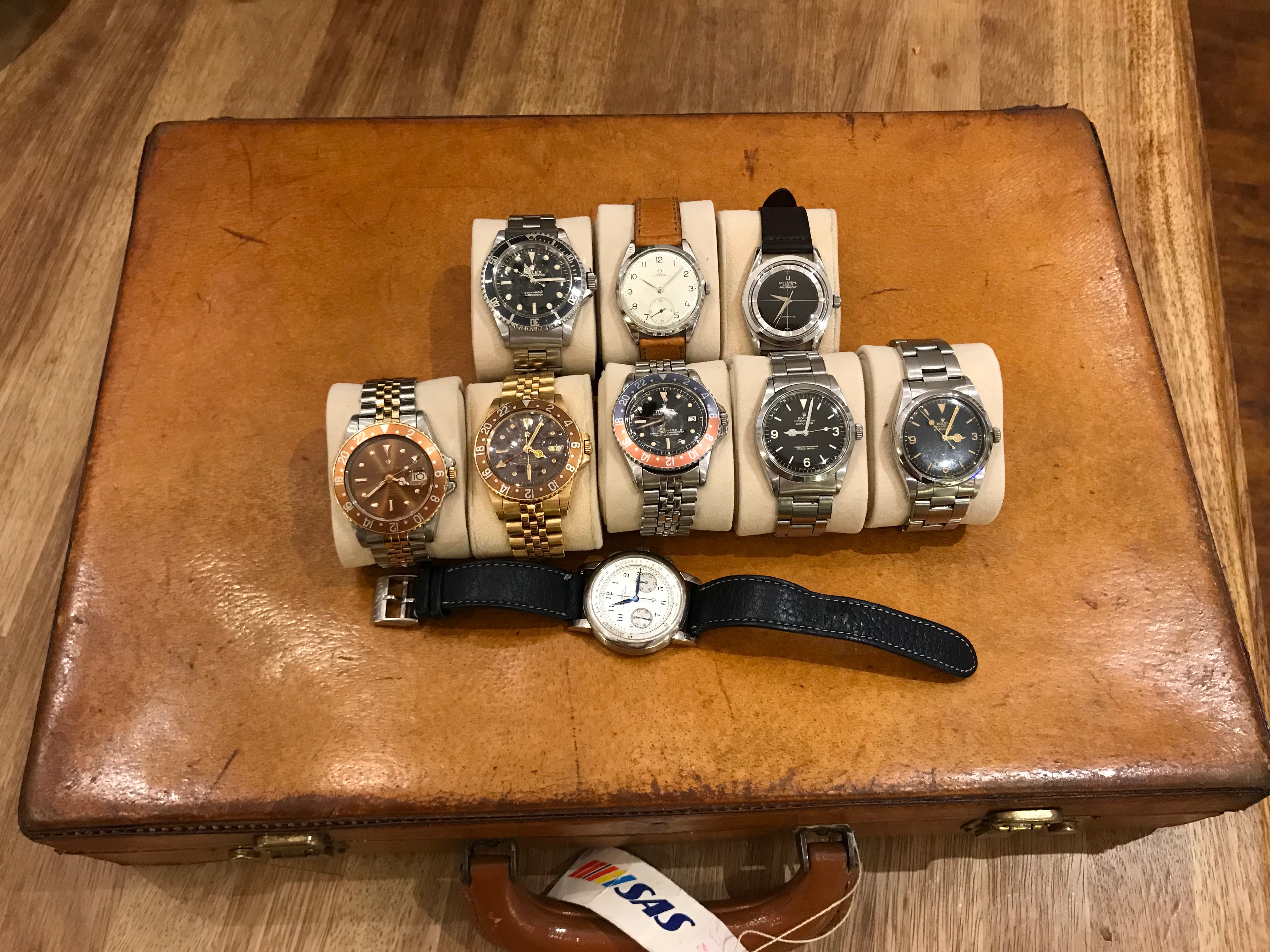 That was several years ago and this piece is still a regular in my rotation, often it’s the only one I take on holiday.  Many of my other watches would likely bore me after a couple of weeks without change, but not this one.  There’s always something to admire depending on the lighting or whether looking from the front or back.  The depth of the dial is almost as mesmerising as the rear, with so many different levels and contours which all catch the light in different ways.

Daily winding is always a pleasure, with the buttery movement.  The start, stop, reset buttons operate smoother than any mechanical chronograph I’ve tried. 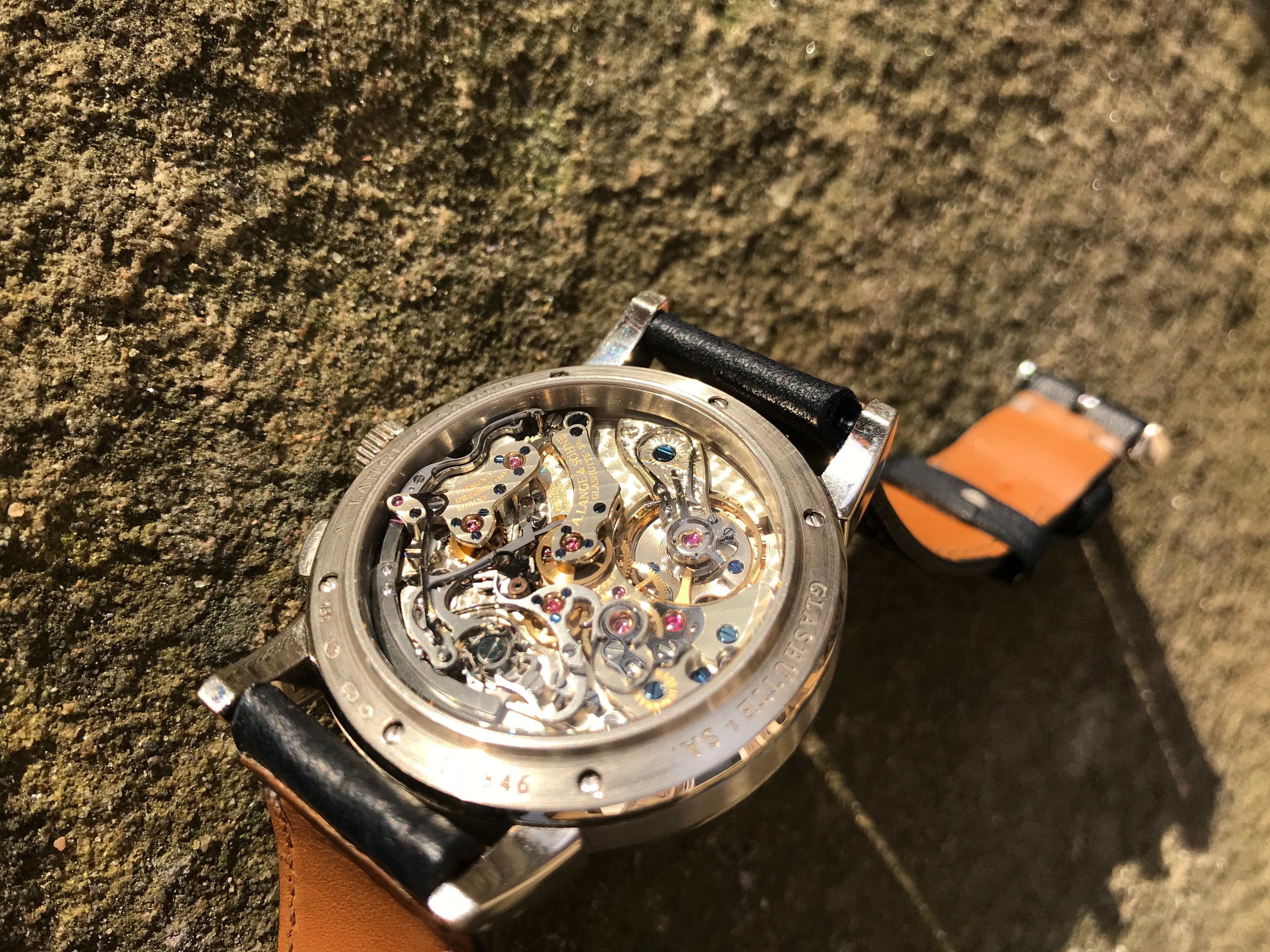 One thing which did need to be changed up almost straight away was the black crocodile strap.  Although undoubtedly good quality, it was far too formal for me to wear day to day.  Fine in a suit but that’s not my usual get-up.  I’ve experimented with a brown shell cordovan which was nice but a little too supple for the weight of the white gold case.

I’ve settled on a dark blue calf skin strap with silver stitching to match the blued hands and white gold case.  It seems to work pretty well and I haven’t felt the need to change it despite putting ‘new shoes’ onto other pieces regularly to keep them feeling fresh. 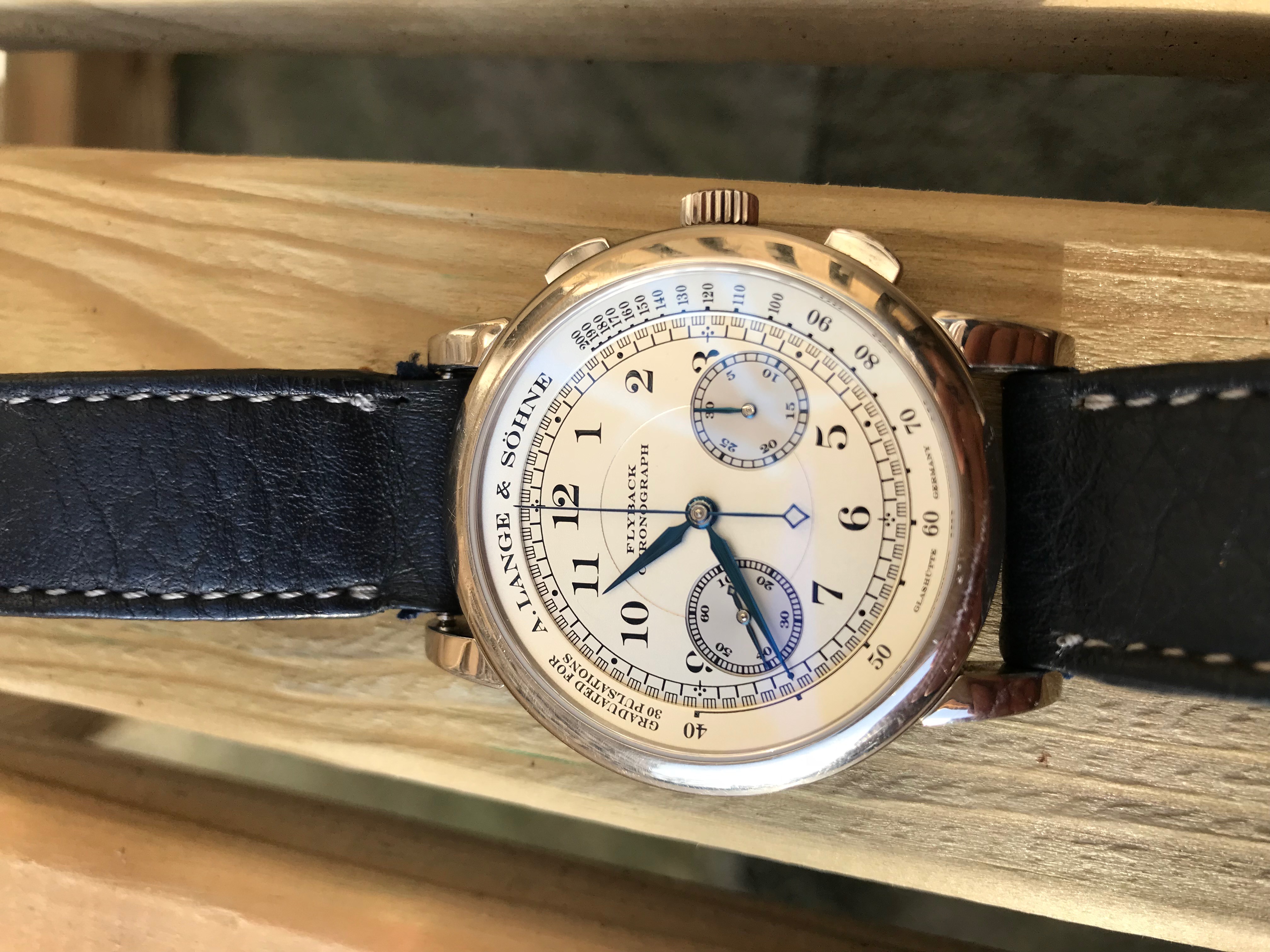 Since I bought the watch, A. Lange & Sohne have redesigned the watch for the second time and it is now once again available with the pulsation dial.  One omission remains, however, and that is the blued hands.

The change to white gold hands instead of the wonderful contrasting blued hands leaves me in no two minds of which I prefer.  The dial of the new models is undoubtedly well balanced, perhaps more ‘harmonious’ but to my eye, it seems to have less character than the original. 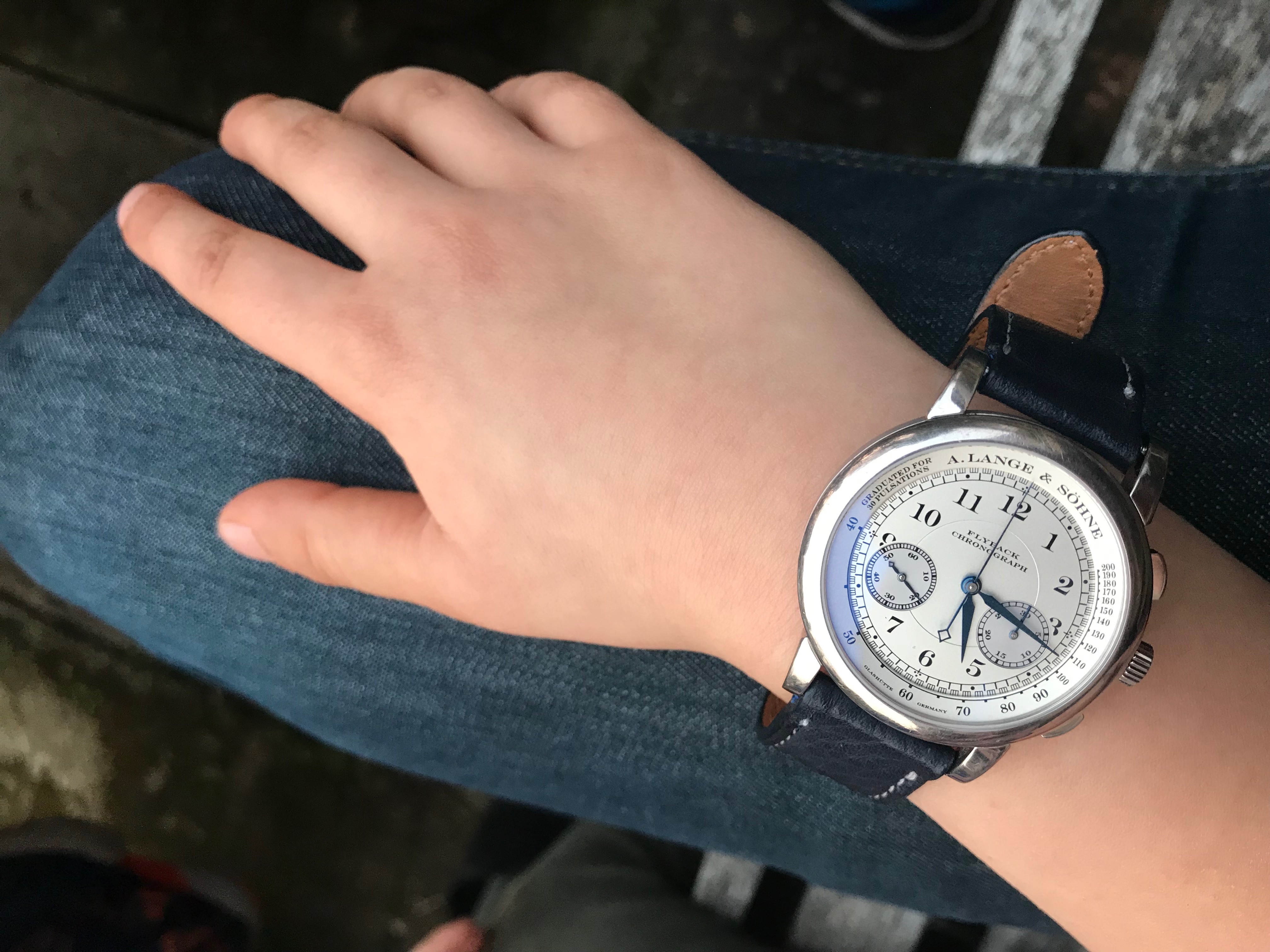 Like many WIS (Watch Idiot Savant), a true ‘keeper’ watch is hard to find as my tastes change over time and as I learn more.  However, with this piece, I can’t see it ever leaving.  It would be painful to trade down and I don’t see how I could really move up from this piece so for these reasons I think this will always be part of my collection.

Also, one of my daughters really likes it and already has decided she wants it when she’s older.  She’s currently seven so I reckon I’ll still have it for quite a while. 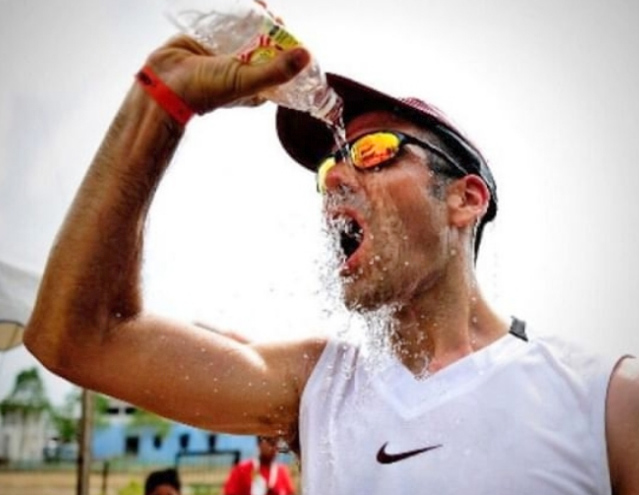 North East Scotland based watch collector with a running and biking problem. After finding cycling to be somewhat expensive, he has inoculated himself by going deeper and deeper down the horological rabbit hole to the point where high end cycling gear now feels like a relative bargain.