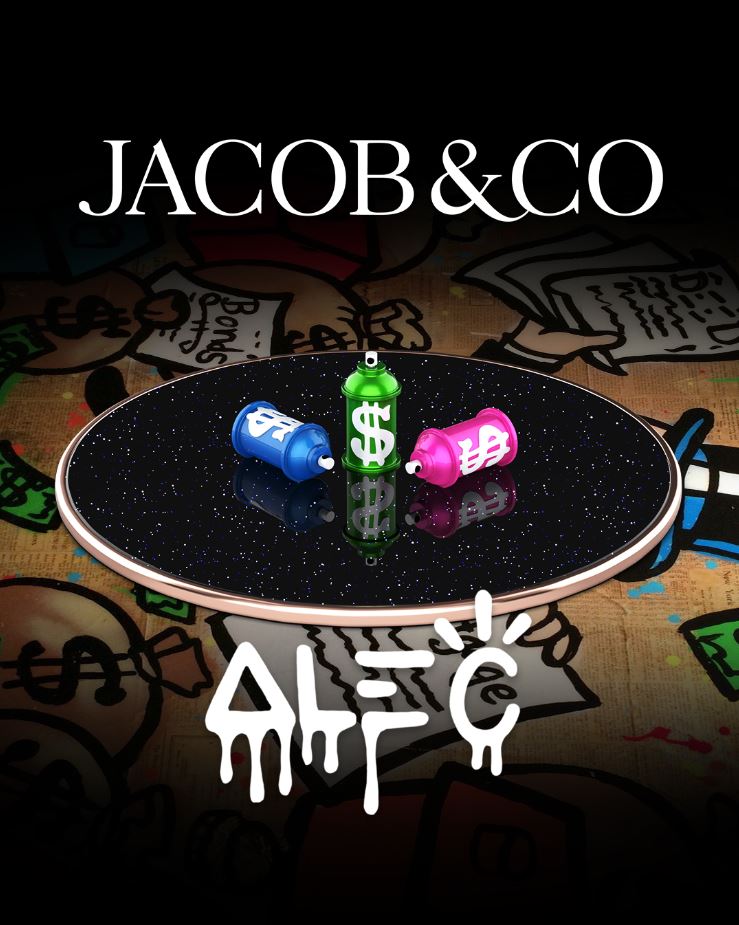 This week is a week of collaboration with Jacob & Co  and Omega dropping collaborative pieces, and Tag Heuer teasing one. Besides that, we have the Timepiece Gentleman’s mess, EPHJ’s trade show confirmation, Watches of Swizterland’s stellar financial performance before Audemars Piguet rounds off the week with its 34mm Royal Oaks.  These are the top 7 things in the world of watches; let’s get into it.

The Farce of The Timepiece Gentleman 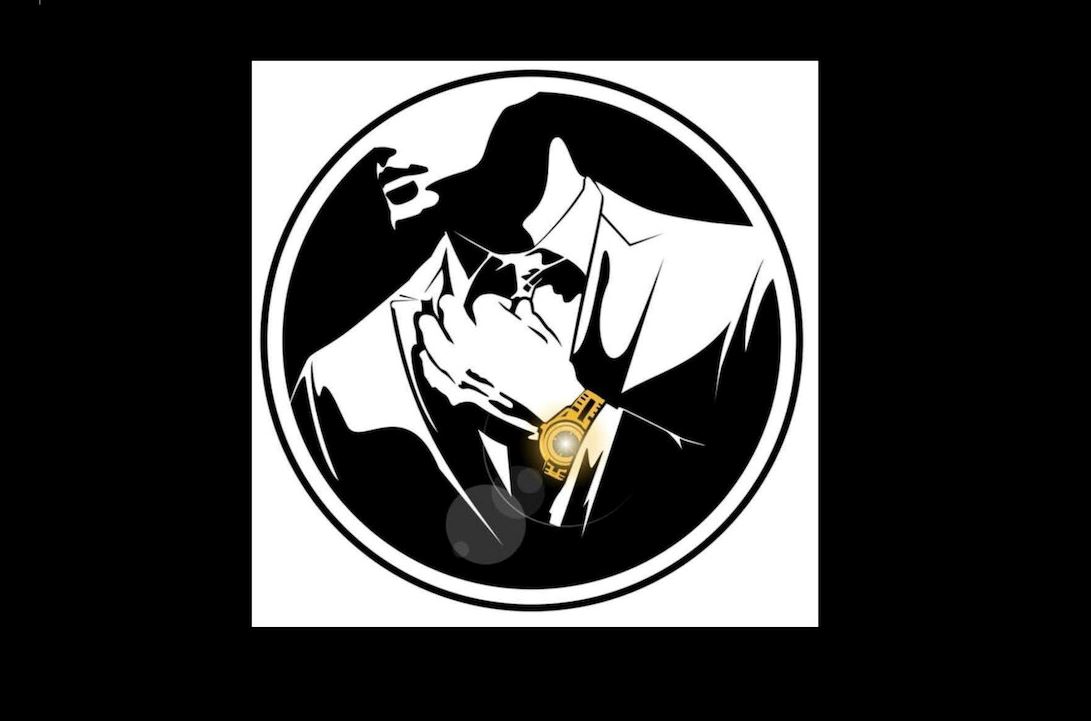 In the past two weeks, one of the most talked about topics has been the scandal/furore revolving around The Timepiece Gentleman. For those, who don’t know about them (and at this point you are better off not knowing),  The Timepiece Gentleman was run by Anthony Farrer and Marco Nicolini. The business was primarily that of a watch dealer, but they made their name through their YouTube channel that went very much against the grain of most watch YouTuber channels. After all, they were producing long form videos, that showed them living the high life while also revealing a lot of the ins and outs of watch dealing as a business. Well, a week ago, they disappeared, after taking down their website, social media platforms, and even scraping the name off their storefront glass. Naturally, many thought they had taken the watches that they had on consignment and ran. Well, turns out it was all one ill-conceived PR stunt, as they revealed on their YouTube channel. A PR stunt that they clearly did not expect to receive the kind of backlash they clearly are. A PR stunt that they then presented as a charity initiative, only to inadvertently reveal that that was something they only thought up after they realised the whole idea had backfired spectacularly on them. A PR stunt that they then tried to remove unflattering comments of, and eventually deleted the original video of only to post another clear afterthought apology that didn’t actually really contain a proper apology. Why? Well, thanks to the thorough research that Rikki, one of the overlords here, did, it appears that the pair came up with this hare-brained idea because their YouTube performance had been declining in recent months after its initial three month spike. For the full discussion, check out this week’s Monday Scottish Watches podcast, now available on your podcaster of choice. 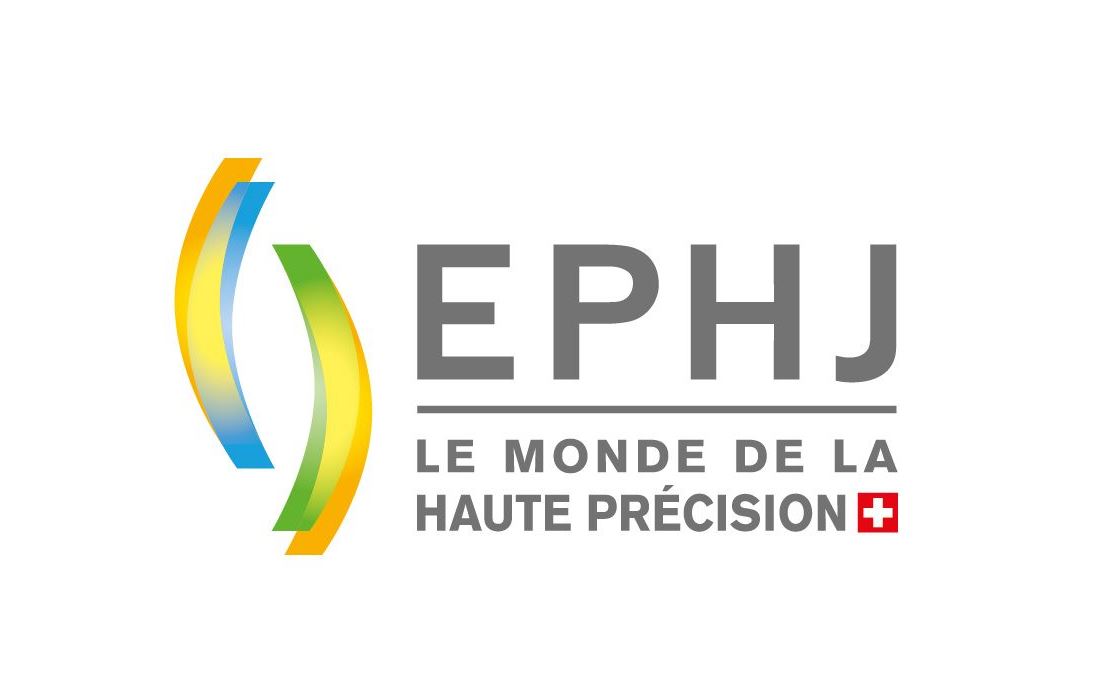 In lighter more pleasant news, EPHJ, was scheduled to be back this year and has now been confirmed to run from 14 to 17 September at the Palexpo in Geneva. The watch and jewellery trade show is more focused on the creation, development and manufacturing process of these works of art as opposed to the more final product centric trade shows like Watches & Wonders. While this may not be as talked about as trade shows where watches are launched, it is an interesting opportunity to take a peek behind the curtain so to speak and find out what is actually possible in the watchmaking world. Also, it is a further encouraging sign that the world is on its path of recovery and watch gatherings could actually be a thing sooner rather than later. 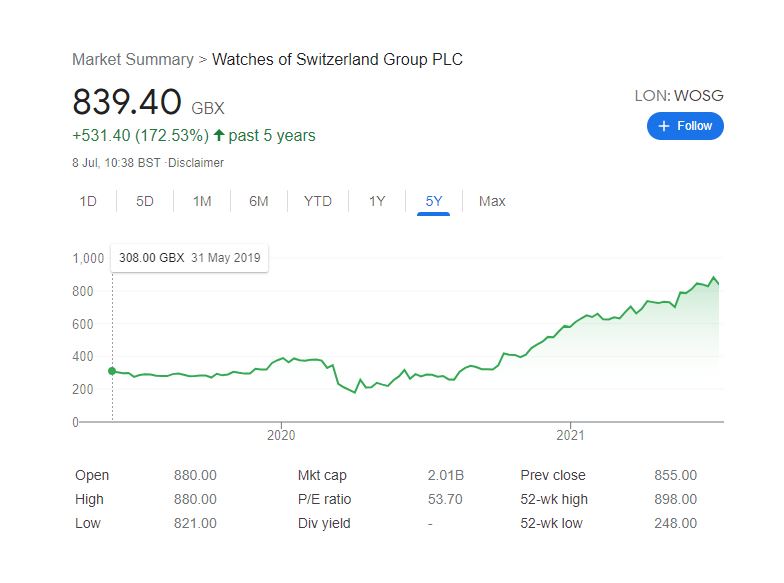 Speaking of encouraging signs, Watches of Switzerland this week released its financial results for the financial year ended 2 May 2021 and the results have been remarkable. Overall revenue increased by 13.3% despite stores in many regions being closed for much of the year due to the pandemic. Some regions naturally outperformed others, and the US in particular registered a 38.5% increase in sales. The fact that the pandemic all but eliminated one of the company’s biggest source of revenue i.e. tourists, adds further gloss to how remarkable this performance is. Most of this positive result is attributable to watches which makes up 87.1%. As expected, the group’s emphasis on improving the ecommerce distribution channel has also paid off with revenue from that segment rising 120%. All this has put the group in a strong position for the coming year especially with the situation around the world appearing to have improved in recent weeks, and it now has set its sights on expanding its business with new stores and acquisitions. The strategy seems sound, with a focus on developing closer relationships with domestic clients who have been the foundation of this very successful financial year. It will be interesting to see the numbers in a year. 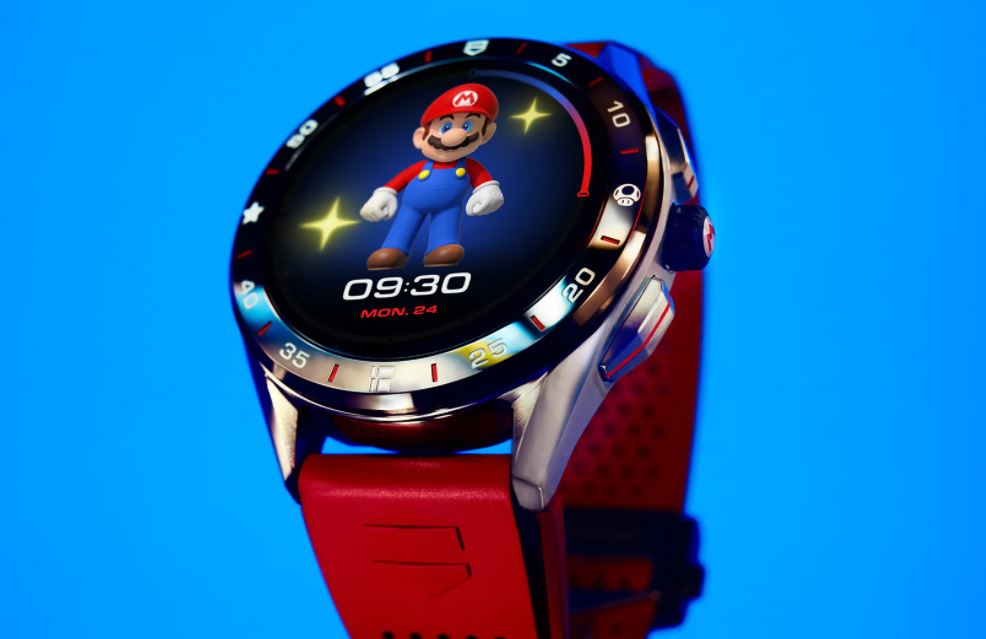 Yeah so below was what I was hoping for and above is what we got……..

After two Tudor teaser releases in recent months, it’s now Tag Heuer’s turn to tease a watch release. This release is not going to just be any release, as it will be a collaboration with none other than Super Mario. While no specific details have been on what the watch will be, I naturally presume that the connective tissue would be in Tag Heuer’s racing DNA and Mario’s really fun karting, so perhaps a new Monaco or another limited edition vintage design Carrera. The latter seems highly plausible given that Mario himself is rather vintage at this point of time. Anyway, the teaser looks really fun and I fully expect the watch to be as well when it drops tomorrow on 13 July 2021. 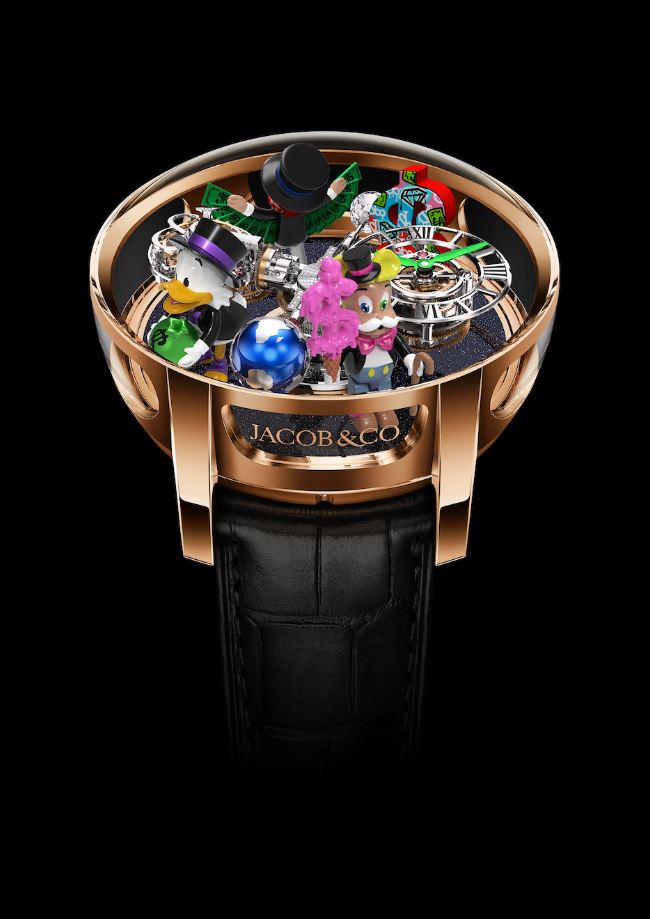 While on the topic of fun watches, Jacob & Co. have now released an Astronomia in collaboration with Monopoly. Now, if you are as ignorant as I am, then your initial thoughts would have gone to the once popular board game. But no, this collaboration is with graffiti artist, Alec Monopoly whose graffiti style is based around, you guessed it, the boardgame. And that brings us full circle. The watch is as fun as you would expect a monopoly based watch to be, with beautifully tiny sculptures from the game that are sculpted in gold then hand painted by the renown graffiti artist. Now, this watch could have easily veered into cartoonish category which would have made the watch feel like a cheap flea market piece. However, Jacob & Co. prowess which it has displayed in their Astronomia line combined perfectly with the artistic talent of Monopoly to keep this watch tethered firmly in the kick ass watch category that its US$600,000 price tag suggests. The results? Absolutely brilliant. 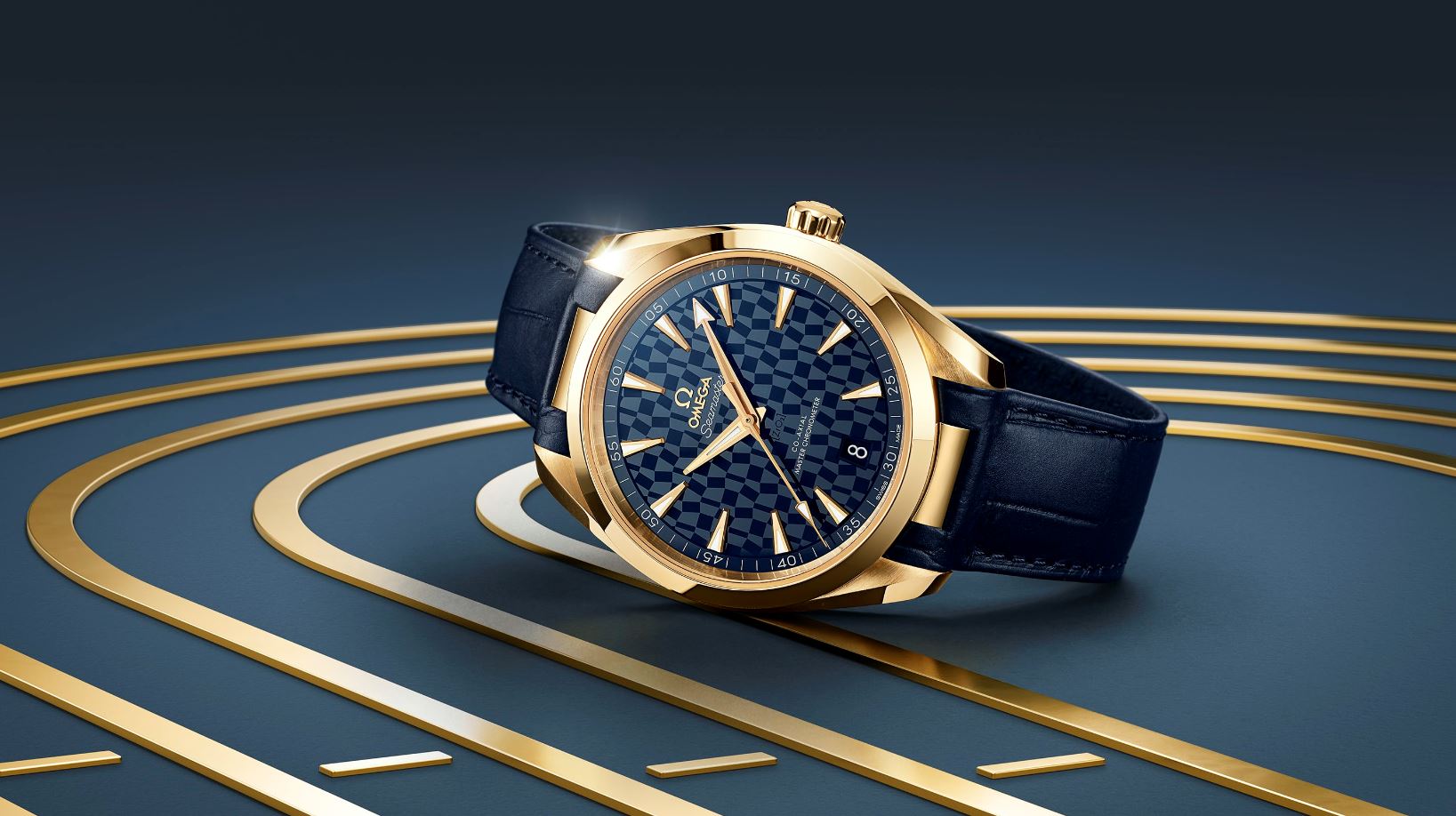 Omega has not had the best of luck with their collaborative watches, the pandemic scuppering plans for their tie-ins with James Bond, and the Olympics. The upside? Well, the brand gets to milk their collaboration for another year and hence release another collaborative piece in its Seamaster Aqua Terra line. It is a beautiful looking release too, with its “Olympic Gold” case. After all, yellow gold is not a common choice nowadays with most brands opting for rose gold, or in Omega’s case, Sedna Gold. Well, yellow gold has always been the real shade of gold and the Olympics knows that so this is certainly fitting for the occasion. The dial is interesting too, with a rich navy blue what has a sort of distorted chequered flag pattern. The watch comes in two sizes, 41mm and 38mm and I for one am happy it did. The Aqua Terra after all is a far more versatile watch that almost anything in Omega’s line-up and this celebratory piece deserves a dressier size too. The rice grain indices on the smaller model works very well too with the dressier size though I wonder why the brand insists on differentiating the two sizes. Overall, a lovely release from the brand for what must surely be the final Olympic edition before the actual event? 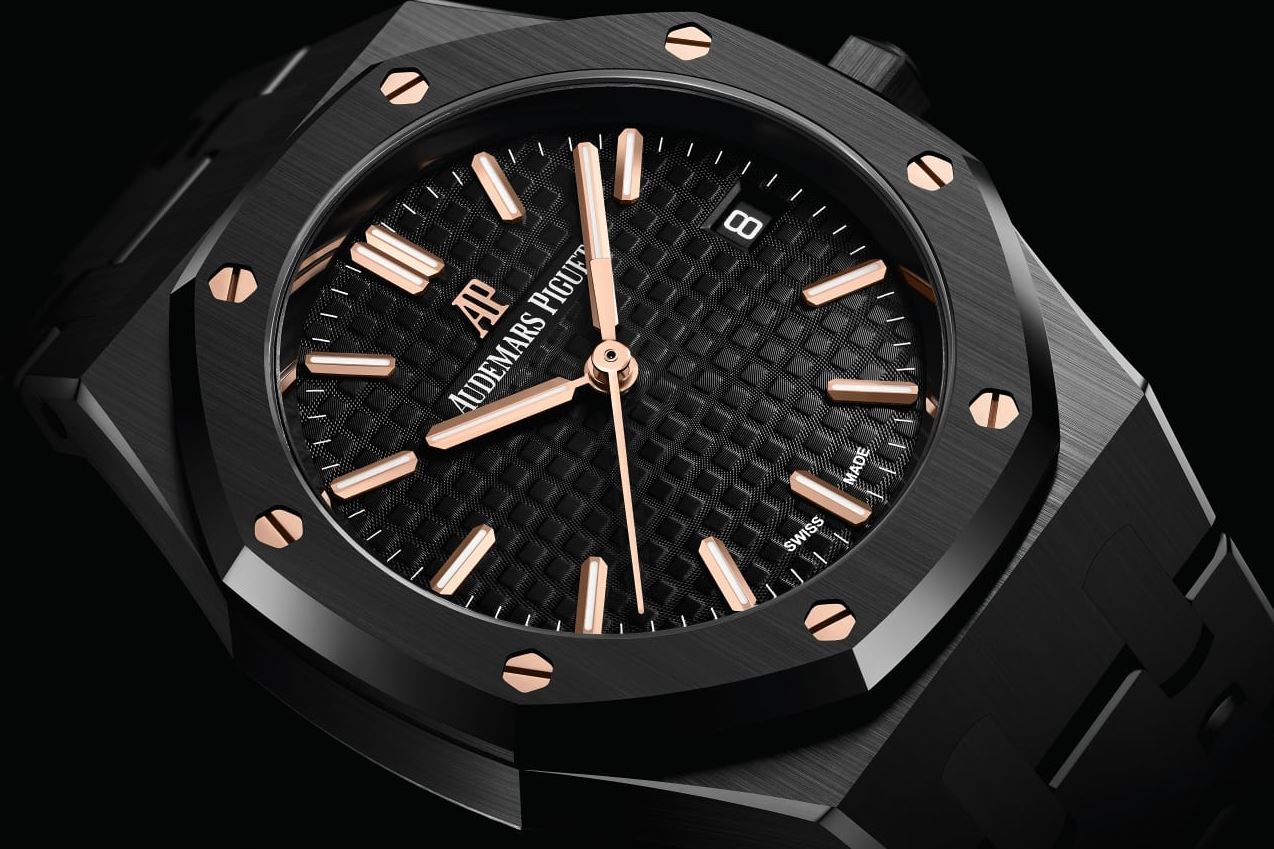 To round of the week, we have a whole slew of Audemars Piguet (AP) Royal Oaks, just in 34mm. For starters, I have always been intrigued by the newer 34mm addition to AP’s Royal Oak line-up because of how it added a far dressier (while still automatic) option to this iconic series. The fact that the current design gives it a larger wrist presence than its dimensions suggests makes it an ideal option for many with smaller wrists, such as myself. And now, AP has added 4 new options at this size. There are two standouts, for very different reasons. The first, a fully ceramic version with rose gold hands, indices and screws which carries a dark brooding charm that is extremely exciting. The second, a frosted white gold piece that comes with a light blue patisserie dial. This piece is to me, the embodiment of the elegance of the 34mm Royal Oak line-up with its light elegant air about it. The other 2 additions are interesting too, if a bit more ostentatious. Both feature openworked dials with rainbow set bezels. There is also a additional 38mm Royal Oak Chronograph that comes in rose gold and features a luxurious royal purple dial and a 32-baguette cut amethyst set bezel. Overall, an interesting series of additions to the Royal Oak line-up that sees the brand diversifying the collection further from the usual big bold options. 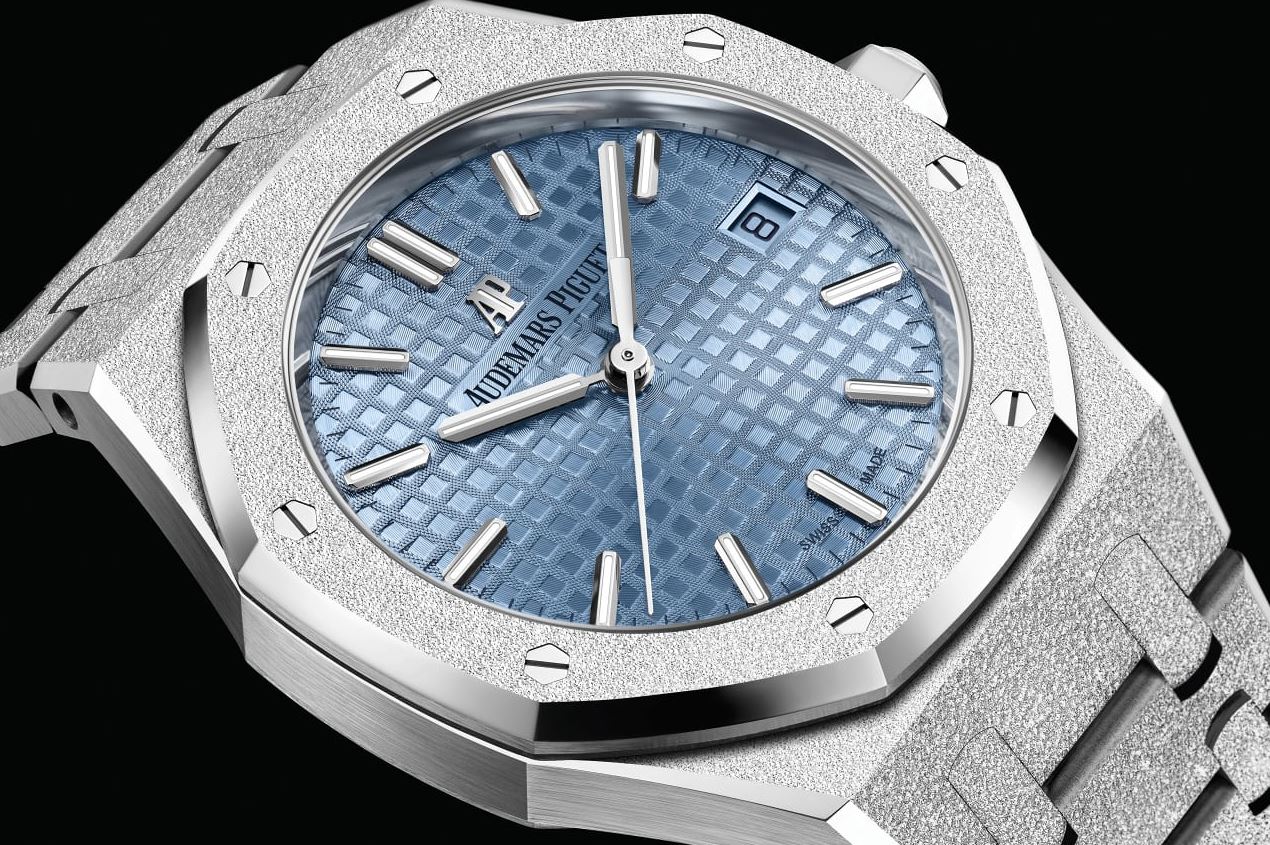 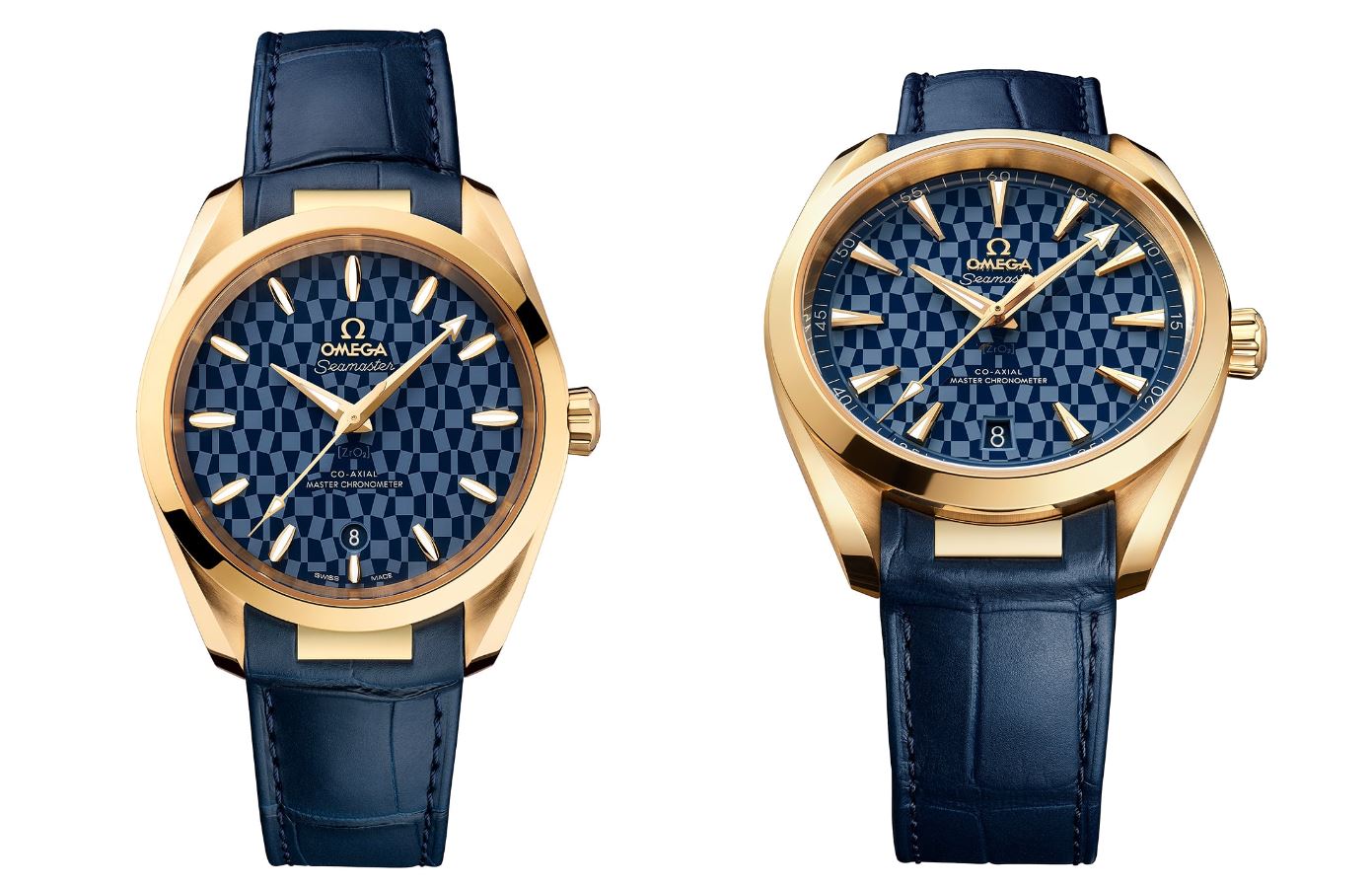 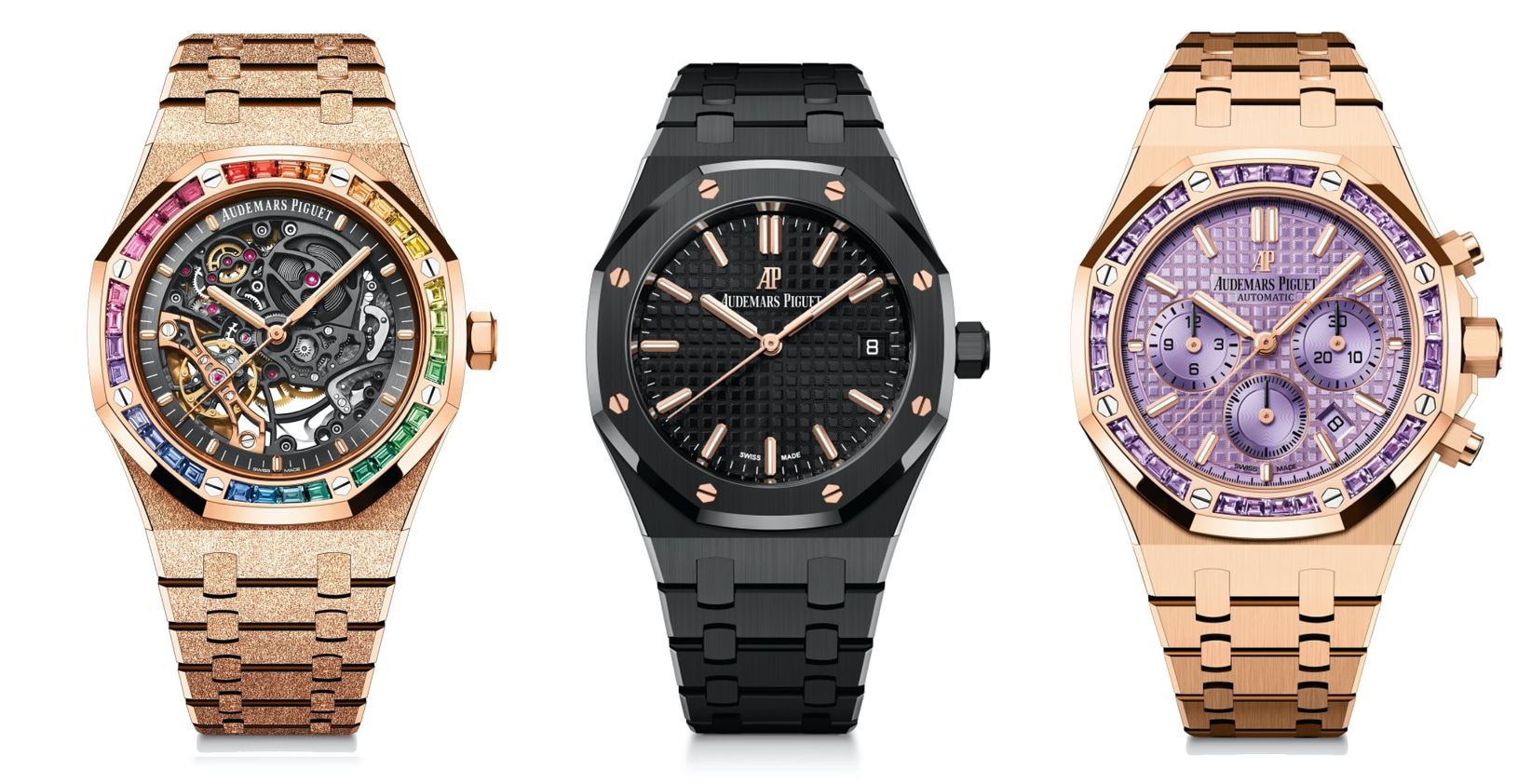 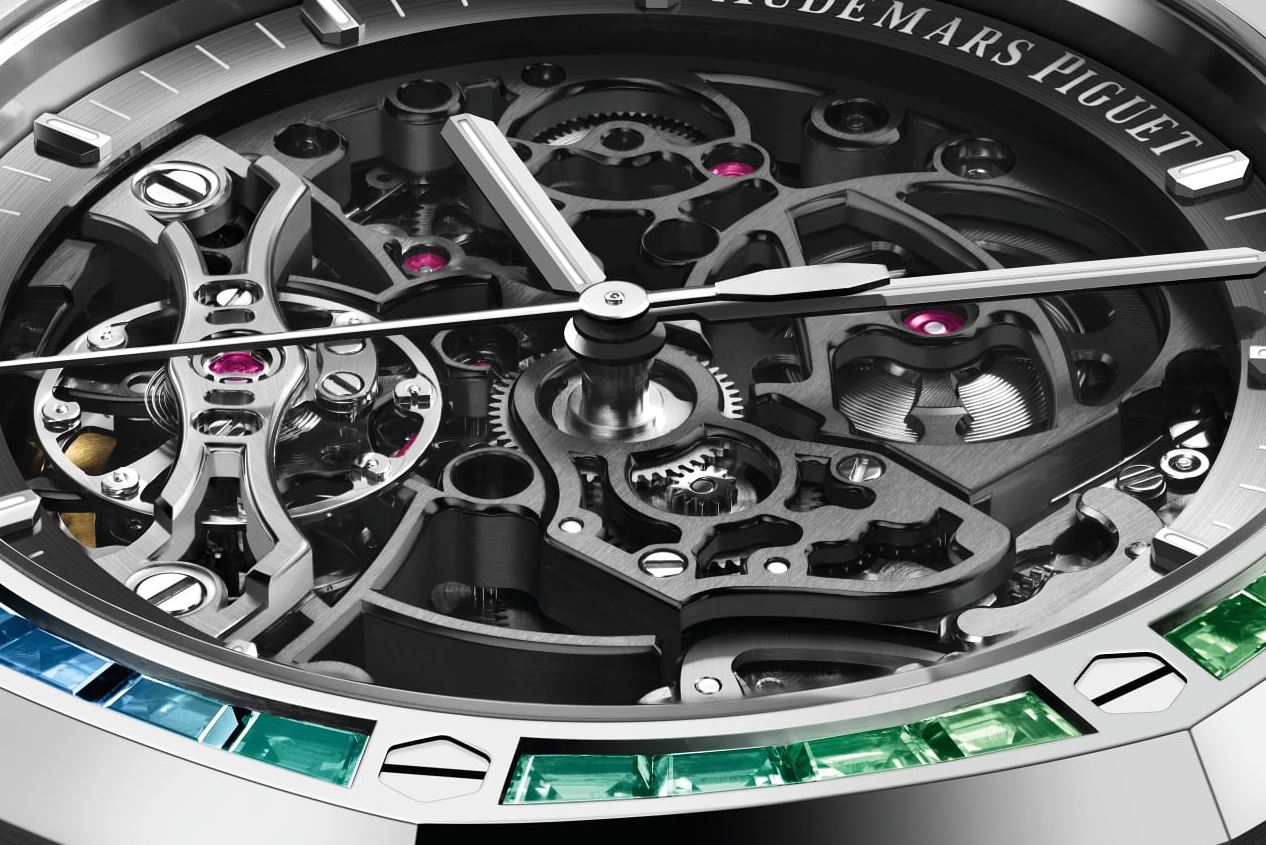