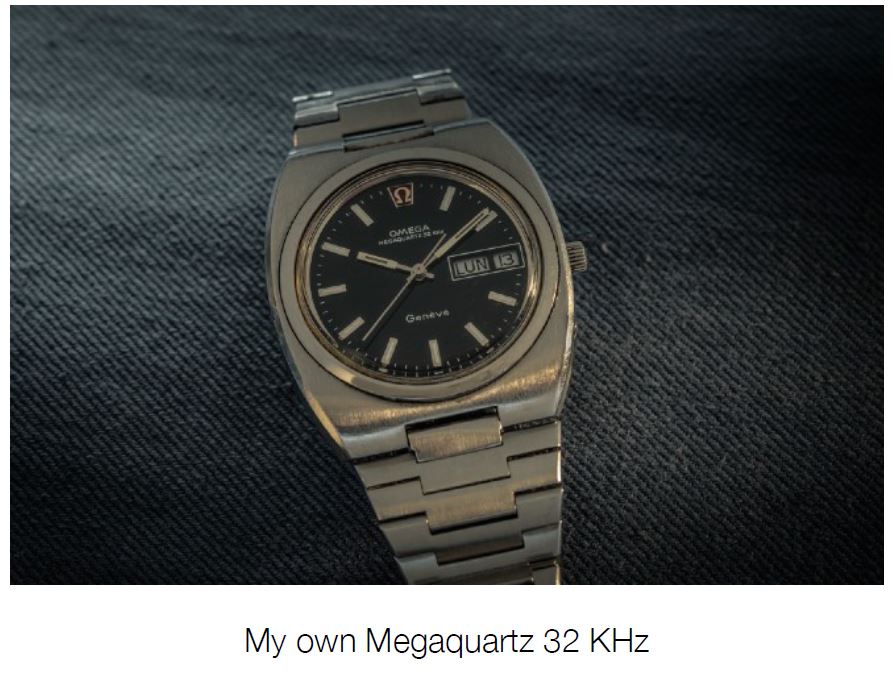 If watch collectors are nothing else they’re snobs, things just need to be right. The right bezel, right dial and the right movement. It’s what makes the watch collector an interesting animal, that attention to detail, everything in it’s right place. There was one line that could not be crossed, the movement. Quartz was considered a no go zone, this isn’t real horology. Taking a quartz watch to a meet up would have been like a bacon sandwich at a bar mitzvah, that’s not good. You turn up to Soho House for the meet up, full of excitement, climb the stairs to the little backroom. There you are, a group of collectors, sleeves rolled up, Tourbillions, Minute Repeaters and a bevy of 5711s crossed over the Negronis….Slowly you roll your sleeve down, and leave the room, your quartz hidden from view, you WhatsApp later, ‘sorry, couldn’t make it, something came up’ 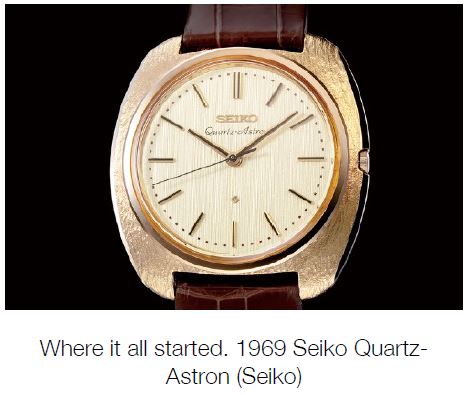 But things have changed. Partly because of the very people that started it all, Seiko. Christmas morning 1969, while the world was waking up to their presents of Beano annuals and Oranges, things were not so cheery in the Vallée de Joux, clouds were gathering. Seiko had launched the first quartz watch on the market, the Astron. In a beautiful gold case and running at a chronometer    smashing +/- 5 second per month and an (at the time) eye watering ¥450,000, this was a special piece. As the technology became easier to mass producer the Swiss watch industry was thrown in crisis, as we now call it The Quartz Crisis. I’m going to say (this will get me some haters) it was only a crisis from one point of view. For millions of people they had access to a reliable and accurate watch for the first time and the ‘crisis’ gave the people of the far east safe, clean jobs. It was a boom. The Swiss did try and catch up (more later) and in the long term the demand for mechanical watches is still strong (I know you know) It was this ‘crisis’ that helped raise the mechanical watch as something special, you buy one to last forever, quartz watches cheap and nasty. But as I said things have changed and it is Seiko that have done this, their fantastic 9F quartz watches have must all look at quartz differently, now you can stay for that Negroni, or two.

Now there is an interest in quartz and collectors are starting to look some of the stunning vintage pieces out there. The super cool Rolex Oysterquartz and the funky Beta 21 Pateks with their Swiss cheese bracelets. These are highly collectable and going up and up in value (why didn’t I buy an Oysterquartz a few years back, why!?!?) The high end Swiss produced quartz watches into the early 1980s, during a period that saw some of the most innovative designs. There is one brand that sticks out to me, one that produced some real classics of that Swiss quartz era, Omega. 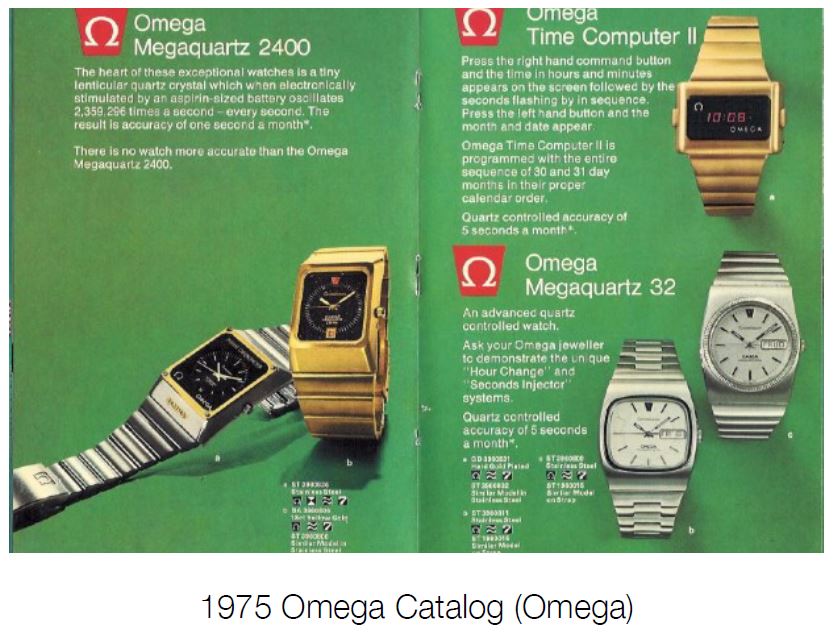 The late 1960s and 1970s were an incredible time for Omega, they were producing watches that were so of their time. The Dynamic, Chronostop, Flightmaster and Memomatic are all classic of their generation, they ooze cool, you’d jump into your Lancia, pollo neck on and head to the rivera (or Southend) on the wrist, an Omega. Quartz wasn’t Omega’s first electric watches, they started  with f300 Turning Fork watches, which is a pretty amazing mid-century tech worth checking out, have a look at the great Electric Watches website. The first Omega quartz watches hit the market was the Electroquartz f 8192 Hz, using the Cal 1300 movement, Omega’s Beta 21 watch. There came in some Sci-FI style cases, with their sweeping second hand they are definitely like something from Star Trek (when the future looks like the past) Beta 21 movement being third party and expensive to produce (they also used batteries faster than a 70s house wife…. I know, I’ve let myself down)

Basel World 1973 Omega brought us Omega’s 1310 movement, the first fully developed in-house. Running at 32 Khz, this gave Omega the chance to produce a whole range of quartz watches under the Megaquatz banner, from Geneva, Seamaster and Constellation, at the time these were top of the range and highly priced. As many 1970s watches did they blurred the lines between sports and luxury, with integrated brackets and unusual case shapes, watch styles that are so hot now. At the time they were also the height of fashion, A ford Capri pulls up outside a Soho pubs in 1974, out steps an opened shirted cad, on the wrist a Gold Capped Megaquatz, they are that cool (yeah, I love cars and watch comparisons) The 1310 like most quartz watches since uses a module to step the second, that ‘Tick’ that we recognise as a quartz watch (look up dead beat Rolex watches, it will surprise you) this saved battery life greatly, giving a power reserve of a year….. These were true luxury watches of their time. Just open the case back of a Megaquatz watch and a cheap quartz of the time and you’ll see the difference, yes the finish is industrial, a third of it the battery, it has the look of a top of the range Hi-Fi of the era. The 1310 movement had some great features, an independent control for the hour hand, a button to advance the second hand a second a time for precise setting, not any quartz watch. 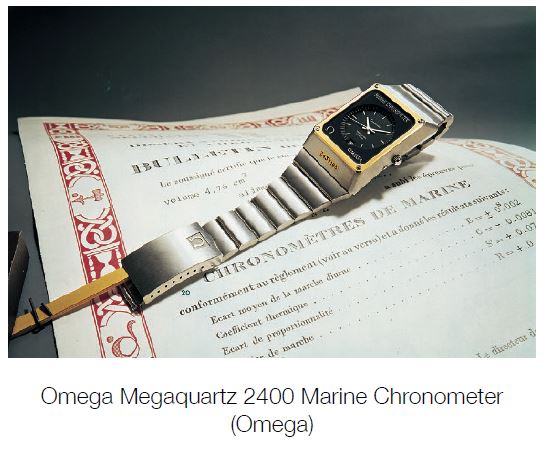 The preeminent Omega quartz from the era was the Megaquartz 2400 Marine Chronometer, still one of most accurate watches ever made and still the only quartz Certified Marine Chronometer. The 1511 movement had the same independent hour hand (to change timezone and let the seconds still tick) and the second hand advance and accurate to one second a month. This was possible because of the 2.4 MHz vibrations of the moment. It is as revolutionary now as it was in 1974 on its release. For me this is a grail of the Omega 1970s watches, quartz or not, it is simply an amazing watch, sure in the sausage party of vintage Rolex you’ll be made to feel second place, but you’ll know better. Sadly (not if you manage to get a great example) they only had a run from ’74-’78 disappearing as quartz had it’s biggest impact on the Swiss watch market. 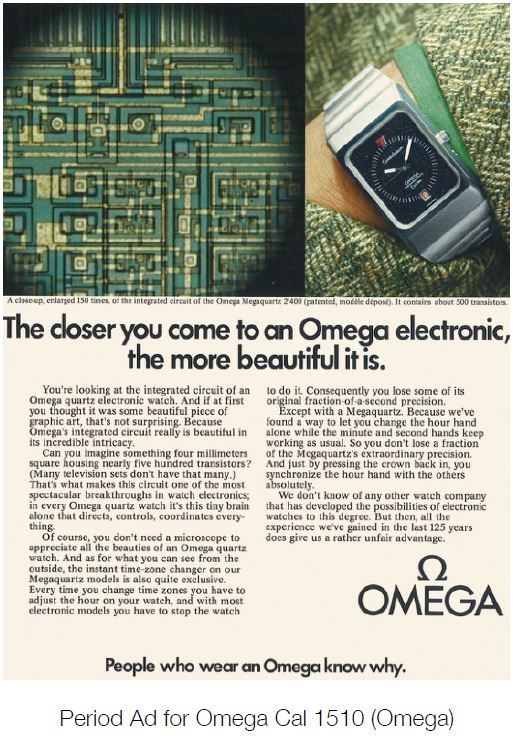 It is a great shame that Omega, Rolex and Patek through in the towel so soon on quality quartz watches, I guess the numbers just didn’t work. But if you’re tempted to own something from this era you’d better get in fast, prices are shooting up as interest for quartz grows, my own Megaquartz 32 Khz only cost £500 a few years back, now a lovely one is nearer £1500, the Rolex Oysterquartz in a good example around £5000. Do look out for them and personally I’d buy one from a respected dealer, as so many are ‘mucked about with’ A great resource on Omega from this (and all) periods is Old-Omega period catalogs and instruction manuals, I could (and do) look at it for hours.