The second album is always tricky, we’ve seen it time and again. A band blasts onto the scene with a vibe and a sound that is both fresh and edgy. They and we think this is it, the next U2 or Coldplay, but when the buzz of this new phenom quietens down the real task begins, to keep the magic going. For every Rolling Stones, there are dozens, maybe hundreds of bands such as The Killers who exploded with their Debut Hot Fuss, for many of us Mr Brightside was an anthem of a special time, however, they could not replicate the success and so their star diminished. 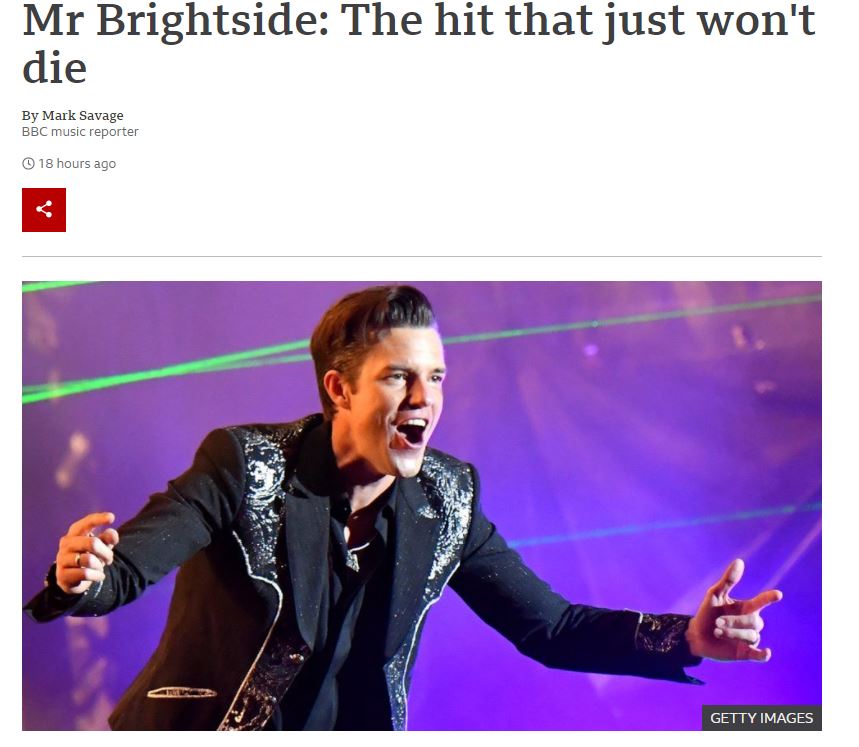 Fledging watch brands face the same dilemma. Inspired individuals put their heart, soul and creative juices into bringing a watch to reality in the hope it captures the imagination of the community. Such was the case with Batavi Watches of Amsterdam. They bravely brought their first watch to Kickstarter at the start of the first wave of the 2020 pandemic. For the Kosmopoliet GMT to get fully funded in such an uncertain time is a testament to not only its design and use of colour but also Batavi’s slick campaign. This successful project may have given encouragement to many a brand hoping to navigate such testing times.

Roll forward a year and Batavi are back with their second offer, The Architect. We were delighted to get an extended hands on run with it to see if they have another hit on their hands. 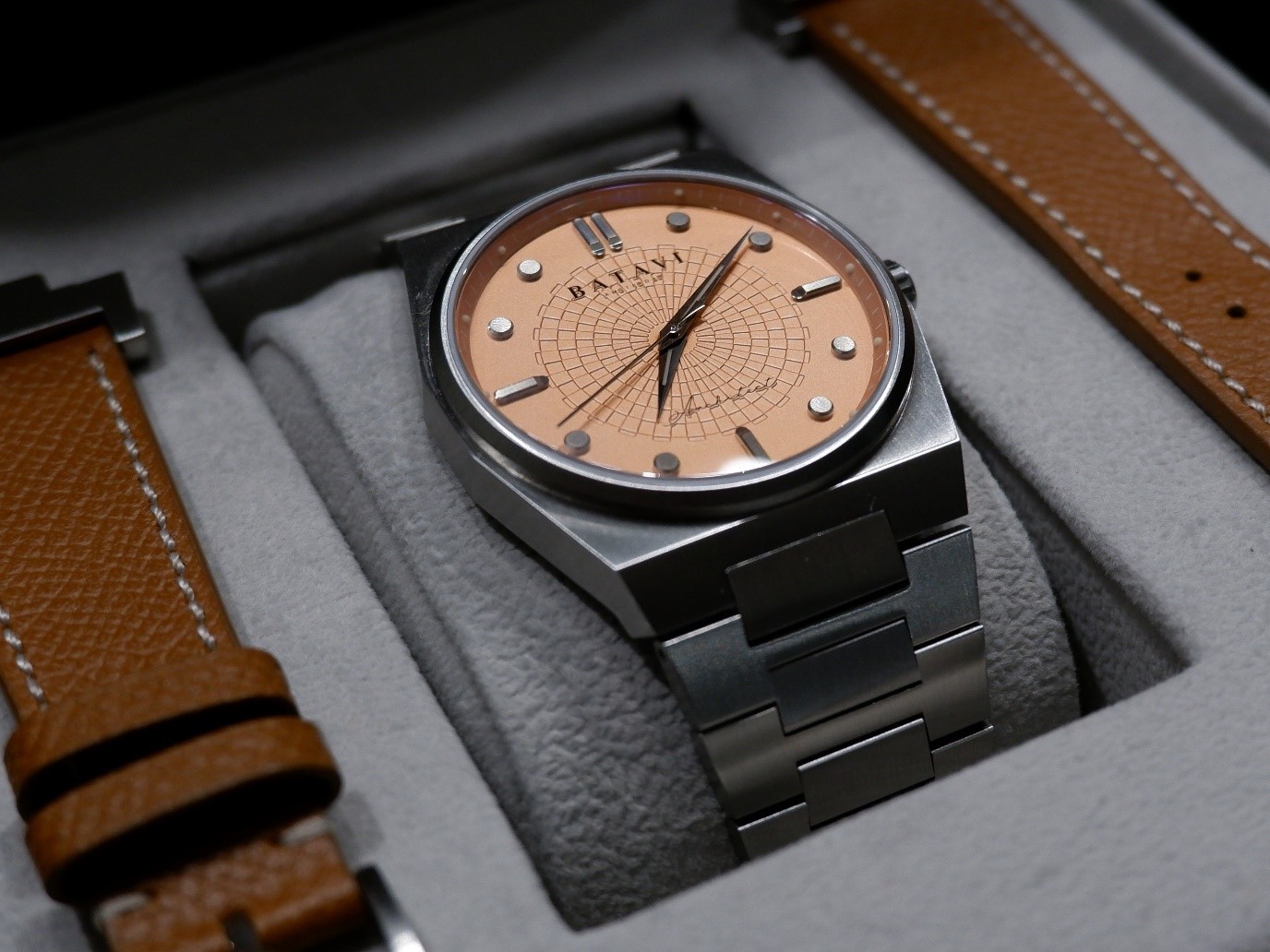 The Architect ships in a very nicely finished lacquered wood box, the unboxing effect is very dramatic and in keeping with watch cost multiple times more. On opening and being greeted by the watch you can instantly tell this is a very different offering from the Kosmopoliet. It would have been easy to assume the follow up would be a diver of sorts, but Batavi bucked the trend to bring a seventies inspired integrated bracelet sports watch for their second offering.

It is worth noting at the time of publication here have been a number of integrated bracelet watches teased for release this year. Having been in contact with Batavi from the time of their previous release we know the Architect has been in the planning from before we have got wind of these other offerings. It could be said the Batavi didn’t so much jump on a bandwagon than made an astute judgement on the way the market was moving. 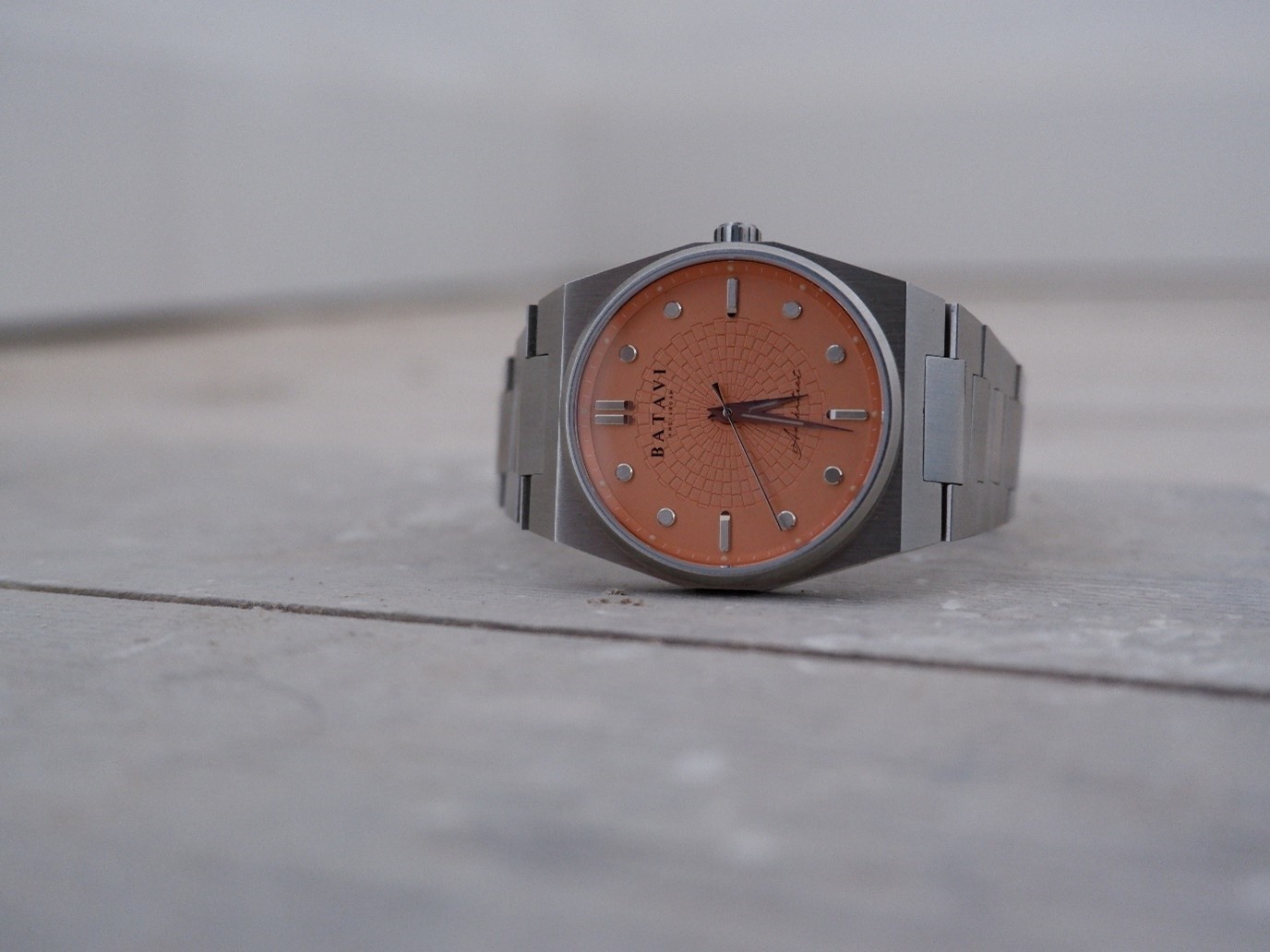 The Architect comes in an angular almost industrially brutish 39 x 47mm stainless steel case. Being brushed in almost its entirety allows you to appreciate those sharp lines and angles, the most pronounced of which are the ones at the upper and lower ends, reaching to the lugs.  The case itself is in fact octagonal with short side to accommodate the slightly recessed crown; stamped with Batavi logo. Yes, the case is aggressive and industrial but also contemporary allowing the light to catch its different facets nicely. The overall effect does not feel like a watch gaining inspiration from a bygone era, something more forward looking. Fitting its sport watch aesthetic, the watch has 100m of water resistance. 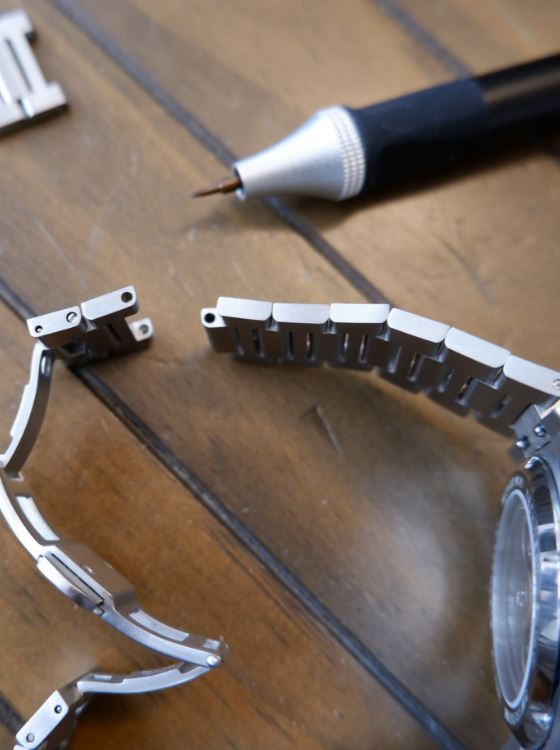 The stark nature of the case finds a tonic in the dial offerings. The Architect will be offered in three dial variants, a deep blue, a copper with and a brown walnut (yes with actual walnut wood). Each of the three bring different textures, the blue variant is flat representing steel, the walnut features vertical striping, what we have is the copper dome version. This particular version evokes imagery of ancient structures such as Rome’s pantheon with the stamped central detailing. The hue of this copper almost salmon dial is soft and is a perfect counter for the angular case. Applied on the dial are steel batons at 12, 3, 6 and 9 o’clock positions, which are dimpled on the inner side, again providing a surface light to play with, the remainder of the hour markers are rounded; none of which contain lume. Lume is however contained on the dauphine hands, which suit the style of the watch. The dial is completed by a colour matched chapter ring on the rehaut, complete with C3 super luminova lume plots at the five minute marks, this adds to the amount of dial ‘real-estate’. Despite such a discrete amount of lume it does a respectable job. The dial is protected by a double domed sapphire crystal with antireflective coating on the underside. 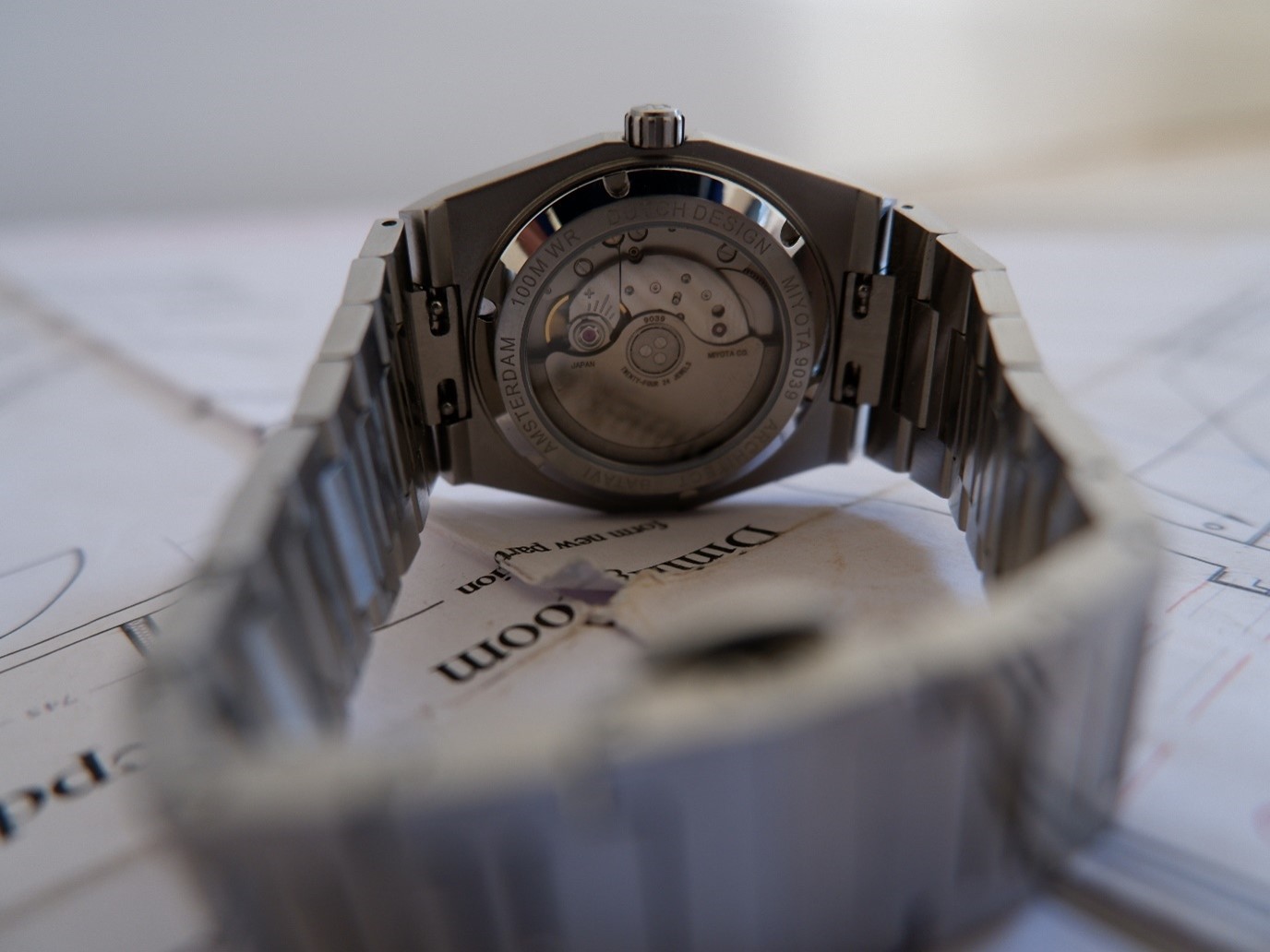 Inside the Architect Batavi chose the Miyota 9039 movement. Miyota has firmly established itself as a great option for boutique brands. This dateless version ensures no ghost notch when deplying the crown. The 9039 should get you 42 hours of power reserve with an accuracy within -10/+30 seconds/day. Its certainly not a bad movement to look at and can be viewed through the exhibition caseback.

Complimenting the case is the flat H link bracelet. The endlink is relatively fixed and therefore adds around four millimetres to the overall length, thankfully those aggressively angled lugs mean the bracelet still fits nicely. Those flat outer surfaces catch the light in a dynamic way and make the bracelet an eye catching prospect. Despite the flat outer, the inner surface of the links are rounded for comfort. As a welcome addition the bracelet has quick release pins for ease of swapping straps. Of course, we know the challenge of fitting straps on to integrated bracelet watches. Batavi have a simple yet clever work around, as a stretch goal, adapters will be included in the package allowing the owner to use their favourite 20mm straps. The distal endlinks are screwed as you would hope for to make sizing easy. The bracelet is finished by a butterfly clasp, with two push pins and the Batavi logo

It is clear this is an attractive watch, but how does that industrial case work on the wrist? A quick word about integrated bracelet designs, usually they wear bigger than their specs suggest. This is also true of the Architect which wears closer to 40/41mm. Thanks to those aggressively angled lugs the watch drapes the wrist better than you would first imagine. The Architect also has another trick up its sleeve, a thickness of 10.6mm, this svelte profile hugely aids wearability. As much as I appreciated the bracelet, I really loved how this watch wore when on a leather strap using those adapters. Both these latter points mean the Architect wears superbly allowing day long comfort. 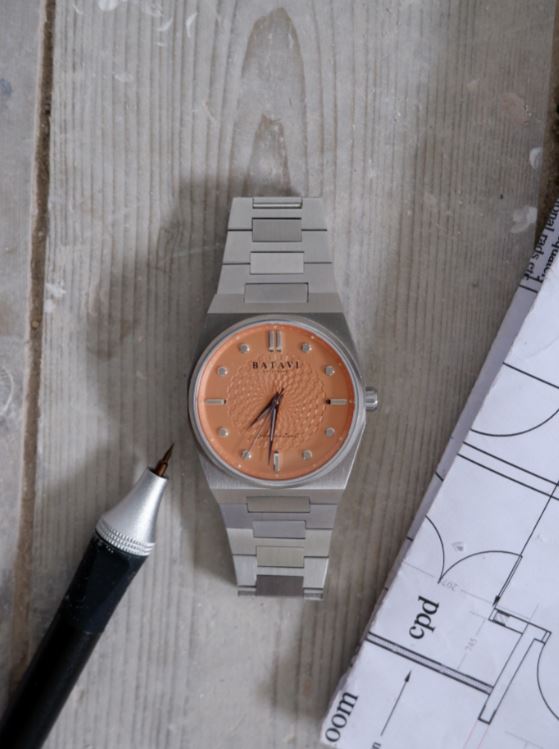 It’s clear Batavi didn’t take the easy route for its second release. The Architect is a bold watch which makes an equally bold statement. The stark, aggressive case is balanced by nicely by the details of the copper tone dial. The potential addition of adapters add a great dimension, not often seen in watches of this style.

So, does Batavi have a another success on its hands? In my opinion yes. The boutique/independent sphere is full of watches that follow a (successful) template. To break out of that takes an amount of guts, the resulting Architect is a striking watch which I would argue also has enough to set it apart from the other integrated bracelet offerings which will come.

I have perhaps left the best part until last. The Architect launches on Kickstarter on 2nd April with a starting price of €349, which is an astounding deal all things considered and therefore very likely give the brand that elusive second hit.

Find out more at www.batavi-watches.com. 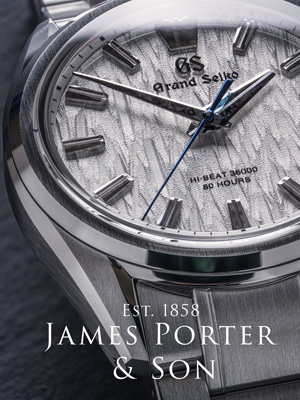