It’s becoming more and more common these days, for brands who have the luxury, to dip into their archives for inspiration when coming out with new watches. And who can blame them? With modern tastes skewing more and more towards a throwback aesthetic, they would be fiscally foolish not to do so, at least a little bit. While most brands seem to be reaching back to the ‘60s or even before, like Longines with their Heritage collection and relaunched divers from Doxa and Aquastar, some are reaching into the less distant past of the ‘70s and ’80s for inspiration. France’s Yema falls into both categories across their catalog, but the LED watch we are discussing today falls firmly in the 1970s camp. 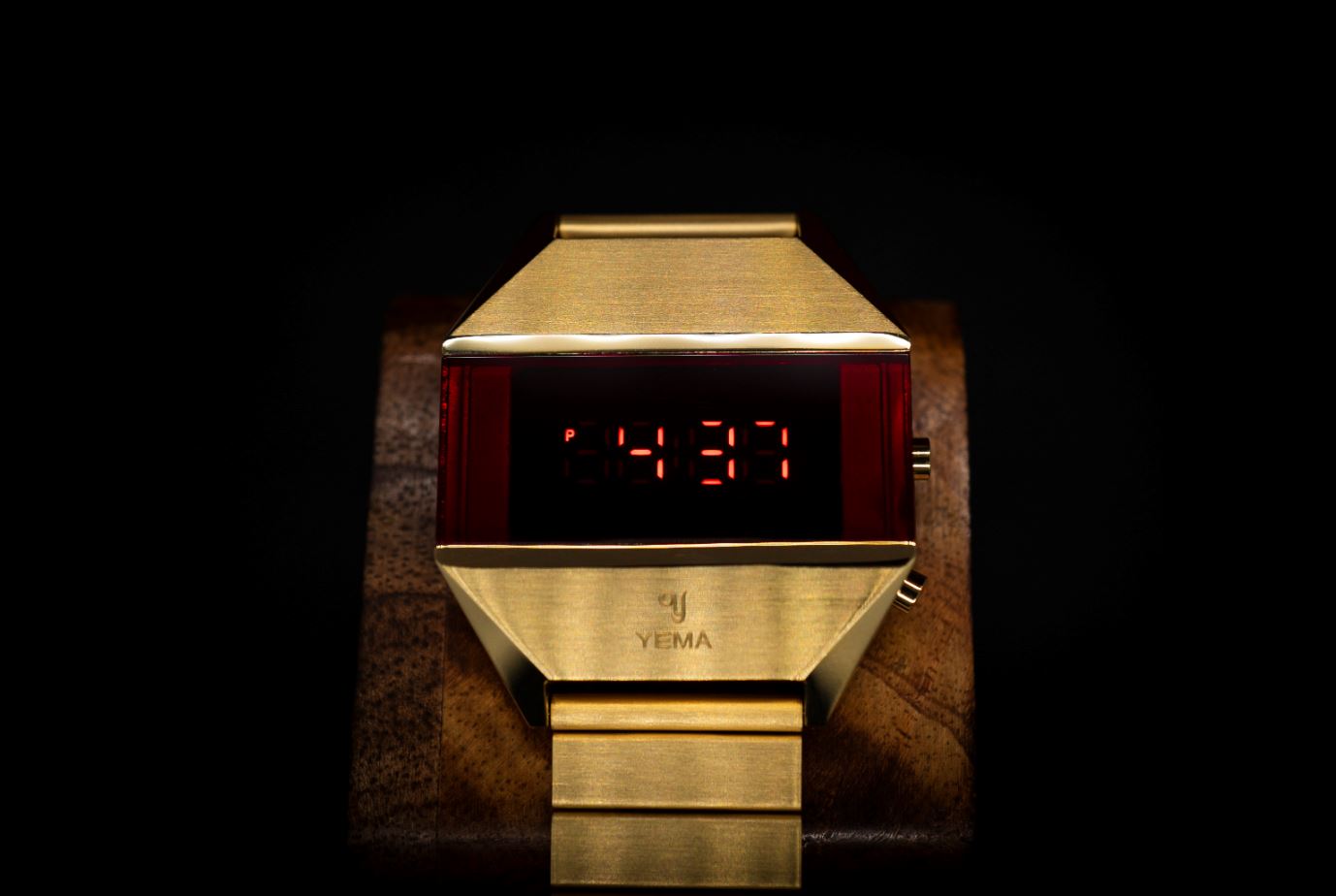 Yema was founded in 1948 by Henry Louis Belmont. Within 15 years they had become one of the biggest watch brands in France, claiming everything from the first French watch in space, to the first watch to make the 800km solo trip across the North Pole, to being Mario Andretti’s chronograph of choice in his F1 days. A pretty impressive CV, to say the least.

By the 1970s the dark cloud of the quartz crisis was looming large. Yema, like nearly every other mechanical watchmaker, was forced to rethink their business plan to try to compete with this new, affordable and highly accurate technology. One of the ways they did that was by releasing a line of LED-display digital watches. However successful these may or may not have been has been lost to the sands of time, but now they’re back in a new, retro-futuristic form factor. 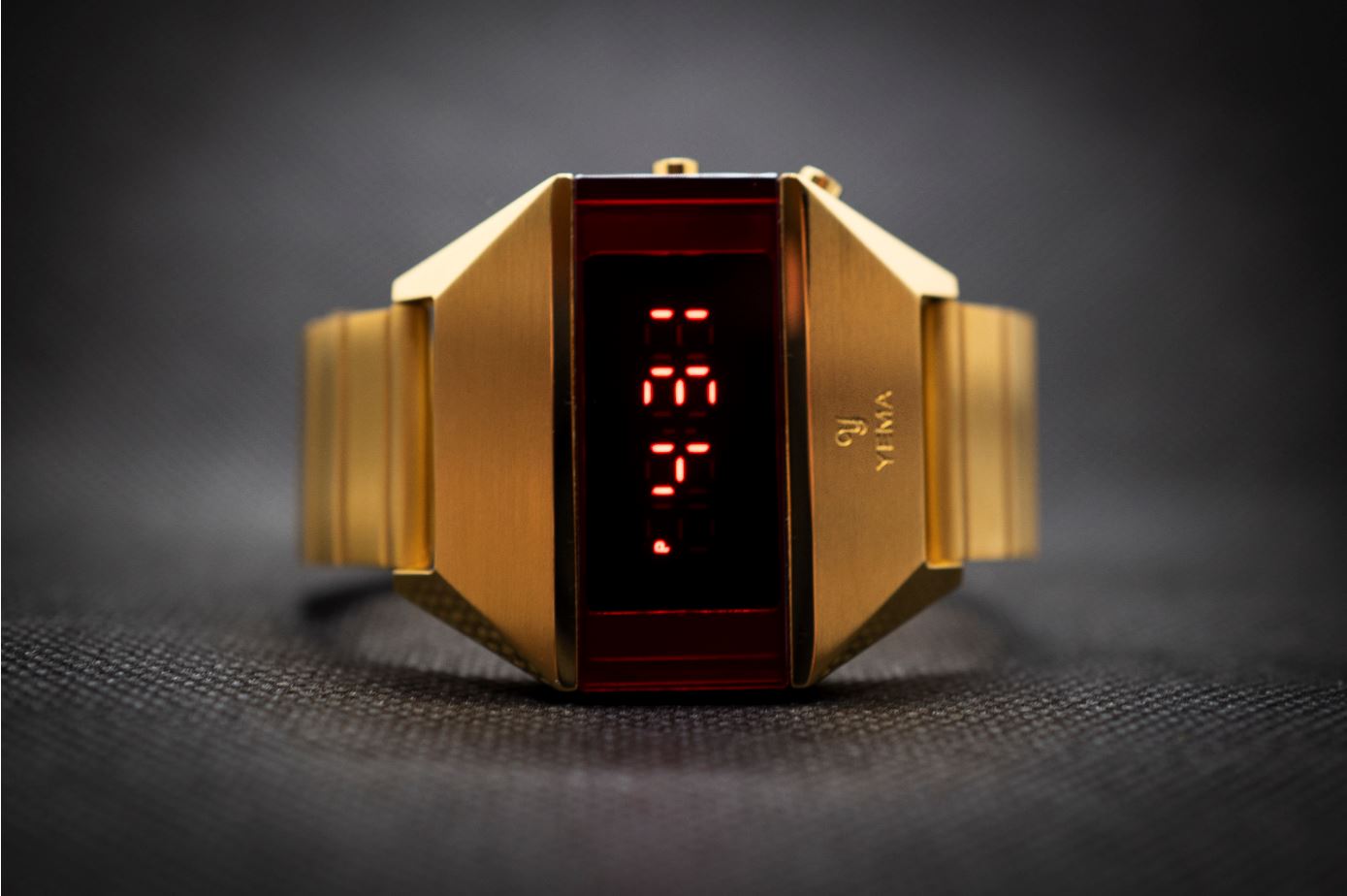 Checking in at 37.5mm with a lug-to-lug of 42.5mm, this gold-toned stainless steel beauty is nearly square, and only 10.5mm thick, resulting in a very wearable and comfortable fit on my diminutive 6.25” wrist. Weighing 113g, this guy has a lot more heft and wrist presence than your average digital watch, feeling more akin to the all-steel G_SHOCKs I have tried out in the past. The hue of rose gold is deep and rich and doesn’t look at all cheap or painted on like some other faux gold watches can. A stainless steel, screw-down caseback gives it a very respectable water resistance of 330 feet. The single red acrylic crystal that stretches the entire length of the case will bring to mind Cylons or Robocop or 2001: Space Odyssey or Flight of the Navigator, depending on the particular angle of your sci-fi leanings. Especially when the LED comes to life. 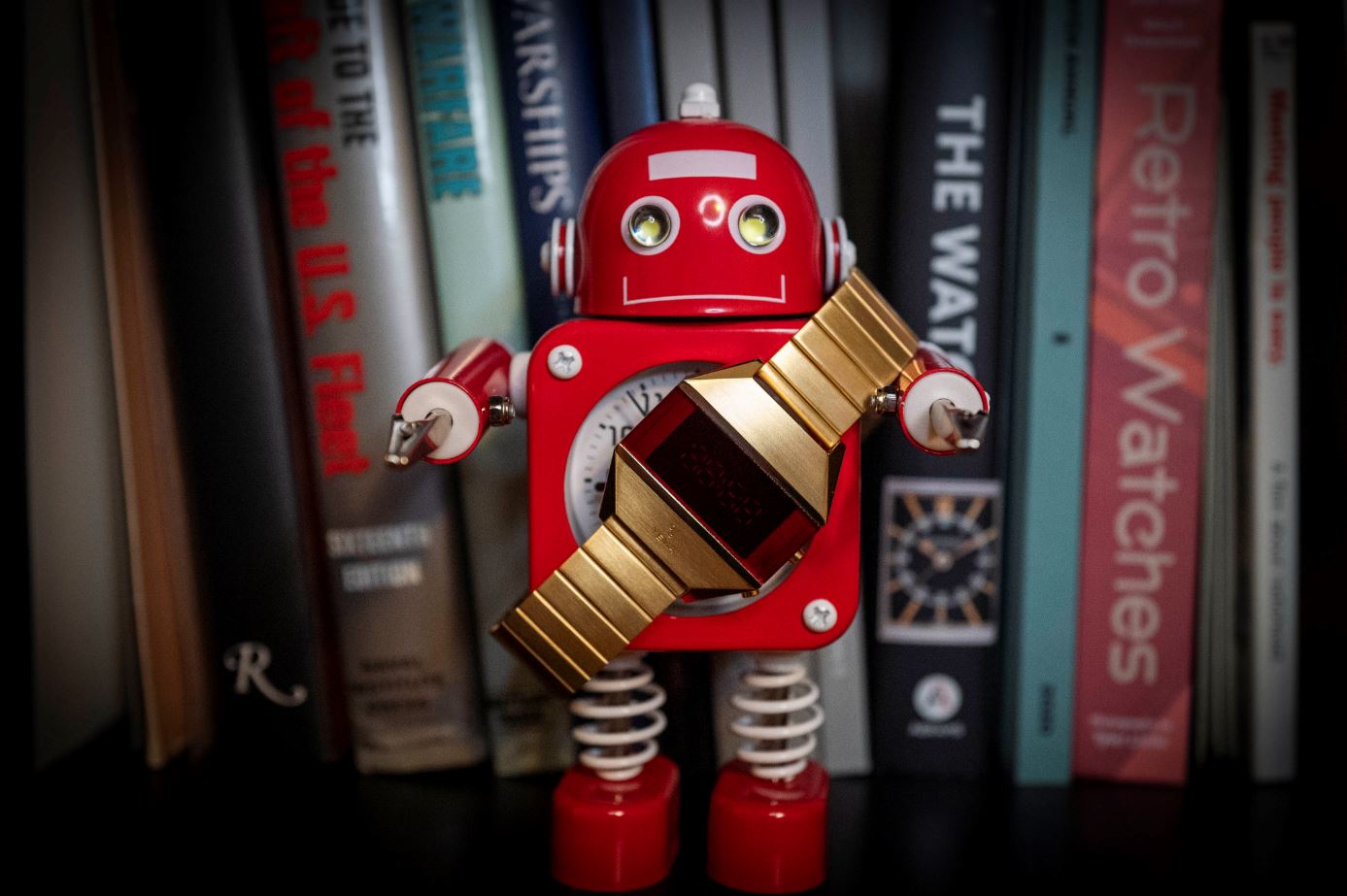 And when illuminated is when this watch really shines, so to speak. At the press of the button at 3 o’clock, the vibrant, electric red digits look borderline distorted, as though the circuits are just slightly overloaded, maybe 103%. I realize that might not make any sense from an electrical engineering standpoint, but it is my best description. Powered by a proprietary LED Quartz movement, the laser light show lasts about two seconds, just long enough to marvel, process the information you have come for, and move on. A second button press reveals the date in mm/dd format, and a third reveals a second counter. The lower button at 4 o’clock is dedicated to all setting duties.

While the red LED display is certainly the main event and a huge draw of this watch for me, it also leads to my only real complaint about this piece: requiring a button press to display the time is not ideal for daily wear situations. As evidenced by the latest generation of Apple Watches, with their always-on displays, being able to just glance at the time without making a big show of it is a benefit of analog watches that we all take for granted.

It might sound like a nitpicky complaint, but in practice it becomes more and more of an issue as the days go by and has become a bit of a bee in my bonnet. I’m sure that it’s a battery saving feature, as the burning brightness of the LEDs constantly on would surely kill the battery in short order, but I would have preferred the route that Hamilton took with their recent PSR LED watches, where the time is always visible and the button just makes the digits glow. Considering these watches come in at less than half the cost of the Hamiltons though, this is a pretty small complaint. And who knows, maybe having the digits visible at all times would take away from the tiny surprise party bit of excitement you get every time you press that button. 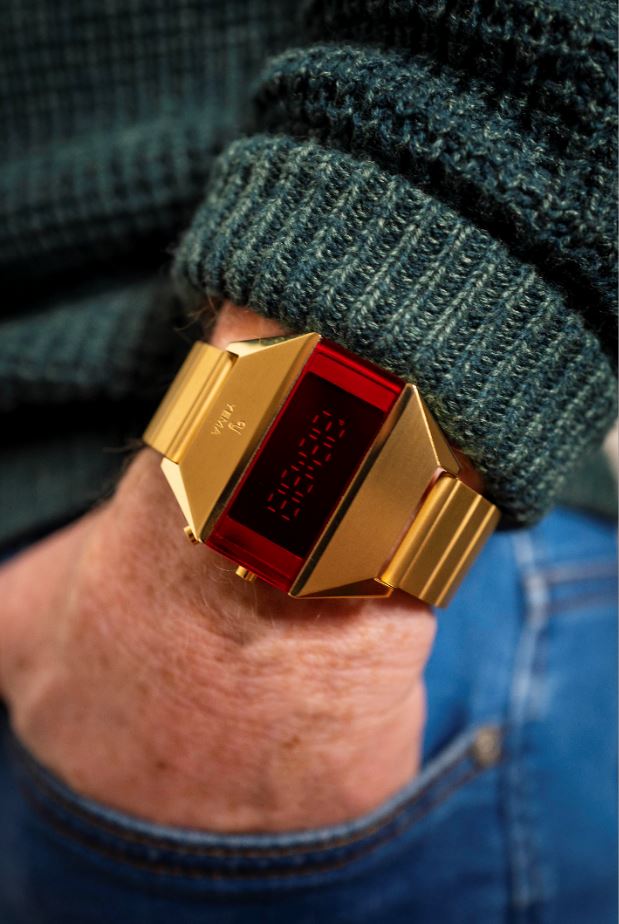 The Yema LED comes on a chunky-feeling bracelet that perfectly matches the case and features a self-adjustable clasp closure, with Yema’s logo engraved. The lug width is a standard 20mm so one could easily customize the look here and though I didn’t try it, I imagine it would look very good and interesting on a number of different strap options. I’m imagining a worn brown leather or black rubber, and I like what I see in my head. 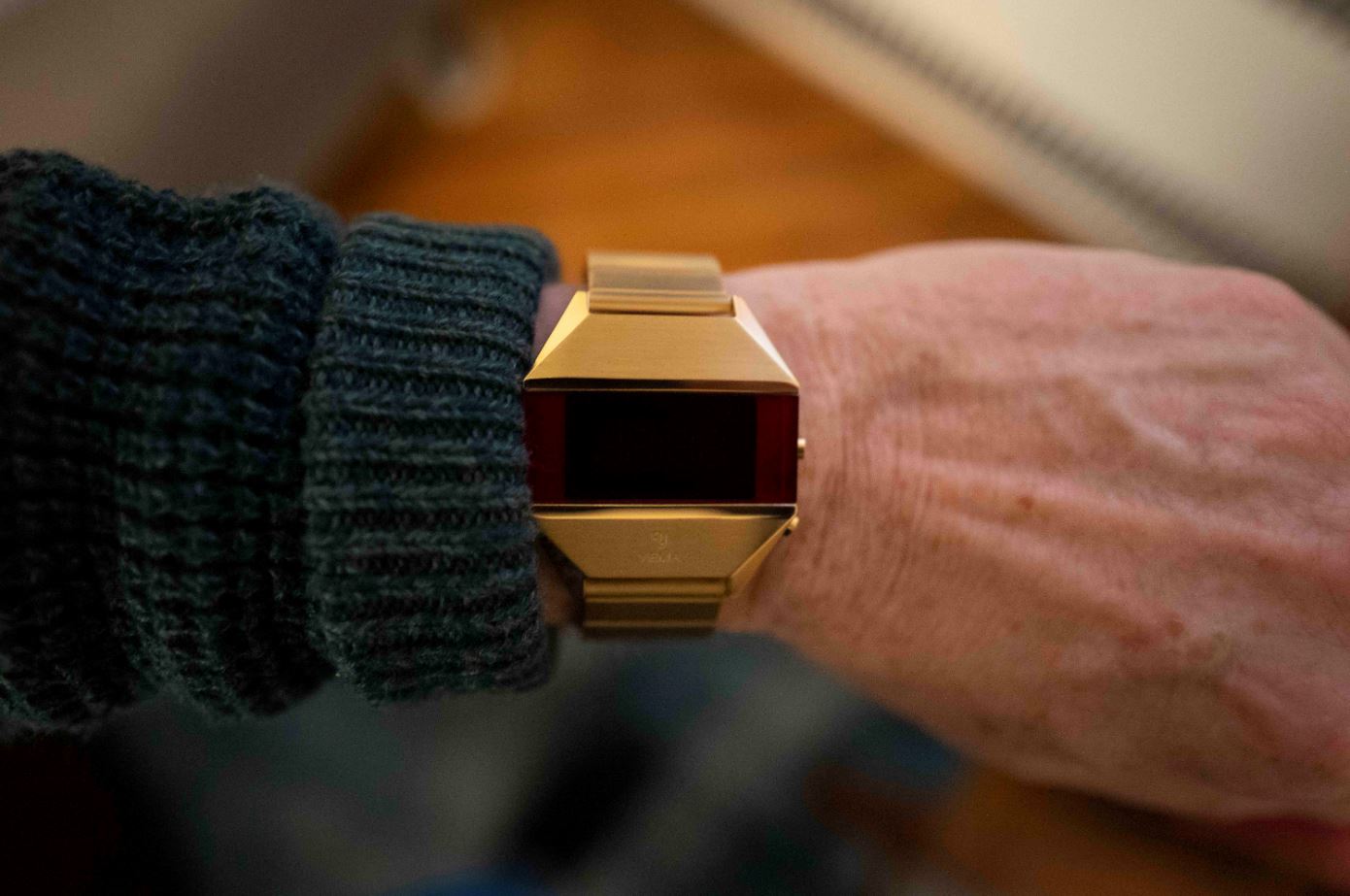 All things considered, this is a really interesting, vintage tribute release from Yema. While it would definitely fall into the “novelty” category of most watch collections, its throwback meets vintage meets luxury meets futuristic vibes are a welcome change from the day-to-day mundanity of boring old analog watches. The future’s so bright, I gotta wear shades.

Available now for $279 or $249 for the silver-colored version. YEMA