As a serial enthusiast of all things aesthetic, I’ve experienced the collector’s bug from one impassioned focus to another.  Having collections (and mini-collections) of all types (vintage cameras, whiskey, ukuleles, and on and on…and on) has helped me to see overlap between things that might not be immediately recognizable to the non-obsessive.  Maybe that’s precisely why I have so many running collections of different types, because there are so many interesting ways to look at how different types of design intersect.  My Instagram feed is dedicated to two such genres of collecting, watches and records (:insert cheap plug: or, as you might say, @dials_and_vinyl).   These two particular types of artifacts seem to share certain characteristics of design sensibility.  Rather than looking at these historically (an album with a watch from the same year or era), I thought I would take the more arbitrary route of looking at both watches and records purely as objects d’art, that is, looking at the actual things themselves and what connects them in terms of mood, vibe, feels, whatever the hell you want to call it. 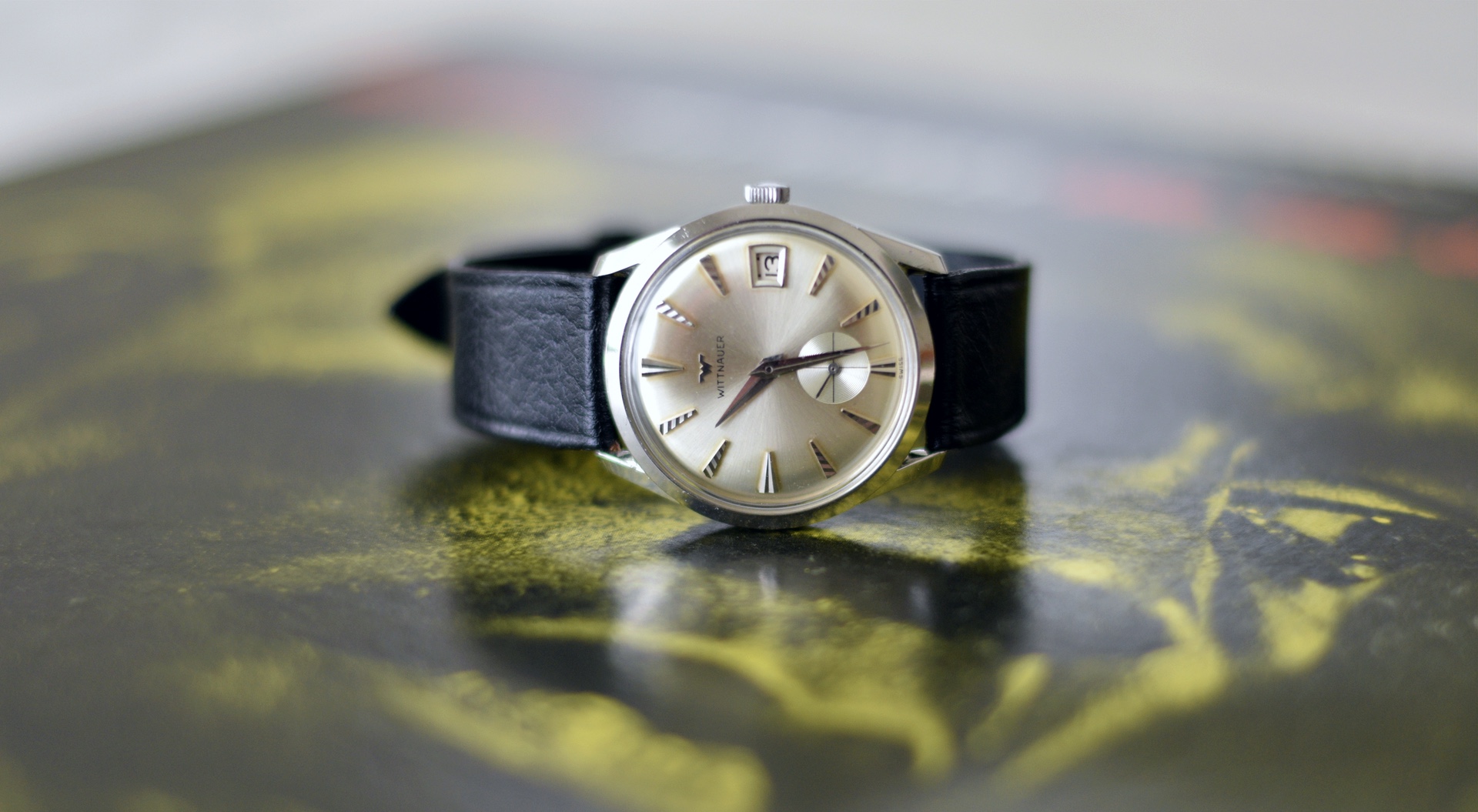 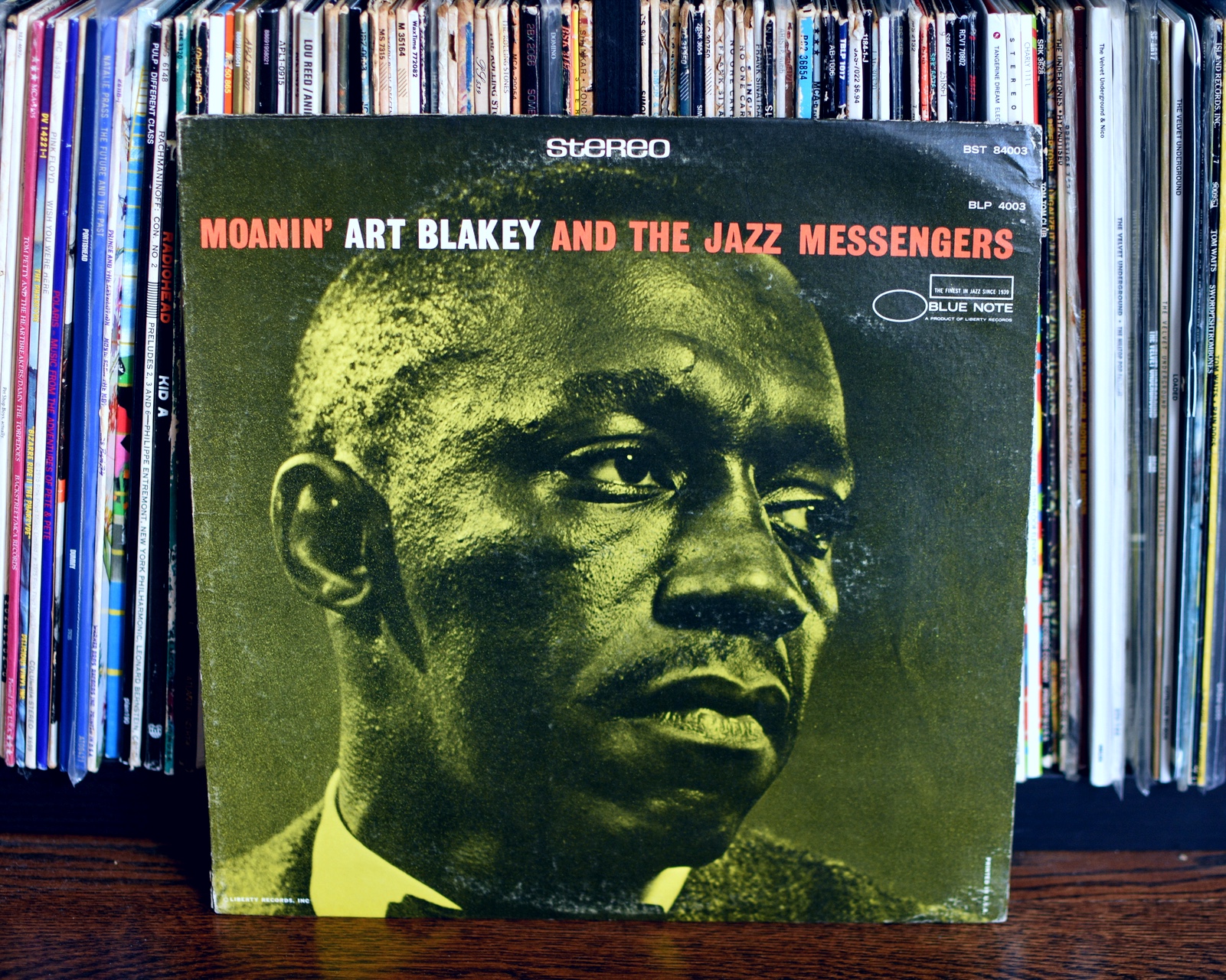 The Album: Moanin’ by Art Blakey and the Jazz Messengers

Every time I throw on my 60’s Longines-Wittnauer 6500, I think about jazz.  Everything about it is late night, hip, and musical.  The champagne sunburst dial reflects pure, smooth class.  But then that dial is disrupted by wild, barber-pole striped indices whose self-assured absurdity runs mad like an improvised sax solo.  Finally, there are the sharp, steely, dauphine hands and sleek applied logo which reign in the avant-garde and give the watch a cooler-than-thou presence.  Hell, the sub-seconds register even looks like a damn snare drum.

There’s no album that could be the soundtrack to this watch more than Art Blakey’s Moanin’.  The cover of the version I own shows the man himself giving a steely yet laid back glance to the side as if nothing could faze him.  The monochromatic pallet, which gives off that same late night vibe, is interrupted only by the hot red and cool white text across the top of the sleeve.  The Blue Note logo gives off much the same feeling as the Wittnauer “W.”

What’s ironic is that Oris recently released an Art Blakey-inspired watch where the dial and indices are actually supposed to resemble a drum.  But that’s what’s cool about the Wittnauer and about Art Blakey.  Neither are trying to be anything else.  They’ve got their own thing running and that’s jazz, man. 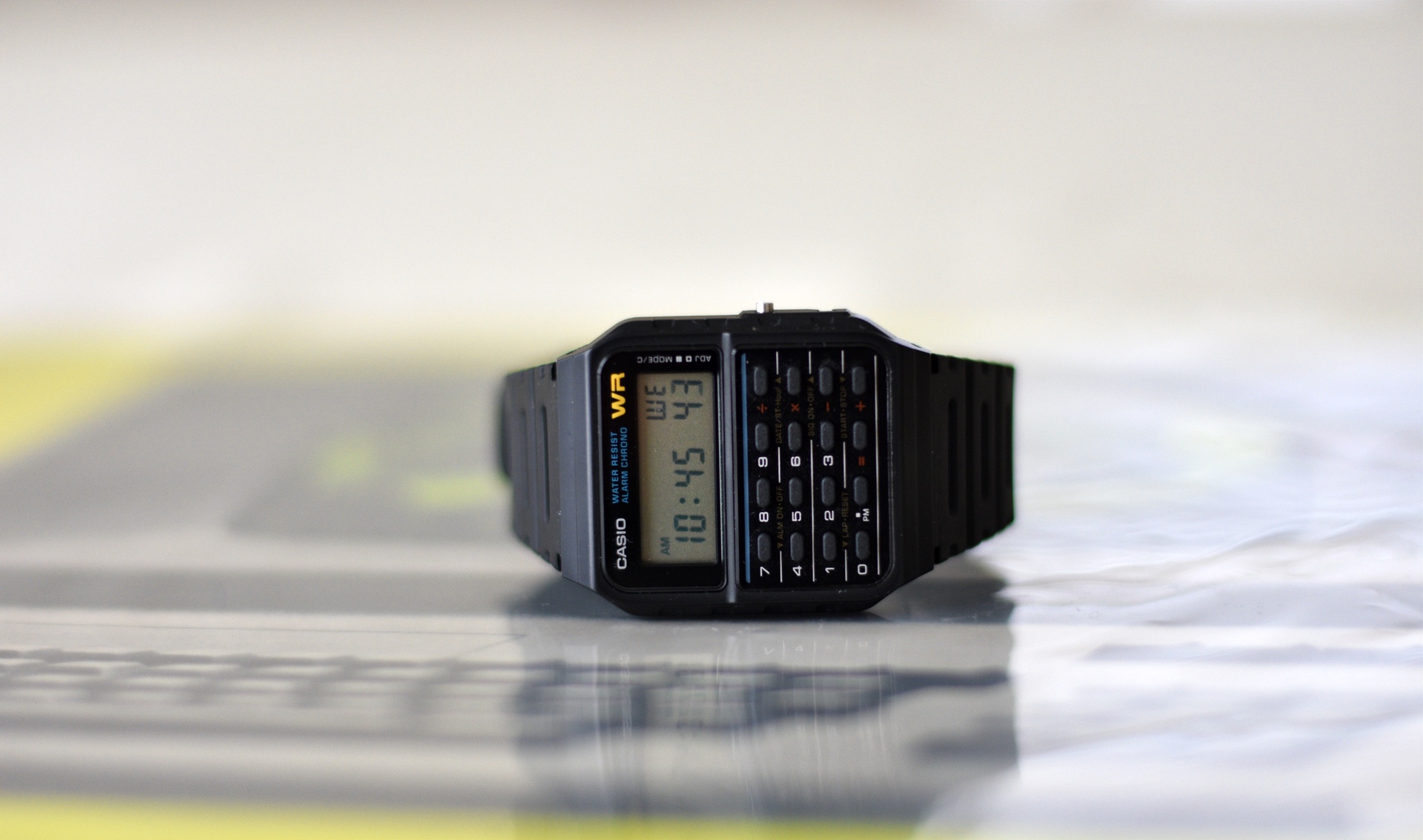 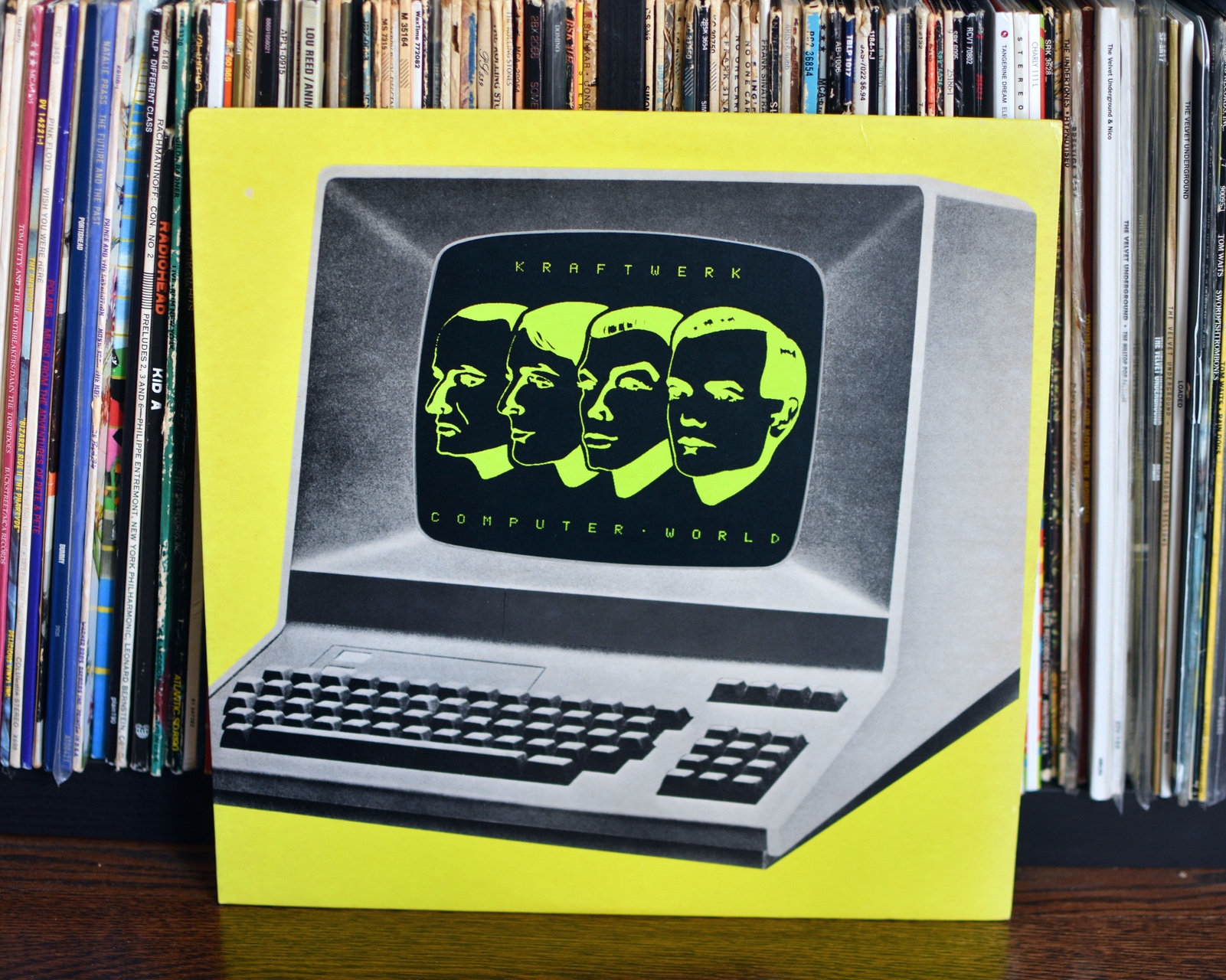 The Album: Computer World by Kraftwerk

On Computer World, the German electronic group Kraftwerk (German for “power plant”) interpret a world where computers and technology are not to be feared but embraced.  In the second track, “Pocket Calculator,” Ralf Hütter proudly (I guess, though it’s hard to hear pride in a robotic voice) exclaims “I’m the operator/With my pocket calculator!” and later, “I am adding/And subtracting/I’m controlling/And composing!”  This reverence for the computer age is evident not just in the cover image (the four members of the group immortalized in digital rendering) but the design aesthetic and color choice of the record sleeve itself.  The cover is modern and industrial, a black and white machine containing the image of our heroes in computer green on a chartreuse/yellow backdrop.  I don’t know if I have another record with a sleeve that looks anything like this.

The only watch in my box that can match the “high tech,” “modern,” optimism (I use quotes since, ironically, both the album and the watch are charmingly dated in their aesthetic) is the Casio CA53W-1.  When I think Casio, this is the watch that comes to mind.  Sure, there’s the World Time (got one), the A158 (got one of those, too), and the Data Bank (damn, don’t got one).  However, the watch that always screams Casio (which, in my mind is equal to “high tech,” “modern,” and optimistic) is the black calculator on resin strap.  While Computer World sums up the feeling of a particular point in time before you even hear a note, you know what you’re getting with the CA53W-1 before you even put it on.  Though its tech is dated, it’s still functional and dependable.  It’s retro and modern all at once.  It even has beeps and bloops that would fit right into any track on Computer World. 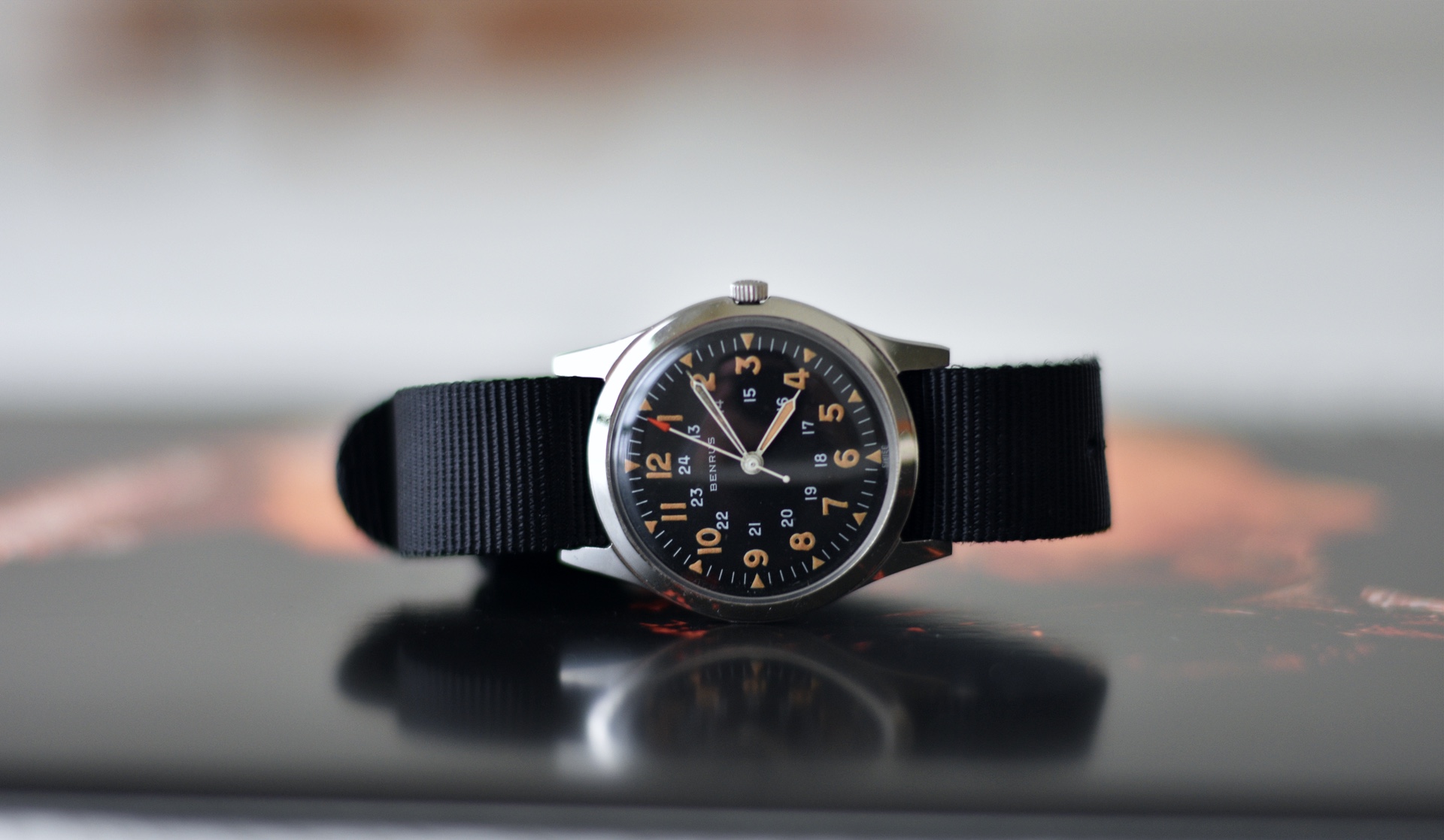 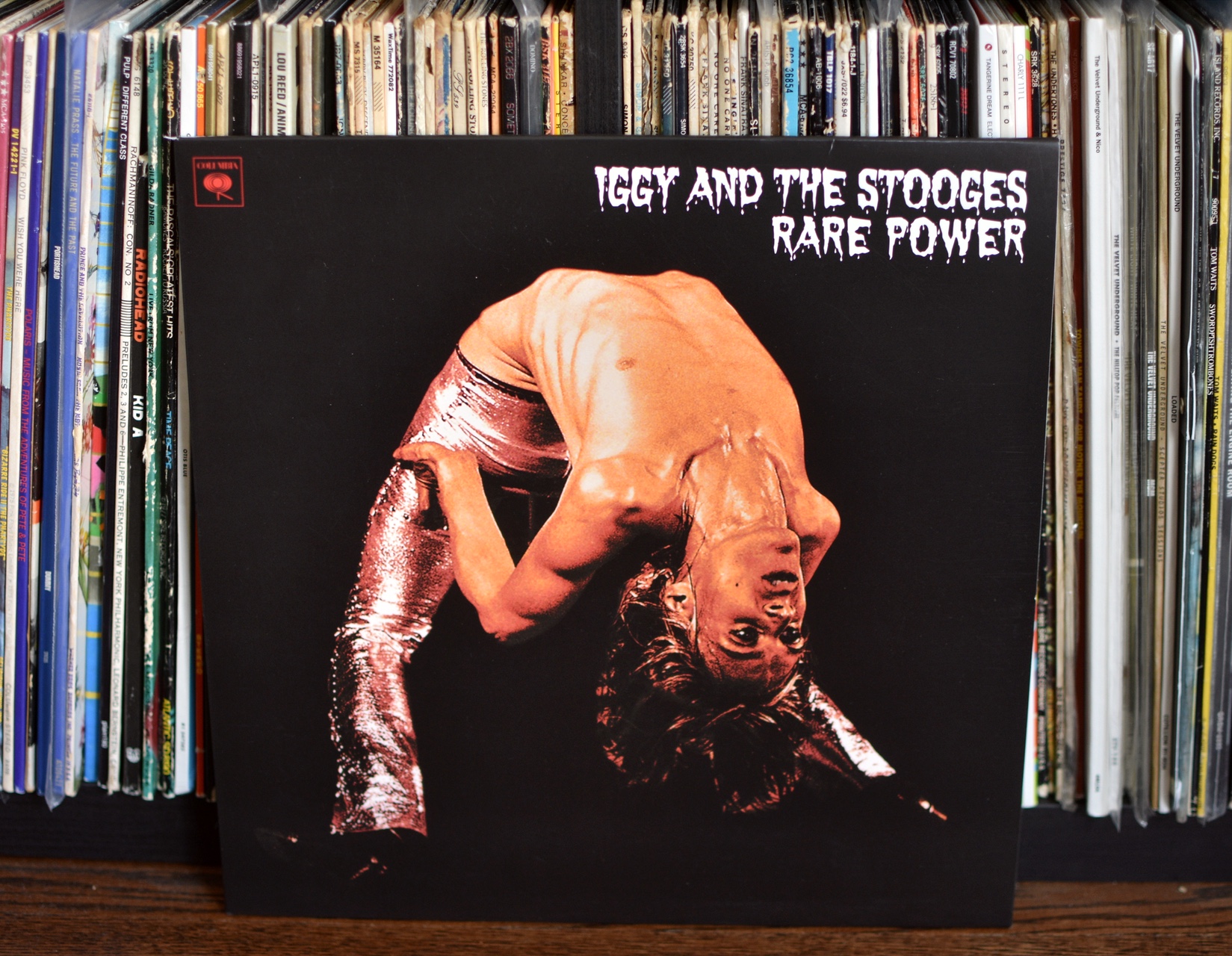 The Album: Rare Power by Iggy and the Stooges

Benrus has a history of iconic military watches, some of which were issued to soldiers during the Vietnam era.  I feel like the Benrus military watch, with its sterile, no-nonsense 24-hour dial, sturdy lumed hands, and matte, rugged, parkerized case, is the essence of raw power.  Perhaps that’s why Detroit proto-punk band The Stooges decided to name their album Raw Power, because they (most clearly articulated by their front man, Iggy Pop), like the military Benrus, are emblematic of that same ethos: rugged, raw, no bullshit.

Well, I’ll tell you what I do have.  What I have is an even rarer version of the Benrus military: a little less rugged, a little less raw, and only the coolest bullshit.  My Benrus is the 3061, also known as the “Bullitt” because of its theorized appearance on the wrist of the King of Cool, Steve McQueen, in the 1968 film Bullitt.  The “Bullitt” Benrus shares the same DNA with the military-issued pieces, though it swaps its parkerized case for a high-polish one, its sterile dial for one with the Benrus brand, and its matching, lumed second hand for a red-tipped one.  Basically, they took the aesthetic of their military watch, when military style became fashionable, and jazzed it up a bit for the consumer market.  Yeah, that’s kinda bullshit, but it’s still cool.

Much in the same vein is the album I do have on vinyl which is Rare Power, a special release for last year’s Record Store Day which collects “outtakes and alternate mixes” from the Raw Power sessions.  It’s not the run of the mill album.  It’s something rare and different, just like the 3061, a rare bird as its become in recent times.  The cover shows Iggy in the same outfit he wears on the cover of Raw Power but in a radically different pose, upside down this time.  The starkness and boldness of the black backdrop are there as are the band name and album title in a ghoulish font.  Like the “Bullitt,” this album is recognizable but just different enough to make it something special to fans.

Re-releasing tracks that were never meant to be on the album in the first place on their own, more-expensive LP.  Kinda bullshit, but still cool.