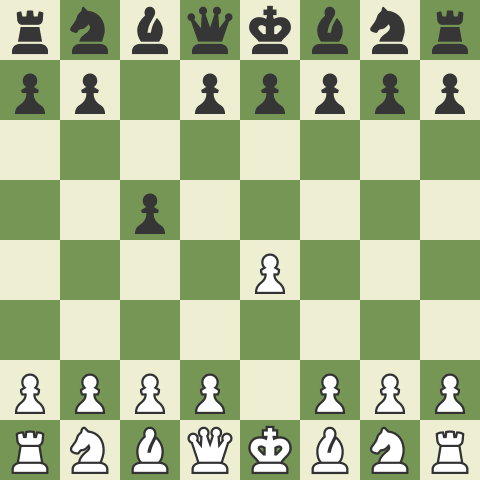 If you’re into watches, you’re probably aware of the developing story of whether or not ETA (part of Swatch Group) will cut off – or simply become much more opportunistic about – supply of movements to competitor brands. This is causing a sudden movement shortage, fueling speculation and widespread uncertainty within the industry.

Because it’s been written about at length, by myself and others, I won’t rehash it entirely, or in detail. Suffice to say that in the near term, unless and until we see more movement manufacturers stepping into the breach, and supplying the industry with more affordable mechanical movements, the uncertainty will remain, causing problems for many brands and their suppliers.

Swatch Group, in its current form, was born out of the Swiss solution to the quartz crisis, and the threat to the Swiss watch industry posed by Japan. It’s perhaps a poetic irony that Japan may now represent the best hope for many small brands…maybe. We’ll see…

Full disclosure – I’ve always admired the Japanese pursuit of perfection in all human endeavours. I like Japanese design, Japanese cars, all sorts of Japanese products and brands. I’ve long been a proponent of Japanese movements, which I’ve used extensively in watches my company has produced.

We’ve had a fantastic experience with both Seiko and Miyota (Citizen) movements, with defect rates typically just 0.1% to 0.2%. With the Chinese and Swiss movements we’ve used, the experience hasn’t been nearly as good, with much higher defect rates, despite the movements supposedly being “reliable”.

Most watch enthusiasts realize that the early Japanese investment in developing quartz movements led to the quartz crisis in Switzerland, and set Japan up to be the leader in quartz technology. But what many tend to overlook is that Japan also makes amazing mechanical movements, and have arguably contributed as much as – and possibly more than – the Swiss have to the field of horology. The Japanese just haven’t made as big a noise about it.

Prior to 2010, if you owned an entry-level watch with a Japanese movement, especially the Miyota 8215 (or one of its many sibling calibres), or a Seiko NH25 (7s25, as it was called in Seiko’s own models), it would have been easy to dismiss Japanese movements as inferior to the workhorse Swiss calibre, the ETA 2824-2.

The 8215 is…well, it’s ugly, for one thing, and has that annoying stutter in its indirectly driven second hand. It can be somewhat noisy. It hand-winds, but until recently, it didn’t hack. But, worst of all, as far as the watch Illuminati were concerned – it was dirt cheap, which is why it ended up in so many watches.

The comparably-priced NH25 was equally dubious. Like the 8215, it was non-hacking, but also non-handwinding. 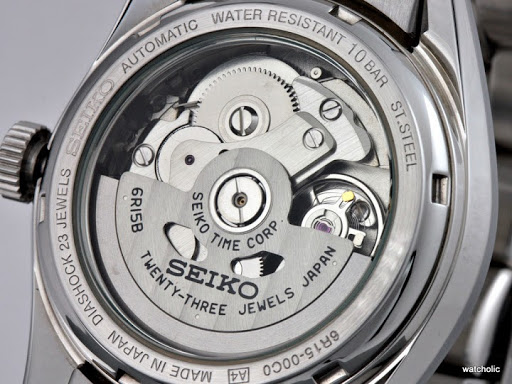 A step up from the NH25 was the Seiko NE15 (6r15), which hacks, hand-winds, has 50 hours of power reserve and seemed to be a semi-decent challenger to the ETA. Albeit, the NE15 was a bit of an underdog, as it was still low-beat, overly thick, and not amazingly accurate.

Miyota dropped a bomb in 2010, in the form of the 9015. The new calibre was superior to the ETA in every objective way, a true game-changer.

It was high-beat, hacking and hand-winding, and wafer-thin, with a longer power reserve than the ETA, and adjusted to twice as many positions than the ETA. Best of all – it was only about half the price of the ETA when it was first introduced.

On paper, the accuracy specs aren’t amazing. But having used about 5,000 of them in our watches, I can assure you those specs are extremely conservative. The 9015 is amazingly accurate, right out of the box, with low positional variance, and is nearly immune to isochronism. 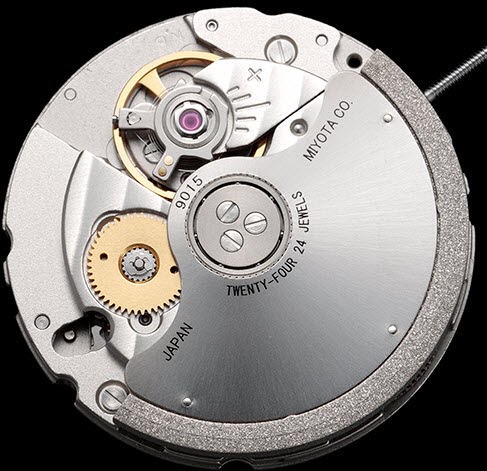 French brand Lundis Bleus recently had a 9015-based watch tested by the Observatoire de Besançon in France, where it was certified as an observatory chronometer – a standard for accuracy requiring much more rigorous testing than the Swiss COSC certification.

The 9015 is also nicely decorated if you’re into that sort of thing. What’s more, the 9015’s design is elegant – making it easy to disassemble quickly. A close examination of the 9015’s parts reveals they’re extremely well-finished – better than ETA’s parts.

Not too long after the 9015 made its debut, Seiko came back to the party with a replacement for the NH25, in the form of the hacking and hand-winding NH35 (4r35), which quickly displaced the Miyota 8215 as the independent brand’s choice in entry-level, workhorse Japanese movements.

It may not be high-beat, but the NH35’s seconds hand doesn’t stutter, and it’s not as ugly, nor as noisy as the 8215. Its parts are as well-finished as ETA’s. And whereas it isn’t as amazingly accurate as the 9015 is, dozens, maybe hundreds of YouTubers have proven it’s damned near indestructible.

With the 9015 and the NH35, Japan’s two big movement suppliers offered independent brands a powerful one-two punch of affordable, reliable, virtually maintenance-free mechanical movements. They’ve become nearly ubiquitous inside affordable microbrand watches, to the point that they’re both somewhat under-appreciated. The 8215 and NE15 have been completely relegated to redheaded stepchild status.

So…what’s the problem with ETA shrinking supply of its movements if we have the NH35 and 9015? So glad you asked…

Seiko’s and Miyota’s ability to keep up with demand seems limited, in that when we see these sudden shortages, price spikes, and longer lead times, we’ve also seen defect rates go up. It seems that when they try to increase production to meet demand, it comes at the cost of lower quality. 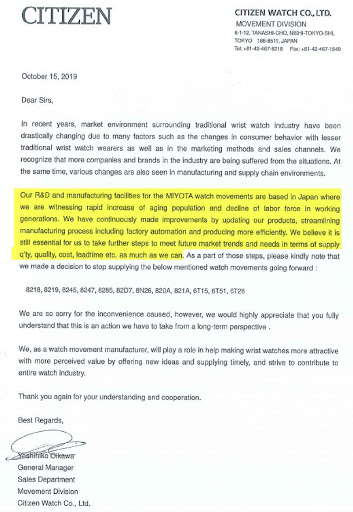 It’s not a simple matter for Seiko and Miyota to buy more machines and hire more workers in order to produce more movements. Japan is struggling with an ageing workforce and decreasing population. A recent statement from Citizen cited the issue as a contributing factor in their decision to cease production of several less popular calibres related to the 8215 and its hand-wind-only 6 series cousins.

But let’s not despair just yet. Although the statement from Miyota didn’t come out and state it explicitly, the sub-text seemed to be, “we’re cutting down on the number of calibres we produce, in order to shift our production volume towards the more popular calibres (like the 9015 and its siblings).”

Also, there are industry rumours of a long-awaited replacement for the Seiko NE15, something to compete with, if not outright beat, the Miyota 9015. While attending the Hong Kong watch fair in 2018, I asked a Seiko VP about it. He wasn’t able to divulge too many details and stopped short of confirming that it would be a 9015 killer.

But, Seiko may have already shown it to us. The new 6L35 calibre housed in the Seiko SARA015 / SJE073, aka the “Baby Snowflake”, a model priced at the top end of Seiko’s mid-range Presage line, is just what we’d hope for – high beat, thinner than the 9015, higher power reserve than the 9015, and better accuracy specs than the 9015.

Yes, the Baby Snowflake is over $2000, whereas a watch with the 9015 inside might sell for $400 to $700. But, there was a time when you couldn’t get a Seiko chronograph with the NE88 movement for less than $3,000-$5,000, and now you can find the NE88 in microbrands selling for as little as $800-$1,200. There’s precedent for Seiko selling their movements to other brands at prices low enough to allow those brands to price their watches much lower than the ones Seiko was selling prior to making the movements available.

My hope is that when Seiko unveils the available for wholesale calibre, it’ll be the 6L35, or something nearly as good, if not better. Whatever Seiko reveals, if it’s comparable to the 9015, in terms of specs, dimensions, and cost, it’ll help relieve some of the pressure on brands scrambling to source the movements needed to make their watches. Hopefully, we’ll see movement prices, lead times and quality stabilize.

None of which is to suggest that the problems stemming from Swatch Group’s actions aren’t real. Far from it. Expect watch prices to go up in the near future, partly due to the stress Swatch’s decreased supply of ETA’s is putting on independent brands and alternative movement suppliers, regardless of being from Switzerland, Japan, or China.

Additionally, the shrinking workforce in Japan likely means they’ll be forced to pay higher wages in order to attract more workers, increasing the cost of their movements even more. Perhaps the Japanese brands can make use of lower-cost labour in other parts of Asia, or import workers, in much the same way Swiss companies outsource production and import workers from other parts of Europe. But it will be some time before the additional capacity is available, and creating higher production volume, with a reliably low defect rate.

The real question is – will Seiko and Miyota recognize the opportunity, and seize upon it?

It’s no exaggeration to say that Seiko, in particular, showed great foresight when it invested heavily in developing quartz technology, then evolving it, with innovations like Spring Drive and Kinetic movements. Miyota is no slouch, either, with its leadership in solar-powered and high-beat quartz.

Considering the quality of mechanical movements Seiko and Miyota are capable of producing, and that they created the quartz crisis in Switzerland, which resulted in the rise of Swatch, it would be poetic if Japan offered us the best hope for the current Swatch-made mechanical movement crisis. And it would be ironic if they don’t ultimately provide us with the best solution.

Chris Vail is the founder of microbrands Lew & Huey, and NTH watches.