I wasn’t really into watches as a kid. I certainly had some sort of quartz watch just to make sure I didn’t miss the school bus (this was the dark ages before we had cell phones), but I didn’t have any kind of attachment to it. I wasn’t curious about how it worked and didn’t really care much about how it looked. This changed in 2012. After losing about 50 pounds and realizing I needed a new wardrobe, I decided that a watch should be part of that wardrobe.

By the time I decided I wanted to start wearing a watch again (hadn’t worn one since I got a cell phone sometime in the late ‘90s), I had also developed an appreciation for how things were made. I had become interested in buying things that were made to last. These topics would come up at family gatherings and at one of these gatherings my father-in-law asked if I’d be interested in an old watch he had. He said the watch had belonged to his father who bought it when he was taking flying lessons in the late ‘50s or early ’60s. It had just been sitting in a dresser for the last 10 years and he’d recently had it serviced but didn’t think he’d wear it. I said sure since one never passes up something free.

The watch that I received the next time we met was a steel watch with a black dial, some pushers, some sub-registers, and what looked like a date window at 3 o’clock. It said Breitling Geneve on the dial at 12 o’clock with a fancy script “B” above. (At the time I didn’t know that it was a chronograph since I hadn’t really researched many watches. My research had mainly been focused on dress watches.) My father-in-law told me it had the original strap on it and that it seemed to be running well after the service. I said thank you numerous times and proceeded to put the watch on. So now I had my first watch, but I knew nothing about it and neither did my father-in-law. 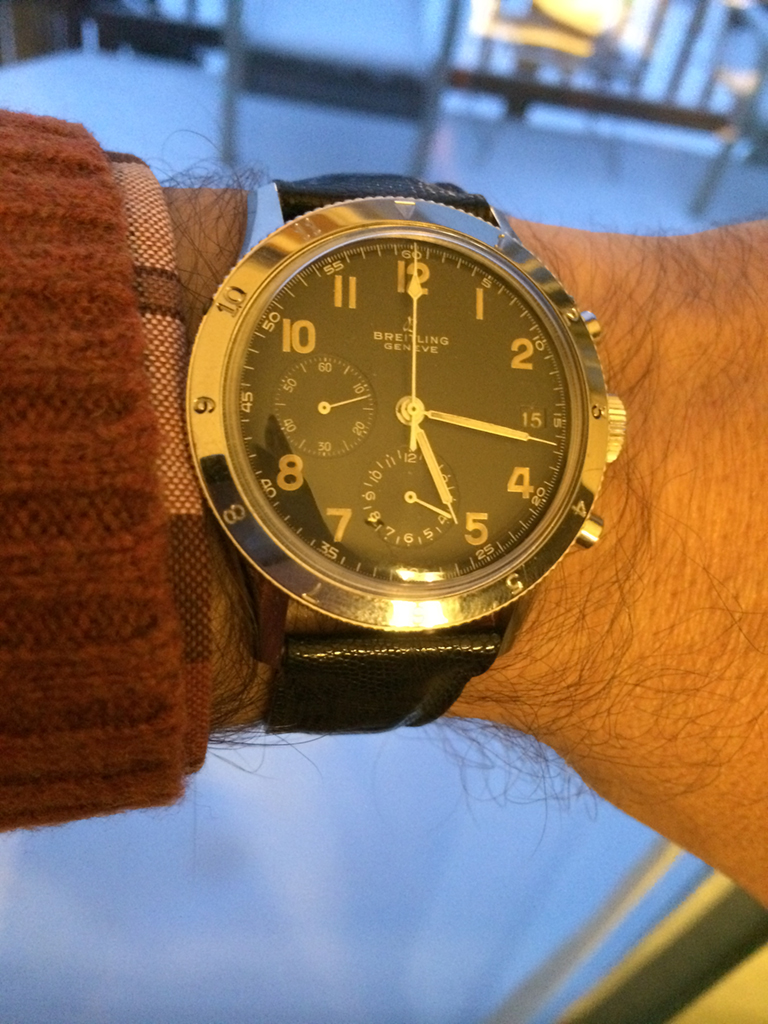 So, off to Google I went. I searched for “Breitling” and learned that they were a watch brand that was best known for producing pilot’s watches. It seemed that their most iconic watch was something called the “Navitimer.” I was intrigued because the Navitimer sort of looked like my watch but not exactly. Googling also led me to the Breitling forums. I joined the forum and started reading threads and searching through images. The back of the case on my watch said 765 AVI but searches on the forum didn’t really turn up anything that looked exactly like my watch. At this point, I started a thread and posted some photos. It wasn’t long before a Breitling collector (I later learned they are the foremost Breitling collector) informed me that the watch was most likely a 1953 Breitling 765 AVI “Digital” Co-pilot and that if I ever wanted to sell or trade it to let them know. I said thank you and went on my way.

Well, as you know, once you start researching watches it’s hard to stop. After learning about the watch that my father-in-law gave me. I started looking at other watches. At first, I was just looking at the images being posted on the Breitling forum. But it didn’t take long before I was looking at the “For Sale Or Trade” threads and seeing watches by other brands Speedmasters, Submariners, Portugiesers, and many others.

Learn From My Mistake

I took a real liking to the Speedmaster. I liked the way it looked. I liked its connection to space travel. I found myself looking at the Omega site pouring over all the different models of Speedmaster and realizing that I didn’t really have the funds to purchase one. Of course, I then started feeling that I didn’t really love the Breitling (I’m sure nothing like this has ever happened to the reader). So, I reached out to the Breitling collector on the forum and asked what they might be willing to offer. I tried doing some research to get a sense of the value of the 765 AVI, but it was very difficult since the watch was so old and rare (that should have been a clue for me) and I didn’t really know anyone in the watch world. In the end, I traded the 765 AVI for a ‘00s Speedmaster 3570.50 and a Breitling Navitimer A23322 (Silver Mercury Dial). 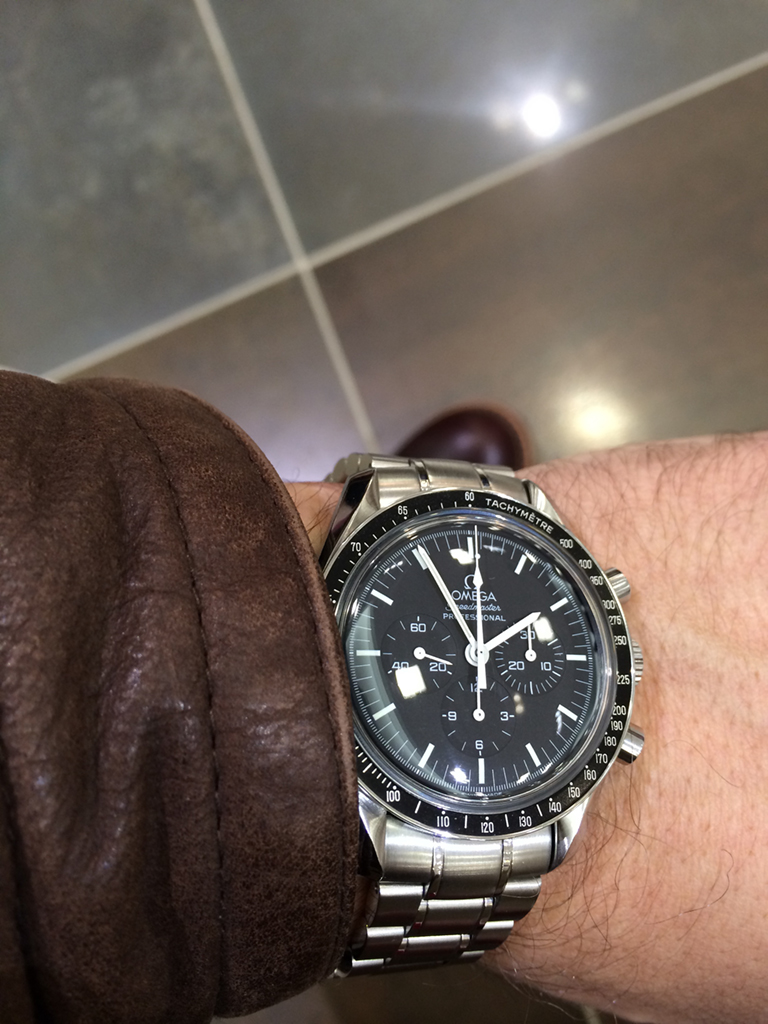 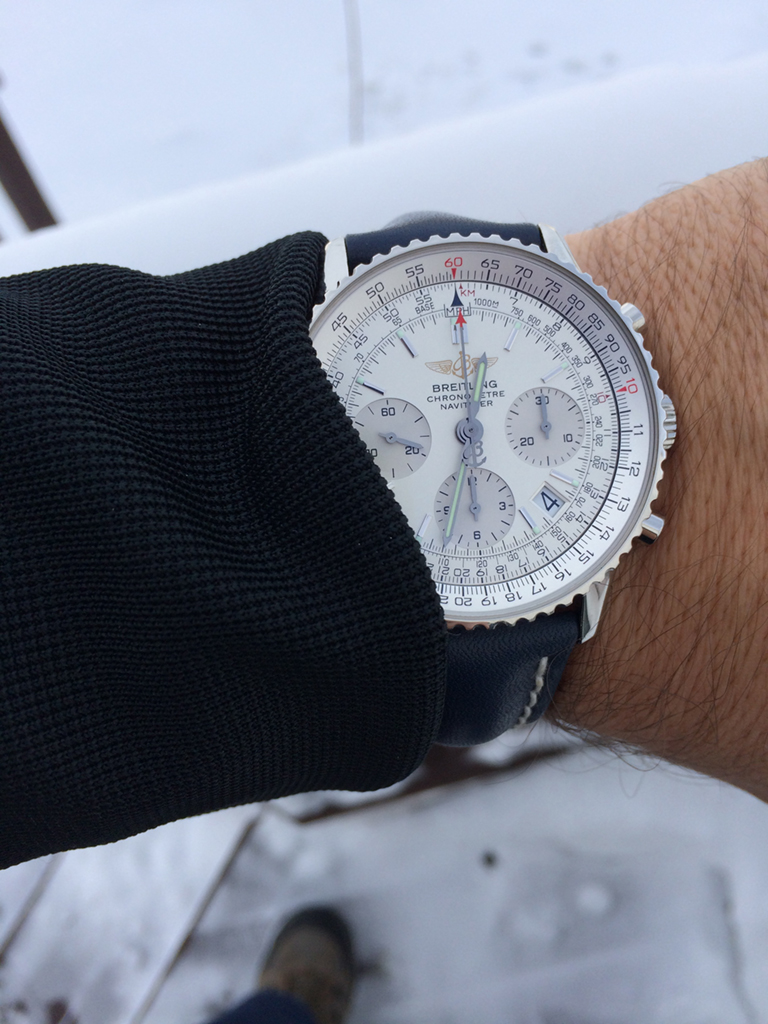 As I think about it now, I think I should have asked for more. I should have reached out to other collectors on the forum to see what they might have offered. I should have found some local watch collectors to ask for advice. I should have been more patient and really researched more. So, I would caution a watch noob that might find themselves in a similar situation where a relative or friend gifts a vintage watch to them to really do their research. Take advantage of Google, RedBar, Instagram, the numerous forums, local jewelers and ADs, and local watch groups to learn as much as can about the watch you’ve been given before you sell or trade it. Don’t be like me and later come to understand what you had and regret letting it go.

Where Are We Now?

While I do really regret trading the 765 AVI, it lives on in the watches in my current collection and it’s interesting to think about the impact of that single watch. The ‘00s Speedmaster 3570.50 was traded (with some cash) about a year after getting it for a Speedmaster Apollo XI 40th Anniversary full set in unworn condition. 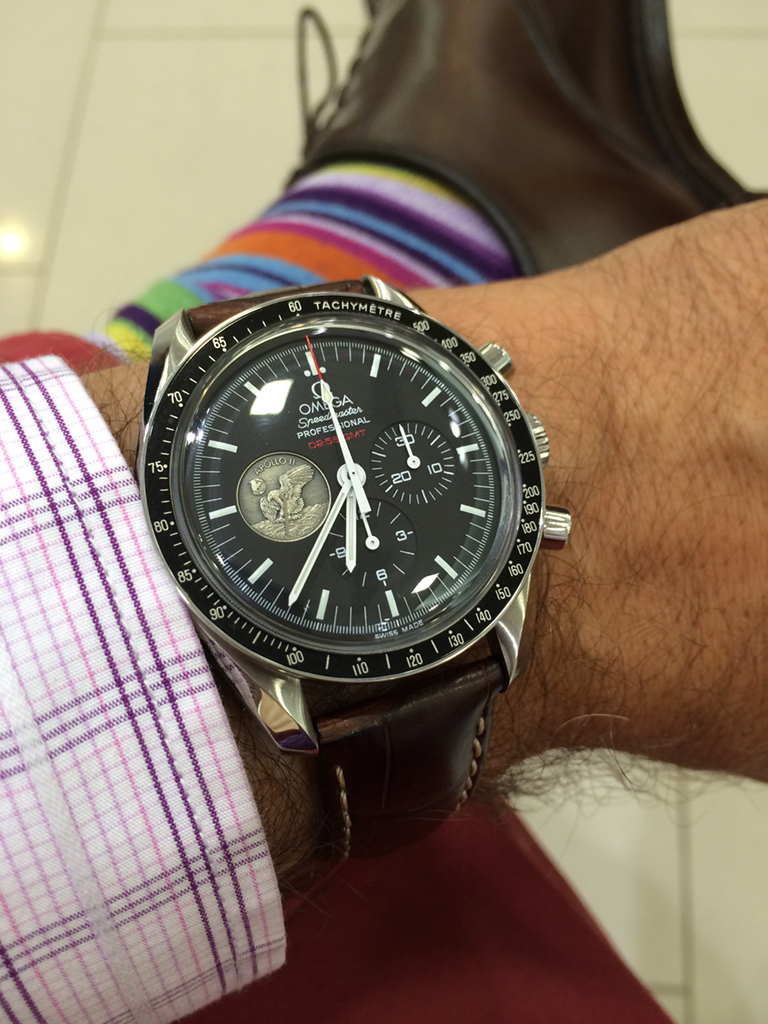 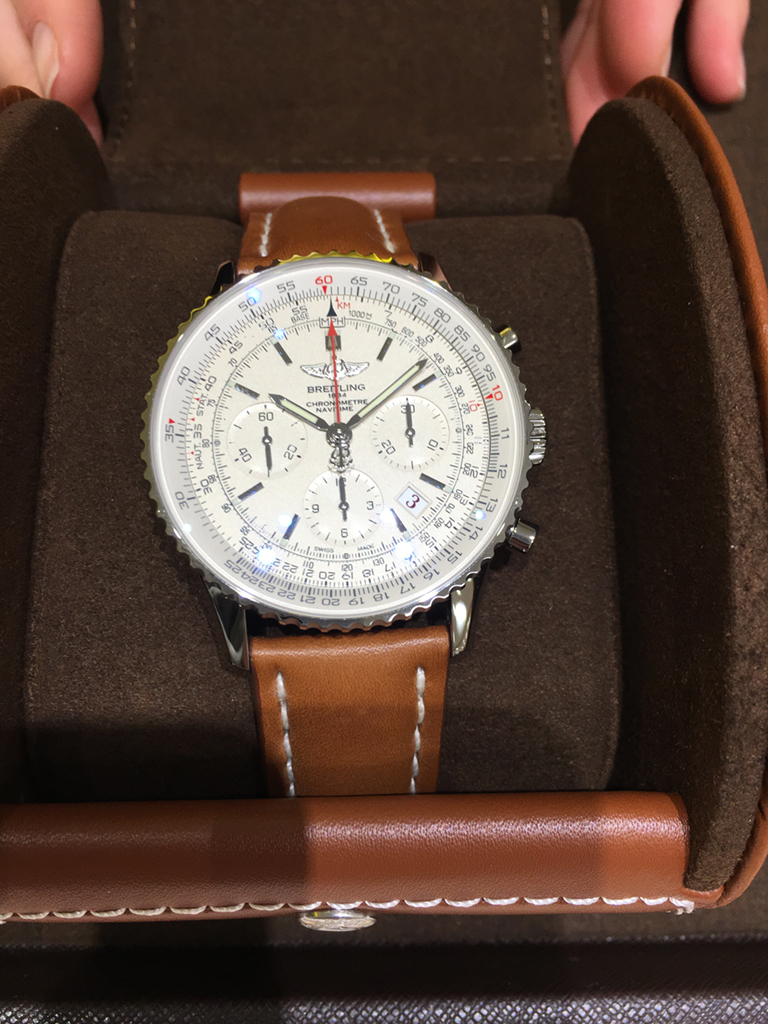 In July of this year the 2014 Speedmaster was sold and in August the proceeds (along with the trade of a Milgauss purchased in the interim) were used toward the purchase of a Rolex 126710-BLNR. 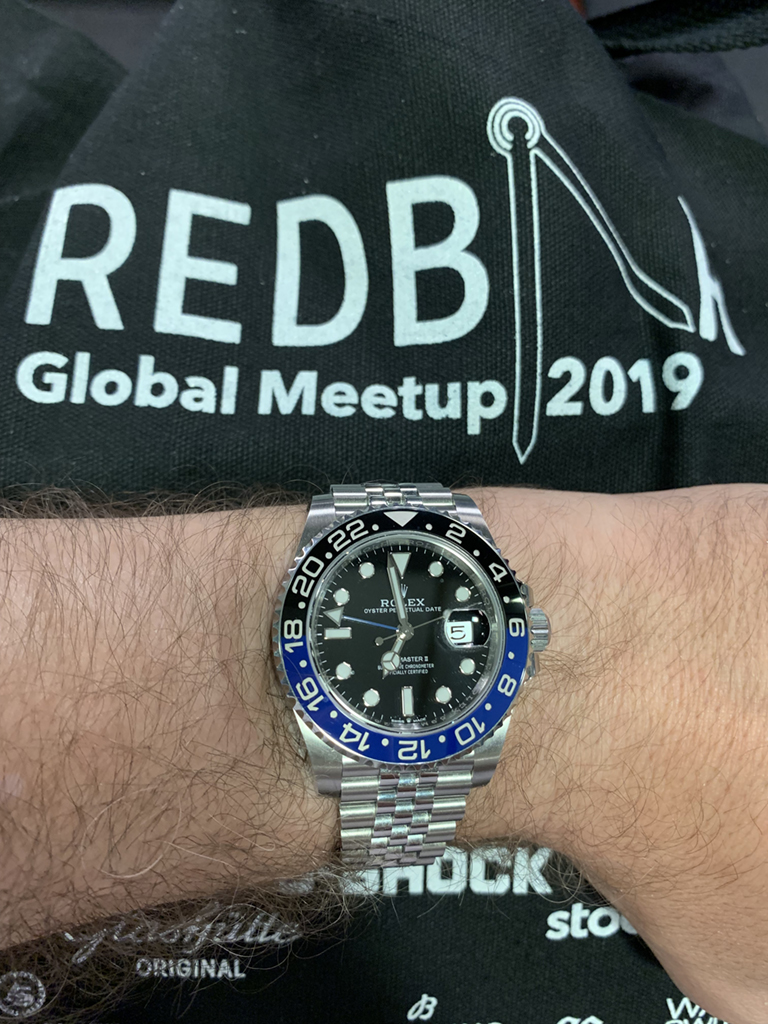 I think that is a pretty big impact for a sixty plus-year-old watch and I’m happy with how my collection has been able to develop. But dear reader, just make sure you know what you have before you let it go. 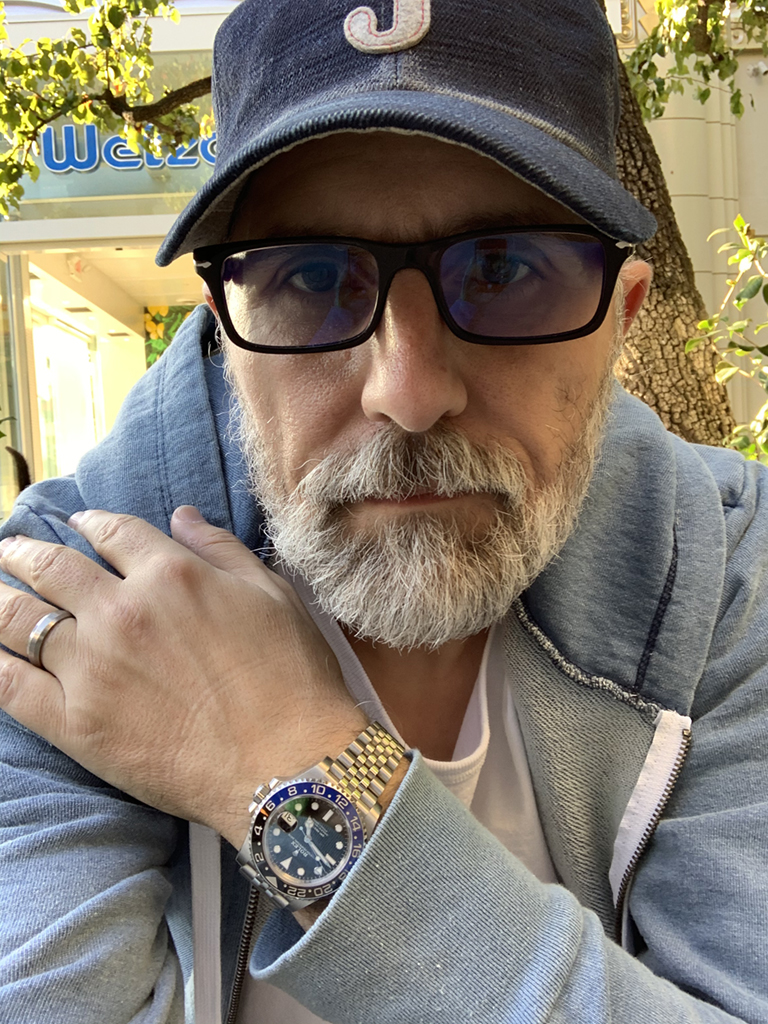