I don’t remember where I first stumbled upon anOrdain, but when I read that they had a typographer who had created their dial font taking inspiration from old Ordnance Survey maps of remote locations in the Scottish Highlands, it almost didn’t matter what the watch looked like. I was sold. 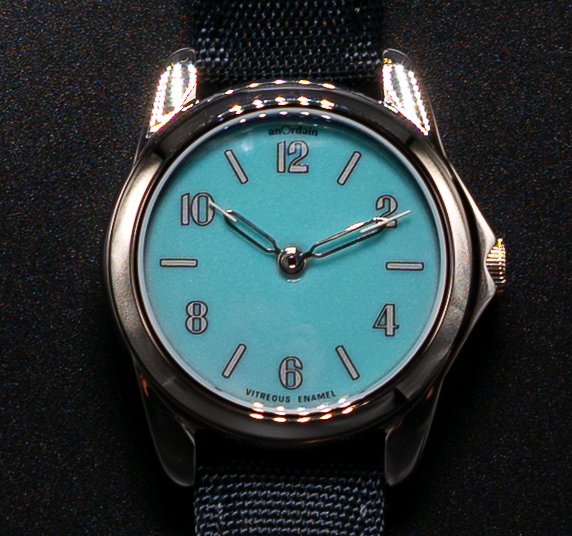 Luckily they seem to put that same amount of thoughtfulness into all other parts of the watch as well. From the in-house enameled dials for which they are best known, to the Italian leather travel case, to the British-made box and cleaning cloth that they are shipped with. To steal a line from their description of the thought that went into the packaging–the devil is in the details.

Founded in Glasgow in 2014 by Industrial Designer Lewis Heath, anOrdain spent 4000 hours over the course of three years perfecting their version of the vitreous enamel watch dial. Much has been written about their initial enamel-dialed offering, the Model 1, so I won’t go into too much detail on the process, but it involves grinding the enamel into dust, applying it to a copper disk, firing it in a kiln to more than 830°C, cooling and checking, and repeating the process until the desired color and depth are achieved. There is a reason this type of enamel is usually reserved for much more expensive watches. 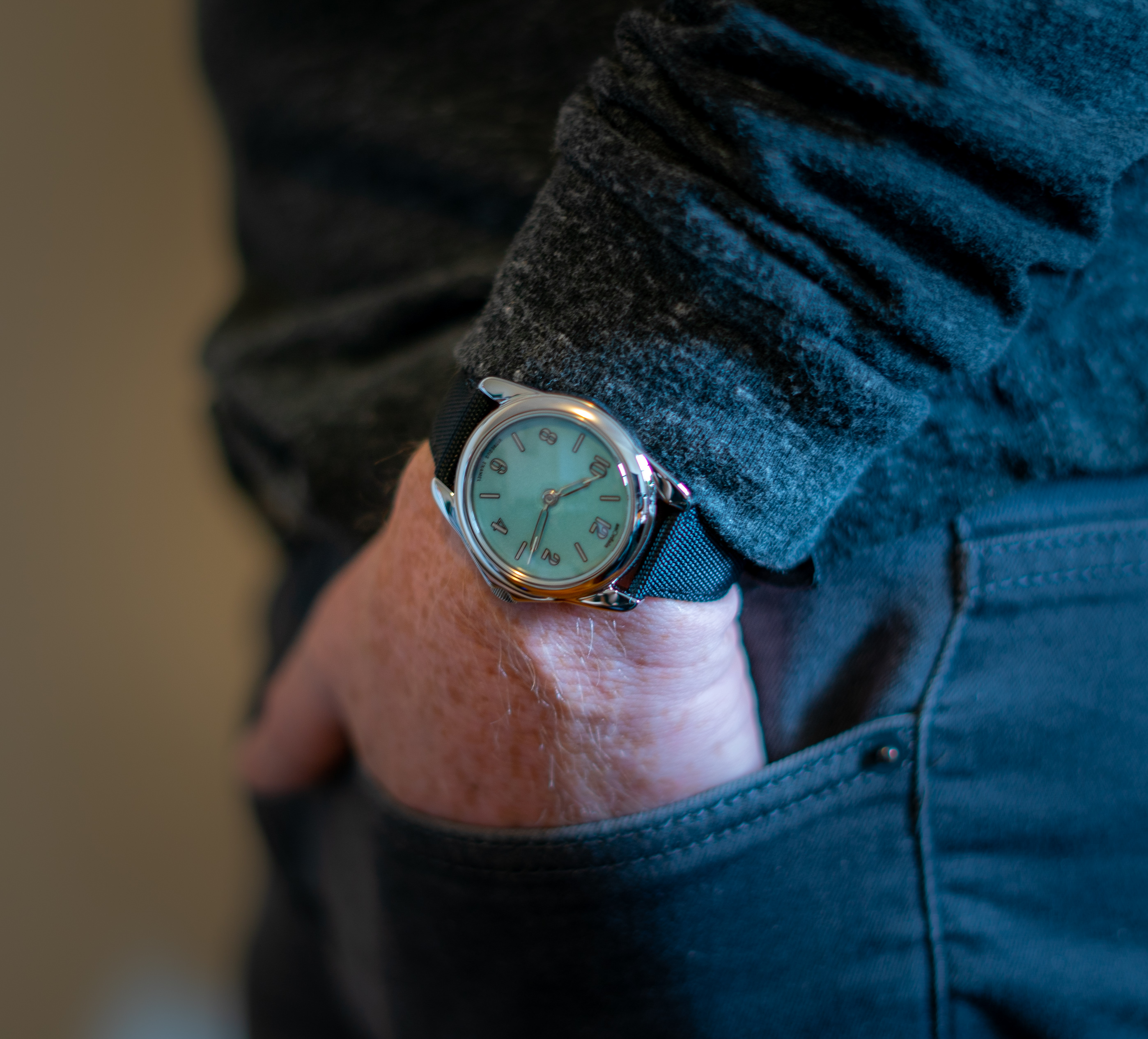 As an early Model 1 adopter, I was understandably pretty excited when they started teasing images of the Model 2, and from the little, you could make out, it looked a bit more military in flavor. My only complaint about the Model 1 has been that it is possibly a tad too dressy for my own personal style, so something a bit more field watch in spirit would be just about perfect. 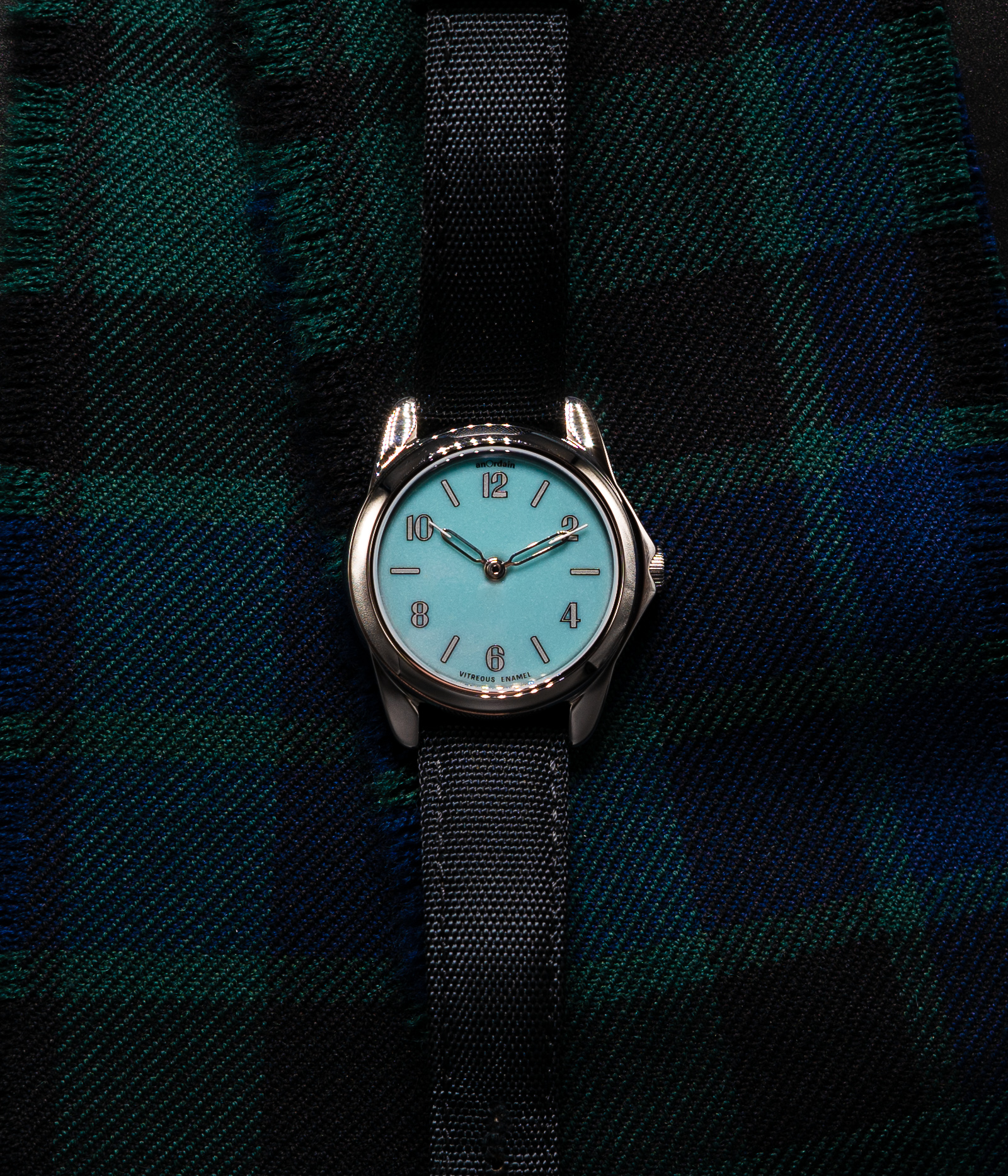 I happened to have a trip to Scotland coming up that coincided nicely with the release of the Model 2, so Lewis and the team were kind enough to invite me through to pick mine up in person and check out the new workshop they had recently moved into. It’s a lovely modern space with one well-ventilated room for enameling and another for watchmaking. I had a look around and a quick chat with watchmaker Chris about the dials and movements and his preference for pink finger cots over the boring old white ones, and I was on my way with a freshly-packaged new Model 2. 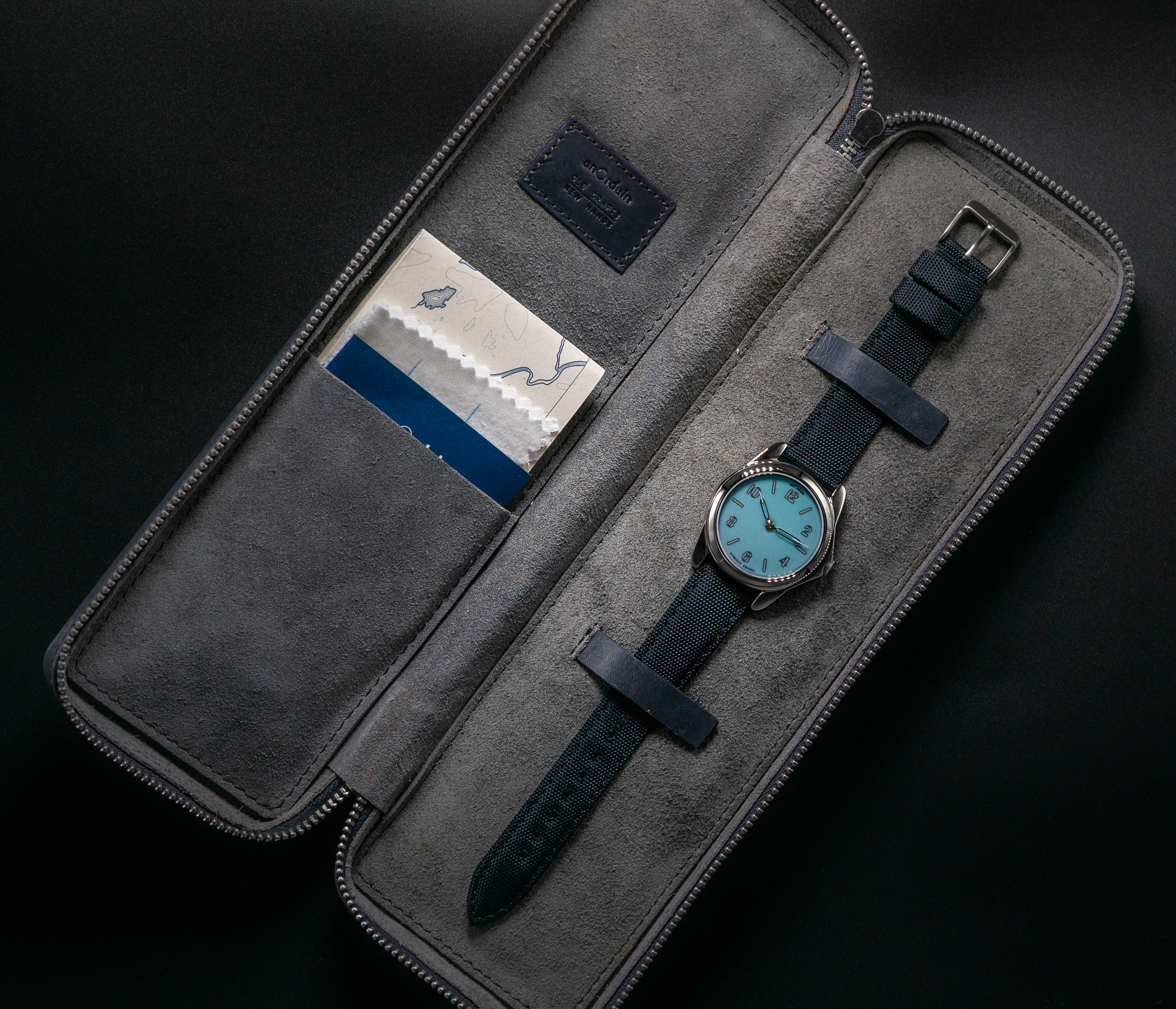 The first and most immediately noticeable thing about the Model 2 is its relatively diminutive size. In a watch landscape littered with 42-45mm monstrosities, its 36mm size is a breath of fresh air. At 11mm in thickness it’s not the thinnest watch in the world, but it is nicely proportioned and it’s very easy to forget you are wearing it, which I think is a win in the field-ish watch category. The polished case adds just a touch of dressiness, but the substantial bezel and crown guard keeps it firmly in the tool watch camp. I came up with a completely new and original sentence to describe it: “It looks as good with jeans and a T-shirt as it does with a suit and tie.” I invite other watch reviewers to start using this phrase, maybe it will catch on.

Now on to anOrdain’s main attraction: the enamel dial. With their new facilities and some fine-tuning of the process since the Model 1 days, they have been able to increase their dial output, but it is still a very slow process. They are currently able to make about eight dials in a given week. If you haven’t seen an enamel watch dial in real life, it is difficult to put into words. They offer a real depth and richness of color that you just don’t get with other dial materials. The colors seem to change with the time of day and moving from outside to indoors or even just from one room to another, and the result is something pretty special that is hard to stop looking at. From the off-white “Iron Cream” of my Model 1 to the “Torr Blue” I went with this time, they are all really beautiful in person. The skeletal hands and lack of a second hand put the dial in the forefront, where it belongs. 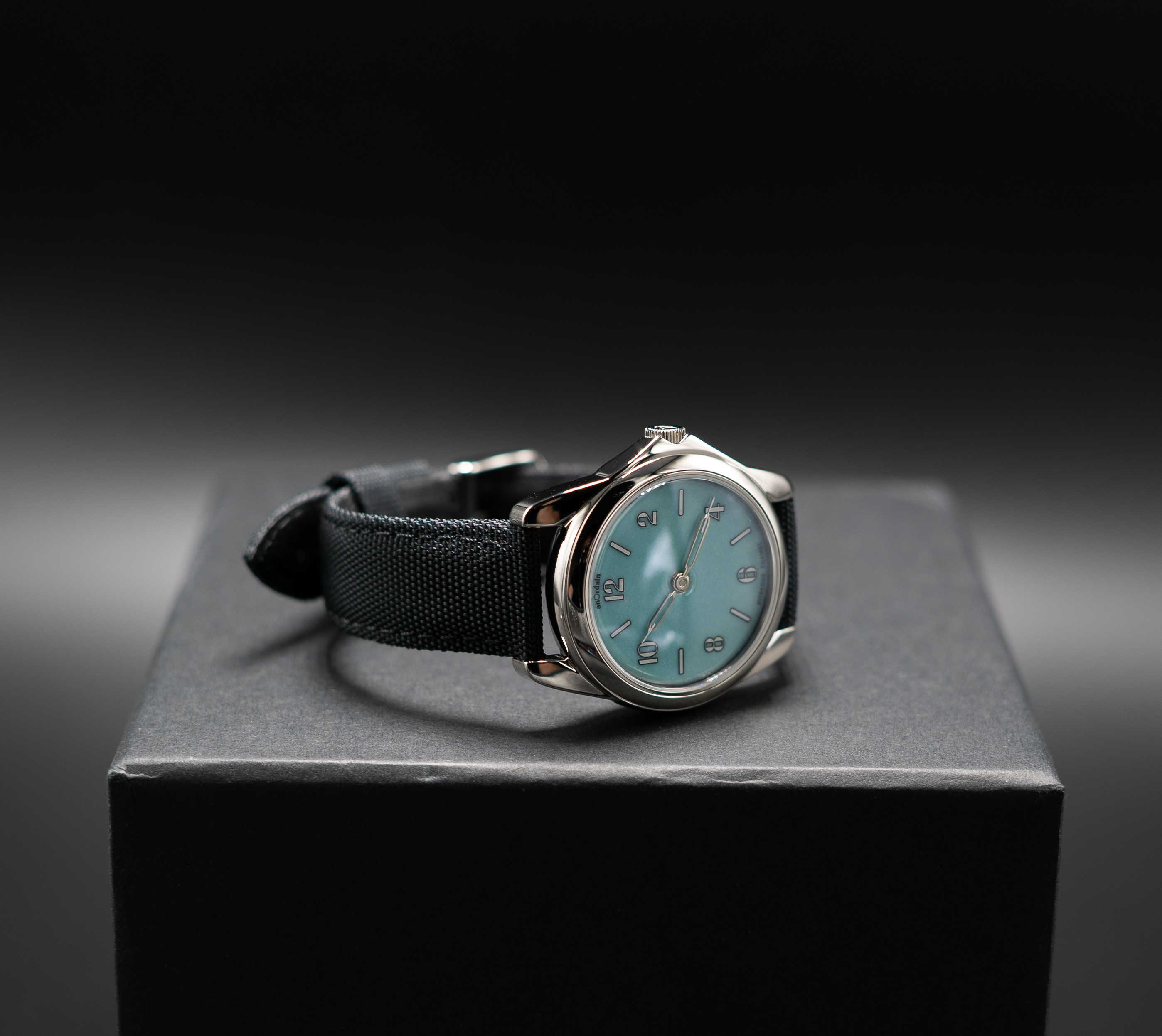 There are six dial colors to choose from, each taking inspiration from a different aspect of the Scottish Highlands. Moss Green is an Army green type color that goes well with the spirit of a field watch. Torr Blue is like the sky but with the saturation turned up to 11. Or 10.5. Grey is a soft mid to dark grey, reminiscent of the rainy Scottish skies. The Midnight Green is an interesting color that looks almost black when seen indoors but under the right light reveals what looks like a very dark British racing green to my eye. White is a very clean, well, white. I don’t know how else to explain that one. The Purple is a deep, dark purple, that looks like a thick grape jam. 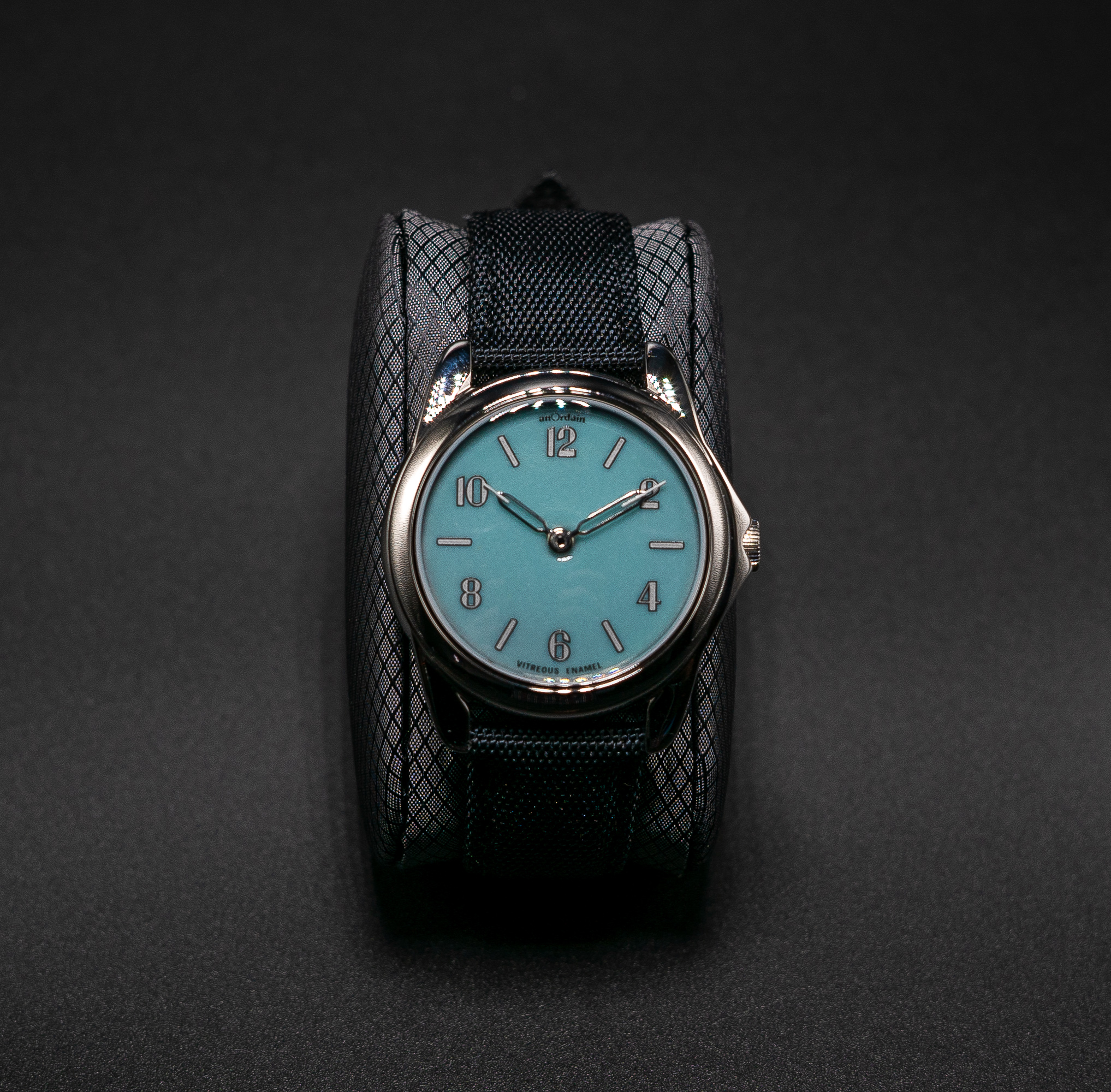 The movement is the solid Sellita SW-210-1, which is a clone of the ETA 2801-2. It features 19 jewels and Incabloc shock system. It beats at 28,800vph with a power reserve of approximately 42 hours. As a fun little easter egg, the first 99 Model 2s have the ETA movement which the team bought a batch of before they became more difficult to obtain in large numbers. anOrdain’s Product Designer and Architect Lewis told me he keeps forgetting to tell people about this, so if you’re one of the first 99 to buy, surprise! The case is 316L stainless steel with a solid, screw-in caseback. The crystal is sapphire with six layers of anti-reflective coating, so you’re covered if you do want to actually take it out in the proverbial field. It comes with your choice of a few different high-quality leather straps. I swapped mine for a sailcloth strap, which I think goes a little better with the field watch vibe.

Overall this is a much smaller and sportier outing than the Model 1, and I think it’s a choice that worked out very well. It has the feel of a minimalist tool watch, but with the enamel dial that really sets it apart in the sport watch space. Available now from anOrdain.com starting at £950. 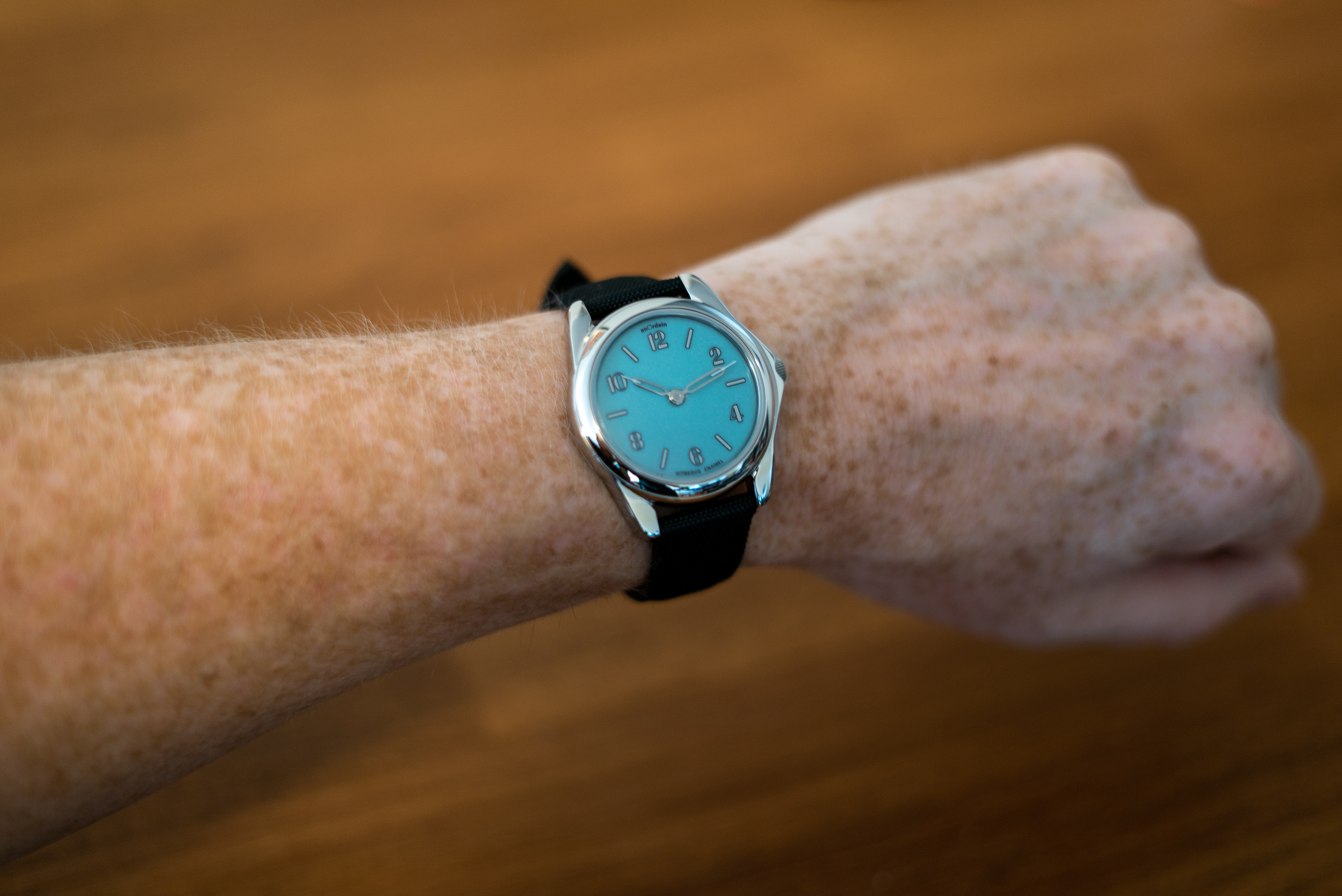