When I was 6 years old my pop introduced me to the world of watches. He had 2 timepieces that I used to wind up and play with. One was a 14ct Gold Omega Genève – which was his retirement gift, but the one that sparked my obsession was his 1969 Omega Chronostop Genève. 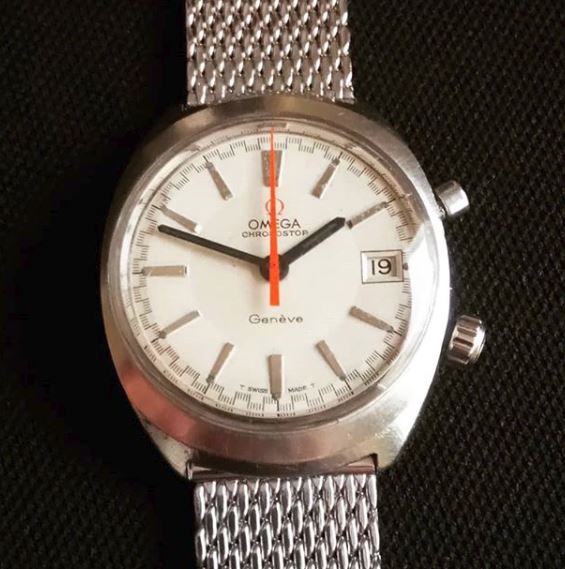 The 60 second stop watch function when you are a kid set two things in motion for me.
Love of mechanical timepieces and a soft spot for anything with a Red (or coloured) second hand.

For me seeing this mechanical universe come to life in your hand with that sweeping motion and hearing the gears tick away just had me hooked. I could sit there for ages just watching the seconds tick by and just been fixated with all the little nuances of the white racing dial. Right down to the Red emblazoned Omega logo sitting proudly in the middle of the dial.

Just before he passed away, he was wearing it when he was opening the old wooden garage door which had become stuck after a few days of rain, when the door suddenly came free and the old bolt lock swung back and smashed the watch. The glass had shattered and the red chronograph hand was badly damaged.

To say we were both dejected would be an understatement.

I remember later that day we walked down the road to the high street in our suburb to the little watchmaker store. He managed to put it back together, but the red second hand was destroyed beyond repair. He didn’t have any official omega parts for the Chronostop so we had to make do with a brass replacement. After that my Pop never wore the watch again and it went into the top drawer. 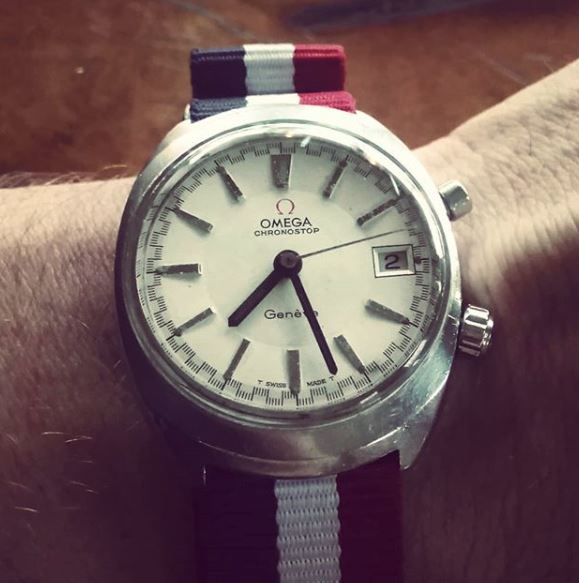 I would still play with it from time to time, wind it up – (I also dropped it again on the kitchen table which put a ding in the side of the case) but that Brass replacement hand would always remind me of its former glory and how worn out it looked without its brilliant red second hand.

Fast forward to 2007 and I had moved to Melbourne a few years earlier with the watch in tow – It still hadn’t been repaired properly as I didn’t have the funds at the time and I had a few Seiko’s that I was wearing in circulation.

One Sunday afternoon I returned back home after being out with friends and saw that the back door was ajar and that the lock was busted – that’s when I noticed a few things were missing. Unfortunately along with these things were my Seiko’s and the Omega.

The police came over the following day asking questions about what was stolen, I gave them the details of all the watches but nothing turned up.

For the following 12 months, I would pop into a pawn dealer, op shops, weekend flea markets to search but nothing came up and I eventually gave up looking.

About 2 years ago I stumbled upon a YouTube video with Alton Brown and his watch collection. Being a fan of his shows and now discovering he was a watch collector I was fascinated to see what he had in his collection. What made me sit up straight in my chair was at the end of the video was his story about his father’s Seamaster Chronostop and how he found it many many years later by setting alerts on eBay. I think I sat there for a moment and thought to myself ‘Now why didn’t I think of that!’

I logged into eBay and put in all the key details of the watch and every few weeks I’d get a few hits, but nothing… 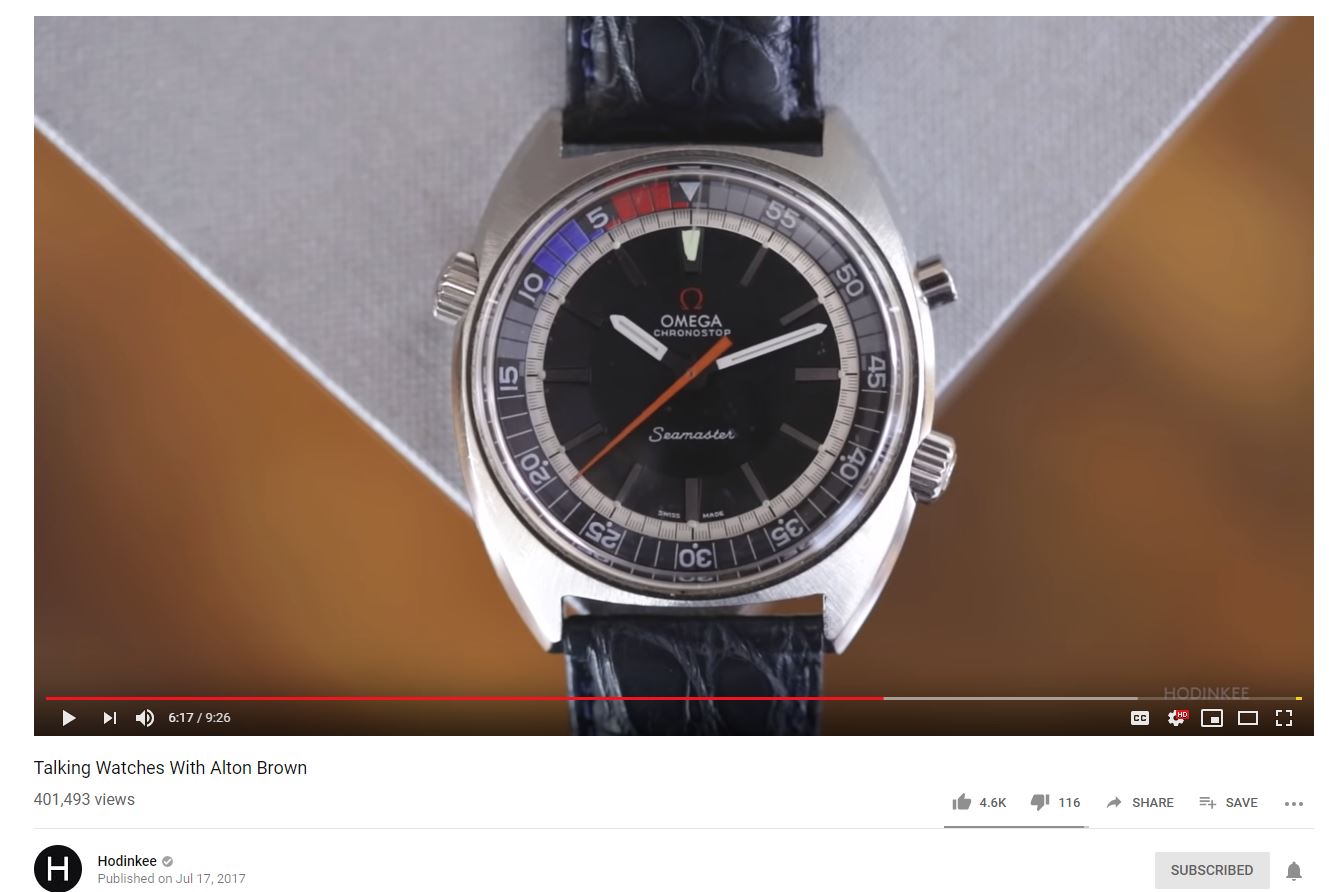 Fast forward to about 3 months ago.

I get another eBay alert, I go through the motions of scrolling through the listings and pictures. But this day I open it and there it is … staring me right in the face.

That bloody brass replacement hand smack bang in the middle of the dial.

I think I sat there for a good minute or so before I delved deeper… I scrolled through the other pictures and low and behold there it was the final confirmation.

That ding mark l left when I dropped it on the kitchen table all those years ago. 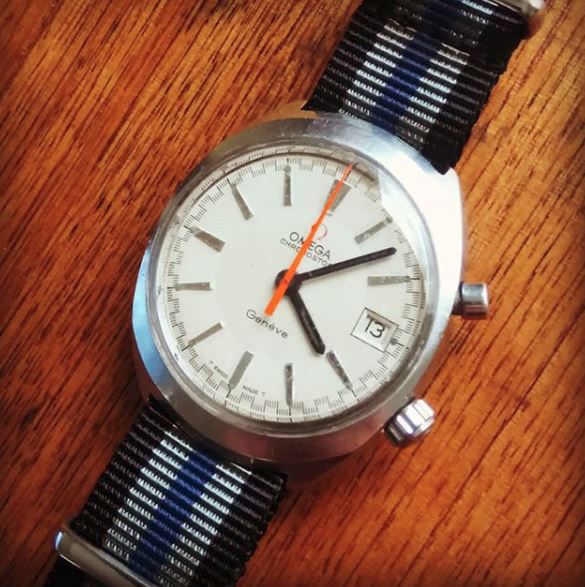 I have never ever been more pleased about my clumsiness in all my life. Within seconds I snapped up the watch. I have never felt so anxious about an eBay purchase and the moment it arrived in its parcel, that moment seeing it and holding it in my hand was like holding a premiership trophy.

It was happy, it was glorious, and it was home.

The next day I took it to my local watchmaker. He is a brilliant chap and over the past few years since getting into the hobby more seriously, he has restored a few other vintage pieces I had collected.

It was keeping good time, but there was one thing I was going to get done immediately.

Get rid of that damn brass replacement hand.

Having it back seems so surreal. Now with its proper red chronograph hand, a new Milanese strap and hearing the gears roar back into life, it feels like the Universe has aligned itself.

Later this month I’ll be taking back to the watchmaker so it gets a proper service. After 30 years since it was beaten to hell and back, the stories it could tell. It well and truly deserves some TLC and most importantly of all… time back on the wrist.

The hero has returned.