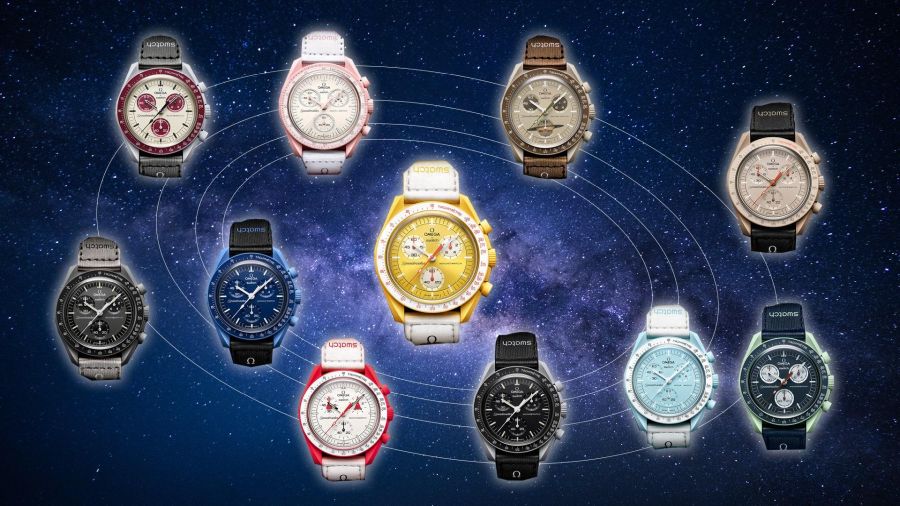 Normally the lead up to Watches & Wonders is something of a lull, like the calm before the storm. However, this past week or so has bucked this trend, particularly with all the mania around the Omega x Swatch release. Besides that, we have a quiet but beautiful release from Omega, and a lovely new dial from H Moser & Cie. In other watch news, we also have Swatch Group’s pledge to expand its relationship with retailers, H Moser & Cie starting subsidiary in USA, Greubel Forsey taking its fate fully back in its own hands and HODINKEE appointing a new CEO.  These are the top 7 things in the world of watches this week; let’s get into it. 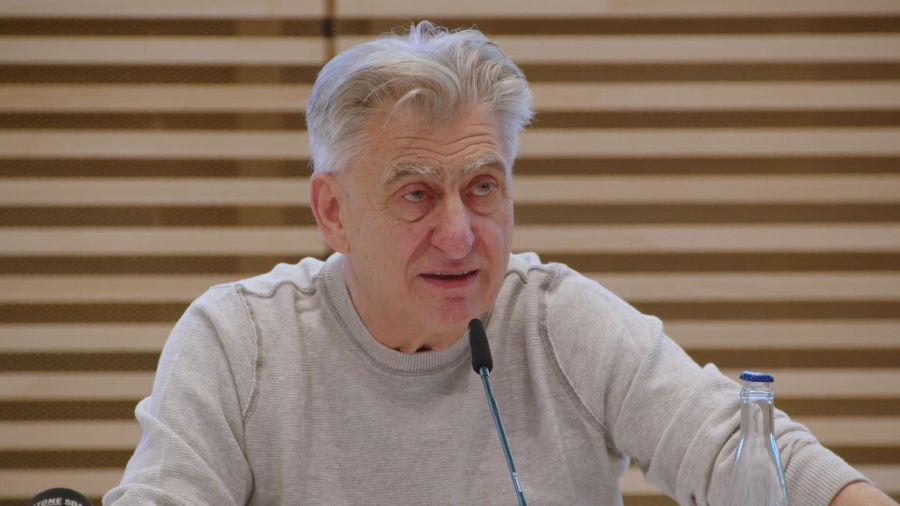 To say that the luxury watch industry has always been sluggish in terms of business innovation would be an understatement. After all, the very product is sells would’ve been an antique in most other industries. It is no surprise then, that while e-commerce overtook the world more than two decades ago, the watch industry has generally bee set in its brick and mortar sales model.. However, in the past half a decade or so, there has been a significant growth of direct to consumer business models particularly driven smaller, independent brands. Those who feel the biggest squeeze naturally are the retailers who do not actually own or develop any of their own products. Swatch Group recently announced at its annual media conference that it would be strengthening its relationships with retailers and expanding its distribution though those channels. Dr Peter Stieger explained that it was looking to fill the gaps that other competing brands had left in their pivot to e-commerce and directly owned boutiques. CEO Nick Hayek stated his belief that despite challenging times for retailers in the past two years, things will continue to pick up and that Swatch Group’s direct to consumer e-commerce and boutique sales have not taken away from its retail distribution business. It will be interesting to see how this business strategy works out for the group in the coming years as more brands like Audemars Piguet adopt a different philosophy. 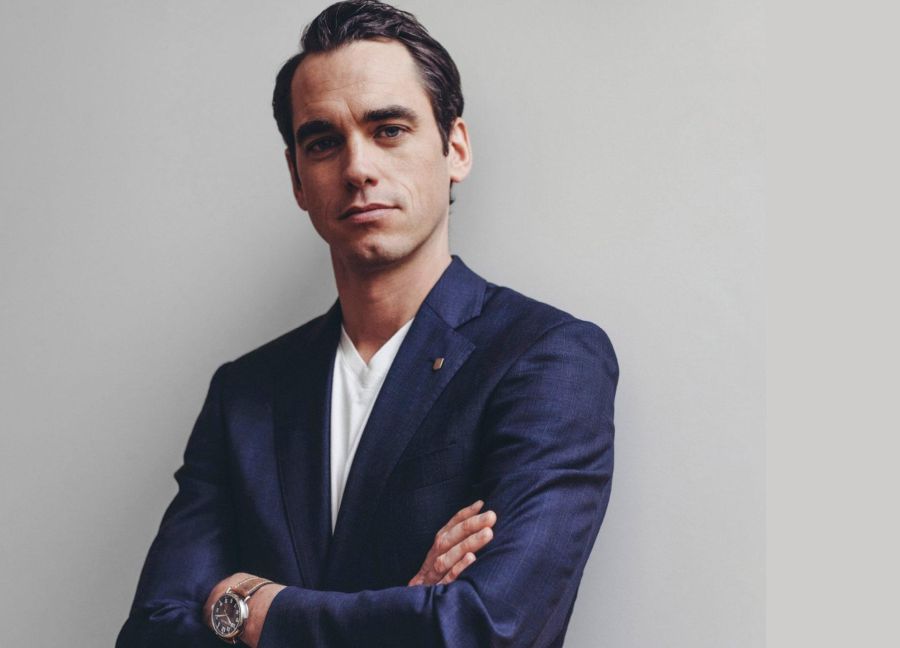 With a tremendous growth in interest in independent brands over the past few years, it isn’t surprising that retailers are seeking capitalise by attempting to secure distribution contracts for brands like H Moser & Cie. However, the brand has shown that it prefers to set up its own distribution channels, after having had to often manage on their own in preceding years ahead. Its latest is MELB Holding (the brand’s holding company) setting up a wholly-own subsidiary in America. This is in addition to subsidiaries already established in Asia and the Middle East which allows the brand to fully capitalise on the exponential increase in demand for similar independent brands. It is a move that makes sense too, given how well the company has done without the kind of support from distribution networks that bigger conglomerate brands have enjoyed over the years. 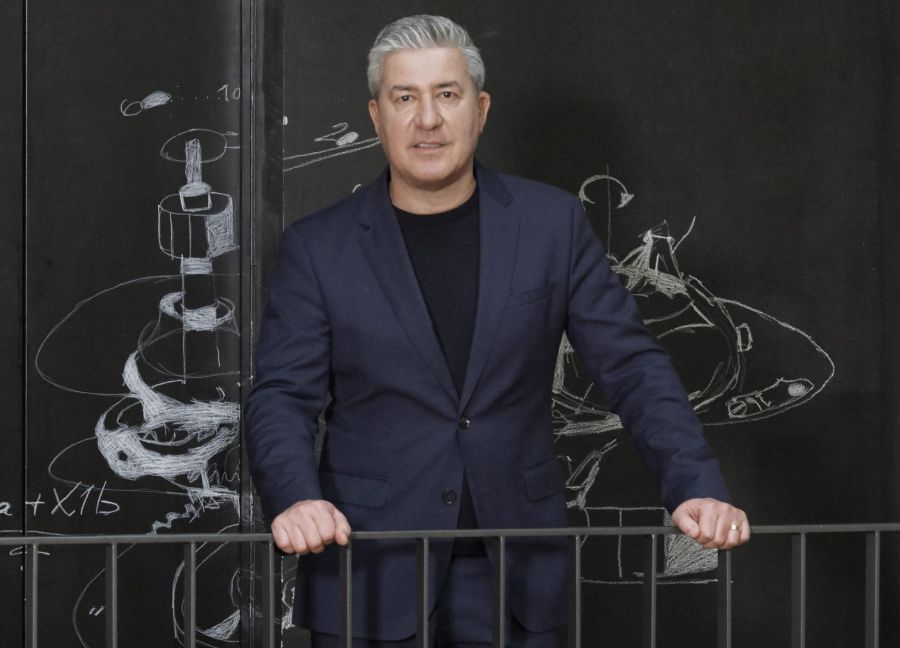 Another independent brand that has capitalised on all the spiking demand for independent brands is Greubel Forsey which has just bought back the minority stake owned by Richemont Group. The share buyback returns full control to Robert Greubel, majority shareholder and Chairman, Stephen Forsey, founding shareholder and Antonio Calce, CEO and Executive Board Member, regained complete control and independence. This would be the first time that the brand is once again fully independent in 16 years, having sold a 20% stake to Richemont in 2006. With full control, the company can now fully drive the initiatives that it wishes to focus on, one of which is lowering its price point to the US$200,000 to US$300,000 market (which sounds kind of ridiculous when said out loud). Irony aside, it would allow the brand to expand its target audience which is a strategic move given the demand for such brands currently. 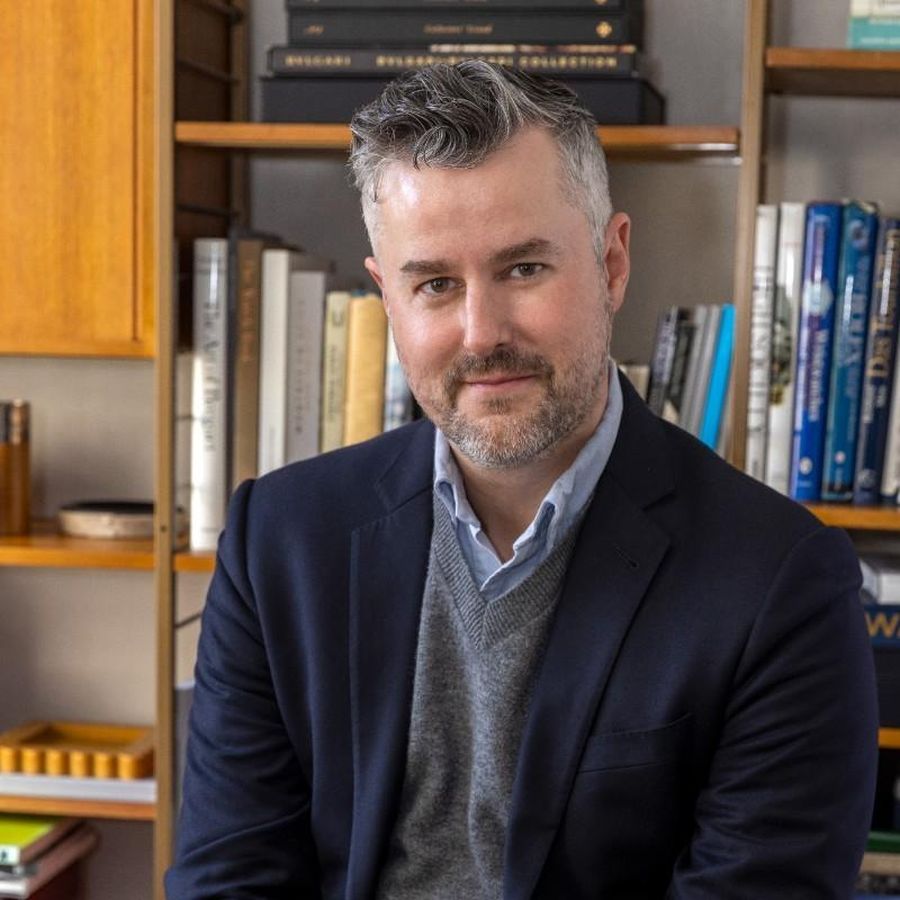 Over several years, HODINKEE has gradually become less online platform discussing watches and more media giant and e-commerce retailer in the watch industry. In the past year, the company gain several rounds of new investment and appointed talent with experience in the luxury ecommerce space. Following Ben Clymer’s shift to executive chairman, Tobey Bateman, former Mr Porter managing director, was appointed CEO. And while that appointment never really took off because Mr Bateman was London based and the world was basically on lockdown, that set a pattern for the company. It has now appointed a new CEO, Jerry Fowler, who spend six years as president of Farfetch’s America operations. Unsurprisingly, Farfetch is a secondary market for luxury fashion that is listed on the New York Stock Exchange. Mr Fowler’s expertise in the USA luxury market makes him an even better fit at HODINKEE and his years at Tag Heuer and Cartier before that certainly doesn’t hurt. It will be interesting to see the direction that HODINKEE takes going forward and I wonder if thoughts of going public are being considered too. 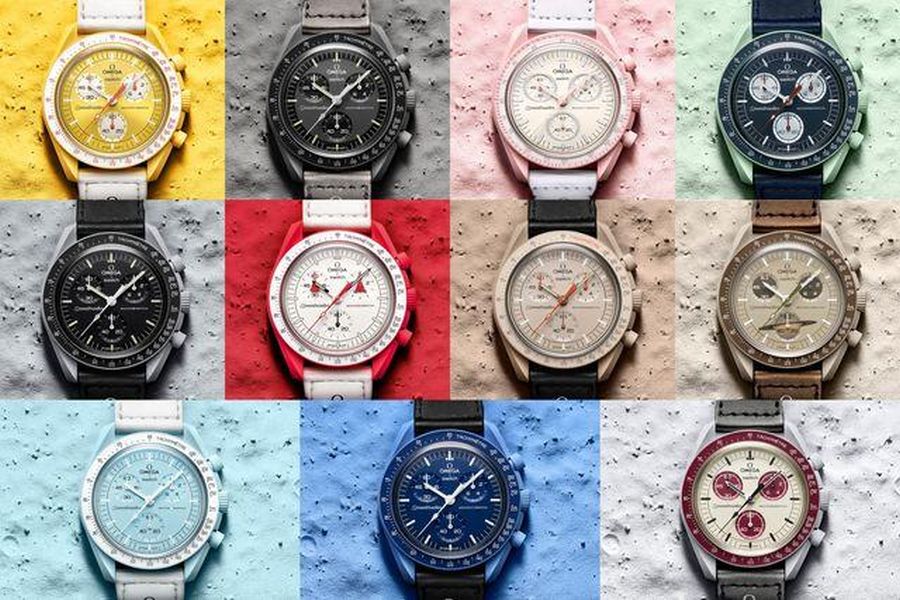 Now for the big news of the week, the Omega x Swatch collaborations. The collaboration comprised of 11 watches, all modelled after Omega’s iconic Moonwatch, hence the “MoonSwatch” name. The 11 watches were dubbed as missions to the sun, moon and various planets, including Pluto. They came in a variety of colours, with a mix of louder colours like Tiffany Blue, baby pink, as well as the more serious like navy, grey, brown and even an almost exact replica of the Moonwatch apart from some textual differences. The price is extremely affordable, at S$372 per watch, though the Bioceramic material (which looks and feels a bit like plastic) and quartz movement explains the lower cost. All in all, pretty much a Swatch with Omega’s branding and aesthetic lent to it. Personally, this was a really cool collaboration, something that saw as a new gateway for people to get into both brands, or perhaps a viable option for younger teenagers. The reaction to the launch though, was basically a whole story in an of itself, with massive throngs of people queuing up, some as early as 48 hours before. The mad rush for the watches (which are not limited), naturally resulted in tempers flaring around the world, with videos of the queues and resultant skirmishes available on various social media platforms and even on more mainstream news outlets. Swatch (the brand not the group) clearly did not have any plans for managing the crowd though it’s difficult to tell if that would have gone better if the watches had not been leaked 2 days in advance. Sadly, there have also been a whole slew of scalper listings of these watches, some with asking prices in the thousands for a watch that is not limited. Here’s hoping that they take a major loss though there’s often more people with money than sense. 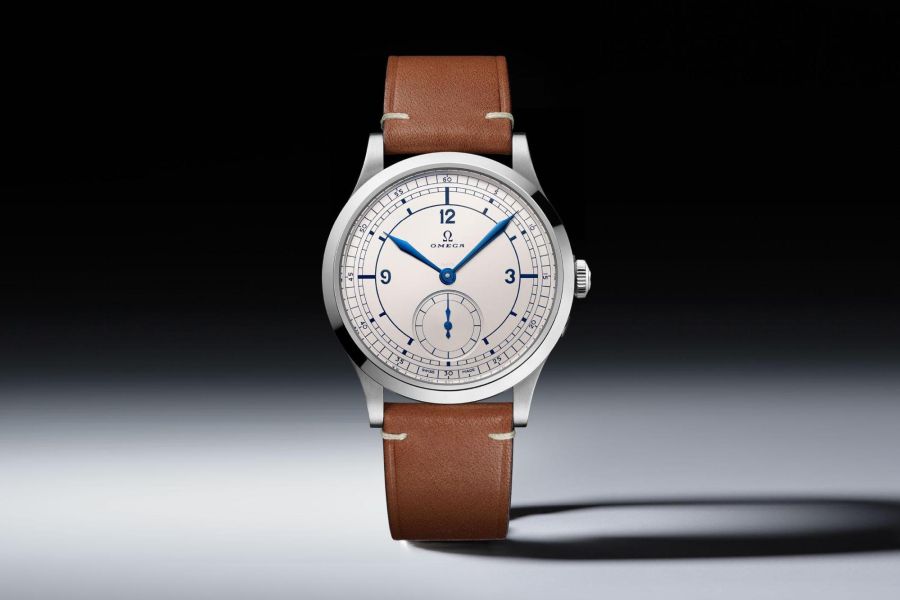 After the last two weeks, I would not have expected any new releases from Omega, but the brand has proven me wrong, quietly releasing a beautiful vintage designed reissue. Modelled after the CK859 first released in the 1930s, the watch has a Art Deco aesthetic. The box sapphire crystal shows off the sector dial with two minute railway tracks, an additional hour track and a small seconds sub-dial. The dial material is a brand favourite Ag925 though the colour interestingly leans to a tinge of cream. The dial is paired with blued hands, indices and numerals of 3-9-12. The case back is a beauty to behold as well, housing the remarkably finished Calibre 826 which features dual bridges, blackened screws and stripe in Arabesque. The movement comes with all of Omega’s bells and whistles with a Master Chronometer certification, co-axial escapement, silicon balance spring, and dual barrels providing a 72 hours of power reserve. The stainless steel case has a 39mm width (I would’ve preferred 38 or 37mm) and which works on a watch that straddles this dress and field watch vibe. It is a not limited but is a numbered edition and is priced at EUR 6,800. Overall, it is a lovely release from the brand, even if it has some similarities to the to some of the heritage releases from Longines. 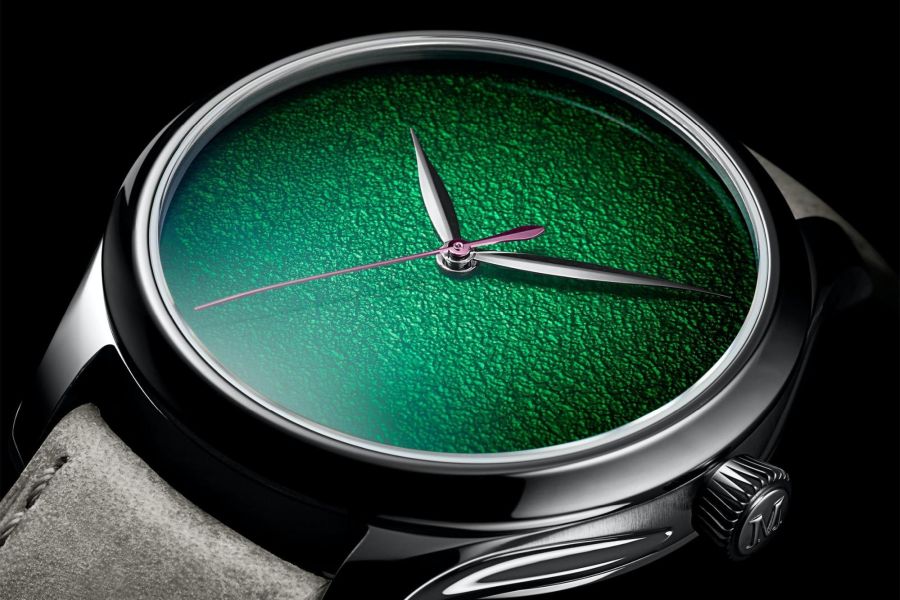 And now, to kick Watches & Wonders 2022 off a few days early, we have H Moser & Cie’s latest release, the Endeavour Centre Seconds Concept Lime Green. What is unique about this release is that this dial is not just special (most H Moser dials are), it is special in the brand’s line-up. It is the first fumé dial that the brand has combined with texture, think Seiko Presage Cocktail, but at a haute horology level. It is something that has to be in appreciated in person though solely from the pictures, it looks executed wonderfully. The complex enamelling process that is made tougher with the need for hammering means every dial is not exactly the same. When paired with heat-purpled hands (more complex that heat-blued hands) and the suede grey strap, this watch makes for a fun dressy piece that is more versatile than a traditional dress watch, especially when it comes in at 40mm. And though I always prefer smaller watches, the case has already been slimmed down from its usual 42mm sizing. While there are some comparisons between this to one of Anordain’s Model 1 watches, I absolutely love this non-limited release from the brand and hope to check it out in person one day. For those interested, it costs US$27,600. 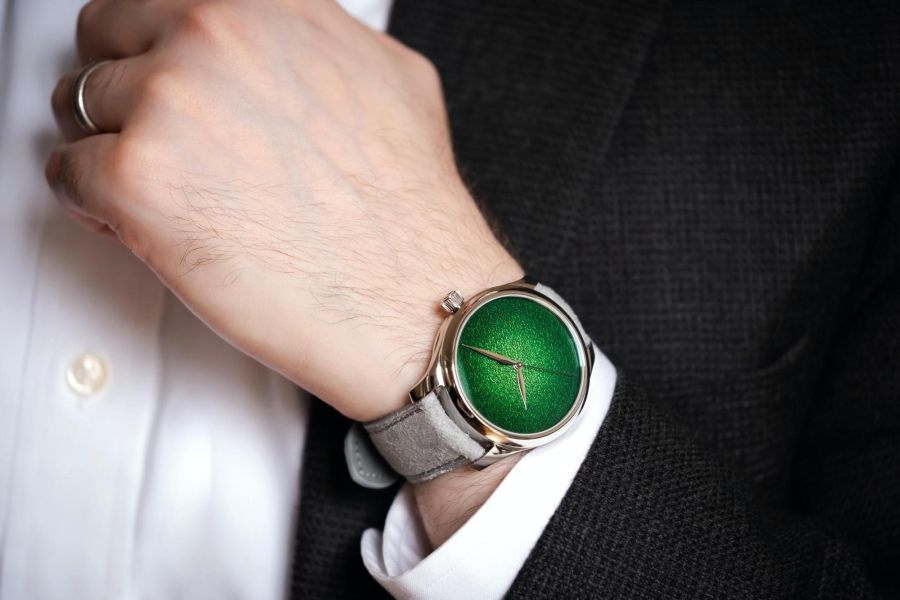 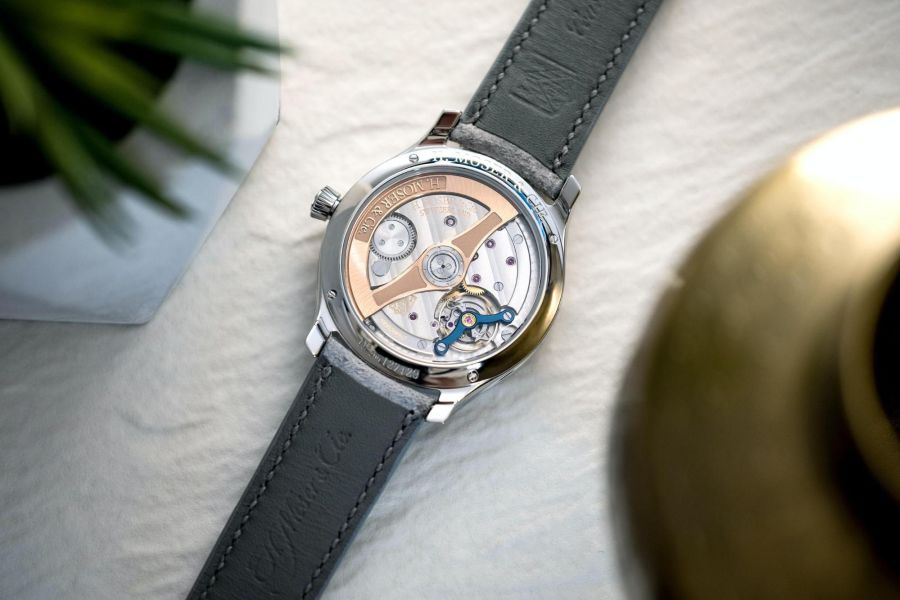 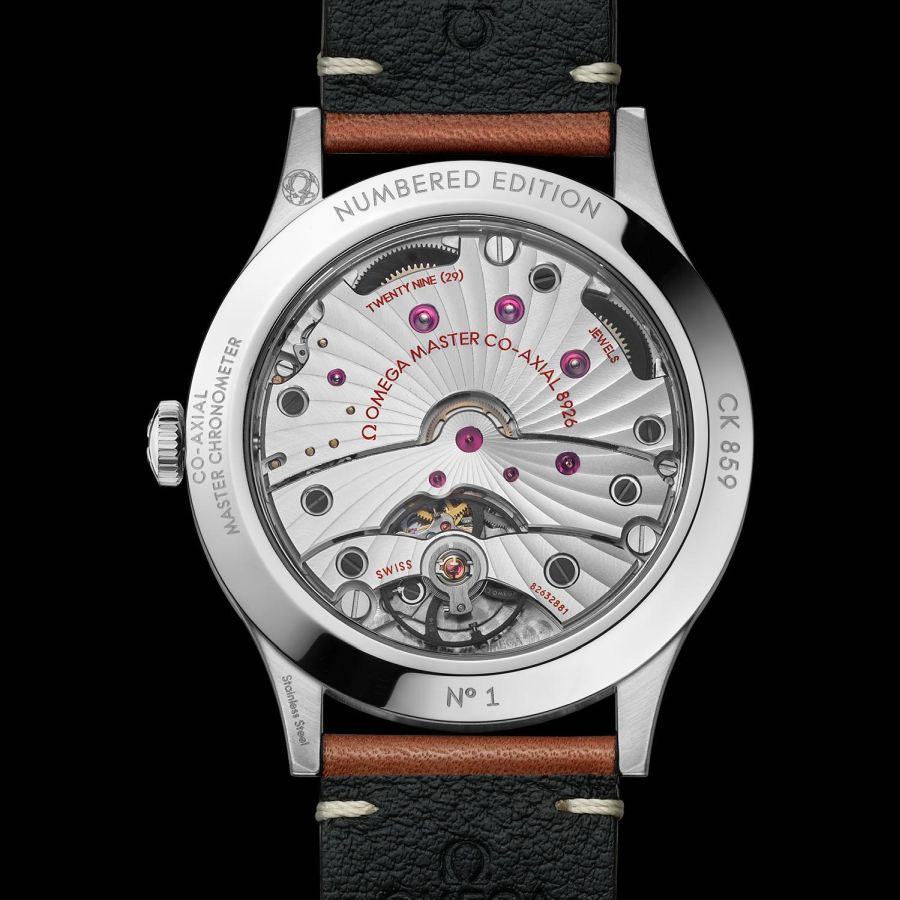