The Weird World of Watches for Young People 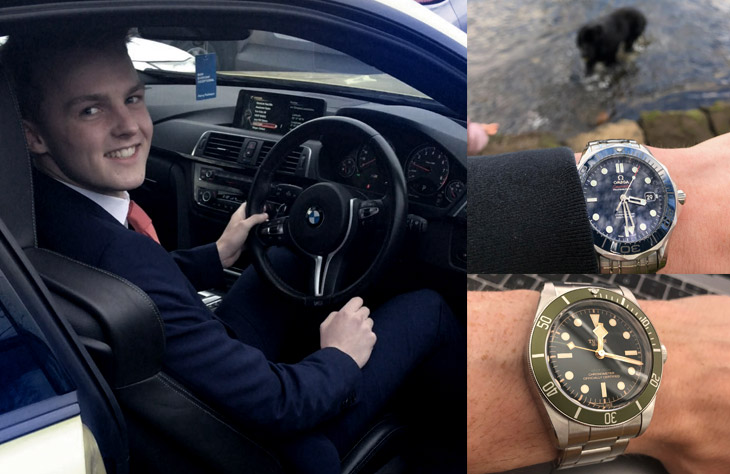 Why are watches not appealing to young people? They still need to know the time. However, in order to understand my thoughts on watches and why I’m qualified to speak for my generation, you must understand one thing – I am a young watch collector who is surrounded in a generation who don’t care for watches. 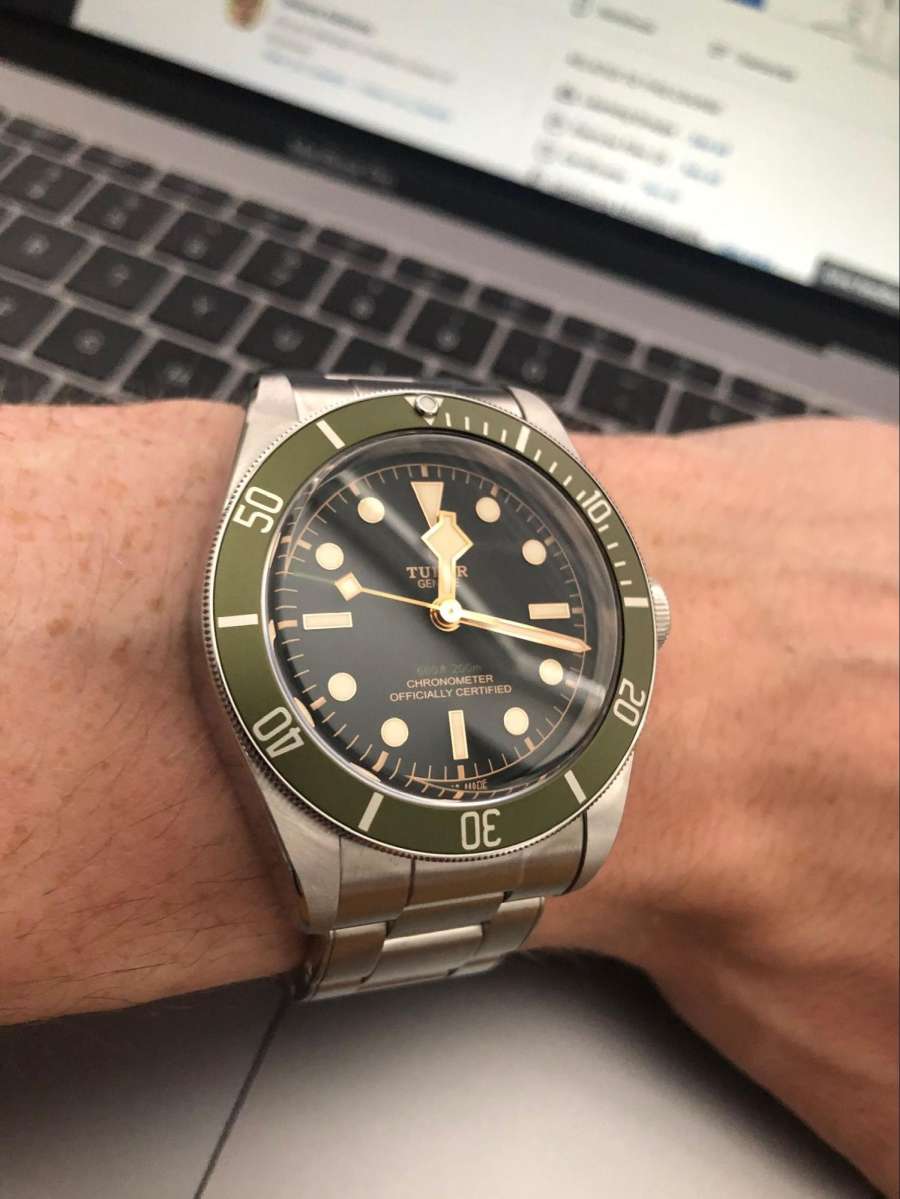 Watches are something I’ve been interested in since seeing Casino Royale when I was younger and then ultimately re-watching the older James Bond films really ignited my love for watches.

I am talking about a time in the franchise where the watches really were gadgets- the Omega Seamaster in Die Another Day where a laser fitted to the watch saved Bond.

The idea of the Bond watches having gadgets disappeared for a while but was thankfully reignited by the Bond Spectre watch in which it was a bomb. This ignited my passion and lust for a luxury watch. When I finally got a part time job in the 6th year of high school, I decided to spend my newfound income on something that would last a lifetime- a watch. I was comparing a Tag F1 Auto which was a mediocre watch, but I felt it was too common and I wanted something more special.

I had seen a BlackBay on Instagram and loved it but didn’t have the money for it yet. So, seeking somewhere I could have a proper look, I posted in a watch group chat and Rikki (yes, that Rikki – must have been a quiet day on tinder) said “Bud, check your local AD as they have a sale on”. I didn’t even know that Eric N Smith sold Tudor… for 50% off making for some incredible deals to be had and brought these watches into my budget. As such, I called, and they said the watches are flying out the door and so I got down there and had a few options. I ended up picking up a two-tone gold and steel glamour date day for £1242 (Not bad!). 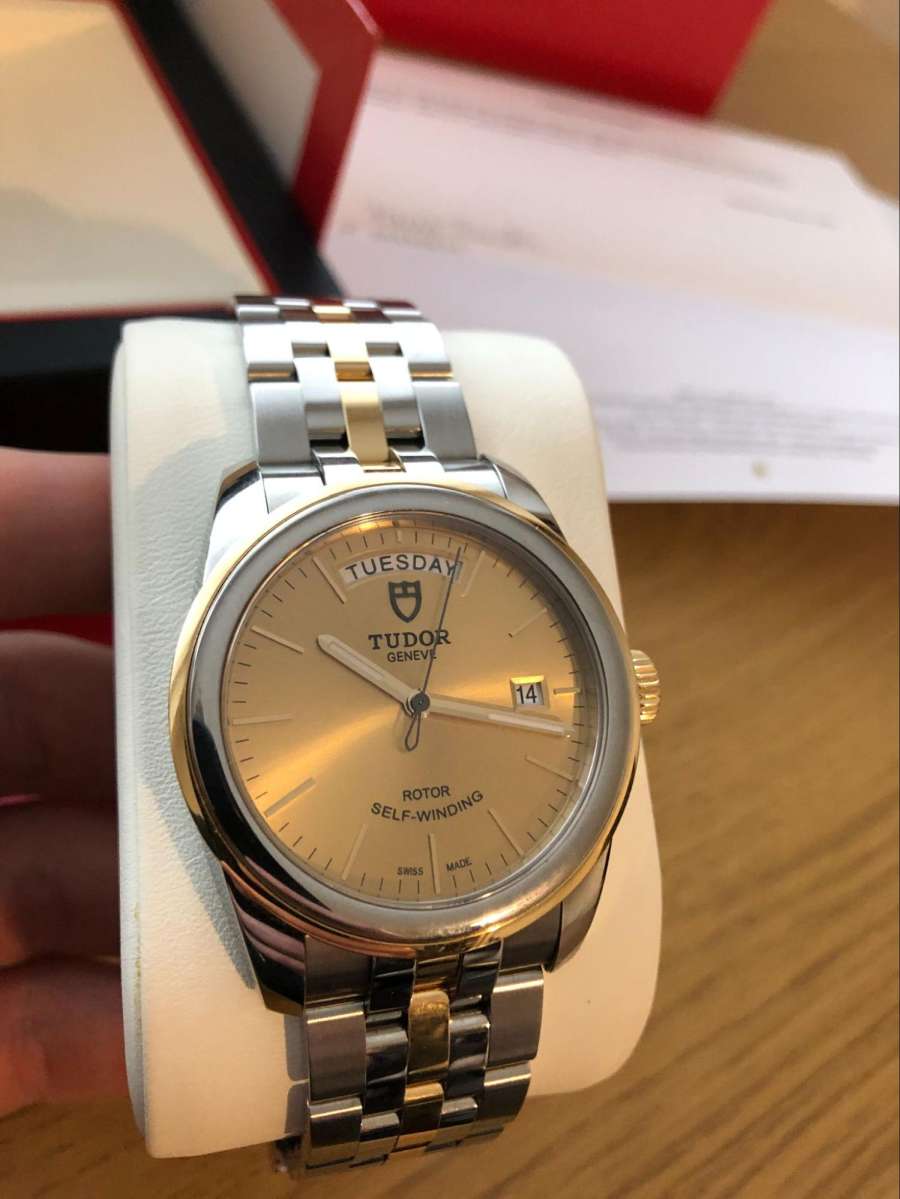 Of course, my start in watch collecting was before the Scottish watches was a thing, back in 2016/17 and so good quality watch groups really didn’t exist unless you went down the rabbit hole of watch forums but that doesn’t interest young people- we want information in a simple and easy to read format on a crisp website. Old style forums and websites don’t attract youth. This is often the greatest challenge that watch companies face- attracting young faces to the business.

The younger audience have this misconception that watches are just unnecessary and something rappers and their parents wear. Brands need to use their websites and retailers in order to appeal to the youth and make them realise that watches aren’t redundant. My generation’s parents typically had watches because their parents needed them as cell phones didn’t exist. This was then instilled in my parents as their generation got watches as celebratory gifts such as a 21st present. However, this simply isn’t the case anymore. 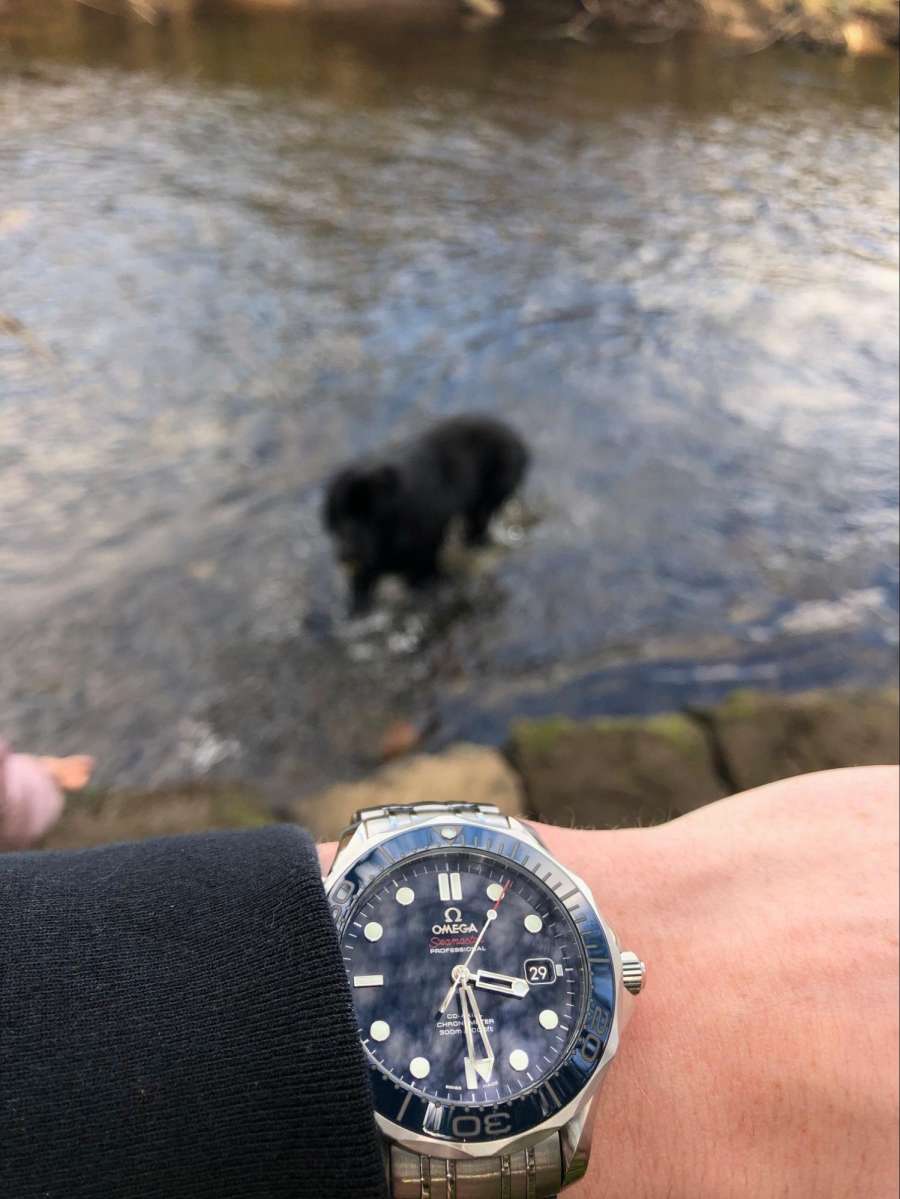 My thoughts on the current watch industry as a young person (21 now) aren’t as positive as my thoughts on the Scottish watches website-  I think it’s still an industry that isn’t ready for the younger generation yet and the problem is many of the top tier luxury brands aren’t appealing to the younger generation who will very soon be, their best potential customers due to a rise in disposable income. Instead, the younger generation are being targeted by the rise of the “shitters” who use a basic design, horrible movement and simple logo on an Alibaba watch who sell their products through social media marketing. Companies such as MVMT and Vincero watches appeal due to their clean, crisp marketing and work with popular influencers. However, traditional companies such as Tag and Tudor rely on the names of Senna and Beckham to shift watches- unfortunately those names don’t carry the same weight with the young generation as they used to. Traditional brands need to appeal to the younger customer, when you couple the yearly price increases as well as younger people not always seeing the value in luxury watches when you can “check your phone”, it results in a negative future for luxury watches.

Due to the rise in social media, brands such as AP, Patek and Rolex have risen in popularity with young people as their favourite footballers, rapper and celebrities wear and sing about them. This has led to young people only being interested in two categories of watches; the ‘Fashion’ watches such as the Hugo Boss, MVMT and on the other hand, the top tier luxury brands such as AP and Patek. Unfortunately, young people don’t typically have the means for brands such as AP, Patek and Rolex and so purchase the “shitters”.  This ultimately leads to the question of why young people don’t buy luxury watches but will purchase £900 jackets and £500 shoes while making close to minimum wage. Is it because they prefer to wear their money in a manner all will see? I mean, It’s easier to show off a jacket on social media- maybe the watch doesn’t have the same ‘Insta appeal’? I would hazard a guess that it is similar to the majority of my generation who will work all week in order to ‘flex’ a bottle of Grey Goose on Instagram. Is it as simple as a nice watch doesn’t have the same sex appeal as a bottle of vodka? Maybe. 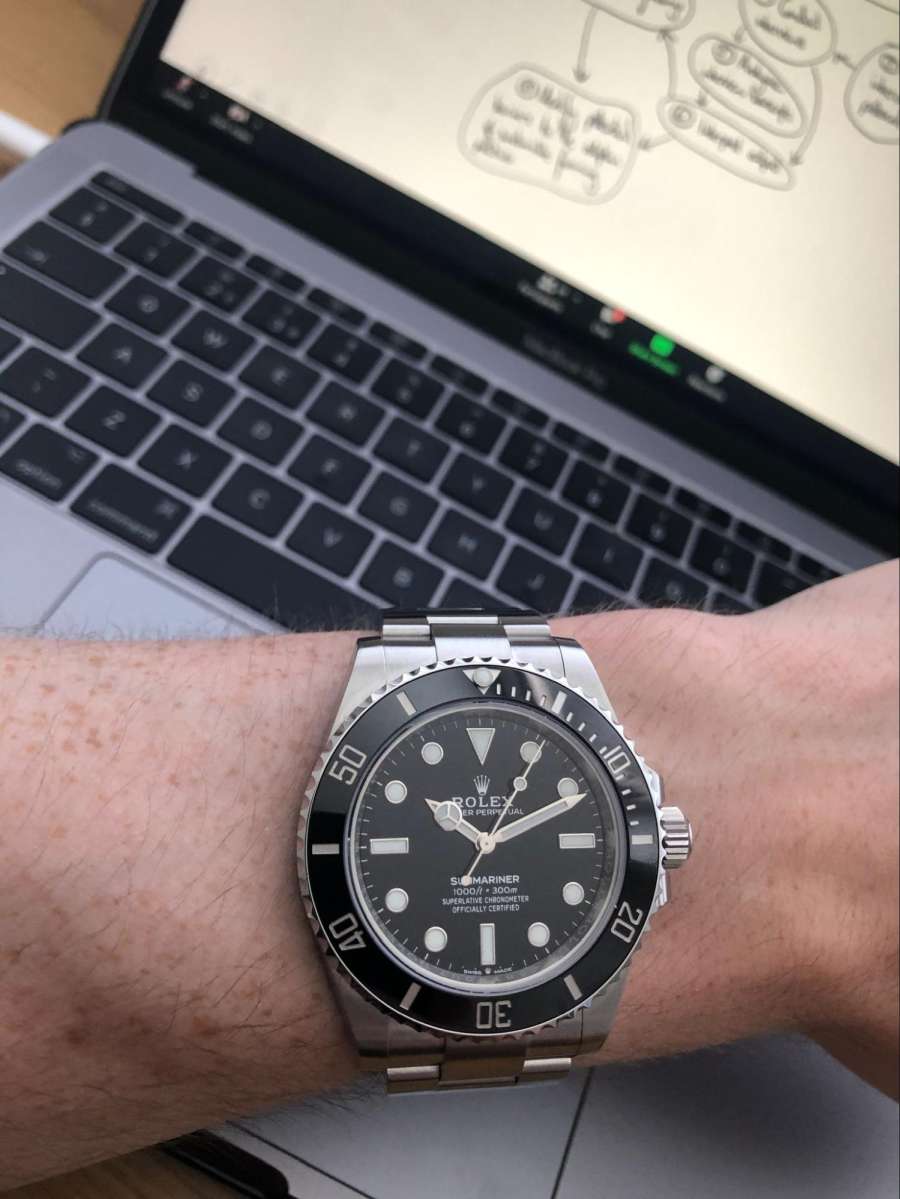 Another issue with the current watch environment is the watch retailers. At 18 when I was actually looking to buy my first watch, I found it off putting that nobody wants to chat to you at watch shops. I would have to actively seek someone to help and even then, they weren’t motivated to serve me, doing as little as they can in terms of effort. This is something that I also experienced when looking for my first Omega- a Seamaster 300M at age 19. No watch shop would entertain me or even let me try it on until I dealt with “Garry” at the Omega Boutique in Buchanan street. He actually listened to what I was talking about, explained the history of the watch, let me compare the colours and this lead to me purchasing it from him- if more people were like Garry and entertained younger potential customers would actually feel like their business was wanted. This leads onto my personal experience that watch shops don’t understand that a lot of people (especially young people) want a hassle free experience and get bored easily, we don’t want to jump through hoops to purchase- something I experienced when I dealt with another employee at a Boutique in Buchanan street. I saw a deal on their website but ultimately didn’t go for it as they couldn’t adjust the bracelet. When the shops reopened, I went in to enquire and as I was interested in the watch and the discount offered.

That day I was told to come in on the day that I was ready to do the deal and they would see what they could do, I obliged. I came in the next day with my father and they called their regional leader- he was unsure how to do it and so I was told to come back the next day. The next day came and so I returned with my father to be sent away again while they look into a deal. This time I was, again, told to come back the following day (Monday) and so we both took the following day off work to go and visit them after they were to ‘call’ to say it’s ready to go ahead. However, I never got a call to come in, so I had to chase it up and ended up speaking to someone who didn’t know what was happening. Later that day mid-afternoon I was called to be told that I would get a link to pay online.

Believe it or not, the link never came to my inbox. At this point I was sick of the experience, the people I was dealing with and as much as I wanted a SpeedMaster, I couldn’t be bothered dealing with an AD that wastes time. Since this point, I have been put off Omega and will purchase other brands. AD’s need to realise, and soon, that young people are used to Uber, JustEat and iPhones- everything they want at their fingertips. If you make a young person do X, Y and Z in order to get a watch then they will do as I did- cancel the deal and send their friends elsewhere. 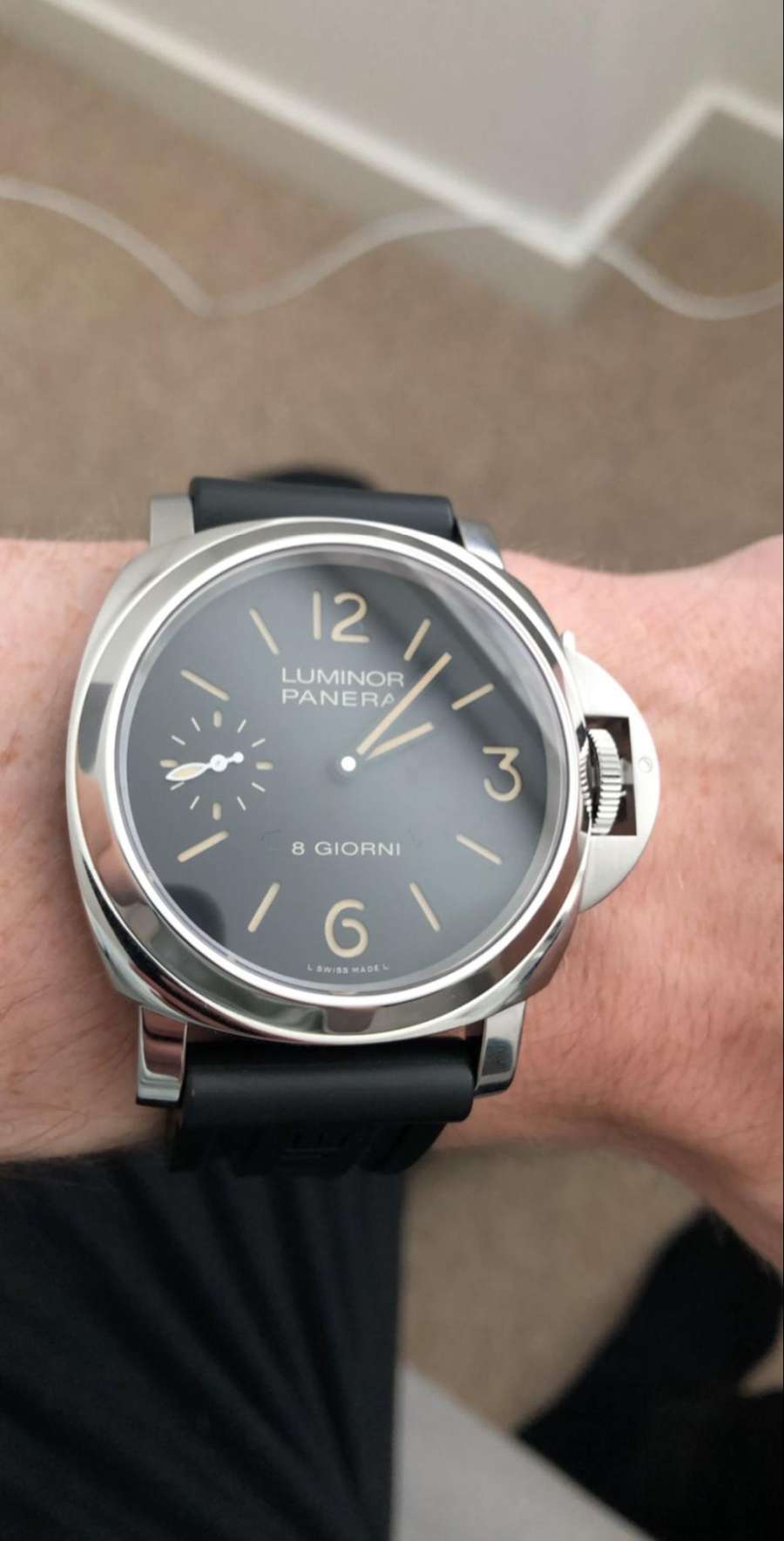 If you only focus on the underlying key issues within the article then you might think the we are looking at the car industry, some of the practise sounds very ‘Ferrari”. The difference between the watch industry and the car industry however is that there’s something special about Ferrari, they have a brand that there’s almost no substitute, most boys will dream to at one point own a Ferrari and when they are men seek to fulfil this dream. When it comes to watchers however, there’s competition. There is a brand that makes great products, is already part of the majority of youngsters’ life’s and is known for great design- Apple. It’s cheaper, easy to finance, available at most retailers and from a brand that is already a part of most people’s lives. Not only tells the time but also lets people who love to always be connected to the world, be connected.

( Ted also appeared in his very own episode of the Scottish Watches Podcast so now you’ve read his words hear his story with a few more terrible tales from the retail world here – http://www.scottishwatches.co.uk/2020/11/26/scottish-watches-podcast-207-ted-talk/ ) 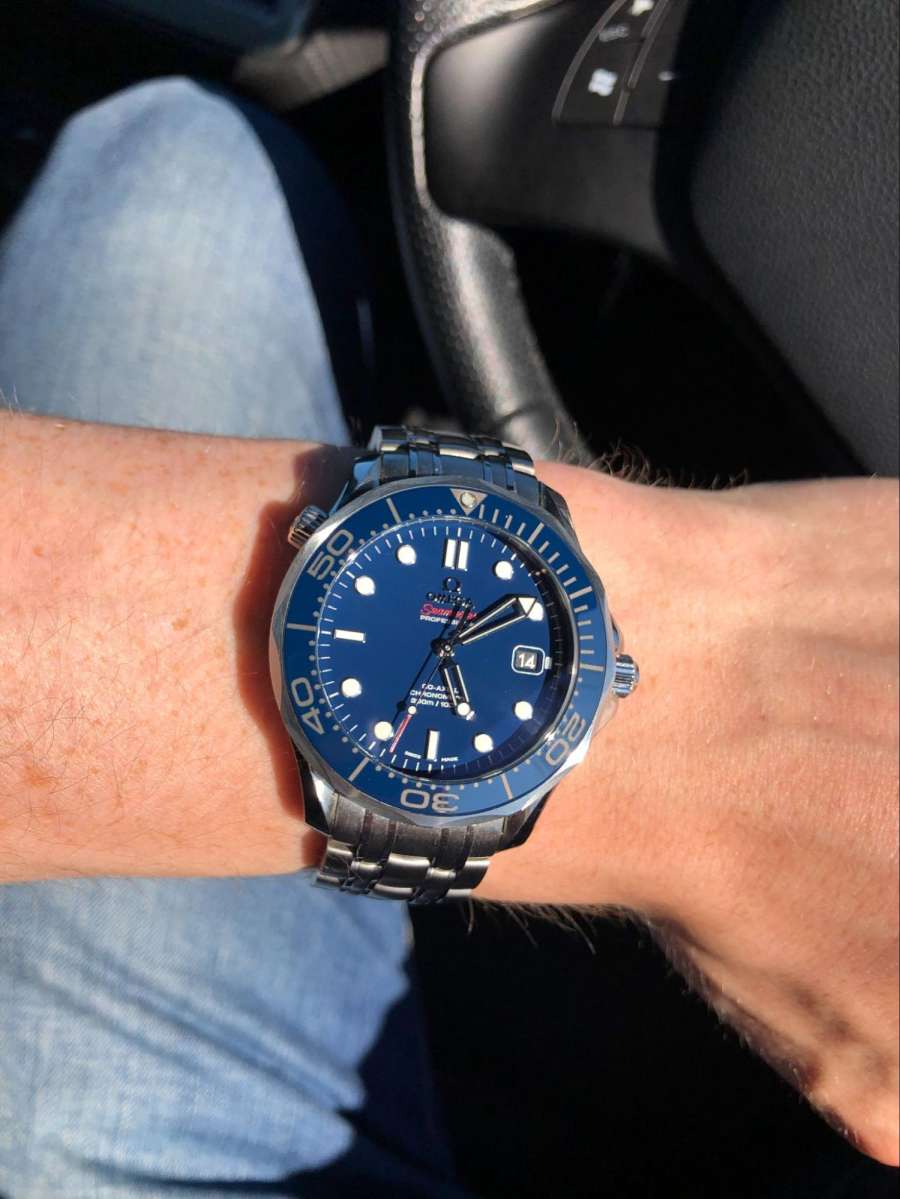