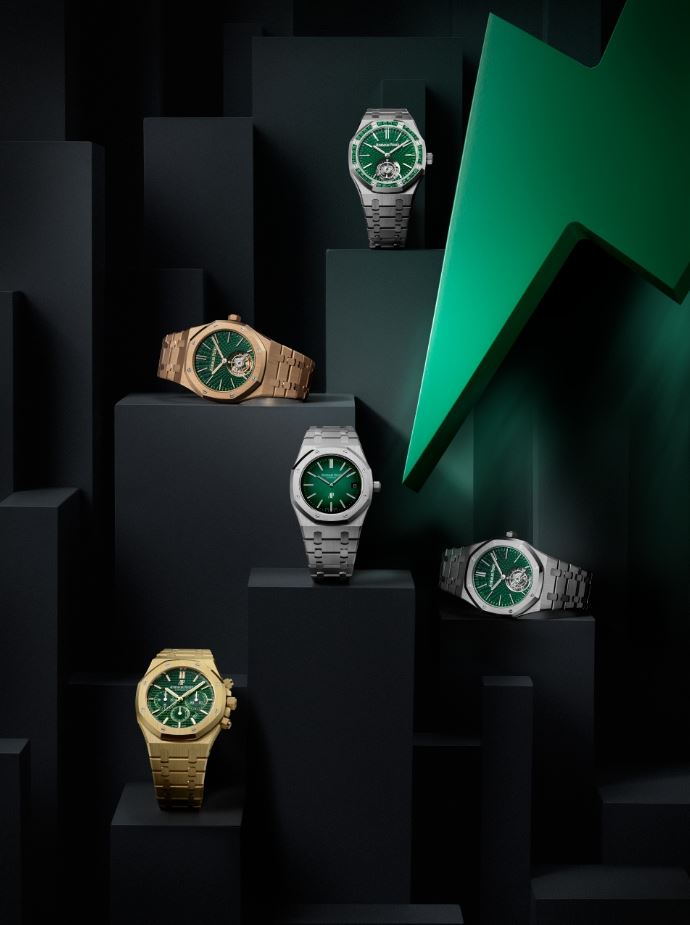 In the current climate where large physical gatherings are still non-existent and most marketing has to be digital and on social media, I at times wonder why brands do not spread out their releases more. Of course, I can’t complain because any week that’s packed with as many releases as there were this week, is a good week. This week, we’ve had Audemars Piguet teaming up with Marvel while also releasing a couple of new watches, Blancpain releasing a “No Rad” Fifty Fathoms, Piaget releasing its Skeleton Polo and Doxa releasing a whole collection of carbon watches. These are the top 7 things in the world of watches last week. Let’s get into it. 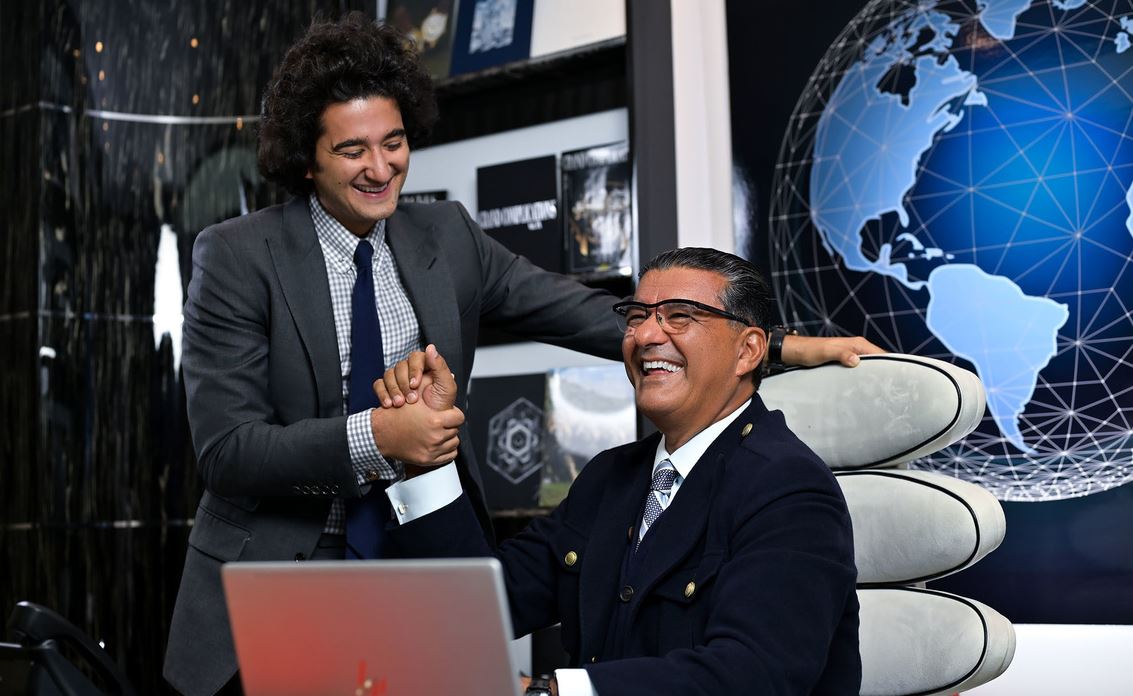 Jacob & Co. has just appointed a new CEO, none other than Benjamin Arabov. His father, Jacob Arabo of course founded the brand. However, Benjamin Arabov’s resume would have been more than sufficient to qualify him for the post given that the young entrepreneur (only 28 this year) has set up and successfully managed his own digital marketing firm in the education sector and was named in Forbes 30-under-30. While he re-joined Jacob & Co., in 2017 and took over the social media marketing of the company, his appointment to CEO now reflects the brand’s renewed focus on digital marketing that has taken become far more essential to Swiss watch companies in the past 12 months. For more on his appointment and the future direction of the company, check out articles on Watchonista and Monchrome. 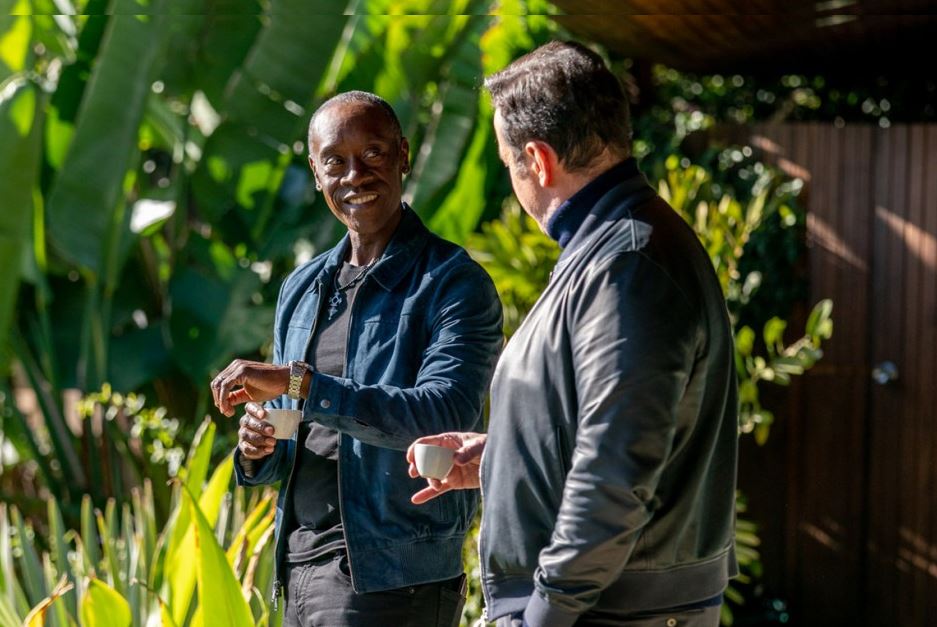 It is not often that I get to talk about two of my favourite hobbies at the same time, but this week I can because Audemars Piguet has just announced the start of a collaboration with Marvel. Taking inspiration from the Fantasy Watches of Gerald Genta including pieces that sported Disney’s Mickey Mouse, Audemars Piguet sought to pay tribute to the current generation of pop culture heroes. And there isn’t many bigger icons than Marvel, which has taken the world by storm in the past 13 years. Avengers Endgame, for example, up till very recently held the biggest box office record at US$2.8 billion. The foundation for this collaboration was laid in 2017 as a result of the friendship between Audemars Piguet CEO François-Henry Bennahmias and Don Cheadle, the Marvel Cinematic Universe very own War-Machine. That is now about to come to fruition with specific details to be released sometime in April 2021. It would be interesting to see how much inspiration any watch released takes from the Marvel movies, a Hulk Royal Oak anyone? Till then, check out this fun video on this collaboration. 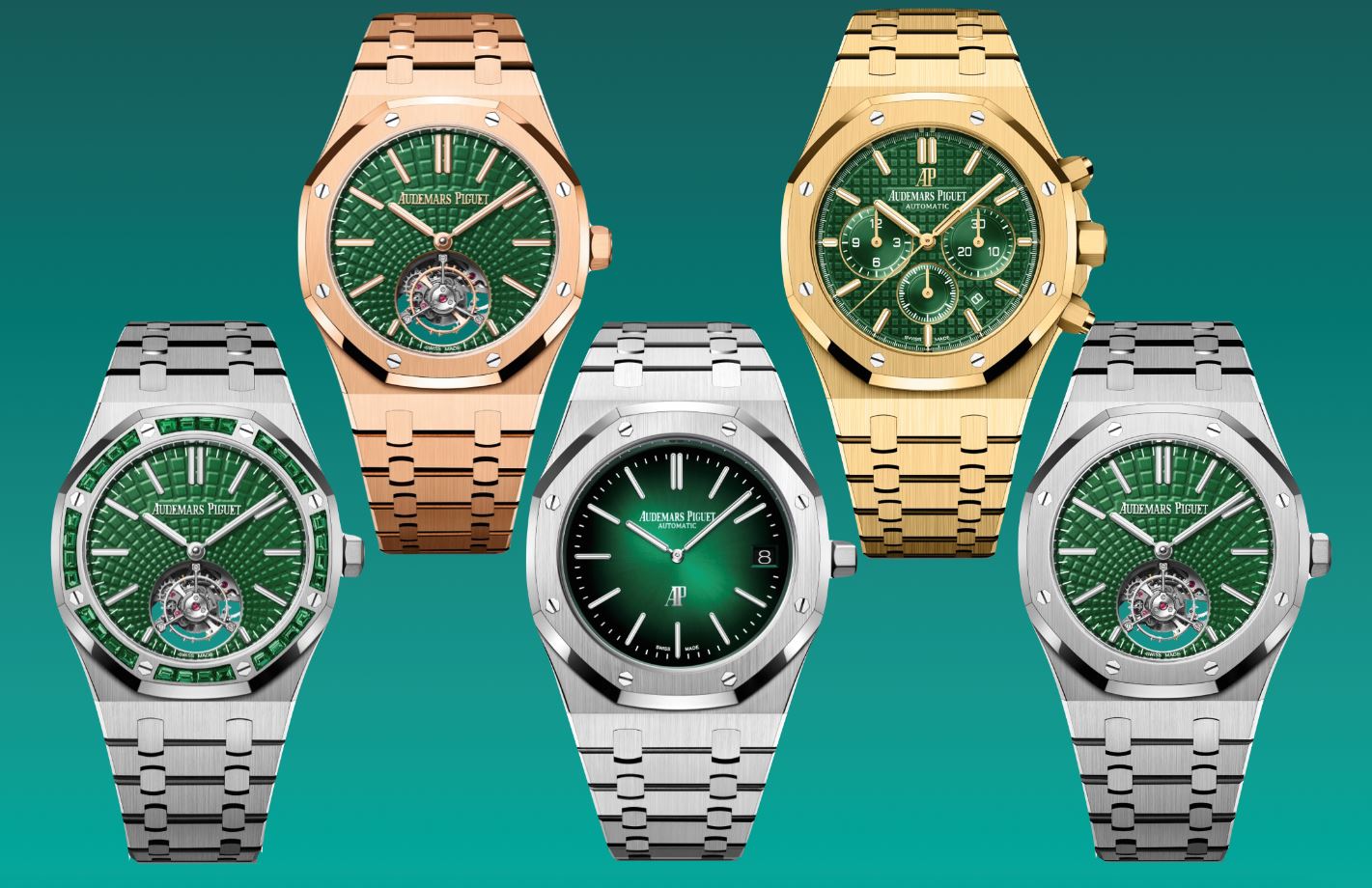 Speaking of Hulk watches, Audemars Piguet has also released 5 new Royal Oaks that feature green dials. The first of which and likely the most popular, is a new Royal Oak “Jumbo” Extra-Thin (ref. 15202) that has a remarkable green  fumé dial. Its material of choice, platinum, which keeps the current Jumbo offerings in steel to only a single model, one that features the widely popular blue dial. The stand-out of the releases though, is the Royal Oak Self-Winding Chronograph (ref. 26331), and comes in a yellow gold case. The last time the brand opted for such a combination was in 2015, in its collaboration with The Hour Glass. It is a brilliant combination in my opinion, as the yellow gold really allows the green Grande Tapisserie dial to shine. The remaining three Royal Oaks are tourbillon models, two of which are housed in titanium while the final piece comes in rose gold. One of the titanium pieces also features an emerald-set bezel. All three sport dials that have the iconic tapisserie dial but angled such that they radiate away from the tourbillon. Overall, it is certainly interesting that the brand opted for the use of green in this collection, especially since it is a colour that the brand has rarely chosen. Perhaps green this year is last year’s blue? 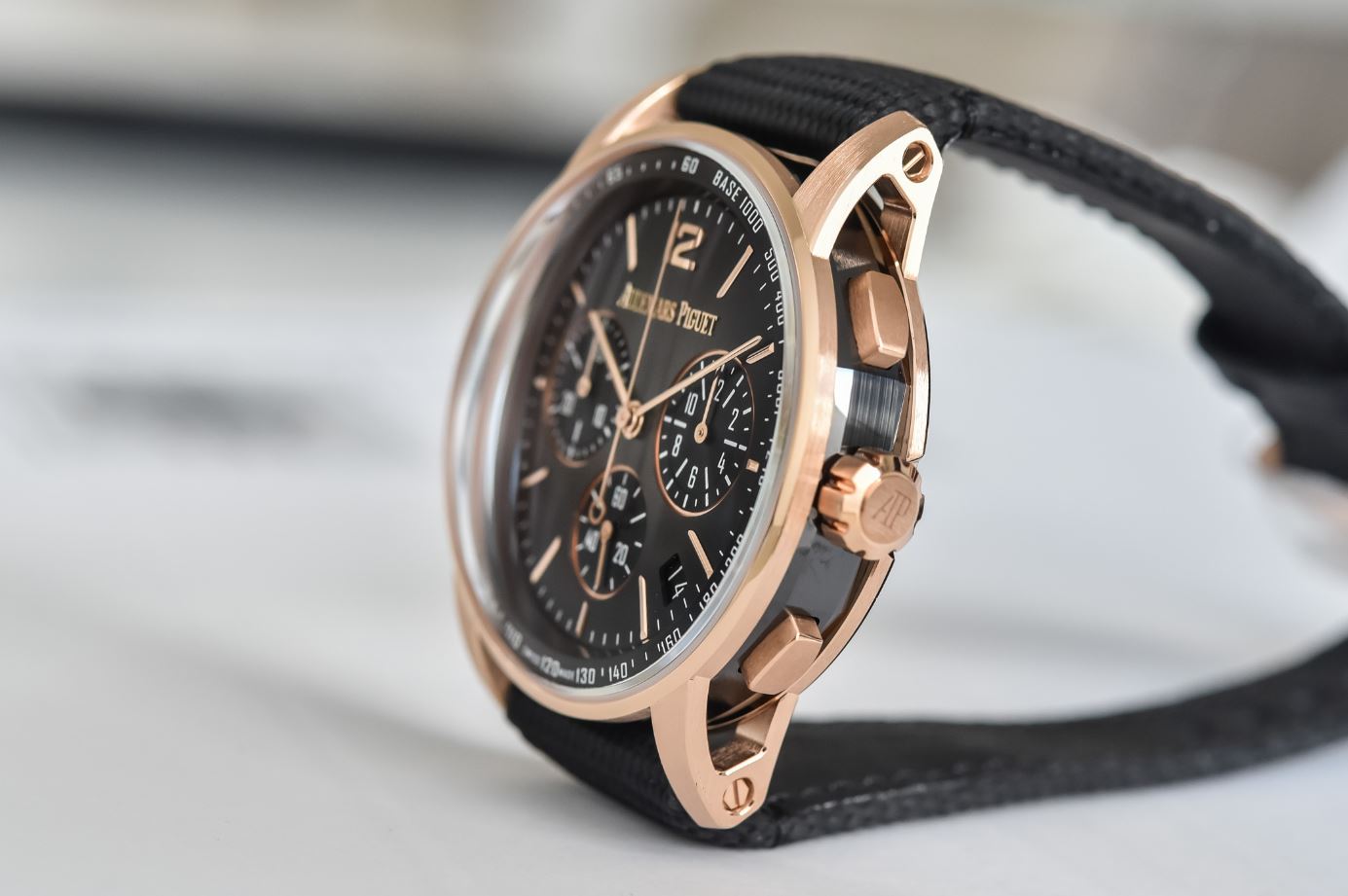 Audemars Piguet did not just stop at the Royal Oak line, in its releases though. It also released a brand new Code 11.59 Self-Winding Chronograph. The Code 11.59 has had mixed reactions since its initial launch at SIHH in 2019. However, over the past two years, it has laboured to reshape impressions of this line-up with some success in my opinion. While this latest release does not address some of the initial complaints about the dial, what it does do is carry on what the brand seems to have launched this line-up to do, innovate. This innovation is evidenced by the intriguing use rose gold for the outer case and ceramic for the mid-case. This interesting combination of materials has been paired with a smoked dial which, though has been used before, now features vertical brushing instead of the usual radial finish. Another first, for in the Code 11.59 series is the use of a fabric strap that sits this release closer to the casual side of things. The Code 11.59 has served to be a playground for the brand to try out some its more ambitious ideas, and that has not changed with this release. I for one am really interested to see how the mix of rose gold and ceramic changes the balance of the watch on the wrist. 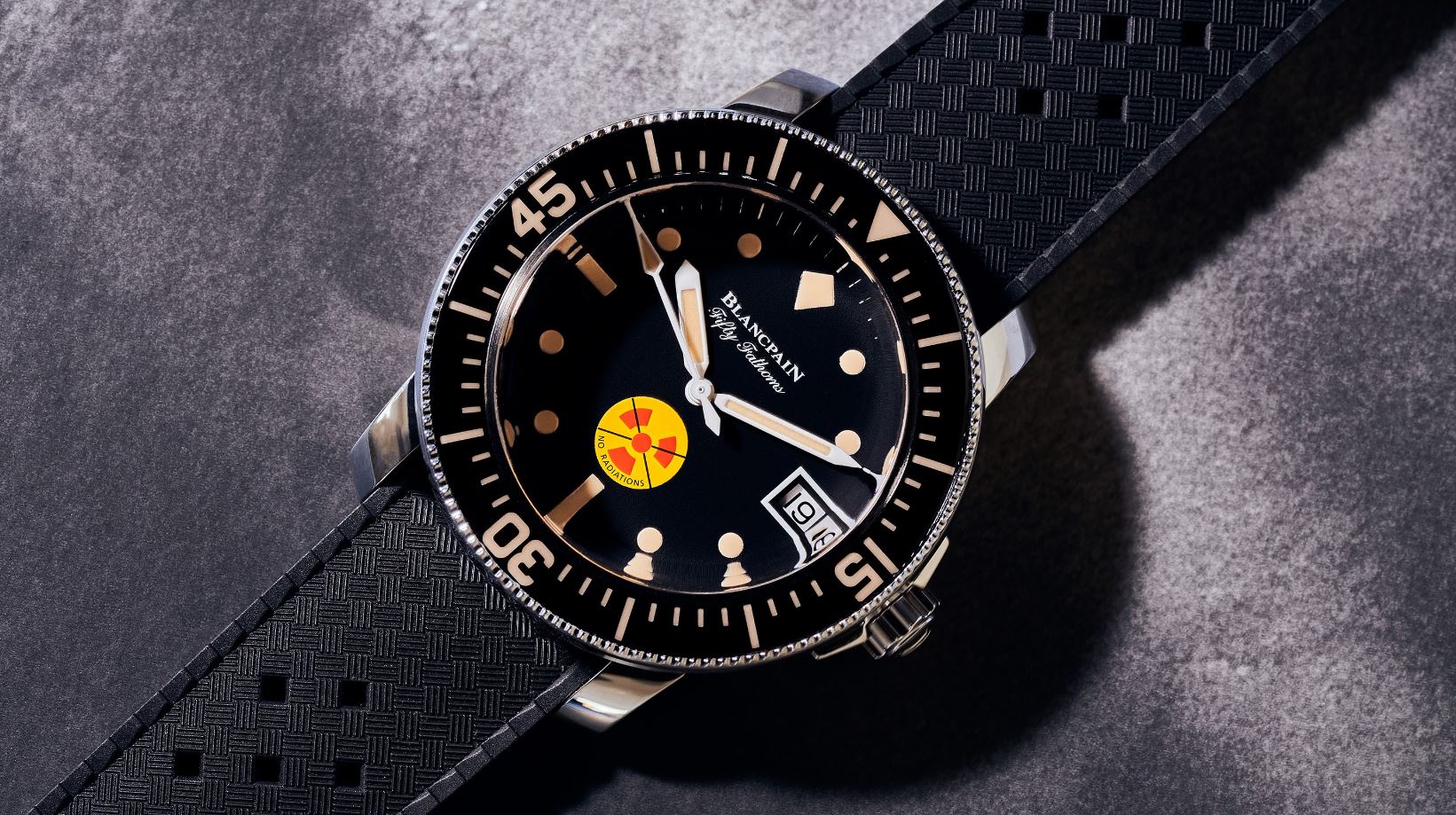 In the 1960s, one controversial topic that came up was the use of radium to create a dial with luminous  indices. On side note, do check out Radium Girls that is available on Netflix in some countries. While we can look back on the whole account with intrigue now from the safety of our times, it must have been extremely trying for many of the ladies that were put through dealing with the effects that being exposed to radium brought about. That said, as these effects came to greater light, Blancpain eventually rectified the situation and eliminated the use of radium from its watches. Of course, to ensure that this was accurately broadcast to its consumers, the brand chose to slap on a “No Radiation” symbol on the watch, something that certainly makes the watch quirkier but also something of a collector’s dream today. Well, Blancpain has now released a reissue, this time in a more wearable size, 40.3mm, as opposed to an earlier reissue from 2010 that came in 45mm. Fauxtina detractors will detest this piece given that it is heavily used on the markers, hands, and bezel markers, but in my opinion it works really well especially for a vintage reissue like this. This watch captures the essence of what vintage reissues should be, nailing the look without compromising on any of the modern functionality that comes with the use of modern materials. One standout example was the use of sapphire on the bezel insert that features a dome to created that magnifying and distorting effect to the markers. Overall, this piece was a great released from the brand and likely to become a collectible in its own right, especially given that it is limited to only 500 pieces. 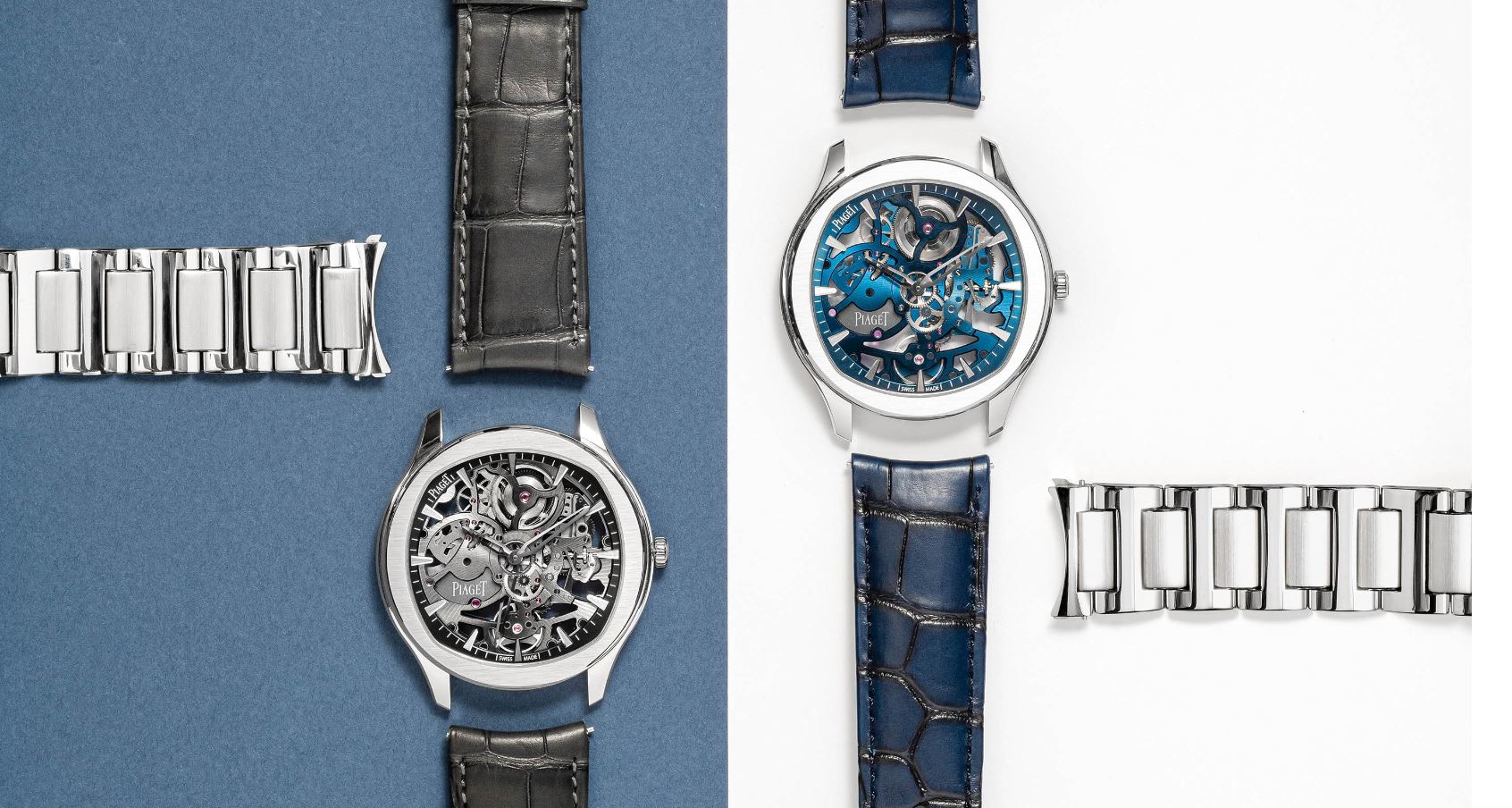 For any bumped that they can’t get the earlier mentioned Royal Oaks either because of its limited availability or exorbitant cost, might be encouraged by a more affordable alternative also launched this week. That alternative comes in the form of the Piaget Polo Skeleton, which has its own historical pedigree stemming from 1980s. Piaget over the years has also established itself as a watchmaker to be reckoned with having set records for the thinnest movements available. While this doesn’t feature that, this watchmaking prowess comes to for with this iteration of the Piaget Polo coming in at only 6.5mm though admittedly it is wider, coming in at 42mm. By comparison, the Royal Oak Jumbo Extra Thin measures an larger 8mm. The skeletonised dial in this release also allows fans to enjoy the intricacies of the amazing movement produced by the brand. As an added bonus, the watch comes with two extra straps, one leather and one rubber, besides the bracelet that the watch comes on. And to save consumers the hassle of getting someone do it,  this watch also comes with a tool-free, easy switch system for the straps. For those interested, this watch retails at US$28,500 and is a regular production piece. 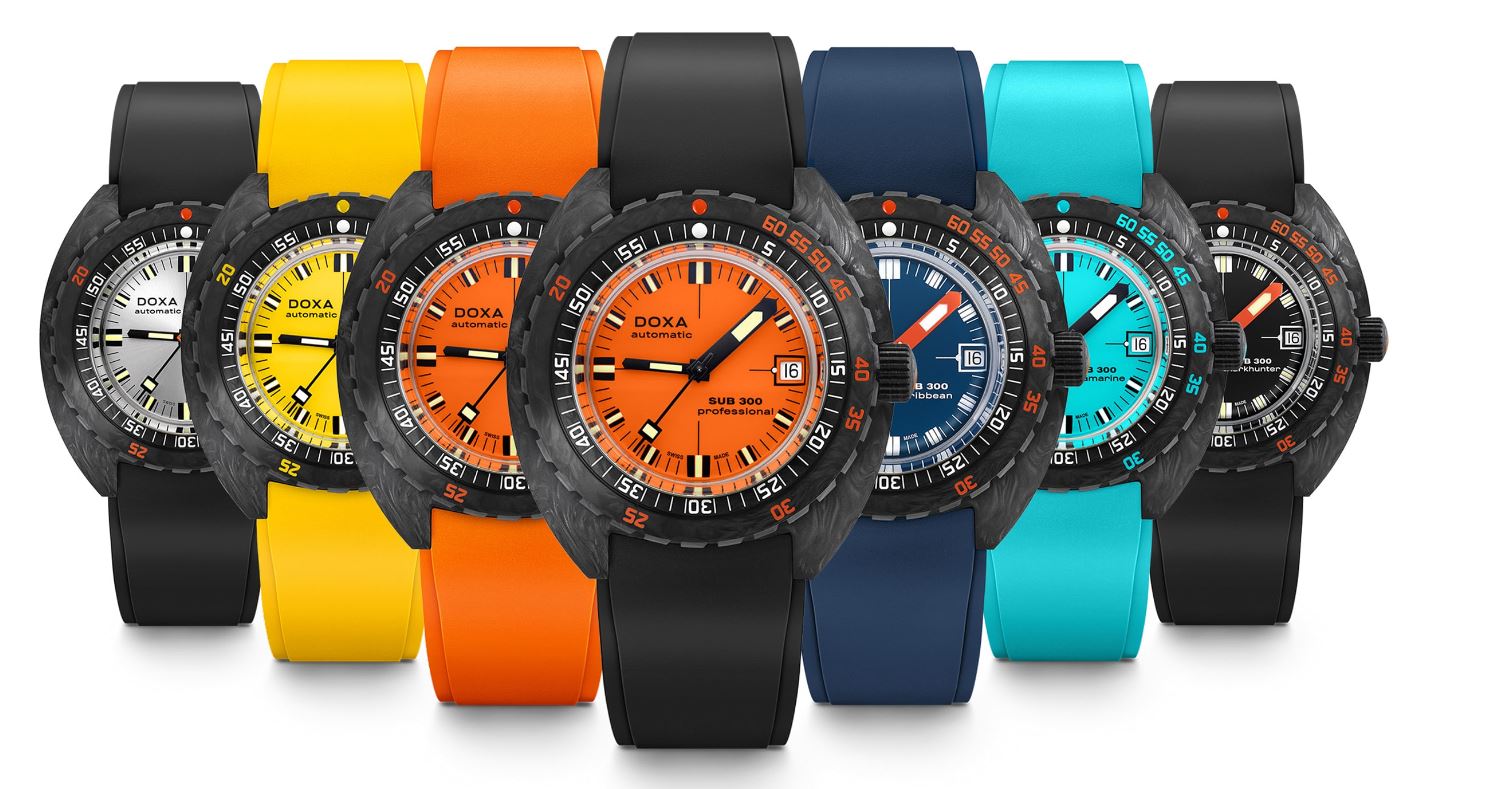 Finally, this week we also have an entire line-up of forged carbon watches from Doxa. About a year ago, Doxa released a Sub 300 Carbon Aqua Lung US Divers Limited Edition watch that was basically a regular Sub 300, but in forged carbon and on a rubber strap. Now, the brand has expanded on that amazing looking watch with 6 dial colours, in orange, navy, yellow, turquoise, black and silver. The series also provides a choice of rubber straps on some that combine to give a total of 10 choices. Of course, the orange yellow or turquoise have to be the options and are perhaps more easily associated with the reputation of the brand.  While purchasers of the original limited edition last year, may understandably be a little peeved that Doxa has not released this regular production series, most other fans would find this series a really fun addition to the brand’s line-up. These watches would certainly make for fun watches that are worn to the beach during summer (and its always summer here in Singapore), or at least worn while dreaming about the beach from the comfort of our homes. More a more in-depth discussion on these releases, do check out one of the recent Scottish Watches podcast with James Landen and also a write-up by our very own Derek Haager (@derekhaager). 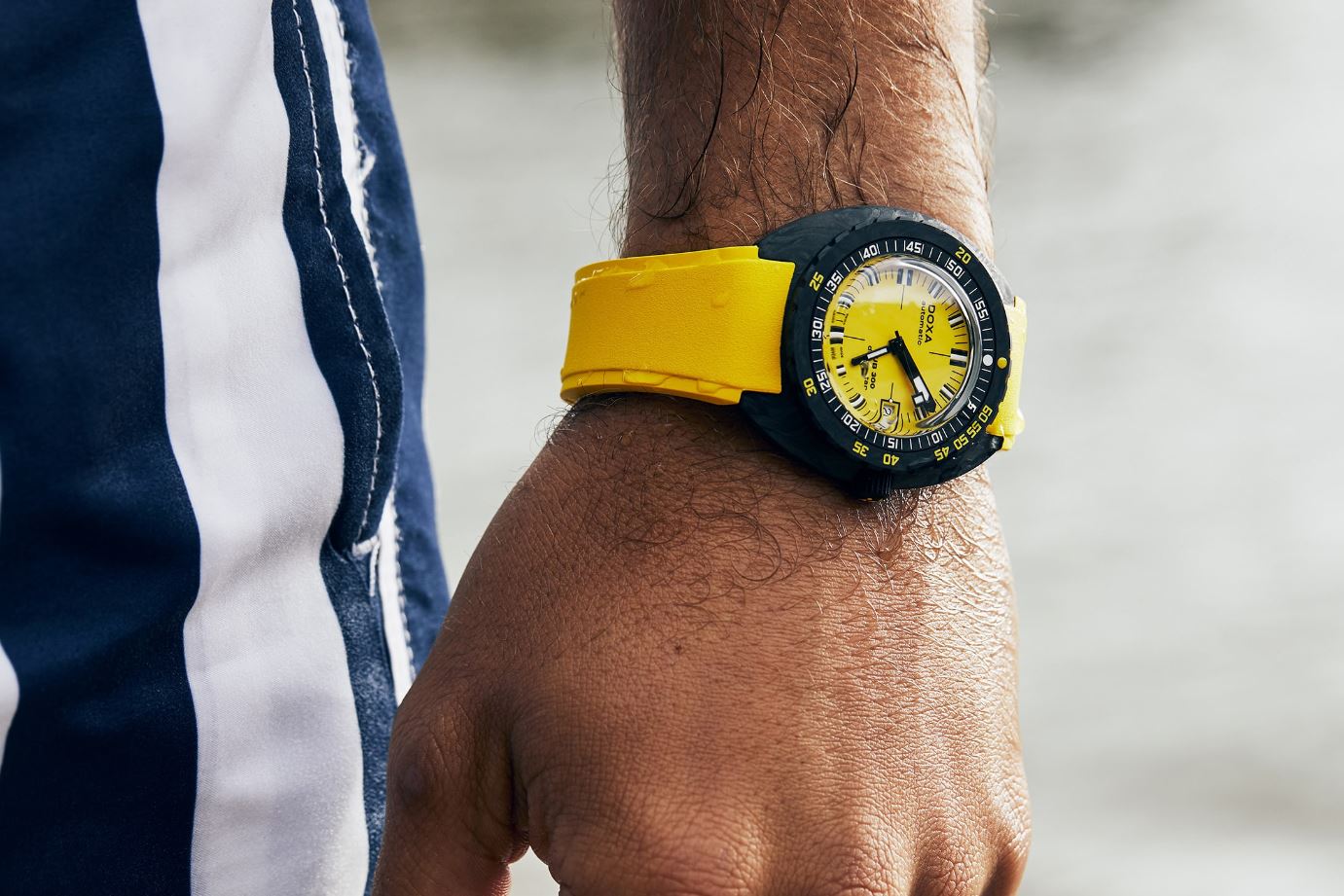