Super Compressor! It sounds like a feature from a Harley Earle era Cadillac featuring acres of chrome and tailfins to die for. As a watch enthusiast I was supposed to know it referred to a type of water resistant watch case. It just goes to show how quickly a technology can become obsolete and fade into obscurity, especially when its originator falls into bankruptcy. Why would Christopher Ward decide to resurrect this technological oddity and is it a good watch? This is a review of my own so you can assume I like it, but will you?

Ervin Piquerez SA (EPSA) first developed the compressor case in 1956. It was an attempt to improve on the water resistance of watch cases by designing the case such that it became more water resistant as the water pressure increased. The design was developed into the Compressor 2 and the Super Compressor which included an additional spring to help spread pressure evenly around the gaskets and allow the case to decompress more easily as the watch ascends. EPSA were a case manufacturer and the case designs were used by a number of watch manufacturers such as Jaeger-LeCoultre, IWC, Blancpain, Longines and many more (Worn and Wound, A guide to Super Compressors March 2014).

Recently the classic compressor design featuring an inner rotating bezel and two crowns at 2:00 o’clock and 4:00 o’clock have become popular again featuring in watches by Farer (Aqua Compressor), Bremont (MB III) , Christopher Ward (C8 UTC) and many more. None of these watches have gone the whole hog and adopted the key technology using the spring and retaining ring. 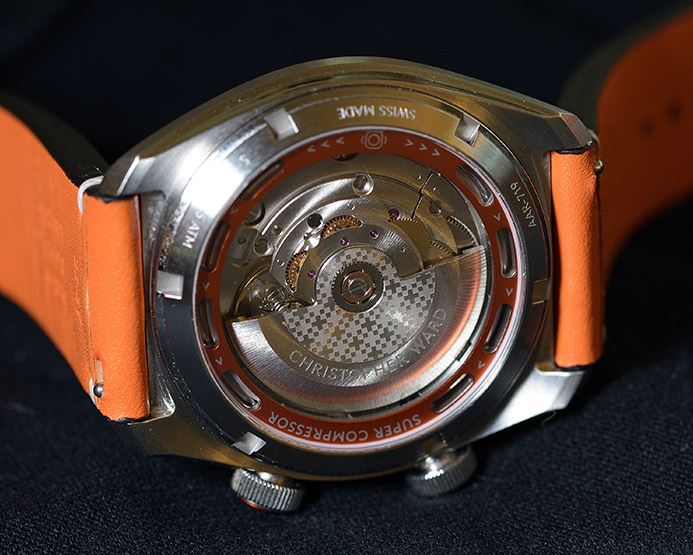 The movement is a based upon a Selitta SW200-1 and is handwinding and automatic and hacking. There is no date wheel and no phantom date position on the principal crown at the 4:00 o’clock position. This watch is not COSC certified but in my hands has gained 3.5 seconds a day which is excellent performance.

The C65 retro diver range has been available in various forms for a few years now. When the range was originally released it seemed to be a direct response and even homage to the Oris Divers Sixty-five line. In the preceding years CW have developed the C65 range and have been very creative in introducing new watches and developing the line’s design language.

For the C65 Super Compressor, CW have developed the case shape even further. For this model the case has become much more “cushiony” with broader lugs giving the impression of the classic cushion shape. It doesn’t go as far as the Omega Speedmaster Mk II but the new case shape is a departure for the C65 range and it will be interesting to see where else this case shape shows up in the future. 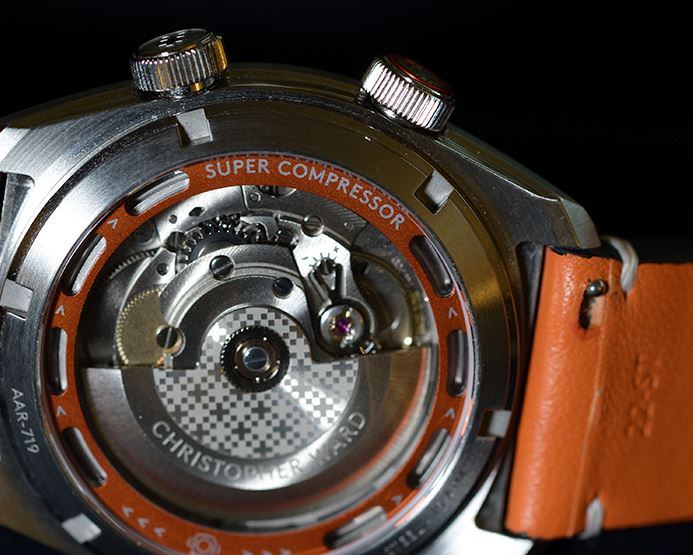 The case features elements of CW’s light catcher case design with a mixture of brushed and polished surfaces. The depth of the watch is reduced by the curving swage line which runs from one lug to another passing through the two crowns. The top crown at 2:00 o’clock controls the inner bezel, is cross hatched and ringed with an orange circle. The cross hatching is a subtle nod to the historic EPSA case designs. The watch is controlled by the bezel at 4:00 o’clock controls the movement. In another departure from the C65 range the main crown is now a screw down clown. CW claim that there is no real need for this a screw-down crown at this depth rating but it has been a popular demand from CW fans for a couple of years. It’s good to see CW responding to customer requests. 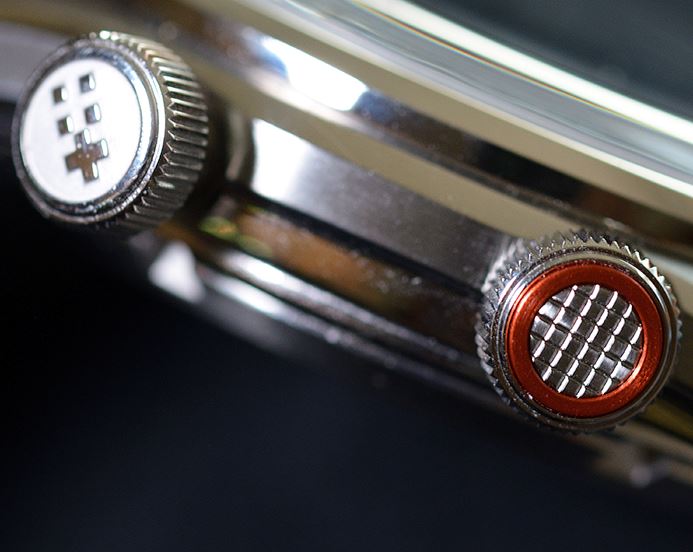 The second crown features the twin flags logo embossed in the end. The machining of the twin flags logo into crown sometimes means that your fingers feel a sharp edges of the logo when brushing past the crown. This is an odd tactile dissonance compared to the smooth lines of the case especially now it contrasts to the cross hatch finish of the upper crown.

The hand set is very simple and traditional. The hour and minute hands are simple batons. The hour hand is polished steel and the minute hand is painted orange. The second hand is orange tipped with the Trident counterweight on one end and a small square weight at the tip of the minute hand. The hand set looks like a refined version of the hands on a Doxa Sub 200 and is very legible. 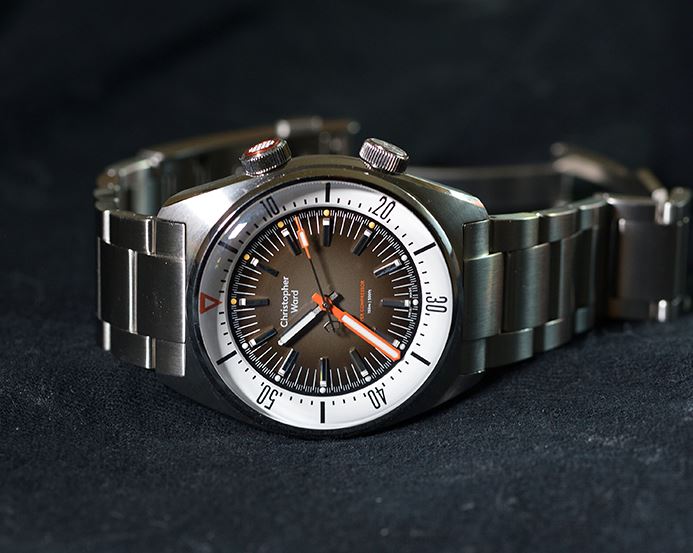 When I first saw the watch I was worried that the dial would be lost behind the bezel. The inner diameter is 36 mm and the bezel consumes 5mm of this on each side. The long indices mean that the word mark would not fit at the 9:00 o’clock position. The indices themselves are long and slender with small dots of lume at the end of the index and a notch filled with white lume. The lume dots at 12, 1, 2, 3, and 4 o’clock are painted with a mustard, yellow lume whilst the rest of them are white. 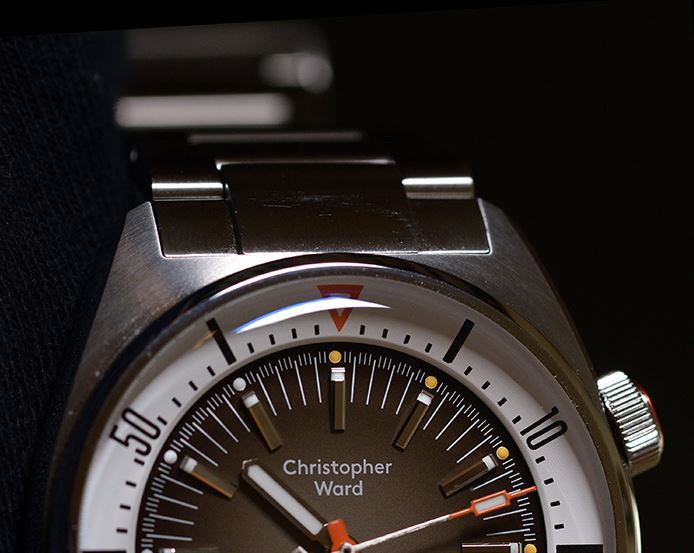 The font on the bezel is tall and slim and looks like the font used on pressure gauges; a nice touch.

The lume is very good but the hands are slim and the dots above the indices are very small. It’s no lume monster but what lume there is very bright and much better than CWs of the past. 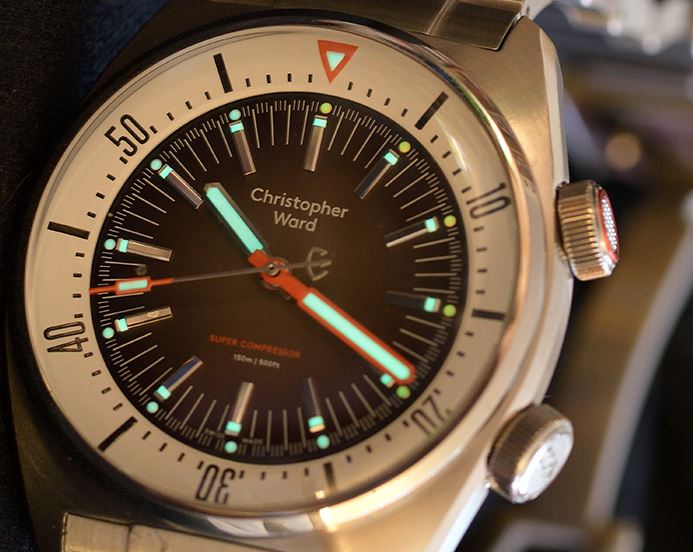 The Black Sand dial itself is a lighter brown in the centre fading to a darker brown as it extends under the indices. It’s a quite hypnotic dial to look at and helps to give the watch a very autumnal feel especially on the orange leather strap. It’s also available with an ocean blue dial which features a strong sunburst effect. This is a much bolder dial compared to the black sand dial and I don’t think it suits the watch as well as the more muted, subtle black sand dial.

The C65 Super Compressor is offered on a brushed bracelet which features quick release pins and push-button micro-adjust. It’s very comfortable and has the “Rolex squeak” indicating tight tolerances. It’s also offered on black tropic, camel vintage leather, and blue or an orange tiber leather straps. I do like a dash of orange and fell for the orange strap immediately and so bought the strap when I bought the watch on the bracelet. Inevitably with a leather strap it doesn’t quite fit and I need a hole between the third and fourth holes for it to be fully comfortable. As of now I have resisted the temptation to punch another hole in the strap (this never goes entirely to plan) and wear it slightly loose on the fourth hole. The straps also come with quick release pins. If you change straps often and buy a CW strap with QR pins please note that the spring bar is captive within the strap. If you want to put another strap on it you will need your own spring bars.

Vanity engineering and that case back

This is a project that Christopher Ward didn’t have to do. When I first heard rumours of a Super Compressor watch I didn’t understand why everyone was so excited. Now I get it. If you’re going to resurrect an obsolete technology you might as well show it off. The other star of the C65 Super Compressor is the case back. No 1970s dive watch had a sapphire case back. They’ve only been mainstream for a couple of years and the C65 case back is another stunner. 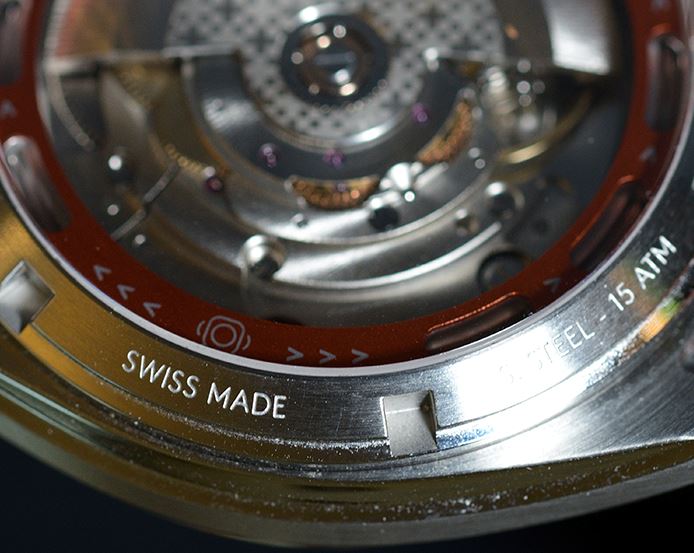 The back is dominated by the retaining ring used to hold the spring in place. In keeping with the Super Compressor tradition there is a representation of the diving bell helmet used by Ervin Piquerez on their super compressor cases. The case back is the unseen icing on the super compressor case showcasing the Selitta SW200-1 with the rotor decorated in the Christopher Ward twin flag motif.

There are always some niggles with any watch. The “Black Sand” dial colour is unusual and doesn’t show well in renders. The blue version is apparently much more popular than the black sand and so this variant might not last too long. My watch is from an early batch of watches. It has the misaligned red text. This was a mistake that shouldn’t have got through QA. The main crown at 4:00 o’clock is a bit awkward to operate as it is countersunk into the dial and at an angle from the case. It took my stubby fingers a few attempts to become used to it. I like watches with date windows and this watch doesn’t have a date window. I can see why the design might restrict the placement of a date window but I miss it all the same.

I wasn’t very excited about this watch even after I saw it in Christopher Ward’s in-house magazine, Loupe. It was only when I saw it during a virtual showroom visit that I grew to like it. I am in the minority in preferring the Black Sand variant.

It is a retro diver which contains a resurrected technology and wants the world to know it. It shows what small brands can do when they put their minds to it and that CW can throw some serious engineering at their products. It has some lovely details hidden among the engineering and pays proper homage to EPSA watch cases of the past. Yes, it’s vanity engineering. Yes, it’s an obsolete technology but it’s also a thoroughly modern in execution, reliable, great to look at and easy to wear. For me it’s a surprise hit and one that I find difficult to take off. 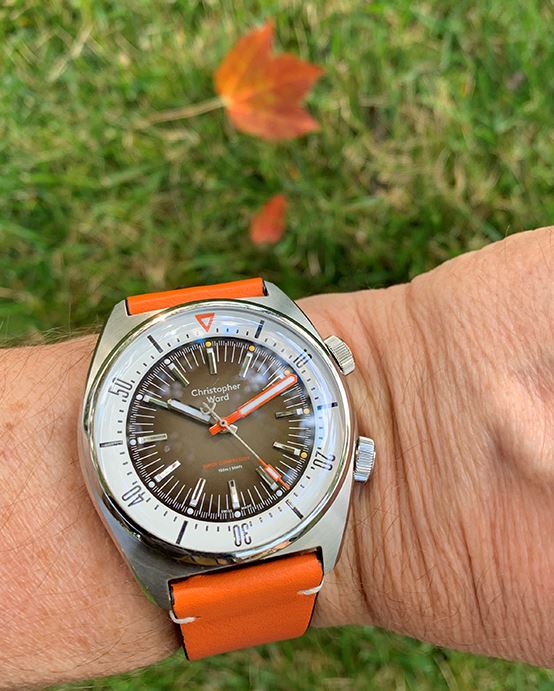