These icons in the world of timekeeping have all graced the wrist of film’s most iconic superspy, Commander James Bond, Agent 007.

And with good reason: A rugged steel sportswatch from a legendary marque is the obvious choice for someone with his proclivity for action.

A watch able to keep up with the exploits of a man who might find himself making a HALO jump at dawn, then battling henchmen in full SCUBA gear beneath the South China Sea at dusk. And if your watch can fire a steel climbing cable, transform its bezel into a buzzsaw, or act as a Geiger counter, so much the better.

And without a doubt, 007 has had some great company along the way: the Rolex Submariner (notably the 6538 and 5513), the Breitling Top Time, the Omega Seamaster 300, and even the Seiko 7549-7009 “Golden Tuna”. Capable timepieces all, they’re sought by watch collectors and Bond fans alike. But a dive watch is hardly the right choice for a black tie affair. Which brings us to a mysterious gold watch. In fact, the very first watch to appear on-screen in any Bond film.

1962’s Dr. No introduced the world to cinema’s “Bond. James Bond”. And at that London Baccarat table, we first caught a glimpse of the unknown gold dress watch peeking from under his impeccably turned cuff. Unknown, until Bond watch researcher Dell Deaton identified the watch as a Gruen Precision 510, 40-plus years after it first appeared onscreen*.

Introduced in the 1950’s, this Precision features a 17 jewel small-seconds Swiss movement, housed in a long-lugged, 34mm gold-plated case. Beautiful in its Midcentury simplicity, the Precision is reminiscent of the Patek Philippe 3445, although much more approachable. In fact, it’s thought that the Gruen was Sean Connery’s personal watch. It’s also thought that the same watch appeared in several other Connery-era films, including You Only Live Twice and Diamonds Are Forever.

As a lifelong watch enthusiast (and Bond fan), I’ve always dreamed of owning a watch from the film series, but most are priced well into the stratosphere. Yes, even the Roger Moore-era digital Seikos are beyond my means.  But the hunt goes on, hoping for the proverbial yard sale ‘barn find’. And find one I did.

Unlike some, I have a great deal of patience when it comes to collecting. Watches are a hobby for me. I truly enjoy them, however, I don’t spend a great deal on them. But when opportunity presents itself, I move.

I’ve been searching for a Gruen Precision for a few years now, and for a number of reasons. I appreciate its elegant Midcentury Modern vibe…Don Draper would have worn the hell out of this watch. It’s a true Swiss watch, without some of the pretense of high-end pieces. It’s under the radar of most 007 fans, which frankly, ups the cool factor for me. I mean, any jerk with a wad of cash can acquire a Big Crown Sub…I had to work for this. Having said that, watch sellers are getting hip to the Gruen, making the bargain baller’s job more difficult. And finally, I just wanted to have a real, grown-up, vintage men’s dress watch. It was time.

So how did I finally come upon this one? Pro Tip: Terrible eBay pictures can sometimes be your best friends. 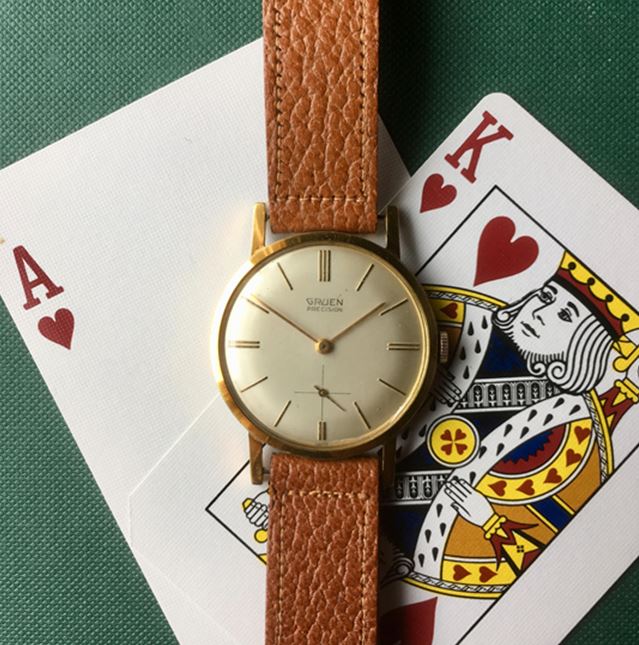 I watched this one for a few days. The listing had three not-so-great pictures, but the watch was correctly advertised as a Gruen Precision 510. What the listing failed to mention, however, were the magic words “James Bond”. Paydirt.

I watched right down to the last minute before attacking. Here’s another tip: always bid in weird amounts. Not $25. Not $50. $33.42 was all it took. Considering that thrashed versions of this watch normally go above $100, I did well. But what happened next blew me away.

The watch I received, well over 50 years old, had no right to look this good. The gold plating on watches of this vintage is almost always worn off, even on well-kept pieces, yet the wear on this is practically negligible. The case and lug edges are sharp and crisp.  The dial is clean, with no evidence of water damage or deterioration. The only knocks against its condition are a couple of small cracks in the acrylic crystal, normal for its age, and easily remedied. And wouldn’t you know it, it started ticking as soon as I turned the crown. I would expect this example to go for $500 or more. It’s a damn museum piece. And I plan to enjoy it well after I hang up my Walther.