Omega changed the Seamaster radically in 2018 and it’s hard to predict what the new version will bring. I’m quite confident that it will feature a co-axial movement, an HEV and skeleton hands but only Omega knows what the new version will actually be. Since the crystal ball isn’t too helpful it’s time we took a look at the current and previous generation of the Seamaster and see how they compare.

“Imagine a pub in any city in Britain. It’s 7:00 PM on a quiet Monday night. Two Seamasters walk in through the door. They glance at each other (as watch fans do).”

“Ha.” Said the old guy. “You’re all talk, all flash, and no class. Call yourself a Seamaster? No cat would be seen dragging you anywhere.” The stage is set for a boozy showdown…. 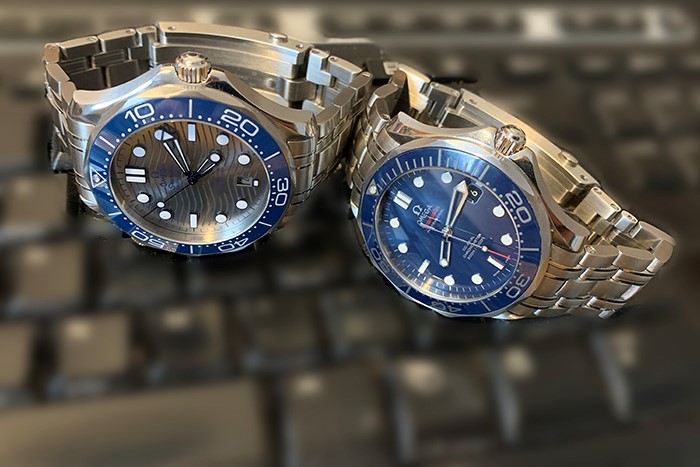 The two Seamaster 300 watches share some design DNA. They share skeleton hands, a combination of round and stick indices and a seconds hand with a lume filled pip. They are clearly closely related and the design has evolved since the original in 1993.

The Old guy (Ref. 212) has a case diameter of 41mm with a mixture of brushed and polished surfaces. The mid case is slim and curves smoothly into the lugs and into the crown guards. The helium escape valve is small, cylindrical and pokes apologetically from the case as if it is shy. The overall look is sleek, sporty and understated. This is a watch that wears smaller than its size suggests. It fits easily under a shirt cuff.

Mr. Flashy is not understated. The case has grown by 1 mm to 42mm. The mid case has become a brutal slab of brushed stainless steel that grudgingly acknowledges the presence of crown guards. The HEV has morphed into a conical feature which proudly protrudes from the case. This is not a subtle watch. It wants to be seen and admired.

“I’ve got waves carved by a laser. Beat that”. “Well, I have the nicest blue ever seen on a Seamaster and my unadorned dial just makes me classier”.

The Ref.210 returns to the wave dial first seen on the original Seamaster. Rather than use a guilloche pattern printed onto the dial the new Seamaster uses a laser to inscribe the waves deeply into the dial. This is a much more subtle effect than traditional guilloche pattern and allows Omega to inscribe [ZrO2} underneath the central pinion. The use of a zirconium dioxide/ceramic dial gives the new version a very shiny dial texture. Perhaps it works best on the white dial version but it makes for a visually exciting dial that is constantly changing due to the lighting. The older Seamaster was the first version to forgo the wave pattern. This made the dial one of the plainest in the range but also it is the dial where the true beauty of “Omega blue” was most highlighted. The blue on the dial matches the bezel very well and contrives to make this watch wear smaller and more discretely than its size would suggest. 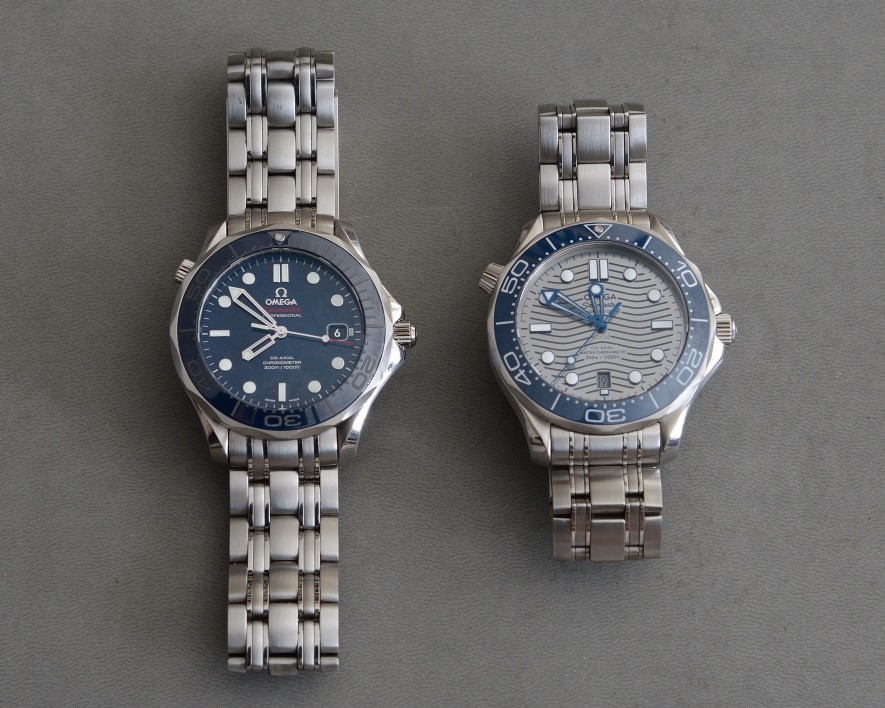 Both watches share similar designs for the indices. The 3, 6 and 9 o’clock indices are batons. The remainder are circular with the exception of the double baton at noon. The indices on the new Seamaster are slightly larger. Each index is heavily lumed with the larger indices of Mr. Flashy contributing to its slightly better lume. That said the lume on these watches is excellent. It will glow all night. It’s a shame that Omega didn’t lume the bezel on either watch.

Watches share the same familiar skeleton hand design. The lume pip on the minute hand is circular whilst the lume pip on the hour hand is triangular. The new Seamaster has slightly broader, thicker hands which have allowed Omega to put more lume on them. I would prefer to have non-skeleton hands though. Not for aesthetics, the hands on either watch look great but for a more mundane, practical version. These watches glow all night but if I look at them without my glasses I find the new version slightly easier to read because the lume pips are larger.

“Everyone can read the date on me.” Said the old guy.

Both watches have a date window. The “old guy” has a date window at 3:00 o’clock outlined in silver. The date itself is printed in silver to match the hands and date window surround. The new Seamaster has the date window at 6:00 o’clock. It is cut into the dial and has no surround. The date wheel is quite deeply recessed within the case and can be shadowed by the dial. The wheel is colour matched to the bezel. On the grey and blue version of the watch the date is quite hard to read because the contrast between the date dial and the printed date is poor. (This isn’t an issue with all Ref 210 Seamasters but as part of the case against colour matched dials this is a compelling example.)

“Yeah? I have one of the greatest movements made today. I laugh at magnets…. Bwahaha”

“Well, it might laugh at magnets but you’re no beauty.”

Mr. Flashy has a point here. The old guy has a Calibre 2500d. The Calibre 2500 was introduced with the first new generation Seamaster and wasn’t without issues. It went through four versions until the Calibre 2500d was introduced. Both movements are co-axial but the co-axial master chronometer Calibre 8800 is a masterwork of modern watchmaking. Both are great movements. The Calibre 2500d can be serviced by third parties but the Calibre 8800 can only be serviced by Omega for now. You swap easy serviceability for longer service intervals with the service interval of the Cal. 8800 being eight years but at a cost (US service cost for a Seamaster is $550). The movement is visible through the sapphire case back of the new Seamaster. It is beautifully finished but somewhat monochromatic with the swathes of polished metal broken up by a few jewels. I’d like some other colours to look at.

Alternatively, you could look at the lovely engraved case back of the old guy. It’s a shame that engraved case backs only show up on special edition Seamasters on the current generation. If Speedmasters can come with closed or open case backs why can’t Seamasters? I miss the hippocampus on the dial.

“My bracelet is nicer than yours.” said the old guy. “Nah, no one will care once they realise I have a push button micro adjust.” quipped Mr. Flashy.

Each Seamaster has the traditional, straight, un-tapered five link bracelet. Both are very comfortable to wear. Omega has tinkered with the bracelet on the new model. If you fondle the bracelet on the new model your fingers will feel some sharp edges between the links. These do not make the bracelet uncomfortable to wear and I suspect that most normal people will never notice these edges. The older model bracelet had a beautifully machined clasp with no micro-adjustment at all. This means that you might find yourself with a watch that is either too tight or too loose and unlike a broken clock it will never be right for you. Mr. Flashy also have the advantage of optional rubber straps which are amazingly comfortable.

Both watches wear very well. The new model wears a bit larger than its size would suggest. The older model is more discrete and a bit slimmer. They could both be a “one-watch” collection fitting under a shirt cuff and having 300m water resistance. The “old guy” is dressier. Mr. Flashy is flashier and calls attention to itself through the sunburst and the white numbers on the bezel. Both are definitely Seamasters. They could be nothing else. They both could easily go from the beach to the boardroom and not be out of place in either scenario. 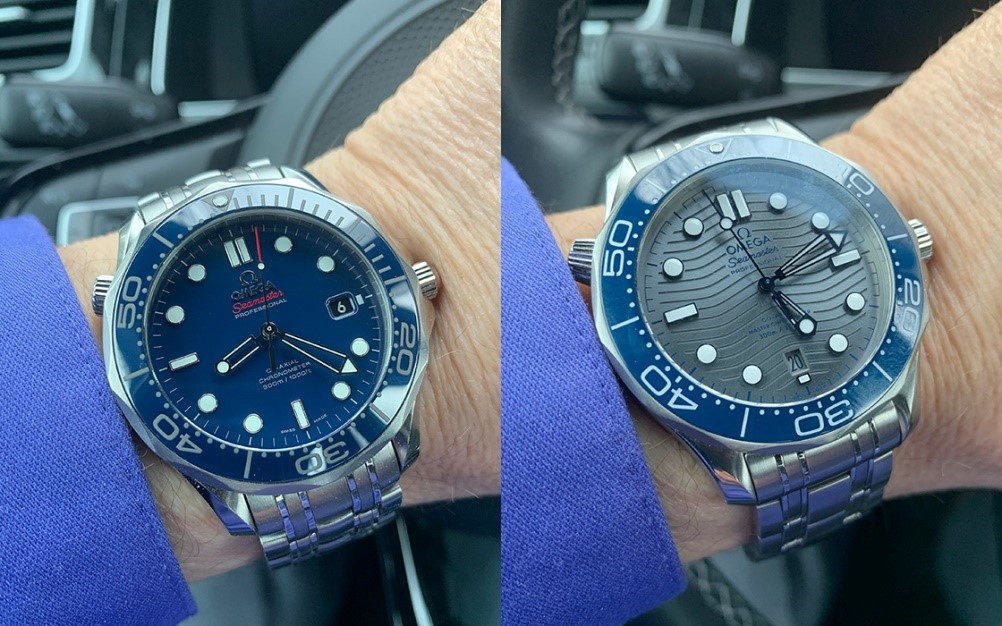 For a very long time the Reference 212. 30.41.20.03.001 was my grail watch. I loved the blue colour and the bracelet. It seemed perfect to me. Then I bought one. Then I didn’t wear it for a year because of the lack of micro adjustment. I eventually gave in and bought a modern Omega clasp from the new generation of watches. Now the old guy fits me fine even if it does have a huge clasp that still feels out of place even though it fits perfectly.

When the new generation of Seamasters was released in 2018 I fell in love with the blue/grey version. It has all of the Seamaster DNA with a cutting edge automatic movement. It’s a watch to wear when you want to show off. It’s as bold as brass and twice as confident. The new version will try to wear you if you let it. The old version will whisper compliments in your ear whilst sitting smugly on the wrist.

Should you buy one? Well, these are both very competent dive watches. They are probably both more at home desk-diving even though they can do so much more. They are also Seamasters so if you hate HEVs you’re not going to buy one. The new Ref 210. Seamaster has a lot of different variants and is easily available. The old version is more subtle, dressy rather than flashy and will surely become a classic.

“You’re both wrong,” drawled a voice from the corner. “I’m the greatest dive watch ever made.” There in the darkness, surrounded by fawning fan boys and simpering sycophants, sat a Submariner. The two Seamasters looked at each other. “Well, Dad,” said Mr. Flashy, “finally something we can agree on.” The old guy nodded slowly. They looked at each other, winked and proceeded to beat the living daylights out of it.