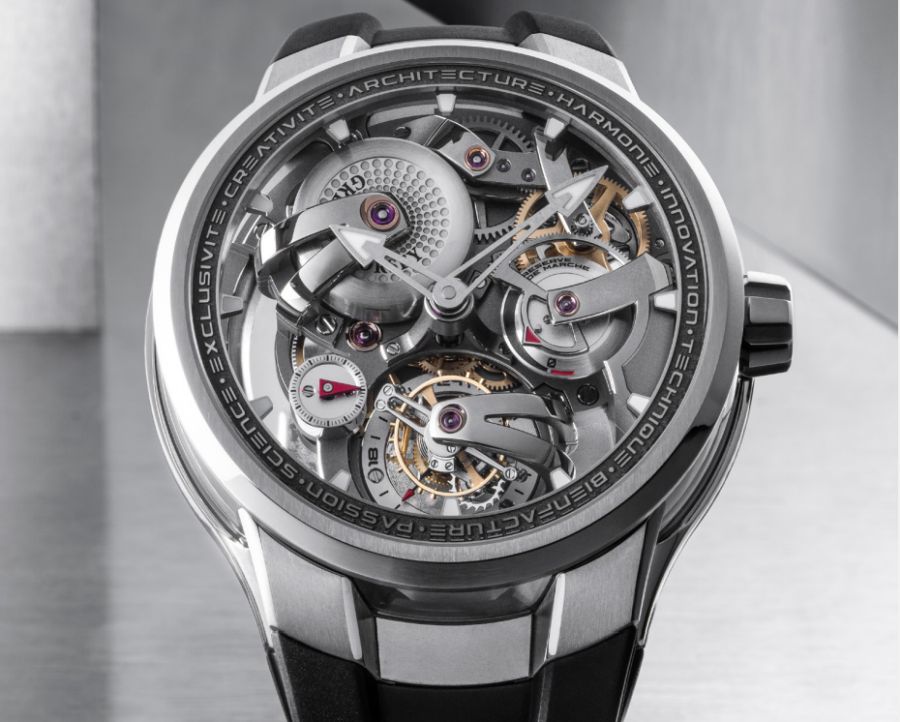 You’ve seen the above picture. So where in this watches’ little world should we start? Greubel Forsey is a combination of the names of two genius watchmaker inventors Robert Greubel and Stephen Forsey, who started out wanting to sell their creations to other brands, but circumstances made them decide to go at it themselves. The brand was launched in 2004 and since then has made a name for reimagining existing complications, making them more impressive and incorporating them in unique designs. This desire to reinvent the wheel was there from the start with their first joined invention, the double tourbillon 30 degrees, being presented at Basel World in 2004. The brands’ unquenching desire to innovate has produced masterpieces like the Quadruple Tourbillon, the Double Balancier, and the Mechanical Computer of the QP à Équation. Today they have introduced another. The Tourbillon 24 Secondes Architecture is unlike any Greubel Forsey timepiece ever created, featuring a new caliber, two patents, and a case design & construction that showcases their movement like no other. 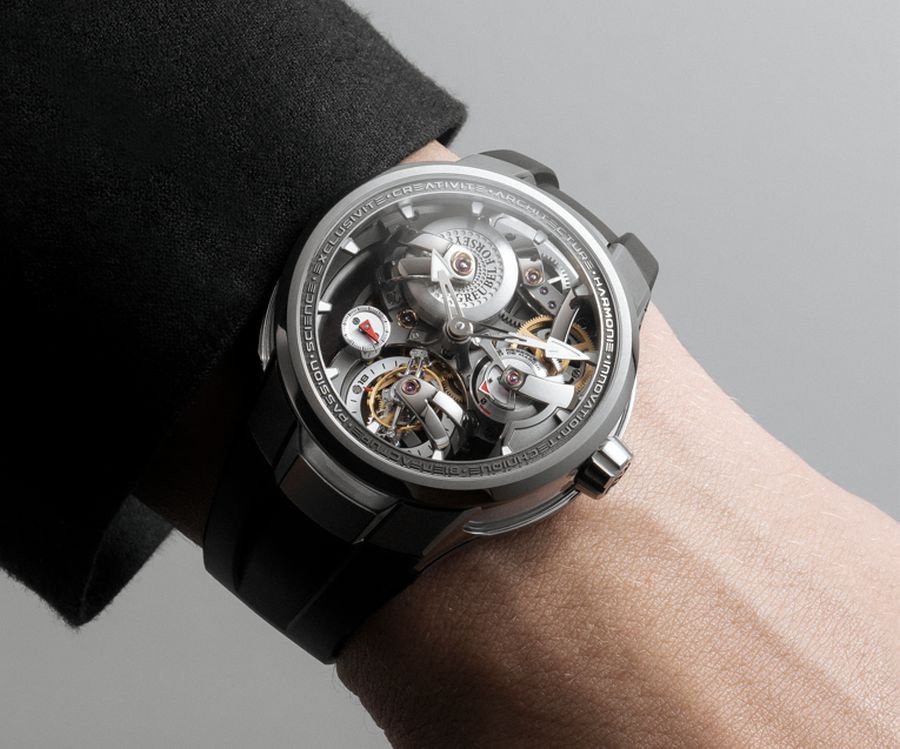 The Tourbillon 24 Secondes Architecture has become part of Greubel Forsey’s Convex collection, created by CEO Antonio Calce to attract new collectors, and future-proofing the brand; thus, this has the collections signature convex shape, constructed from grade 5 titanium, with a 47mm diameter around the case back and a 45 mm bezel. This size configuration gives enough volume to fully showcase the 3-dimensional architecture of the movement within while giving the impression of being significantly smaller than it actually is. Also helping in its wearability are the compact lugs that flow out of the case back and seamlessly integrate with the rubber strap. Don’t take me wrong, this is still a large piece especially when you factor in the 16.80mm height but would you take a smaller watch over having all this watchmaking goodness on the writ? I most definitely wouldn’t! 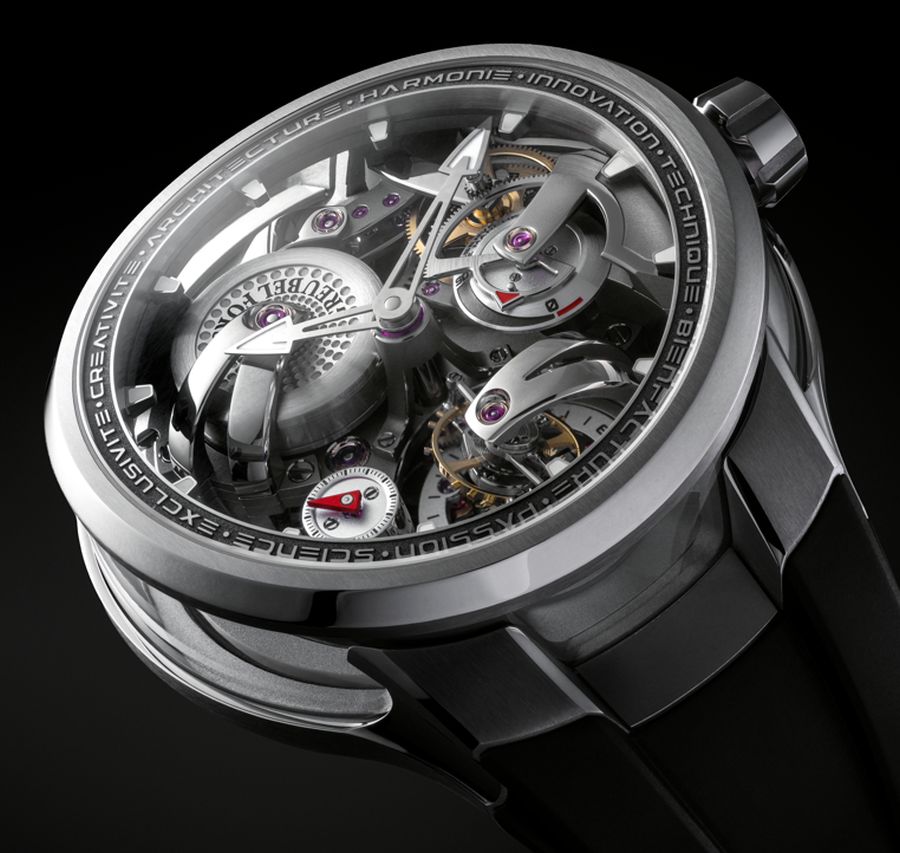 The case is dressed in straight graining and polishing that’s been done by hand. The hand finishing prowess of Greubel Forsey’s watchmakers is on greater display in the movement but none of it could be appreciated to the extent this piece allows it to be if not for the synthetic sapphire crystal over the entire periphery of the case. The first watch that I remember seeing from Greubel Forsey was the GMT and I really liked the use of a sapphire “port hole” to accentuate the 3dness of its rotating globe. So, I am very much a fan of this new transparent look, never done by GF, which reveals the full complexity of the architecture of this caliber’s 354 parts. There’s also a display case back and a non-obstructive dial design. Noting is left to the imagination. My favorite area is in between the lugs at 6 o’clock where we can see the Tourbillon 24 Secondes doing its thing. What thing is that? 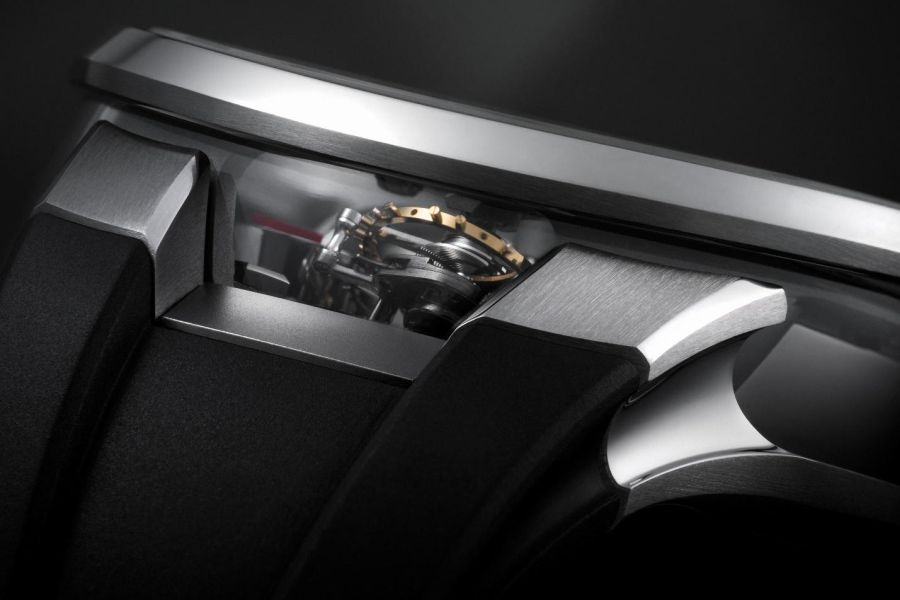 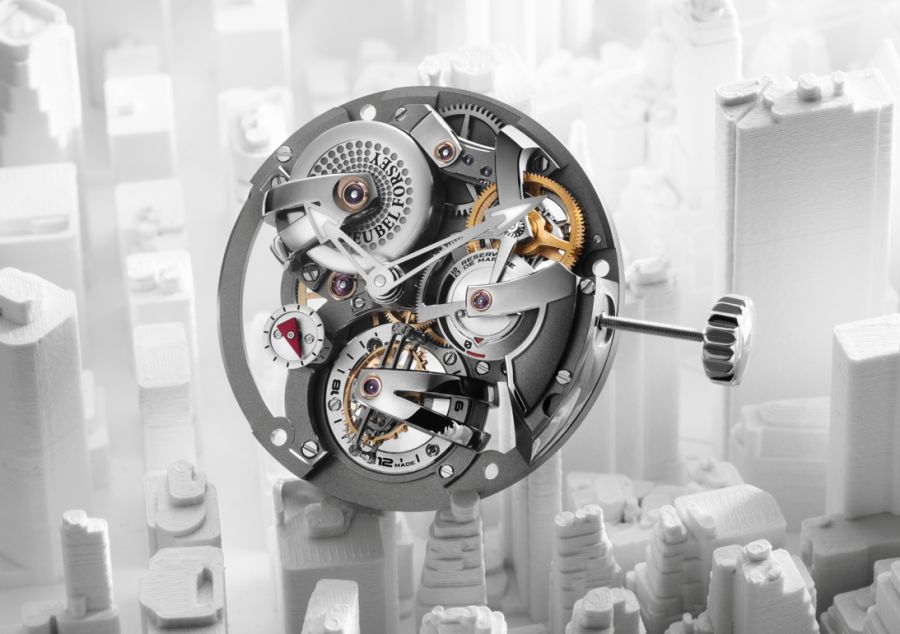 This tourbillon mechanism is an evolution of the brand’s first invention. Something that prompted the original creation was a comment the two watchmakers heard in watchmaking school about how everything had been invented. Greubel Forsey’s existence shows that there are still a good few things to be done before that’s true. This creation is located at 6 o’clock, secured from a large spherical and open-worked bridge. In its form, the inclined escapement defies gravity, while in its function, it compensates for it. To solve the problem of critical positions of the oscillator in relation to gravity, the Tourbillon 24 Secondes uses a fast rotation speed in addition to a 25° inclination. These two elements combined contribute to excellent chronometric performance. A 24-second scale is located beneath it with a red-tipped hand to mark the seconds. 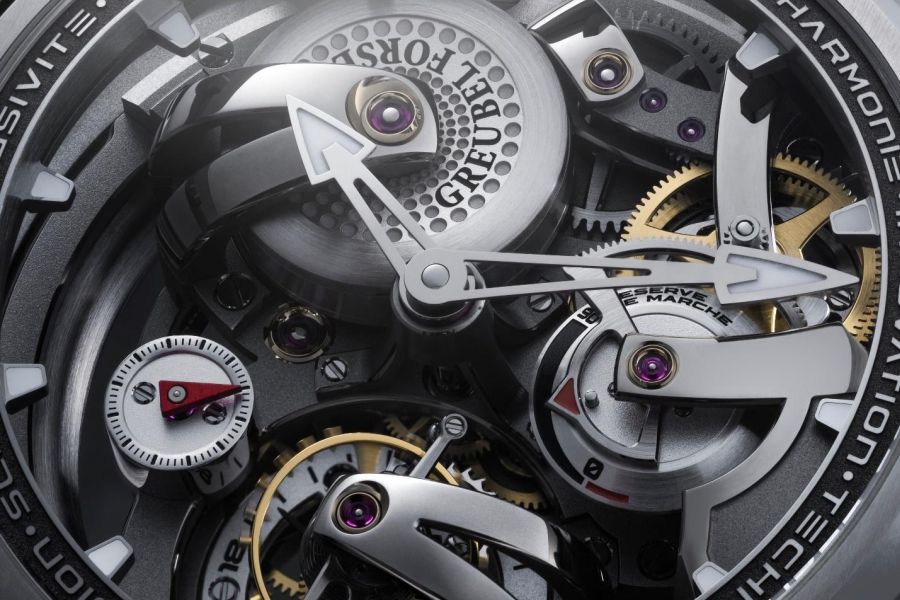 If we continue our tour of this city we’ll wind the power reserve indicator, indicated by a red triangle, which gets its readings from the barrel at 10 o’clock is cover is engraved, lacquered and circular-grained and contains three coaxial series-coupled fast-rotating barrels that hold 90 hours of power reserve. With the dial being the movement, how do you tell the time? Protruding from the center of the dial, like a skyscraper, Greubel Forsey’s signature tripod bridge holds two open-worked and curved arrow hands, to accommodate the curved bezel and crystal, that point towards trapezoid indices on the inner periphery of the case. The time-telling is completed at 8 o’clock by a small second. On Thursday’s show we will be going in-depth on the finishing of this titanium movement with Michel Nydegger, Head of Marketing and Communications for Greubel Forsey, so stay tuned to hear how they combine hundred-year-old technics with their in-house developed methods. 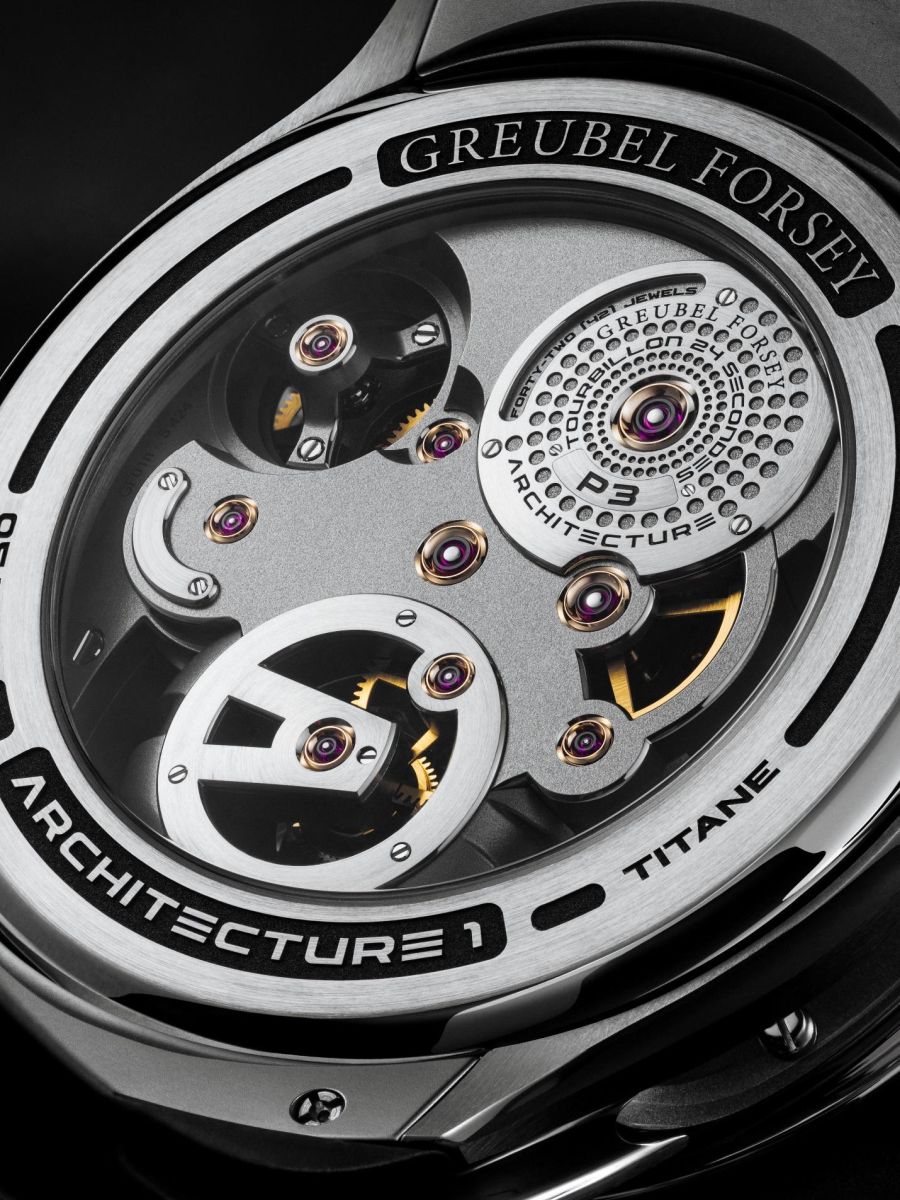 If I had to introduce someone to GF by using other brands, I’d say that their designs are as daring as Richard Mille but better, at least in my eyes, hand finished to the standards of Philippe Dufour, and as ingenious as only they can so go have a look. Praise like that doesn’t come even remotely to be cheap or in great amounts of availability. The Tourbillon 24 Secondes Architecture retails for $500,000 and will be limited to only 11 pieces in 2022, then to 18 pieces a year between 2023 and 2025 for a total of 65 exclusive timepieces overall. 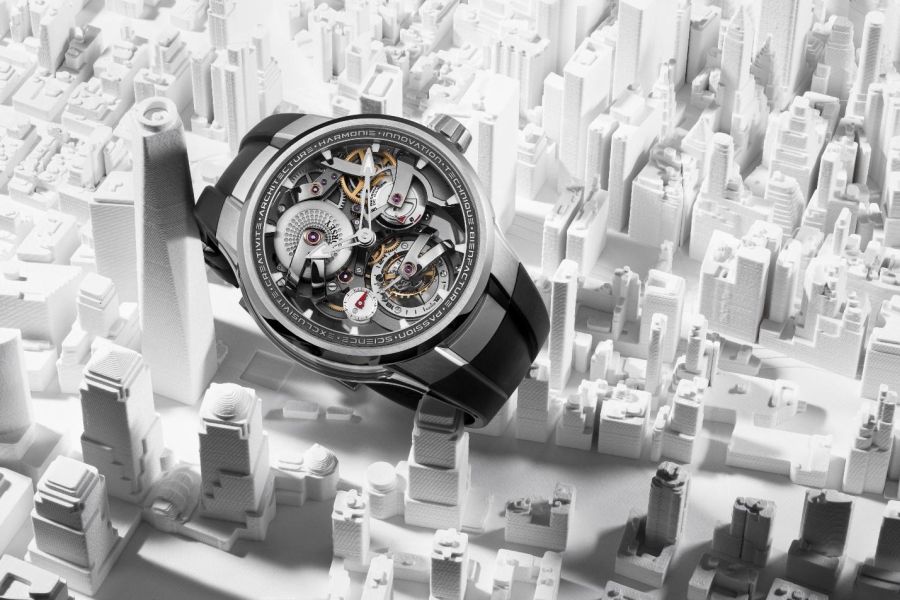